Cell Based Assays – Seeing the light 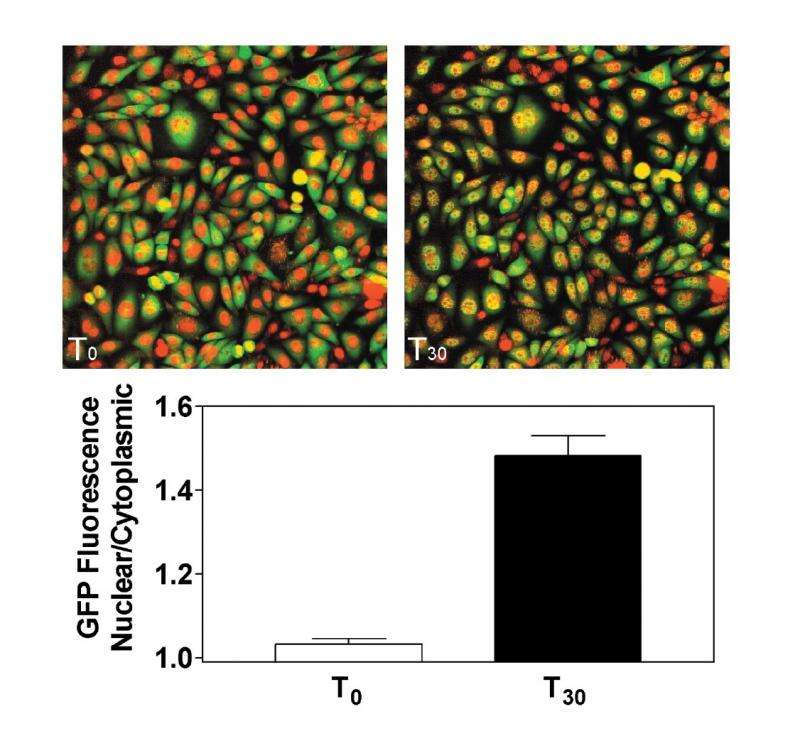 Cell Based Assays – Seeing the light

High-context cell assays have the potential to take the pivotal role in the drug discovery process. So what are the features of today’s leading edge cell based assay technologies and where does the future lie?

We live in interesting times. On one hand the completion of sequencing of the human genome presents the drug discovery community with a wealth of new potential targets, biological questions to ask and problems to solve (1); while on the other hand many new and increasingly sophisticated technologies are being developed which allow these new questions to be asked with the reasonable prospect of getting an answer.

Many technologies originally developed for automation of HTS (high density microplates, robotics, automated liquid handling, laboratory information software, etc) have been exported and applied in other disciplines to bring a factory approach to high-throughput biology in genomics (2). This process has now come full circle with the fruits of this work now re-entering the drug discovery process as new targets in search of validation and drug screening assays. While this wealth of new prospects brings the promise of new targets, it also brings uncertainties.

It has been estimated that costs for developing drugs for new targets emerging from the Human Genome Project will be significantly greater than for established targets (3), where costs are already considered to be excessive by many. These new targets will require validation, and for targets outside of those molecular classes and cellular processes currently familiar to the pharmaceutical industry, may also require new assays and assay technologies.

So it is therefore somewhat ironic that those technologies originally designed to remove bottlenecks in drug screening, having been taken outside and applied to genomics, are now contributing to the generation of a new bottleneck in the postgenomic era. As little as one or two years ago all focus on bottlenecks in drug discovery was on processes downstream of primary screening in secondary screening and ADME-Tox (4), and developments in solution and cell-based screening technologies were evaluated against their place and potential in the classical linear drug discovery pathway (5,6).

Today as technologies and biological discoveries advance on parallel fronts, the demands of functional genomics and target validation are clearly joint contenders for the most significant bottleneck in rapidly advancing the development of new drugs.

Where do cell based assays fit into today’s drug discovery process? At one level, particularly for primary drug screening, cellular assays can be viewed solely as a means to an end (7). If a cell assay enables a target to be screened in a more efficient manner than a solution assay, then the cell assay is a viable approach, even if in this context the cell is in fact merely a conveniently pre-packaged collection of assay components.

While this approach may be enabling in certain aspects of HTS, it ignores the fundamental potential of a cell based assay to characterise, analyse and screen a drug target in situ and in context.

Many processes in drug discovery, while all addressing aspects of the same biological continuum, operate independently, often using different assay systems and technologies. While this situation may be a pragmatic result of technological reality, it is not an efficient process. Recent and continuing developments in technology have provided drug discovery with an increasingly powerful armoury of tools to dissect biological processes. Today many of these tools can be used in conjunction with live cells on a variety of instrument platforms that together span a technology continuum across biology and drug discovery from genotype to phenotype to screenotype (8).

Consequently with these tools researchers in different disciplines can begin to use the same sets of tools to perform complex multiparameter assays for target validation and screen development using live cell assays. They also have the ability to transfer the same assay readout into a robust high throughput screening format, and to return screening hits for further characterisation. Consequently, high-context cell assays have the potential to take a pivotal role in the drug discovery process in applying high-quality criteria to inputs from high-quantity activities (Figure 1). 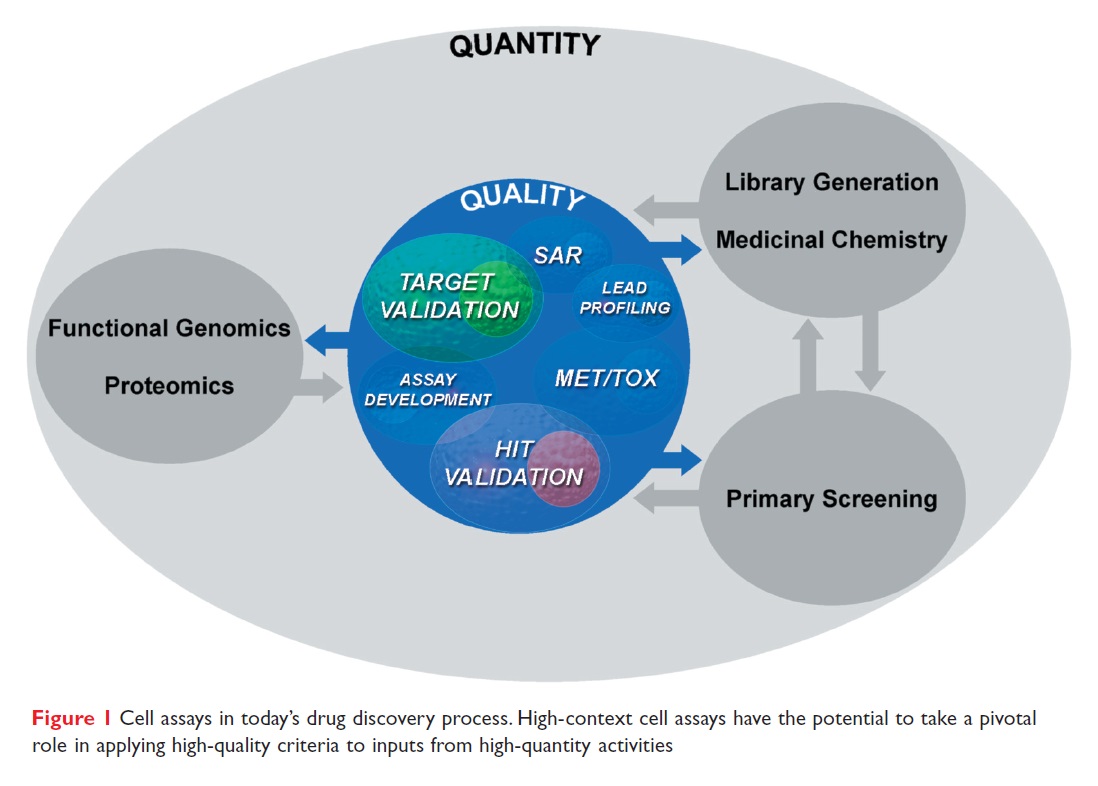 What are the features of leading edge cell based assay technologies that enable this continuum? Today, fluorescence technologies predominate, and many technologies based on reporter gene assays (9), ion channel probes (10) and green fluorescent protein (GFP) (11,12) are in widespread use.

While these basic tools remain valuable, further developments of these and other probes, coupled with advances in instrumentation are extending the capabilities of cell analysis systems for target validation and drug discovery. Today’s fluorescent probes and reporter technologies with the greatest potential for enabling a biology and technology continuum share a number of common characteristics: 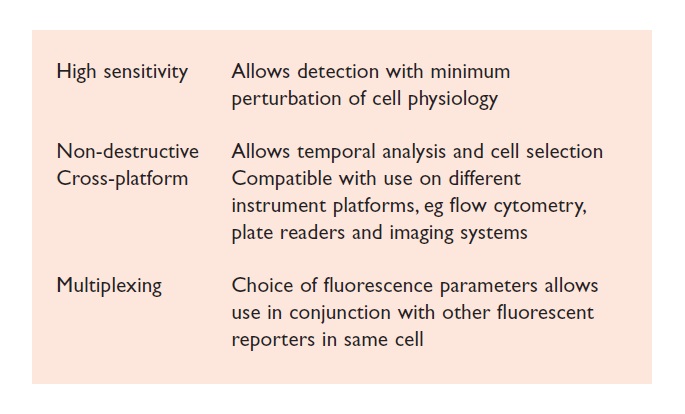 Such fluorescence reporters available today and in development by a number of companies, will permit the design of live cell assays with the ability to analyse individual biological responses across cell populations, to track the movement of molecules within cells, to correlate responses with cell cycle position or other inherent cellular parameters, and to analyse two or more independent assay readouts from the same cell. Coupled with appropriate hardware and analysis software these reagents will allow this level of sophistication to be achieved in high throughput with robust assay performance.

In what today may be viewed as the traditional heartland of cell based drug discovery assays, two relatively mature technologies, FLIPR™ (Molecular Devices) and VIPR™ (Aurora Biosciences) are used extensively for screening GPCR (13) and ion channel targets (14) using calcium and voltage sensitive fluorescent probes. These assays are based on measurement by macro imaging and consequently yield data at the cell population level; fully exploiting the potential of cell based assays requires the ability to acquire data at the cellular and sub-cellular level.

The most significant advance in realising the potential of cell assay technologies has been the development of high-resolution, high-throughput imaging systems which are capable of multicolour detection of fluorescence reporters in fixed and live cells. The ArrayScan™ from Cellomics (15) is a first-generation example of microscope imaging adapted to a high-throughput platform for ‘highcontent screening’.

The ArrayScan has been applied to analysis of GPCR internalisation (16) and a number of other applications (17), with the majority of assays being performed on fixed cells. A further development of this platform, the ArrayScan Kinetic, has been designed to extend the capabilities of the system for live cell assays. Further cell based platforms have been developed by Acumen and others (18).

The most recently developed cell analysis platform, the IN Cell analyser (19,20), from Amersham Biosciences, is a line scanning confocal cell imaging platform capable of high-speed simultaneous threecolour fluorescence image acquisition and analysis from live cells in 96 and 384 well microplates.

These high-throughput cell imaging systems have the potential to address a broad coverage of the drug discovery process from functional genomics to secondary screening and beyond (Figure 2). 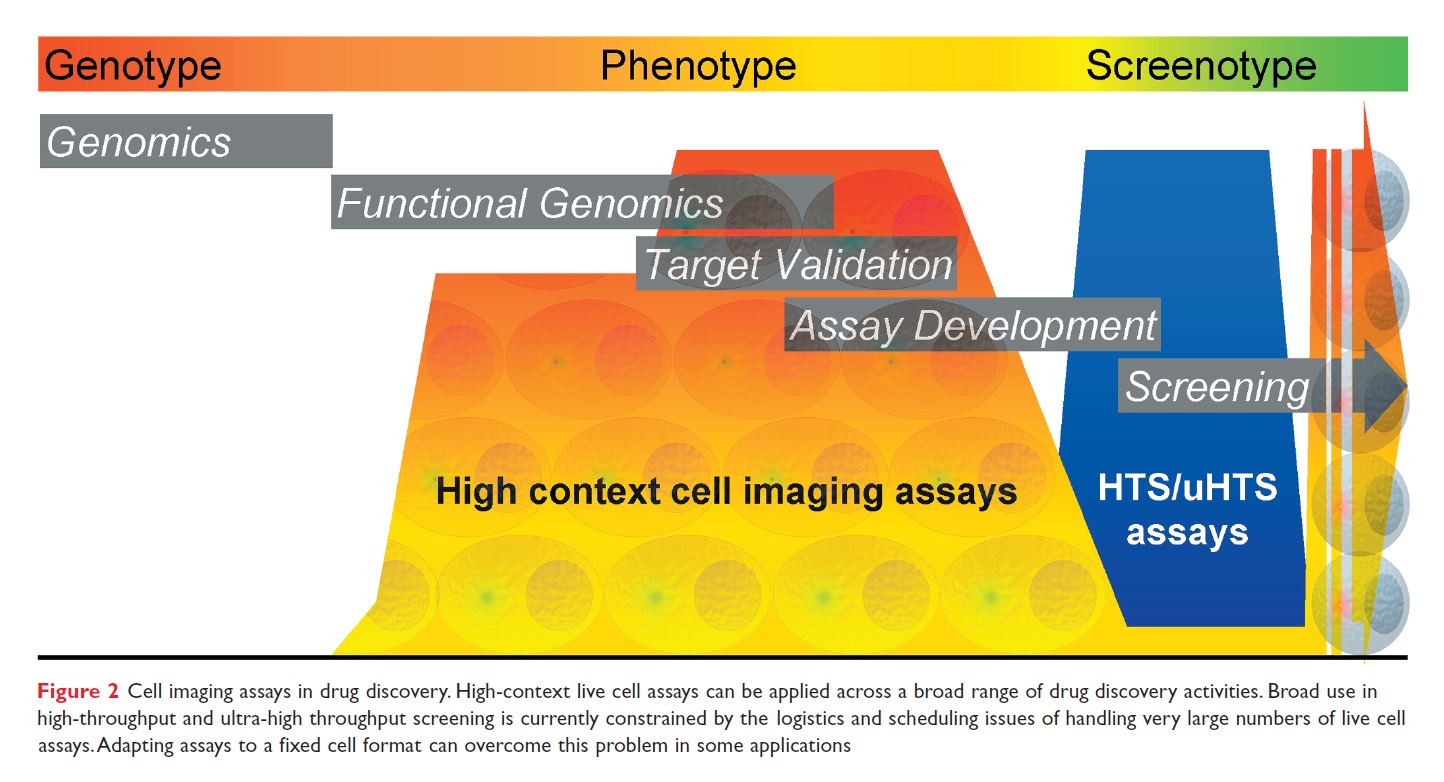 Development of intrinsic and extrinsic fluorescent probes for cellular assays is a rapidly advancing area, and is being pursued in many biosciences companies and academic laboratories. One of the largest areas of continuing development is in applications of GFP, and other more recently isolated new fluorescent proteins (NFPs) (21) being developed by Clontech and others, which will undoubtedly allow the development of increasingly advanced live cell assays.

Recent agreements and collaborations between Aurora, Amersham Biosciences and the Danish biotech BioImage A/S, have resulted in the development of a range of GFP assays to analyse key intracellular signalling pathways by following the redistribution of GFP fusion proteins in live cells in real time (22) (Figure 3). 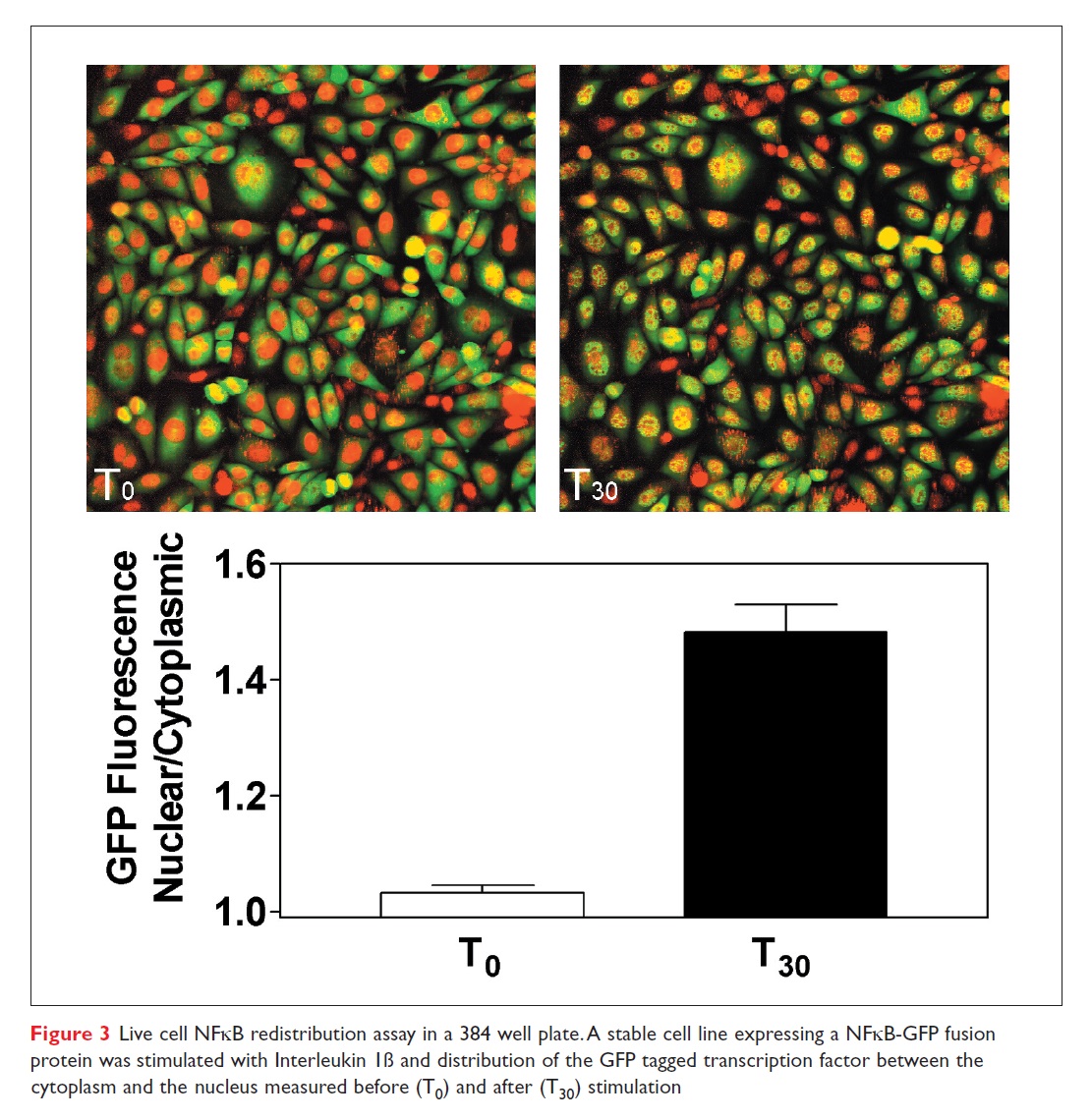 These types of assays will see libraries of cell lines engineered to report on key cellular processes become standard robust tools for drug discovery (23). The combination of GFP with high-throughput subcellular imaging offers a powerful and generic approach to monitoring intracellular events, and has recently been used to great effect in GPCR assays by Norak (24).

As high-throughput imaging instrumentation continues to advance, further developments of intrinsic biosensors (25,26) based on GFP and NFPs offer the potential to monitor protein:protein interactions directly in real time and space. The ability to follow cellular protein connections in situ is a key area for further development of target validation and screening assays and a number of approaches show promise (27), including methods based on enzyme reassembly or complementation such as the DHFR system developed by Odyssey (28).

Advances in intrinsic biosensors are paralleled by developments in extrinsic probes and reporters (29). Reporter gene assays continue to be refined and made compatible with non-destructive assays. Aurora’s GeneBLAzer™ system was the first to allow gene expression control to be analysed in living cells using different detection platforms, including FACS isolation of responsive cells (30).

More recently, Amersham Biosciences has developed a live cell reporter gene system based on its core Cyanine dye technology. The nitroreductase gene reporter system (31) uses CytoCy substrates in which enzyme activation is independent of the chromophore. This allows fluorescent substrates to be designed in a range of colours to allow matching to different instrumentation and multiplexing with other cellular reporters, including GFP. Further development of Cyanine dyes as cellular probes include CypHer™5 (32), a pH sensitive analogue of Cy™5 which allows imaging of internalisation of GPCRs and other cell surface receptors in multiplexed assays with GFP.

A next generation of extrinsic cellular sensors based on site-specific labelling of recombinant proteins (33) or protein domain ligation (34) have the potential to provide tools for directly visualising cellular events that, for reasons of steric hindrance, are refractory to the use of large fluorescent protein labels such as GFP. These techniques will also permit the use of new fluors, and new combinations of fluors, and allow a wider range of fluorescence detection techniques, including timeresolved, lifetime and polarisation to be applied to cellular assays.

Coupled with advances in imaging hardware such sensors may also come into play in dissecting cellular processes at even finer detail through single molecule detection (35). Further scope for multiplexed analyses is provided by new classes of inorganic fluors based on nano-crystals and quantum dots (36) which offer extremely photostable narrow bandwidth labels.

Of course, fluorescence is not the only method of monitoring cellular events and as technologies advance other modes of detection will be employed alongside fluorescence assays, including electronic methods based on electrode arrays such as those produced by Panasonic (37), and cell-transistors (38). Fully exploiting the potential of cell assays will also require the implementation of other complementary technologies which allow precise engineering of cell phenotypes on a transient or permanent basis by modulating protein expression in target cells (39,40).

It is self evident that cellular assays are only as powerful as the available probes and reporters. Full integration of increasingly sophisticated cell analysis tools with enabling hardware will allow advancement of target validation and screening from ‘high-content’ to ‘high-context’, and provide a technology continuum to address biological questions from phenotype to screenotype. Making and using these tools to unravel the interacting networks (41,42) of biological systems using cell assays offers an ongoing challenge. We will continue to live in interesting times. DDW


Acknowledgement
The author would like to thank Angela Williams, Cell Biology Department, Amersham Biosciences, for providing the data in Figure 3.

Dr Nick Thomas is a Staff Scientist in the Cellular Sciences research group of Amersham Biosciences based in Cardiff, UK. He is currently working on a number of projects developing novel fluorescent probes and reporters for use in live cells for target validation and drug screening.

References
1 Bumol, TF and Watanabe, AM. Genetic Information, Genomic Technologies and the Future of Drug Discovery. Journal of the American Medical Association 2001 285:551-555.

38 Offenhausser, A and Knoll, W. Cell-transistor hybrid systems and their potential applications. Trends in Biotechnology 2001 19(2):62- 66.