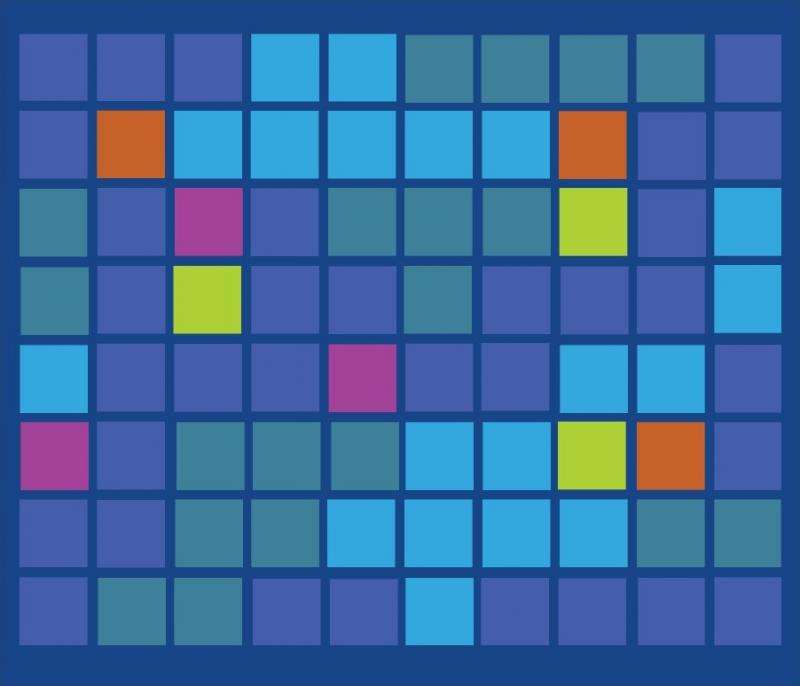 While producing targets was once the bottleneck in the drug discovery process, in the post-genomic era this has been superseded by the requirement for high-quality lead structures.

As a result of the pool of genomic data and countless unvalidated targets now available, researchers are finding that combinatorial chemistry and high-throughput screening (HTS) against compound libraries are no longer the most cost-effective and time-saving approaches to lead identification.

Chemical microarrays, a new type of chip technology, provide a shortcut in the drug discovery process by bypassing conventional target validation, resulting in faster and more efficient research of the interactions of targets with small molecules.

A crossroads in science has been reached: the Human Genome Project, once considered a pie-in-the-sky venture, has been completed. With the knowledge obtained, a large number of novel therapeutic targets have been identified. These are based, in part, on chromosome location and disease association. However, moving these genomic targets into drug discovery programmes is often hampered by the lack of detailed biochemical information about their function. The onus on scientists now is to focus on methods to efficiently screen for new drug candidates even when the target is not completely defined.

The field of chemical genetics has grown up around the need to identify these targets. Chemical genetics describes the use of small synthetic molecules which elicit a phenotypic change by direct protein interaction to identify the key genes involved in the pathway of interest. In many cases, existing drugs are used as the chemical probes whose overall effect is well established, but whose overall effect is not understood.

Chemical microarrays are ideal tools to accomplish this gene functional analysis in that they offer the possibility to analyse thousands of small molecule ligands simultaneously in a single experiment (1). Based on the concepts of miniaturisation, integration and parallel-processing techniques that were used in the computer industry, this technology is now revolutionising genomics, drug development, environmental monitoring and clinical diagnostics, in much the same way as the microprocessor transformed the computer industry.

The reasons underlying the success of this technology are its improved performance, higher throughput, lower cost, portability and automation. In many situations, these microarrays are being referred to as a ‘lab-on-a-chip’ (2).

DNA microarray chips are in widespread use as a tool in functional genetics. The entire genomic activity of cells and tissues can be analysed and compared on single slides, or gene chips. These chips are fabricated by high-speed robotics, generally on glass but sometimes on nylon substrates, for which probes with known identity are used to determine complementary binding, thus allowing massively parallel gene expression and gene discovery studies.

The idea of the protein microarray is not new; preliminary experiments in this arena were done in the 1980s. There are two main objectives for proteomic research:

So, what are the functional steps of the chemical genomic process?

The microarray process is rapidly developing to shorten the process and make it more reliable. In a ‘conventional’ experiment, if such an experiment exists, the steps involve (3): These steps can be summarised to creating the information and then interpreting and using the information to speed the drug discovery process.

For drug discovery purposes, microarrays chip technology can be modified to include chemical compounds immobilised on the chip surface. Such a system provides a platform for the assessment of drug-target interactions in a highly parallel fashion. This type of assessment allows for quantitative comparisons early in the discovery process and to empirically determine the biological utility and potential for therapeutics of poorly characterised disease-associated proteins (4,5). In this case, the probes are drug fragments, created in ‘libraries’ of related structures and the probes are targets for the drugs fragments.

Development of the drug fragment libraries

The generation of chemical microarrays for large-scale drug discovery involves parallel synthesis of chemical compounds in a miniaturised format. Synthesis may occur on the nanoscale level with a batch sizes in the range of 10,000 for each compound. The goals of the synthesis process are minimisation of array-to-array variations and mass production of the arrays so that multiple parallel experiments may be carried out.

The first step involves development of lowmolecular weight small drug fragment libraries for use in the chemical microarrays. Drug fragments are smaller in size and weaker in both binding and activity than typical drug-like compounds. Nevertheless, drug fragments are sufficiently diverse and information-rich enough to provide for straightforward compound development strategies.

The binding probability for fragments is not as low as for highly complex and large molecules, where many groups may disturb the fit into the binding site of the protein and conceal inherent favourable features in other parts of the molecule. The relative contribution to receptor binding on a per-atom basis is observed to be higher for smaller structures (6).

Data analysis and establishment of structure- affinity relationships is simpler for very small molecules. Improvement of the hits initially seen and development of compounds with higher potency is facilitated by acquiring structural affinity relationship information (7). In addition, having small lead compounds allows for the addition of chemical groups in the optimisation process so that the final goals of potency, selectivity and favourable pharmacokinetics can be achieved in the development of each new drug (8).

If these fragments are designed into families of similar structures, insight about relevant structural features is gained early in the process and optimisation of the process is facilitated. The microarrays can be used to assess groups of target and reference (non-target) proteins so that selectivity relationships of small molecules with the target class of interest can be built. Low-affinity screening using tethered drug fragment molecules on chemical microarrays is a highly promising approach for the rapid discovery and optimisation of small molecules in a chemical universe of endless possibilities.

Development of the chip

The microarray technology for studying these protein-ligand interactions has held great promise in that multiple parallel experiments can be completed efficiently, generating large banks of data. However, in many hands, the surface chemistry of the chip has been ill-defined and, therefore, a substantial degree of unspecific binding has been noted.

In many cases, coating the chip with a substance such as gold or silicon serves to eliminate this background ‘noise’ that will develop in the analysis of the binding patterns and will subsequently prevent detection of subtle structure- affinity relationships (9). Immobilisation techniques for the drug fragments to be tested are also important to measure specific relationships. This technique should be optimised to prevent unspecific binding of proteins to the surface array layer of the chip and to present the ligands for protein binding.

Each chip must be validated with known pairs of interacting molecules such as receptor:ligand or antigen:antibody. These experiments prove that interactions between proteins and ligands of low molecular weight and weak affinities can be specifically detected. Every protein presented provides a characteristic fingerprint against the compound collection presented on the chip. Analysis of these fingerprints indicates the next steps to be taken in the drug development method.

To produce the microarrays on the chips, the low molecular weight chemical compounds are transferred by spotting nanoliter volumes on to the sensor fields. In other hands, this process is accomplished by hotolithography, pipette, drop-touch and piezoelectric methods. This step is highly automated to provide reproducibility in a mass-production environment. Positive and negative controls should be included to provide veracity of the process (Figure 1). 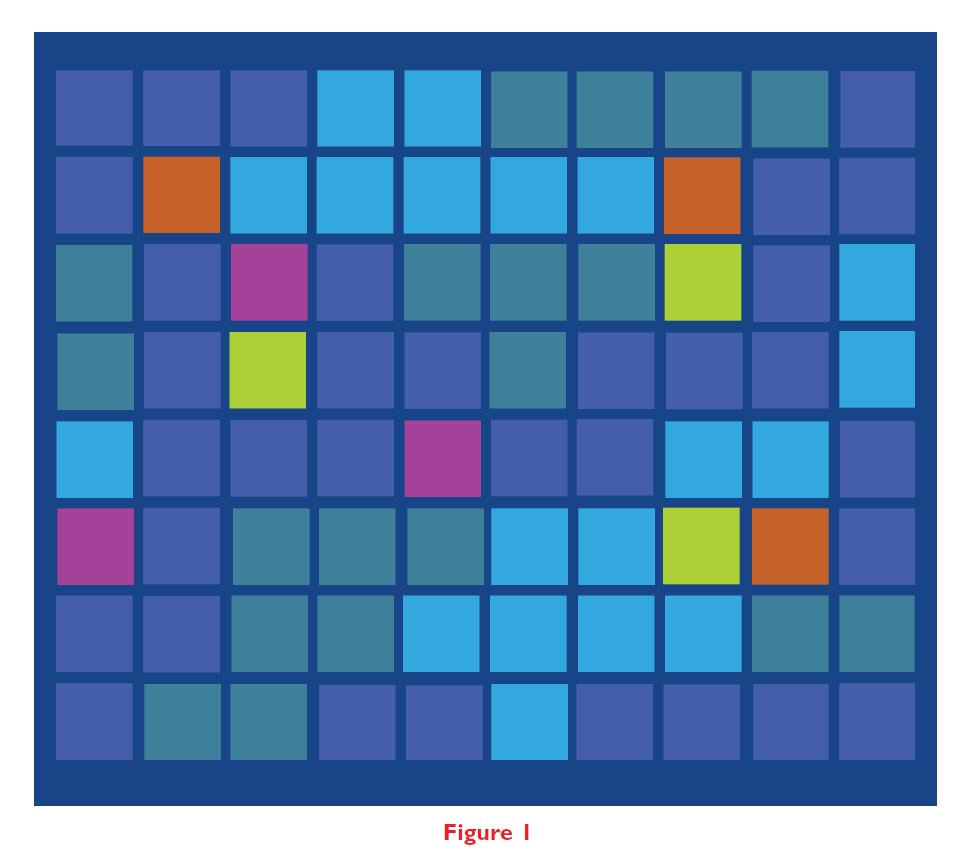 Analysis of the information

The analysis of the interactions between large numbers of novel proteins that have been generated through genomic approaches and their specific ligands involves examination of the microarrays in a parallel fashion. Traditionally, this type of analysis would have been done using a proteinbinding assay. These experiments are costly to develop and, when in use, are extremely timeconsuming. Label-free detection systems provide a significant improvement to this design.

Until recently, however, these systems were designed to analyse only small numbers of single protein:ligand interactions in separate channels (10). The Plasmon Imager has been developed to overcome this constraint. It makes parallel label-free binding detection possible. This imager measures the shift in the resonance pattern between bound and unbound compounds. The larger the resonance shift, the higher the binding affinity. Newer models of this instrument can measure the binding patterns of up to 1,536 compounds on the sensor (Figure 2). 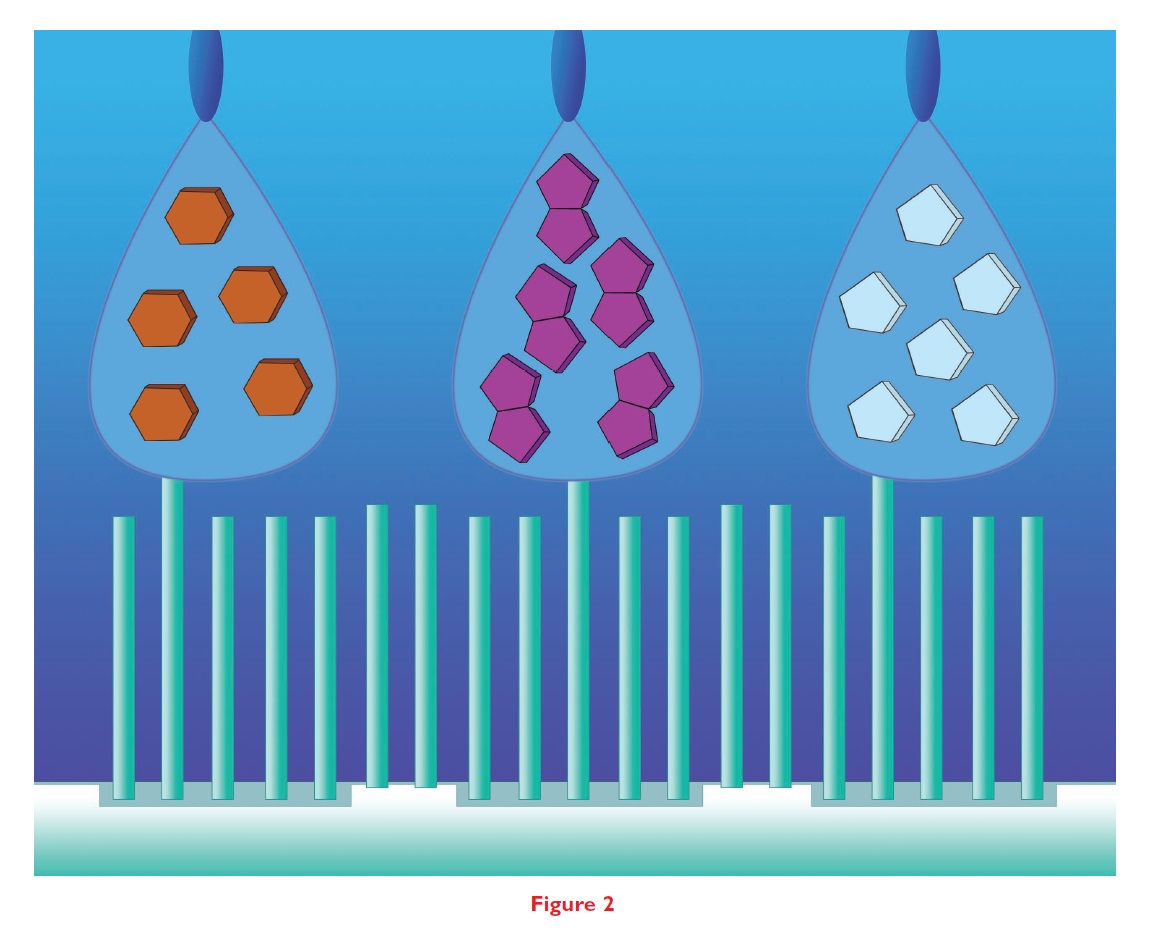 Making sense of the information

As each protein is exposed to a different compound library, characteristic fingerprints for each protein are obtained. Comparison of different fingerprints will allow classification and functional assignment of proteins that may be as yet uncharacterised. Software has been developed by many sources for database-assisted DNA microarray analysis (11).

Since drug discovery platforms are a relatively new application of microarrays, the data analysis systems are largely proprietary. These software packages allow one to organises one’s data into customised databases or modelling and chemoinformatics applications for a functional genomics approach.

Chemogenomic drug discovery is an emerging new field in which small molecule leads, identified for one member of a gene family, are used to elucidate the function and biological role of another member of that family whose function is not known, as well as potential drug leads. Chemical genomics represents a new approach to target identification and drug development with potential for dramatically accelerating the process.

The microarray technology platform shows huge promise in dramatically increasing the efficiency of the analysis of thousands of unknown cDNAs and their associated proteins. Coupled with a function-blind, label-free imaging system that is based on the interaction between target proteins and small information-rich leadlike molecules, this technology bridges the gap between the introduction of raw genetic information and the development of pharmacologically useful substances. DDW

This article originally featured in the DDW Spring 2002 Issue

Elaine Seeskin, principal of Biocom Healthmultimedia, has been a medical and scientific journalist since 1988. Supported by a research background in biochemistry, immunology and genetics, as well as a clinical degree and experience, Elaine brings a unique perspective to her role as a writer and consultant. Her work has appeared in all media, from print to web to Internet and CDRom programming. She serves as an advisor to healthcare companies in St Louis, across the USA and around the world.