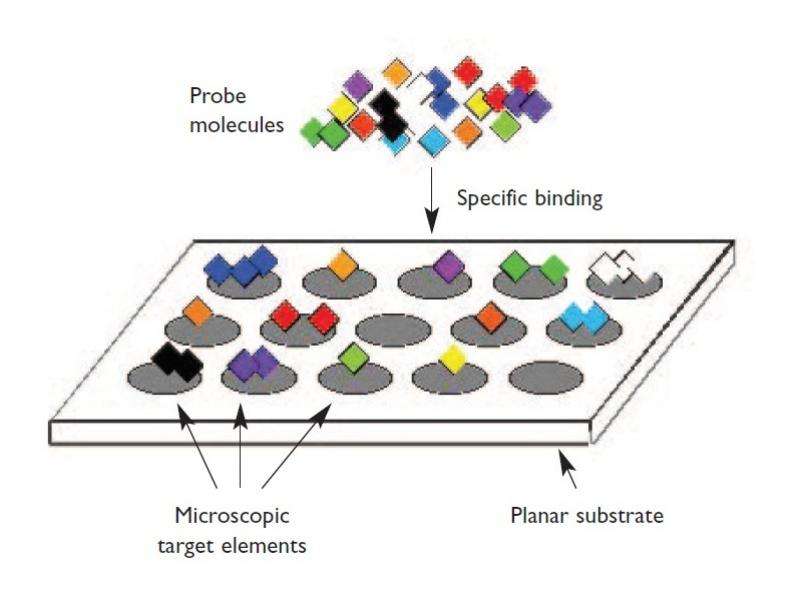 Microarray analysis allows the elucidation of biological processes and pathways on a genomic scale.

This revolutionary technology promises an unprecedented view of drug action and side reaction, the ability to identify drug targets and optimise lead compounds, the capacity to predict patient responsiveness vis-a-vis patient genetics in advance of clinical trials, and an opportunity to minimise side-effects and risk factors following drug approval.A new era of safer and more efficacious personalised pharmaceuticals leading to a diseasefree world are anticipated in light of this sweeping technological advance. 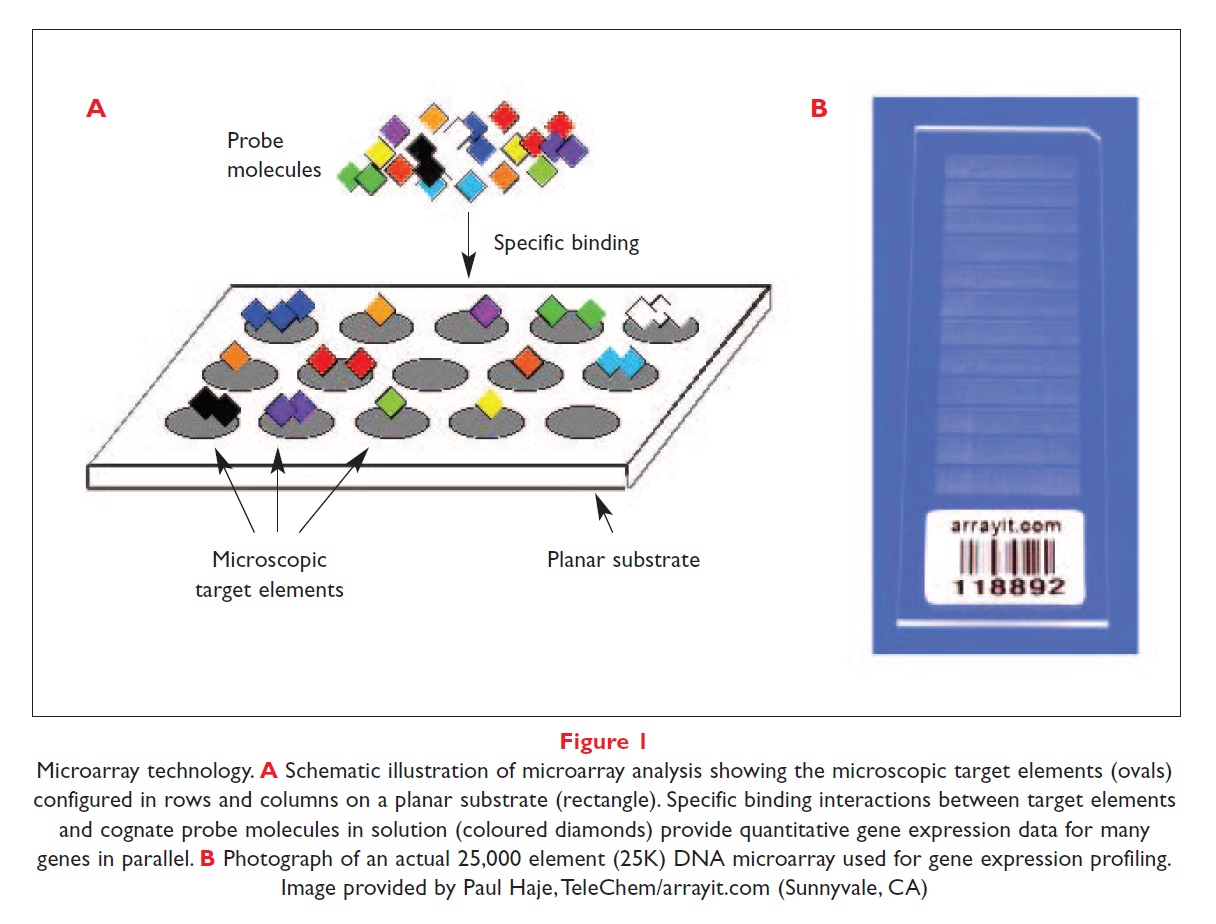 Microarrays, similar to microprocessors, use parallelism, miniaturisation and automation as the three conceptual cornerstones. Key advances in biochemistry including the discovery of the double helix and DNA polymerase in the 1950s, the development of recombinant DNA technology and the polymerase chain reaction (PCR) in the 1970s and 1980s respectively, and the recent completion of the human genome sequence are expediting the universal adoption of microarrays as analytical tools (Figure 2). 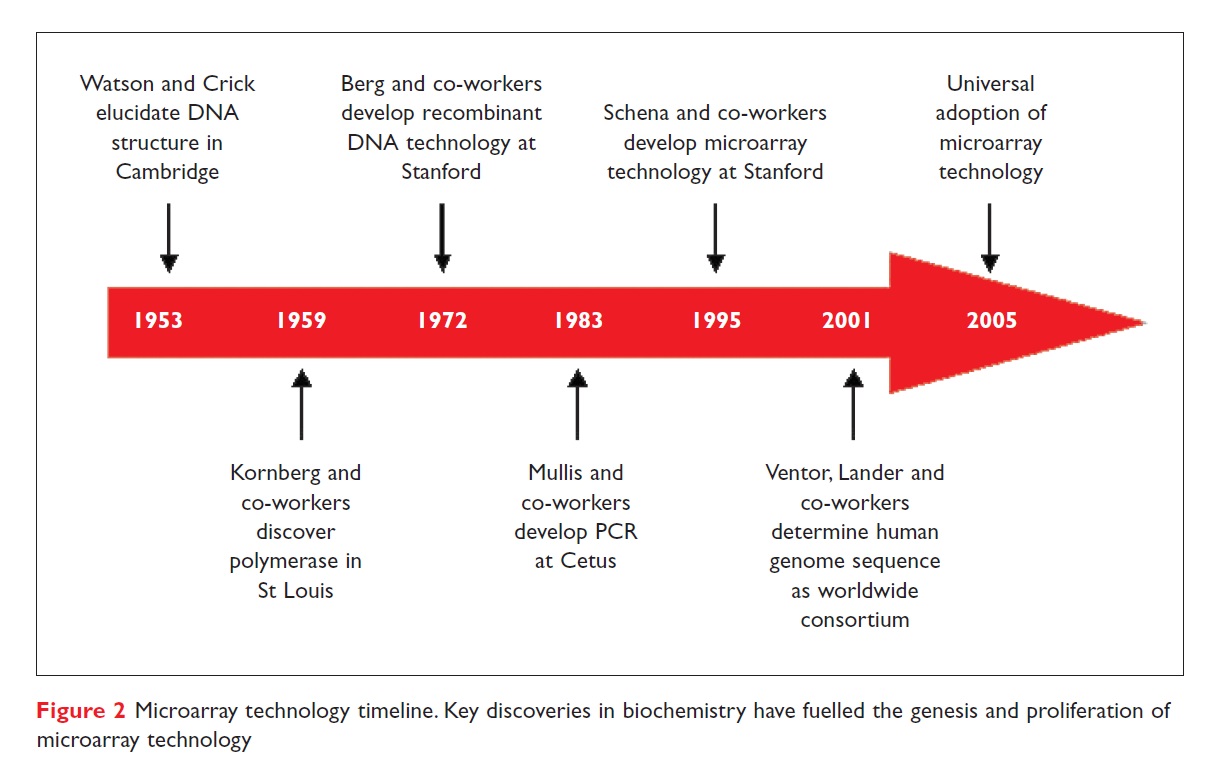 The speed, precision, affordability and efficiency of microarray analysis offer order of magnitude improvements over traditional molecular assays based on nylon filters and radioisotopes. The experimental advantages of microarrays suggested immediate applications in drug discovery and development (5), and this prediction has been borne out by more than 200 drug-oriented scientific publications in the past five years (see http://arrayit.com/e-library).

Microarrays have been used to examine tumour promoting substances (6), inflammatory disease states (7), yeast drug targets (8), antibacterial drugs (9), liver toxins in the mouse (10) and a myriad of other drug-related processes. A closer look at the drug discovery process in the context of microarray technology reveals key areas that can be improved by microarray analysis.

Essentially all of the drugs that comprise the >$100 billion per year worldwide pharmaceutical industry derive their efficacy from a simple biological paradigm: proteins execute the biological function of genes, and altering protein function can ameliorate disease symptoms by inhibiting cell signalling pathways, slowing the replication of infectious bacteria and viruses, and promoting the division of blood cells and other cell types and processes that are medically beneficial.

The vast majority of drugs are small molecules that bind directly to cellular proteins and alter their activity, producing changes in cell signalling (Figure 3A). One prominent class of small molecules alters the function of cellular transmembrane receptor proteins, and this drug family includes nearly 40 commercial products with annual sales exceeding $20 billion (11). Other drugs such as EPOGEN® and NEUPOGEN® are themselves proteins, and administration of these recombinant protein drugs stimulates red and white blood cell production in patients (Figure 3B) and ameliorates the consequences of chronic renal failure and chemotherapy, respectively. 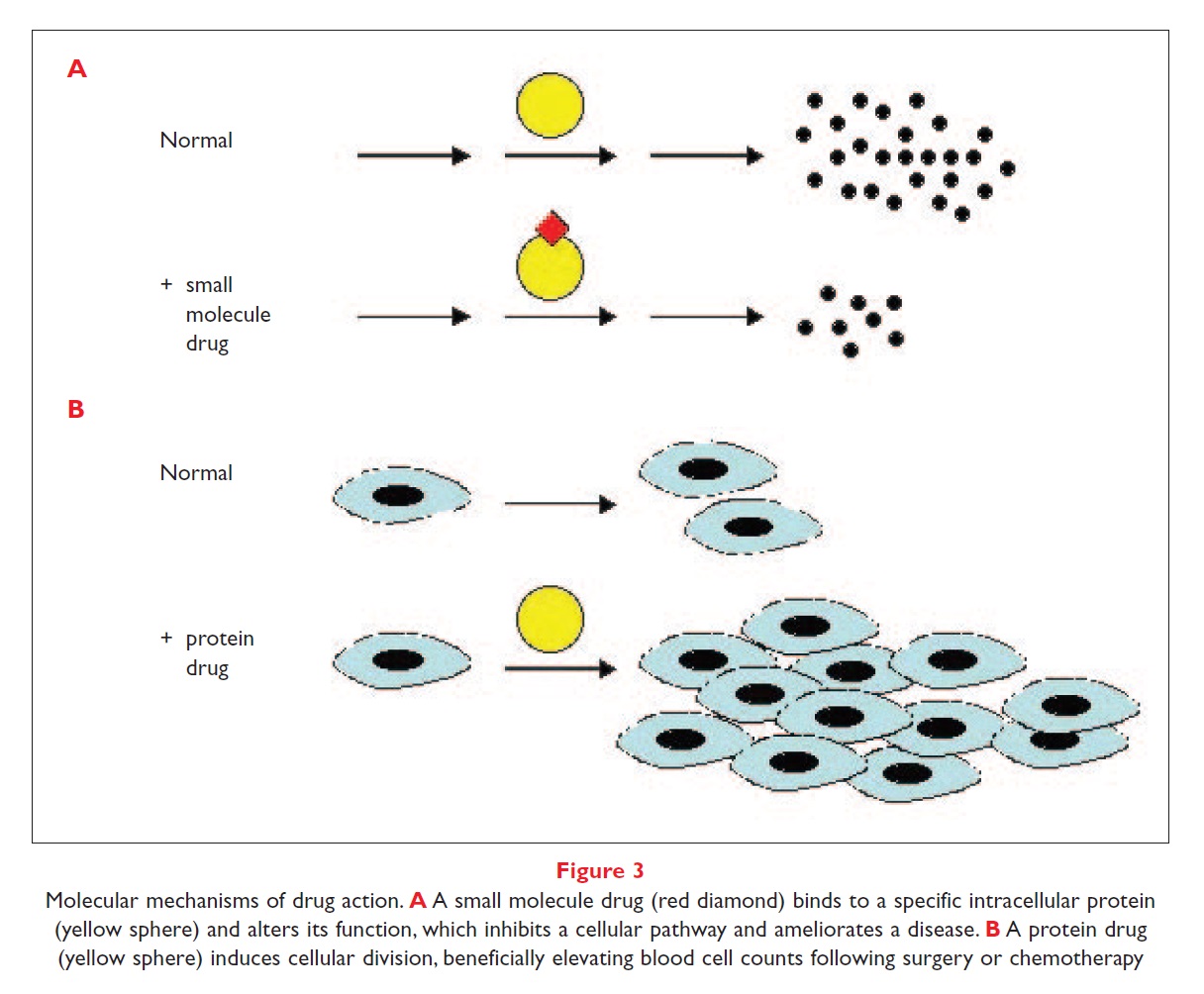 2) treating cells with modest levels of a small molecule can produce a gene expression ‘fingerprint’, providing clues to the protein and pathway targeted by the drug

3) expression profiles produced by small molecule treatment can be superimposed over the patterns of gene expression seen in disease tissues, speeding the identification of lead compounds

4) changes in gene expression patterns outside of the target pathway can identify side reactions, which could streamline lead compound optimisation and avoid potential toxic sideeffects in clinical trials and beyond

7) protein microarrays allow quantitative assessment of small molecule binding in the context of the proteome, facilitating target identification on a genomic scale

12) digital microarray data can be integrated easily into pharmaceutical databases

Expression profiles can be gathered for cells and tissues treated with pharmacological doses of small molecules and recombinant proteins, and in many cases such treatments produce stereotyped expression patterns resulting from drug-dependent alterations of protein function (5,7,12). The genes and cellular pathways affected by drug treatment provide clues to the proteins bound by the drug, and allow the identification of genes that reside downstream of the drug targets.

Low doses of drug and short treatment intervals increase the likelihood of eliciting physiologically relevant changes rather than general cellular toxicity and improve the chances of identifying primary response genes. Gene-drug relationships established by expression profiling can be assembled into large databases for data mining, modelling and drug discovery (13).

Gene-drug relationships can be compared to patterns of gene expression altered in disease states, allowing the researcher to ‘superimpose’ the two types of data and identify promising lead compounds by the use of a computer. One such scenario would be to test a lead compound that inhibits a cellular pathway against a disease that activates the same pathway or, reciprocally, to use a lead compound that activates a cellular pathway against a disease that represses the corresponding pathway.

This ‘microarray-to-lead’ approach could speed drug development by streamlining or circumventing the traditional labour-intensive processes of target identification and screening. The interplay of steroid hormones, altered gene expression patterns and breast cancer exemplify conceptually how such studies might be performed (14).

Pharmaceuticals have a myriad of beneficial effects, but some drugs also manifest one or more side-effects including dizziness, headache, nausea, elevated blood pressure, tremors, hair loss, numbness, dry mouth and a host of others. In many cases, the molecular basis of the side-effects is poorly understood, but the predominant view is that such effects probably arise by the unwanted binding of a drug to one or more non-target proteins inside the cell.

Microarray-based expression profiling on a genomic scale could be used to identify druginduced changes in gene expression that fall outside the target pathway, yielding the identity of non-targets and the pathways they control. Lead compounds and currently marketed drugs could be optimised using an iterative procedure involving structural modification and microarray analysis to obtain structural variants that bind strongly to the target protein but not to non-targets, with binding specificity being assessed by expression monitoring during the iterative process. This general concept has been validated in a number of studies, including those that correlate chemical exposure with specific changes in gene expression (15).

Phase 2 clinical trails are essential for determining the effectiveness and safety of a drug, but such trials rarely consider the genetics of the patients that the drug is designed to treat. The availability of a complete human genome sequence and affordable microarray genotyping technology, make it feasible to identify markers that might determine responsiveness or non-responsiveness in the clinical trials population. One reasonable scenario is that non-responsiveness tracks with the presence of a single nucleotide polymorphism (SNP) in the target protein, which reduces drug binding affinity and efficacy.

SNP and other sequence variants are readily identified by microarray (16), and next generation screening (NGS) technology allows thousands of patients and multiple genes to be screened in a single test (17). Screening clinical trials candidates in advance of phase 2 trials might provide a more accurate assessment of drug efficacy and safety, by excluding patients that are incapable of drug responsiveness for genetic reasons that have nothing to do with the efficacy of the drug per se. Recent microarray experiments on HER-2/neu expression in breast cancer patients underscore the heterogeneity of the patient population and the importance of elucidating the genetic basis of the heterogeneity (18).

The burgeoning field of protein microarray technology allows researchers to study protein-protein interactions, protein-substrate specificity, proteindrug binding, and other biochemical reactions in a microarray format (3). Protein microarray platforms provide a major technological advance over traditional and cumbersome protein assays that use columns, filter discs and microplates and microarrays are expected to replace most traditional biochemical assays in the near future.

Microarrays con-taining the complete set of 25,000-35,000 proteins expressed in human cells would allow comprehensive assessment of drug binding in a single experiment, and such tools are on the immediate horizon. Small molecule microarrays (19) containing thousands of different drug targets allow small molecules to be screened against a protein target in a microscale format. Drug microarrays obviate the need for a separate well for each compound as in traditional microplate assays, which greatly minimises reagent consumption and improves throughput. 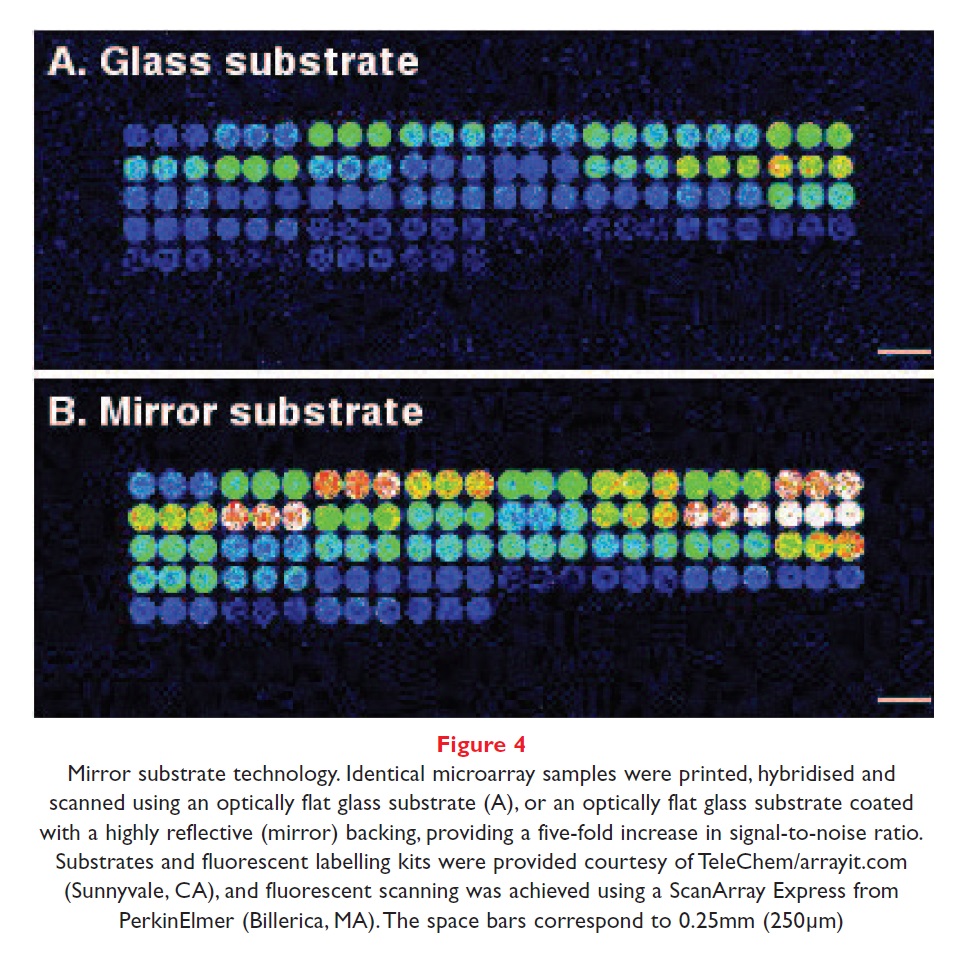 Microarrays can be manufactured using gene and protein sequences from organisms other than human, including canine, rabbit, mouse, rat, chimpanzee and others, and model studies in these organisms are showing great promise for toxicity testing in pre-clinical trials and for understanding basic disease mechanisms (20,21).

The advent of tissue microarrays (4) and laser capture microdissection-based microarrays (22) allow gene expression analysis at single cell resolution, which is extremely valuable because many drugs are thought to act on a subset of the cells present in a particular tissue. Lead compound identification and optimisation will make good use of TMA and LCM technologies, and it is now possible to think about drug action at the level of single cells.

Segments of patient DNA can be printed at high density and hybridised in parallel with fluorescent oligonucleotides to determine patient genotypes. NGS technology exploits multicolour fluorescence (Figure 5), and allows thousands of patients to be screened for multiple disease loci in a single test (17).

A key feature of the NGS approach is that the cost of each test is amortised across the hundreds or thousands of patients represented on the chip, which reduces the genotyping cost by several orders of magnitude compared to conventional ‘one chip per patient’ microarrays. The capacity to screen SNPs and other sequence variants and to identify viral and bacterial types rapidly and inexpensively will improve major aspects of drug development and administration. The digital format of all microarray data allows seamless integration into the massive databases used in the pharmaceutical industry.

Microarrays promise to speed up drug discovery, provide safer and more personalised medicines and eradicate disease in an argument that goes something like this. Aberrant gene function (mediated by proteins) causes every human disease and the sequence of every disease-causing gene is now known. Millions of small molecules made available through the combined sources of natural products, organic synthesis and combinatorial chemistry, represent a yet-to-be-discovered drug against every human protein.

In some cases, genes, genes products and derivatives thereof can be used to ameliorate disease. Microarray assays allow the examination of DNA, RNA, proteins, small molecules and tissues in a massively parallel format, allowing partnering between every human gene (protein) and a specific therapeutic agent (Figure 6). 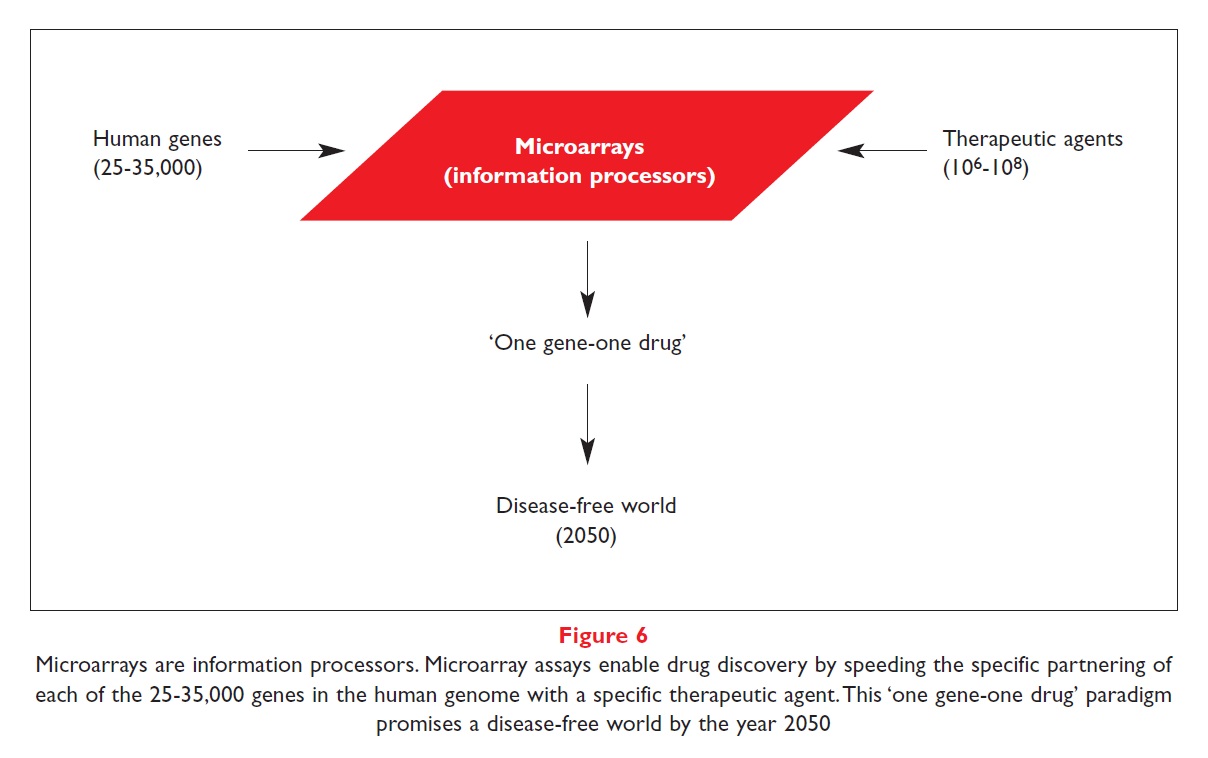 This ‘one gene-one drug’ hypothesis, reminiscent of Beadle and Tatum’s pioneering ‘one gene-one enzyme’ hypothesis of the 1940s, provides the foundation on which to achieve a disease-free world by 2050. DDW

This article originally featured in the DDW Winter 2002 Issue

Dr Mark Schena, the ‘Father of Microarray Technology’, received his BA from UC Berkeley, his PhD from UCSF and postdoctoral training at Stanford University. Dr Schena wrote the first paper on microarrays in 1995, the first two technical books for Oxford Press and Eaton Publishing, and has just completed the first textbook, Microarray Analysis, for J. Wiley & sons. He has given more than 80 lectures on microarrays in 15 countries.