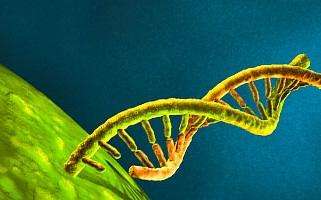 During the last 30 years exceedingly sensitive and accurate technologies have been developed to measure and quantify amounts of nucleic acids and proteins.

With techniques such as quantitative real-time PCR (qPCR) and nextgeneration sequencing (NGS) DNA, messenger RNAs (mRNA), micro RNAs (miRNA), long non-coding RNAs (lncRNA) and today even proteins can be measured in most types of samples allowing the comparison of environmental conditions, studies of diseases and monitoring of treatments.

Despite these technological advances, understanding biological phenomena on molecular level and identifying useful biomarkers to support clinical decisions remain challenging because of large variation in data.

Confounding technical variation may be substantial when (for profiling) unsuitably preserved samples are used or samples are handled improperly (3,4). When suitable samples are tested using optimised and standardised procedures, technical reproducibility is high and confounding variation is predominantly biological. A methodology to estimate the variance contributions of the steps in an experimental protocol and to optimise the design has been described by Tichopad et al (5) and is today implemented in software such as GenEx (6).

When studying human samples intersubject variation due to the individuals being genetically different is substantial. On top of that is sample heterogeneity. Analysing different bits of the same tissue can show substantial variation. Homogenising the sample removes the influence of sampling, but will not necessarily improve the diagnostic value. The sampling variation is due to the presence of many different cell types that can have disparate functions, may react to diverse stimuli and have distinct responses to drugs.

In the homogenised material the important cell type may be in minority and its response may go unnoticed due to the non-relevant and unimportant signals from the prevalent cells. Then there is dynamic variation in the RNA and protein levels in individual cells over time even in the absence of stimuli.

Transcripts and proteins are usually produced in burst with a rapid rise in expression followed by slow decay (7,8). The burst kinetics leads to highly skewed distribution of transcripts observed even among seemingly like cells, with most cells harbouring very few transcripts and the majority of the transcripts being present in only a small subset of the cells, which can be modelled with a log normal distribution (Figure 1) (9). 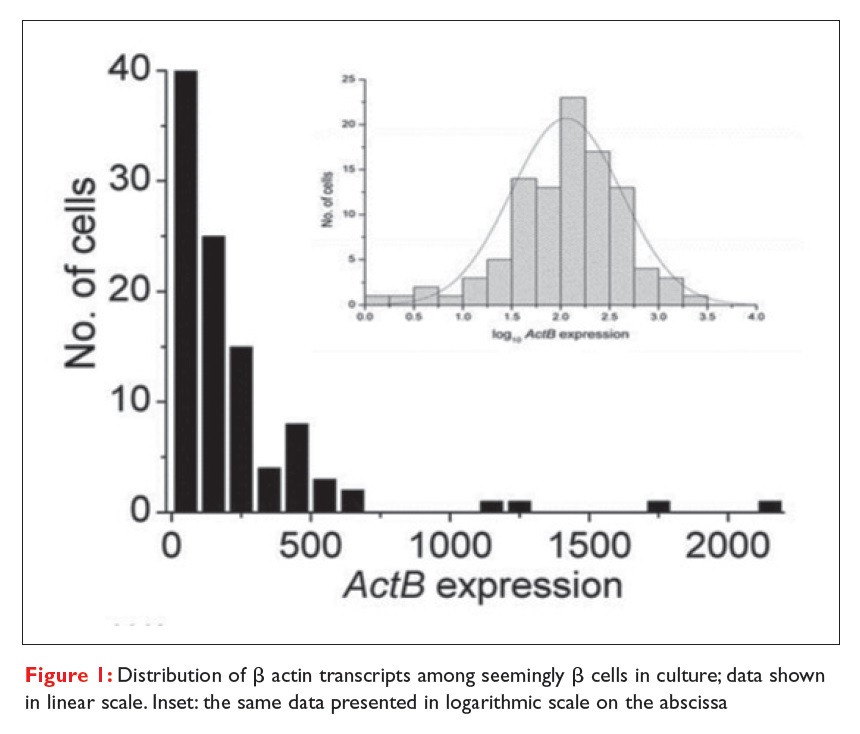 This variation in the number of transcripts among cells is usually the dominant contribution and is readily measured with high precision (5,10). In traditional samples composed of thousands of cells, the cell-to-cell variation is lost by the inherent averaging. As we shall see, the cell-tocell variation is highly informative, providing an insight into the underlying biology of the studied tissues and their responses that cannot be measured by traditional means (11).

Already in the very first qPCR single cell profiling study, which measured expression of five genes in individual mouse cells, it was found that the majority of these genes showed uncorrelated expression; transcripts of the different genes were most abundant in different cells (8).

Only one gene pair showed correlated expression, which on the contrary was highly correlated, signifying the transcripts were produced at the same time in the cells. These were the two insulin genes present in rodents. Despite being located in different chromosomes their transcriptional bursts are evidently synchronised. The genes have high sequence similarity, since Ins1 was once formed as accidental retrotransposition of partially processed Ins2 mRNA. They should share many transcription regulatory factors and therefore are likely to be transcribed in a common transcription factory (12).

Since this first publication the field of single cell profiling has exploded, very much spurred by the development of reagents that simplify workflow and high throughput qPCR instruments that reduce running cost and hands-on time (Figure 2). 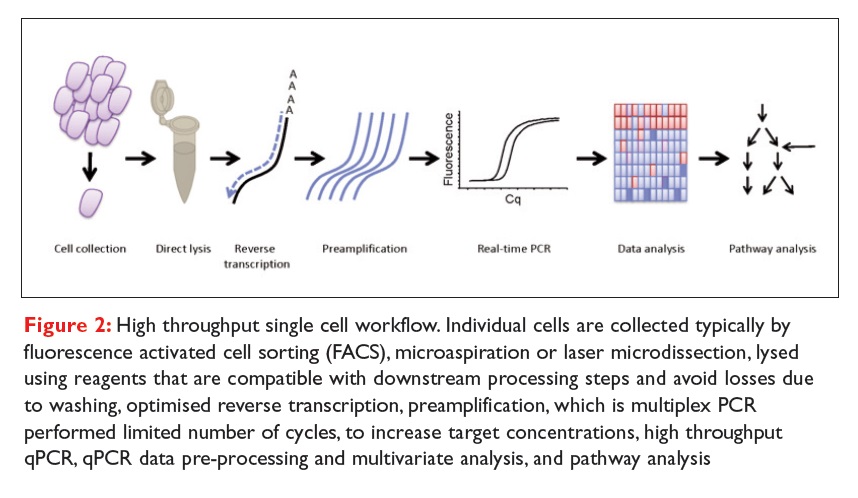 Individual cells are collected typically by fluorescence activated cell sorting (FACS), which is most convenient and suitable for high throughput analysis. However, the sorting conditions may stress cells affecting the expression of some genes. Alternative methods to collect cells are microaspiration and laser microdissection. The cells are sorted directly into a lysis buffer compatible with downstream reverse transcription (13), which eliminates losses due to washing (14).

The cDNA is then preamplified, by performing multiplex PCR a limited number of cycles, to increase target concentrations (15). This step is critical, since in the subsequent parallel qPCR, the number of target molecules per reaction chamber should be some 20 minimum to avoid serious confounding sampling ambiguity (19). For mainstream applications Fluidigm has developed the microfluidic C1 Single-Cell Auto Prep System that automatises the steps from single cell collection (though without sorting) to the production of preamplified cDNA (16).

Next step is high throughput qPCR, which is performed in nanolitre volumes to keep reagent consumption down (17). The very large amount of measured data is then transferred to software such as GenEx in a convenient workflow using instrument specific wizards for qPCR data pre-processing and subsequent multivariate analysis (18).

The most informative genes are analysed and used as basis for pathway analysis (19). The three leading solution providers Life Technologies, Fluidigm and Roche have all aligned with MultiD Analysis and Ingenuity systems to secure robust and reliable workflow from single cell collection, preanalysis, data collection, data mining and pathway analysis.

During the last 10 years pathway analysis has become the first choice for gaining insight into the underlying biology of differentially expressed genes and proteins (20). Traditionally, pathway analysis is applied on global expression data on classical samples composed of large numbers of cells. The cell types present show different behaviour leading to complex patterns, often with thousands of genes showing altered expression. Disintegrating the sample into single cells separates their responses and distinct profiles characteristic of each cell type are obtained.

This great improvement is a consequence of the single cell being the studied unit, but also to the burst kinetics. When exposed to an environmental change that affects several expression pathways, it is possible distinct pathways are triggered in different cells. These factors dramatically reduce the complexity of the observed expression patterns, making it much easier to elucidate the underlying expression networks and pathways.

In addition to the classical multivariate analysis, correlation analysis is most powerful and frequently reveals distinct groups of genes with correlated expressions (21,22). The networks can be further analysed calculating partial correlations to separate true direct dependence from apparent indirect dependences. The difference between direct and indirect correlation can be understood by considering some weather statistics collected in Sweden and reported few years ago in a newspaper.

The paper noted that ice cream sales rose on hot summer days. The paper also noted that swimming incidents increased with temperature, and concluded eating ice cream was dangerous. Of course there was correlation between ice cream consumption and swimming incidents, but this was accidental caused by the two observations having a common trigger. Such indirect non-relevant effects can be removed by analysing partial correlations.

One study using this approach is activation of astrocytes in response to brain trauma in the form of focal cerebral ischaemia using mice models (20,23). These astrocytes express green fluorescent protein under the control of the astrocyte marker Glial Fibrillary Acidic Protein (GFAP) and can be sorted by FACS from brains of mice sacrificed at different time points after trauma for single cell profiling. The cells can then be classified based on their global expression patterns, typically after filtration to remove the least affected genes that in the analysis would only contribute with noise (Figure 3). 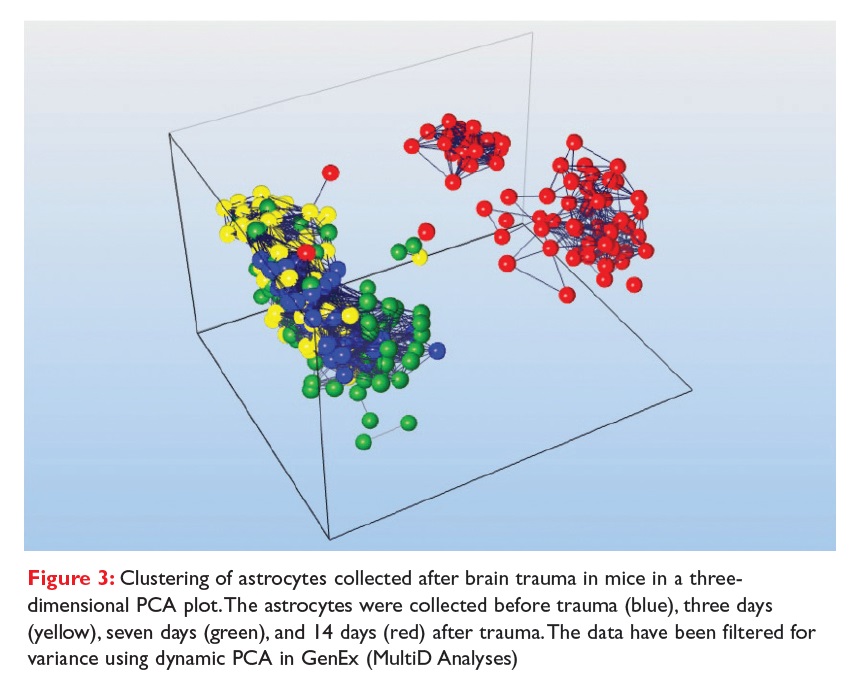 Visualised in a three-dimensional principal component analysis (PCA) plot, where the axes reflect combined expressions of gene that maximise separation, we see clear differences between astrocytes collected before trauma (blue), and at three (yellow), seven (green), and 14 days (red) after trauma. The changes reflect activation of the astrocytes in response to the trauma and also reveal that the active population prevalent after 14 days is heterogeneous being composed of two distinct subgroups (two red clusters).

Genes important for the activation are identified by the PCA, as well as genes differentially expressed between the two subgroups of the reactive astrocytes. Correlation between the genes’ expressions on the single cell level defines networks of genes that produce transcripts at the same time in the same cell, suggesting their simultaneous presence may be biologically significant (Figure 4). 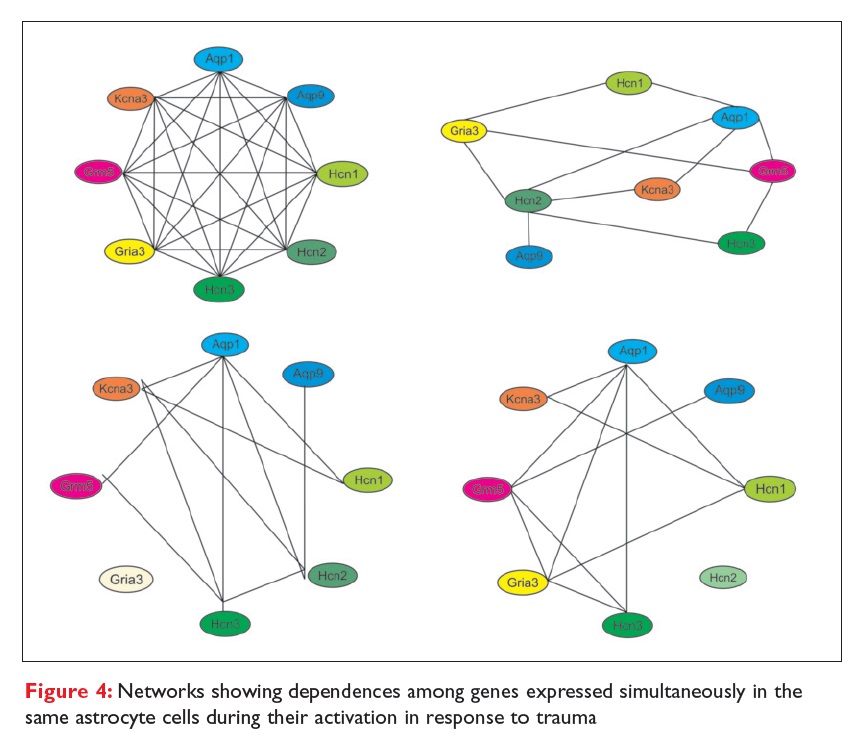 Proteins can also be measured using qPCR. Two techniques dominate, both being based on the simultaneous binding of two specific antibodies to a common protein. In the original Proximity Ligation Assay (PLA) two antibodies, each tagged with an oligonucleotide, bind to a common protein target (Figure 5, top) (24).

An adapter oligonucleotide complementary to the oligonucleotide ends is used as seal to catalyse ligation producing a long DNA template. The amount of long DNA formed is quantitatively measured by qPCR, which reflects the initial amount of the target protein. The technique is today available through Life Technologies as the Taqman protein assays25. In the related Proximity Extension Assay (PEA) the tethered oligonucleotides overlap and can be extended without adapter (Figure 5, bottom). 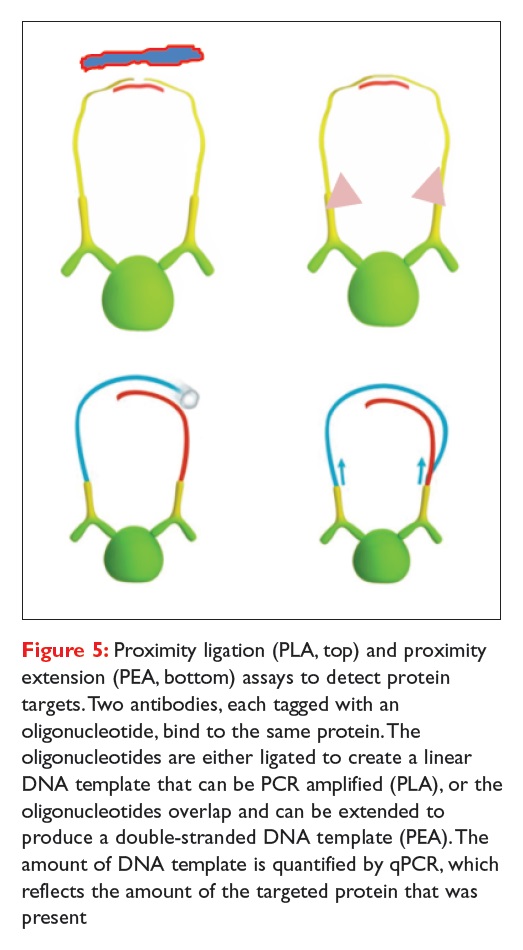 The PLA and PEA can be combined with preamplification for the parallel analysis of up to 92 proteins in high throughput format (26). Recently, protocol was developed to split a single cell sample for the simultaneous analysis of DNA by qPCR, mRNA, miRNA, and lncRNA by RT-qPCR, and protein by PLA-qPCR (27). This was the first example of multianalyte single cell profiling and demonstrated correlation of the levels of related DNA, RNA and protein. In the future this approach will be most valuable to study intricate interactions between the different types of biomolecules occurring in the cell.

Can one go beyond the single cell? Indeed one can.

The oocyte from the African claw frog Xenopus laevis is a colossal single cell that can be mounted in a cryostat. Furthermore its two hemispheres, known as the animal and vegetal pole, have different shades allowing the oocytes to be oriented. The mounted, oriented oocyte can be sliced across the animal-vegetal axis and the RNA extracted, reverse transcribed and quantified. Three distinct intracellular gradients of transcripts are observed in the Xenopus laevis oocyte (Figure 6). 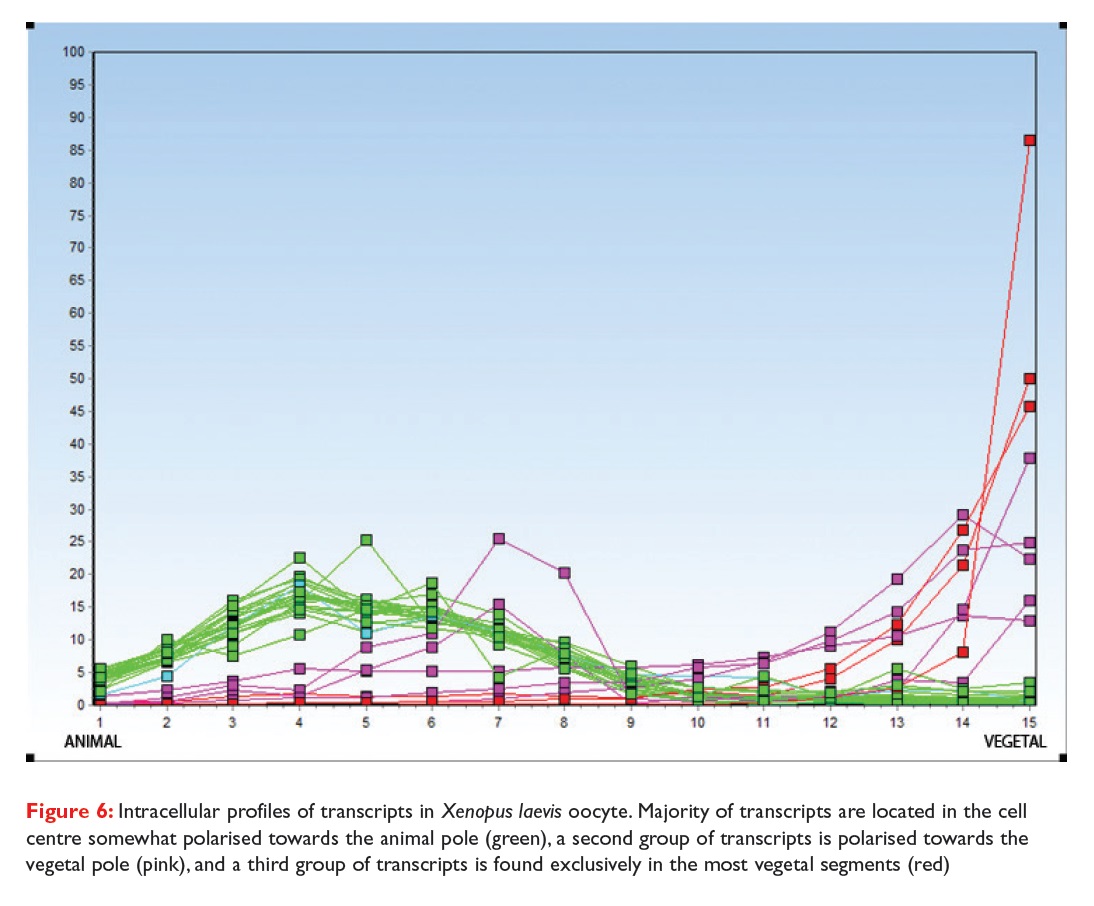 The emerging single cell profiling platforms offer new insights into cell biology expected to lead to novel discoveries and even challenge some dogmas. Particularly exciting will be the new possibilities to characterise cell types and study their differentiation and proliferation. Whereas no two cells are identical in appearance, generalised patterns of morphology and biochemistry suggest that all cells conform to a relatively limited number of patterns referred to as cell types.

The tens of trillions (1013) of cells in a human body are often said to be made up of 210 cell types subdivided into 20 categories assembled in 1989 based primarily on function (28). A more recent classification suggests there are 411 cell types (29). However, a precise and unambiguous definition of cell type is notoriously difficult (30).

Environmental conditions, external stimuli, number and nature of neighbouring cells, signals from remote cells through hormones, exosomes and other signalling substances, access to nutrients, oxygen and other vital substances, removal of waste products, phase of cell cycle, accumulated somatic mutations, integrated viruses, transposons, epigenetic alterations, any rearrangements and perhaps even its age and generation will affect a cell’s molecular activities.

Some may lead to virtually irreversible differentiation, while others may lead to reversible or even temporal changes only. Single cell profiling is expected to shed light on these processes, perhaps by identifying cell type specific expression networks, helping to reach a definition on cell type and defining the molecular events that make a change irreversible. DDW

This article originally featured in the DDW Summer 2013 Issue

Dr Anders Ståhlberg is co-founder of the TATAA Biocenter and is working as principal investigator at the University of Gothenburg. His main interest is tumour biology and stem cells, with focus on understanding cell hierarchy and cell transition processes. Together with Dr Mikael Kubista’s team at TATAA, he has developed several strategies to study single cells, including approaches to analyse many sample types as well as different analytes including RNA, DNA and proteins from the same single-cell.