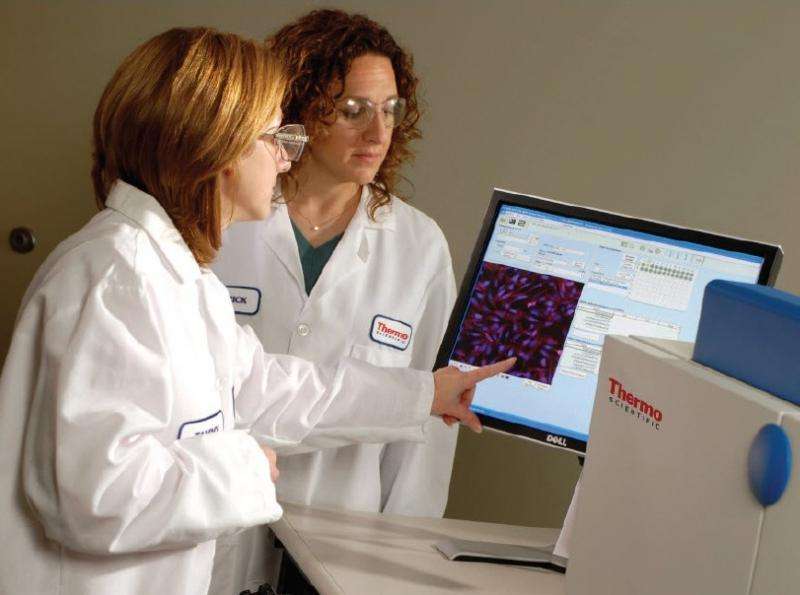 If time is money, then real progress has been made in high throughput screening (HTS) technology in the past two years – HTS assays are being developed more quickly. According to the recent report High Throughput Screening 2010: Effective Strategies, Innovative Technologies, and Use of Better Assays based on interviews with 52 HTS directors at pharmaceutical companies and government-sponsored institutes and published by HighTech Business Decisions, the time it takes to develop HTS assays is now less than six months on average.

Several factors contribute to this improvement: experience on the part of the scientists with technology and targets, new technology such as two-antibody assays, sensitive detection and accurate liquid handling, and commercially available reagents including antibodies, assay kits and a broader selection of fluorophores. 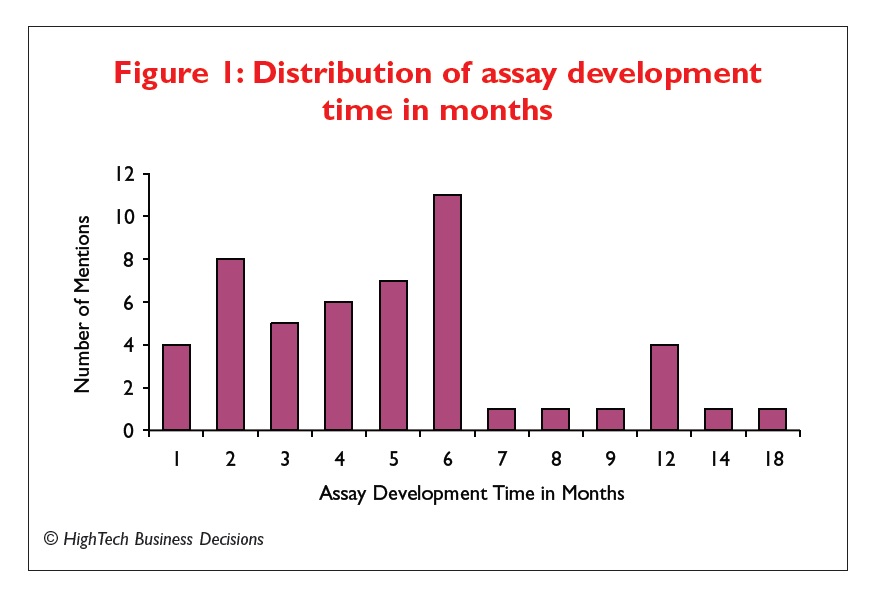 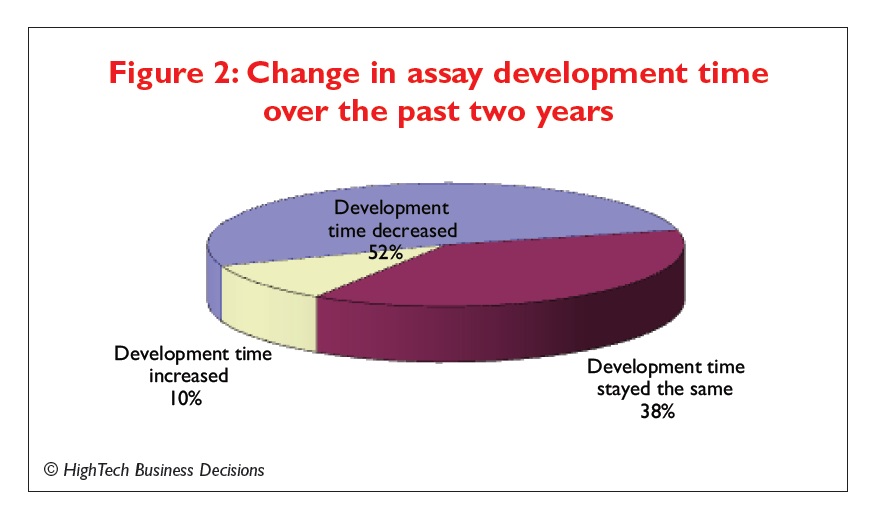 HTS directors mention several reasons that have contributed to this decrease, including:

Experience with HTS and the target

High throughput screening has become a wellestablished technology in the past decade, and directors and their staff have become experienced meeting the unique miniaturised and automated demands of HTS. Familiarity with a target and knowledge of its active site dynamics and other physical properties of the proteins facilitates assay development.

The following comments from the HTS lab directors describe the effect of experience on assay development.

“Assay development time has decreased a little bit because people working with the assays are more knowledgeable.” HTS laboratory

“When I worked at a small biotech company, assay development time took two to three weeks because we were working on similar target classes.” Non-commercial laboratory

HTS directors have seen that it is important to incorporate automation and robust screening assay formats from the beginning of assay development.

Early communication with the therapeutic or target identification groups diminishes delays caused by the need to generate reagents. The comments below describe how early implementation of HTS speeds assay development.

“We start off with a robot-friendly assay so assay development is very fast, and there’s no adapting the assays to the high throughput instrumentation.” HTS laboratory

“It used to be that targets were proposed, approved, and then we would have to wait for reagents and assays to be generated before we could start screening. Now when the target ID group finds a target, they let us know about three months ahead, and we start generating reagents and developing assays ourselves. This has completely eliminated reagents and assays that are inappropriate in a high throughput format, and it has decreased our assay development time by 2.5 months.” HTS Laboratory

New technology has enhanced screening making it faster with better quality. Liquid handling is more accurate and automated scheduling has improved. One HTS vendor noted: “Most of the mechanical and software problems have been solved, so the challenge isn’t a matter of moving the wells around.” As a consequence of experience and familiarity with the targets, lab directors are able to develop some standardised approaches to assay development. The following remarks expand on some of the standardisation directors are implementing.

“Assay development time has decreased because we have set up a process in which we do a full high throughput characterisation of the proteins we use.” HTS laboratory

Availability of custom and commercial reagents and assays

The availability of commercial reagents and assay kits is another time-saving tool that has influenced assay development, as one director commented, the time “depends on the availability of tools. If we can purchase an enzyme commercially, then it may take three to four months”. Custom or commercial assays are enabling labs to save time on internal development thus speeding targets into screening. One director noted below that previously established assays are helpful.

“There’s a big variation, which depends on the complexity of the assay, biochemical or cell-based, whether there is already an assay in the literature or commercially available. Assay development time has decreased over the past two years due to the availability of commercial assays.” HTS laboratory

Roadblocks preventing further improvement Despite the improvements made in assay development, some roadblocks continue to present challenges as summarised in Figure 3. 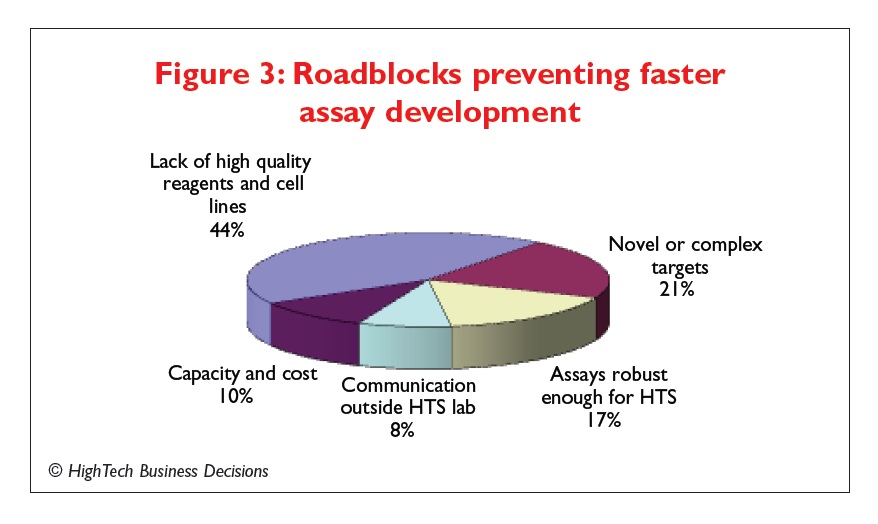 Generating reagents, both proteins and cell lines, continues to be the most significant roadblock to further improvements in assay development times (44%). Outsourcing reagent production has had a beneficial impact on development time. Several directors mention they prefer to purchase these reagents and find assay development is inhibited if they are unable to find commercially available products.

The assays themselves sometimes cause trouble, with 21% of directors reporting that novel or complex targets take more time, and 17% reporting that developing assays robust enough for an automated system is problematic. The challenge is to fulfill all criteria: low signal-to-noise ratio, uniform signal across the entire plate, and reproducibility. Several directors commented below that the biology in the assays can be surprisingly complex.

“We think of single molecular targets, but often that is not really how things work, so you don’t get what you expect.” HTS laboratory

“Physiological relevance is our greatest assay development roadblock. We spend a lot of time convincing teams to do a screen in the most physiological relevant system. We have the most difficulty with the translation of our in vitro results to in vivo systems.” HTS laboratory

Interestingly, several directors said communication with the scientists bringing the assay into HTS is a challenge. These directors, who are mostly at core academic screening centres, are providing service to their university communities, and as such, do not participate as early in assay development as directors at more integrated companies. One of these academic centre directors describes the benefits of early collaboration.

“For us, one of the things is communicating to the investigator the ways in which HTS is different from a bench top experiment. Controlling for temperature is more challenging and so is the time needed to initiate and read the assay. With our automation, we do things in batches and we can’t just read the results whenever we want to.” Non-commercial laboratory 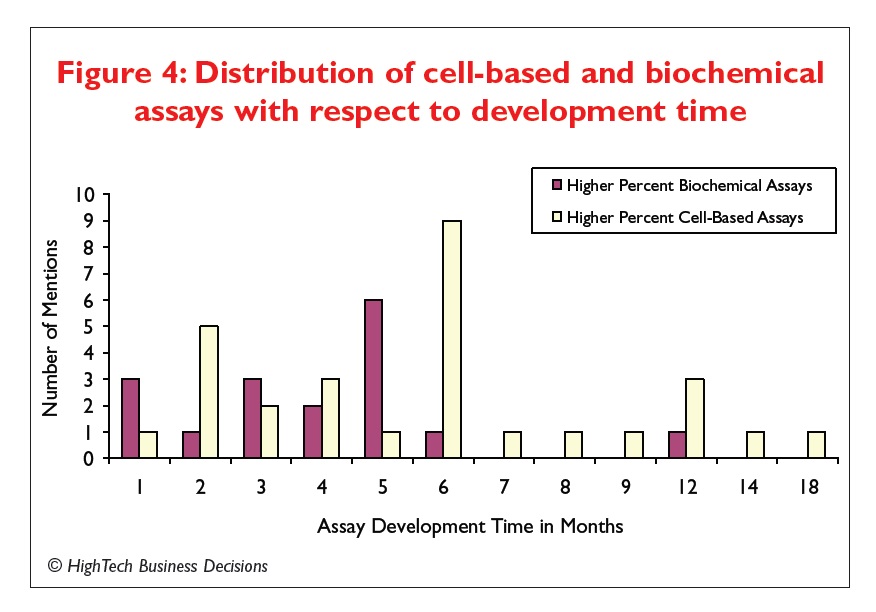 Innovative tools and enhancements to current technology will positively impact assay development. Already, HCS and patch clamp instruments are more robust with faster throughput, and label-free technology has opened up opportunities for intractable targets. One HTS director described the contribution of innovations in technology.

“More complex assays are needed now to find hits. HCS is probably the most important. Now we can do phenotype assays in high throughput. We are no longer limited to doing follow-up assays on hits from biochemical assays. We can screen targets directly in a smart, multiplexed way. Population patch clamp technology is also important and mass spectrometry (MS) is coming to HTS. With our UPLC device, we can screen 10,000 data points in a week. With two instruments in tandem, we can screen our complete library of 250,000 compounds in six weeks, which makes it competitive.” HTS laboratory

“We prefer to outsource protein production, cell line development and scale up. We outsource items that we don’t have enough infrastructure for and requires no innovation on our part.” HTS laboratory

“We outsource cell production because it is cheaper. We outsource compound profiling to another company because of their expertise. We outsource assay development to gain access to certain technology.” HTS laboratory

Several directors commented they do not currently outsource assay development, but would be interested if something unique became available.

“We would be interested in outsourcing custom assay development if a unique solution for us came along, but no one in the biotech industry supplies our specialised needs.” HTS laboratory

“There was one company that approached us with an assay and it was really intriguing, and it wasn’t something we could do, so we contracted them to do it.” HTS laboratory

Faced with an increased need for assays that probe targets in a more natural but complex environment, screening directors are asking HTS vendors for help in developing customised assays. The vendors often have specialised expertise in assay development through validating their own commercial reagents and assay kits. In the comments below, several vendors describe how they provide customised solutions for their clients.

Thermo Scientific HCSOnDemand™ offers managed services for cellular imaging to accelerate research and drug discovery. Mike Anhalt, Product Manager at Thermo Scientific, says, “At the core of HCSOnDemand™ lays our expertise in developing multiplexed imaging assays used to quantitatively monitor the cellular changes in cells after drug treatments. Cell physiology parameters such as morphology, viability, migration, nuclear fragmentation and response to stress can be monitored and then measured in parallel and correlated with protein localisation, post-translational modifications and abundance.

To run a timely and efficient project, multiple review milestones are created within the schedule and a lead scientist is assigned to each project. This allows for direct and efficient communication to the client. In addition to assay development, screening services are also available, which is ideal for expanding capacity for time/resource critical projects” (Figure 5). 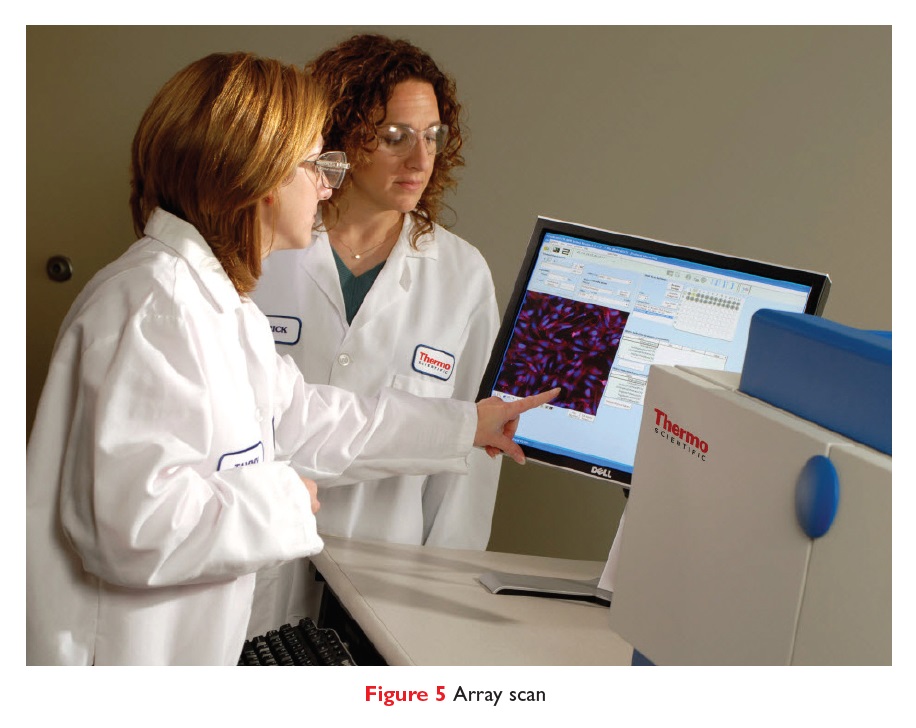 According to Melissa Stolow, Market Development Leader, Cell Systems Division, Discovery Assays and Services at Life Technologies, drug discovery scientists are faced with a variety of challenges to overcome in assay development. These include the reduction of internal resources and increased pressure for biologically relevant assays. “Project goals are critical,” said Dr Stolow, “and we have developed a dedicated infrastructure to design and manage these to a successful outcome.

We offer effortless project initiation and execution, managed by a dedicated project manager committed to proactive communication. With our suite of enabling technologies such as Jump-In™ and BacMam we can significantly reduce assay development time and create assays in more relevant cell systems, such as human primary cells” (Figure 6). 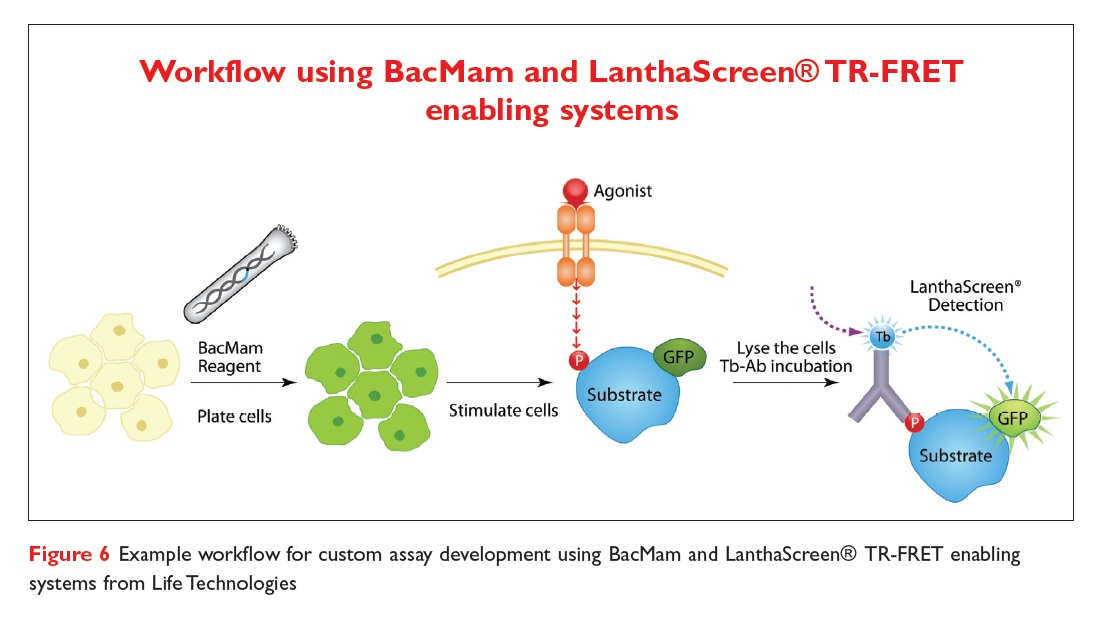 “Tag-lite enables the investigation of biological events at the cell membrane by offering plasmid generation encoding for tagged receptors, custom design and synthesis of fluorescent ligands for binding assays, generation of multimode cell lines, delivery of pre-labelled ready-to-use cells for receptor ligand binding and internalisation assays. This unique solution enables researchers to address the whole biological complexity of membrane receptors, from structure to function, through a customised approach” (Figure 7). 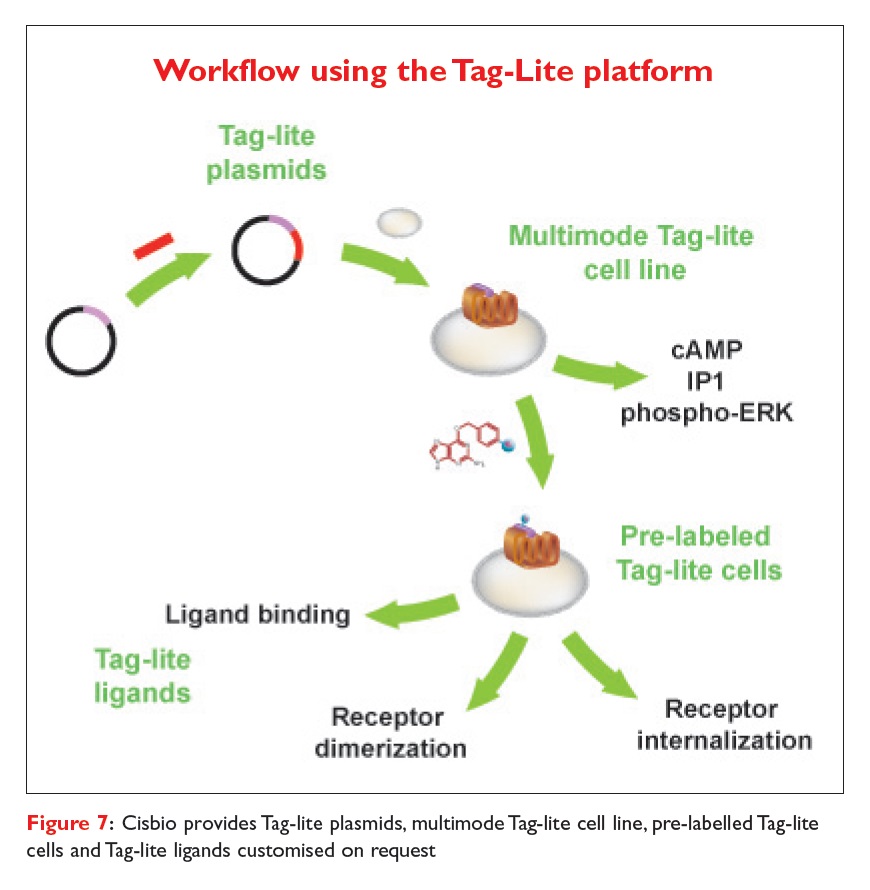 For a disease such as Amyotrophic Lateral Sclerosis, which affects motor neurons specifically, BioFocus is screening in human stem cell-derived motor neurons, which has only become a possibility with the recent advances in stem cell biology” (Figure 8). 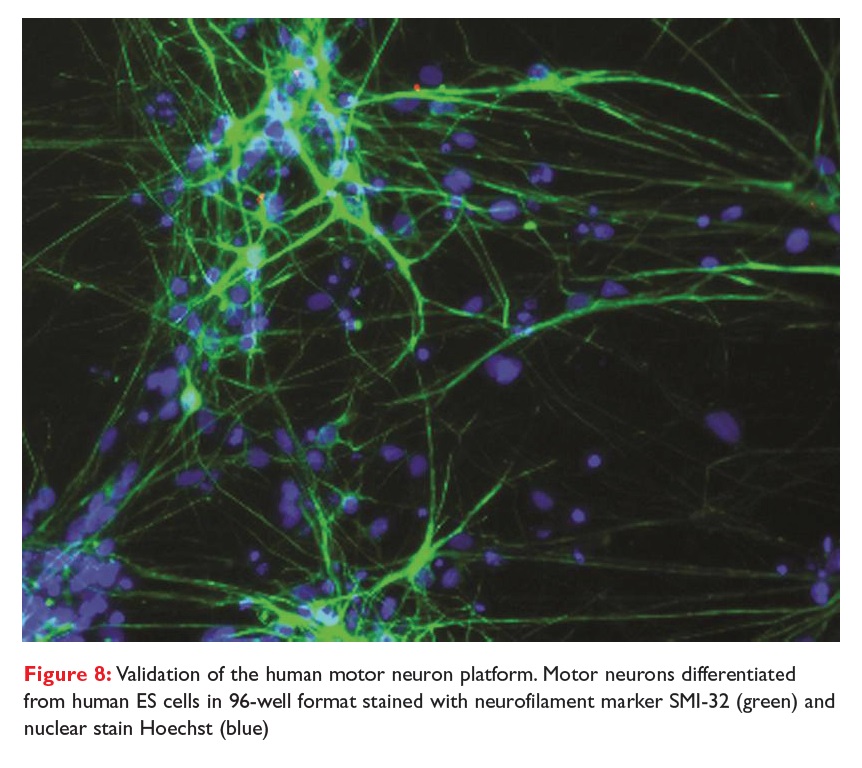 Assay development time has improved over the past several years due to the skill of screening scientists, robust and precise automated instruments, and high quality compounds and reagents. HTS directors use several strategies to speed development time including more communication with other departments, developing platform approaches where possible, and outsourcing production of protein and stable cell lines. Unfortunately, roadblocks to improved assay development persist.

Producing proteins and cell lines internally is slow and commercial reagents are not available for every target. In addition, developing cell-based assays continues to be challenging, yet these more complex assays are considered critical for generating physiologically relevant hits. Solutions are coming as vendors provide a wider variety of validated reagents and assays and develop software and instruments that are easier to programme for high throughput screening assays. DDW

This article originally featured in the DDW Summer 2010 Issue