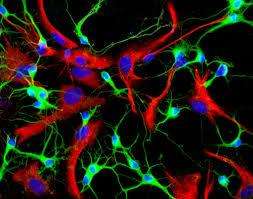 Screening centres in academic institutions and non-profit organisations have, over the past decade, become an established mechanism to exploit novel targets and neglected diseases and to identify chemical probes.

Where centres have a disease focus, their main expertise resides in cancer and phenotypic screens, with screening experience greatest for kinases, phenotypic approaches and protein-protein interactions. Many are also centres of excellence for cellbased screens, particularly those utilising high-content cell imaging.

With success increasingly judged not only on the number of publications accepted in peer-reviewed journals, but also on projects that lead to additional third party funding, the main obstacle facing most centres is underscored, ie how to maintain sustainability of operations. The pursuit of biopharma-academic partnerships could point the way forward, fill the funding hole and enable centres to carve out a niche in conjunction with biopharma.

The past decade has seen the establishment of many screening centres at academic institutions and non-profit organisations with early stage drug-discovery and chemical biology capabilities. Centres operate under various models ranging from full preclinical drug discovery in house to virtual setups with only project management in house.

The source of funding is also highly variable with most relying on institutional funding, the public or charitable sector, others operating as academic-based fee-for-service providers, and some are forging industry-academic partnerships. The number of new centres has grown in recent years with government and charity funding initiatives and has been mirrored by shrinkage in biopharma investment and capacity, as it restructures, consolidates and moves some of its early stage drug-discovery activities out of house.

Academic and non-profit centres for small molecule drug discovery in the US, and more recently in the UK, have been the subject to survey and analysis (1,2). HTStec’s survey (3) of academic outreach and non-profit screening centres carried out in January 2014 was somewhat similar in that it sought to document the current status, operational capabilities, interests, assay readouts, formats, funding, budgets, success criteria and future investments etc of centres globally.

It differed in that the responses to the questions were also tabulated to enable direct comparison (benchmarking) of the screening centres surveyed. HTStec’s report was intended as a reference/resource document that will facilitate identifying screening centres with certain capabilities or interests.

As such the report may be of interest to third parties seeking comparative data and a concise summary of information on academic outreach and non-profit screening (eg large pharma, disease foundations, or philanthropy and patient advocate groups looking for potential screening collaborators/partners; vendors seeking to identify suitable centres; or organisations considering setting up new centres). Although HTStec’s full report contains the all-comparative centre data, in this review we confine the discussion to some of the main aggregate findings and trends.

Prior to the study, around 150 academic or nonprofit screening centres were identified globally from extensive web searches for such facilities, 58% of these facilities were in North America. In the survey 55 screening centres participated and were geographically split: 60% North America; 34% Europe; 4% Rest of World; and 2% Asia (excluding Japan). The majority (56%) of centres surveyed came from the USA. 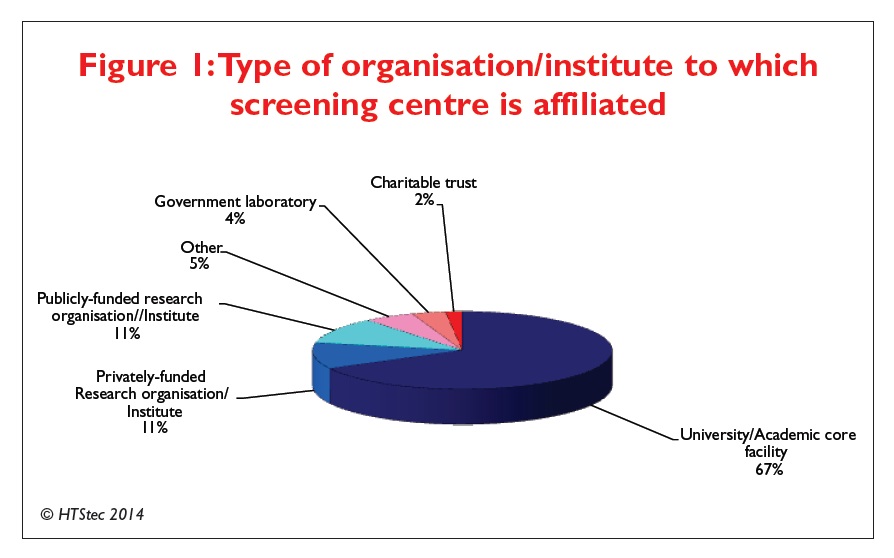 The number of FTEs employed in screening centre operations was a median of six to 10 FTE per screening centre. The make-up of screening centres team/employees (proportion of FTE) was split as follows: 31% screening; 25% assay development; 11% chemistry; 10% project management; 7% logistics; 6% administration; 5% bioinformatics; 3% business development; and 3% other (Figure 2). 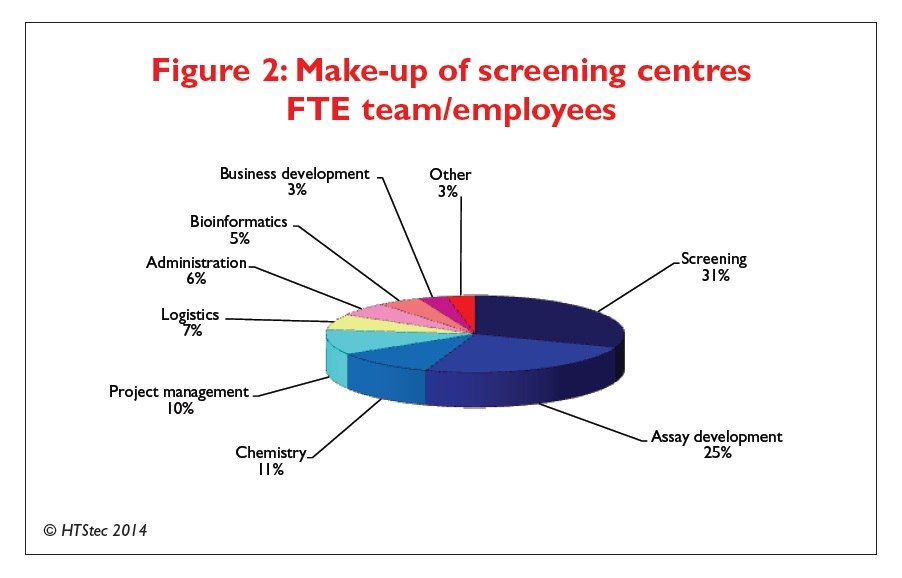 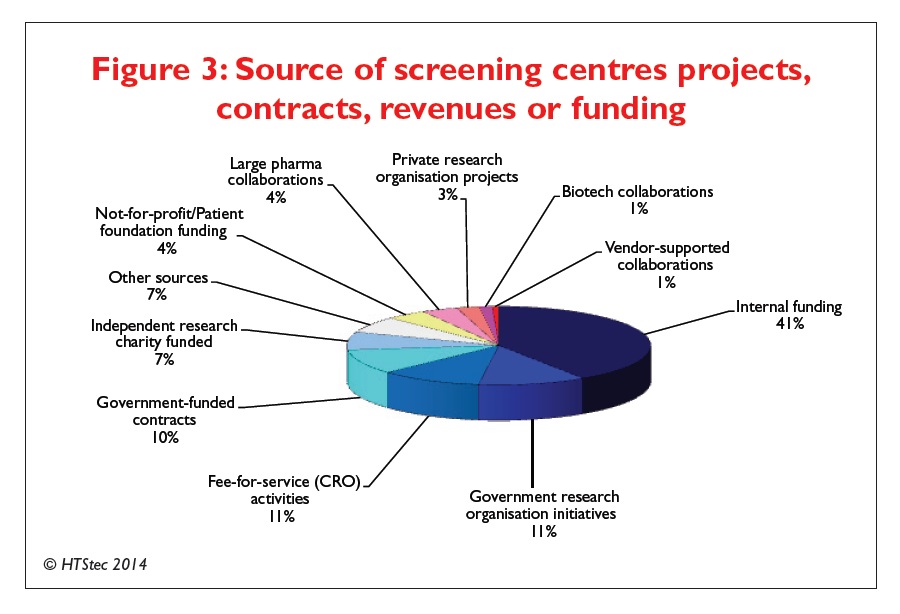 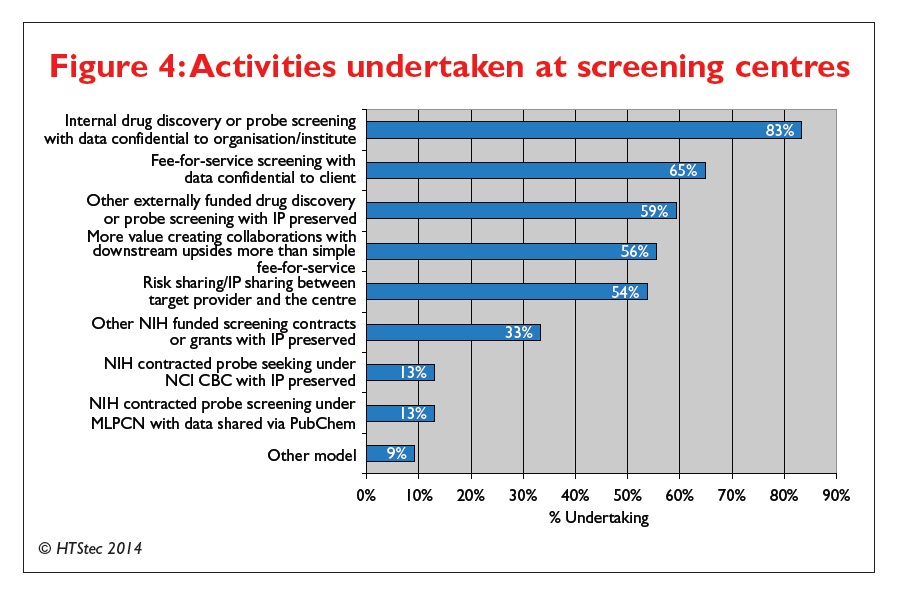 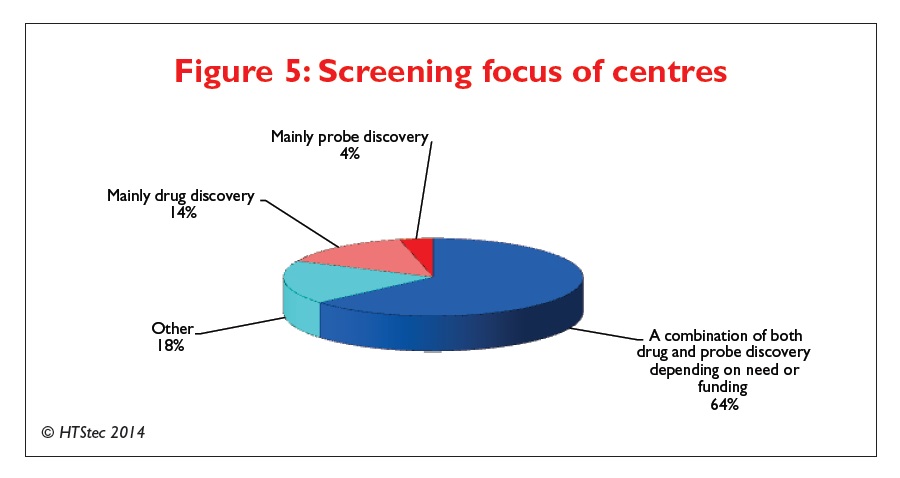 The aspects of screening most supported by screening centres were: 96% assay development; 95% low to medium throughput screening; and 91% supporting both hit validation and prioritisation; and high throughput primary screening (HTS). The activities least supported were in silico/ virtual screening and ADME-tox (both 35% supporting); and exploratory pharmacology (22% supporting) (Figure 6). 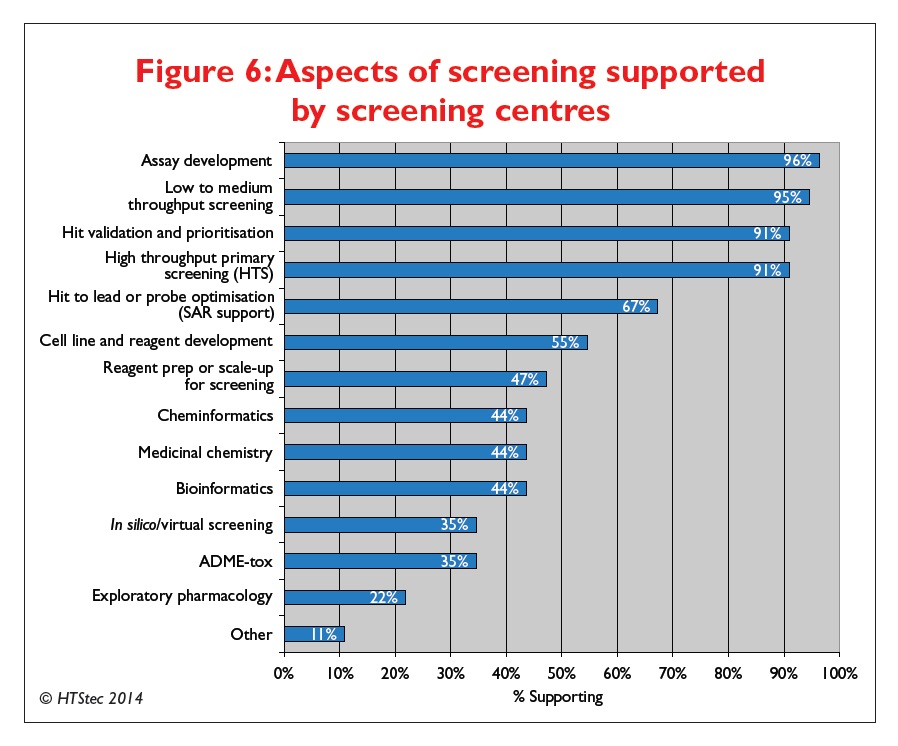 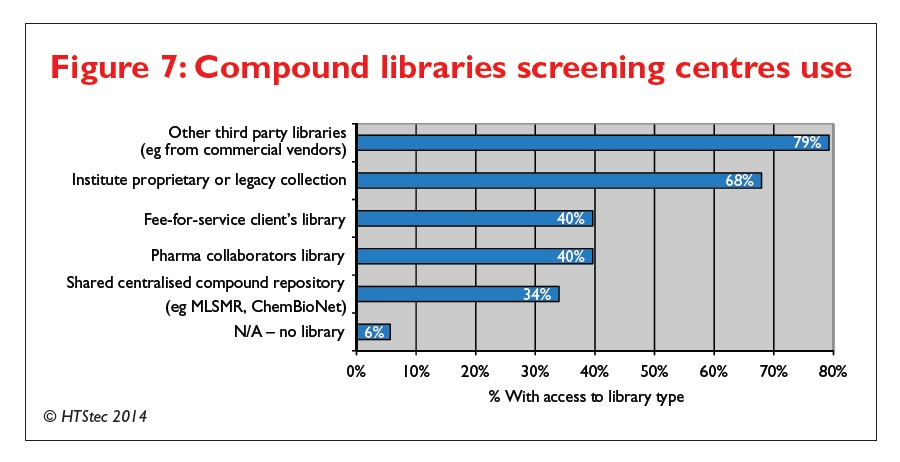 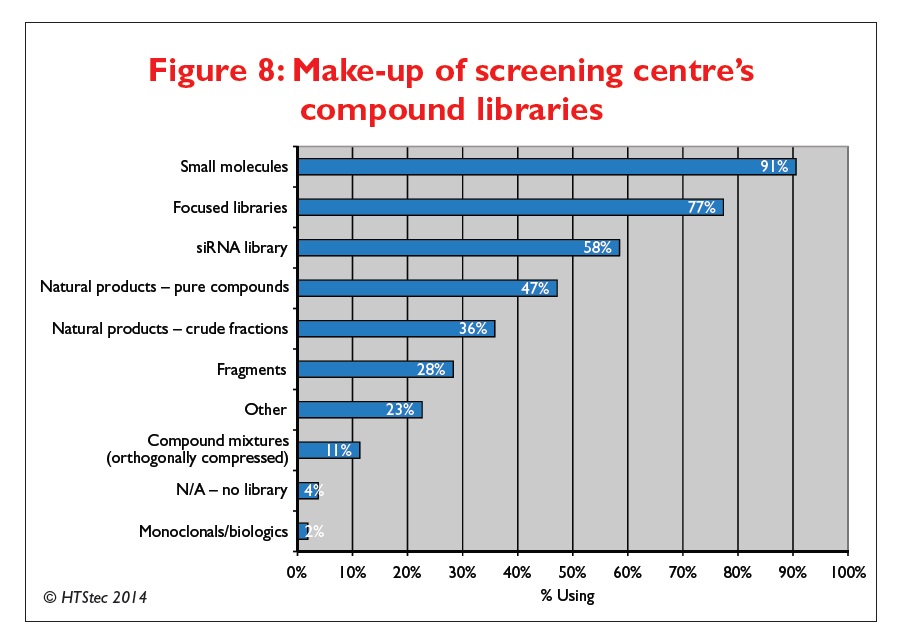 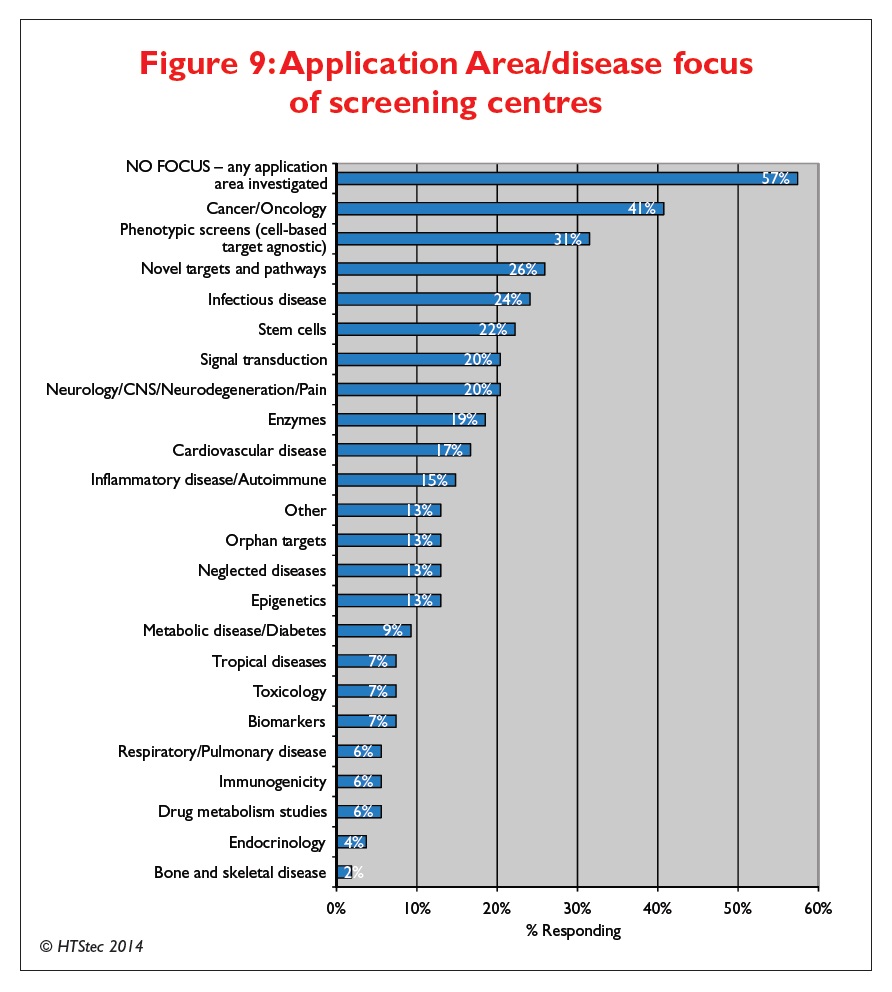 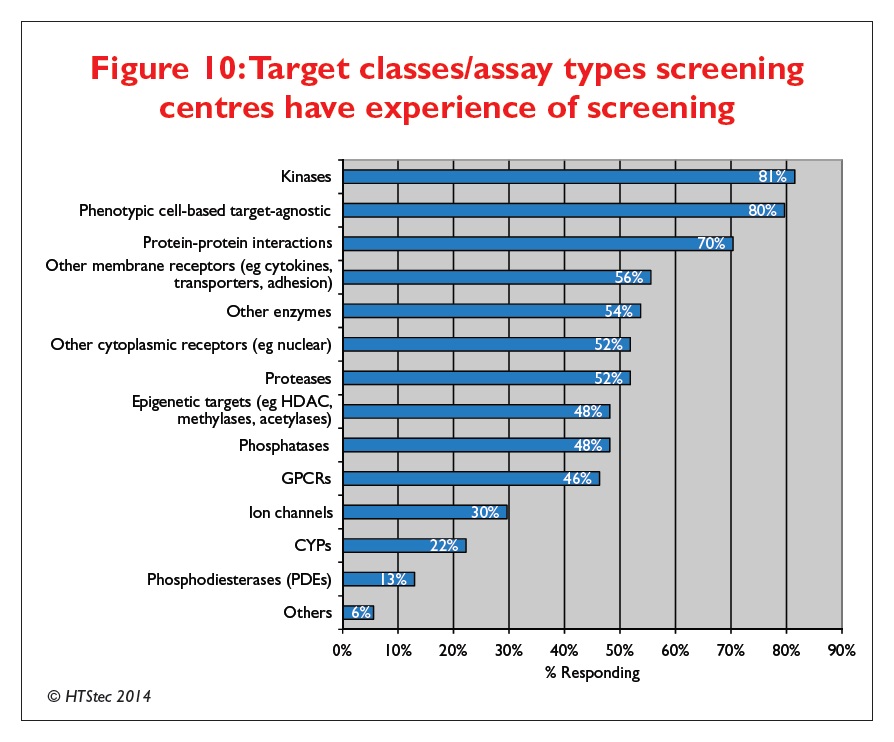 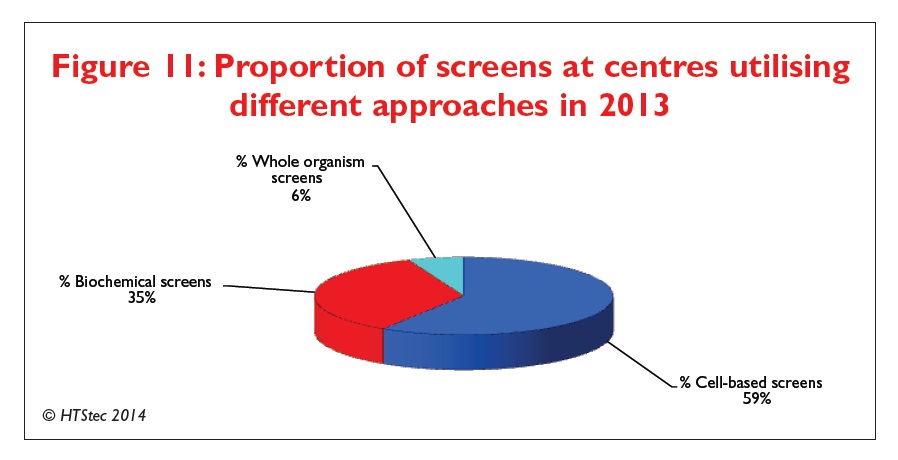 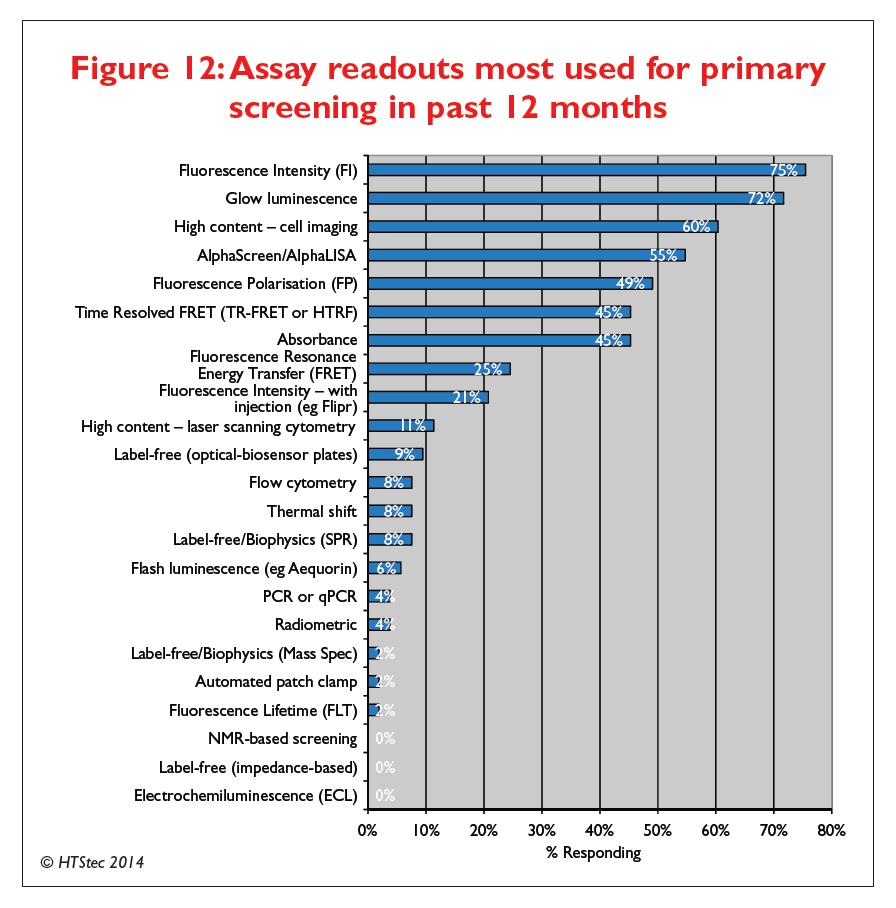 The screening centre’s level of sophistication (ie, its implementation of state-of-the-art instrumentation, screening technologies and approaches) was rated most high with respect to automated liquid handling. This was closely followed by phenotypic screens; high content assays; imaging platforms; and then fully robotic screening systems. Rated lowest sophistication (or least used) was mass-spec based assays and automated cell culture (Figure 13). 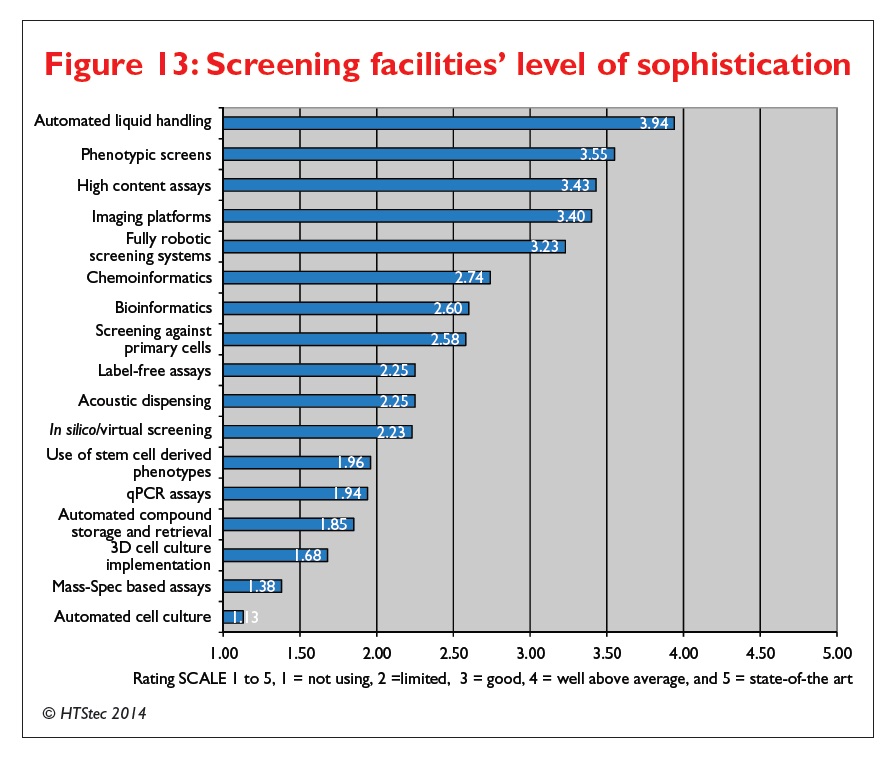 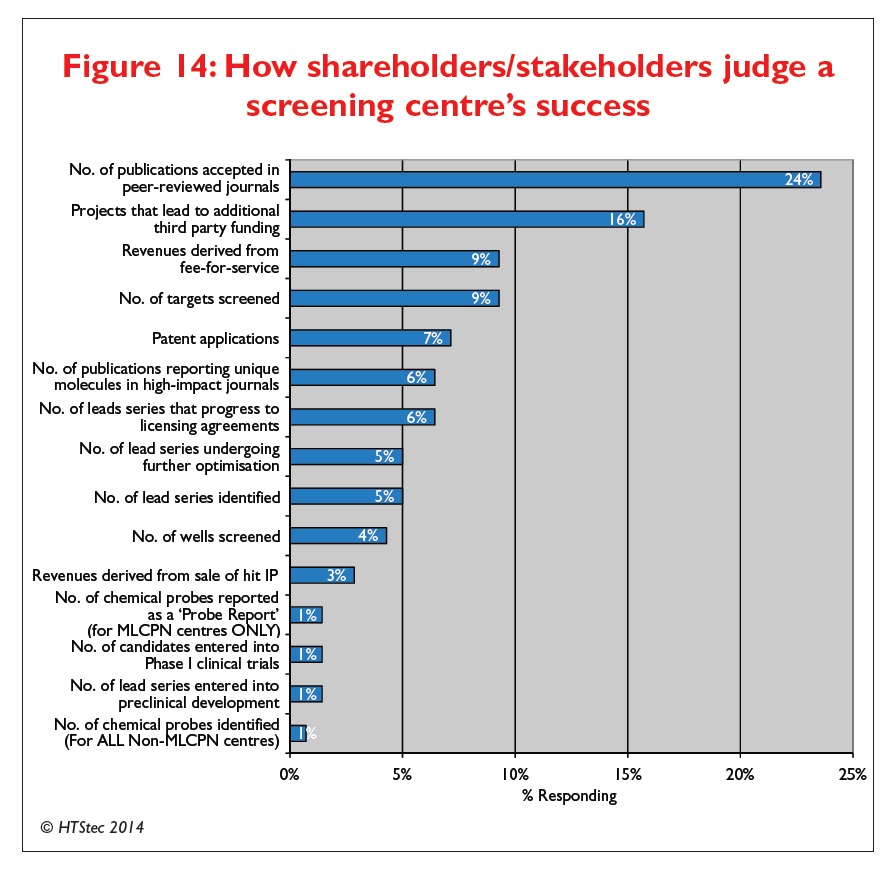 Screening centres made use of the following approaches when taking hits from primary screening forward: 70% explored further by the academic target provider; 56% done by our centre utilising its own chemistry resources; 44% done by our centre using third party chemistry resources; 30% done via a deal with biotech or pharma company who take hits into their in-house programmes; 20% done via a CRO; 16% not explored further by our centre; and 8% other approach (Figure 15). 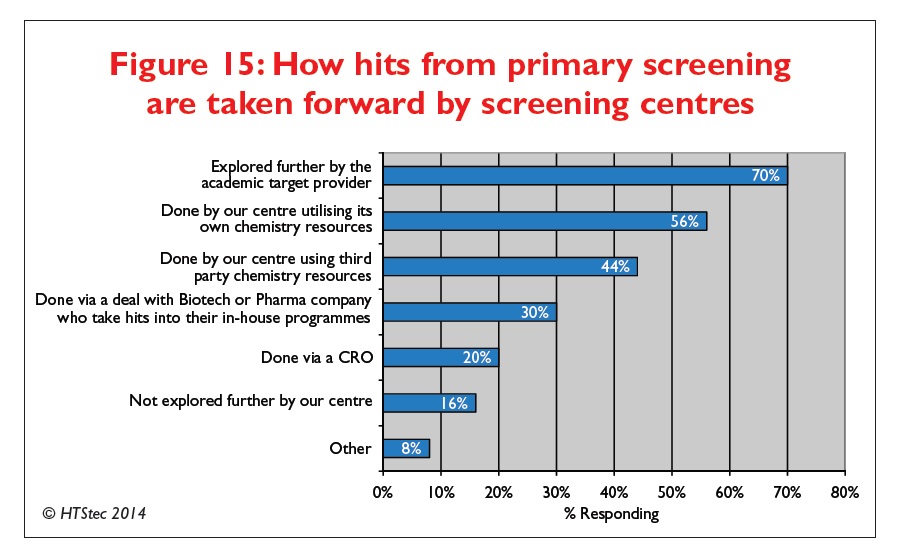 Screening centres rated getting and maintaining funding as the key difficulty (major hindrance) they faced; this was closely followed by too many demands placed on limited resource; and then quality of assays put forward for screening; and the time spent on administration, endless reporting. Rated of least or minor hindrance was too high a hit rate (Figure 16). 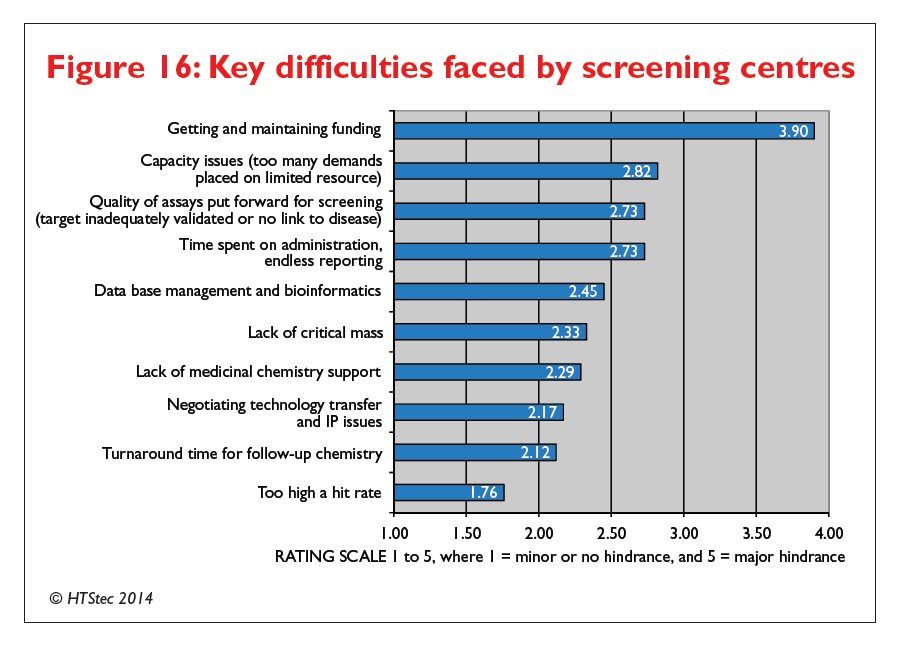 Screening centres ranked new assay technology or approaches where they are making the biggest $ investment for the future. This was closely followed by instrumentation, and then personnel and target biology. Ranked lowest in terms of $ investment were exploratory pharmacology and ADMEtox and then silico/virtual screening (Figure 17). 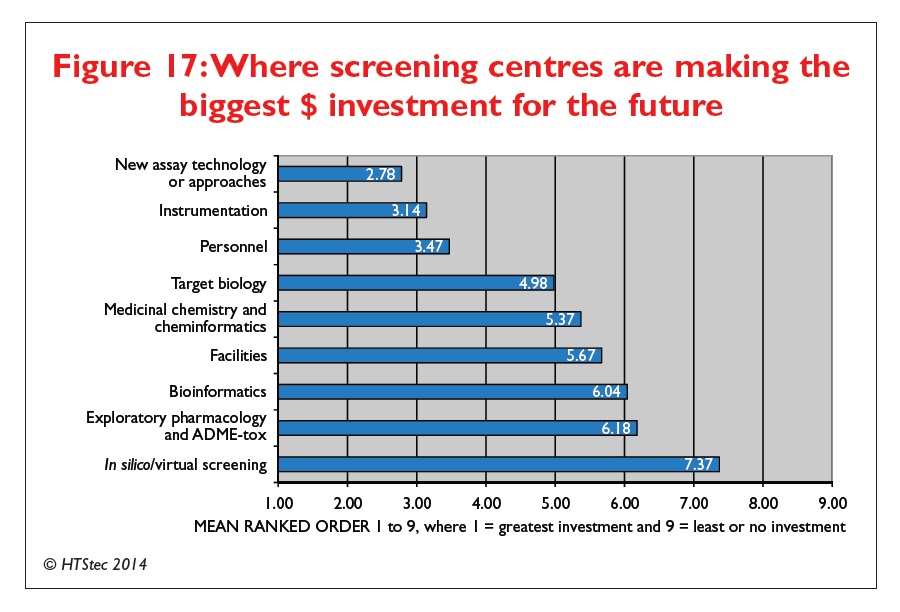 Although most screening centres are affiliated with and partly funded by a university/academic institute, the survey revealed a wide diversity of sources or models for screening centre funding. The proportion of centre FTE devoted to actual screening and assay development seems low at just over 50%, with the remainder having many support or admin roles including some now involved in business development. It is important to note that ‘mainly drug discovery’ remains a minority focus among centres.

Nearly all centres surveyed had screening capabilities, but only twothirds support hit to leads or probe optimisation (SAR support). Small molecule compound library diversity between centres is likely to be low as most obtain or share compounds from the same sources or use commercial libraries. Where centres have a disease focus, their main expertise/interest resides in cancer and phenotypic screens, with screening experience greatest for kinases, phenotypic approaches and protein-protein interactions. Clearly centres give precedence to cell-based screens, particularly those utilising high-content cell imaging.

Interestingly, technologies such as acoustic dispensing, viewed by many today as a critical component to most biopharma screening operations, has so far only been adopted by a minority (29%) of centres surveyed. The main criteria chosen for success (ie the number of publications accepted in peer-reviewed journals and projects that lead to additional third party funding) reflect most centre’s academic background and priorities and are consistent with the finding that most hits are not explored further at the centre.

Getting and maintaining funding was not surprisingly the key difficulty faced by centres. However, most centres prioritise investing in new assay technologies or approaches to maintaining future sustainability of operations.

Recent industry trends such as AstraZeneca’s open door high throughput screening collaborations and participation in the European Lead Factory (4) could point the way forward in industry-academic partnerships. This ‘open innovation’ model brings together the insight and creativity of the academic world with the drug discovery expertise of biopharma.

This article originally featured in the DDW Spring 2014 Issue