Immuno-Oncology’s Biomarker Dilemma: How to add value in an uncertain development landscape 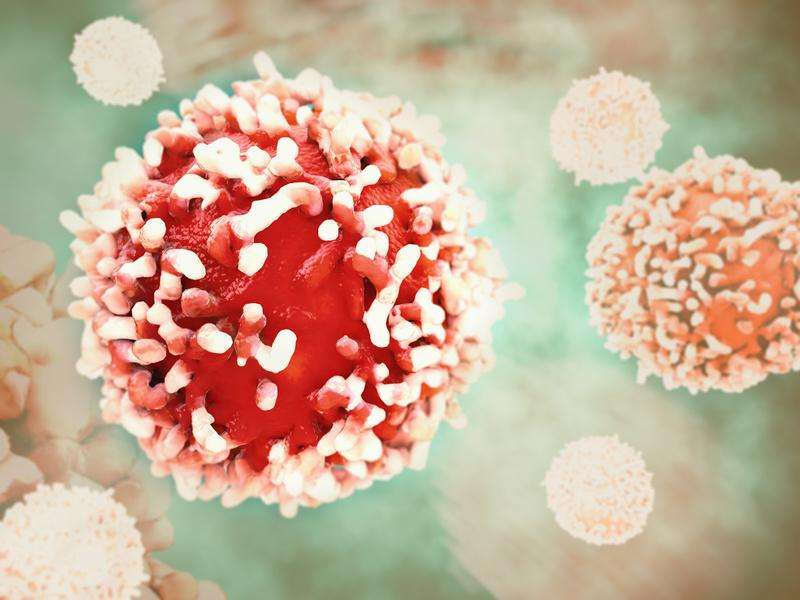 Immuno-Oncology’s Biomarker Dilemma: How to add value in an uncertain development landscape

Given their ability to promote long-term survival in a percentage of cancer patients, PD-1/PD-L1 checkpoint inhibitors have fast become foundational cancer therapies. But knowing which patients may respond to these drugs is challenging, in large part because good predictive biomarkers have yet to be identified and validated.

Understanding the role biomarkers can play in this emerging treatment landscape has large implications, especially for companies seeking to launch new drugs and compete with the market leaders by positioning them in indications where they hopefully show higher response rates. Biomarkers are the best hope for streamlining trials in this way and to help secure favourable pricing.

To date, PD-L1 protein expression is the only validated immuno-oncology (IO) biomarker. But the correlation between identifying the level of PDL1 protein in a tumour as a way of confirming a druggable target and using that information to identify potential responders to treatment is not nearly as strong as it would be, for example, in the context of a traditional targeted therapy.

In the latter case, a patient exhibits a genetic alteration that in and of itself is the hallmark of and becomes a biomarker for the disease state. In addition to identifying eligible patients for treatment, the marker can be used as a tool for confirming that a drug is hitting its target and for helping to calculate an effective and safe dose.

In IO, however, that notion is problematic, owing to the complex nature of the interplay between a tumour, its microenvironment and the immune system and a lack of clarity around what is driving a tumour in a given patient. Drug makers have launched programmes without the benefit of having good predictive biomarkers for patient selection, instead hoping to find such markers retrospectively.

PD-L1 is a relatively poor marker for several reasons. Its expression levels do not always correlate with response, the levels change over time and they may vary depending on exposure to therapy. Indeed, seeing how PD-L1 biomarker testing has or has not been factored into clinical trial endpoints makes choosing among the checkpoint inhibitors difficult.

The approved use of Merck’s Keytruda (pembrolizumab) in first-line lung cancer, for example, is predicated on at least 50% of patients’ tumours expressing PD-L1, whereas no such cutoff exists for its use in melanoma. The pivotal trial of Bristol-Myers Squibb’s Opdivo (nivolumab) in the first-line lung setting took in a broader array of patients (PD-L1 expression greater than or equal to 5%) and missed its primary endpoint in Phase III.

But the disappointment did not topple its status in the market as much as many analysts expected. Roche’s Tecentriq (atezolizumab), for its part, carries a label advising the use of PD-L1 as a complementary biomarker in bladder cancer, meaning the measurement may be informative to prescribers but falling short of directing them to run a test prior to treatment.

The PD-L1 biomarker story is further complicated by the fact that each of the makers of approved checkpoint inhibitors has used a different immunohistochemistry (IHC) assay to measure PD-L1 protein expression and match the result to their respective drugs.

The Blueprint PD-L1 Assay Development Comparison Project, designed to look at the comparability of various PD-L1 IHC assays, showed that for three of them, despite similar analytic performance of PD-L1 expression, interchanging assays and cut-off levels will lead to misclassification of PD-L1 status for some patients.

Other IO checkpoint targets may potentially carry with them mechanism-based predictive biomarkers akin to those found with targeted therapies: OX40 is one example, where agonistic antibodies could be used to target the OX40 receptor, with differences in treatment effects as the receptor density changes – an example not too dissimilar from what we have learned from PD-L1.

But the clinical data thus far presented on that class of compounds, as well as for other checkpoint targets such as GITR and ICOS, has not clearly established their efficacy. For next-generation T-cell based chimeric antigen (CAR-T) drugs, a patient’s cytokine profile may correlate with the efficacy – and importantly, the toxicities associated with treatment – and so may form part of the basis of a biomarker signature. But these drugs also are all experimental.

The level of genetic instability within a tumour, whose measurement may correlate with the degree of lymphocytic infiltration, is the next chapter in the IO biomarker story. In late November, Merck became the first IO drug maker to file for a US regulatory approval using a biomarker other than PDL1. The Food and Drug Administration granted the firm a priority review for a supplemental Biologics License Application for the treatment of previouslytreated patients with advanced microsatellite instability-high (MSI-H) cancer, setting up the possibility of Keytruda gaining a label for MSI-H patients not limited to a specific tumour type.

MSI is caused by a deficiency in a cell’s ability to repair errors in DNA sequence (mismatch repair) that occurs during cell division. Its presence can be determined by a test that compares the length of DNA from markers in tumour and normal cells, producing a profile. Merck has made two MSI-H oriented applications – one for treatment of colorectal cancer, where the National Comprehensive Cancer Network Clinical Practice Guidelines already recommends MSI testing, and another in noncolorectal cancer. MSI tests using either IHC or PCR are readily available.

It may be that MSI-H predicts response regardless of tumour type – a different situation than with targeted therapies, where the initial hope was that a cancer-causing mutation might be targetable across tumour types but the effects of those mutations can often times be tissue specific. BRAF-targeting drugs, for example, are effective in BRAF mutant melanoma but not in BRAF mutant colon cancer.

Combining mutational burden and a gene expression profile (presumably with PD-L1 as a component) could improve the predictive power of IO biomarkers. Patients who are not MSI-H may respond to a checkpoint inhibitor if their tumour is inflamed (namely, that the tumour has already been primed to be attacked by the immune system, including through chemotherapy). Conversely, those who are low on an inflamed tumour score but high on mutational burden can also respond to an IO drug.

Nanostring, Foundation Medicine, Personal Genome Diagnostics and others are developing gene expression profiles for use in immunooncology. HalioDx’s Immunoscore is measuring the densities of tumour-infiltrating CD3 and CD8 cells to provide key information about adaptive immunity to tumours.

Farther down the line, such classifiers could incorporate and/or combine with comprehensive immune profiling of a tumour’s immune status including full transcriptome profiles and proteome analyses. Some people may even respond better to IO drugs because of the particular composition of their gut microbiome, offering up another potential way to stratify patients in clinical trials.

The question for drug developers is how the successful introduction of any of these tools would help a drug maker solidify its position in the market. PD-L1 has largely failed to be a means for product differentiation except in first-line lung cancer. With its recent MSI-H filing, Merck may gain a first-mover advantage. But the long-term effect that the use of MSI-H could confer to one checkpoint inhibitor over another in the class is unclear.

The ability to obtain a differentiated indication will be imperative for new entrants, especially given the commercial clout Bristol-Myers, Merck and Roche already have in IO. They have had time to establish themselves on the market, drive education and awareness and establish other support services. AstraZeneca, whose PD-L1 drug durvalumab has lagged in development, will also likely invest largely to catch up and drive discussions and advocacy around IO biomarkers and testing.

New entrants must be able to clearly differentiate their drugs from those of the market leaders. Further complicating the clinical picture is the awareness that it may be possible to boost response rates by combining the existing approved checkpoint inhibitors with other agents, including targeted therapies as well as other IO agents.

The combination of Opdivo and Yervoy (ipilimumab), for example, received an accelerated approval from FDA for the treatment of metastatic melanoma that does not contain a BRAF mutation. Indeed, many Phase III trials are under way with different combinations and in the not too distant future there will likely be several combinations approved in melanoma and perhaps other cancer types as well.

Having compelling efficacy and safety data in a niche indication, either as monotherapy or, more likely, as part of a combination regimen with another immunotherapy drug, a targeted agent, a chemotherapy, or even a CAR-T, will be essential. As new drugs emerge and indications become more crowded, incorporating exploratory biomarkers will be a key strategy for patient stratification.

With scientific uncertainties and confusion over the eventual shape and potential for immuno-oncology biomarkers – including the technology platforms (liquid biopsy, mass spec, imaging) – new entrants should be actively collaborating on the development of new tools and new exploratory markers. We believe this will be critical for more than supporting the efficacy of a drug; namely, for product differentiation. Unlike in other therapy areas, these collaborative efforts are being spearheaded by pharma as much as by diagnostics companies.

Bristol-Myers’ Opdivo gained the first FDA approval for a PD-1 drug, in melanoma, without need for PD-L1 as a biomarker, followed by approvals in second-line lung cancer and renal cell carcinoma, also without a need for PD-L1 testing. BMS continued to focus on enrolling a broad array of patients into its lung cancer trials. Then its firstline lung trial failed, opening the door for Merck and Keytruda: Now, however, Bristol-Myers appears to be vigorously pursuing biomarker-oriented external collaborations (see Table 1). 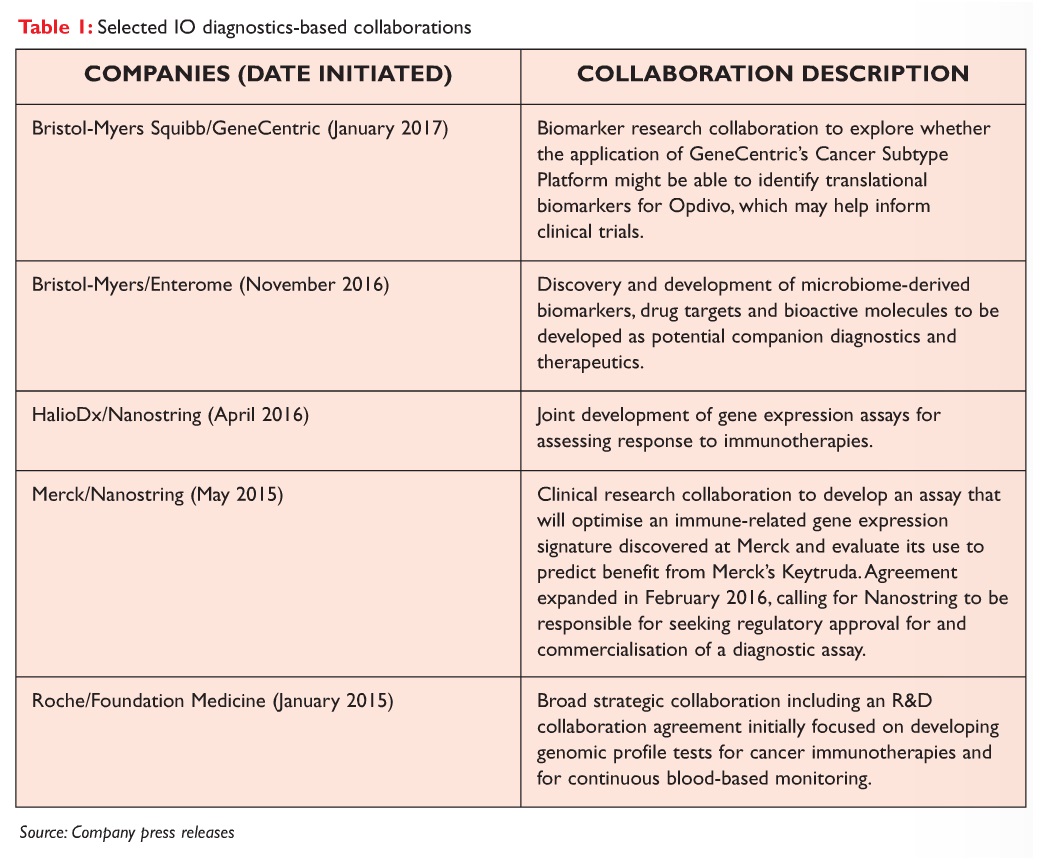 It remains a mixed bag when it comes to indications requiring PD-L1 testing – on March 14, FDA granted an accelerated approval for Keytruda in refractory classical Hodgkin lymphoma without mention of PD-L1 testing. The lesson for biopharma companies is that they may need to take a broad look at a variety of exploratory biomarkers to understand how a product – and the use of a biomarker or biomarker signature in the context of that product – impacts patient care, indication by indication. Larger firms especially need to be prepared for this when conducting retrospective biomarker analyses on sample sets from clinical trials.

Clinicians would like to see a universal test emerge, both for simplicity and clarity in ordering and as a way to minimise tumour sample collection. In the near term, however, the likely scenario is to have multiple tests – some tumour-directed, some to assess the state of a patient’s immune system, and using multiple technology platforms. That is, assuming any of a number of exploratory biomarkers pan out as predictive or valuable for therapy monitoring, especially for combination therapies.

In that kind of Balkanised world, successful IO drug makers must be prepared to provide extensive educational support around when, how and why to use a test linked to their therapeutic. The time to start these activities is now. DDW

This article originally featured in the DDW Spring 2017 Issue

Olivier Lesueur is a managing director at Bionest Partners, working with US and European clients. His expertise includes oncology, vaccines, respiratory, inflammation/autoimmune and the central nervous system. He advises clients on portfolio/franchise strategy, and supports strategy and decision-making in drug development, lifecycle management, corporate development, market segmentation and product positioning