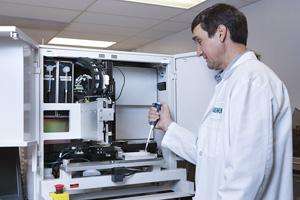 The pharmaceutical industry is striving to develop effective new therapies for diseases, ranging from cancers to cardiovascular and neurodegenerative disorders to a host of metabolic, infectious and genetic conditions, and is placing emphasis on treatments related to the early detection of disease.

The development of new molecular diagnostic methods capable of detecting disease at the molecular level in blood, cerebrospinal fluid, and other body specimens lies at the core of an emerging revolution in disease diagnosis.

Using specific and targeted protein and nucleic acid (ie, DNA and RNA) biomarkers, clinicians will be able to detect diseases and confirm diagnoses very early on. Ideally, clinicians might be able to diagnose even before patients present with clinical signs and  symptoms – when a disease is most amenable to successful treatment.

From early on physicians learn how to detect diseases when a patient presents with easily observed classical signs and symptoms. Also, a host of diagnostic tests, from imaging studies to laboratory-based analyte measurements to biopsy of affected tissues, are available to supplement and support clinical findings and to guide physicians through the decision-making process that leads to a diagnosis and treatment plan. Yet all of these diagnostic strategies are often based on discovering disease that has progressed to the point where it has already caused irreversible damage to organs, tissues and vital biochemical and physiological processes.

There is now potential for the detection of protein and nucleic acid biomarkers with ultra-sensitive molecular diagnostic tools that identify disease- related changes in biomarker levels, before they manifest with advanced clinical signs and symptoms secondary to disease progression. Ovarian cancer, coronary artery disease and Alzheimer’s disease are three potent examples of the need for a paradigm shift in disease diagnostics.

Current assay technologies lack the limits of detection needed to identify biomarkers for cancer in biological samples efficiently, reproducibly and cost-effectively. Ovarian cancer is a good example. In nearly two-thirds of women with ovarian cancer, the tumour is typically not detected until it has progressed to an advanced stage, when the five-year life expectancy is only 12-39% (1,2). Although the fiveyear survival rate for all stages of ovarian cancer combined is only 35-38%, if the diagnosis is made early in the course of the disease, these survival rates can reach 90-98% (3).

Researchers at the Food and Drug Administration and the National Cancer Institute have reported that qualitative mass spectroscopy patterns of proteins in patients’ blood could distinguish between ovarian cancer and control samples (4). Ongoing research is also focusing on a protein called inhibin, which antagonises the action of another protein, activin, and may have a role as a potent and specific biomarker for one form of ovarian cancer (5).

Whereas the CA-125 protein, routinely used to screen and monitor patients for ovarian cancer, can signal the presence of the most common type of ovarian cancer, which are epidermal in origin and which represent about 90% of ovarian cancers, it is not very useful for detecting the 10% or so of granulosa cell tumours. In contrast, inhibin levels are increased in blood samples taken from post-menopausal women with granulosa cell ovarian tumours. Diagnostic test results, combining detection of both CA-125 and inhibin, have been presented that may detect 95% of all ovarian cancers with 95% specificity (5).

Currently, the troponin level rises as heart muscle breaks down but the troponin level cannot be detected as abnormal until the level becomes >0.01 to 0.10ng/mL, depending on the given assay. It takes four to six hours, from the first cardiac symptoms, for the troponin level to rise above this abnormal threshold. The ability to detect an initial burst of troponin from the myocardial cell, appearing in the blood within one hour after MI symptoms, may enable a more rapid diagnosis and subsequent treatment of MI.

Likewise, a more sensitive troponin assay may allow clinicians to differentiate unstable angina (UA) from less dangerous forms of chest pain. Patients who are experiencing UA are at high risk of having another cardiac event within the next 30 days. However, frequently UA goes undetected because troponin levels remain below the current thresholds of abnormality. These UA patients may be sent home without the administration of any form of therapy, often with fatal consequences (ie, up to 10-20% mortality).

An ultra-sensitive cardiac troponin test capable of detecting very low levels of troponin (eg, limit of detection of 0.0001ng/mL) may be useful in the diagnosis of unstable angina and to identify patients that require treatment and hospitalisation even though their troponin level never reaches the current MI threshold.

Alzheimer’s disease often presents with nonspecific cognitive changes and is very difficult to detect in its early stages (ie, mild cognitive impairment, prior to significant beta-amyloid plaque formation). In fact, Alzheimer’s disease currently can only be diagnosed definitively at post-mortem examination.

Promising therapies for Alzheimer’s disease now in development have the potential to be more effective if treatment can be initiated earlier in the natural history of the disease. Neurodegenerative diseases such as Alzheimer’s will likely be more susceptible to drugs capable of slowing their progression at an early stage, thereby prolonging the time between diagnosis and the appearance of more debilitating clinical symptoms that compromise patient function and quality of life.

Researchers at Northwestern University have discovered toxic derivatives of beta-amyloid, one of a family of proteins found in the plaques and neurofibrillary tangles characteristically found in the brains of individuals with Alzheimer’s disease on postmortem evaluation6. Called amyloidderived diffusible ligands (ADDLs), these derivatives are more neurotoxic than beta-amyloid itself and could serve as early indicators of Alzheimer’s disease.

Similarly, a phosphorylated form of the tau protein – also implicated in the brain pathology linked to Alzheimer’s disease – called p-tau-231 may be a more sensitive diagnostic marker than the tau protein itself, as it is a precursor to tau that appears earlier in the course of the disease (7,8). Both of these biomarkers are present in very low concentrations (<1 picomolar) in the cerebrospinal fluid (CSF) of patients with Alzheimer’s disease, concentrations below the levels reliably detectable with available assay technology.

The small sizes of ADDLs and p-tau-231 may allow these molecules to cross the blood-brain barrier, suggesting that it might be possible to develop an assay that could detect their presence in blood. This would allow physicians to rely on a blood sample to diagnose and monitor the disease, eliminating the need for the more complicated, potentially risky and uncomfortable procedure required to obtain a sample of cerebrospinal fluid.

Development of the tools and technology needed to bring molecular diagnostic tests into the clinical mainstream will have a profound effect on the discovery of novel biomarkers, which will, in turn, accelerate drug discovery research, and enhance efforts to screen targeted populations for a variety of common medical disorders and risk factors of disease.

The availability of a highly sensitive, automated, quantitative, cost-effective and easy-to-use diagnostic platform capable of rapidly and reliably identifying both protein and nucleic acid biomarkers (often present in minute concentrations in biological specimens) could deliver the power of molecular diagnostics to both reference laboratories and community hospital laboratories.

In addition, for many disorders, biomarker discovery research, using this tool or other methods, may identify highly specific protein and nucleic acid markers that play key roles in the targeted detection of early stage pathology. Also, molecular diagnostic tools that are capable of performing multiplexed assays – that is, tests that simultaneously detect multiple protein biomarkers and/or genetic mutations (ie, single nucleotide polymorphisms [SNPs] of DNA and RNA) – will save time and resources and, more importantly, allow clinicians to detect patterns of disease-related markers.

Multiplexing will enable diagnoses based on a more informative assessment of panels of biomarkers that could signal the presence of, or predisposition to, a disease and could also provide information on disease stage and aggressiveness that could contribute to the determination of prognosis and the course of effective patient management.

The scientific basis of the technology came from two world-renowned Northwestern University professors, Chad A. Mirkin, PhD and Robert L. Letsinger, PhD. Dr Letsinger is known internationally for developing the chemistry behind the modern day ‘gene machines’. Dr Mirkin is a pioneer in the development of ultra-sensitive and highly selective assays based upon nanostructures.

He is currently the Director of the Northwestern University International Institute for Nanotechnology and is internationally recognised as one of the most influential figures in nanotechnology. Combining their expertise and resources, they developed the foundation for the technology in a molecular diagnostic platform that will soon come to market, including the processes to create the gold nanoparticles.

1) the multiplicity of identical barcodes (about 100- 1,000) released as a result of each target protein molecule that is captured. [Note: multiplexing occurs here by changing the capture antibodies and barcode sequence for each specific analyte in a panel.]

2) a silver-enhanced optical detection method. In comparison with conventional ELISAbased diagnostic assays, the new protein detection technology is 1,000-10,000-fold more sensitive, with a detection limit in the attomolar range.

The need for ultra-sensitive detection of biomarkers was presented above, using only three examples (ie, ovarian cancer, coronary artery disease, Alzheimer’s disease). Actually, of course, there are a myriad of other clinical applications where enhanced diagnostic assay sensitivity could improve the health of atrisk populations world-wide. For example, the following is an incomplete list of general need areas:

For the disease states marked with an asterisk (*) above, companies have either initiated testing of feasibility or are further along in ultra-sensitive assay development. In these assay development initiatives, the nanoparticle probe strategy offers several unique advantages when compared with traditional ELISA assays (for protein detection) and PCR-based target amplification methods (for genetic detection). The strategy eliminates the need for other, more costly and timeconsuming approaches, such as PCR amplification for current genetic detection and qualitative mass spectroscopy or immuno-PCR for current protein detection.

With direct genomic detection – which represents the first commercial application of the nanoparticle probe technology – signal amplification without the need for PCR in an automated, cost-effective system will provide an economically feasible, easy-to-perform method of detecting genomic markers. The first products based on the direct genomic technology will include assays for hypercoagulability, cystic fibrosis and cytochrome P450 enzymes (to assess drug metabolism).

Ultra-sensitive detection of protein and nucleic acid biomarkers will not only enable screening for and early detection of diseases with established diagnostic biomarkers, but will also improve biomarker discovery research for both clinical diagnostic applications and drug development. It will also have a role in advancing pharmacogenomics and efforts to improve blood screening.

As new biomarkers are identified and used in the clinical arena to diagnose, stage and monitor disease, the simplicity and efficiency of ultra-sensitive detection technology should make it possible for smaller, community-based hospitals to access and implement the molecular tools and strategies that are at the forefront of advances in molecular diagnosis, risk stratification of diseases and targeted therapeutics. DDW

This article originally featured in the DDW Winter 2006 Issue

Dr Greg Shipp joined Nanosphere in 2005 as the company’s first Vice-President of Medical Affairs. He was previously Medical Director and Chief Medical Executive at i-STAT Corporation, an Abbott Pointof- Care business. At i-STAT, Shipp was charged with developing a strong working relationship with the medical and clinical laboratory communities and the company’s customer base, including physicians and laboratorians worldwide. Prior to i-STAT, he was Director of Clinical Affairs for Boston Scientific Medi-tech, where he managed the process of obtaining FDA and ethical committee approvals to begin clinical evaluation of a stent-graft for endovascular exclusion of infra-renal abdominal aortic aneurysms. Shipp was Senior Medical Officer at Bio-Reg Associates, where he led clinical studies of Class III medical devices in the areas of ophthalmology, plastic surgery, urology and bone physiology. He holds an MD from the University of North Carolina School of Medicine and MS and BS degrees in biomedical engineering from Northwestern University.