Protein Biochips – On the threshold of success 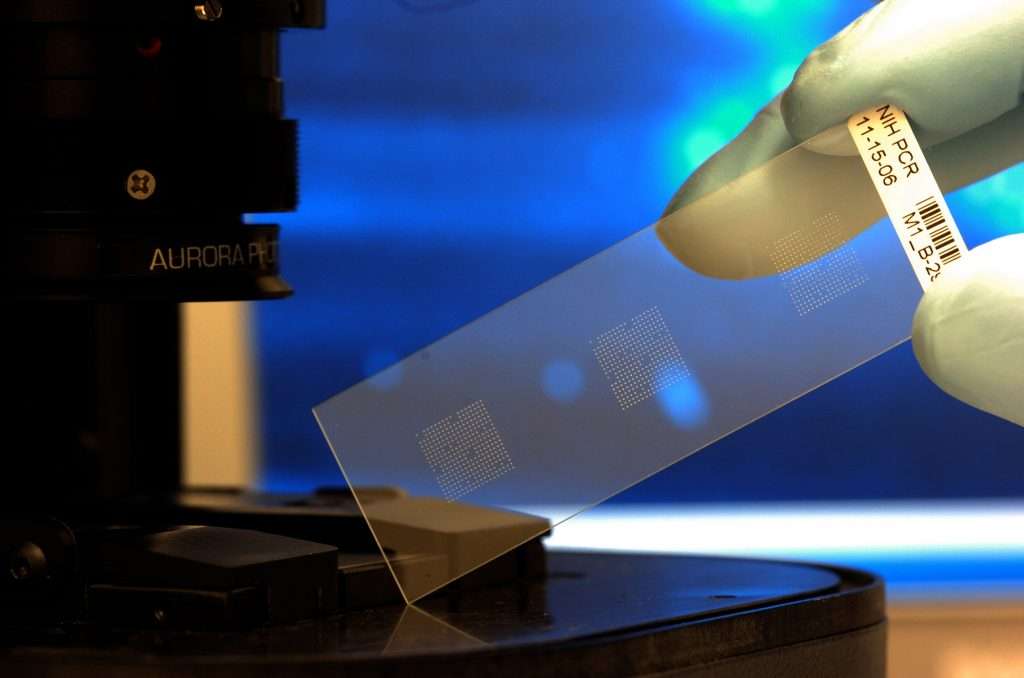 Protein Biochips – On the threshold of success

With sales of protein biochips set to top $700 million in 2006, we present a current overview of this fast moving technology and the applications for the pharmaceutical industry as a whole.

On the surface (pun intended), it appears that the protein biochip is the logical extension of the DNA biochip. Genes code for proteins, genomics gives way to proteomics. This extension, however, will be anything but linear. Nucleic acids have four building blocks, but proteins have 20; genes are one-dimensional codes, but proteins are multi-dimensional enzymes, receptors, and structural components; the genome is a manageable and well-defined collection of approximately 40,000 genes, but the proteome is a loosely-defined collection of hundreds of thousands of proteins (1). The first challenge for protein biochips is to manage this complexity by dividing and conquering the proteome.

The first division is between protein expression and protein interactions. The study of expression asks the simple questions of whether or a not protein is present and, if so, how much. For these studies capture agents, most commonly antibodies, are immobilised on the surface. The capture agents bind the specific proteins of interest in the sample, and the resulting signal is quantified.

The study of interactions asks the simple questions of which proteins interact with which other molecules of interest and, if so, how fast and how long. For these studies peptides or proteins are immobilised on the surface and then other proteins, protein domains, lipids, small molecules or other ligands are added, followed by quantification of the resulting signal.

On the expression side, coverage of the entire proteome is especially challenging because of the limited availability of capture agents. Neither suppliers nor potential customers have large sets of antibodies or other capture agents, which will force the density down into the range of hundreds or even as low as tens of capture agents per biochip. For this density to provide value, the protein biochips will have to be focused on areas of interest for researchers. The most obvious focus is on druggable target classes, such as kinases, receptors and secreted proteins. Another high-value focus is pathways, such as signal transduction, inflammation and apoptosis.

The limited availability of capture agents is a major hindrance to the industry. Several companies, such as Perkin-Elmer, Prolinx, Zeptosens and Zyomyx, have platforms that have been launched or are nearing launch, but the rate of commercialisation has been held back by the content problem. Other industry participants are attacking the content problem directly by attempting to boost production of capture agents. 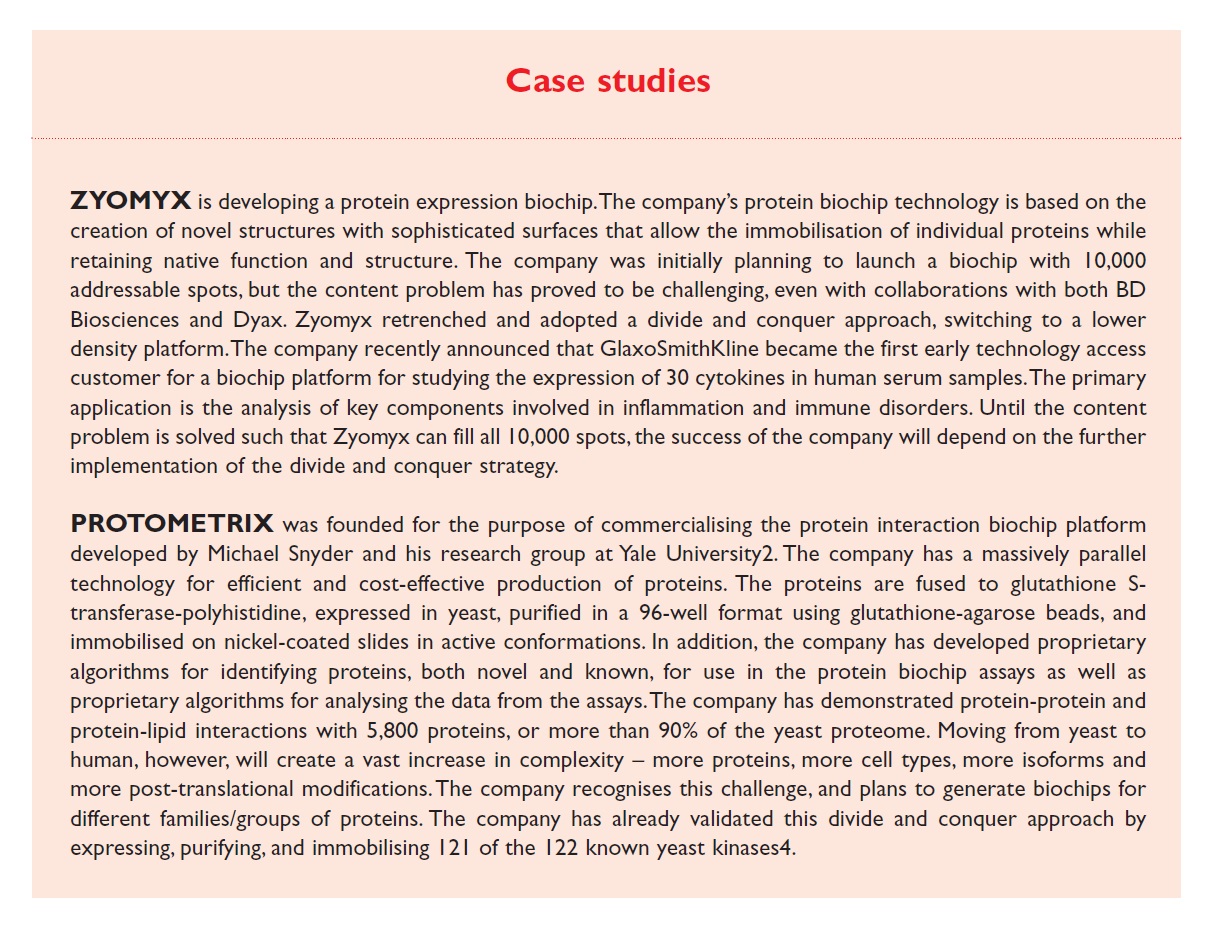 One approach, led by companies such as Cambridge Antibody Technology and Dyax, is to bypass the slow and laborious method of producing monoclonal antibodies in animals and use combinatorial and phage display methods instead, but generating high-affinity binders can take multiple rounds of engineering. Another approach is to develop entirely new classes of capture agents, such as ribozymes from Archemix, molecular imprints from Aspira Biosystems, fibronectins from Phylos and aptamers from SomaLogic, but the ability to generate large numbers of high-affinity binders has not be definitively demonstrated.

If the content problem can be overcome, there are multiple drug discovery and development applications for expression biochips. In drug discovery, researchers commonly investigate the roles of protein classes and protein pathways in disease processes. Current methods, such as mass spectrometry and 2-D gel electrophoresis, are low-throughput and can be cumbersome, which creates enormous opportunities for a versatile, high-throughput system.

In drug development, researchers are very interested in finding molecular markers for toxicity and efficacy. In the ideal case, the researchers would be able to rule out toxic compounds and rule in efficacious compounds as early as possible, thereby greatly increasing the probability of success in expensive clinical trials. These molecular markers have yet to be determined, but demand is high to search for them, creating near-term opportunities. Long-term opportunities will depend on the success of developing the markers.

Expression biochips could be incorporated quickly into research and development programmes because DNA biochips have already opened the doors. Scientists have years of experience generating and analysing gene expression data, and the transition to protein expression data should be straightforward at least, or possibly even liberating. DNA biochip users often have difficulty analysing the tens of thousands of data points per experiment, especially in terms of finding the biological significance.

Expression protein biochips, by contrast, would have fewer data points to analyse, and the proteins are one step closer to cellular functions, greatly increasing the likelihood of finding the biological significance. The number of expression chips used will depend on specifications and cost. The single most important specification for potential customers is the ability of the capture agents to bind their ligands in a linear fashion under the same conditions across the entire biochip.

Meeting this specification requires a laborious trial-and-error approach to selecting monoclonal antibodies, although the ability to engineer capture agents may help with this process if they can be selected in parallel under the same conditions. Other important specifications include sensitivity and dynamic range, but the exact requirements depend on the measurements and the applications.

Even if all of the desired specifications are provided, however, researchers will not use the biochips in large numbers if the costs are too high. The researchers will be driven to other less expensive methods, such as ELISA assays or bead-based detection systems. In fact, the lower the density of the expression biochip, the more attractive the other methods will be.

Protagen, for example, routinely expresses and purifies more than 10,000 unique human proteins, and Protometrix has expressed and purified more than 90% of the yeast proteome (2). Even with these large numbers, however, the best practices can only cover a small fraction of the human proteome. Focus will be critical, and druggable target classes and pathways will again provide the value.

If the development of content for interaction biochips continues on its current rate of progress, the biochips should be in use for a wide range of drug discovery and development applications within one to two years. In drug discovery, identifying the role of proteins in pathways is critical, providing identification and validation of promising targets. Current methods for studying protein interactions, such as yeast two-hybrid and immunoprecipitation, are low-throughput, slowing down the research. Protein biochips would provide a much faster platform for generating valuable interaction and pathway data.

If, for example, a protein occupies a ratelimiting step in a pathway that is specific for a disease, it will likely be a valuable drug target. If, by contrast, the protein only plays a minor part in a ubiquitous pathway, it would likely be a poor target, and possibly even a dangerous one. In drug development, the interaction biochips could play a significant role in lead compound optimisation. Lead compounds could be evaluated by an interaction chip for specificity and selectivity in binding to drug targets, thereby decreasing the likelihood of unforeseen and potentially toxic side effects.

The rate of incorporation of expression biochips into research and development programmes is difficult to project at this time. Unlike the smooth transition from gene expression data to protein expression data, the transition to interaction data will be quite abrupt. Scientists have little experience with high-throughput studies of interactions and pathways. Analysing the data, designing follow- up experiments, and uncovering the biological significance is likely to be a trial and error process, especially in the beginning.

This potential for slowing down the rate of incorporation, however, is likely to be balanced by the ability of the expression biochips to provide data that could not otherwise be obtained. BioInsights projects that this balance between novelty and enabling will make scientists cautious at first, but as soon as the technology is proven, the adoption will grow rapidly.

The use of interaction biochips will also be determined by the specifications and the price. One of the most important specifications will be density, because the interactions occur in vitro, and the more controls and cross-correlations the better the quality of the data. In addition, the higher the density, the greater the differential between competing methods that are low throughput and the lower the price sensitivity. Another important specification is the ability to retain the active conformations of the immobilised proteins to increase the physiological relevance of the interactions. The more closely the interactions mimic those occurring in vivo, the more valuable the data.

Despite the challenges in covering the proteome, BioInsights is extremely optimistic about the opportunities for the protein biochip market. With at least 25 companies either selling protein biochips today or preparing to enter the market within the next two years, sales in this industry are poised for enormous growth. According to our most recent market report, the sales of protein biochips will top $700 million in 2006, almost a 10-fold increase from sales of $76 million in 2001 (Figure 1) (3). 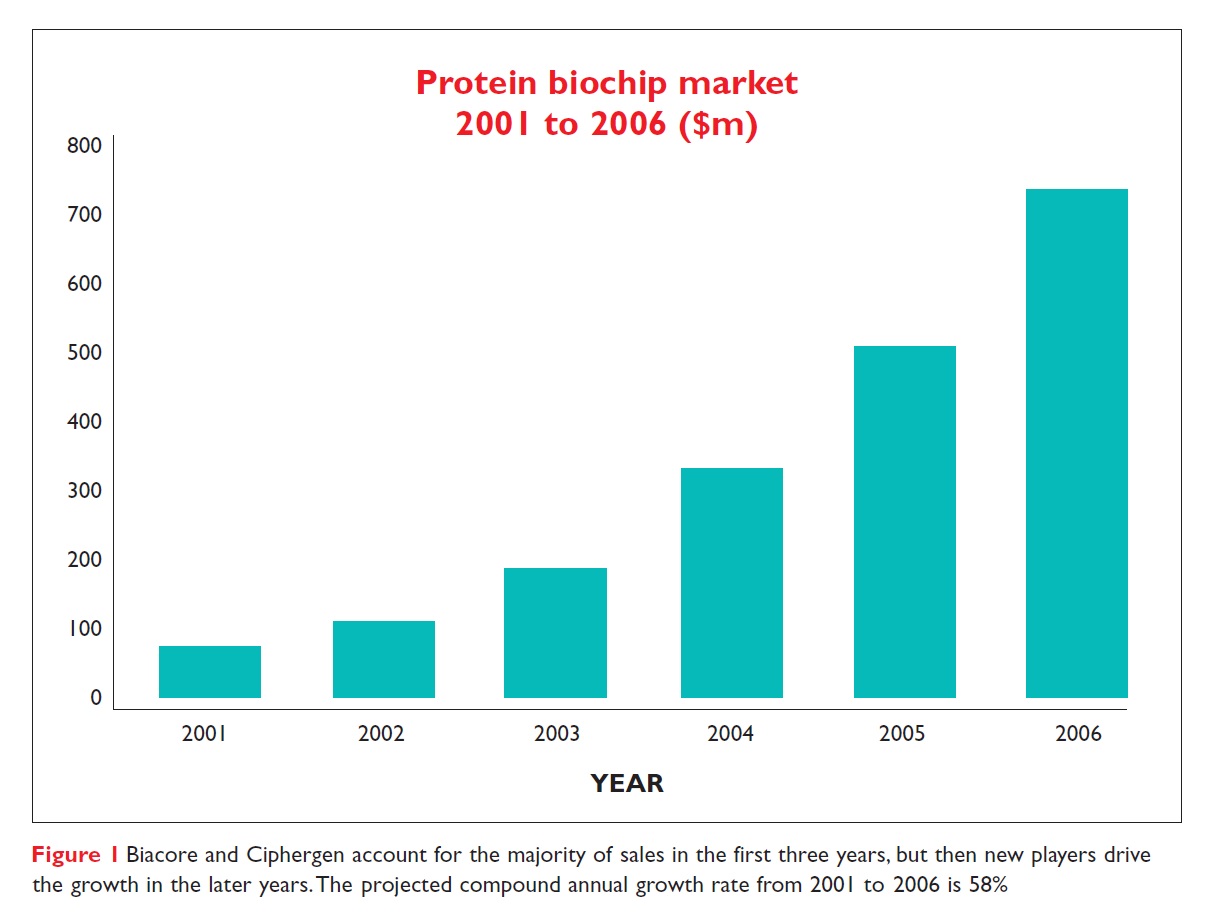 Dr Steven Bodovitz completed his PhD in neuroscience from Northwestern University in 1996. Following graduate school he became a business consultant to biotechnology and pharmaceutical companies before co-founding BioInsights in 1999. At BioInsights he has been the lead author on multiple market reports, including ‘Biochips: From Hype to Reality’, ‘Protein Chips: On the Threshold of Success’ and ‘Profiting From Biological Complexity: The Emergence of Systems Biology’. In addition he has worked with numerous biotechnology and biopharmaceutical companies to assess their market opportunities and optimise their

Felicia Gentile has a masters degree in epidemiology from the University of California at Los Angeles and a BSc in microbiology from California Polytechnic State University at San Luis Obispo. She is currently President and co-founder of BioInsights working closely with Fortune 500 companies, as well as startup ventures, to address the strategic business and marketing challenges facing developers of new technologies for use in drug discovery, biotechnology research and clinical markets. In recognition of her expertise in evaluating new technologies, Felicia serves as a member of the Source Evaluation Board for the Advanced Technology Programme of the US Department of Commerce.

3 BioInsights,“Protein Biochips: On the Threshold of Success” March 2002.