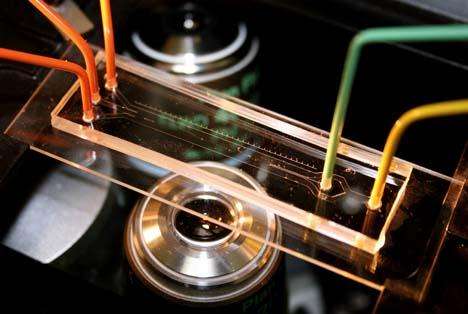 The proliferation of lower cost genomics tools, and the maturing of microfluidics lab equipment into more robust tools that better interface with established research flows, could drive microfluidics devices for pharmaceutical and biomedical research to close to a $1.2 billion business over the next five years, according to our projections.

Though microfluidics technology has been hyped as the next big thing for more than a decade now, its diverse range of niche products remain little visible. One of the most common questions we are asked is if microfluidics is going to become a real market. A wide variety of microfluidics devices – ranging from disposable bedside blood tests to drug inhalers to gene sequencers – reached some $1.4 billion in total sales in 2011.

Note that this figure includes the microfluidics devices only, not the value of chemistries or the instrumentation of the complete microfluidics research tool system. And we see the big new inflow of investment dollars from major diagnostics companies now starting to accelerate growth of the microfluidics market, which we project will average a compound 24% growth annually, to approach $4 billion by 2016. The systems business around these devices is of course much larger, estimated at some $12 billion in 2010. Yole Développement (Lyon, France) focuses on the device side, as part of its focus on micro technologies (Figure 1). 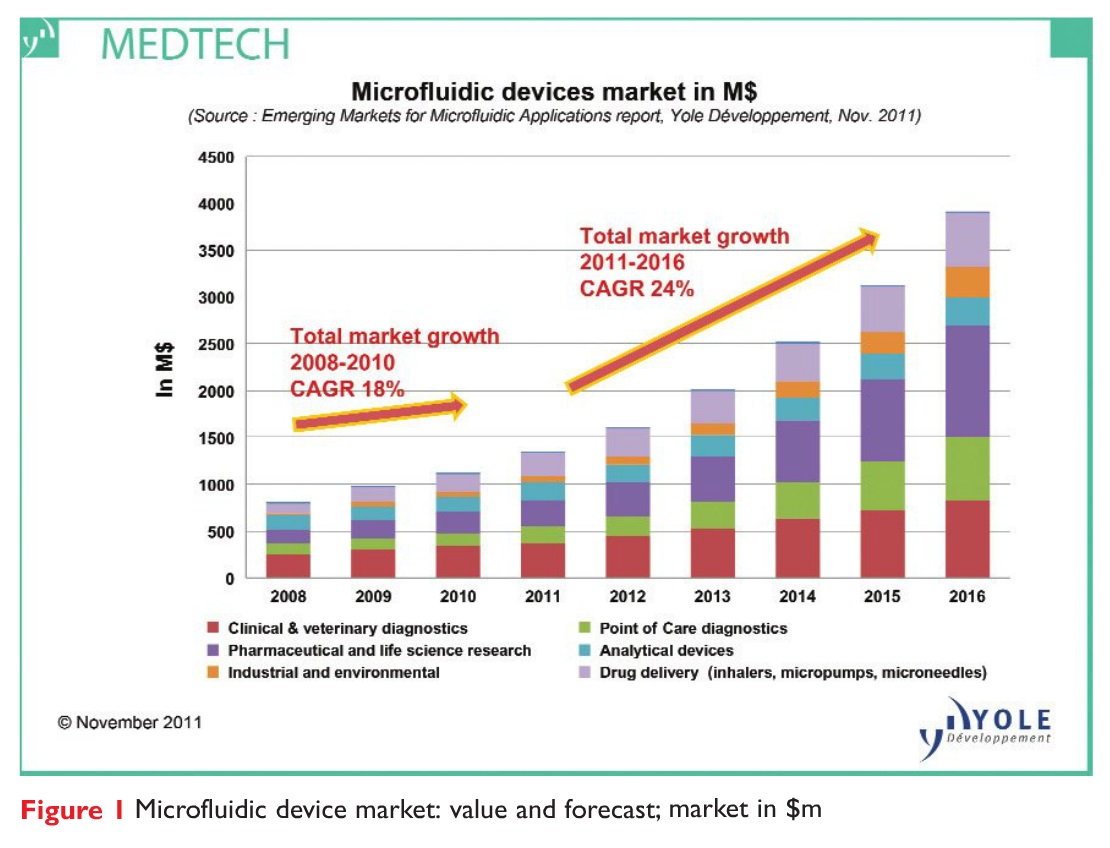 Pharmaceutical and biomedical researchers will already use some $365 million worth of microfluidics devices this year, as they move to micro scale processes for better control, lower cost and faster results at many steps across the drug development process. This figure includes microfluidic chips for miniaturised cell-based assays, genomics and proteomics. In addition, pharmaceutical laboratories also use micro reaction systems and dispensing tools based on microfluidic technologies (Figure 2). 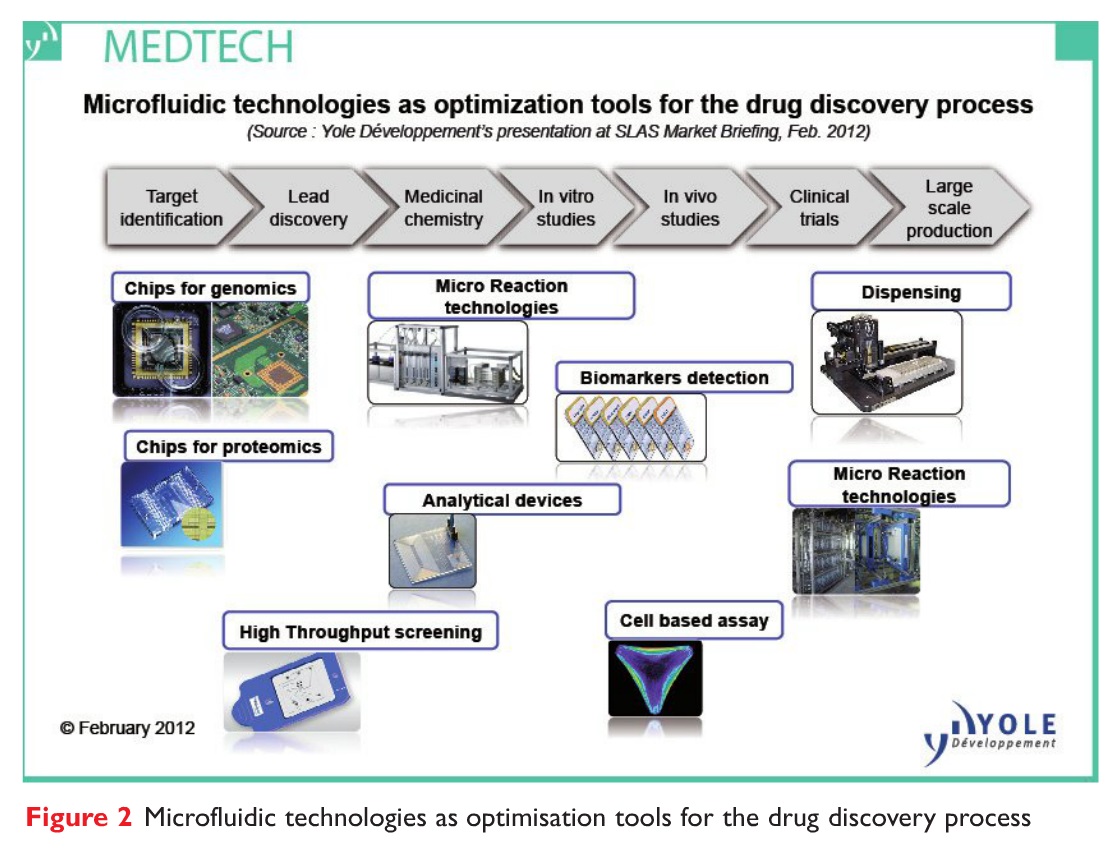 Indeed, already in common use, though many may not think of it as microfluidics, are the systems for dispensing and spotting reagents across well plates, which use inkjet-like microfluidics technology to apply very precise amounts of liquid across an array at high speed from major suppliers Scienion, BioFluidix, Shimadzu Biotech and Seyonic.

Laboratories of at least nine of the top 15 pharmaceutical companies, including Pfizer, Novartis, Merck, GSK and Sanofi-Aventis, are now using micro reactors, which allow tight control of all the parameters in a reaction, to better understand and control the quality of the product or the production process. The microchannels and microchambers enable mixing the reagents in a very consistent continuous process, without the variation in temperature, mix or pressure that can occur in a batch process.

The ability to control temperature makes the approach particularly useful for exo-thermic or energetic reactions, eliminating the need to resort to work-arounds like over cooling the vessel that can lower throughput and yield with the usual batch processes. Continuous reactions by microfluidics are also particularly useful for reagents that degenerate quickly.

Upfront costs have been an issue, though total costs will typically be reduced by the faster return on investment. Though the capital expense of these tools can be up to perhaps 50% higher, a number of studies show that they can reduce total chemistry development cost by 20%-30%. But adoption also requires a major shift in thinking to move from batch to continuous processes, and most usage to date of the microreaction systems remains for research, not production.

A spate of recent new product introductions have increased the wide range of price/performance options available from major R&D system suppliers such as Syrris, Ehrfeld, Little Things Factory and Chemtrix and others even further, and the lack of available benchmarking between different solutions for any application can be the major issue in choosing a system (Figure 3). 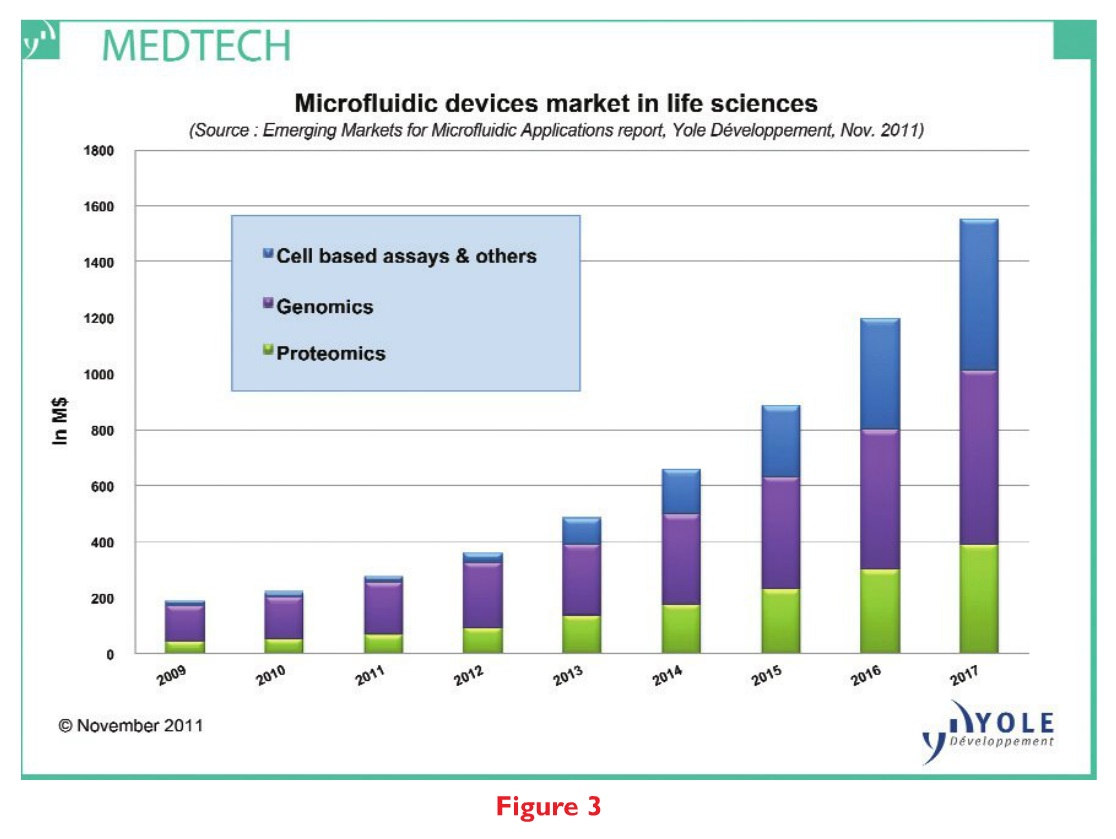 Microfluidics are also proving to be an economical high speed solution for screening one sample against a large panel of reagents in testing for toxicity or looking for biomarkers, whether testing the reaction of one drug against many different bacteria or cells, or one cell against many different possible markers, and their cross interactions. Though the general steps and basic hardware may be fairly standard, the chemistries and specific process details are uniquely developed by each user lab, so these remain still very custom research tools, produced in small volumes and at high cost.

But that is starting to change as the major microfluidics providers in this field such as Raindance start to understand that researchers are not technicians who will spend time to make the tools work, but need robust products that can plug directly into their established research flows. Since the labs have their database of reagents in well plate format, the microfluidics systems need to be made to interface directly with standard well plates, feeders and microscopes to be easily useable.

The biggest sector converting to microfluidics, however, is that for biomedical testing, including genomics, proteomics and cell assays. Here the main driver is developments in semiconductor-like micromanufacturing technology that enable scaling down feature sizes to make higher density chips that can process more material faster – quite the opposite of the low cost consumables driving demand for point-of-care diagnostics in the other end of the microfluidics market.

Genomics chips powering the DNA analysis and gene sequencing tools are the complex and costly high end of the microfluidics spectrum, and their high prices – compared to say disposable point of care test cartridges – mean they already account for a major portion of the market for microfluidics devices for research.

As it has proved hard to find actionable information in the great complex of genetic data, and government funding for this basic research has shrunk, interest has turned instead to simpler, lower cost sequencing tools for investigating more manageable questions that don’t need whole genome’s worth of data, such as identifying strains of bacteria, or finding mutations related to cancers in targeted segments of DNA strands.

While innovative new technologies and rapidly falling prices are spurring growth here, it is not yet clear how big a business this will be, or what will turn out to be the best approach. The established full-genome sequencer supplier Illumina has stepped up its game with faster tools based on its bead-array technology, using micron-scale beads of silica covered with oligonucleotides that act as the capture bases for its assays.

The beads self-assemble in wells on silicon slides or microfibres, reagents are washed over them to react with particular tagged bases, the resulting optical signal is captured, that reagent is washed away and the process repeated with the next reagent.

Challenger Pacific Biosciences instead uses ultra high resolution microscopy made by micromaching to see the DNA replication directly, one base at a time, eliminating the need for time consuming amplification of the DNA, for exposing amplified DNA to one reactant at time, and for washing it away between steps. Though not efficient for sequencing the full human genome, this approach is fast and affordable for looking at small genomes or targeted sections.

Meanwhile, Life Technologies’ Ion Torrent now claims some 1,000 of its low cost (~$150,000) sequencers are in labs worldwide, using a conventional semiconductor technology to make sensors under its array of microwells that directly sense the hydrogen ions given off by the reagent reactions for each base, eliminating the need for optical markers, and allowing semiconductor-industry type scaling to more and more wells and sensors per chip to rapidly drive down costs. The company claims new panels allow researchers to sequence some 190 amplicons and confirm mutations within one day, compared to weeks with PCR or hybridisation-based capture.

But the next hot topic in sequencing is nanopores, for systems like those from Oxford Nanopore that read the distinctive electrical signals from a strand of DNA directly as each base passes through a tiny hole in a membrane and disrupts a current flow, without need for amplification or optical markers. The initial systems use protein membranes grown by bacteria, but inorganic films of graphene or semiconductor materials, such as being developed at Harvard and IBM, could well ultimately be cheaper and faster.

Microfluidic proteomics devices are also increasingly being used to identify and quantify proteins, and to study their interactions, by multiplexing different proteins with reagents in arrays. One major player here is Fluidigm, whose clever system of micro or nano channels made of elastomeric rubber that deflect and close under pressure creates an effective, low cost valve. Miniaturised cell-based assay chips are finding applications in patch clamps, gene transfection, HTS screening and shear flow analysis as well as cell assays.

These systems essentially use microfluidic systems to grow cells, isolate them and then move and test them individually under controlled conditions that can be very close to those of a living organism. Players here with particularly interesting technology include the University of Toronto, which uses a droplet-based system to allow very flexible manipulation, and Cellectricon, a pioneer in the automation of ion-channel analysis on the Dynaflow microfluidic platform.

Diagnostics are actually a bigger driver for microfluidics adoption than pure research, with their potential to significantly reduce costs and get fast results with compact integrated systems, low cost consumables and quick turnaround on standardised screening tests. Real applications of microfluidics are steadily getting market traction here. Abbott Point of Care has more than 50,000 of its i-STAT handheld microfluidics-based blood testers in the field, which ran some 35 million bedside tests in 2011.

Alere is selling 2 million of its drug abuse tests a year, at $47 each, as well as another 2 million of its T-cell CD4 tests. Abaxis has more than 7,000 systems sold, doing 1.5 million blood chemistry panels. Cepheid has grown a >$250 million business with its automated microfluidics polymerase chain reaction system, supplying fast screening and diagnosis for MRSA infections in hospitals.

Also propelling this diagnostics market is a big wave of investment. The top 15 big players who dominate the diagnostics markets – typically very conservative at taking risks on new technologies – are all now involved in developing microfluidics products or investing in acquiring companies that do. They invested more in microfluidics technology in the last three years than they did in all of the previous 15.

Microfluidic technology is now used in only about 20% of point-of-care testing, but with first volume applications now proven, and its clear potential cost advantage, we expect it to jump to 40% of all applications by 2017. DDW

Frédéric Breussin is Business Unit Manager, MedTech at Yole Développement and is an expert in Microfluidics for diagnostics and life sciences. He has supported many companies in their innovation and product development strategy in making the bridge between micro systems technologies and their applications in life sciences, diagnostics and medical device industries. He holds an Engineering diploma from INSA Rouen and a DEA in fluid mechanics from University of Rouen.