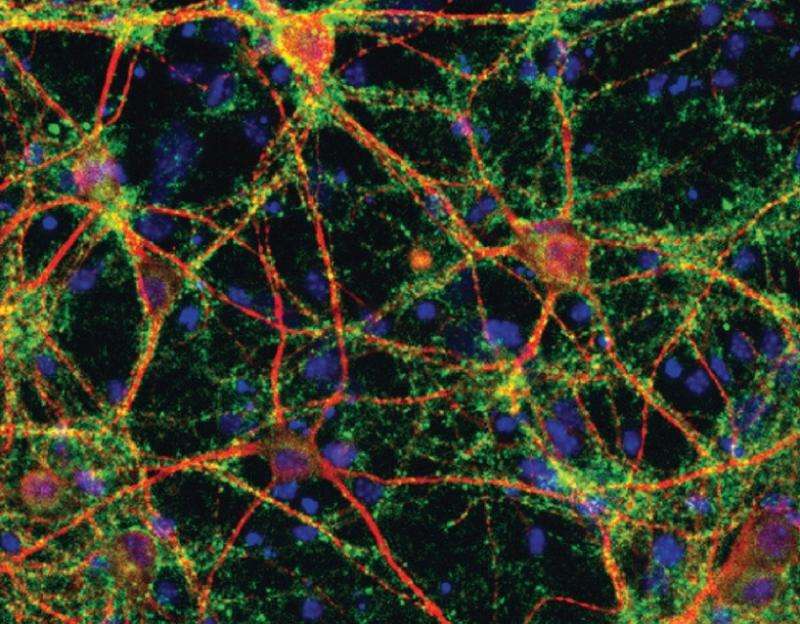 The multiplexed assay is a technique used increasingly in high throughput screening (HTS) labs to study the complex environment of a target, according to HighTech Business Decisions’ (HTBD) industry report High Throughput Screening: New Strategies, Success Rates, and Use of Enabling Technologies.

Fifty-five directors and managers at pharmaceutical, biotech and non-commercial HTS labs were extensively interviewed about their drug discovery efforts in the industry study. About half of the directors report using a multiplexed format in their high throughput screening. This represents a 55% increase in a two-year period. The study finds that the use of multiplexed assays as a percentage of high throughput screening has also increased, see Figure 1. 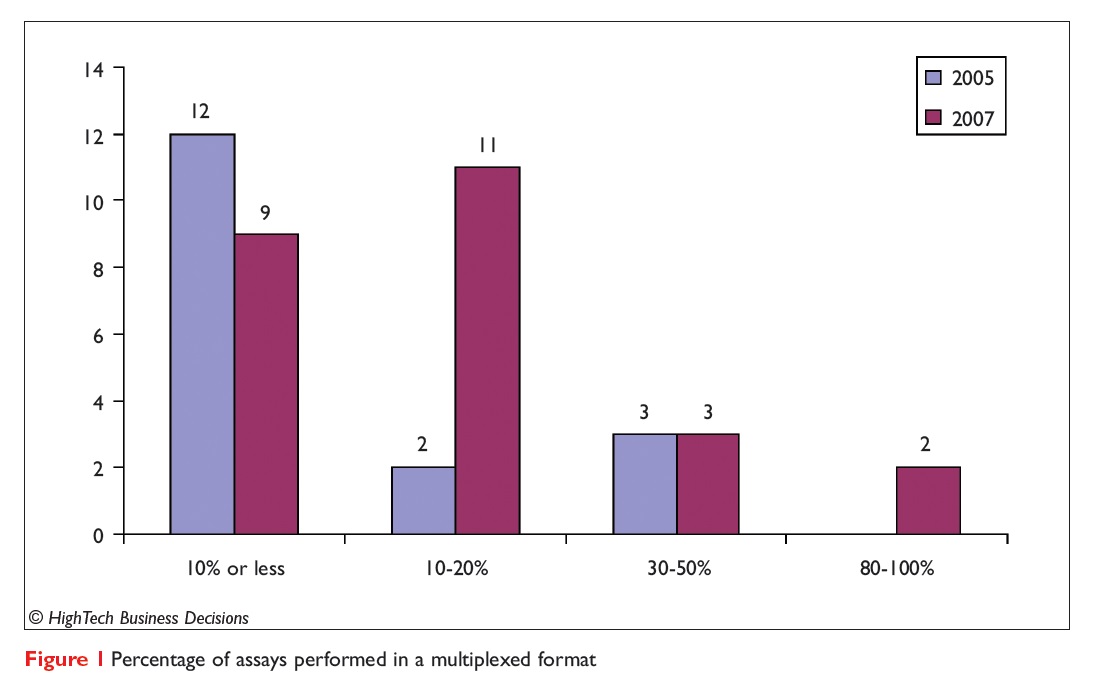 The interest in multiplexing is due to its potential to provide a better understanding of a pathway as a whole. A comment from one of the HTS lab directors in the study summarised the situation well: “We would like to use a mix of purified enzymes so we control the entire reaction. It would be great if we could make a sensitive measurement of our targets in extracts of patient samples. If we could look at which compounds do what and take several measurements per sample, then we might get a more biologically relevant readout.”

HTS labs indicate they would like to use more multiplexing in the future. They are interested in screening the usual targets, kinases, GPCRs or ion channels, but using a multiplexed approach, for example, assaying multiple kinases to explore compound targeting and selectivity. Assays of multi-step metabolic pathways or cancer-specific multiple events are invaluable for exploring targets in a complex context. The directors also mentioned the importance of using multiplexing to eliminate off-target effects like the species cross-reactivity of a target or cytotoxicity.

Even though multiplexing provides an enriched biological context for the target, these assays can be problematic because of their complexity. Some of the challenges in multiplexing include difficult implementation and optimisation of the assays. More biochemical tools and better signal-to-noise for more robust readouts are among the most mentioned improvements needed for multiplexing. A summarised list of multiplexing improvement needs is shown in Table 1. 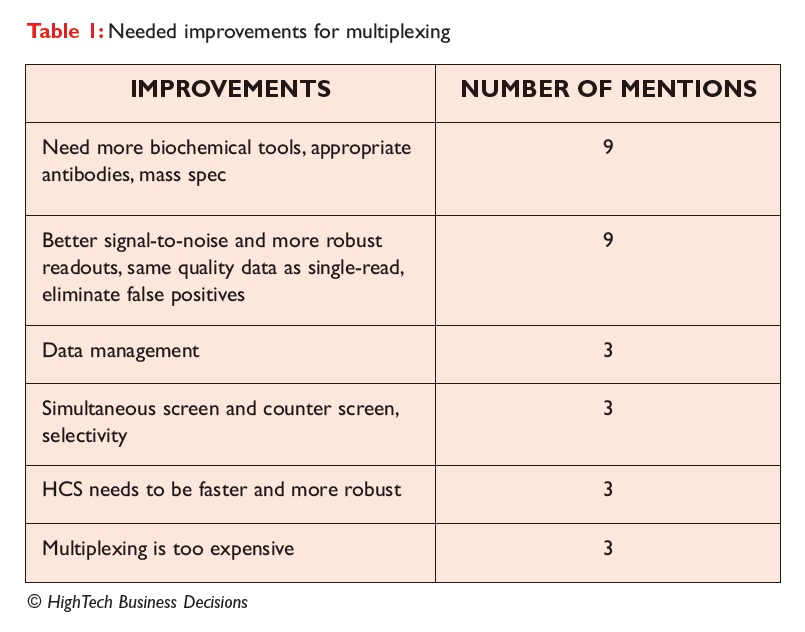 There is a clear interest in multiplexed assays among HTS directors, particularly as enabling technology becomes available to run complex assays. To support this important discovery endeavour and address some of the challenges of working with complex assays, several companies have developed new multiplexing technologies. These technologies include reagents and reporter genes for differentiated detection, optimised assay conditions to speed the uptake of new technology, and sensitive instrumentation for automated screening accompanied by data analysis tools for managing complex readouts.

“Traditionally, no reliable high throughput methods to measure multiple synaptogenetic factors have been available,” said Michael Anhalt, Technical Product Manager at Thermo Scientific. Modulation of neurite and synaptic structures in neurons are closely related to the pathological process of neurological diseases. Mr Anhalt added: “This technology will greatly advance lead identification and validation in the study of neurobiology- based therapeutics. These diseases include: Alzheimer’s, Parkinson’s, autism, schizophrenia, anxiety/depression and addiction.”

In one of the examples, a simultaneous screen and counter screen, the target Nav1.3 is multiplexed with the potentially undesirable target Kv7.1. “Theoretically more ion channel targets, perhaps up to four, could be addressed with a carefully selected voltage protocol and a complementary set of ion channel targets,” added Dr Costantin.

The best benefit to multiplexing using this PPC technology is the cost reduction through resource and time savings. Dr Costantin commented: “Direct electrophysiological (EP) assays for ion channel screens are expensive due to the cost of the substrate required to measure ionic currents in live cells. Direct EP assays are more desirable than fluorescent ion channel assays due to the near complete elimination of false positives and negatives. Direct EP assays have historically been done as a follow-up to a fluorescent (FLIPR) assay due to cost. Only since the introduction of PPC have direct EP screens been attempted in the 10,000 to 100,000 compound library range.

Beckman Coulter (www.beckmancoulter.com) offered its experience and expertise through the custom design of high content, multiplexed assays for drug discovery. “There are commercially available assays out there that give a multiplexed readout, but they are not optimised for a lab or research project and are not always reproducible,” said Cassandra Vaughn, Global Strategic Market Manager for Flow Cytometry at Beckman Coulter. “Because of the biological complexity of these assays more and more clients are coming to us for help optimising high content screens.”

“Our group is able to truly customise the assays so that they are standardised, automated and reproducible,” explained Dr Wade E. Bolton, Vice President of Custom Biopharma Solutions at Beckman Coulter. “Standardisation is Beckman Coulter’s strength. It comes from our diagnostics development where everything is optimised, validated, with well-written instructions that must meet strict FDA standards.

We have worked with these assays for a long time so we have the experience to know which reagents will interfere and which will work together. Of course we always have to validate the assays to show there is no cross-talk, but that is what we do; we are a process driven company.”

Dr Bolton added: “In addition, there are great economies of scale in multiplexing with 10 or more answers at the same time from one assay. For example, improved optics have led to better discernment of size, where we used to be able to detect two to five different bead sizes, now we can detect 50-100 differently sized antibody-tagged beads, and processing improvements allow us to detect 80,000 events per second. This is invaluable in areas where there is a huge amount of time-sensitive testing to be done, like vaccine testing.” 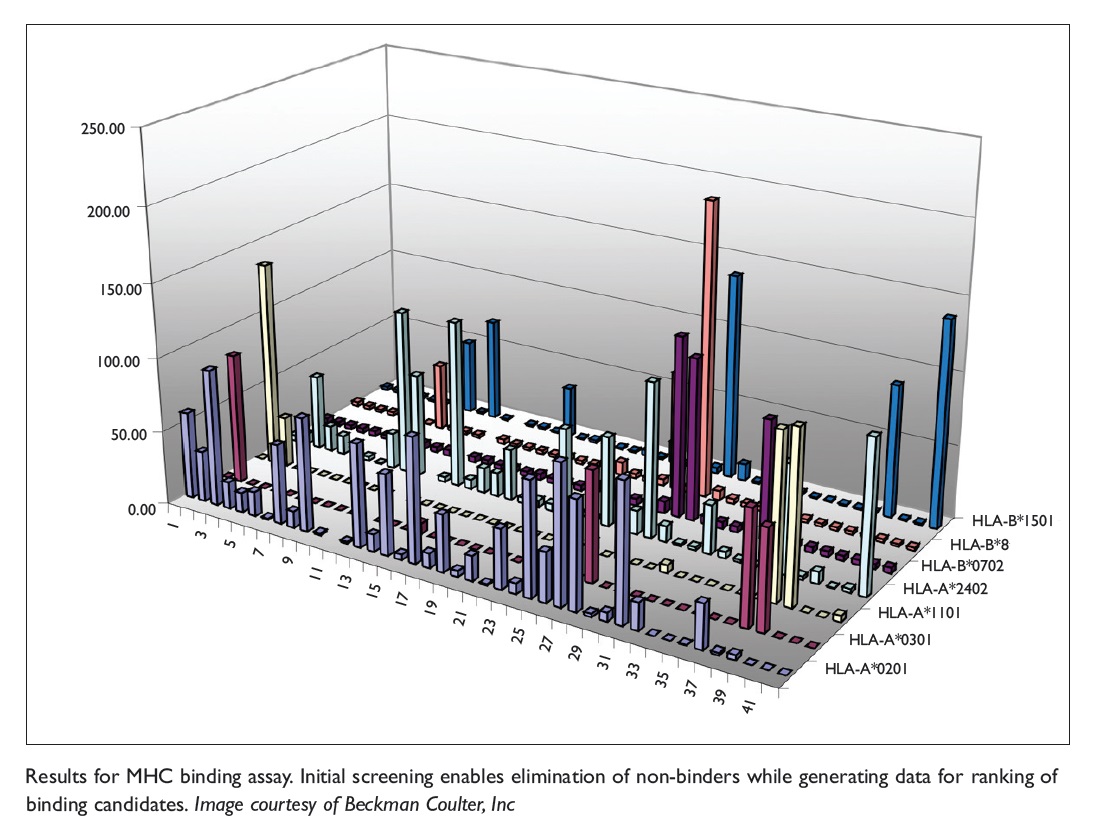 Promega (www.promega.com) has created biochemical tools that offer a differential readout when combined in a high throughput triplex assay. Dr John Watson, Director of Cellular Analysis and Pharma/Biotech at Promega, described the company’s approach: “We have developed the GloMax®- Multi platform into a fully integrated system for multiplexing luminescent and fluorescent assays used in small molecule screening.” The GloMax®- Multi Detection System has independent luminescence, fluorescence and absorbance detection modules, providing light paths and detectors optimised for the best performance of each module.

“Our newest multiplexing technology enables the monitoring of apoptosis, cytotoxicity and viability in a single-well triplex assay. We are also looking to launch ApoLive-Glo® to monitor two of the biomarkers in the same well,” said Dr Watson. 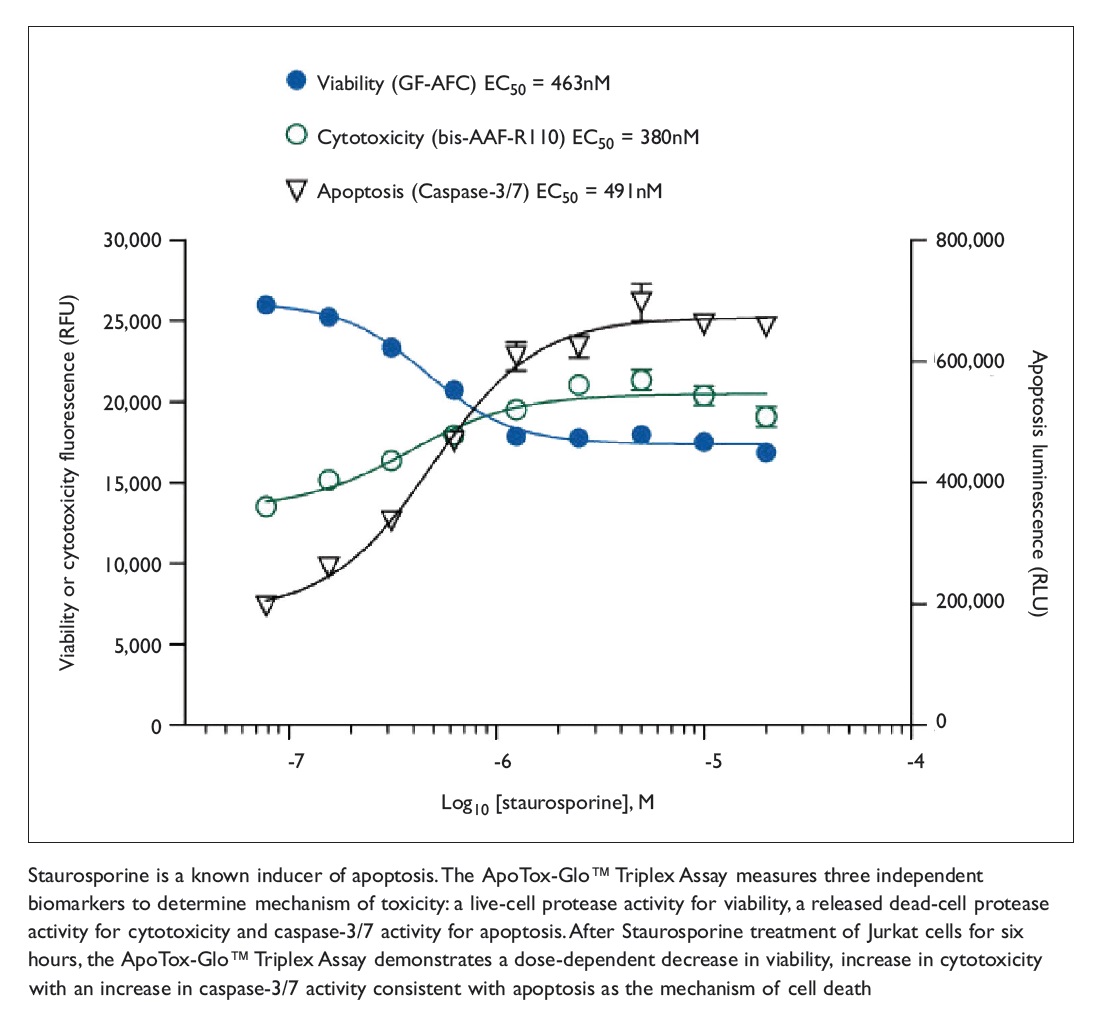 Drug discovery companies have pushed hard in the last decade to screen wide-ranging compound libraries to find useful small molecule drugs. Despite success identifying these candidates, they are too often failing in clinical trials. There is increased recognition that these candidates are failing because of off-target and cytotoxic effects and now high throughput screens are being utilised earlier in drug discovery to eliminate inappropriate candidates.

Dr. Watson commented: “The key impact is to be able to drive better compounds into preclinical drug development by eliminating compounds with off target liabilities. This will speed up the lead validation phase and improve the leads prior to preclinical studies. The ability to get biologically relevant in vitro data has been the key to improved later stage productivity in small molecule drug discovery over the past couple of years.” 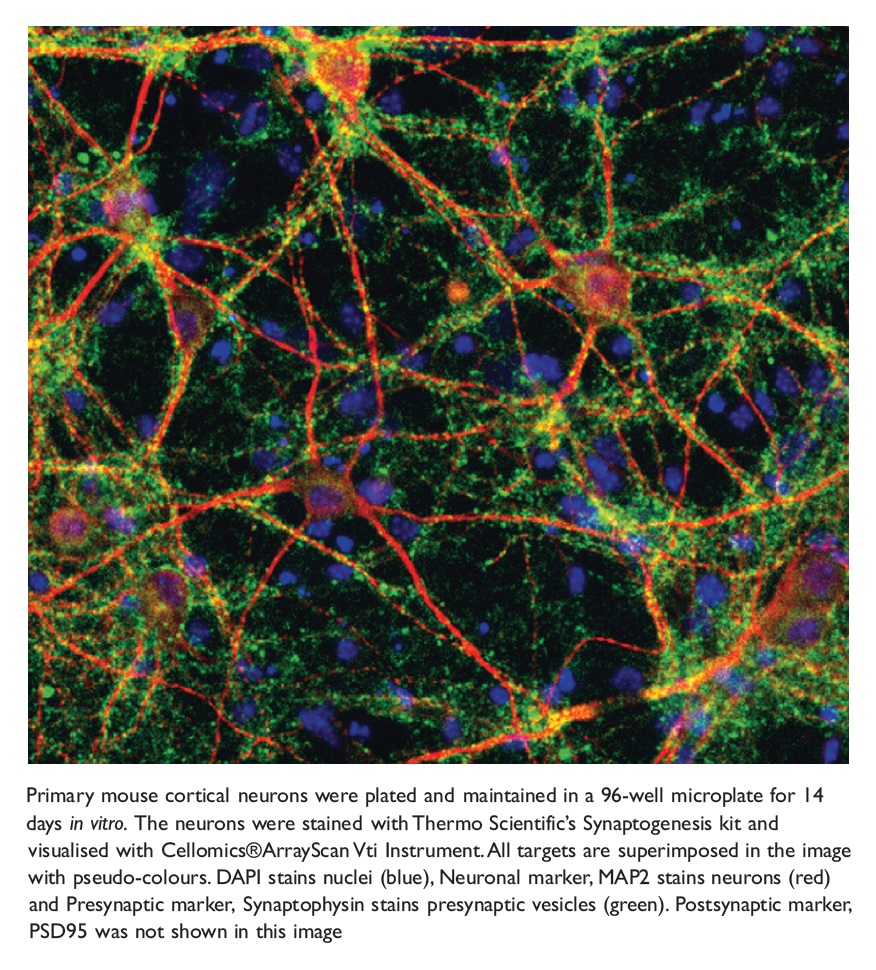 Multiplexing: an opportunity for improved discovery

Multiplexed assays provide a rich context for screening targets. Although these assays are complex, improvements in technology have made multiplexing more accessible to HTS labs.

“I see a change happening in the way drug discovery is being done,” said Dr Bolton. “There is an increase in high content screening which is important because we need to identify valid candidates early, instead of screening fast and dirty and then using a fail fast approach to eliminate candidates. It is better to identify the golden apple right away and move it forward.”

Dr Bolton continued: “Multiplexing is valuable because the more pieces of the puzzle we have in place simultaneously, the better the picture, as well as being able to identify the non-relevant pathways which ultimately leads to better medical efficacy. Assays can simultaneously look at a target, downstream events and parallel pathways. Screening this way can knock out ineffective or toxic compounds early on, decreasing later stage failures,” Dr Bolton concluded.

“Multiplexing itself is the key to generating more biologically relevant in vitro data,” said Dr Watson. “Because multiple biomarkers are being monitored in a single well, technical issues with things like the edge effect are controlled for. Plotting the data as a ratio of two analytes such as an apoptosis biomarker and a cytotoxicity indicator can reduce the coefficient of variability by up to three-fold. It also provides more information from a single well such as the potential mechanisms of toxicity.” DDW

This article originally featured in the DDW Fall 2009 Issue

Mr William P. Downey is president of HighTech Business Decisions, a consulting company specialising in market research for biotechnology and pharmaceutical manufacturing. Mr Downey has held positions in marketing, strategy and finance for private and public companies. He has an MBA from Washington University and a BA from the University of Michigan.