Monoclonal Antibodies – Magic bullets or a shot in the dark 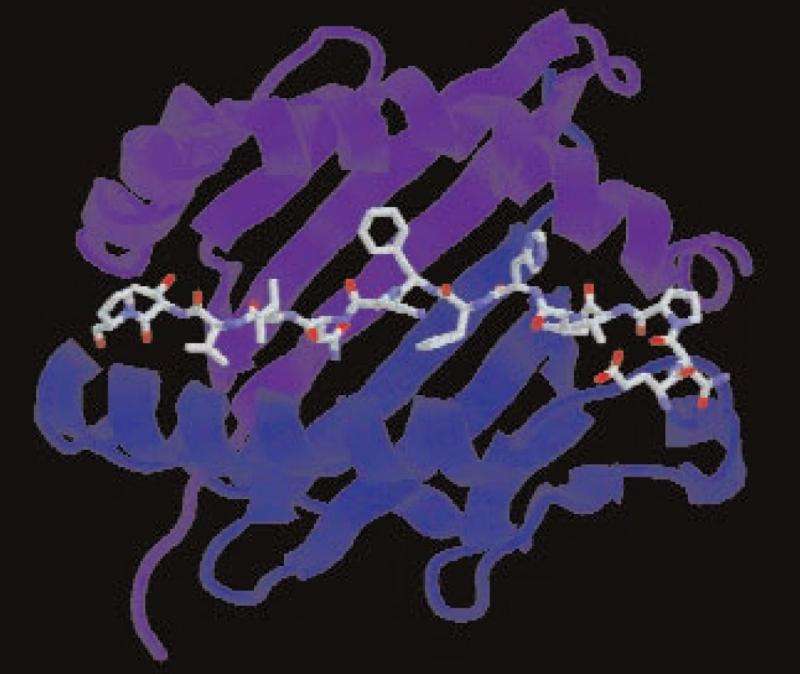 Monoclonal Antibodies – Magic bullets or a shot in the dark

Antibodies are a natural part of the human immune system, capable of selectively binding with high affinity to antigens, mediating rapid neutralisation and clearance from the circulation. These two key properties of antibodies: their exquisite binding specificity and high affinity for the target antigen, have rendered them supremely attractive as therapeutics (Figure 1). 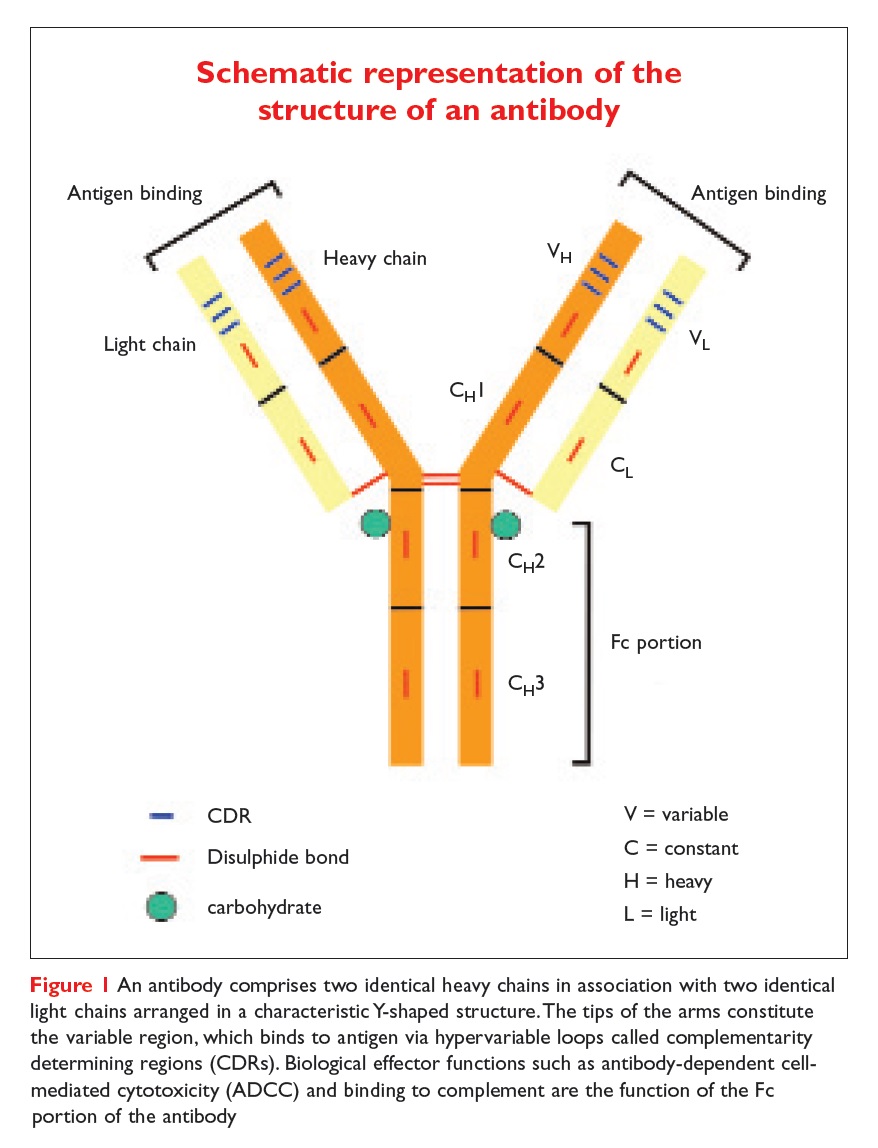 When Kohler and Milstein demonstrated that antibodies could be cloned from mice immunised with the antigen of interest, expectations for the potential of monoclonal antibodies as therapeutics soared (Figure 2). 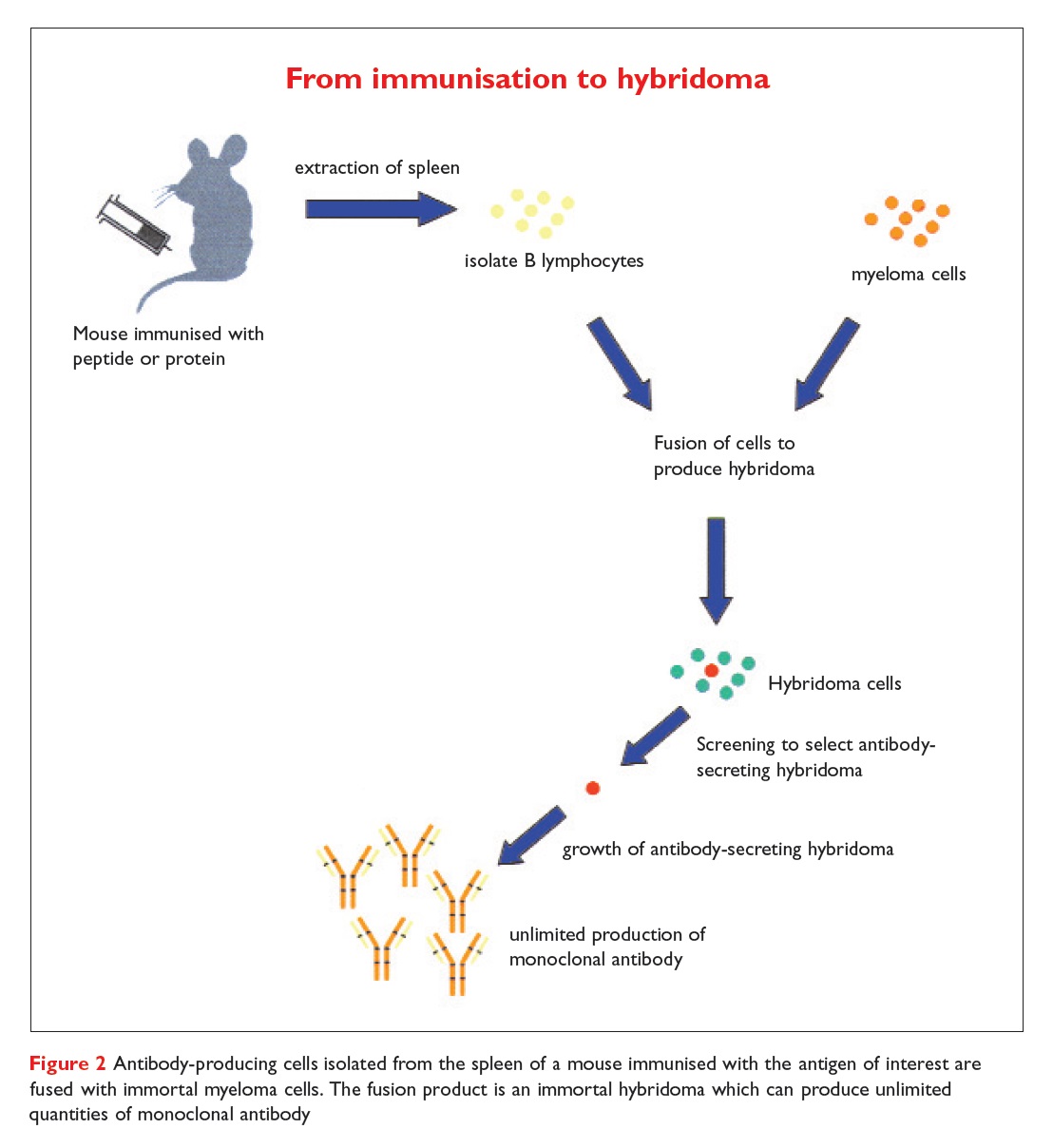 While there were many factors that contributed to these early clinical failures, one which stands out is immunogenicity. Antibodies were typically of murine origin and when these antibodies were administered to patients, they rapidly elicited an immune response, often causing adverse reactions, ranging from mild allergies to extreme and often fatal anaphylactic shock. Serum sickness could result from the formation of antibody complexes and local injection site reactions were common.

The therapeutic effect of the monoclonal antibody could be eliminated, because anti-idiotype antibodies generated bound to and neutralised the therapeutic antibody, thus promoting its rapid clearance from the circulation and precluding re-administration.

From mouse to man: reducing immunogenicity

Numerous techniques have been employed to reduce/eliminate the immunogenicity of murine antibodies and, in the main, these approaches have sought to maximise the amount of human sequence. Initially, the similarities in sequence and structure between murine and human antibodies were exploited to generate chimaeric (Figure 3b) and later, humanised antibodies (Figure 3c). 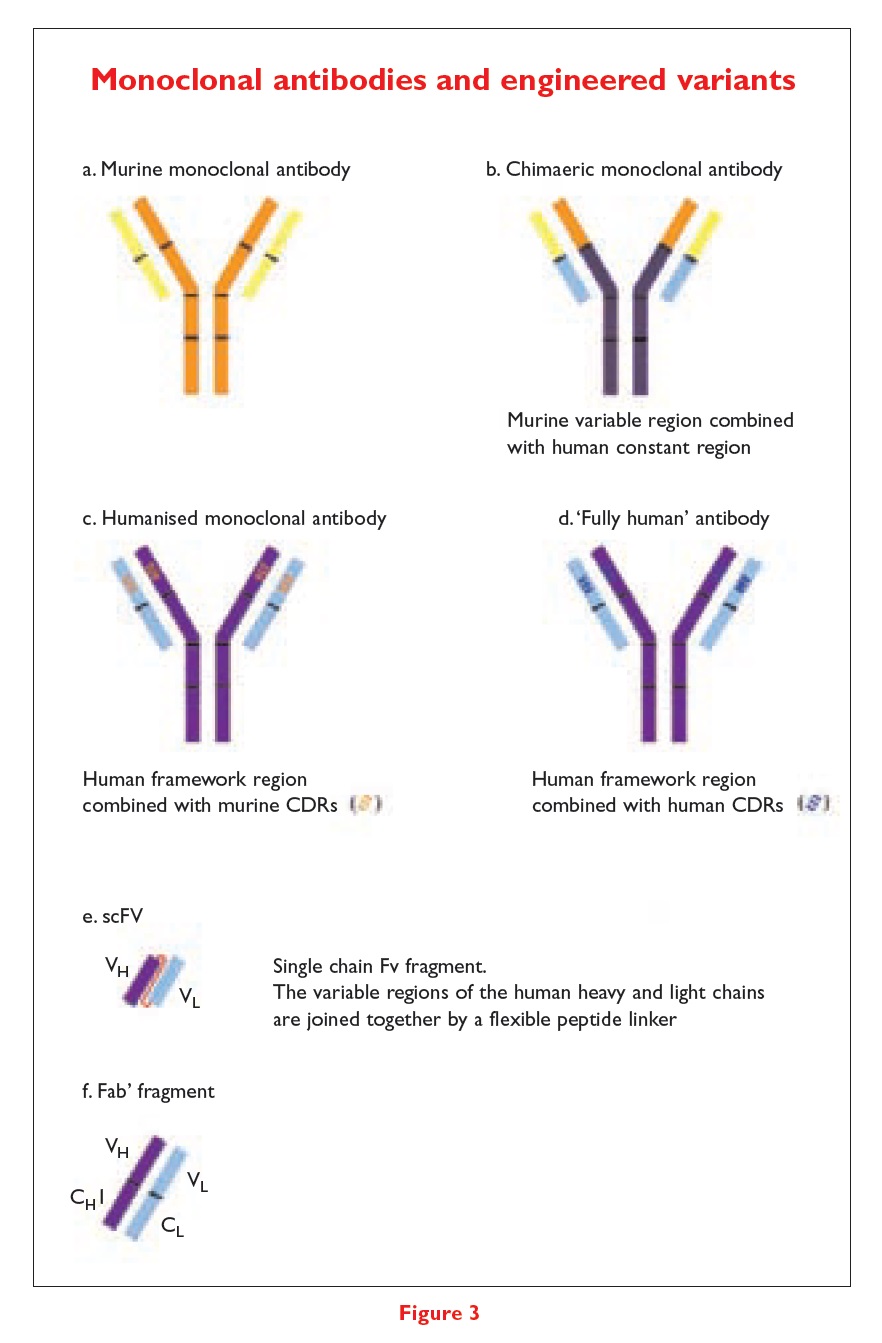 Humanisation involves the transfer of the CDRs (complementarity determining regions) which are primarily responsible for the unique characteristics of an antibody, into a human framework. Thus antibodies were generated in which only the CDRs were of mouse origin.

There are a number of commercially successful chimaeric and humanised antibodies, although some exhibit significant immunogenicity (Table 1).

In an attempt to maximise the ‘human’ content of the antibody still further, a number of techniques were developed to generate ‘fully-human’ antibodies (Figure 3d).

There have been three main approaches to the generation of fully-human antibodies:

However, while each of these approaches may claim to produce antibodies of ‘100% human sequence’, each antibody will have a unique sequence that determines its unique binding characteristics such that that exact sequence may not even be present in any human.

Antibodies in mice and humans are encoded by a range of genes specific for heavy and light variable regions, constant regions and junction regions which join the variable and constant domains. Rearrangement of these genes results in a significant repertoire of germline antibodies. However, such germline antibodies lack specificity and high affinity binding to antigen. High affinity antibodies, specific for a certain antigen are produced naturally in a process known as affinity maturation.

Prolonged exposure of the immune system to antigen results in the somatic mutation of the germline sequence throughout the variable region. Somatically mutated antibodies with antigen specificity are clonally expanded resulting in the expression of high levels of the specific antibody in response to exposure to the target antigen. This process can be reproduced in vivo in the transgenic mice and can also be mimicked in vitro to improve human antibodies.

But does ‘human’ mean non-immunogenic? The answer to that is clearly no. Native human proteins such as insulin, interferon and Factor VIII have been used extensively in patients to treat a range of diseases and the potential of these proteins to induce an immune response is well documented. Even erythropoietin (EPO) has been associated with several cases of immunogenicity leading to red cell aplasia through the destruction of the very cells producing endogenous EPO (Table 2). 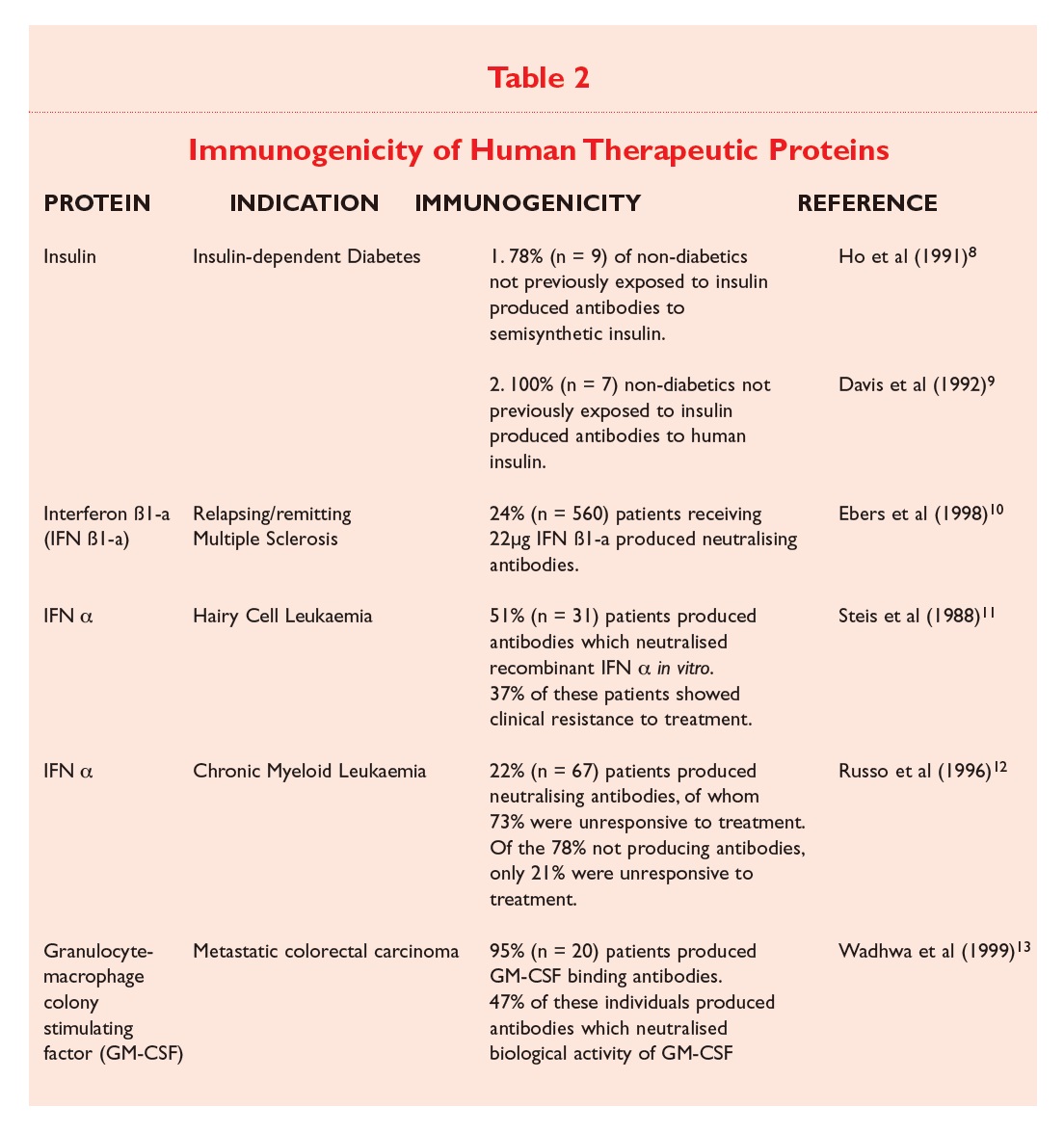 That the human immune system can respond with an immune response to the therapeutic administration of native human proteins which are of identical sequence and structure to those naturally expressed, bodes ill for the naïve assumption that antibodies of ‘human’ origin and inherently unique sequence should be non-immunogenic. As no ‘fully-human’ antibodies are yet approved as therapeutics, there is little available data on their immunogenicity. However, clinical experience with human proteins and the fact that even ‘fully human’ antibodies contain unique sequences suggests that immunogenicity will continue to be an issue for these molecules.

Since the excitement of the eighties, intellectual property in the field of monoclonal antibody technology has been hard fought and complex. Some issued patents dominate certain technologies in the field, such as the humanisation patents held by Protein Design Labs Inc (Queen), the chimeric antibody patents held by Genentech plc (Cabilly) and the antibody expression patents held by Celltech plc (Boss). Phage display is covered by numerous patents and there is ongoing litigation, in particular between Morphosys and CAT, to determine dominance and establish freedom to operate.

However, while there are a number of patents which can be identified as being essential to the generation of therapeutic antibodies, there is a plethora of IP relating to alternatives. For example, a number of companies are exploring the use of alternative binding molecules which aim to mimic the diverse binding characteristics of antibodies. Examples of this include the use of Protein A by Affibody AB and lipocalins by Pieris ProteoLab AG as alternative scaffolds which have been used to generate libraries of binding molecules.

PEGylation is method which has attempted to eliminate immunogenicity in therapeutic proteins by the covalently attachment of polyethylene glycol (PEG). PEG is a neutral, water-soluble non-toxic polymer which can attached at specific residues in protein sequences. In aqueous solution, the PEG molecule becomes heavily hydrated and is a dynamic structure which sweeps out its exclusion volume, thus resisting the approach of other molecules. PEGylated proteins exhibit an increase in half-life and reduced toxicity which contribute to improved efficacy.

Enzon Inc has shown that PEG-Intron A (PEGylated IFNα) can be administered weekly instead of the three-times weekly doses of the non-PEGylated form normally used. It has also been suggested that PEGylation can reduce immunogenicity by inhibiting antibody binding and uptake by antigen presenting cells. However, PEGylated Thrombopoietin (TPO) has been found to induce the production of neutralising antibodies in some patients and this has led to the discontinuation of clinical trials involving PEGylated-TPO in the US (1).

Veneering is an approach which has been developed to remove B cell epitopes specifically from antibodies ie those regions on the surface of the molecule which may stimulate an anti-antibody response. While comprehensive removal of B cell epitopes should theoretically eliminate immunogenicity, in practise it is almost impossible to exhaustively identify all potential B cell epitopes.

The method of Padlan (2) works on the principle that residues exposed on the antibody surface are most likely to be antigenic and so the exposed murine residues in the framework regions of antibodies are replaced with those commonly found in a human homologue. Thus, in effect, this approach continues the theme of maximising human sequence to reduce immunogenicity.

Of the methods discussed so far, only veneering looks at the theoretical elimination of immunogenicity by eliminating epitopes. Another analogous approach is the removal of T cell epitopes to eliminate immunogenicity.

In a normal immune response, a therapeutic antibody or protein can be taken up by an antigen presenting cell (APC) and proteolytically digested to generate peptide fragments. Some of the peptides can bind to major histocompatibility complex (MHC) class II molecules and, in this form, can be presented on the surface of the APC where they can be recognised by naïve T cells. Those peptides which are recognised by the T cell receptor (TCR) when bound to MHC class II resulting in prolifer-ation of T cells are referred to as ‘helper T cell epitopes’.

Activation of helper T cells leads to the secretion of cytokines and the differentiation of B cells to antibody producing plasma cells. With most protein antigens, such helper T cell epitopes are essential to the stimulation of a mature antibody response (Figure 4). Removal of these epitopes from a therapeutic antibody or protein can therefore eliminate immunogenicity. 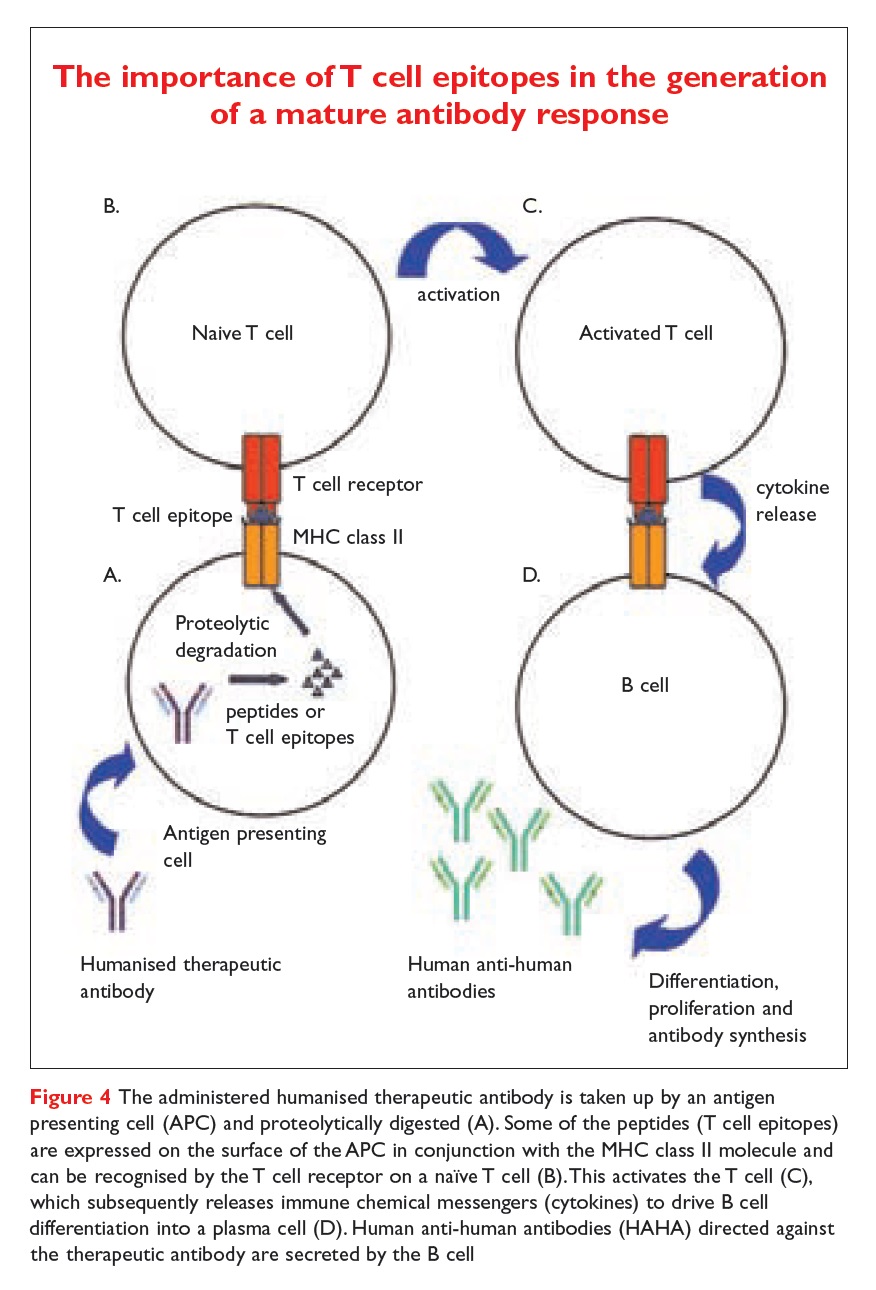 In order for helper T cell epitopes to be removed, they must first be identified. This is potentially a huge task as the T cell receptor can recognise an inestimable number of peptides. One approach is to identify the peptides which can bind to MHC class II as this is a pre-requisite for recognition by the TCR. A number of in silico methods have been developed to identify those peptides within a protein sequence which can bind MHC class II and include the use of binding motifs, side-chain scanning, artificial neural networks and molecular modelling. However, only a small proportion of those peptides which bind MHC class II will be recognised by T cells and stimulate proliferation.

The diversity of TCR structures and a lack of detailed knowledge on peptide recognition by the TCR currently render a molecular modelling approach to identify those peptides which can be recognised by T cells unfeasible. However, in vitro human T cell assays can be used to empirically identify peptides which can stimulate T cell proliferation.

Biovation has developed an approach to identify and remove T cell epitopes within antibodies and proteins. DeImmunisationTM, combines the in silico prediction of peptides which can bind MHC class II (Figure 5) using proprietary software called Peptide Threading, with T cell assays to identify peptides which can stimulate human T cell proliferation. Peptides which can stimulate T cell proliferation can then be modified, usually by single amino acid substitutions to prevent binding to MHC class II and therefore eliminate immunogenicity. Currently an antibody modified by DeImmunisationTM is in phase I/II clinical trials and has shown no immunogenicity (3). 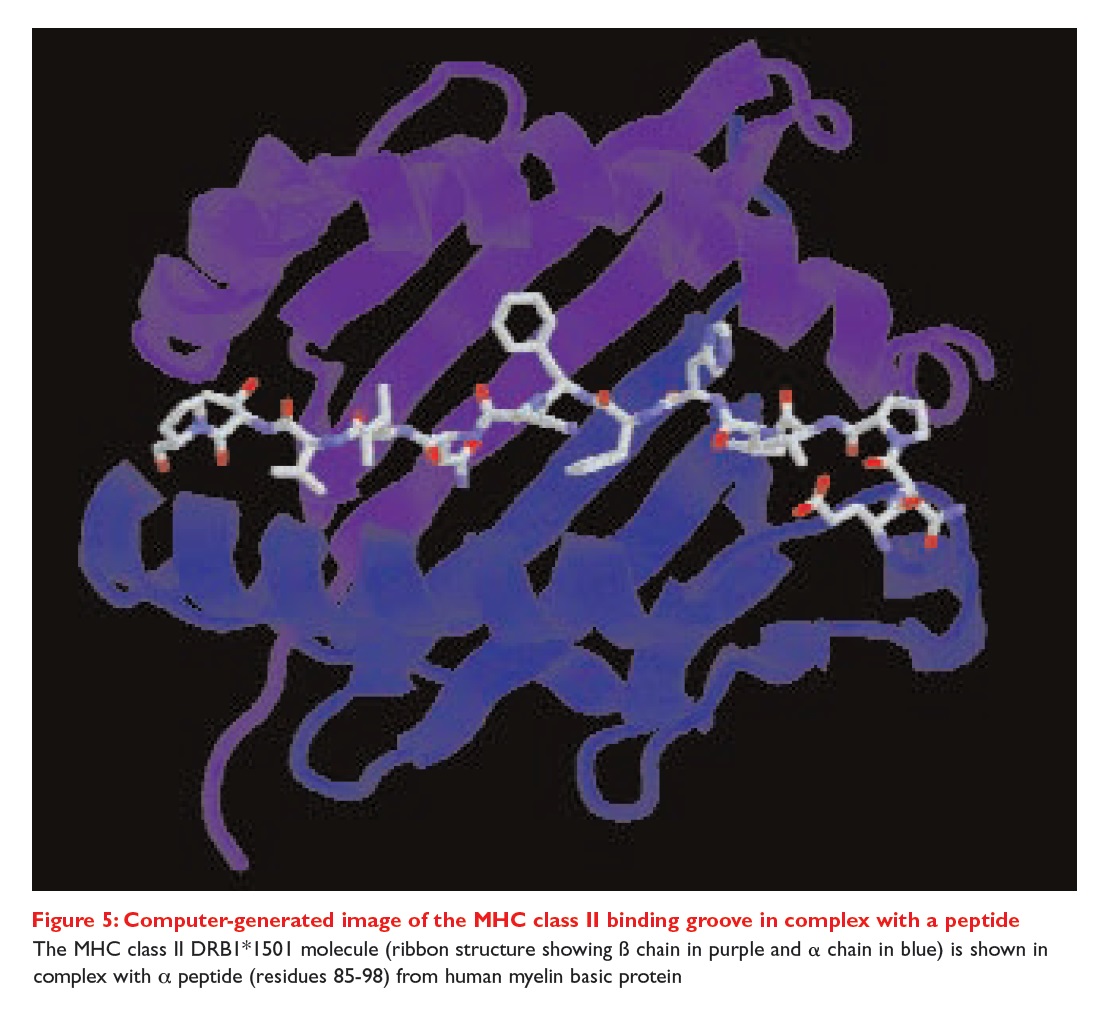 While a combination of B and T cell epitopes are required for an immune response to develop, other factors will also influence immunogenicity. For example, a patient whose immune system is compromised either through co-therapy (eg co-administration of methotrexate with many treatments for rheumatoid arthritis) or disease state (eg chronic lymphocytic leukaemia) is less likely to mount an immune response.

The costs of immunogenicity can be far-reaching. In extreme circumstances, the immune response to an initial dose of therapeutic antibody or protein can result in a response so severe that re-administration is precluded. Failure of this kind for a drug during clinical trials can be catastrophic in terms of time and cost.

Once tolerance is achieved it is usually lifelong but this is obviously an expensive way of reducing the incidence of immunogenicity. The cost of employing factor VIII to induce tolerance in a five-year-old haemophiliac is estimated at $1 million (4). However, there are emotional as well as financial costs, as prolonged treatment of this nature is potentially very distressing to a child.

Monoclonal antibodies are enjoying a resurgence as therapeutics and are likely to continue to be developed for diverse indications. In particular, studies on the chronic use of monoclonal antibodies for non-life threatening diseases are on the rise. Competition is high for the billion dollar markets such as rheumatoid arthritis where there are at least 10 antibodies currently in various stages of development.

Not only will these antibodies compete in terms of efficacy but also in safety, tolerability and ease of patient compliance. A nonimmunogenic antibody which can be administered subcutaneously every two or three weeks with no injection site reaction or allergic reaction is likely to dominate over one where immunogenicity dictates IV administration on a weekly basis.

We have come a long way from the first murine therapeutic antibodies but there are still issues of immunogenicity which need to be addressed before antibodies really achieve their full potential.

Dr Fiona Adair is currently Director of Business Development for Biovation Ltd, a company she joined in 1996 as Research Manager having come from an academic research background. Dr Adair has been responsible for establishing many new business relationships with biotechnology and pharmaceutical companies around the worldwide.

2 Padlan, EA (1991). A possible procedure for reducing the immunogenicity of antibody variable domains while preserving their ligand-binding properties. Molecular Immunology 28 (4/5) 489-498.