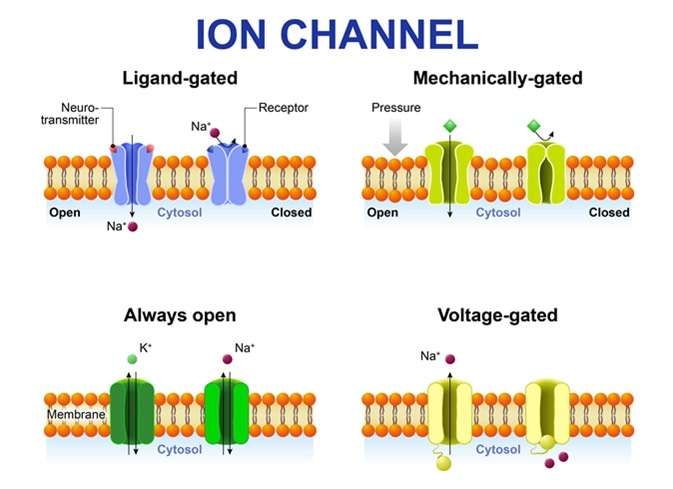 Competition in the pharmaceutical industry requires a reduction in research and development project cycle times and, accordingly, an increase in productivity and efficiency.

Pharmaceutical companies also are faced with the challenge of translating massive amounts of new genomic data into innovative drugs. More than a thousand possible new drug targets have emerged from sequencing the human genome, but currently available drugs only target approximately 500 different proteins (1). 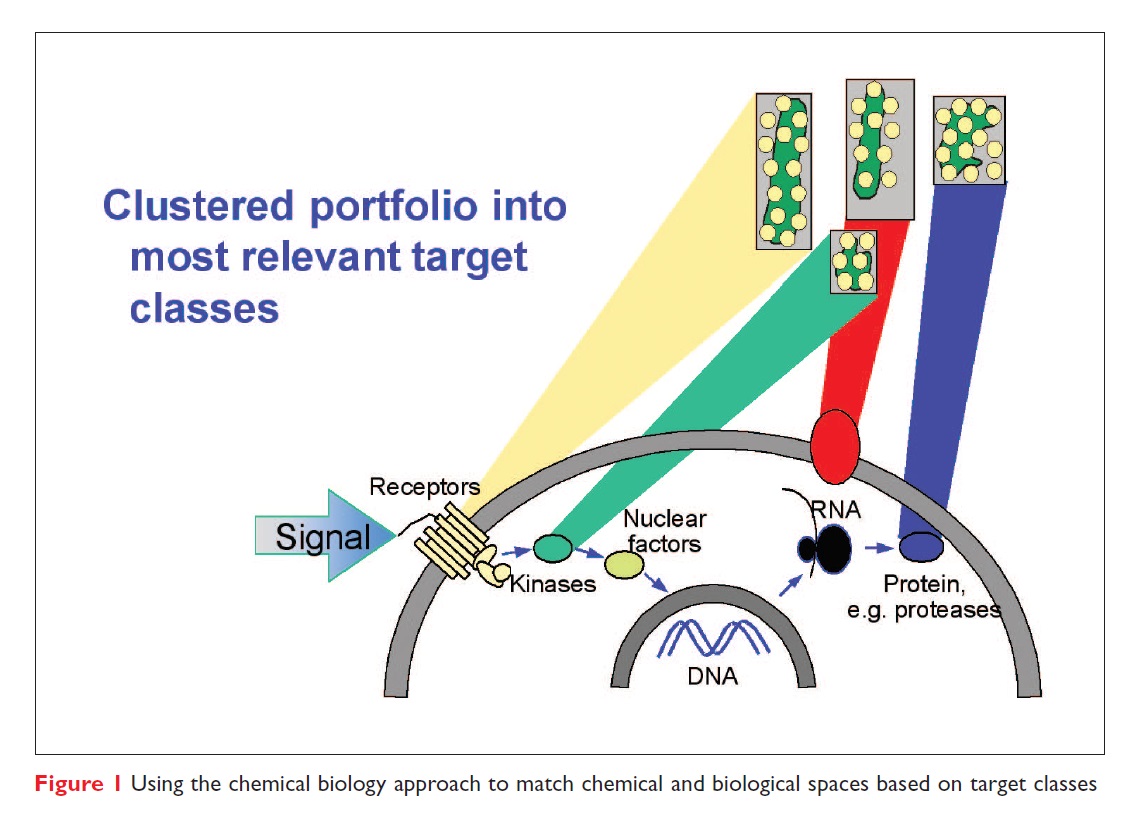 This article highlights methods towards such an ion channel target family approach to lead generation in atrial fibrillation.

Lack of interest is not what has hindered the development of drugs targeting ion channels since many ‘channelopathies’ such as cystic fibrosis, diabetes, heart disease, deafness, blindness and epilepsy can all result from malfunctions in ion channels. Ion channels, which are ubiquitous, often tissue specific and sensitive to pharmaceuticals, also make excellent targets because the proteins protrude out in the membrane exposed to the extracellular space.

Figure 2 gives an example of the heterogeneous ion channel targets involved in many disease states. 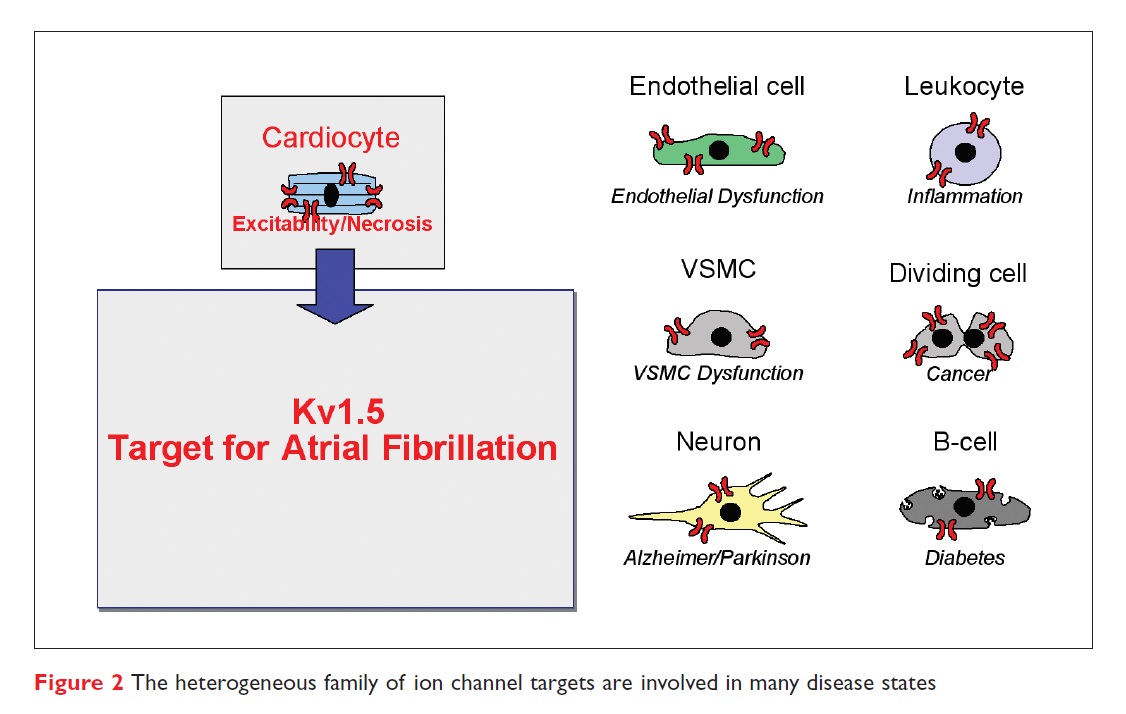 In the post-genomic era, progress in transcription profiling revealing the tissue specific distributions of ion channels and a greater understanding of these proteins means that ion channels will play an increasingly important role as therapeutic drug targets in the future. These advances, combined with improved cell-based assays, will make ion channels a favourable class of selective, tissue specific, drug targets.

Despite their remarkable physiological value, ion channels have remained a relatively unexploited therapeutic target class, especially in comparison to target areas such as G-protein coupled receptors or kinases. Major challenges have been the lack of high throughput screening assays to test several hundred thousand compounds against a particular ion channel and the availability of targeted libraries of candidate ion channel modulators2. Therefore, a biased ion channel library is of high interest for lead finding in the field.

Molecular informatics is involved in several areas of the value chain of drug discovery, mainly in lead finding and lead optimisation through appropriate techniques, such as high throughput screening data analysis, database mining and pharmacophore modelling (3). The ion channel target family-related approach at Aventis consists of biased libraries, which were built by matching chemical and biological space.

Therefore, the intersection of biological structures and functionalities with chemical structures and properties is derived to perform a knowledge-driven biased library design. This allows an extraction of common structural features for target families out of an essentially infinite chemical space. Thereby, chemical libraries could be built and enriched by preferred features of biologically active compounds.

In addition, the molecular compositions and the functions of many important channels are being elucidated. Currently, there are active pharmaceutical research and development programmes involving ion channels in a number of areas, including asthma, inflammation, arrhythmia and CNS disorders. This field represents a major growth area with the emergence of, for example, the Kv1.5 channel as a target for atrial fibrillation.

Blocking the Kv1.5/Kv4.3 channels for the treatment of atrial fibrillation

Atrial arrhythmias are a common cardiovascular problem. Despite several anti-arrhythmic drugs being available commercially, a medical need for safer and more efficient anti-arrhythmic treatment remains. Atrial selective compounds that terminate or prevent atrial arrhythmias while not prolonging the QTc-time would be of high value and potentially commercially successful.

In this context, Aventis has leveraged our ion channel platform to generate and investigate leads for a promising ion channel target. Figure 3 illustrates the steps Aventis has taken in translating target class expertise into potentially specific and safe compounds for atrial fibrillation. 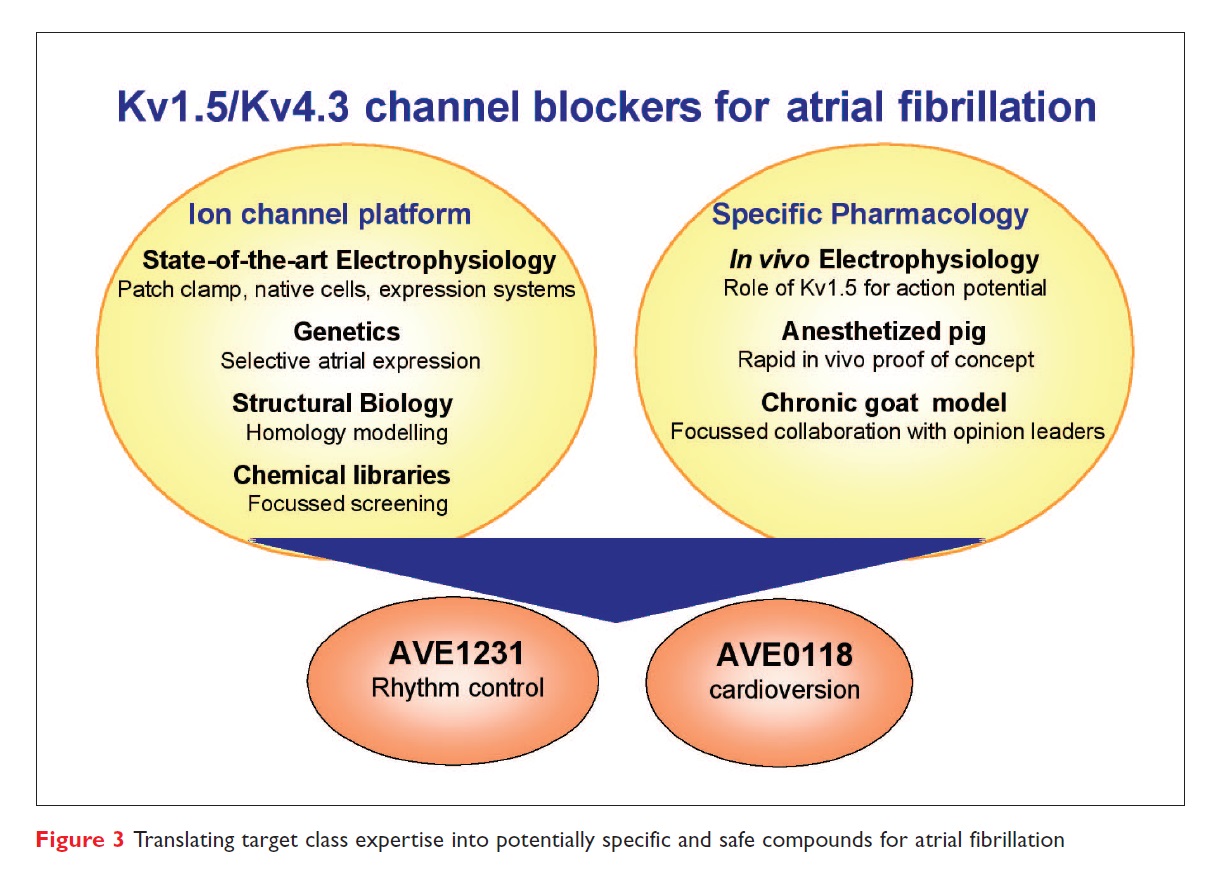 The atrial voltage-gated potassium channels Kv1.5 and Kv4.3 are regarded as promising targets, which should not be associated with ventricular side-effects unlike classical antiarrhythmics. Our ion channel platform has aided the development of the drug candidates AVE0118 and AVE1231, two Kv1.5 and Kv4.3 blockers demonstrating efficacy in several atrial fibrillation animal models with no pro-arrhythmic effects4.

The chemistry, selectivity and structure-activity data disclosed in the literature demonstrate the anti-arrhythmic efficacy of Kv1.5/Kv4.3 blockers in vivo. Several studies in pig, dog or goat models have confirmed their proposed atrial selective anti-arrhythmic effect in vivo. AVE0118 prolongs atrial refractoriness without any effect on the QTinterval. Most of the more intensively characterised Kv1.5 blockers have turned out not to be selective but also block other ion channels.

Based on the currently available data it seems that additional inhibition of Kv4.3 and KACh is beneficial for the desired anti-arrhythmic effect without hampering the ventricular safety of a Kv1.5 blocker. Figure 4 shows the effects of AVE0118 on whole-cell currents in pig atrial myocytes. 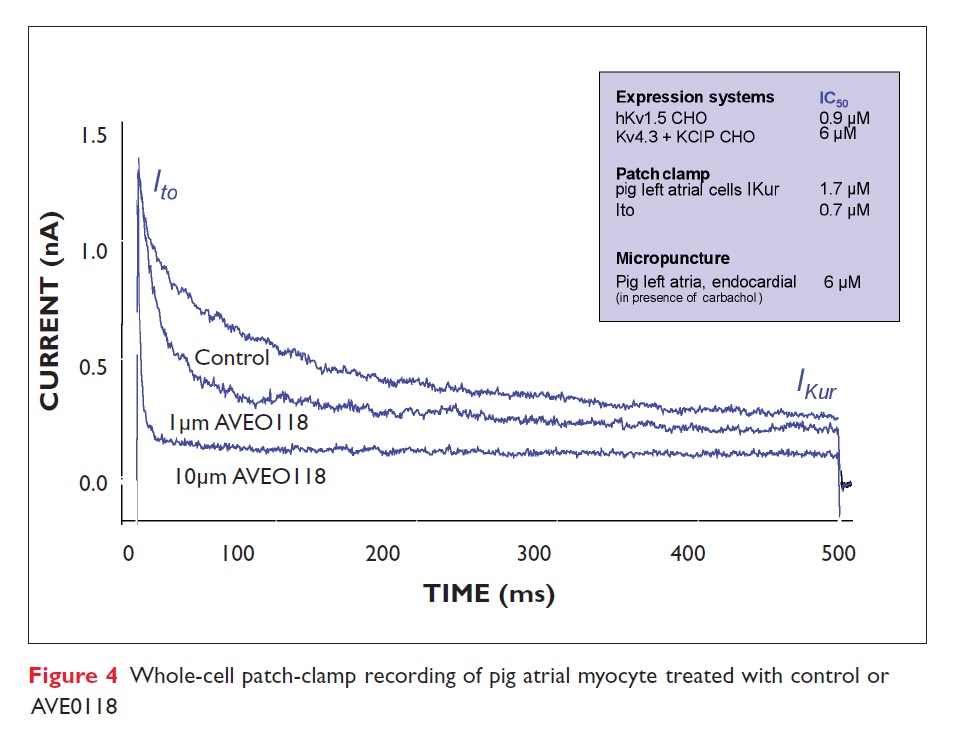 At Aventis, knowledge-based lead finding is being achieved by matching chemical and biological space through the collection of target family-related ligands and the identification of privileged structural motifs to build target family biased libraries for focused screening to find better hits faster. Ion channels occur as large families of related genes with cell-specific expression patterns. Ion channels have been an untapped resource because of the difficulty in studying and screening these targets. However, this may change as advances have been made over the past decade in automating relatively high-throughput screening technologies for ion channels.

Progress in transcription profiling, which is revealing the tissue-specific distributions of ion channels and a greater understanding of these proteins, means that ion channels will play an increasingly important role as therapeutic targets. These advances, combined with improved cell-based assays, will make ion channels a favourable class of selective, tissue-specific targets.

Acknowledgement
The editorial assistance of Keith Lantz was invaluable for the preparation of this article.

Publisher’s note
This article was written prior to the Sanofi-Aventis merger and therefore the views expressed by the author may not reflect the future strategy of the new organisation.

This article originally featured in the DDW Winter 2004 Issue

Professor Andreas Busch is presently Global Head of the Therapeutic Department Cardiovascular Diseases at Sanofi-Aventis. An internationally recognised scientist in the field of pharmacology and physiology, with more than 100 publications in peer-reviewed international journals, he is Expert Pharmacologist of the German Society for Pharmacology and Toxicology and Extraordinary Professor of Pharmacology at the University of Frankfurt. Along with these academic distinctions, Professor Busch has also gained great consideration from his peers from industry, with important achievements in strategy development and implementation, restructuring and productivity increase. As Head of Cardiovascular Research, he holds the responsibility for the overall portfolio from target identification to the identification of developmental candidates.