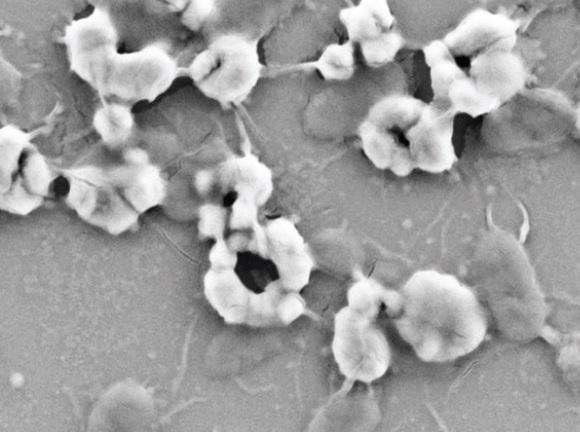 To help combat decades of stagnation in antibiotic development, a team led by the National Physical Laboratory conducted two studies into the antimicrobial peptides that fight infection in our bodies and the feasibility of using them as the basis for new antibiotic treatment which is less prone to bacterial resistance.

For the last 75 years, we have relied heavily on antibiotics to cure everything from acne to pneumonia. They are effective, cheap and readily available, and have almost ruled out deaths from minor infections. But these pillars of medical treatment have been losing their effectiveness at an alarming rate, in some cases leaving even commonplace infections untreatable.

So-called superbugs such as MRSA (methicillin-resistant Staphylococcus aureus) have developed complete resistance to certain strains of antibiotics, and are therefore extremely difficult and expensive to treat. It is true that, without effective antibiotics, everyday medical procedures could become lifethreatening. People could die from tonsillitis and major procedures such as organ transplants or chemotherapy would become impossible to carry out due to extremely high risks of infection.

It is not just everyday infections that could be left untreatable. The impact of infectious diseases could become much worse without antibiotics too. The World Health Organization claims that resistance to earlier generation antimalarial medicines such as chloroquine and sulfadoxine-pyrimethamine is already widespread in most malaria-endemic countries, leaving further gaps in our defences against one of the world’s biggest killers (1).

Research efforts are dwindling too. In 1990, there were almost 20 active antibiotic R&D programmes, now there are only two – run by GlaxoSmithKline and AstraZeneca (2). It is three decades since linezolid, the last new antibiotic class, was discovered (3). This is for a number of reasons.

Firstly, we have exhausted the everyday natural sources of antibiotic discovery, like the penicillin mould. It will be much more complex and costly to develop new treatments. Secondly, many companies are now seeing their licences for antibiotics expire, meaning that the manufacture of these drugs ceases to be profitable. Finally, there is a lack of incentive for the development of antibiotics when compared to other drugs.

Alternatives are only used as a last resort – to prevent bacteria developing resistance to them and therefore do not receive the same demand. Antibiotics in general are not particularly profitable as they are only ever required short term, as opposed to long-term courses of diabetes or heart failure medicine. Subsequently, despite their significant importance for public health, antibiotics are not seen as a lucrative business.

Professor Dame Sally Davies, England’s Chief Medical Officer, declared antimicrobial resistance or AMR a national health crisis in her annual report this year. She argued that Britain’s health system is at risk of regressing several hundred years if antibiotic resistance is not immediately tackled (4). It is clear that developments in this field are urgently needed.

While antibiotics are becoming less effective with time, the body’s natural mechanisms to fight infection have been barely altered by time and evolution. Inside us all are short protein fragments, known as antimicrobial peptides, that have been fighting bacteria in our bodies for thousands of years, without bacteria developing resistance to them.

These naturally occurring peptides are wellrecognised as being very efficient at destroying bacteria, by disrupting the membrane structure of bacterial cells to prevent infection and could provide an answer to a new antibiotic treatment, less prone to antimicrobial resistance (AMR). However, in order to assess their feasibility for this, and before working to develop new treatments and delivery systems, we first need to understand in detail how they work (Figure 1). 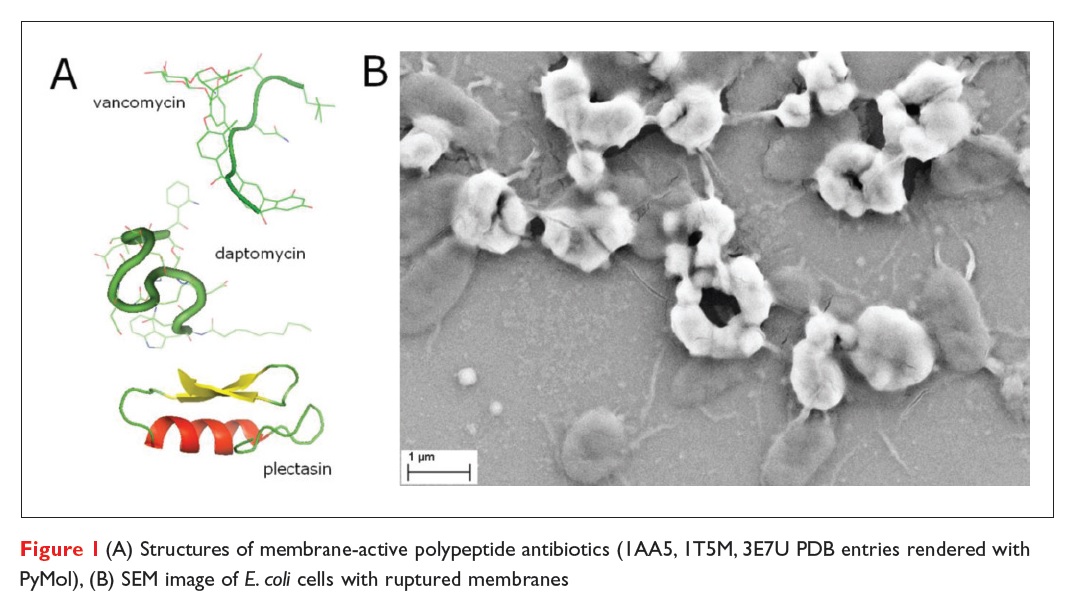 A team, led by the National Physical Laboratory and featuring scientists from the London Centre for Nanotechnology, UCL, University of Edinburgh, University of Oxford, Freie Universität Berlin and IBM, sought to uncover the process by which antimicrobial peptides destroy bacterial cells. Researchers used different tools and techniques, a combination never used for this application before, to look into this process in an unprecedented level of detail.

Specifically, this study combined rational peptide design with topographical (atomic force microscopy) and chemical (nanoscale secondary ion mass spectrometry) imaging on the same samples, to investigate the destruction of bacteria on a molecular level. As reported in the Proceedings of the National Academy of Sciences of the USA (5), it found that antimicrobial peptides porate bacterial membranes starting with tiny pores of only a few nanometres across, which subsequently expand laterally at the nano-to-micrometer scale until the membrane completely disintegrates.

Current antibiotic treatments interfere with the construction of bacterial cell walls, inhibit protein biosynthesis or interfere with cell division. To develop resistance to such treatments requires relatively minor genetic mutations which bacteria can afford and readily develop. In contrast, making resistant membranes is a formidable task for bacteria as it requires the rebuilding of their entire genetic apparatus – an extremely high price to pay. Therefore, it is the membrane of a bacterial cell which remains its Achilles’ heel.

For this reason, antimicrobial peptides that principally target and destroy bacterial membranes make bacteria less likely to become resistant. However, exact mechanisms by which antimicrobial peptides disintegrate bacterial cells are a matter of continuous debates. In their natural environments, the peptides respond to microbial invasions within seconds by binding to microbial membranes. The same time scales apply to their functional stability; the peptides undergo enzymatic degradation shortly after being released by cells.

Based on this rationale, the peptides are meant to kill bacterial cells, but kill quickly. For the same reason, the pores formed need not expand significantly to cause microbial cell death. Even small pores are sufficient to let peptides in bacteria and lyse the cell from within as well as continue membrane disintegration. This process is dynamic, complex and extremely difficult to follow in live cells. To capture poration experimentally, a model system is required. With this in mind, the team set out to make direct observations of the process, avoiding the difficulties of live cell studies.

The scientists first constructed an experimental model which allowed visual monitoring of pore formation. The model comprises supported lipid bilayers that mimic the composition and dynamics of bacterial membranes and an archetypal antimicrobial peptide sequence designed to insert into these bilayers. The sequence was designed using structure-activity relationships characteristic of a large antimicrobial class of helical peptides. The design was a deliberate construction of a contiguous helix capable of inserting into the lipid membranes in a transmembrane manner or perpendicular to the membrane surface.

Thus, following incubation with the peptide the supported lipid bilayers were imaged using atomic force microscopy to reveal physical or topographic changes and features caused by interactions with peptide molecules. The same samples were then analysed using nanoscale secondary-ion mass spectrometry (nanoSIMS), which provided crucial information as to the distribution of the peptide in the lipid bilayers and most importantly confirmed their preferential localisation in the edges of the formed pores.

Further, AFM studies were then continued using time-lapse AFM in water which allowed pore formation to be observed under living, dynamic conditions. The researchers watched, for the first time, how small pores would form on the surface and continue to grow in size and numbers eventually removing the entire lipid membrane. Thus, by combining the physical information provided by AFM with the chemical information provided by nanoSIMS, it was possible to understand in detail exactly how antimicrobial peptides bind to membranes, porate and destroy them (Figure 2). 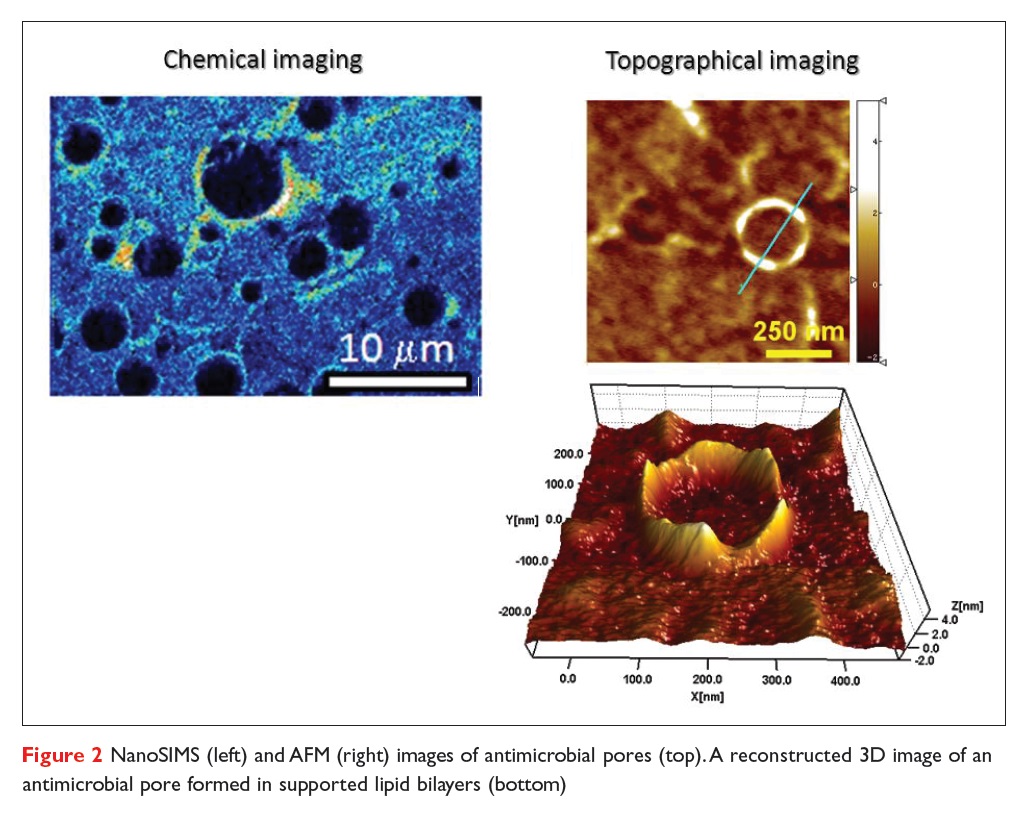 Indeed, although solid state NMR and neutron scattering had already been used to study pore formation, high resolution imaging techniques such as AFM and NanoSIMS used in this study had not, but proved to be critical in making the discovery of a fundamentally new mechanism of pore formation characterised by the expansion of initial small pores into larger, micron-sized, pores. Pore formation appeared to be driven by the migration of peptides within the edges of the formed pores and between different pores, with changes in physiochemical conditions promoting more peptides to do the same.

The observations are perfectly consistent with the biological rationale of antimicrobial peptides, the main purpose of which is to kill micro-organisms, not necessarily specifically, but quickly and in a co-operative fashion when many peptide molecules co-organise into membrane-disrupting groups, providing thus an efficient mechanism which upsets the equilibrium in which microbial cells exist, causing cell leakage, membrane collapse and eventually death.

Thus, observations made during this study review and add to the prevailing ideas about small stable pores, revealing a molecular mechanism for active pore expansion that will be helpful for drug developers when designing therapeutics based on antimicrobial peptides (6).

The research, originally reported in the Journal of Biological Chemistry, showed that these ‘antiantimicrobial’ sequences interact with the antimicrobial peptides to form inert molecular complexes, known as helical oligomers (Figure 3). 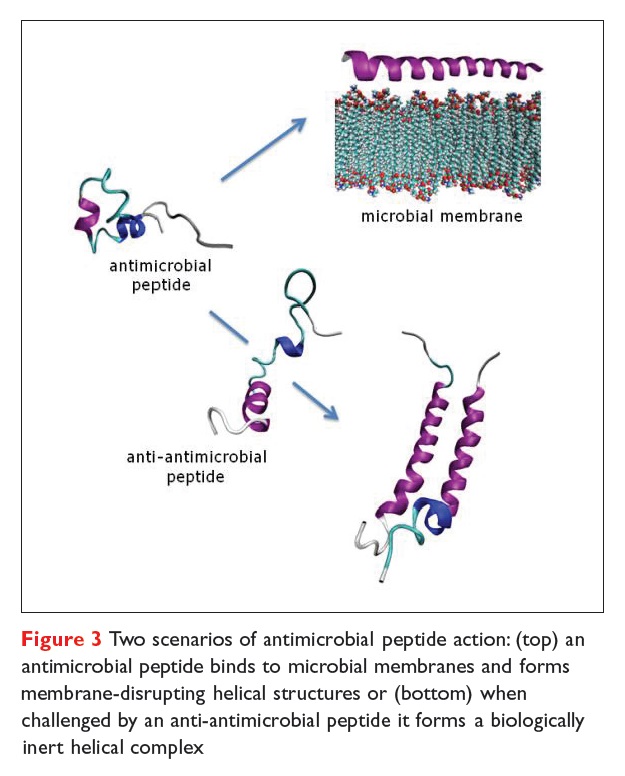 The team then studied the structural and biological properties of these inert assemblies in biologically relevant environments. The findings suggest that antagonistic sequences secreted by bacterial cells or expressed on their surfaces may cause efficient anti-antimicrobial responses. Although this remains to be shown in nature, it has potential implications for antimicrobial resistance.

Human antimicrobial peptides could present a real opportunity to avoid a ‘post-antibiotic world’ and pave the way for an alternative to current increasingly inefficient antibiotic treatment. Before embarking on the commercialisation of such treatments, and in order to convince pharmaceutical companies that they are worth developing, however, we need to know as much as we can about the processes antimicrobial peptides use to fight bacteria.

This will allow us to make use of their strengths and combat their vulnerabilities – hopefully creating a more effective and more efficient group of treatments as a result. These two studies helped us understand both the strengths and weaknesses of them, and provide a physical basis of bacterial membrane disruption that drug developers can aim to replicate when developing new treatments. DDW

This article originally featured in the DDW Winter 2013 Issue

Dr Max Ryadnov is Science Area Leader for Biotechnology at the National Physical Laboratory. He obtained his PhD from Lomonosov Moscow State University and Russian Academy of Sciences in 2000. After a postdoctorate in Sussex, he pursued independent academic research in Bristol and Leicester before joining NPL as a principal research scientist in 2010. His research aims at revealing exploitable design principles of biomolecular structure and function for prescriptive molecular diagnostics and therapy. Max holds a joined academic appointment with the University of Edinburgh and is a Fellow of the Royal Society of Chemistry.