Drug development for skin diseases based on functional genomics 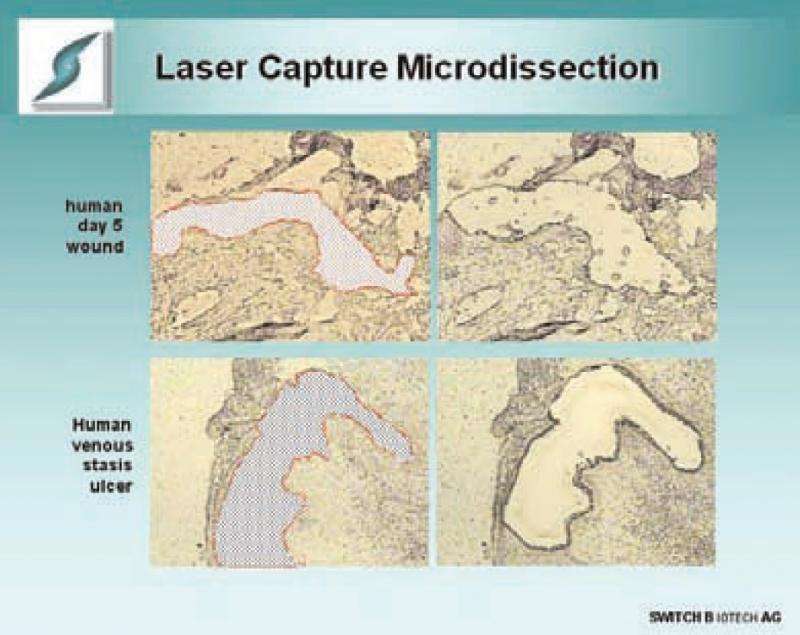 Drug development for skin diseases based on functional genomics

With the high number of sufferers from skin disease around the world, it is astonishing that there are relatively few treatments available and that many of these only serve to relieve symptoms. Can drug development based on a functional genomics approach be the answer in bringing new products to this ‘Cinderella’ market? 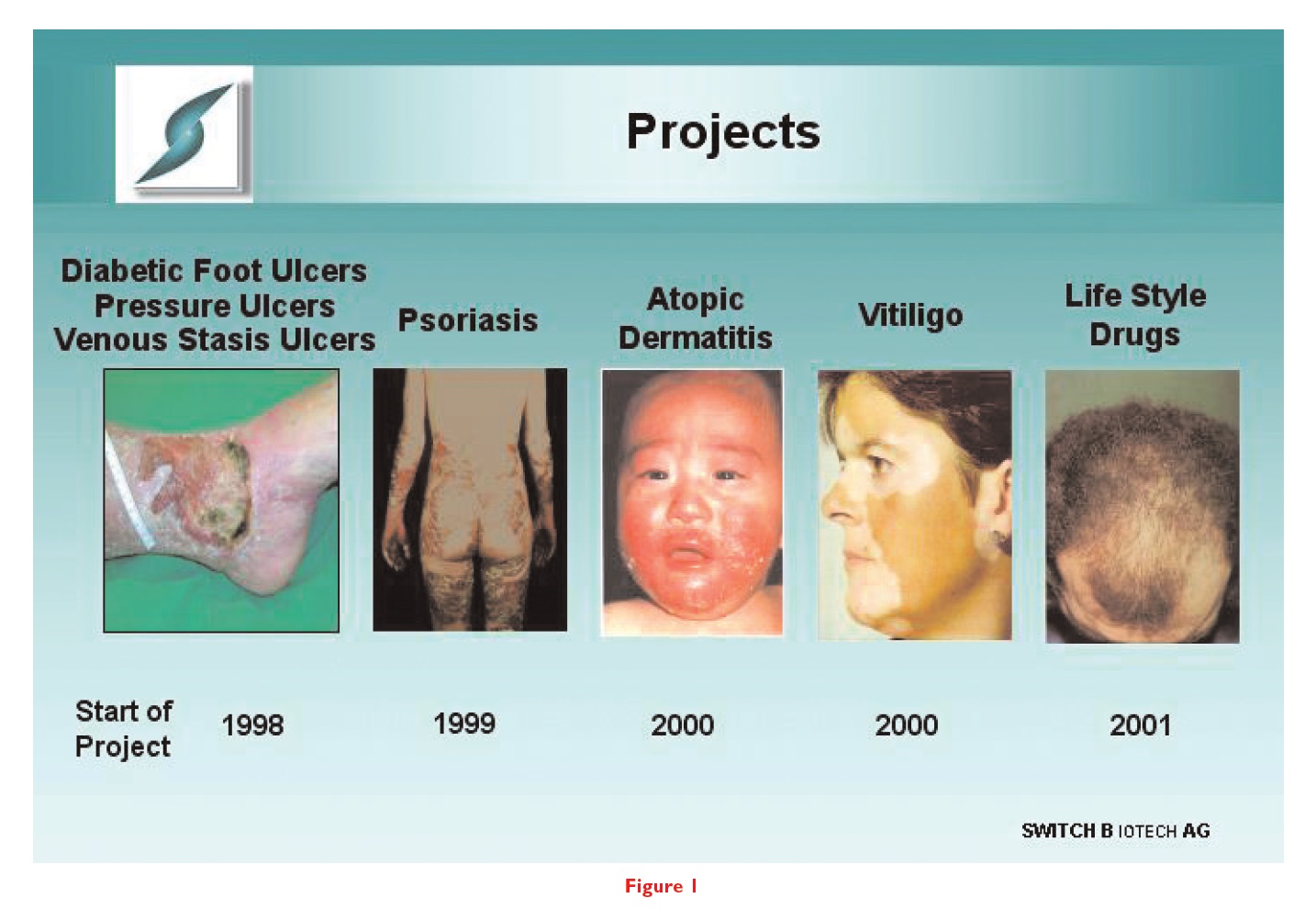 At present, only a few drugs are available to treat these diseases, and many of them do not address the cause of the disease, but only help to relieve its symptoms. However, the science of functional genomics has now opened the route to identify disease-related molecules and thus will allow to influence the course of both the disease and the healing process. The substances found with the help of these methods can frequently form the basis of novel drugs, with increased disease specificity.

How to identify targets and biologicals

Identification of targets and pharmaceutical active proteins can be achieved by using skin samples. To ensure a sufficiently large statistical population, several skin samples are taken from each of several hundred patients with appropriate anamneses. On the basis of the patients’ data, the samples are classified into sub-categories.

Subsequently, healthy and diseased skin from the samples are compared in respect of relevant physiological properties such as moisture content, colour (a measure of blood circulation through the skin) and transepidermal water loss (a measure of the skin’s barrier function). In this way extensive knowledge about the samples collected is built up.

The genetic analyses are performed on diseased tissue that is cut out of the skin sample with the help of a method called Laser Capture Microdissection. Each sample from each patient provides multiple ultrathin sections, and the disease- related cells are then isolated selectively, under the microscope, with a laser beam (Figure 2). 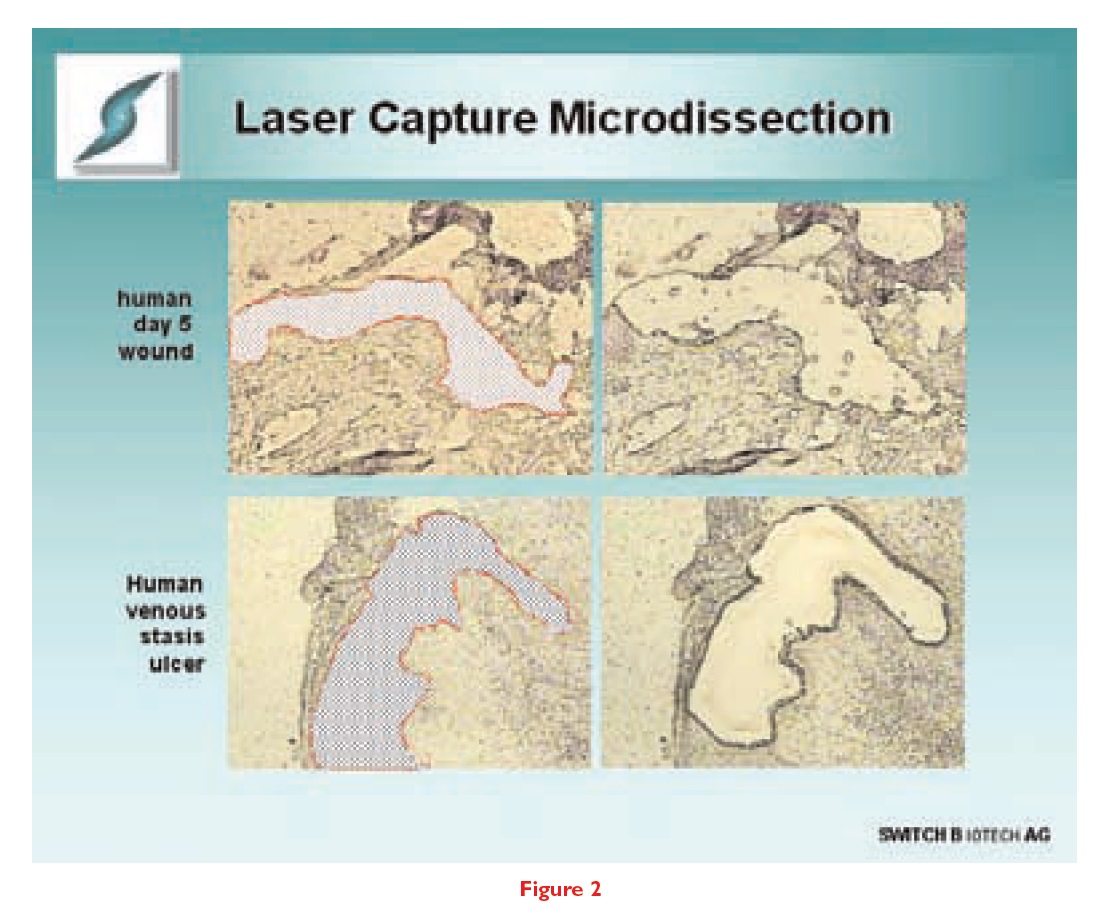 Thereafter, the expression pattern of the genes in the sample is determined by biochip methods, and this pattern is compared with the corresponding patterns in healthy skin cells taken from the same patient and in skin cells donated by a healthy volunteer. This knowledge can be supplemented, where relevant, by histological data and the results of in situ hybridisation and expression analysis, conducted before, during and after treatment of the patients. As models, parallel analyses of skin samples from animals are also carried out.

This analysis provides clues as to which molecules are active and which are inactive in healthy and diseased skin cells, respectively (Figure 3) and allows various molecules to be identified either as potential targets for drugs, or even as potential active drugs themselves. 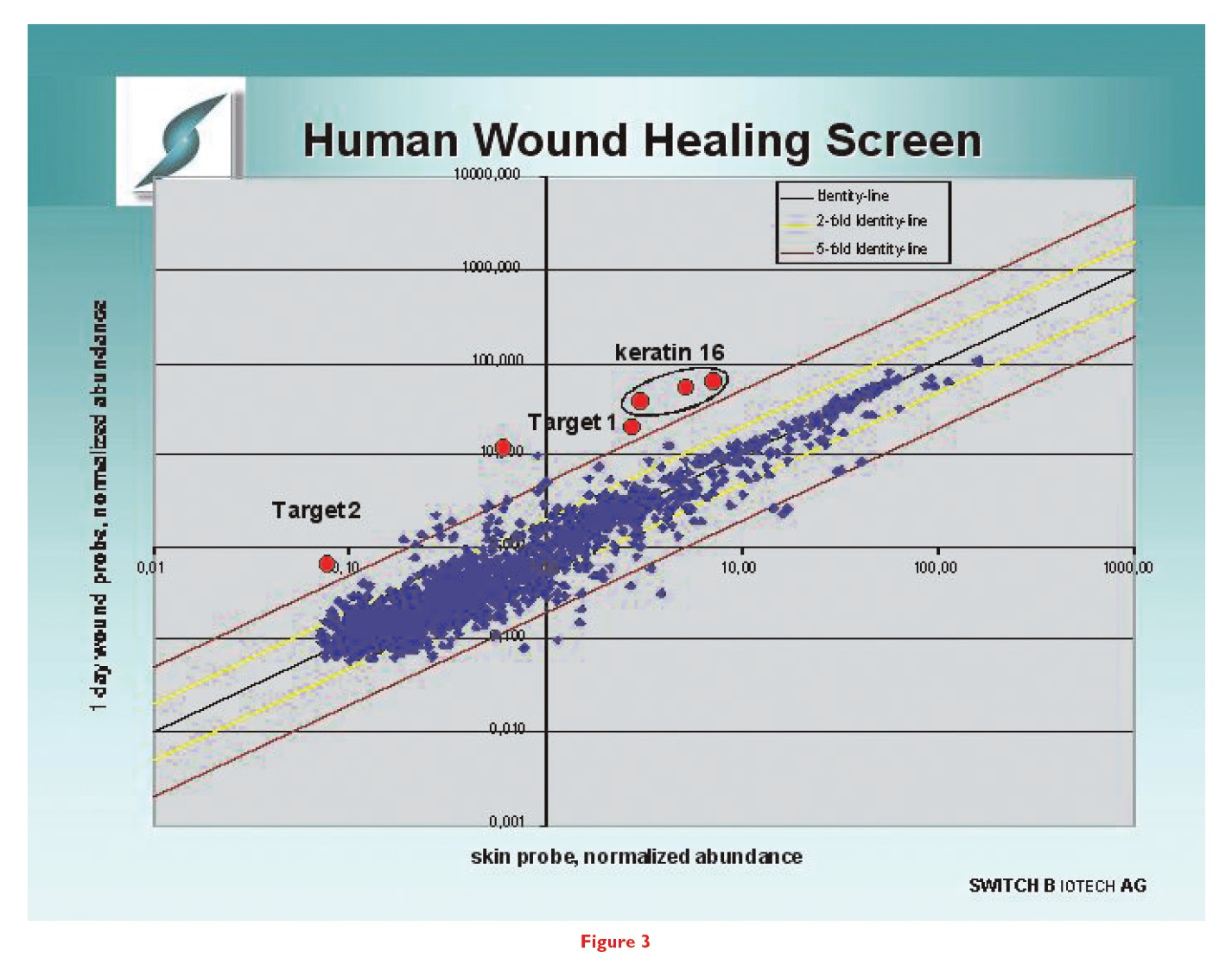 Comprehensive bioinformatic analyses will be used to evaluate the molecular pathology and drugability of the identified targets. The latter is, for example, given for secreted proteins, enzymes, receptors or ion channels. The therapeutic efficacy of the most promising molecules is subsequently investigated in predictive animal experiments, which is key to further development.

A number of established animal models have been used to investigate the modulation of the activities of various genes that encode medically relevant active substances or targets. Transient modulation of the corresponding genes has been achieved with the help of liposomes or the ‘gene gun’ (Figure 4). 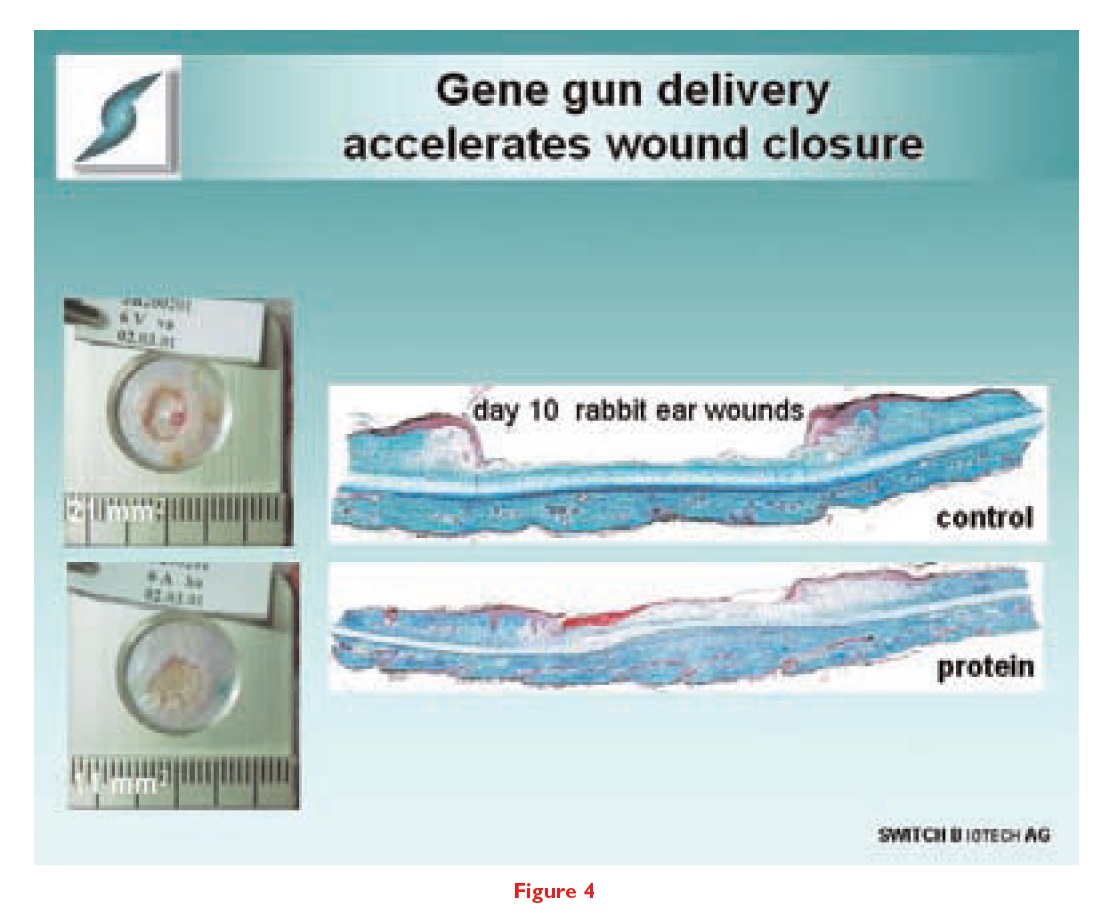 The direct accessibility of the skin conveys an immediate advantage, since the analyses can be completed within a few weeks. If permanent modulation is required, then transgenic or ‘knock-out’ mice can be produced and tested.

Another tool in use today is the grafting of human skin on to immuno-suppressed mice (eg SCID), in order to investigate the altered expression of human skin genes in living tissue. For example, biopsies taken from the skin of psoriasis patients are transplanted directly on to SCID mice. As a rule, blood circulation through the foreign (human) tissue is found about two weeks after transplantation to the mouse; the foreign tissue retains its pathologic state. At this stage, the expression of individual genes in the human transplant can be regulated by transfection with expression vectors or with antisense molecules and the effect on the pathological status of the transplant can be monitored.

A gene that has been validated as therapeutically effective in this manner is then tested to see whether the encoded protein itself is suitable for development into a commercial product, or whether an active substance must be found by the use of appropriate screening methods (see below). Candidates for direct use are secreted proteins, which develop their function outside the cell, for example when they activate a receptor on the cell surface.

In addition, the expression of the gene should be essential in the (acute) wound-healing process in healthy subjects, while in patients with chronic ulcers it is produced either insufficiently or not at all. Furthermore, the protein should be accessible (recombinant expression, separation, purification and isolation by current, economically viable methods). If a protein fulfils those criteria, a therapeutic regime in which the protein, in a suitable formulation, is applied topically to the affected skin area is feasible, which allow for a rapid development of the drug candidate.

If, on the other hand, genes are identified that are over-active in cases of skin dysfunction, then the protein in question is blocked by the use of antibodies.

At present, genes that are not suitable for the development of recombinant proteins and antibodies (‘biologicals’), are characterised in more detail by the use of high-throughput screening (HTS). To be suitable for this drug development approach, a target has to fulfil slightly different criteria compared to a ‘biological’ approach.

The target usually shows a higher degree of expression, or activity, in the diseased tissue in comparison with healthy skin. Most important, its activation in an animal model should afflict the symptoms of disease, and/or its inhibition (for example, by antisense molecules) should cause relief of these symptoms in skin transplants on SCID mice.

Comparable effects in cell-culture disease models are often also considered to provide sufficient evidence for a causative involvement of the target in the disease. In addition, the protein under investigation (eg, an enzyme, receptors, ion channels, signal transducers) should be amenable to modulation of its activity by small molecules (‘small chemical entities’).

If those criteria are fulfilled, a test system is developed for the measurement of activity and refined for use in high-throughput applications. After screening of a compound library to find compounds that modulate the activity in an assay, the substances detected are optimised for high efficiency and suitable medical chemistry characteristics (bioavailability, toxicology, etc.). During the screening and optimisation process, the animal models used for validating the targets provide invaluable assistance with guiding the choice of therapeutically active substances.

‘Surrogate markers’ for the pharma industry

The pharma industry has developed a strong interest in so-called ‘surrogate markers’, which can often give an early indication of therapeutic success (for a simple example, a reduction in blood pressure effected by treatment with a medication for a heart condition). Markers of this kind can be genes that are hyperactive in biopsies from patients, but whose down-regulation can give an early indication (eg, within 24 hours) of coming therapeutic success.

These markers can be very useful in the conduct of clinical trials of chronic diseases (a term applicable to most skin diseases), since they offer an approach to early diagnosis. Even only a short time after the first treatment, the physician and the patient know whether the therapy will be successful. If the gene that has been identified as a marker cannot be down-regulated in the course of a clinical trial, both the patient and the sponsor of the study can be saved a long and inefficacious treatment, with all its side-effects and costs.

Drug development based on a functional genomics approach similar to the one described above is now a standard in many therapeutic areas. Taken into consideration the specific advantages of the approach when applied to skin, it is astonishing to see that so far the approach has only been applied in a limited number of biotech and pharma companies with an interest in cutaneous ulcers and/or dermatology.

One reason might be that most of the larger pharma companies during the last years have simply ignored this therapeutic area. The market is now dominated by specialised, mid-sized pharma companies that possibly do not have the expertise in all the technologies required for the approach.

However, times are changing. Innovative products for atopic dermatitis and psoriasis have already been or will be approved and will enter this ‘Cinderella’ market in the near future. These monoclonal antibodies and small molecule drugs were originally developed as anti-inflammatory drugs based on targets involved in many different inflammatory diseases and not on skin disease- specific targets.

Still, they prove the potential for innovations in skin diseases and have already attracted more biotech and pharma companies to bring products on to this market. In addition, new biotech companies with a specific focus on skin diseases have been established during the past years. They already have built up the research basis for further product innovation. The first collaboration agreements between specialised biotech and mid-size pharma companies have been initiated that will combine the expertises in functional genomics, drug development, and marketing to bring the innovations to the patients. DDW

Dr Jörn-Peter Halle is Chief Technology Officer and a member of the board of directors of SWITCH Biotech AG. He read biology at the University of Constance, and obtained his doctorate there for a thesis on the molecular basis of ageing. He then moved to Munich, where he spent four years working in a collaborative project on biochemical aspects of gene regulation at the GenCenter of the University of Munich. Thereafter he went into business, beginning as a consultant in bioinformatics and then, in late 1997, joined forces with other scientific colleagues to set up SWITCH Biotech. There he built up the company’s activities in the areas of bioinformatics, knowledge management, patents and licences and technological development. Since 2000 he has also been the board member responsible for personnel development and public relations.