The role of ZEBRAFISH in drug discovery 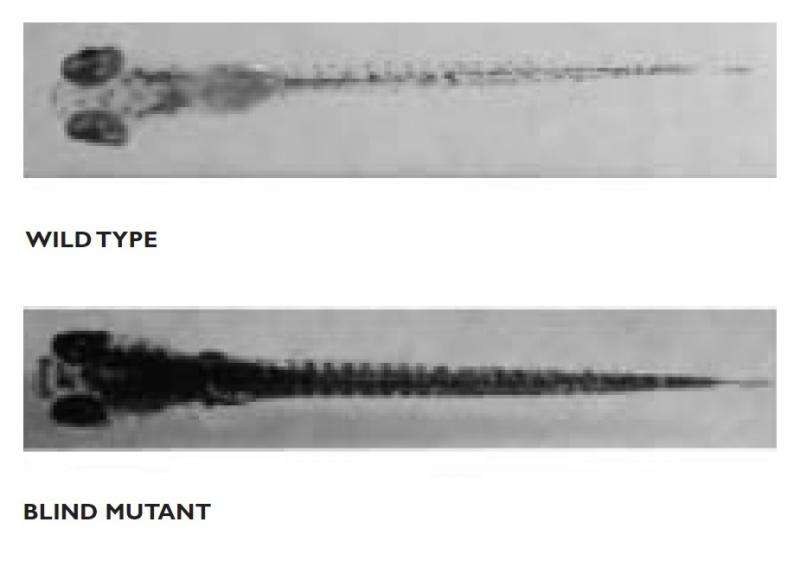 The role of ZEBRAFISH in drug discovery

The NIH has ranked the Zebrafish as the third most important experimental organism after man, the Sanger Centre is sequencing the genome and many medical researchers are shifting over to it. But will the zebrafish have a role in drug discovery?

Will the Zebrafish suffer with the same issues which have beset the invertebrate model organisms? This article explores why, used appropriately, this need not be the case and how zebrafish may add value to particular steps of the drug discovery chain.

The headline USP of zebrafish is the unique combination of in vitro scalability in a vertebrate model.

They grow rapidly, with a single pair of adults producing 100 to 200 offspring per week. A modest facility can generate millions of embryos per year. Nearly all experimentation is conducted in the embryonic and larval stages when they are no bigger than a fly. At this stage they can live in 100ul of fluid, enabling experiments to be conducted in 96 well plate formats.

Maintenance costs of zebrafish are less than 1/1,000th of the cost of a similar study in mice. The rate of acquisition of data is also correspondingly fast. There are also strong ethical advantages to conducting more research at embryonic stages in lower vertebrates, in the strive to reduce, replace and refine (1). 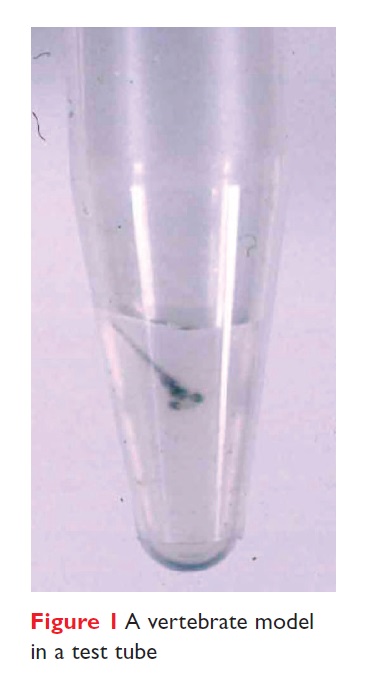 To look with the naked eye, one can underestimate their relevance, because at the molecular and cellular level there is a remarkable similarity to humans. They have an immune system, bones, a digestive, nervous and cardiovascular system. Indeed, there is a growing body of evidence of the similarity of most organ systems. 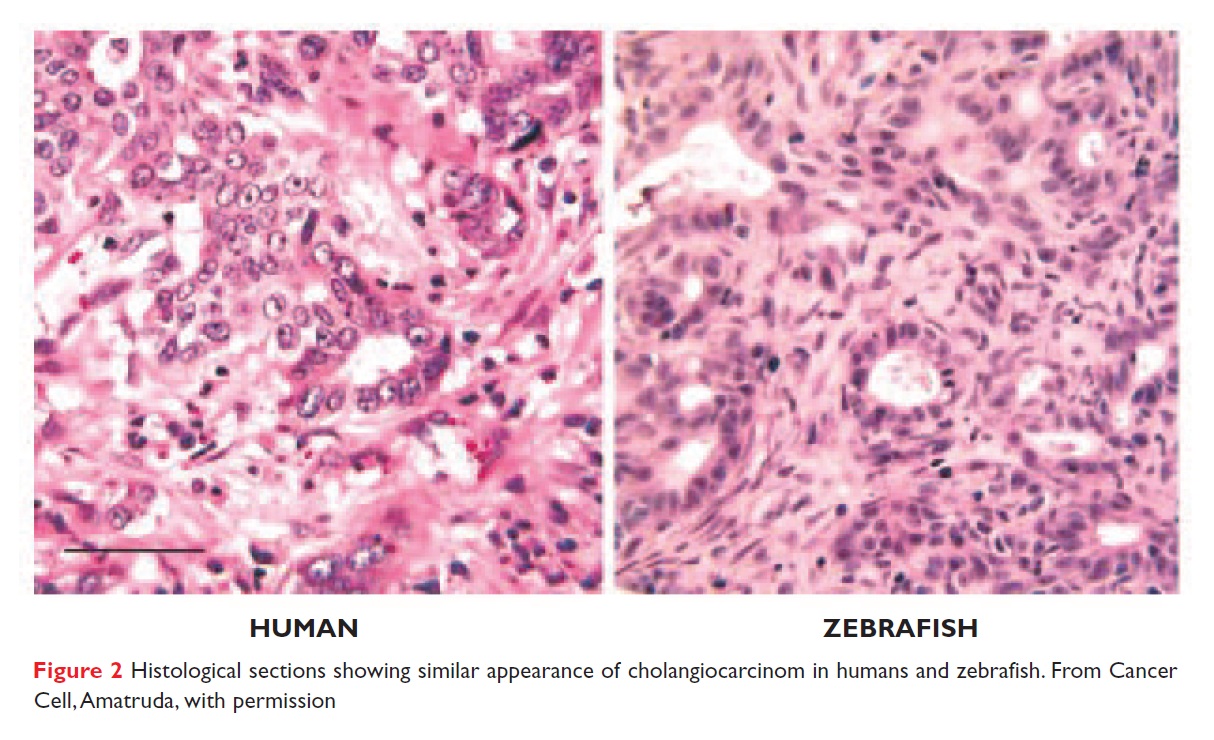 The huge cost savings over mammals is a big plus in the favour of zebrafish, but in certain cases there are additional benefits to the zebrafish model. Examples include:

– Their transparency means the internal organs can be directly visualised, making assessment of physiology and pathology easier. For example, blood cells can be followed as they travel along blood vessels. The screening capabilities engendered by this direct visualisation have accelerated the development of models of thalassaemia (9), haemochromatosis (10) and erythropoeisis (11). Similar studies are under way looking at zebrafish white cells (12). Models of cardiovascular function such as atrial fibrillation have been identified, as well as a large number of angiogenic mutants (http://zon.tchlab. org/, www.exelixis.com/discovery/angio).

– Their rich colour vision, and corresponding cone dense retina are important considerations and are distinct advantages over the rod-dominated rodent. Indeed, the evolution of rodents to a nocturnally-tuned retina is reflected genetically. For example, the retinal guanylate cyclase-activating proteins GCAP1 and 2 are expressed in human rod and cone photoreceptors, with GCAP3 expressed solely in cones. In contrast, GCAP3 is not expressed in the mouse retina. However, as in the human retina, GCAP3 is found in zebrafish cones (13). This makes the zebrafish a good model for vision diseases given the clinical dominance of the macular (cone) degenerations.

A lot of the skill and effort put in to developing a truly useful model for drug discovery is not just making the model relevant to human disease, but in making the read-out of disease severity rapidly assayable and gradable. The transparency and direct visualisation of internal organs clearly helps in that.

The ability to analyse behaviour in a highthroughput fashion also helps when looking at CNS physiology and pathology, such as addiction, sleep and vision. For example, zebrafish adapt their pigmentation levels to blend in with the background as a camouflage response. Many blind fish think the reason they cannot see is because they are in a dark environment and consequently turn black. If this happens, it offers a very rapid screening method.

This can be elicited in the laboratory by moving horizontal stripes below long transparent chambers in which the fish can freely swim. This provides a very quick and easy way of screening a whole shoal of fish. This permits in vivo screening of certain aspects of the drug discovery process, as described later, with a throughput not possible with other vertebrates. 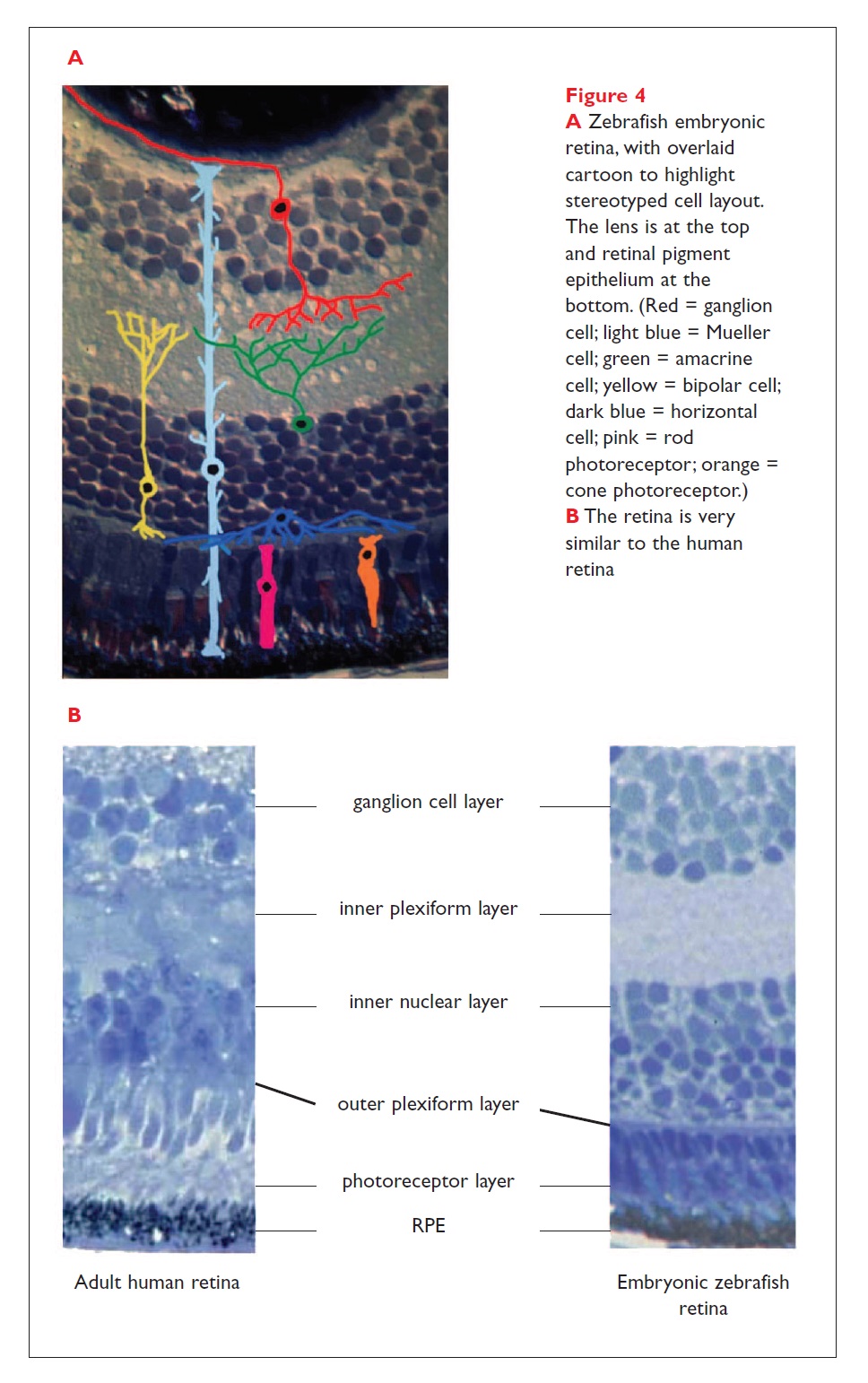 The ease of genetic and experimental manipulation make the zebrafish useful for pathway dissection. This is the principle use for which academics are using zebrafish, for example the stimulation of erythropoiesis by inhibiting a new haematopoietic death receptor (14) or the discovery and analysis of the pathways involved in the differentiation of arteries from veins (15).

A recent article in Nature Drug Discovery (16) argued that mouse knock-outs could have predicted the targets for many of the current top selling drugs. While this may be true, the converse is more important: how many knock-out models do not predict useful drug targets? How do you know which disease-associated protein, or component of a pathway, when targeted by a drug, will be the most therapeutically useful? Indeed, the beneficial effect of the knock-out may only be apparent when in the context of the diseased states.

One very powerful method of addressing this question is apparent from those rare individuals who are naturally protected from human disease, for example, the prostitutes who are constantly exposed to HIV, yet do not seroconvert (17). Or those individuals with osteosclerosis, who as a result of a mutation in the sclerostin gene have dense bones and are thus at lower risk of osteoporosis (OMIM 605740).

In essence, these are nature’s own suppressor screens. A drug acting at this ‘rescuing’ target may have a similar beneficial effect on the disease state in the normal patient – by inactivating the normal protein it would be mimicking the effect of the suppressor mutation. This approach is particularly useful if the rescuing mutation inactivates the normal protein, given that antagonists are easier to identify. Depending on how the screen is engineered, loss of function suppressors can be preferentially identified using a variety of genetic techniques.

The scalability and genetic tractability of zebrafish offer a way of identifying such rescuing mutations in a more systematic manner across a wider range of diseases, as illustrated below. In a pilot study run along similar general principles, 12 putative rescued strains have been identified in an epilepsy screen and the underlying rescuing gene being mapped (Baraban, DanioLabs). The disease suppression was inherited in a recessive fashion, making a loss of function suppressor most likely.

As the concept of one gene: one protein: one action dies, the need to move as rapidly as possible to an in vivo system becomes ever more apparent. It is the complex interactions of a network of proteins which needs to be understood. And in the disease state manipulated. It is the complexity of these networks which is one of the reasons for the failure in translation of in vitro to in vivo efficacy.

Clearly the sooner a drug target, or indeed a drug, is tested in an in vivo system the better. Manipulation of a particular target in vivo in the disease state helps address the former, while the following attributes help the latter:

– Easy administration of drugs directly into water.
– Live in 50-100ul, so tiny amounts of drug necessary.
– Many human drugs seem to work as predicted in zebrafish (eg steroids, anticonvulsants, NSAID).
– DMSO tolerance.
– Good absorption.**
– Can arrange in 96 well plate format.
** This refers to absorption from the fish water and not ADME studies.

Providing one remembers that it is the human protein one is ultimately targeting, this offers a powerful test system. For example:

– There is a suggestion in the literature that targets x, y and z may be involved in a disease, and there are compounds already available which have activity against these putative targets. A zebrafish model could be used as a filter to rapidly and cheaply test. If the compound has a beneficial effect on phenotype, it has gone some way to validating that target. A HTS might then be run against the human target.

For example, it is highly desirable to test an osteoporosis target in a living animal. Even if the crystal structure of the target is known, one cannot be certain of the interactions taking place and altering structure in vivo. A certain amount is already known about the pathogenesis of osteoporosis, with possible targets evident. For the similar cost of a conventional assay, tens, hundreds or indeed thousands of compounds could be tested to see if compounds actually work on the phenotype at an earlier stage of the development process. Doseresponse curves could then be generated. This is a useful filter.

– You have compound(s) you know interact with a particular target, but are unsure of which diseases they will work in. Testing against a range of models, cheaply and rapidly, may help. This is potentially useful for all of the targeted libraries – GPCRs kinases, ion channels etc.

In all of these cases the system is not being used as a black box against an unknown target, and ultimately it is the human protein that needs to be targeted. There are clearly going to be issues of receptor differences between species, as they are for any model system, so a negative result is less useful than a positive one. But this may be a filter in the development process, prior to the step to mammalian testing.

This can be done in zebrafish. A recent manual screen examined 400 compounds per person per day (18). Two per cent of compounds tested were early developmental lethal and 1% had a specific effect on the phenotype under examination. The potential problem with random drug screening is that the target will be unknown, making the lead optimisation process difficult. However, protein pull down techniques are beginning to overcome these problems and allow identification of the target. Complex conditions such as addiction, anxiety and depression may be screenable in zebrafish and may be particularly appropriate to such an approach.

Here, either the target is already known, or if not, it doesn’t matter so much as there is already human data. Given that an unexpected result is in many ways the most desirable, there is an argument for testing all compounds which have ever entered clinical trials and have been mothballed in as many models as possible. Testing all the known drugs versus a range of phenotypes could be very interesting, particularly for complex CNS conditions.

Thinking about clinical trials, add on trials may be easier to do, or the only practical way of conducting a trial. Data about the effects of two or more drugs in combination can only be derived from an in vivo system. A matrix of combinations can be tested in a high-throughput way. For example, there are many different types of anti-inflammatories on the market or in development. Which two, three or four would work best when given together? Note, here we are talking about the output of phenotype, not metabolising interactions, which may well be different in zebrafish. 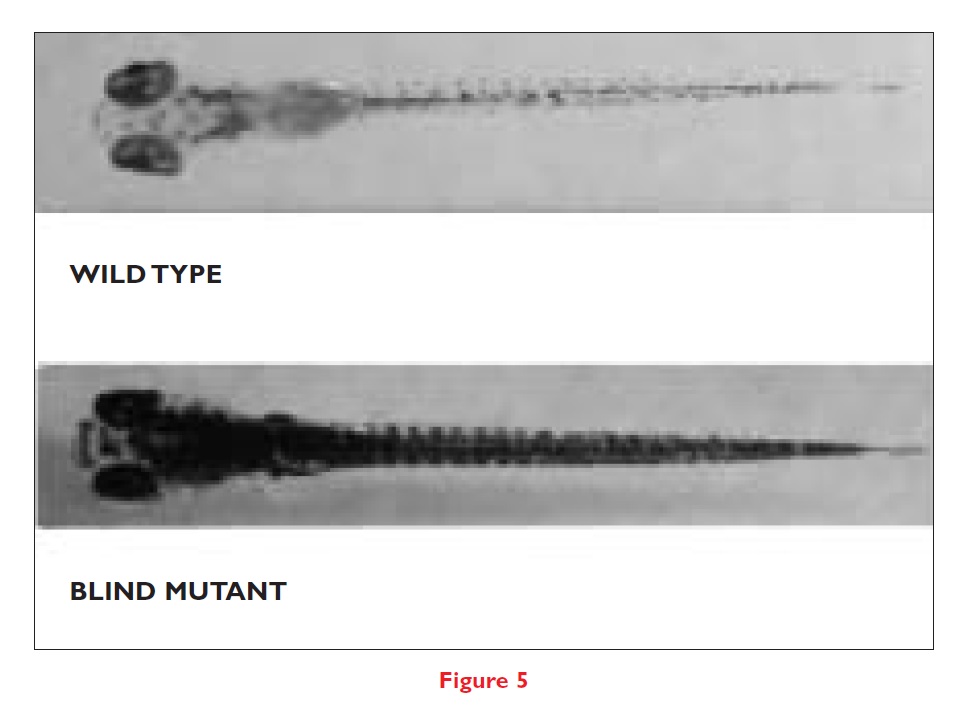 The zebrafish has emerged at the right time to benefit from the hard lessons learned from the use of other model organisms in drug discovery, so that, used in the right way, significant value can be added to the drug discovery process.

This article originally featured in the DDW Spring 2003 Issue

Dr Paul Goldsmith is a clinical neurologist with a PhD in retinal degeneration. A graduate of both Oxford and Cambridge Universities he is now Director of Research and Development at DanioLabs, an opthalmics and neurology focused therapeutics company utilising zebrafish as part of one of its platforms.

Roberto Solari is currently an advisor to Apax Partners Ltd. He is a molecular cell biologist who has worked in academia and in the Pharma industry with Glaxo and GlaxoWellcome. In recent years he has been involved with a number of biotechnology start-ups including Astex- Technology and Lorantis.