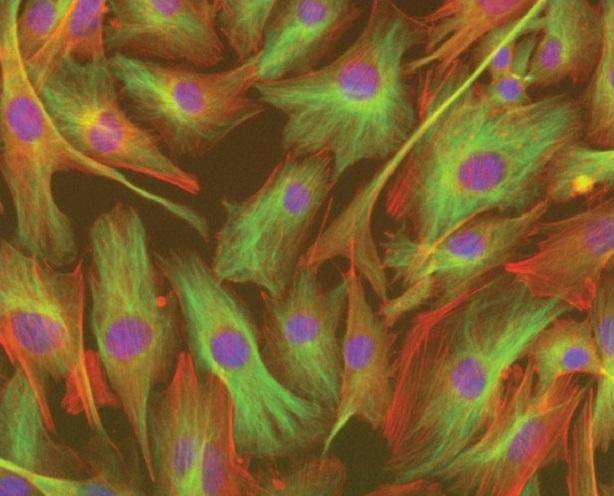 Two market surveys and a recent major scientific meeting have all highlighted the growing interest in High Content Screening (HCS) and point to the momentum which now surrounds the implementation of high content analysis tools.

Despite uncertainty over the definition of HCS, there is no lack of agreement as to potential importance that HCS may play in delivering a functional readout and higher throughput to siRNA target validation studies. Although most respondents surveyed could not yet confirm the usefulness of HCS, its contribution in primary screening is predicted to rise to around 7% of assays, with detection instrument sales approaching 150 units/per year in 2005. Time will tell if the hype justifies the hope now being invested in HCS to enhance screening quality!

The meeting was opportune as it coincided with the publication of two new market reports (HighTech Business Decisions (HTBD) – High-Throughput Screening 2003: Improving Strategies, Technologies, and Productivity (www.hightechdecisions.com) and HTStec’s – Detection Trends 2003 (www.htstec.com)) of scientists involved in high throughput screening that revealed an increased demand for higher information content and a notable shift in interest towards high content screening.

In fact, HCS was ranked by respondents in the HTBD survey as the most promising drug discovery technology. While 92% of respondents surveyed by HTStec want higher information content from their detection instruments and ranked greater applicability of cell-based (functional) assays and simultaneous multi-parameter readouts (together recognised as key components of HCS) as the approaches of greatest value towards achieving it.

Despite almost full agreement on the need for higher information content, there was little consensus among respondents to HTBD’s survey on the definition of HCS (Figure 2). 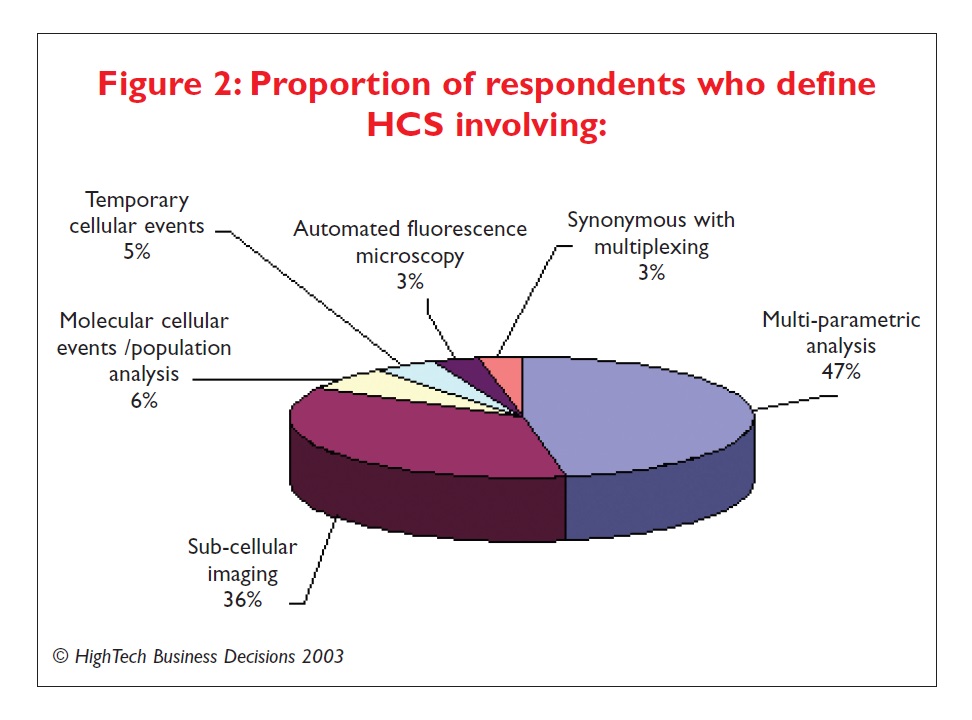 By far the greater majority (47%) believe it involves multiparametric analysis, although the requirement for sub-cellular analysis (image analysis of sub-cellular and intracellular events) was also specified by a major proportion (36%) of the remaining respondents. Other less cited definitions involved either: molecular cellular events/population analysis (6%), temporal cellular events (5%), automated fluorescence microscopy (3%) and a number of respondents (3%) who understood HCS to be synonymous with multiplexing.

Similar disharmony over the definition of HCS was apparent in the discussions at the CHI Meeting, although the consensus was that it involved high throughput microscopic image analysis, deriving vast amounts of multi-parametric information from cells in a rapid fully-automated fashion.

The increased importance now being given to HCS can be traced back to the current perception of the bottlenecks in the drug discovery process (Figure 3). 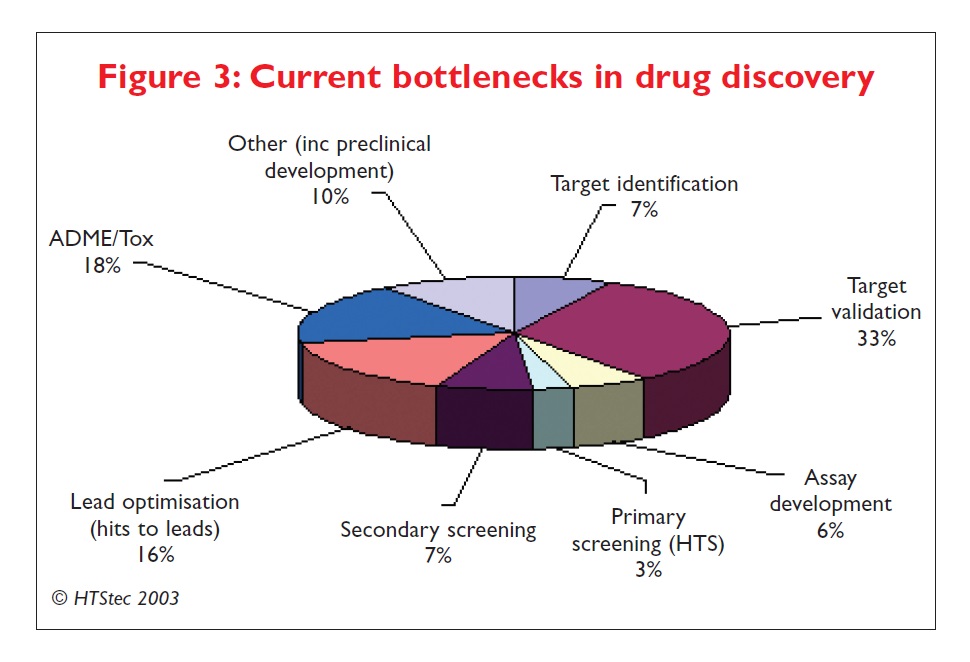 No longer do primary screening (ie HTS) and assay development feature as main bottlenecks. Target validation was cited as the most important bottleneck by one in three of respondents surveyed. As one respondent put it: “Finding targets from the vast array of genomic/proteomic information available is a challenge, but finding targets where there is a clear disease association that are likely to make a good drugable target is even more of a challenge.”

Drug discovery activities downstream of primary screening also featured highly and combined contribute to approximately 50% of the perceived bottlenecks, with ADME/Tox (18%) cited as the main post HTS hurdle. When asked what their main focus would be to overcome hurdles in drug discovery they very clearly (54% of respondents) highlighted the importance of cell-based techniques, such as HCS (Figure 4). 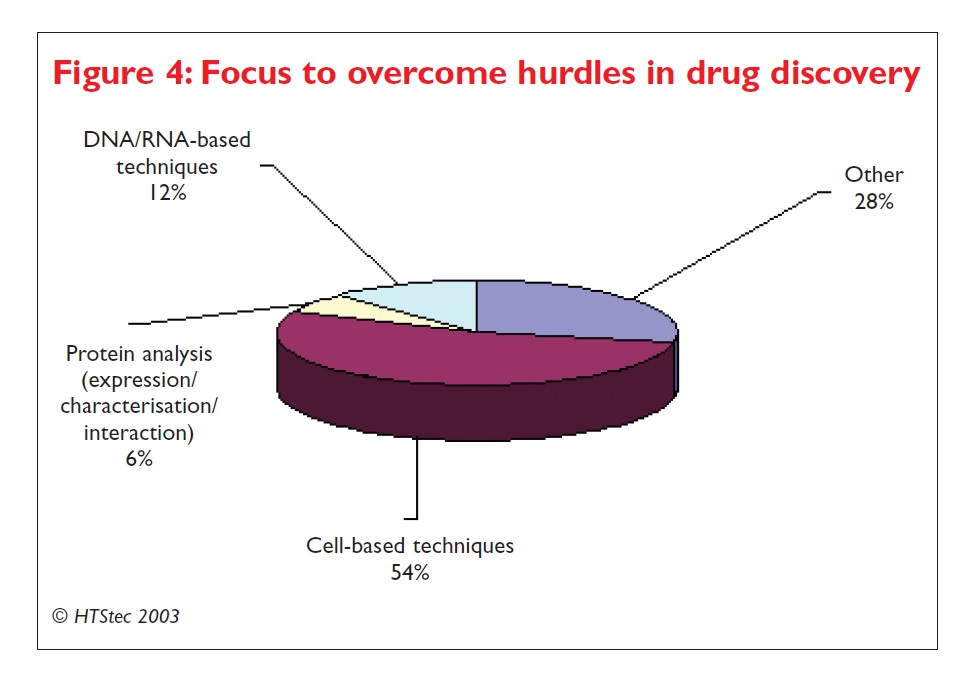 Interestingly, the importance of DNA/RNA-based techniques was also cited by 12% of respondents as their focus for overcoming hurdles. The use of small interfering RNA (siRNA) (RNA interference (RNAi) mediated gene silencing) emerged at the CHI meeting as probably the fastest growing application area for HCS, bringing the power of a functional readout and higher throughput to siRNA target validation studies. This observation is consistent with where respondents viewed the usefulness of HCS (Figure 5). 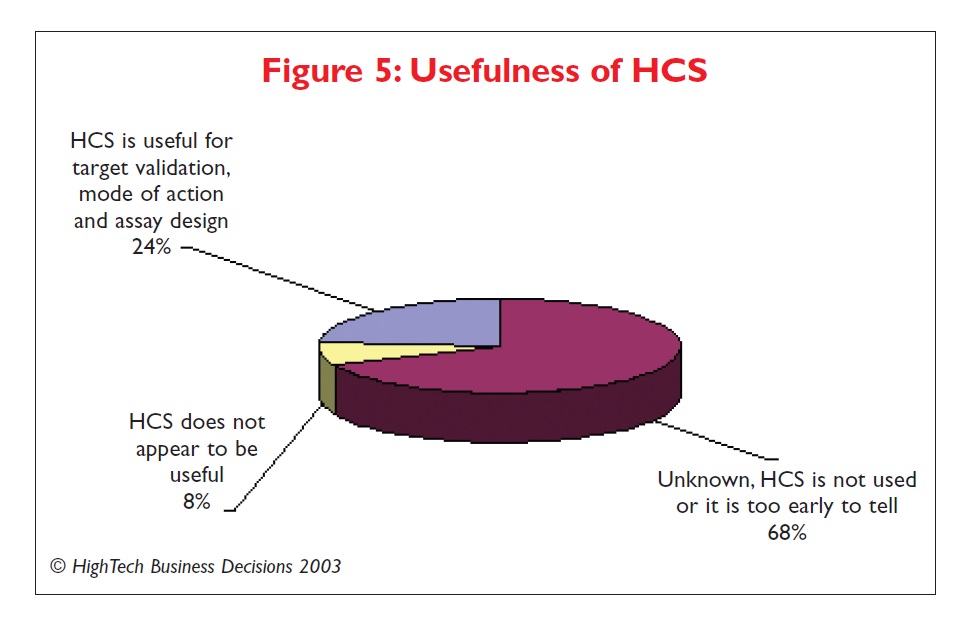 Of those who have found HCS to be useful (24% of the HTS Directors interviewed for the HTBD study), it was in the areas of target validation, mode of action and assay design.

The majority of the HTS Directors in the HTBD study (68%) were not able to confirm the usefulness of HCS as they either had not yet used it or it was too early to conclude from their experiences. Only 8% of respondents believe or have shown HCS not to be useful in their applications.

When respondents were asked about their current, planned or possible future use of HCS we see that only about one-third of respondents use it today and current use is greatest in secondary screening (19% respondents). 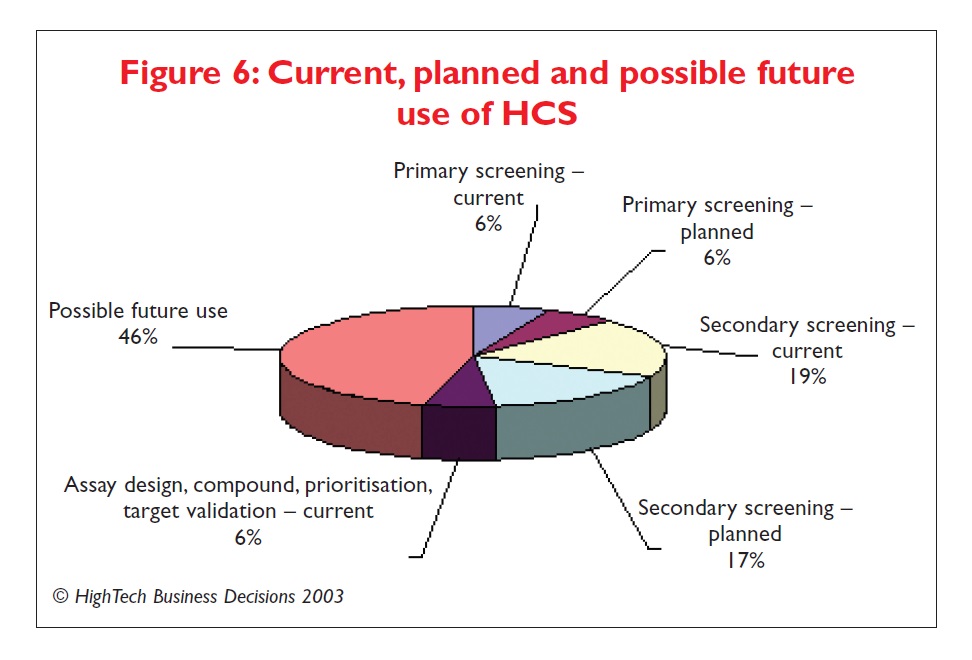 The greatest planned use is also in secondary screening, with only limited expectations for immediate primary screening (6% respondents), which probably reflects the current widespread industry concern about the throughput of existing instrumentation. Interestingly, a large proportion (46%) of respondents predicted possible future use of HCS, but were undecided where the technology will actually be applied. This is not surprising as most people are still understanding what they want or need, how these new tools work and what all the imaging measurements mean.

As a percentage of all detection modalities used in primary screening today (2003), HCS fluorescence detection currently contributes less than 4%, although this value is predicted by the HTBD report to nearly double by 2005 (Figure 7). 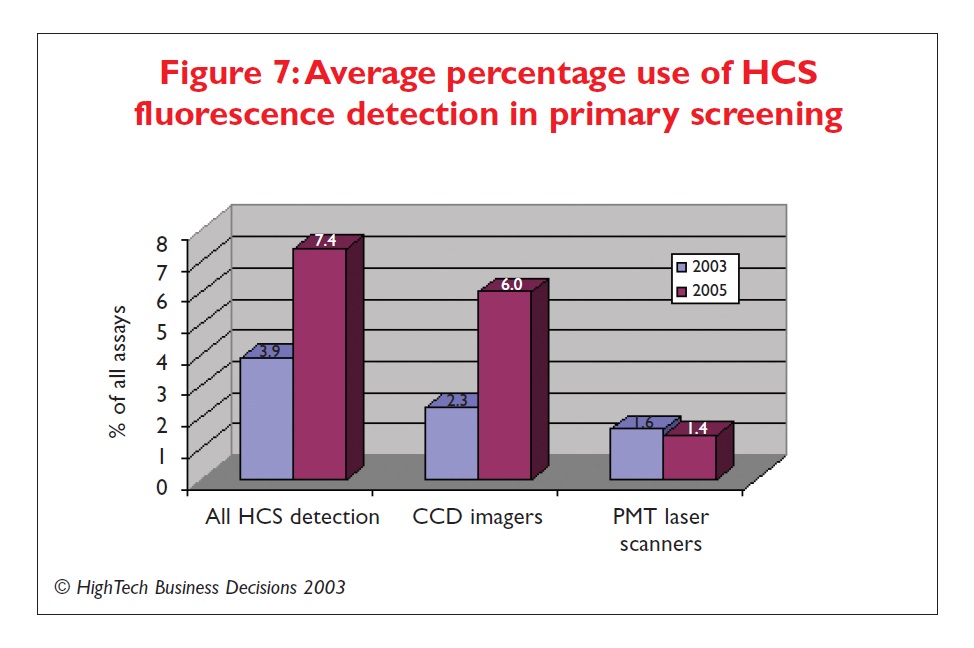 The proportion of these HCS fluorescence primary assays done using CCD imaging instruments looks set to show the biggest increase in 2005, while those based on PMT laser scanning devices appears to remain static. One aspect the HTBD report highlighted was the differing opinions that surround throughput versus image resolution (quality) and the merits of CCD imaging versus PMT laser scanning devices, all of which is indicative of a general lack of experience (education) among some potential end users.

The predicted growth in the HCS detection market in Pharma was estimated in the HTStec report (Figure 8), which estimates a near doubling in the total number of units sold per year by 2005. For this study respondents were asked to provide information on instruments purchased in 2003 and to estimate purchases planned for 2004 and 2005. 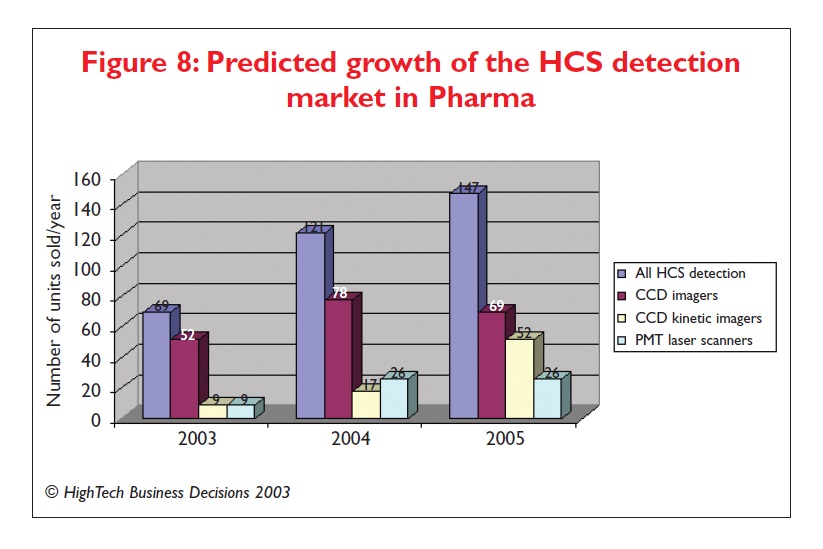 Instruments were allocated to one of three categories:

Although the majority of HCS analysis today involves fixed cell (end-point) assays, interest in live cell assays is emerging which may account for the surveys finding that moderate throughput CCD kinetic imagers look set to show the biggest growth in sales by 2005. However, it is not clear if this reflects the flexibility of these devices, with integrated liquid handling, temperature control and transmitted light modules to support a range of application, including real-time live cell kinetic imaging, or if respondents felt these devices represent a more cautious (cheaper) entry to the technology than the high cost, higher throughput CCD imaging alternatives (eg Amersham INcell Analyzer 3000, EVOtec Opera).

However, it is not the intention of this article to review in detail the increasingly wide range of suppliers of high content analysis tools (see Table 1) but rather to highlight a few topics that were raised at the CHI High Content Analysis Meeting. 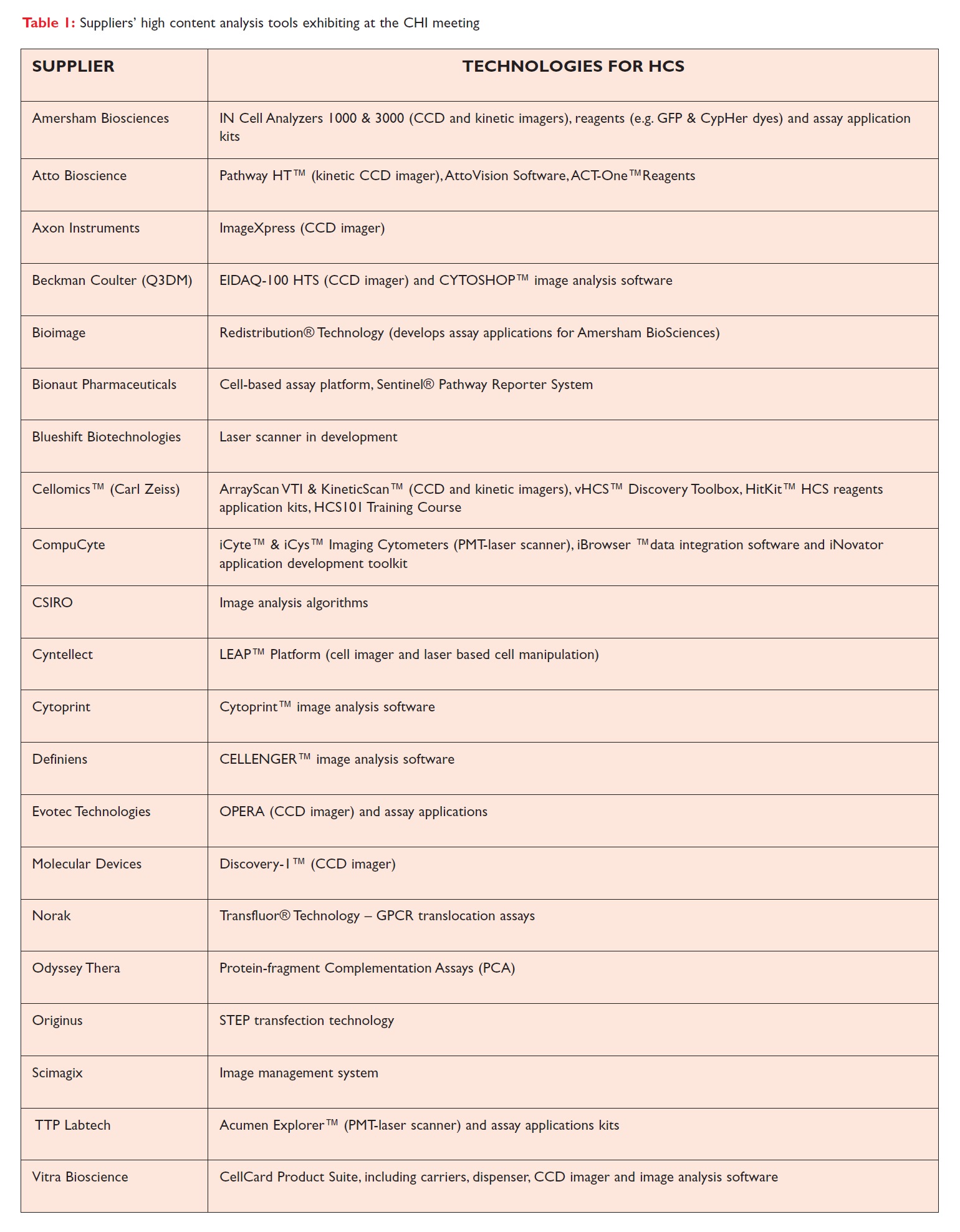 In a panel discussion on an HCS ‘Dream Machine’ the majority agreed no one instrument today could currently provide optimal throughput with optimal data fidelity for all applications and concluded that a repertoire of instruments may be desirable ie CCD Imagers (eg Cellomics ArrayScan) could coexist with PMT-lasers scanners (eg Acumen Explorer) in the same lab to synergistic advantage. 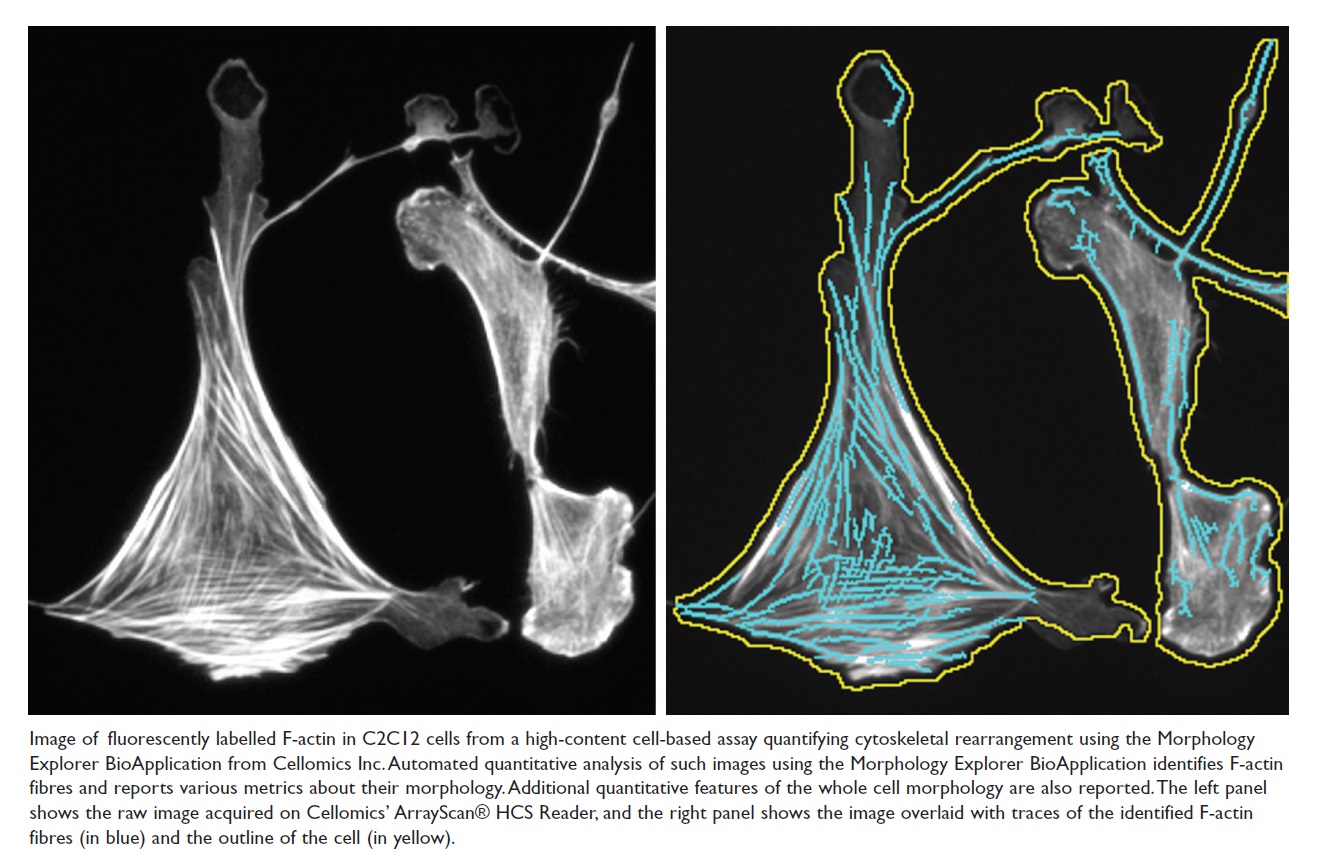 The lack of knowledge (education) in the user base is still perceived as a significant limitation, particularly as HCS expertise is rarely focused in just one lab but spans a whole range of departments and disparate interest groups. It is very clear that the potential customers in an organisation need to understand how to interpret and use the information HCS will generate. Another frequently highlighted concern is the need to standardise the file format of the images generated and to get away from proprietary image formats.

Lack of an industry standard data format currently causes inconvenience as image analysis and data manipulation often involve multiple data mining applications. Standardisation will also open up the market to third party algorithm developers to support new applications which are not aligned to any specific instrument platforms, so end users can choose the best available algorithm for their application, not the only one supported on their purchased platform. 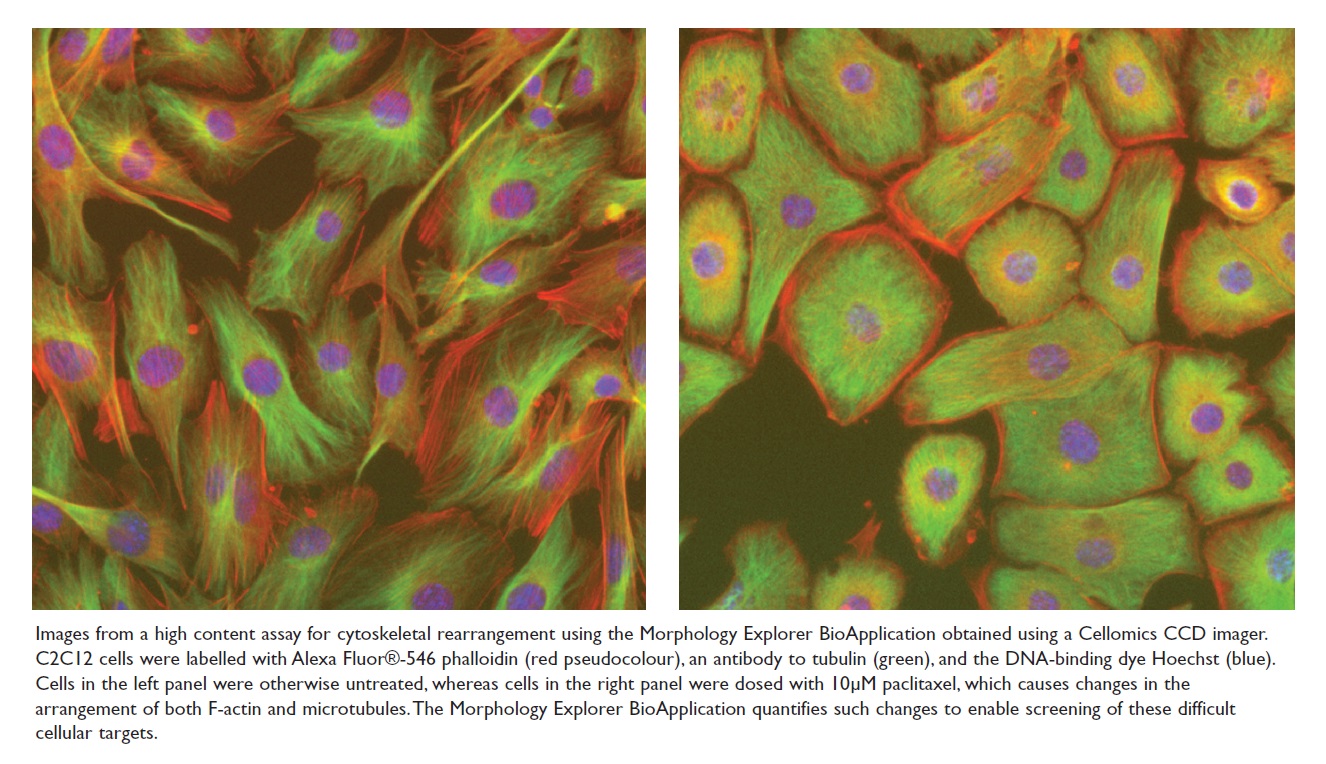 Algorithms can be defined as the software routines that analyse images, recognise patterns and extract measurements relevant to the biological application, enabling the automated quantitative comparison and ranking of compound effects. The current lack of availability of alternative algorithms that support emerging applications is a significant bottleneck for many.

Fortunately several companies active in automated image analysis (eg CSIRO, Definiens, Cytoprint) are keen to assume this role. However, users still lack methods to validate or to compare the algorithm’s claims and currently no standard set of images is available to facilitate comparisons across different platforms and algorithms. Consequently, few users today have reached the point where they feel comfortable with deleting the millions of raw images they may generate, thereby necessitating terabytes of data handling and storage.

As with all other assay methodologies, false positives are a big problem in HCS. However, increased understanding of the common failure modes (eg compound auto-fluorescence, cytotoxicity, over confluence of cells and confounding phenotypic changes) means it is now possible with HCS to better understand false positives and to device fully automated strategies to rapidly flag outliers.

However, in fairness there is not universal acceptance of the value of HCS and it is not difficult to find individuals in the Pharma industry who won’t be joining the rush to implement it.

Are the majority of the industry right to assume they will increase quality simply by investing in HCS? Does it really make sense to reduce all this high information with algorithms down in many cases to just one number? What are the average assay development times, especially where new algorithms are required and your preferred cell lines cannot be used for pattern recognition? Has there been a clear analysis of the added value for HCS compared with what you could do today easier, quicker and cheaper by conventional screening methods eg GPCR translocation assays based on reporters? Others see problems in differentiating between compound side-effects on sub-cellular components and those that are really important to the drug’s mode of action.

The reality is, however, that HCS analysis tools have taken many years to evolve the current level of development and it seems today that the momentum is such that they are destined to be increasingly deployed throughout drug discovery. Time will tell if the hype justifies the hope now being invested in HCS! DDW

Sandra Fox is President and Founder of HighTech Business Decisions, a consulting firm specialising in customised market analysis, industry reports and customer loyalty studies for suppliers serving the pharmaceutical and biotechnology industries. Enquiries related to accessing both market reports referred to in this article should be directed to HighTech Business Decision. Tel: +1 925 631 0920. Web: www.hightechdecisions.com