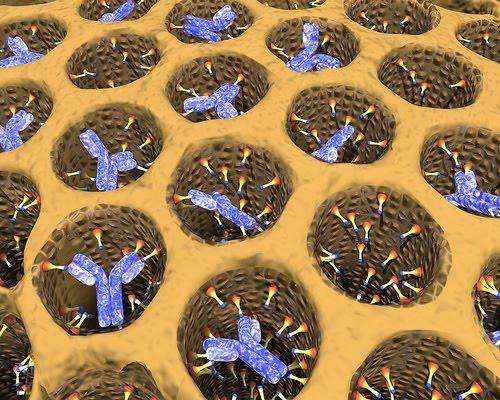 By Dr Patrick A Baeuerle

Antibodies available today for cancer treatment, while effective, are typically used in combination with standard therapies because their activity as monotherapy is limited.

Currently, four conventional antibody products dominate the oncology market with combined sales in excess of $10 billion in 2006: Rituxan, Herceptin, Avastin (all from Genentech/Roche) and Erbitux (Merck Serono). Despite their blockbuster status, each antibody is marketed for only a small segment of patients, while many of the most frequent human cancers cannot be treated with these antibodies.

For example, there are no antibody therapies currently approved for the treatment of ovarian, gastric, pancreas, liver, bladder, brain or prostate cancers. Another limitation of conventional antibody therapies is that they have limited efficacy against solid tumours as a monotherapy.

Today, antibodies are therefore typically used in combination with cytotoxic chemotherapy regimens. Such combinations have made a significant contribution to diseasefree survival as well as overall survival. Chemotherapy may, in fact, aid antibodies in their tumour penetration and immunological performance. Conversely, antibodies may support escaped anti-proliferative drugs by hitting temporarily nondividing cancer cells that had escaped the drugs.

There are numerous efforts under way across the industry to enhance the anti-tumour activity of antibodies. Approaches include increasing the natural cytotoxicity of antibodies through modification of the Fc portion for improved recruitment of immune effector cells, and the addition of toxic payloads to antibodies resulting in immunotoxins or radioimmunoconjugates.

Another novel approach is the development of Tcell- engaging antibodies designed to harness the most potent killer cells in the human body – a feat conventional and modified antibodies cannot accomplish. One particular design is used for BiTE antibodies. The first representative of this class has now achieved clinical proof-of-concept in the treatment of late-stage cancer patients.

Therapies recruiting T-cells have the promise to be active against residual cancer stem cells that are left after standard therapies and are considered the seeds of largely incurable metastatic disease. This article explores the current state in antibody-based cancer therapies and provides an overview of promising new developments in the field.

There are currently three paths for the future development of antibody-based therapies. One is a quest to develop novel antibodies for treatment of many more cancers. Because antibodies need to bind to a target antigen that is specifically and frequently expressed by cancer cells, this path will be driven by the discovery and validation of novel antibody targets.

A second strategy is to refine and optimise combination treatments with antibodies by taking a multi-modal and multi-targeted approach. The third path is to make existing and future conventional antibodies much more potent in eradicating cancer cells on their own. Feasibility of this approach has been demonstrated by two classes of marketed antibody products.

One is Zevalin (Cell Therapeutics, Inc) and Bexxar (GlaxoSmithKline), two antibodies that deliver a radioactive isotope to cancer cells in late-stage Bcell lymphoma patients. The other therapy is Mylotarg (Wyeth), an antibody delivering a highly toxic compound to cancer cells for the treatment of acute myelogenous leukaemia in elderly patients. Several biotech companies offer platform technologies for the conjugation of antibodies with toxins and many clinical trials with such immunotoxins are ongoing.

While Avastin sequesters VEGF – a soluble factor needed by growing tumours to attract new blood vessels – Rituxan, Herceptin and Erbitux as well as followers are thought to act, at least in part, by recruiting immune effector cells through their Fc portion, which in all these antibodies is identical.

A number of biotech companies have specialised in improving this immunological activity of antibodies, referred to as antibody-dependent cellular cytotoxicity (ADCC), by either the modification of carbohydrate structures or the introduction of mutations in the Fc portion of antibodies. Both approaches increase the affinity of antibodies to those receptors by which immune effector cells can recognise tumour cells labelled with the therapeutic antibody.

The additional binding strength was shown in experimental models to lead to a more efficient lysis of tumour cells by the recruited immune cells, which encompass natural killer cells, granulocytes, macrophages or neutrophils. An upside of bolstering ADCC is that no kind of toxic payload is required, which notoriously is a toxic burden to the organism.

Rather, the immune system is more optimally leveraged with the promise of better tolerability. Clinical trials will show whether ‘tuning’ of the antibodies’ Fc portion results in the desired improvement of anti-tumour activity vis-à-vis that of the parental, non-modified antibodies. Various approaches of increasing the efficacy of antibody-based therapies are depicted in Figure 1. 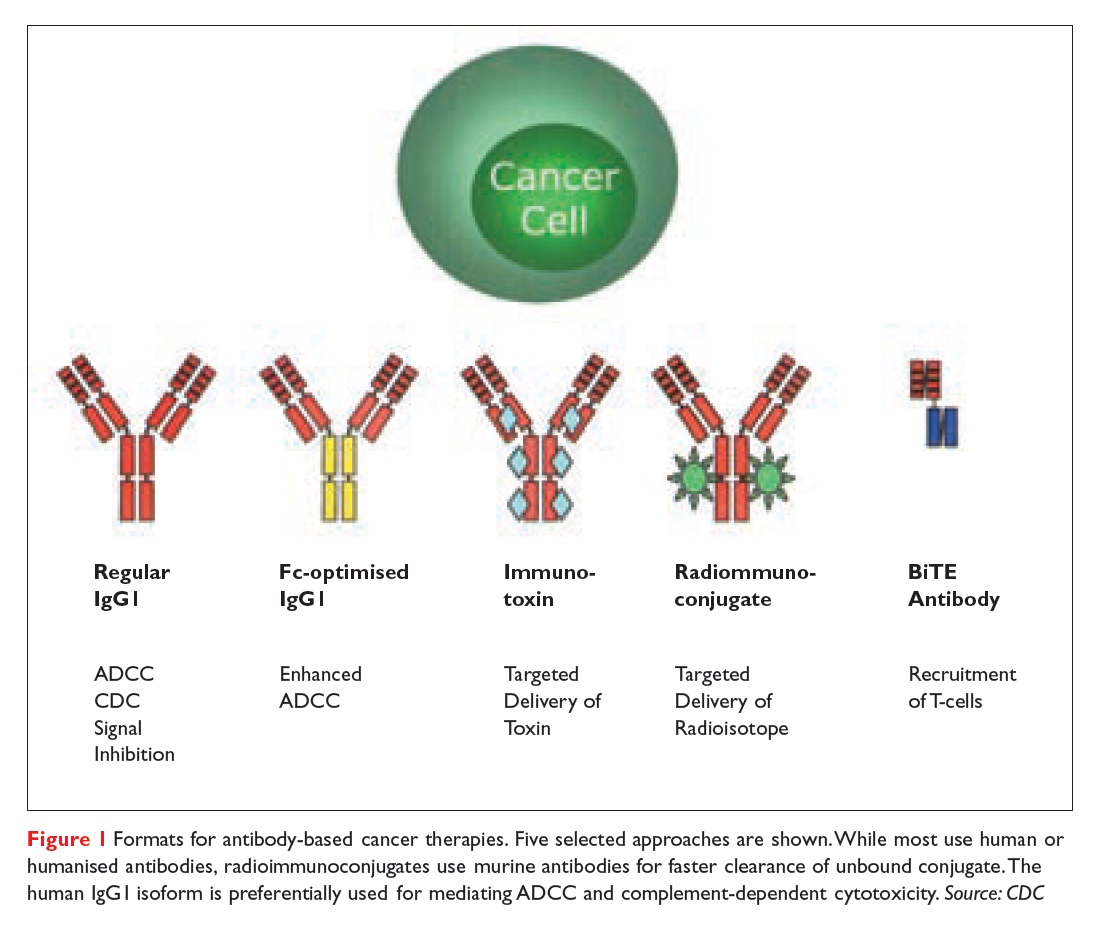 There is one population of highly potent immune cells in our body that conventional antibodies cannot recruit because these cells lack the receptors for binding antibodies: T-cells, which are regarded as the most efficient killer cells known. Mostly engaged in fighting viral diseases, many studies highlight the potential of T-cells to also control tumour growth and impact survival of cancer patients.

A recent study analysed the occurrence of T-cells found inside tumours of colon cancer patients (1). Intriguingly, those patients with very few T-cells in their tumours had a significantly shorter survival than those patients with higher numbers of T-cells in their tumours. This corroborated many earlier studies, mainly from animal models, suggesting that T-cells can control tumour growth, a phenomena called immune surveillance or editing.

Further support comes from the laboratory of Dr Steven Rosenberg at the National Cancer Institute. Rosenberg’s team has spent years trying to turn a patient’s T-cells into a novel kind of cancer therapy. To this end, T-cells are being isolated from tumour tissue of a patient with melanoma, propagated ex vivo to very large numbers using growth factors, and then returned to the patient who has been prepared for this ‘adoptive T-cell transfer’ by a short chemotherapy cycle depleting inhibitory regulatory T- cells and immune cells competing with T-cells for growth factors.

In some cases, partial and complete tumour responses were observed in late-stage melanoma patients by this approach (2). This provided proof-of-concept that T-cells can penetrate large tumours and effectively eradicate tumour tissue. Likewise, the Rosenberg group showed that T-cells can be engineered by gene therapy to recognise just one kind of tumour antigen. By this approach, also partial responses could be observed in late-stage skin cancer patients (3).

However, therapies promoting specific T-cell responses against tumour cells also face limitations. Only very few cancers, mainly skin and renal cancer, have thus far been treated with some success, and a large proportion of patients simply does not respond to a therapy with their own Tcells.

Moreover, tumour cells can secrete the immune systems’ own inhibitory factors that normally balance and limit immune reactions. In fact, if Tcells did not gradually lose control over cancer cells in later stages of the disease, we presumably would not know cancer as a deadly disease in the first place and need not develop costly, toxic, and mostly non-curative therapeutics.

Obviously, the challenge of developing the next generation of T-cell-based therapeutics is to redirect T-cells to those cancer cells that have been selected during the course of the disease with efficient immune escape mechanisms. Technically, this seems possible by so-called bi-specific antibodies. By binding to cancer cells with one arm, just like naturally-occurring antibodies, bi-specific antibodies can flag tumour tissue for T-cells. With a second binding arm specific for the CD3 antigen, the Tcell’s most potent signalling protein, any nearby patrolling T-cell can be grabbed and transiently connected with the cancer cell.

If this is done properly, the T-cell will become potently activated upon close contact and discharge its cocktail of deadly toxins into the cancer cell. One particular design of bi-specific antibodies, called BiTE molecules, has been shown in numerous publications to achieve a highly potent mobilisation of T-cells against cancer cells that have acquired immune escape mechanisms (4).

Clinical proof-of-concept has been achieved with BiTE antibody MT103/MEDI-538 in relapsed and therapy-refractory lymphoma patients. Minute doses of the BiTE antibody not only eradicated cancer cells in affected lymph nodes, spleen and blood but also in organs infiltrated with tumour cells such as bone marrow and liver (5).

Another BiTE antibody called MT110 for the treatment of the most frequent solid tumours, including breast, colon, lung, gastric and prostate cancers, is just entering clinical trials. MT110 recognises EpCAM (CD326), a very frequently and highly expressed tumour-associated antigen that cancer cells apparently depend upon for growth and invasiveness. EpCAM is also found expressed on cancer stem cells.

T-cells are highly motile and constantly roam organs while scanning cell surfaces in search of pathogenic cells. This property and the capability to eliminate non-dividing cancer cells make Tcells ideal for finding and taking out residual cancer cells that are frequently left after treatment of patients with standard therapies.

The presence of residual cancer cells, also called micrometastasis or minimal residual disease, pose a high risk to patients of metastatic relapse. Metastatic disease is the major cause of death from cancer and the reason why most cancers to date are incurable. The typical course of a malignant disease is depicted in Figure 2. Only when the number of tumour cells can be reduced to very low numbers, is a cure possible. 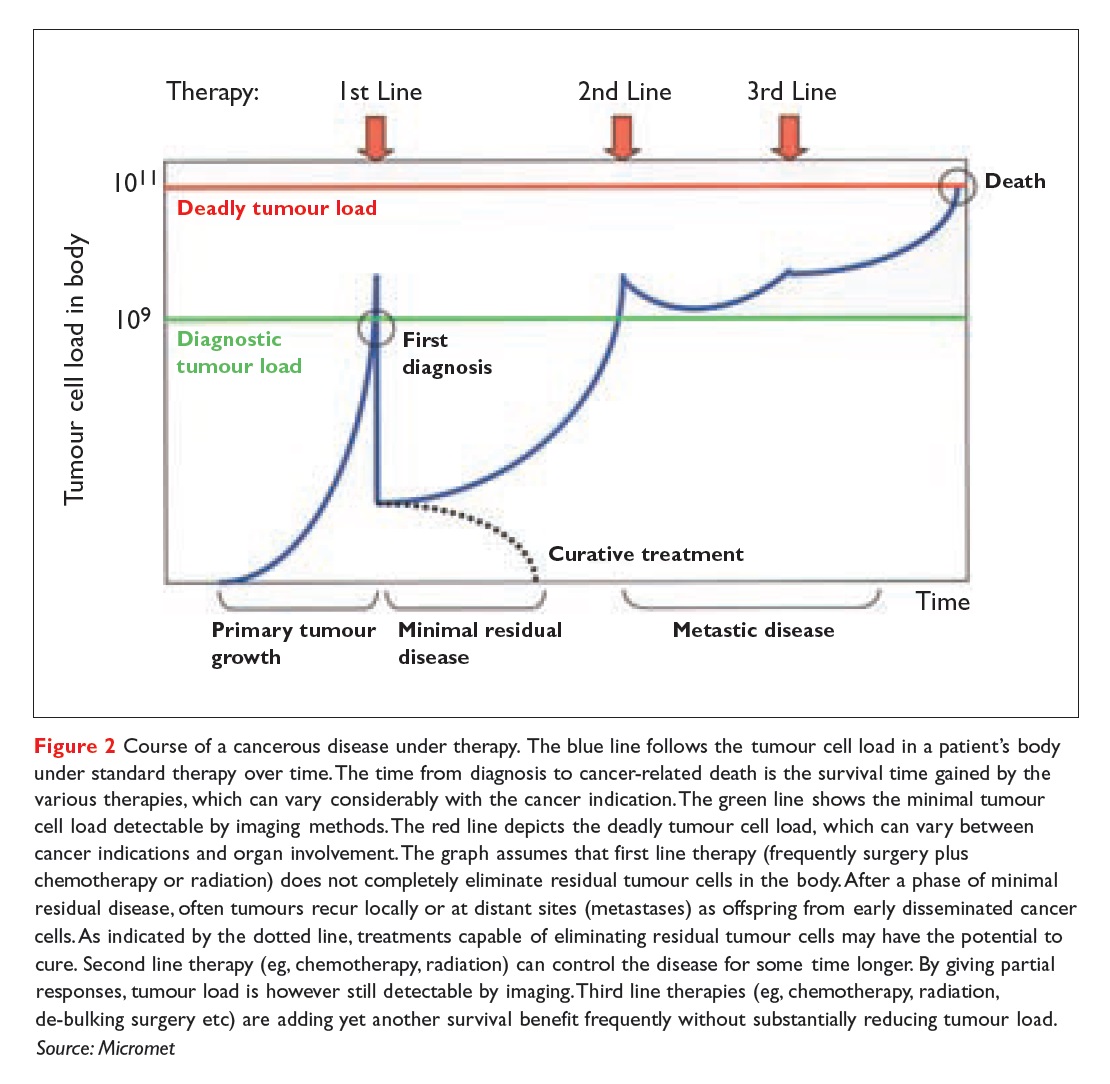 Cancer stem cells have been identified as possible culprits driving metastasis and making this disease stage particularly resistant to current therapies (6). Although being a minor fraction of cells in a tumour, just a single cancer stem cell isolated from a human tumour has been shown to be capable of generating a new tumour when put into a mouse. Most other cancer cells in a tumour cannot do this trick.

Recent studies suggested that cancer stem cells are even enriched under certain chemotherapies because they divide less frequently and are more resistant to such drugs than their proliferating progeny (7). Provided proper target antigens can be identified on cancer stem cells, immune cells redirected through the next generation of antibody- based therapeutics appear well-suited to tackle metastasis at its root cause, with the promise of cure.

In summary, the key challenges for the development of new therapeutic antibodies are to safely enhance their potency for improved treatment of localised disease and, at the same time, for elimination of tumour cells that have spread throughout the body where they form the seeds of future metastatic disease. Only when both challenges are met will we see significant improvements for cancer patients.

T-cell-recruiting antibodies with their dual activity– an outstanding potency of tackling both localised and minimal residual disease, and a builtin search and destroy mechanism – appear well positioned to make a significant contribution to future antibody therapies for cancer. DDW

Dr Patrick A. Baeuerle is Professor for Immunology, Senior Vice President and Chief Scientific Officer at Micromet AG. He holds a PhD in biology from Munich University, and did postdoctoral research at the MIT. Dr Baeuerle is Germany’s most frequently cited biomedical scientist of the past decade, and 38th worldwide.