Unrealised wealth in the avalanche of science 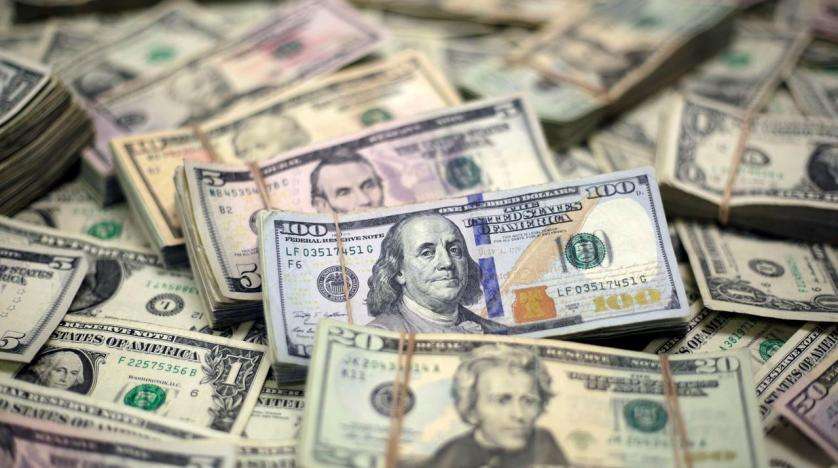 Unrealised wealth in the avalanche of science

The human genome information complemented with high throughput screening, proteomics and molecular structure analysis has significantly increased the speed at which potential drug leads are identified.

The Pandora’s box of intellectual properties opened as a result is beyond any one company’s capability to fully develop. Given the escalating cost of pharmaceutical R&D, increased productivity and return from pharmaceutical assets is critical. A key success factor for any company in life sciences is to balance internal drug development effort with active licensing activities to fully derive value of drug leads generated as a result of the avalanche of science.

In the past decade, advances in information technology have brought powerful computational capabilities to the life sciences.

The ability to store and manipulate very large data sets has allowed rapid advances in multiple scientific disciplines. Convergence of computational biology, chemistry, robotics and large scale computing capability has resulted in an avalanche of science and a dramatic increase in the number of new drug targets and compounds for the pharmaceutical industry. More than 280 products are now in pivotal clinical trials and many promising new products are likely to emerge (Figure 1). 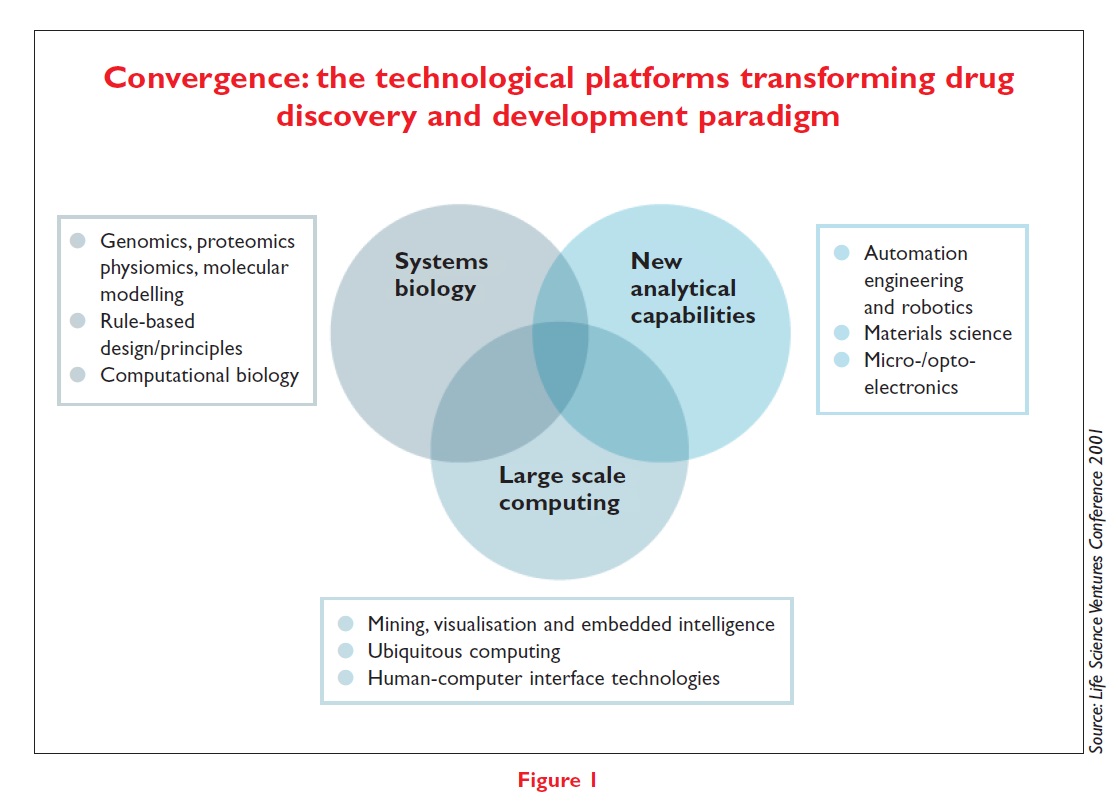 The avalanche of science creates a potential value building opportunity, only if the science-business intersection can be harnessed to form the appropriate relationships to leverage the numerous products, targets and technologies that will be developed. The pharmaceutical industry begins the 21st century witnessing the completion of a draft blue print of the human genome. While the process of annotating the 30,000-40,000 genes is ongoing, both pharmaceutical and biotechnology companies are applying cutting- edge technologies to mine the human genetic information and to identify the gene products–proteins, with which drugs can interact.

In contrast to 30,000 genes, more than one million proteins may eventually be found (1). The pharmaceutical industry projects that genomics-derived targets will constitute more than 60% of all drug targets pursued by the industry in 2002. Compared to 500 drug targets on which all current drugs work, the number of new drug targets discovered through worldwide genomic efforts is estimated to reach 10,000 by the end of this decade. This avalanche of science will continue in the post genome era adding many more new drug targets and potential blockbuster products to the pipeline of the pharmaceutical industry.

Genomics is transforming the drug discovery and development paradigm. The use of advanced tools to mine the human genome will speed up the process of drug discovery and make great pipeline advances. However, the choices of technologies are many and the entry cost is quite high. For example, whereas gene sequencing involves a single technology, to analyse the function of proteins, their amino acid compositions, three-dimensional structures and protein to protein interactions can conceivably involve two dozen different technologies. The myriad of technologies needed to advance genes to drugs is costly, not without risk and will further add to the escalating cost of pharmaceutical R&D (Figure 2). 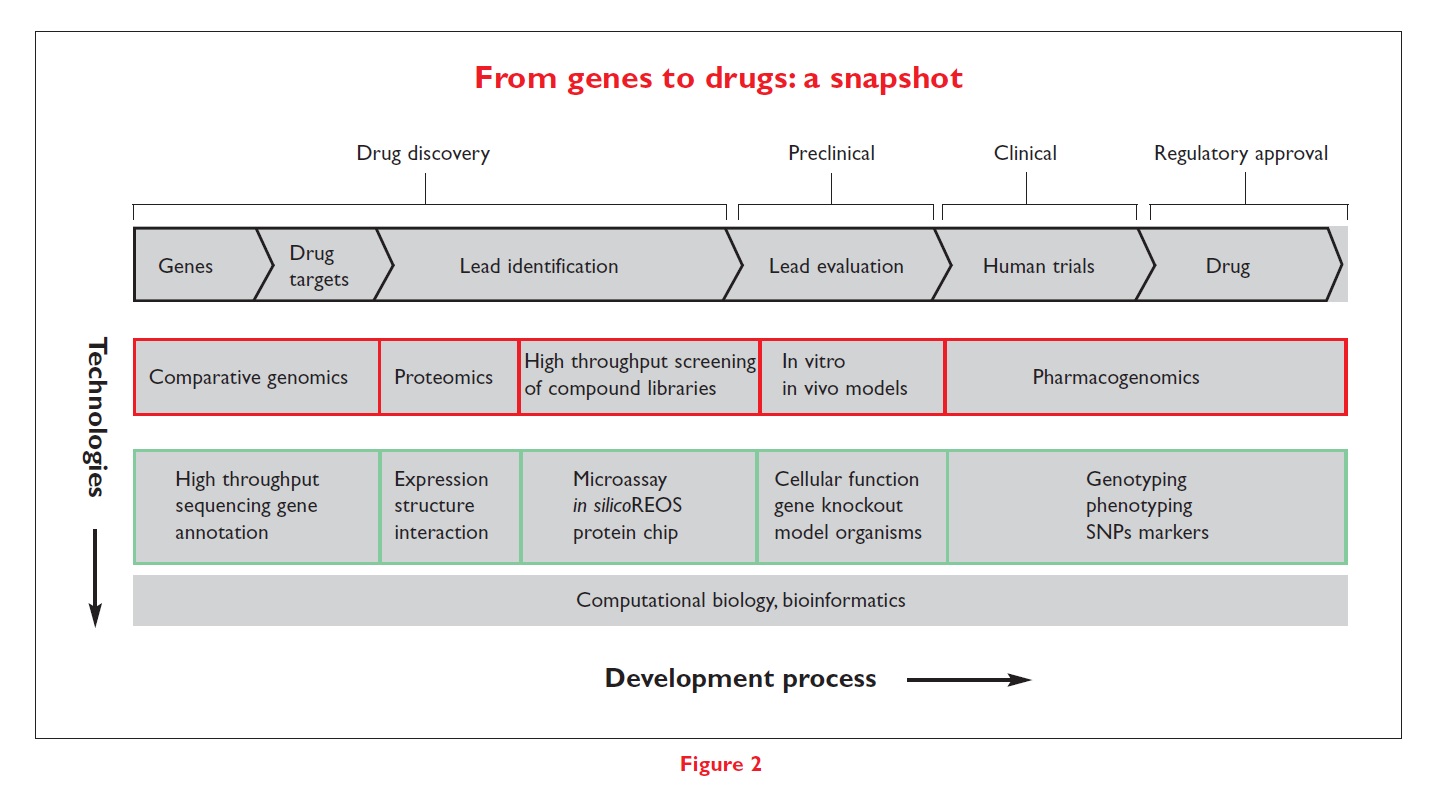 The cost of bringing a new drug to market, including product failures, is already in excess of $500 million. The Pharmaceutical Research and Manufacturers of America estimates that the industry spent $30 billion on R&D in 2000 and the cost will continue to grow as pharmaceutical research become more scientific and rational (2). Also contributing to the high cost is the fact that drug developers must now be more concerned about drug-todrug interactions.

In the past two years, seven major products have been withdrawn from the market because of drug-drug interactions. Together with the large number of drugs with more than $20 billion US going off patent in the next four years (Glucophage, Mevacor, Neurontin, Prilosec, Prozac, Vasotec, Zestril), drug companies are increasingly under pressure to reduce time to drug discovery and, at the same time, the R&D costs.

A recent study by the Tufts centre for the study of drug development reported that despite a significant drop (>60%) in the time to regulatory approval, clinical development times have increased from 56 months in the 1980s to 73 months in the 1990s. The net result is that it takes 12 to 15 years to develop a new drug and bring it to market. Major pharmaceutical and biotechnology companies must improve efficiencies and cut the time it takes to develop pharmaceuticals in order to remain competitive (3). Collaborative strategic alliances are an attractive and cost-effective means to extend a company’s enabling toolbox capabilities and to share risk.

drug targets which no one company can fully explore and develop their inventions. Collectively, five genomic companies (Incyte genomics, Human Genome Sciences, Celera Genomics, Hyseq and Millennium) have filed more than 20,000 patents on full length genes, with more than 800 patents already issued in the United States (1). On top of the increasing numbers of new patents, pharmaceutical companies have already accumulated a substantial inventory of drug targets and promising compounds that are not being actively developed.

Mergers and acquisitions also bring together portfolios of R&D assets of which a significant portion may be shelved because they fall outside the core business or therapeutic focus. According to data compiled by the patent and licence exchange, well over 90% of current patents lie unused on the shelf (4). Data compiled from the Windhover Information Deal database also showed that the 223 significant life sciences deals completed in 2000 represent less than 10% of the more than 2,000 partnering opportunities presented to the major pharmaceutical companies each year (5).

Strategic alliances, partnerships and technology licensing agreements have been as central to the growth of the life sciences industry as advances in the sciences. The intersection of science and business has reached an unprecedented importance.

Strategic partnering is key to success for the pharmaceutical industry and the number and value of strategic alliance transactions has typically been in an inverse relationship with the health of the capital markets. In 2000, however, strategic alliance deals had a sharp increase (number of deals increased by 31%) while the financial market was healthy (5).

This new trend clearly suggest that partnering is no longer primarily driven by the need for economic resources, but about the need for collaborative approaches to build capability, to build clout and to capture value. The audience for partnering has also changed dramatically in the past 18 months. While large pharmaceutical companies remain as the largest component of the in-licensing audience. The large biotechnology companies have become better financed, more experienced in clinical development and poised to capture value from the avalanche science, as reflected by the major growth in their deal output.

Overhaul of the partnering machinery

Partnering between biotechnology and pharmaceutical companies has grown to a $6 billion per year industry. However, the current partnering process remains laborious, inefficient and many R&D assets including promising leads to diagnostics, treatments and cures for diseases, remain shelved and the wealth unrealized!

Three key new factors are driving the need for more effective ways to accomplish the strategic goals of both in-licensor and out-licensor of products and technologies:

1) The avalanche of scientific successes created an enormous number of partnering opportunities. The requirement to find and evaluate this multitude of opportunities has exacerbated the already stretched partnering organisation

3) The traditional sequential method of partnering is proving to be time consuming and unable to reach a broad audience for creative partnering alternative (Figure 3). 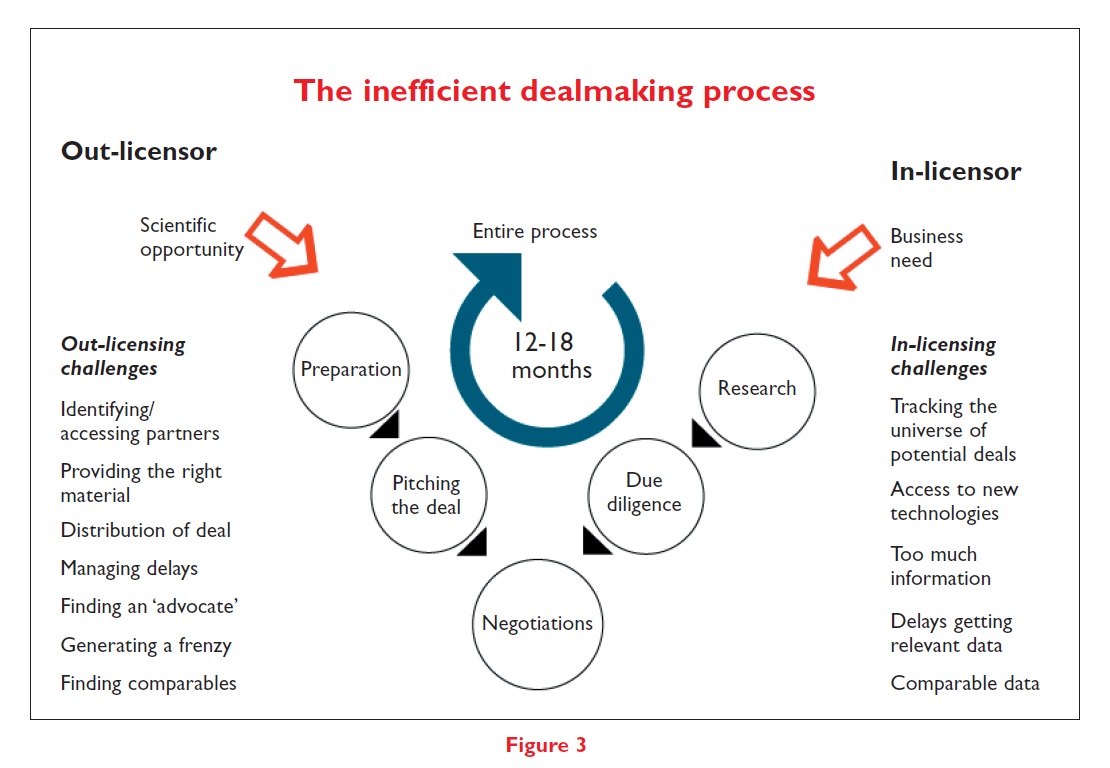 There were early attempts by technology transfer companies to utilise electronic forums to link prospective buyers and sellers of inventions, some have also integrated valuation into the standard process to help solidify trading4. Life sciences opportunities, however, are often scientifically complex and the evaluation and due diligence process is often the choke point of the outdated partnering organisation. An electronic bulletin board of a large number of partnering opportunities that are not quality reviewed, presented with insufficient scientific depth and without an established format may in fact add to the congestion at the partnering bottleneck.

Partnering is about science, speed, distribution and promotion. With a sustained rate of more than 200 R&D partnering deals each year, industry standards such as the DealXchange6 has been developed through the collaborative effort of major inlicensors for the efficient exchange of scientific information, and the strategically evaluation of multiple opportunities.

Supported by sophisticated information and communication technologies, such as the Internet, products like the DealXchange can broadly promote and distribute a wide spectrum of opportunities in front of a broad audience of potential in-licensors in an accelerated time line. Furthermore, industry standard format allows companies to present information that is needed to properly evaluate the partnering opportunity and to allow in-licensors and out-licensors to have comprehensive understanding of each other’s need.

The avalanche of science has created a plethora of partnerable assets and innovative novel approaches are being developed to overhaul the current antiquated, overstretched partnering organisation. Once broadly adopted and implemented, the new and efficient partnering process will promote a smooth intersection of science and business. Pharmaceutical industry executives will be further empowered to form creative strategic alliances as well as the partnering of technologies and products resulted from the avalanche of science, and untapped R&D assets to a broad global audience. DDW

This article originally featured in the DDW Summer 2001 Issue

Dr Benjamin P. Chen has more than 10 years of experience with start-up biotechnology and large pharmaceutical companies, both as a R&D scientist and a member of the senior management team. He has built talented scientific teams and has led programmes in Immunology, Gene Therapy, Gene Discovery, Virology and Cell Biology at Roche, Sentinel Biosciences and Systemix (a Novartis company) collectively. He is currently the Chief Scientific Officer at Biostreet, Inc.

4 Getting a grip on intangibles. Ibid.