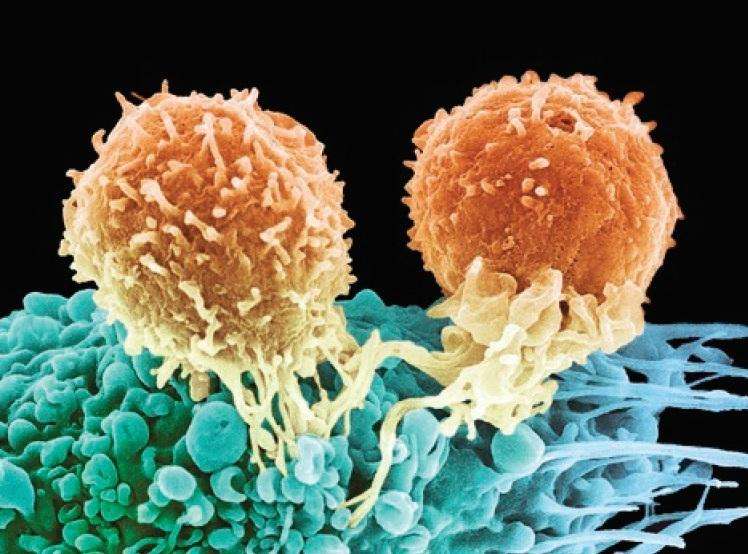 By Dr Catherine A. Brady

The effort to develop drugs that interact with the human immune system (whether by accident or design) has been dogged by a mismatch between the data derived from animal models (mice in particular) and that found in man.

Although the mouse provides the most common model for many aspects of the human immune system, the 65 million years of divergence has introduced significant differences between these species, which can and has impeded the reliable transition of pre-clinical mouse data to the clinic.

The industry is littered with examples of delays, reiterations or even abandoned drug programmes arising from poor translation of animal responses to man.

This article highlights some of the species differences and forwards the rationale to utilise high-resolution human immune cell assays to improve the successful transition from pre-clinical project to proof-of-concept in clinical trial.

The mouse has become the model of choice for a number of medical research areas including the development of therapeutic strategies to combat dysfunction of the immune system. Despite considerable similarity, significant differences are clearly apparent.

This is perhaps not surprising given the considerable period of time since the divergence of the species and the differential evolutionary pressures arising from their respective natural environments, which provide very different challenges from the exposure to different micro-organisms and toxins. Furthermore, among others the obvious physical difference in size (differing over 3,000 times) and life-span (up to 50 times different) have forced further differential adaptations.

While an example of a species mismatch relates simply to efficacy – where mammalian models have demonstrated a robust therapeutic response, which either fails to manifest in man or the nature of the human immune response differs markedly from the pertinent animal models – it is not uncommon for the nature of responses such as the cytokine release profiles, cellular or hormonal responses to be markedly different.

As our knowledge of the immune systems in the respective species increases, cellular and molecular differences (Table 1) forward some candidate mechanisms responsible for these differences; although it is safe to say that the current huge lack of understanding concerning the physiology, pharmacology and pathology of the immune system means that it will be some considerable time before the impact of drugs, either small molecule or biological, upon the human immune system can be predicted with confidence following study only in animal models. 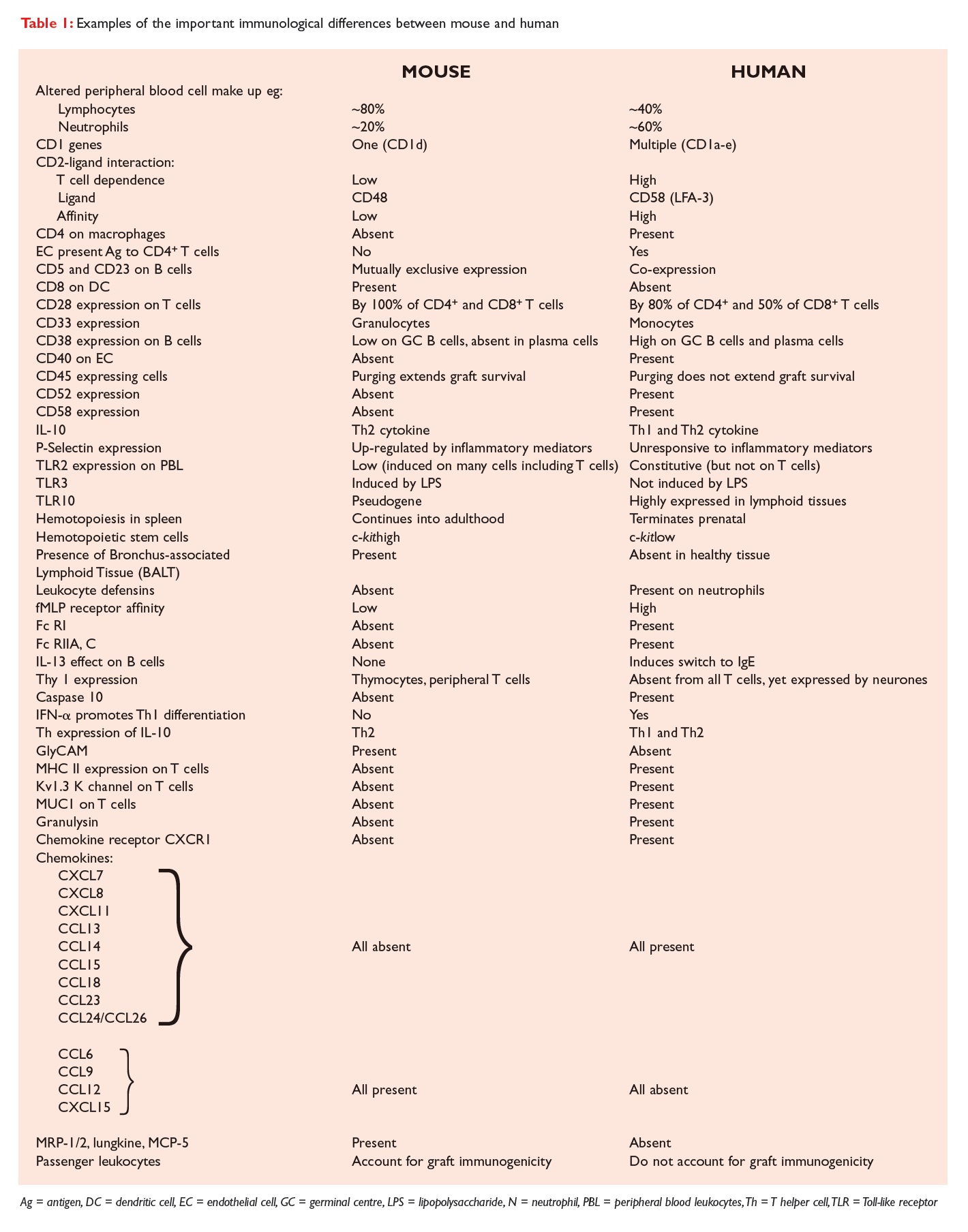 A mismatch between the relevant or accepted preferred animal models for disease and the responses found in Phase I trials is a considerable source of concern for the industry as it is a major point at which programmes can be abandoned or subject to risky delays, which has a significant impact upon R&D costs.

It is perceived by many as a serious risk that can be off-putting for investors and for potential licensees alike – a risk carried by all drugs that intentionally interact with the human immune system as their primary mode of action, those that have a beneficial or altered effect as a secondary feature or those that simply have an unintentional immunomodulatory action that can lead to unexpected toxicity issues.

For example, candidate drugs, which in mouse can appear clean yet when introduced to the human immune system evokes undesirable responses ranging from raised pro-inflammatory cytokine release profiles to the extreme triggering of a cytokine storm as witnessed at Northwick Park Hospital, UK in 2006. The latter was evoked by the biological CD28 super-agonist TGN1412, which had displayed a desirable activity profile in animal models, including primates, which subsequently proved not to be predictive of the human immune response upon the devastating first administration to man.

So, while the immune system can prove to be a highly effective means of effecting treatment, the potentially poor translation from mouse to man provides a major barrier and hindrance to those pursuing immunomodulatory drugs of all types. Attempts are commonly made to mitigate this risk by conducting in vitro experiments using human cells, the most commonplace being Peripheral Blood Mononuclear Cell (PBMC) cultures and mixed Lymphocyte Cultures (MLC); both of which use human white blood cells to provide rudimentary insights into how the human immune system will respond to drug candidates.

However, these are relatively crude methods, which have a relatively poor level of resolution and can show high variability in response. Furthermore, some of the critical cell components (immune-cell subtypes) are present in such low concentrations in these preparations that their responses can be diluted and therefore missed in vitro, whereas in vivo their response and effect is profound. 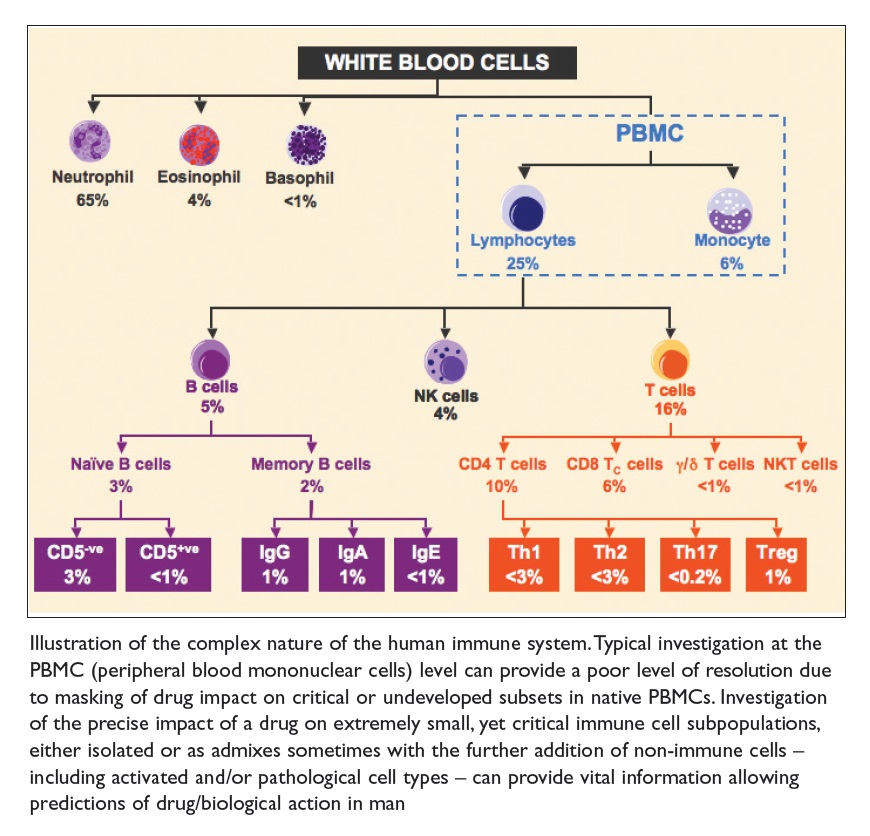 Researchers at the World-leading MRC Centre for Immune Regulation at Birmingham University Medical School in the UK have built considerable knowledge and expertise in understanding the intricate mechanisms of the human immune response.

Led by Professor John Gordon, his group have developed an array of assays using human immune cells, which can be used to understand and predict how the human immune system might respond to a variety of agents including small molecule drug candidates or biological drug entities. Key to these assays is the ability to study defined subsets of human immune cells (purified using ‘no touch’ technologies) either alone or as reconstituted admixes. 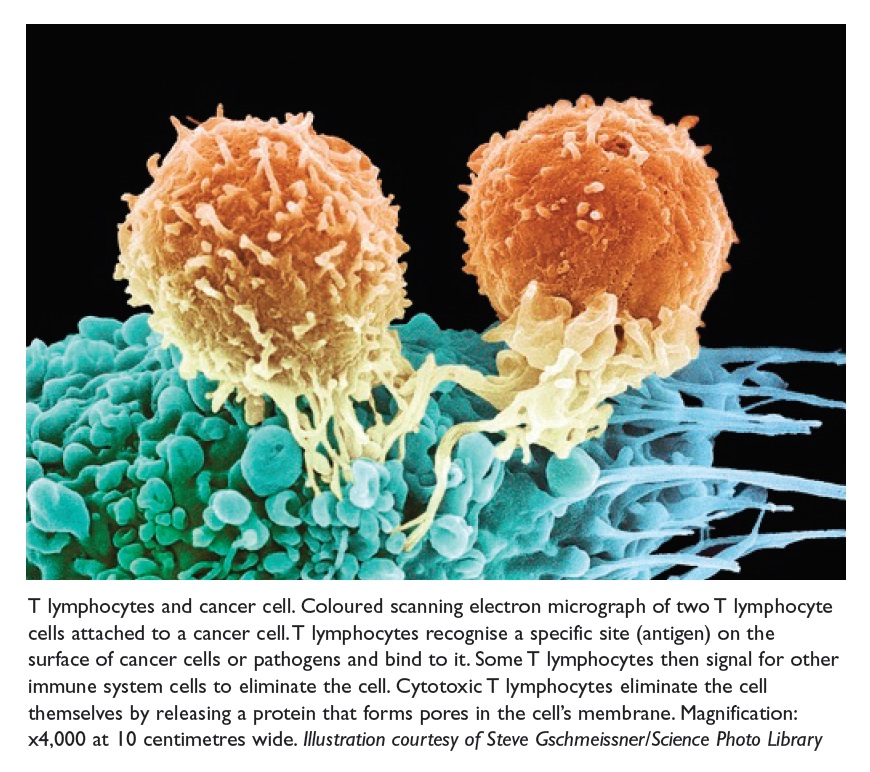 Professor Gordon has gained international recognition for his research of B lymphocytes and the cancers that can arise from these cells, namely various leukaemias and lymphomas, and he is recognised as one of the World’s most highly cited researchers (https://hcr.clarivate.com/).

“The immune system is complex, yet if harnessed effectively it has the potential to provide some of the most effective responses to many diseases including cancers, infections, inflammatory diseases and autoimmune diseases. Different drugs act on different parts of the immune system including some very specific cell types, the effects of which may be difficult to detect and sometimes undetectable in the most commonly used PBMC and MLC-type assays. Furthermore, assaying responses in single cell types is not often sufficient and one has to also consider the different responses and interactions between mature cells and those in the process of maturing.

“There is an increasingly wide array of drug molecules being developed as potential immunomodulators (including antibodies, cytokines, nucleic acid-type drugs, therapeutic proteins, immunostimulatory carbohydrates and lipids), the list is long and still growing. In each case, even with high resolution assays such as those that we use here in Birmingham, it is necessary to assess what is known about the mode of action of the drug from animal studies, judge the likely effects in man and then from this design assays that are most likely to give meaningful predictive information that is of relevance. It is not just a case of running a few standard screens – it relies on a more intelligent and considered approach. Further, in using fresh human cells we have the ability to also consider donor (patient) variability of response as cells from just a few individuals can be highly misleading.”

Professor Gordon’s team have assessed a number of drugs over recent years and have refined their approach to customised screening for drugs and drug candidates. Three major questions arise when developing any drug that interacts with the human immune system. Firstly there is the question as to whether the drug will show a similar or sufficient efficacy in man and so be a reasonable candidate to develop further.

Since there are marked differences between the mouse and human immune systems (Table 1), any high resolution information that can be gained in vitro with human cells before a decision to progress into man with respect to efficacy and the nature of the response is highly valuable and may help to reduce the number of twists and turns that a drug candidate faces before it successfully transitions into Phase I trials.

Secondly, there is the question of safety; ideal responses profiled in animal models and even simple assay methods using PBMC and MLC preparations can prove to deliver costly red herrings when, in man, we see different types of responses that are significant enough to give concern about a drug candidate’s true potential and can often take us back to the drawing board, or worse abandon a particular approach.

Thirdly, there is the question of mechanism of action (MOA) – both at the cellular and molecular level – a key question in the field of immunology that can make or break the commercial potential for a new class of therapy. In the past MOA was a ‘nice to have’; today it is of increasing importance for regulators, for investors and for the eventual licensees of the drug candidate.

Sadly, this is never an easy question to answer, particularly when trying to reconcile results from animal studies, with human studies and sometimes with chimeric studies. While Professor Gordon’s team do not claim to be able to deliver all of the answers around MOA, the detailed human cell work that they perform can give a significantly improved resolution and often the MOA in man.

In 2005, Professor Gordon founded Celentyx Limited with Professor Nicholas Barnes, a neuropharmacologist at Birmingham University Medical School. Their partnership had been investigating the role of neurotransmitter receptors in the immune system – a new field they termed ‘Neuro-Immuno-Pharmacology’. Professor Barnes is CEO of Celentyx:

“The frequent issues around the difficulties in taking immunological drugs from mouse to man were obvious as were the needs of those organisations attempting to resolve these differences and improve the reliability of the step into Phase I trials. We were getting frequent requests for support and advice on this very topic and so the idea to offer these services on a professional basis was a natural one.”

Now a number of companies, including Celentyx, are working to fill the void between mouse and man by offering services that bring forward human immune cell assays earlier into the preclinical phase of drug development and in so doing de-risk the business of developing drugs that target or interact with the human immune system (Table 2). 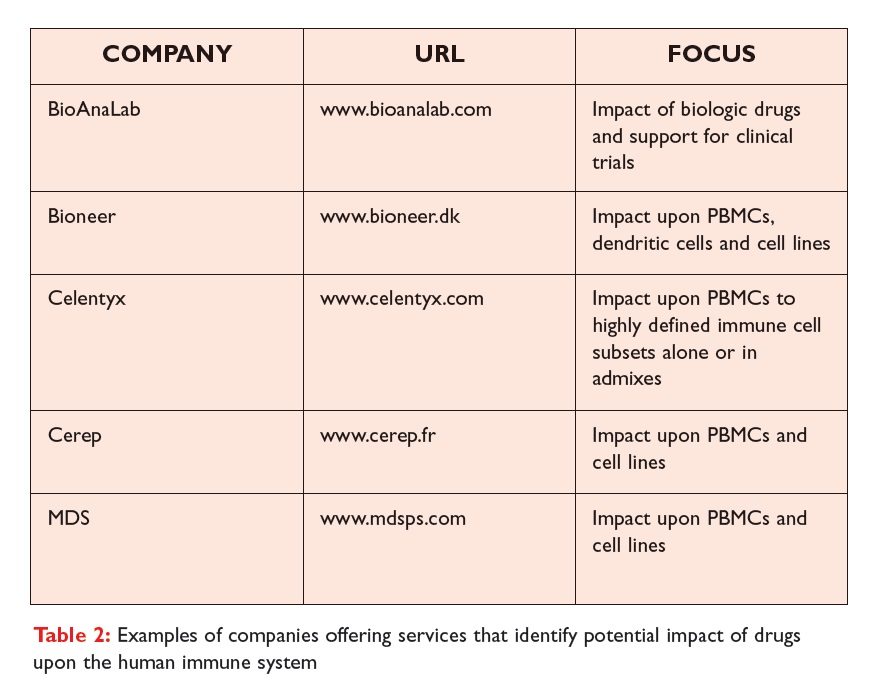 The strategy to better understand the impact of a novel therapeutic upon the human immune system – either good or bad – earlier in the drug development process will logically improve the efficiency to convert preclinical projects to efficacious medicines. A highly desirable situation for all. DDW

This article originally featured in the DDW Winter 2008 Issue

Dr Catherine Brady is the Commercial Manager of Celentyx Ltd and was instrumental in the formation of this spin-out company from the University of Birmingham. Formerly she was Innovation Manager for MidTECH – NHS Innovations, a role that identified and managed intellectual property on behalf of the UK National Health Service, where she was involved in the successful completion of a number of licence agreements. Prior to this, Dr Brady was recipient of a prestigious Medici Fellowship to facilitate the commercialisation of intellectual property arising from academic research. Dr Brady read for a BMedSc (Hons) Pharmacology undergraduate degree at the University of Birmingham before embarking on a PhD funded by BASF Pharma investigating human 5-HT receptors within the Cellular and Molecular Neuropharmacology Research Group.