Nanoparticles & Nanomedicines – Exploring The Past, Present and Future 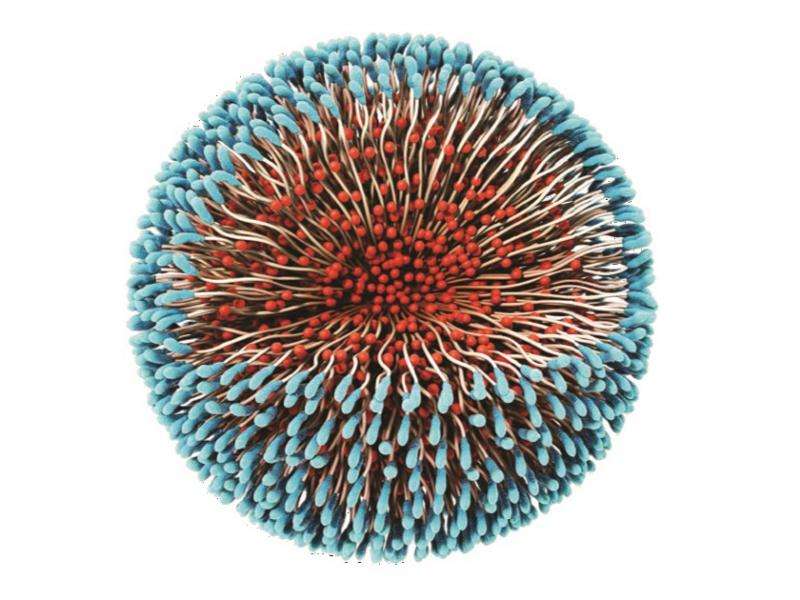 Nanoparticles & Nanomedicines – Exploring The Past, Present and Future

Nanoparticles, and liposomes in particular, are growing in popularity as drug delivery vehicles for anti-cancer agents and inflammatory disease therapies, as well as forming the basis of a new class of vaccines.

They offer a number of advantages in terms of stability, efficacy and off-target effects, but traditional manufacturing methods are labour-intensive, hard to reproduce and difficult to scale up. This has contributed to a widely-held perception in the pharmaceutical industry that nanomedicines are far from clinically practical.

A new generation of microfluidic systems is helping to overcome these issues, allowing the rapid development and seamless scale-up of novel nanoparticles. This technology is transforming the development and manufacture of a range of nanoparticle formulations from a hit-and-miss affair into a standardised process, accelerating novel nanomedicines from the bench to the clinic.

Nanoparticles comprised of polymers or lipids can be used to encapsulate biological or small molecule active pharmaceutical ingredients (APIs) for drug delivery. This approach offers a number of advantages over traditional drug formulations, principally that the API is protected from harsh extracellular environmental conditions in vivo, allowing delivery of the intact API into the target tissues, cells and sub-cellular compartments, while shielding it from chemical or enzymatic degradation. Correspondingly, nanoparticles can be used to prevent highly toxic APIs – such as the cytotoxic agents used in cancer therapies – from causing off-target unwanted side-effects.

Packaging the API within nanoparticles not only shields the drug from the body, or vice versa, it also effectively decouples the relationship between drug structure and biological targeting. By ‘hiding’ the drug in the nanoparticle, its properties are masked from biological processes which dictate its in vivo localisation. Varying the physical properties or chemical structure of the nanoparticles, therefore, allows more effective targeting without compromising API structure or function.

A number of potential in vivo targeting strategies have been suggested, including coupling the particles to antibodies or other biologically-derived recognition elements, but the majority of nanomedicines currently in development rely on adjusting the physicochemical properties of the particles themselves. Liposomes – spheres composed of phospholipid bilayers which are used to encapsulate drugs – are the forerunners in the nanomedicine arena, with the first FDA-approved example, Doxil®, first appearing in 1995.

A major benefit of liposomes as drug delivery vehicles is that their properties are almost completely independent of the API they are being used to transport; they can be made to a range of sizes or magnitudes of charge, and used with hydrophobic or hydrophilic payloads, helping to overcome the solubility issues associated with the former.

At scales relevant to clinical and commercial production, liposomes are generally formed by nanoprecipitation, followed by multiple extrusion or homogenisation steps to refine size. With nanoprecipitation, lipid components are dissolved in a water-miscible solvent, then mixed with an aqueous buffer. The resulting changes in the polarity cause the nanoparticle components to self-assemble.

This turbulent mixing approach is difficult to control and challenging to reproduce precisely, as a wide range of parameters – including the mixing mechanism, temperature, pH, nanoparticle composition and shear forces – affect the self-assembly process. Further processing steps, such as sonication, homogenisation or membrane extrusion, are therefore required to ensure consistent sizing across the particle population.

These additional processing steps are labour-intensive, suffer from poor batch-to-batch reproducibility and are difficult to scale. This not only affects the efficacy of liposomes as drug delivery vehicles – particle size has a significant impact on biodistribution – but it also makes it difficult to compare results, establish trends or apply rational design principles during development. Researchers developing liposomal drug delivery vehicles therefore all face the same challenges: developing a potent formulation, meeting the reproducibility criteria of regulatory authorities and achieving reliable scale-up for further testing.

These issues have significantly impeded progress in this promising area of drug formulation, as many pharmaceutical developers are tentative in their nanomedicine approaches due to a lack of in-house expertise, a poor track record of success and a perceived risk en route to market. This has created a clear demand for rapid, flexible and controlled mixing processes, enabling consistent nanomedicine production that meets the joint pressures of short development timelines and ever-increasing regulatory considerations. 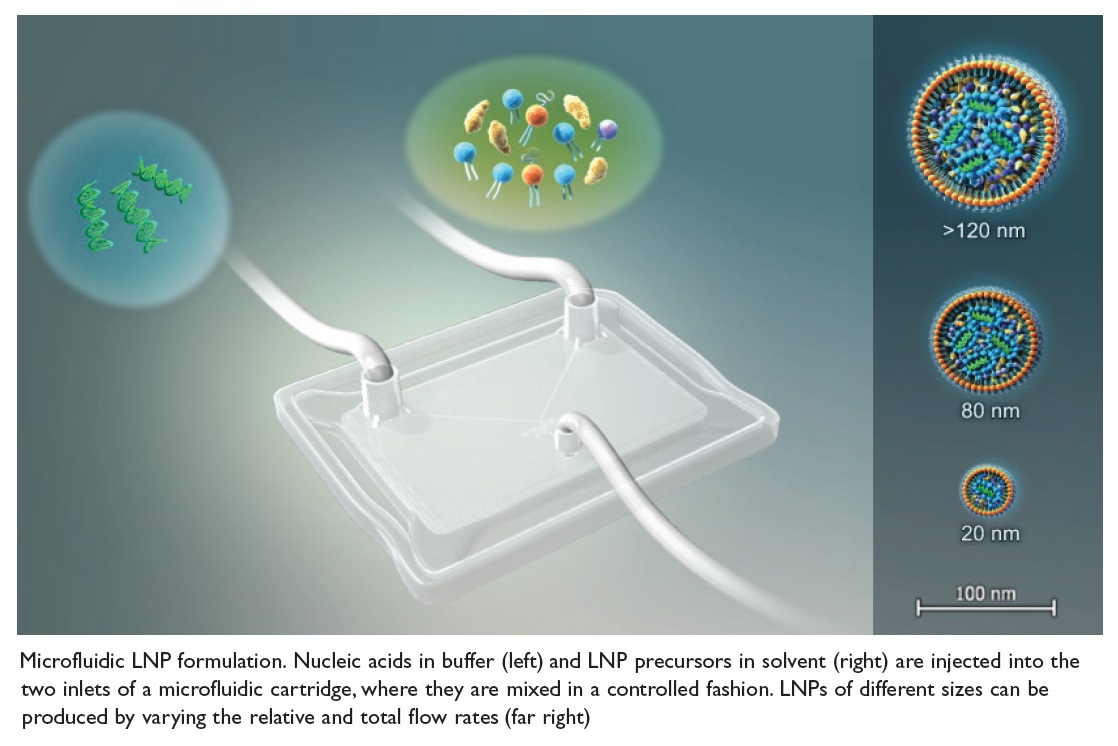 Laminar flow microfluidics is now emerging as the potential solution to these challenges. Under laminar flow, two fluid streams entering a microfluidic channel appear as separate adjacent streams, despite being miscible, before slowly diffusing together. This process is both reproducible and well-controlled, however, rapid mixing is crucial to achieving small, uniform particles.

There are two microfluidic designs in particular that promote rapid mixing and are already commonly used in nanomedicine formulation: hydrodynamic flow focusing and chaotic advection. Flow focusing has been used predominantly to formulate polymeric nanoparticles by entrapping hydrophobic small molecules, although there have also been some examples of its use with nucleic acid formulations.

In contrast, chaotic advection has been broadly adopted, largely because it can achieve higher flow rates (two orders of magnitude greater than flow focusing), and because there are commercially available systems based on this method designed specifically for the development and production of nanomedicines.

‘Readymade’ systems like this remove the burden of instrument and chip design from drug development labs, overcoming the ‘knowledge gap’ traditionally associated with microfluidics and allowing researchers to concentrate their efforts on the development of effective APIs.

No longer a black art

The highly-predictable mixing offered by these systems ensures the rapid, controlled production of a variety of nanoparticles. Optimising the geometry of the microfluidic chips maximises the interface between the fluid phases, allowing precisely controlled mixing in milliseconds in nanolitre reaction volumes. Component mixing occurs faster than nanoparticle self-assembly, preventing sub-optimal mixing and heterogeneous precipitation, and the low energy conditions required are ideal for biologics.

This standardisation of processing allows the production of nanoparticles with carefully defined characteristics, including chemical compositions, concentrations and drug/excipient ratios. Crucially, this approach also provides a clear route to scaling up production, as multiple identical chips can be run in parallel. This allows throughput to be increased to meet the requirements of each phase of the drug development workflow, without changing the reaction conditions.

The flexibility and reproducibility of these automated microfluidics platforms has revolutionised the way researchers are approaching nanoparticle development. By minimising batch-to-batch and operator-to-operator variability, these systems allow accurate assessment of how changes in processing variables – drug and excipient concentrations, flow rates and mixing ratios – affect the structure and composition of the resulting nanoparticles, including average particle diameter, polydispersity (inhomogeneity) and drug encapsulation efficiency.

This reproducibility means it is now possible to use a Design of Experiment (DoE) approach to rapidly assess and define the best parameters for robust manufacturing of any given nanoparticle, then screen lead formulations for the desired biological activity. And, because the final product is available in minutes, instead of several hours using conventional techniques, this helps to accelerate development timelines.

One of the biggest advantages of this approach is that the structure and behaviour of the resulting nanoparticles can be predicted according to the processing parameters and particle composition. Data generated by both the University of Strathclyde and Precision NanoSystems – for liposomes and polymeric particles respectively – illustrates that processing parameters or particle compositions can be fine-tuned to achieve the desired particles, enabling a more structured approach to nanomedicine research.

By mapping out an approximate design space around the key process parameters for any given particle type and formulation, research groups can now quickly and easily screen and optimise their particles, allowing them to concentrate on in vivo drug function instead of particle manufacture. 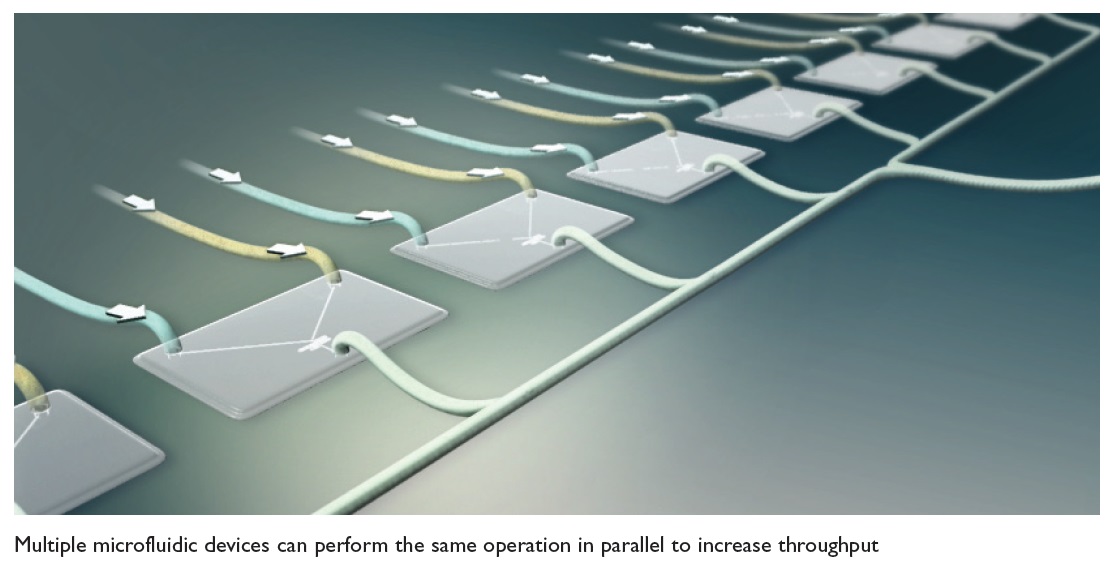 Putting nanomedicines to use

Due to the relative cost of nanomedicine formulations in comparison to simple dosage forms, such as pressed tablets, the areas most likely to benefit from this approach are those where current strategies are either ineffective – due to poor in vivo stability or bioavailability, for example – or where they cause significant off-target effects, such as anti-cancer agents.

Liposome encapsulation of cancer therapeutics is already gaining some traction as this limits off-target cytotoxicity, and the ‘leaky’ vasculature commonly associated with tumours means that nanoparticles below around 100nm passively aggregate in these sites, where they break down and release their payload. 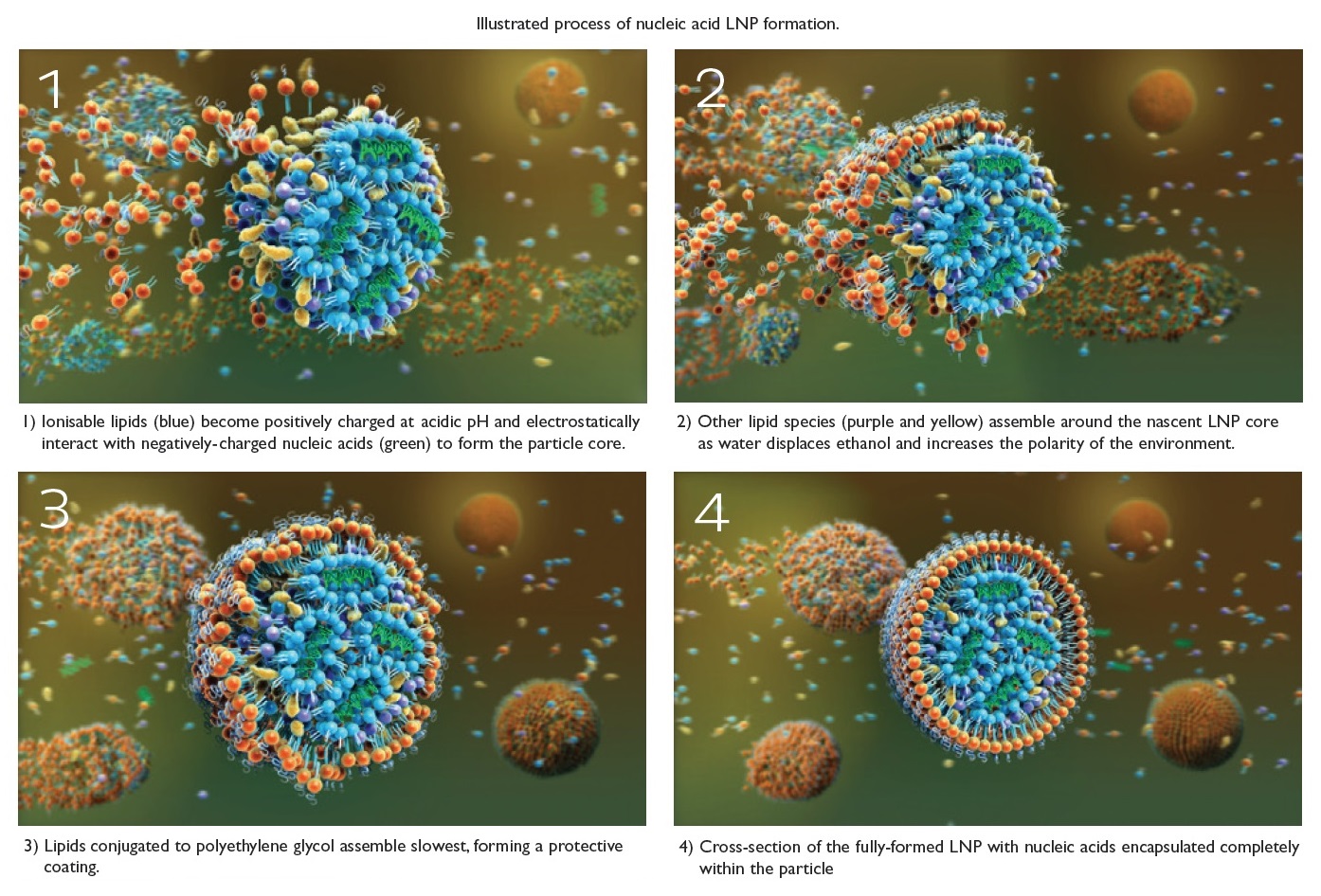 Another strategy currently under investigation is the use of liposomes as carriers for subunit vaccines, in an effort to replace some live attenuated vaccines. For example, the only current tuberculosis (TB) vaccine is the BCG, which is very effective in developed countries, but is less effective in regions such as sub-Saharan Africa where there is high incidence of TB.

This is because the vaccine is ineffective if patients have already been preexposed to the pathogen, and it is not suitable for immunocompromised patients – such as HIV positive individuals – as there is a small risk of the bacteria being reactivated. In contrast, subunit vaccines offer improved safety profiles by not exposing the patient to whole pathogen, attenuated or otherwise.

Designed to present a single antigen – often a single pathogen protein – to the immune system, this avoids many of the issues associated with live attenuated vaccines, but most subunit vaccines suffer from poor efficacy, as they do not generate a strong immune response. By putting these antigen groups on to the surface of liposomes, the immune response can be boosted without compromising the safety of the vaccine.

This approach could also lead to the development of a generic particle which could be used to accelerate the development and manufacture of new subunit vaccines to counter global health crises. For example, during the recent H1N1 influenza outbreak, by the time a vaccine had been produced, the outbreak was already abating. If you project this on to a more significant pandemic, then a vaccine would only be available to innoculate the survivors, which is futile.

If, instead, a generic carrier particle was already available and ready for manufacture, then efforts could concentrate on identifying and producing the correct antigen, speeding up the entire process. While the mutation rate of the HIV virus may present a significant challenge to this strategy, it could be effective against other viruses of international concern – such as Zika – providing a rapid vaccine development platform.

The commercial availability of microfluidic platforms aimed specifically at drug formulation is helping to lower the barriers to nanomedicine research.

Implementation of this technology eliminates the need for in-house microfluidics expertise and extensive process development, helping to accelerate research and development timelines and providing a clear roadmap from early research to end product.

By working with these technologies, researchers can spend their time designing and planning their experiments, solving problems and asking the big questions, rather than making nanoparticles.

This article originally featured in the DDW Fall 2017 Issue

Professor Yvonne Perrie, Strathclyde Institute of Pharmacy and Biomedical Sciences. Professor Perrie’s multi-disciplinary research focuses on the development of drug delivery systems to facilitate the delivery of drugs and vaccines, thus providing practical solutions for current healthcare problems. Following her PhD investigating the role of liposomes for drug delivery, she worked for newly established drug delivery company Lipoxen Technologies Ltd before returning to academia to set up her own research group.