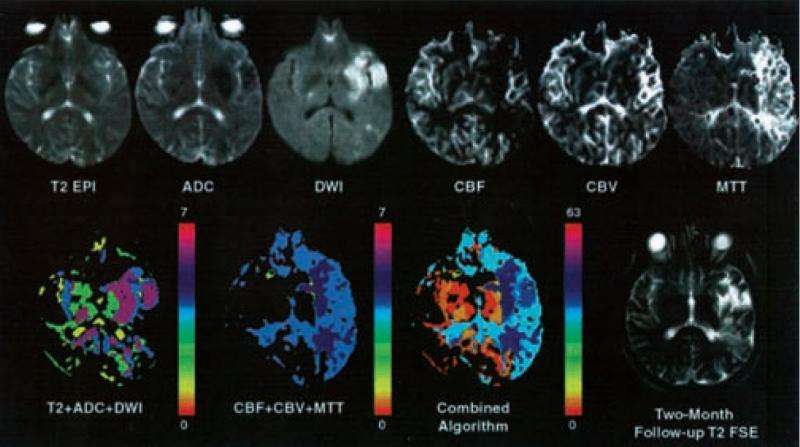 Over the years, the discovery of drugs for treating neurological and psychiatric diseases has proven to be one of the highest risk areas in the pharmaceutical industry.

Despite the huge resources that have been invested in CNS discovery, it remains a fact that a significant number of approvals have been for new formulations, incremental improvements to existing therapies, or the use of known drugs in different clinical settings.

This article assesses why the development of CNS drugs with truly novel mechanisms remains so challenging. It discusses the opportunities provided by the many new technologies available, to accelerate the drug discovery path and deepen our understanding of CNS disease. However, the article also emphasises the need to integrate such new technologies with approaches that have proven useful in the past and in particular with the continual reanalysis of past information.

The need for new medicines for the treatment of neurological and psychiatric diseases is as great today as it was 20 years ago. Over past years, an enormous amount of human effort and money has been injected into this area of drug discovery and, on the surface, we seem to have faired no worse than any other therapeutic area (1). However, of the 14% of drugs that have completed the path to launch, few possess a truly novel mechanism.

Iproniazid, the earliest inhibitor of monoamine oxidase, was developed first as a treatment for tuberculosis and only later was it found to elevate mood (2). The phenothiazines, exemplified by chlorpromazine, started their clinical life as anaesthetic potentiators and only later were they shown to reduce paranoia (3). More recently, we have seen the approval of gabapentin, as an analgesic agent, a milestone that was initiated by clinical findings that certain anticonvulsants could reduce chronic pain (4).

Although this circuitous path of drug discovery is legitimate and indeed a route to be encouraged, it does bypass the need to select a drug target based on preclinical data and highlights the challenges of taking completely novel targets through the entire drug discovery path. It also adds greater credit to CNS-active drugs that were developed rationally based on efficacy in animal models or an understanding of the pathology of disease (eg the benzodiazepines for anxiety states, L-DOPA for Parkinson’s disease).

Unfortunately these are few and far between and if, in the fear of failure, we continue to refine drug molecules based on existing mechanisms, we will undoubtedly find it increasingly difficult to make the breakthroughs the area needs to succeed in bringing truly value medicine to the marketplace. 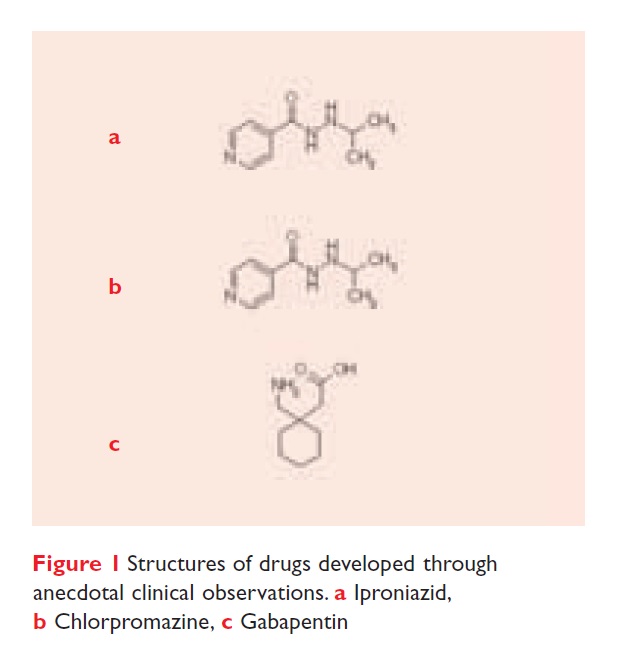 The challenges of target validation

One of the greatest challenges we face in CNS drug discovery is in target validation. CNS diseases are extremely heterogeneous, difficult to diagnose and in many cases, have a poorly understood aetiology and pathology. In psychiatry alone, the Diagnostic and Statistical Manual of Mental Disorders lists more than 300 distinct conditions, most of which can be diagnosed only by the inclusion and exclusion of a range of overlapping symptoms. To be able to accurately select the right target as a key mechanism for a disease state, we need to achieve a greater understanding of the molecular basis of CNS diseases.

In the past, this has proven to be particularly challenging because of their complex symptomatology, difficult diagnosis and the limited accessibility of quality post-mortem tissue for basic exploratory science. Most of the dementing illnesses can only be assigned a ‘probable’ diagnosis until analysis post-mortem. Moreover, the limited predictive value of animal models of CNS disease is also a challenge. Often disease phenotypes cannot be directly mimicked in animals (eg mood, hallucinations) and even where there are correlates (eg sleep, pain, movement), the triggers used to mimic disease are often based on poorly understood mechanisms or existing pharmacology.

What does genetics offer?

Understanding genetic aetiology is a key step forward and it is part of the dream that, eventually, we will know every gene that is linked to every CNS disorder. Concordance studies suggest that most, if not all, neurological and psychiatric diseases have a genetic aetiology. However, complex traits have slowed progress in elucidating many of the associated genes. As of this writing, the OMIM (Online Mendelian Inheritance in Man) database reports almost 3,000 phenotype descriptions, less than 4% of which are relevant to the CNS.

Most of the CNS conditions listed are extremely rare autosomal forms of disease and despite years of collective efforts to identify and replicate linkage, we still remain ignorant of the genes associated with some of the most common forms of unipolar and bipolar depression, anxiety, schizophrenia, multiple sclerosis, migraine and Parkinson’s disease. Some now believe that many of the previously defined single diseases should be considered and genetically studied more as a shared and complex biological condition. Only time will tell whether this approach will be more successful.

Despite slowness in some areas, there have been major genetic breakthroughs in others. For Alzheimer’s disease there are associations of mutations/polymorphisms in four genes; the ßamyloid precursor protein (APP), apolipoprotein E (APOE), presenilin-1 (PS1) and presenilin- 2 (PS2) (5); Biology aimed at understanding the effect of these gene variants, in the context of Alzheimer’s pathology, has proven a useful step in validating targets for this disease. The ßamyloid cleaving enzyme (BACE) is one of the exciting drug targets that have emerged from such activity (6).

Transgenic models expressing mutations of the genes associated with Alzheimer’s disease are now available and are being used, not only to gain a greater understanding of the disease pathology that develops over time, but also to evaluate compounds as potential therapeutics.

Knowledge of the genes associated with autosomal forms of Parkinson’s disease (PARKIN, α- synuclein) (7) and amyolateral sclerosis (SOD1) (8) has also provided some insight into the mechanisms of neurodegeneration in general, and again has lead to the development of better animal models. For epilepsy, there are several autosomal conditions and in these cases, some of the associated genes encode ion channels (eg KCNQ2, KCNQ3, SCN1A), which could themselves be direct targets for drug discovery (9).

Having a better understanding of the pathology of CNS disease is another critical step and studies in this area have been hampered by difficulties in accessing good quality human disease tissue. Epilepsy is one condition where live biopsy tissue can be obtained, most other tissue can generally be obtained only post-mortem, complicating interpretation of any experimentation by variable postmortem delay, treatment effects and non-consequential late-stage pathology.

However, thanks to newer non-invasive imaging methods such as magnetic resonance imaging (MRI) or magnetic resonance spectroscopy (MRS), significant progress is now being made in some areas. Not only is MRI providing the most sensitive non-invasive method for understanding human disease, it is also well placed to assist in the characterisation of animal models. Both these applications are critical for complex, chronic diseases such as those that affect the CNS, and there are already some extremely elegant examples highlighting the power of MRI to assess pathological changes in both human and animals (10).

For schizophrenia, the theory of hypofrontality has developed from work using functional MRI and MRS (11). Clinical and preclinical studies in stroke is probably the best area to highlight the power of different MRI parameters (T2, diffusion-, perfusion-weighted imaging, blood oxygenation level-dependent functional MRI) in revealing the different stages of pathology, to predict the likelihood of functional recovery (12) (see Figure 2 (13) for comparisons of different MRI parameters in a human stroke patient), as well as to understand the parallels between the preclinical animal models and the human condition (10). 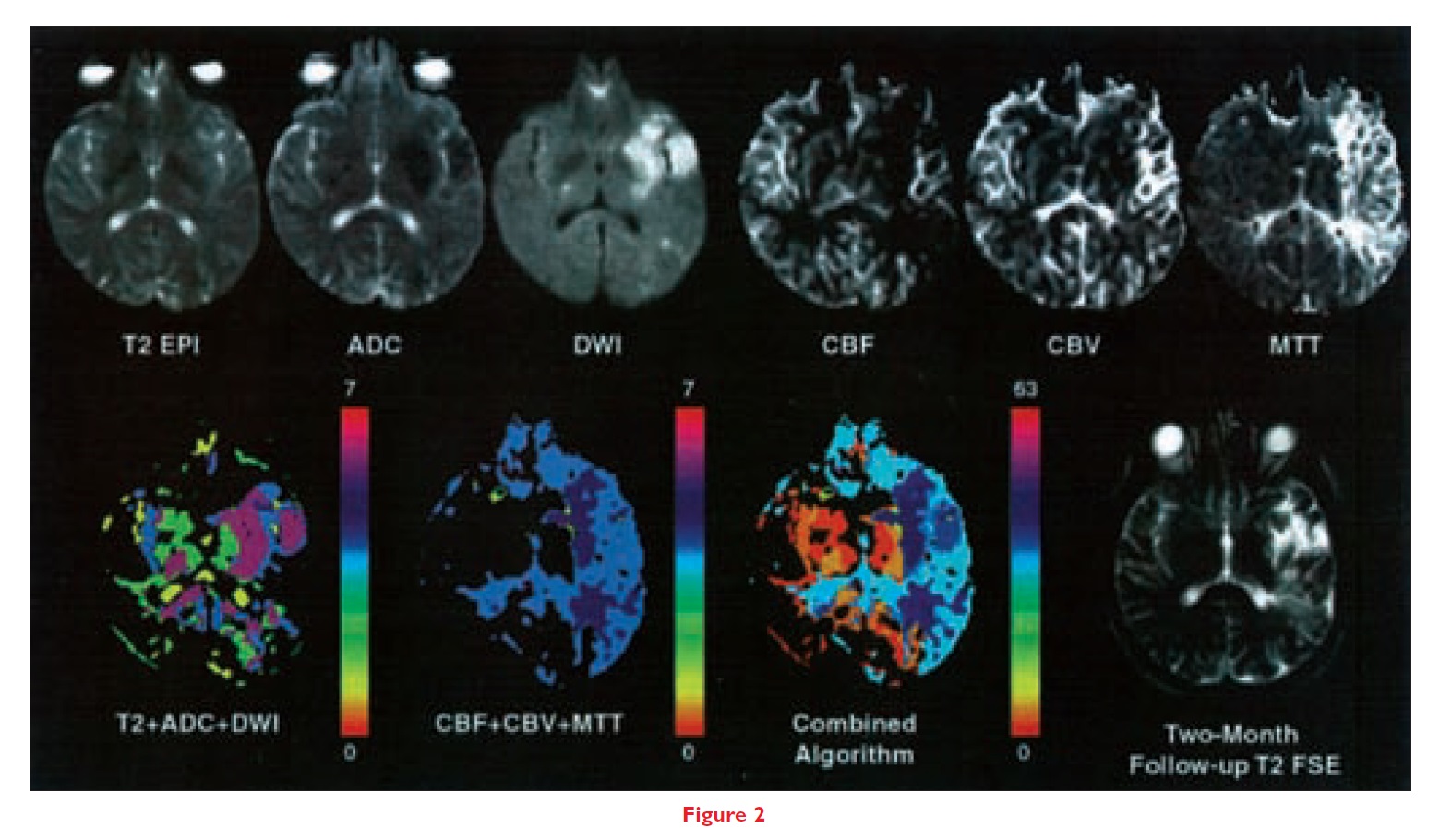 In both examples, it has been encouraging to be able to use this information to develop better- validated animal models for designing improved therapies.

Clearly major steps are being made. However, even if novel therapeutic approaches are identified preclinically, this only resolves half the challenge. Can they be tested clinically?

Existing clinical methods for most CNS diseases rely on subjective end-points, suffer from high variability; high placebo effects, and as a result, require large patient groups. Better clinical methods that can be used to test new concepts with greater reliability and robustness are needed. To date, progress has been slow, but we are now beginning to see some very exciting developments. Again, noninvasive imaging is leading the way. MRI and MRS are able to provide objective non-invasive assessments of CNS pathology and function in response to drug treatment.

The approval of early treatments for multiple sclerosis has already been achieved on the basis of such readouts (14). The use of positron emission tomography (PET) has assumed a particular niche in CNS drug development through its ability to assess brain penetration and pharmacological occupancy of the target site (15). Of all the failed clinical trials, it would be interesting to know how many have failed because test compounds have unknowingly not accessed the CNS. The limitation of PET is the availability of good ligands, suggesting that investment in large scale PET chemistry with the focus on ligand design and validation would be a wise step.

What does the future hold?

Clearly, we have a long way to go to realise our dream. Although there is no doubt of the progress that is being made in the CNS sector, it is probably fair to say that it is likely to be some considerable time before we begin to see the fruits of these hopeful new technological approaches in terms of new drugs. In the meantime, it is important that we continue to integrate the use of modern methods to generate new data, with approaches that have proven useful in the past. The reanalysis of past data is critical.

There are volumes of published data that, when applied to new contexts, can be used to formulate new hypotheses (16,17). Excellent clinical examples of this type of approach include the epidemiological analyses revealing that patients taking non-steroidal anti-inflammatory drugs for rheumatoid arthritis show a lower incidence of Alzheimer’s disease. This has lead to the establishment of recent CNS trials of anti-inflammatory drugs for this condition (18).

Furthermore, reports of the CNS side-effects of the well known anti-hypertensive drug, pindolol and further understanding of its additional pharmacological action (at 5- HT1A receptors) have lead to exciting theories of the possible role of 5-HT1A receptors in depression and mechanism of action of a variety of antidepressant therapies (19). Such integrated activities of past and future should continue if we are stand a chance of ‘beating’ CNS disease. DDW

Dr Julie Barnes worked in R&D for GlaxoSmithKline (formerly Glaxo and GlaxoWellcome) for more than 14 years accruing years of experience in the leadership and management of target and lead progression for a number of drug discovery programmes, with a particular specialisation in central nervous system (CNS) diseases. Her last role was Head of Department in Neuropharmacology Research for Psychiatry (GSK). She is currently Chief Scientific Officer at Biowisdom Ltd, a discovery organisation built on an information platform which is used for the discovery and development of medical strategies.

Dr Ann Hayes worked for 22 years for GlaxoWellcome (now GlaxoSmithKline) initially in research, with particular expertise in the areas of CNS and analgesia. Her last position with GlaxoWellcome was an international role as a Director in Drug Discovery, with accountability for determining long-term discovery strategy across all therapeutic areas, and with additional responsibilities in portfolio management and in re-engineering discovery process. She is currently founder and non-executive Chairman of Ionix Pharmaceuticals, where she consults on pre-clinical and clinical development strategy. Dr Hayes also sits on the board of Syngenix Ltd and consults for various other smaller biotechnology companies.