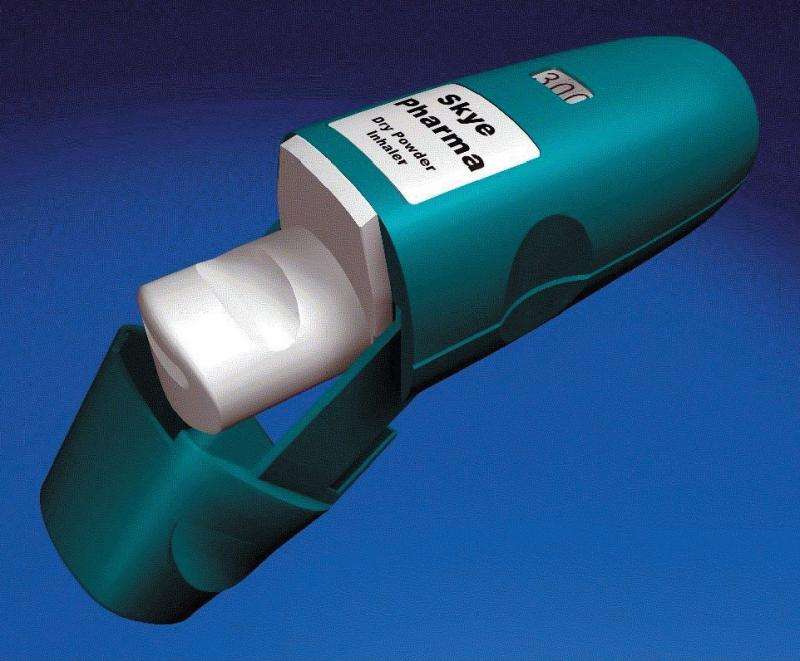 The importance of drug delivery as a tool to improve R&D productivity, to provide a pathway for valuable drugs to be successfully commercialised and as an expanding resource to the pharmaceutical and biotech industry, has come a long way since the early work of the University of Kansas. This article explores the advances made in drug delivery technology.

The phrase ‘drug delivery’ is a generic description of pharmaceutical designs that improve therapeutic efficacy of a drug by controlling how the drug is brought to the target site. By this definition drug delivery is more than a formulation design or system but encompasses a broader array of characteristics including properties of the drug entity itself.

The drug delivery industry has grown into a diverse industry after the start of Alza in 1968 and ranges from small companies, with one technology to large companies with a range of drug delivery technologies and even their own marketing capability (eg Elan). The market for pharmaceutical products, formulated with a drug delivery technology is estimated to be worth at least $45 billion and growing at 15-20% which is more than double the growth rate of the pharmaceutical market. The drug-delivery market can be split into four main technology areas: Injectables, Inhalation, Oral modified release and others (Figure 1). 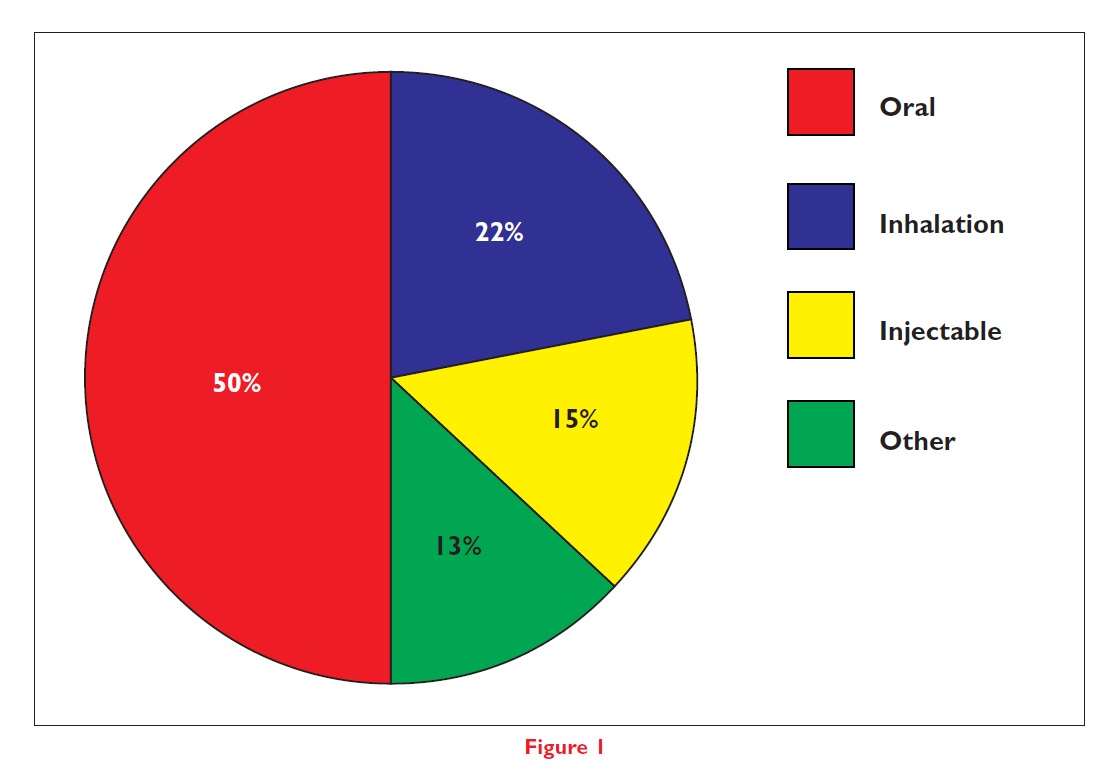 Rationale for growth in drug delivery

Many experts believe that the drug delivery market will maintain its healthy growth rate in the foreseeable future. This belief is fuelled by a number of reasons.

1. Use of discovery tools like high throughput screening, combinatorial chemistry and genomics are resulting in a large number of new chemical entities (NCEs)

Most of these potential drugs suffer from problems that make them unsuitable for ‘naked’ delivery into the body. Very often, these problems can be solved by using an adequate drugdelivery technology. Some examples are given in Table 1.

Proteins, peptides, oligonucleotides, DNA and other large molecules present a variety of well-known drug delivery problems, which may include: lack of oral bio-availability due to degradation by gastrointestinal enzymes; short half-lives, necessitating frequent injection or infusions; dangerous side-effects, associated with peak drug concentrations; prolonged exposure often required for effectiveness and compound instability leading to formulation difficulties. With these issues in mind it is clear that an adequate delivery technology (eg encapsulation in lipid foam; Depofoam®) can have a tremendous impact on the in-vivo activity of a macromolecule.

3. Strong advances in drug-delivery science are being made

These are leading to breakthrough innovations with major impact on pharmaceutical therapy. One such innovation is the development of inhalation and formulation technology that enables delivery of systemically active molecules by inhalation. For some therapies (eg short-acting insuline) this can replace an unpleasant injection with a much more patient-friendly means of delivery. One future area where delivery may play a crucial role is gene therapy. One of the key issues in the implementation of this treatment is adequate delivery of the genes to the target tissue. Another important area with many new developments under way is disease-specific targeting: today, most drugs reach organs or tissues that are not the locus of the pathologic disorder.

4. The increasing competitive and financial pressure on the pharmaceutical industry creates the need to maximise profit flow from existing products

An innovative delivery form of an existing molecule can virtually extend patent-life at a limited investment. Some examples are given later in this article. A pre-requisite for using such a strategy successfully is that the new dosage form should offer real benefits versus the old one (eg once daily dosing instead of three times daily).

5. Drug delivery can enable a new product’s profile to be competitive at launch

With increasing scientific complexities, competition in certain areas may already start in the discovery phase. It is no coincidence that many pharmaceutical pipelines have molecules in the same class (eg NK-antagonists, AII-antagonists, LTD4 inhibitors). It can be a decisive competitive advantage to have a more advanced dosage form at launch than competition. A good example of this strategy is Merck’s Singulair® – a LTD4 antagonist for use in asthmathat entered the market as third after Zeneca’s Accolate® and Abbott’s Zyflo® , but had a oncedaily formulation versus four times daily for Zyflo® and twice daily for Accolate®. Today, about two years after its launch Singulair® is the clear market leader.

A plethora of drug delivery systems has been developed over the past decade by many different institutions and companies . Each of the systems has its own specific advantages and area of use, but a system’s properties can never be seen in isolation from the active ingredient that it incorporates. Below a short description of several key technology areas is given:

Since for most products the oral route is the preferred way of administration, oral drug delivery products continue to lead worldwide drug delivery markets. Departing from primary dosage forms as capsules and tablets, many more technologies are now available to control the release of an active ingredient. Examples of release profiles are sustained release, quick release, delayed release, zero-order release, combinations of the previous and in some cases even targeted release. The field has been driven forward by the commercial success of products such as Procardia XL® and Cardizem CD® and oral delivery systems are now used in an incredibly wide range of drugs.

Originally used to deliver molecules with a local action in the lungs to treat diseases like asthma and chronic bronchitis. The most frequently used device is the Metered Dose Inhaler (MDI) which has some intrinsic weaknesses: it uses a CFC propellant, it is very inefficient and exact patient co-ordination is needed. Today, many new developments of devices (dry powder inhalers, breath actuators, soft-mist inhalers) and formulations are ongoing to overcome these weaknesses.

With this new development a much more efficient delivery is possible, and the combination of device technology with advanced formulations has opened the gate to the delivery of systemically active molecules via the lung. For these products, inhalation is a patient-friendly alternative to injections. Today, several ‘systemic’ molecules (insuline, growth-hormone, morphine) are in clinical development with many more potential opportunities ahead. 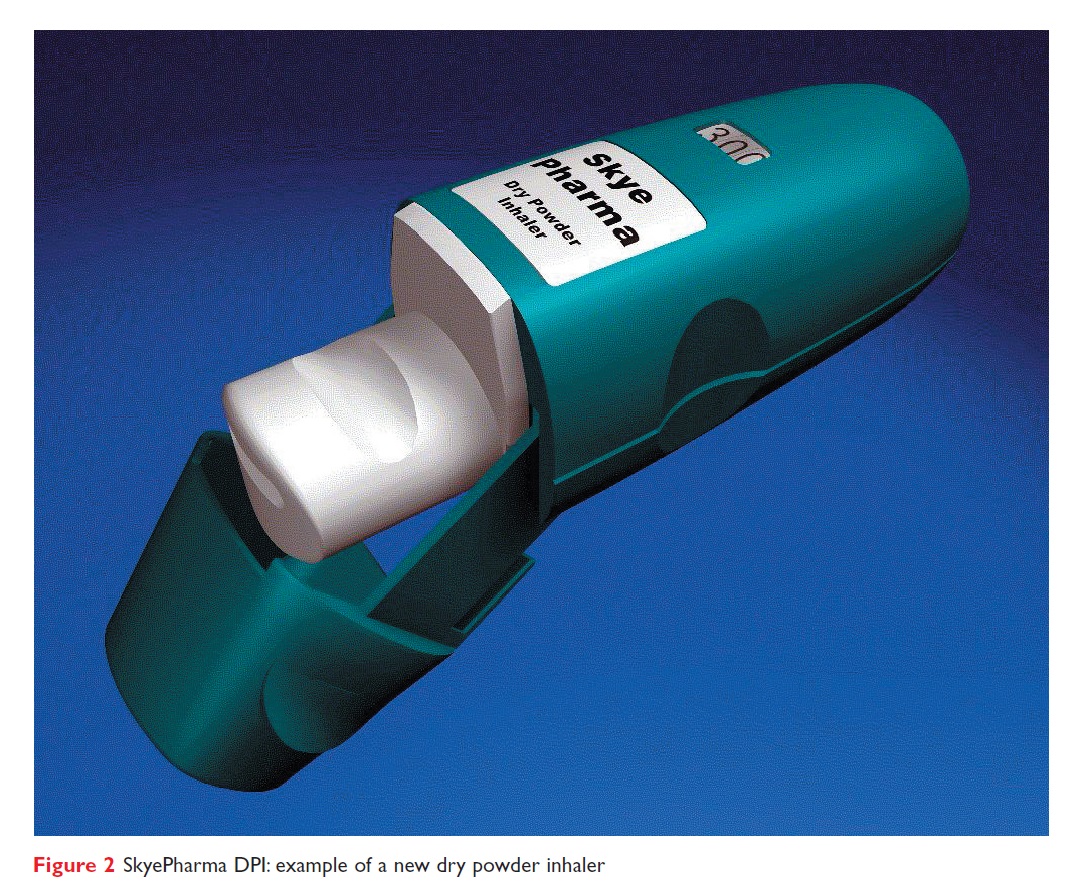 Drugs are delivered directly into the bloodstream via the skin, which has the following advantages: avoiding a first pass effect, sustained delivery over days and strong patient acceptance. Commercially successful transdermal products have been developed for hormones, nitroglycerine and nicotine. Passive transdermal systems are limited in scope because the skin’s outer protective layer keeps out most molecules.

A sophisticated way of delivering drugs in a time-released manner is encapsulating them in small compartments of lipids or polymers. An example of such a product is Depocyte®, containing Cytarabine as the active ingredient. The duration of effect is prolonged from two days to 14 days; a major benefit for oncology patients who need to visit their physician less frequently.

An increasingly important area, because many new discovered compounds have biological activity but are poorly soluble in water. By ‘nano-sizing’ the drug crystals to a size many times smaller than by conventional micronisation, such drugs can be formulated in a conventional dosage form. Additional advantages of such technology, which can also be used to improve existing drugs, are: better dose uniformity, enhanced bio-availability and less food effects. Several companies are active in this field and use different technologies to reduce the particle size (eg high-pressure homogenisation, grinding and supercritical fluids).

To test compatibility with a drug, a small feasibility test is carried out first, followed by formulation optimisation and production of clinical samples. As the next step, scale-up takes place and large scale samples are produced for the pivotal clinical and stability studies. Finally, the product is submitted for registration.

Obviously, capabilities in these critical area are key success factors for a drug delivery company on the road to commercial success.

When trying to establish the value of a delivery technology for a certain drug it is important to consider the following aspects: sales scenarios with and without the delivery technology – usually market research is a good tool to get a better understanding for the value of a technology once it is in the hands of patients and prescribers; pricing potential (a better delivery form could command a premium price); cost of goods of the new product; and development cost.

With this kind of information, a basic valuation of a project can be made. Such a valuation is helpful when comparing the project with other development opportunities, or when negotiating with an external drug delivery supplier (who has probably made similar calculations)!

Since drug delivery technology is already used since a number of years, there are many examples of the value of such technology in product life-cycle management. In most examples it is possible to maintain sales growth over many years, even beyond patent life. A typical pattern is given in Figure 3, where an original dosage form is followed by new forms that fuel growth over a long period. 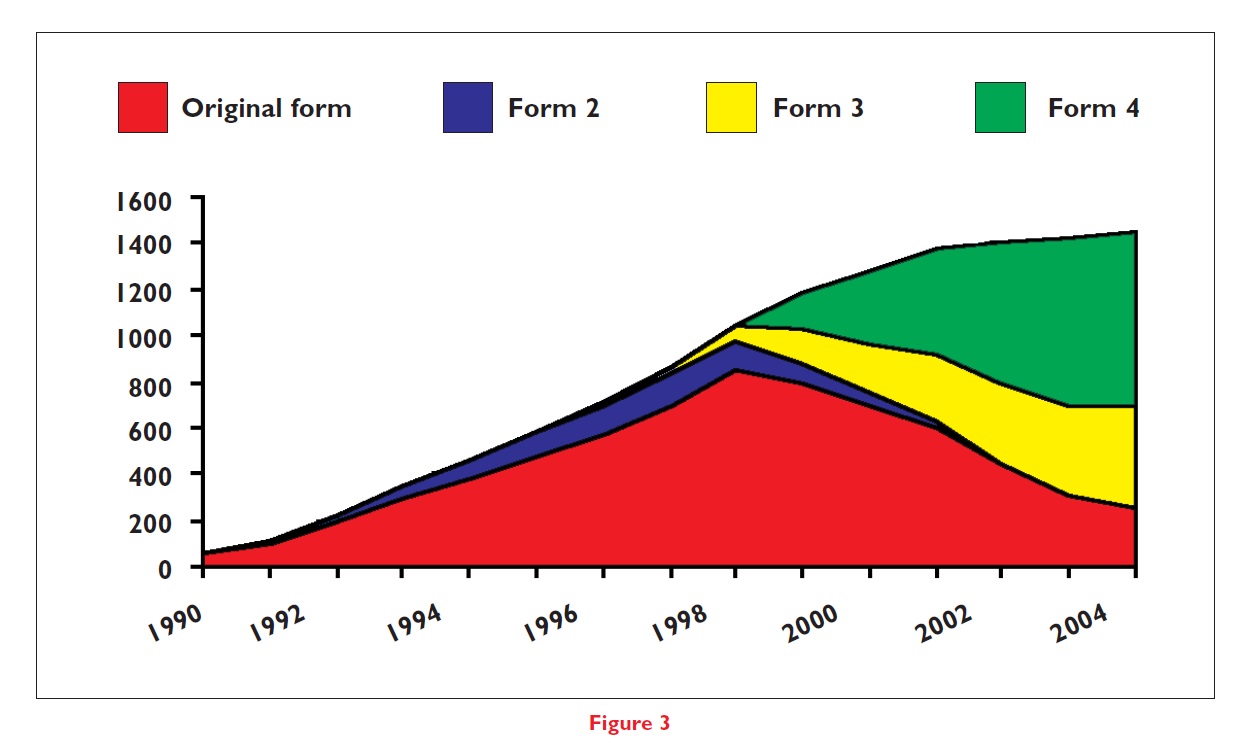 There is strong activity in development and clinical testing of drug delivery technologies. A first wave of products has already reached the market and achieved commercial success. A number of factors will fuel the drug delivery market growth and it seems that drug delivery companies and pharmaceutical companies have an excellent opportunity to build synergetic partnerships, which can create not only wealth for the participants, but also products that can dramatically improve life of patients using them. DDW

This article originally featured in the DDW Winter 2000 Issue

Having graduated as a medical doctor at the University of Amsterdam, Cornelius ‘Cees’ Winnips went on to become a physician with the Dutch army before joining Ciba-Geigy Netherlands in 1989. He then went on to perform many senior roles with the Ciba Group before becoming International Product Manager, Asthma & Allergy at Ciba/Novartis Basel. He is currently Head of Global Strategic Marketing for SkyePharma Plc.