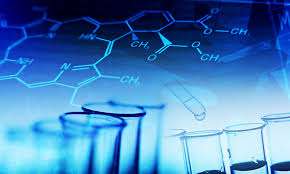 Different companies have employed various techniques and strategies for addressing productivity issues in the chemistry functions within pharmaceutical discovery and preclinical development.

Results from the benchmarking analyses of strategies, processes, resources and organisational structures in the chemistry functions are presented and discussed in terms of their implications for improving delivery of chemistry capabilities in early drug discovery.

Other explanations include the lag associated with applying the voluminous amounts of new information generated by the genomics, transcriptomics and proteomics tools. Any examination of the R&D process is difficult, given the context of rapidly evolving technologies and decade-long product discovery and development. But benchmarking provides one way to better understand R&D by identifying best practices and areas for improvement. Since the chemistry capability is a vital function, we initiated benchmarking efforts in this area.

The purpose of this study was to benchmark the chemistry functions within lead generation in the pharmaceutical industry. We examined current industry trends and individual company positions regarding lead optimisation, clinical candidate selection and chemistry support for pre-clinical development before an investigational new drug (IND) filing.

We utilised a high performance business framework (3) to structure our benchmarking effort. Whether at the corporate, line-of-business, or business- function level, maximum productivity and performance are better achieved when critical business processes are designed to support the strategy, and when resources and organisation are effectively allocated and aligned.

Overall attrition rates for participants are shown in Figure 1. 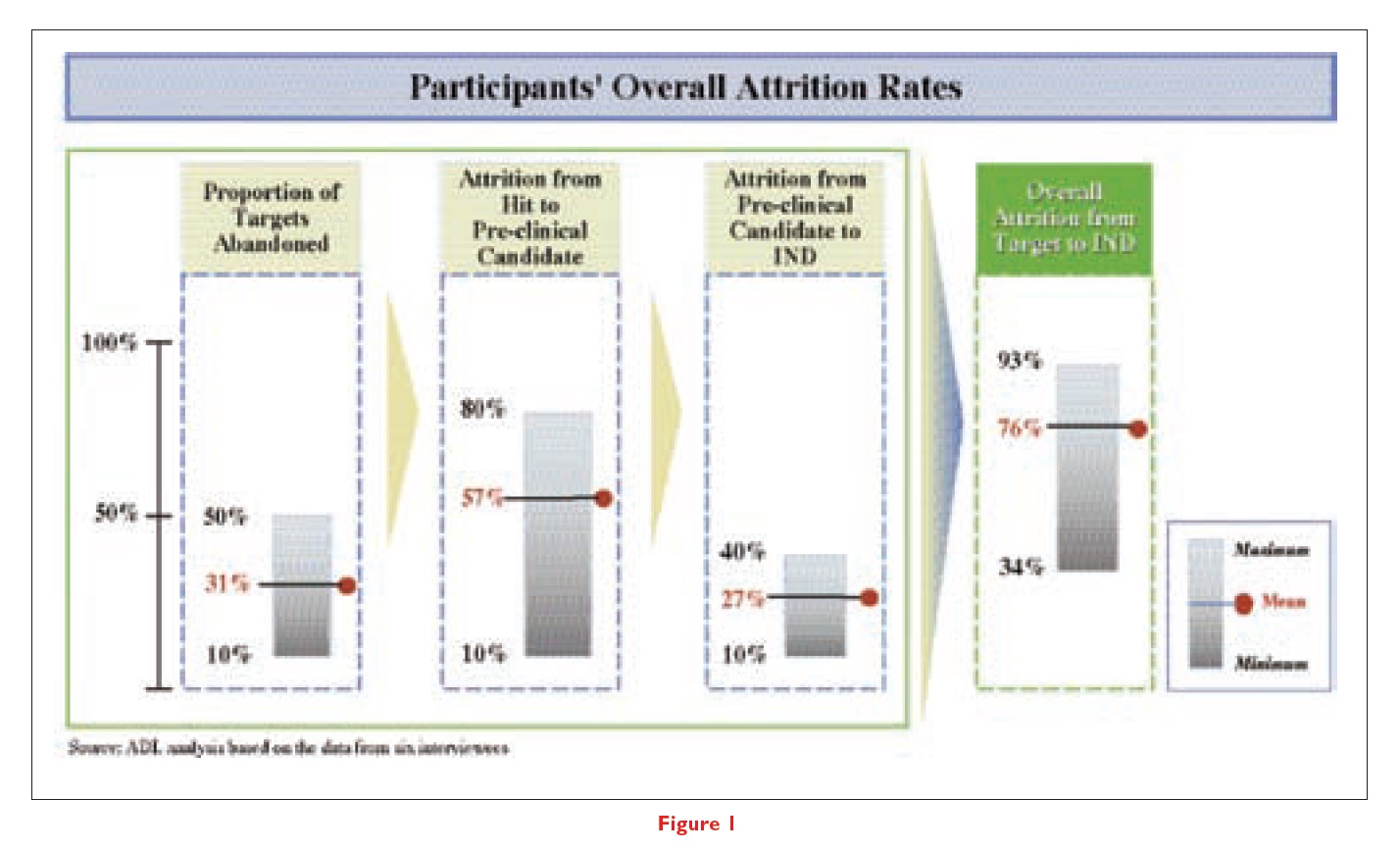 This variation could be due to the differences in the criteria used to advance from one stage to another, as well as differences in business-model alignment. In fact, whether a high or low attrition rate is good or bad at this stage cannot be determined from the data collected in this study. On average, 66% of the total leads generated were derived from combinatorial chemistry and high throughput screening (HTS), including traditional libraries, combined.

As shown in Figure 2, combichem and HTS ranged from a low of 21% in the case of one company to a high of 100% for two other companies. On average, 9% of the leads were derived from external collaborations and only 4% from natural products – the main lead source throughout most of the twentieth century. 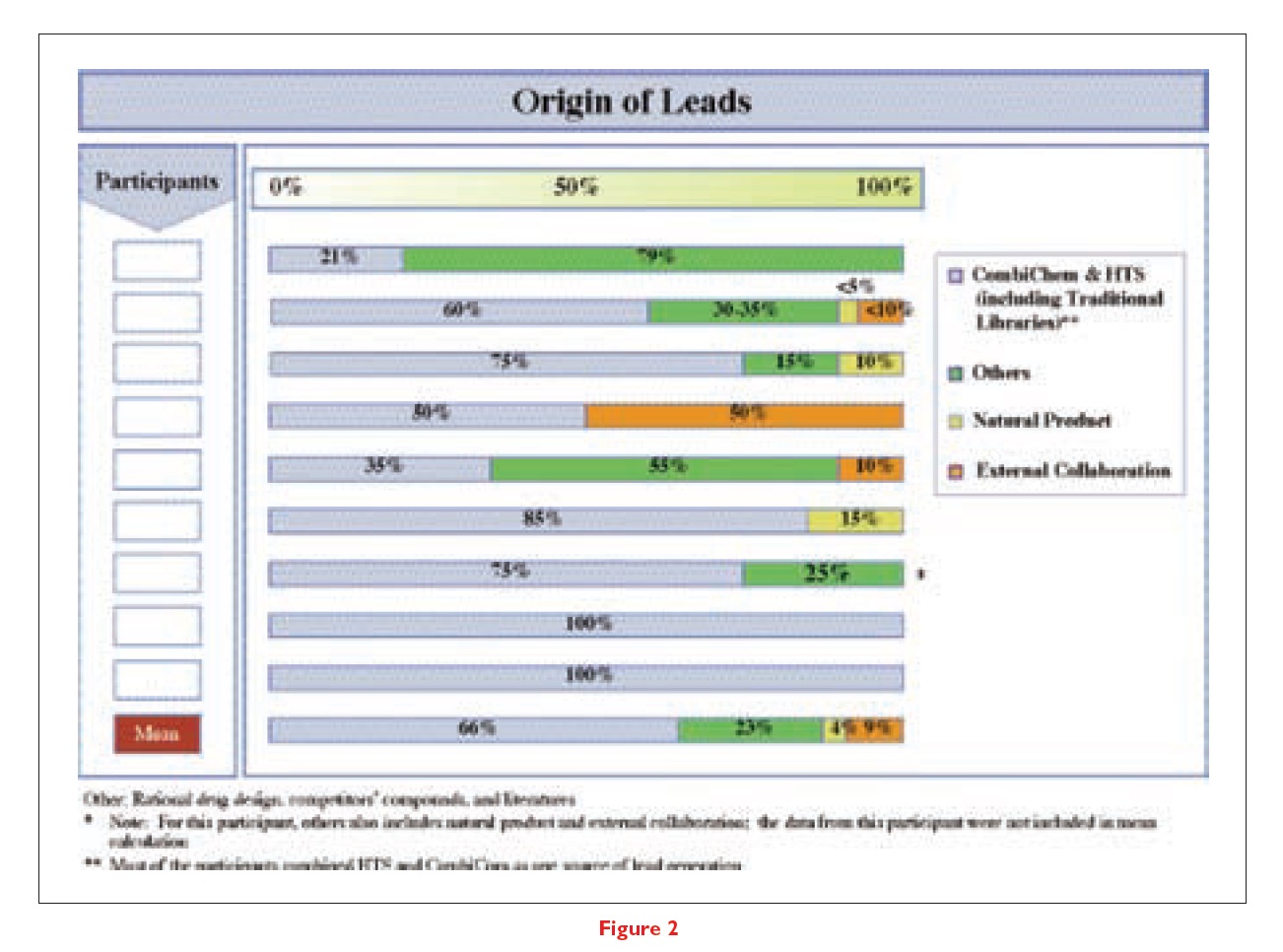 When asked to identify their main tactics for improving lead finding and optimisation, the participating companies named early ADME/Tox studies (4), adoption of target family approaches and heavy emphasis on structural analyses. One respondent intended to “use IT tools, such as predictive models to incorporate ADME/Tox information early on”. Another expressed a preference for a “chemicogenomics” approach as a pathway toward target families.

Most participants expect IT to improve productivity and have adopted an IT strategy that focuses on implementing portals with user-friendly interfaces to multiple databases. More than half the participating companies foresee important roles for computational chemistry/molecular modelling, virtual screening and predictive ADME/toxicology models. Seven of the nine companies mentioned better IT tools as an important trend in medicinal chemistry.

No consensus was reached regarding the impact of genomics on drug discovery and the strategies adopted by participants to address the issue are notable in their differences. One group of respondents expects significant improvements to occur in target validation that will address the huge number of potential targets generated through genomics. Specifically, the respondents expected the pathway approach (eg, signal transduction pathway) and chemicogenomics to yield more high quality and ‘tractable’ targets.

Other participants expect to rely more on external alliances to bring in series of lead compounds at the preclinical stage (ie, leads already optimised). All the participants agree that the challenges identified through genomics analyses should be addressed before lead optimisation. Of course, given that genomics is still in its early stages, its expected impact may not be realised for many years.

Other commonly cited reasons for termination included: lack of progress, improper chemical and physical properties, invalid target and change in business or competitive environment. Most participants have cross-functional involvement in various discovery phases. To improve the quality of the early-stage compounds, most companies brought in medical and marketing groups to assess the compounds’ economic impact and clinical relevance.

Most companies acknowledged that predictive ADME/Tox is a key unmet need in medicinal chemistry. Toxicity and DMPK were noted as bottlenecks in lead optimisation and in the selection of compounds entering development. Lack of predictive toxicology is considered an obstacle to improving chemistry function productivity.

Participants have adopted three kinds of organisational structures to conduct pharmaceutical research, as shown in Figure 3. 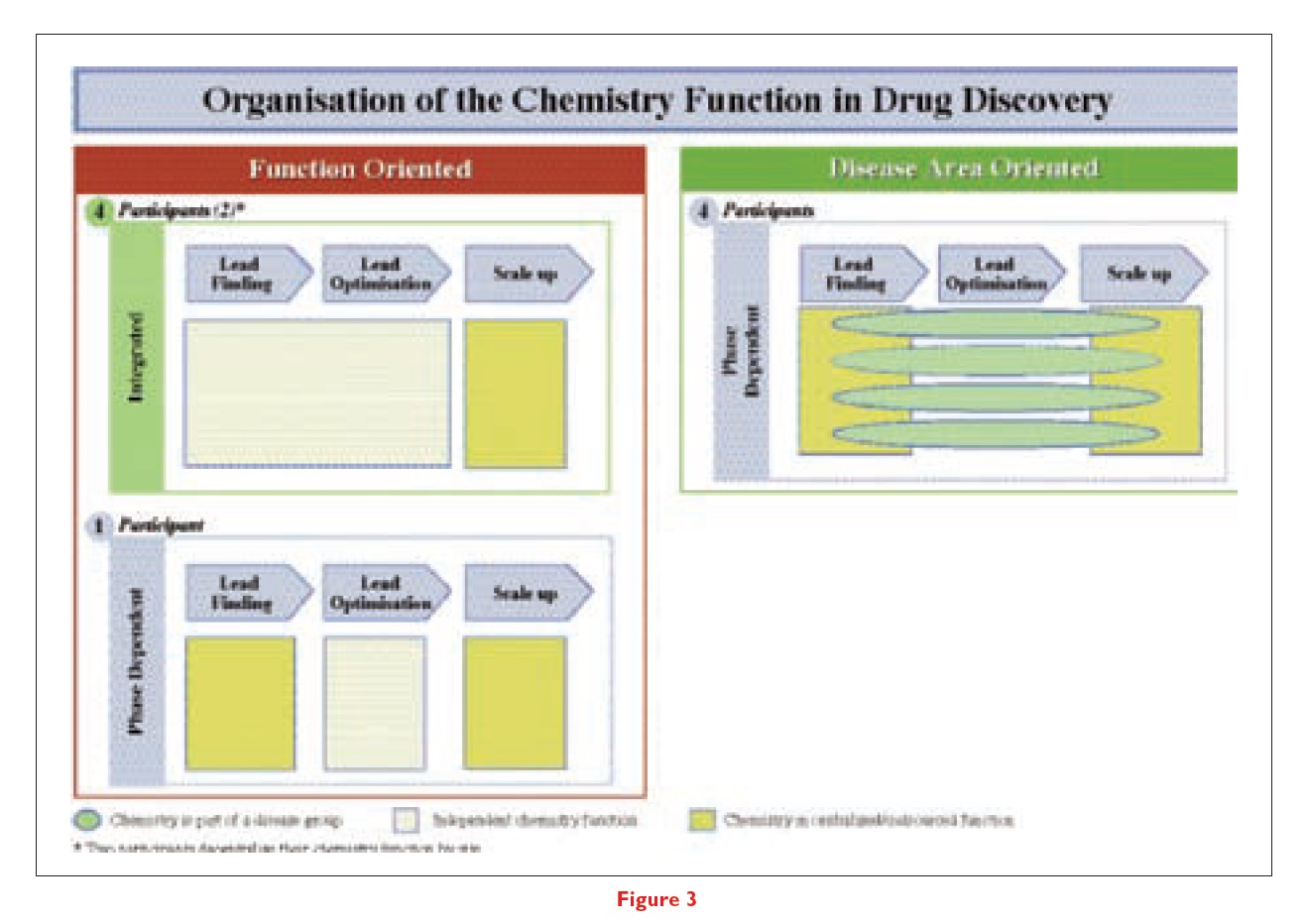 Most have either a function-oriented or a disease area-oriented structure with scale-up usually performed in a separate organisation. Centralised lead finding groups are either accountable for generating hit/lead compounds or function as a service providers. All participants have centralised compound collections.

During the past 10 years, participants formed research alliances primarily in the areas of genomics, combichem and HTS. The principal strategic objectives of these alliances were to: enhance existing expertise, test new technologies, learn from partners as the technologies matured, fill internal gaps, bring new capabilities to the organisation and avoid the risks and high fixed costs associated with internal investments in unproven, novel technologies. Most companies employ a centralised group to organise and manage alliances.

As expected, most companies require different levels of management to approve the alliances, depending on the size of the investment. Most companies have R&D sites with comprehensive capabilities and some specialised sites dedicated to key technologies, such as genomics. The participants have between three and 10 sites throughout the world. It is common for these companies to have two sites that are 16 time zones apart. The communication and work style/cultural challenges of working collaboratively across such large geographic areas are, of course, widely recognised.

The average ratio of PhDs to non-PhDs was 1:1.5 and the average PhD’s experience was about 9.5 years. Most participants reported an average chemistry function staff turnover of 3.8% and have built, or are building, relationships with universities to enhance recruitment efforts and improve the retention of quality scientists.

The majority of study participants outsource activities equivalent to at least 5% and at most 25% of their chemistry budget. The highest levels of outsourcing are for items such as building blocks/chemical intermediates/bulk actives, for which six of the nine companies outsource 10% to 80% of their budgets.

Six companies outsource libraries for lead identification, but only three of these use external sources for 20% or more of their chemistry budget. Six companies use external sources for chemical series for lead optimisation, with 20% being the highest level reported by any company. The level of outsourcing for libraries for lead identification and chemical series for lead optimisation is lower than for other functions in a pharmaceutical company. This suggests that these particular chemistry functions are considered core competencies and, therefore, internal to the organisation.

The companies that integrate chemistry across preclinical functions are more satisfied with the performance of discovery. Measures and milestones do differ among companies, as do the criteria used to terminate a project. The small sample size makes it difficult to draw conclusions about the relationship between these measures and performance.

Resources: There is agreement on some key technology bottlenecks. The lack of predictive ADME/toxicology technology and surrogate markers is both a barrier and a bottleneck to improving overall R&D productivity – a barrier because of the difficulty in predicting clinical relevance and a bottleneck because the high uncertainty may prevent projects from advancing more quickly.

This investigation suggests that development of predictive toxicology screening methods (eg, assays to detect toxic responses) is likely to be readily adopted. Technologies that simulate biosystems in silico to enable predictive human ADME/Toxicology may be the ‘silver bullets’ in discovery, but are not likely to appear in the short term.

Dr Roger Edwards is a Director in TIAX’s Life Science business. His prior work includes more than two decades of experience in industry, academia and government in the diffusion of medical innovations. Dr Edwards holds an AB in Human Biology and an MS from Stanford University along with an ScD from the Harvard School of Public Health. He is co-inventor on one patent, co-author of 11 journal articles and three book chapters and has made more than 60 professional presentations in the health, medical, and technology fields.

Dr Kai Zhang is a Manager in TIAX’s Life Science business. He has extensive experiences in the pharmaceutical industry and has worked in the various functions including strategic planning, marketing, and sales. He also conducted three years of molecular biology research in the field of cancer gene therapy. Dr Zhang holds an MBA from the University of Michigan Business School and an MD from the Hunan Medical University in China.

Louise Firth is a Director in TIAX LLC’s Life Science business. She has more than 20 years’ experience working with companies, government agencies and trade associations on commercialisation of pharmaceuticals, diagnostics, medical devices and healthcare services. Ms Firth hold an MS in Business Administration and an MA in microeconomics, both from Northeastern University. Her publications include articles in journals, the trade press, monographs and a book chapter. She has presented the results of her work before the public, trade groups, government agencies, arbitrators and courts.