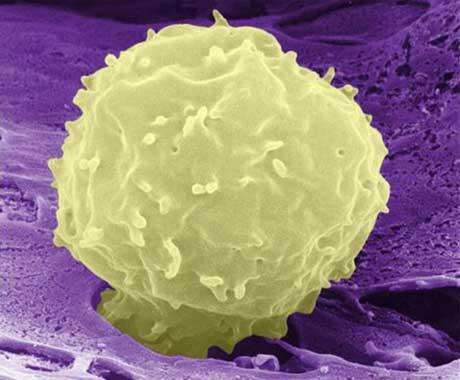 More recently, there is interest in the utilisation of a number of different adult stem cell types harvested from various tissues for treating various human diseases. In some cases the adult stem cells may be utilised in autologous recipients, whereas in others they may be transplanted into allogeneic recipients. Importantly, these new waves of cellular therapeutics expand the market opportunity of disease areas potentiallyaddressable via stem cells beyond merely hematopoietic-focused diseases.

The key driver behind the use of cellular therapeutics is the possibility of regenerative and restorative medicine across a number of disease classes. Areas of potential applicability include cardiovascular diseases, central nervous system (CNS) diseases, diabetes and musculoskeletal disorders.

It is important to note that adult stem cells (ASCs) are perhaps the most-suited as cellular therapeutics at least in the near-term, for the following reasons:

-Hematopoietic cells from bone marrow or peripheral blood contain ASCs and these have successfully been utilised across a number of primarily hematopoietic disease areas.

-A large body of work in the ASCs space has been performed using mesenchymal stem cells (MSCs) which appear to provide a milieu facilitating tissue regeneration (and are immunosuppressive, therefore may be utilised in the allogeneic setting).

-ASCs do not pose a significant risk for uncontrolled proliferation, tumorigenesis or teratoma formation as opposed to embryonic stem cells or other cell types whose toxicity profile is relatively uncharacterised.

-There are a small number of clinical trials that are being initiated utilising neural stem cells (NSCs). 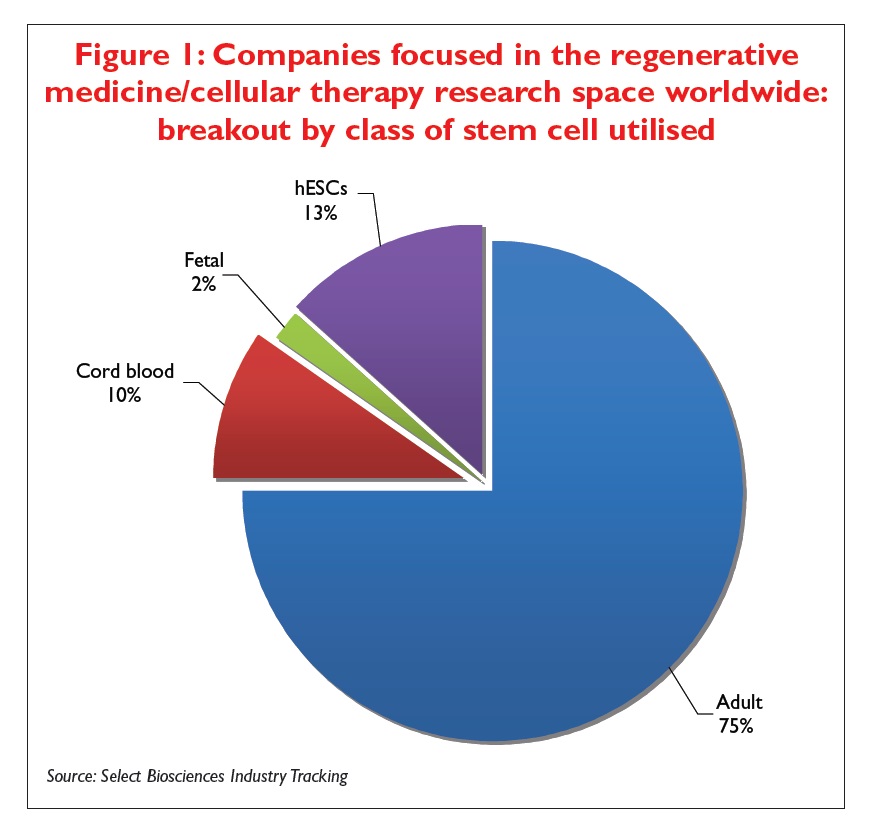 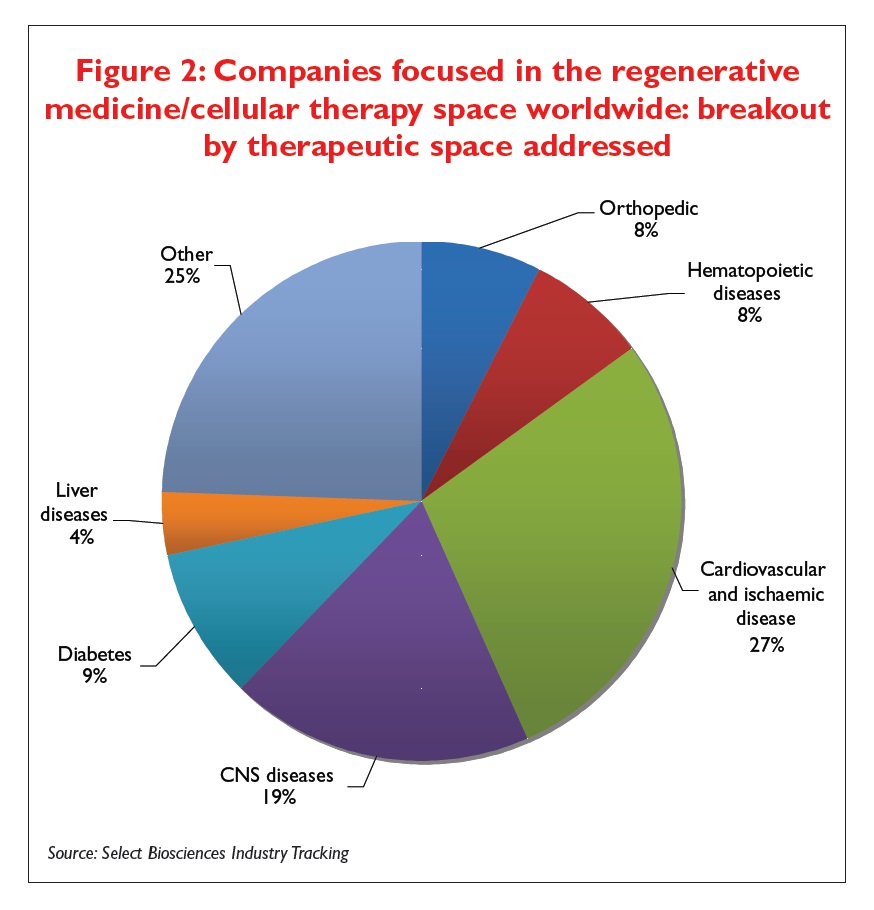 Note from the exhibit that the top-most therapeutic class for which cellular therapeutics are being developed is cardiovascular and ischaemic disease. The second- most penetrant disease class is that of central nervous system (CNS) diseases.

Even though many cellular therapeutics are in development and are not approved by the US FDA or the EMEA, there are a selected few institutions around the world that do provide cellular therapeutics under licence by government bodies and under strict clinical supervision. Such institutions are markedly distinct from the stem cell tourism that has attracted the attention of the popular press and has in many ways clouded the field of stem cell therapeutics.

One such institution is the X-Cell Centre for Regenerative Medicine (Cologne and Düsseldorf, Germany). The focus of this institution is to utilise autologous bone marrow-derived stem cells for treating CNS and cardiovascular disease patients. This institution’s focus is to concentrate and provide bone marrow-derived cells at the site of a lesion and in this manner generate a milieu at the site of the lesion which is conducive to tissue regeneration.

Note that the cells being utilised by the X-Cell Center have not been modified or engineered ex vivo – therefore the effects of expansion and differentiation ex vivo can be eliminated and the innate regenerative effects of the stem cells are being exploited.

Dr Arnold Caplan, Director of the Skeletal Research Center at Case Western Reserve University, speaking at the Select Biosciences Stem Cells World Congress (January 2010, South San Francisco, California), pointed out that the role of mesenchymal stem cells (MSCs), which have been described as potent mediators of cellular regeneration in a number of disease areas across model and human systems, may merely be to create a ‘space’ at the site of a lesion that is both immune-privileged attractive of other cell types via paracrine effects for the latter to actually mediate tissue regeneration.

Therefore, the data obtained by the X-Cell Center in the CNS and cardiovascular model systems may be explained by the fact that the concentrated presence of MSCs and other stem cell types derived from bone marrow may in fact create an immuno-protected milieu at the site of a lesion (such as spinal cord injury or ischaemic lesion) so as to enable paracrine effects from other cell types attracted to the lesion site to in fact enable tissue healing.

Dr Amit Patel, Director of Clinical Regenerative Medicine at the University of Utah, speaking at the Select Biosciences Stem Cells World Congress, also pointed out that by far the evidence in cellular therapy mediated by MSCs points to a paracrine mechanism of action – implanted cells produce cytokines that act in trans to attract other cell types, mediate immune-suppression and in toto contribute to the regenerative effect that is observed clinically.

Figure 3 presents the landscape of different cell types as well as companies that are conducting clinical studies utilising cellular therapy for cardiovascular disease. 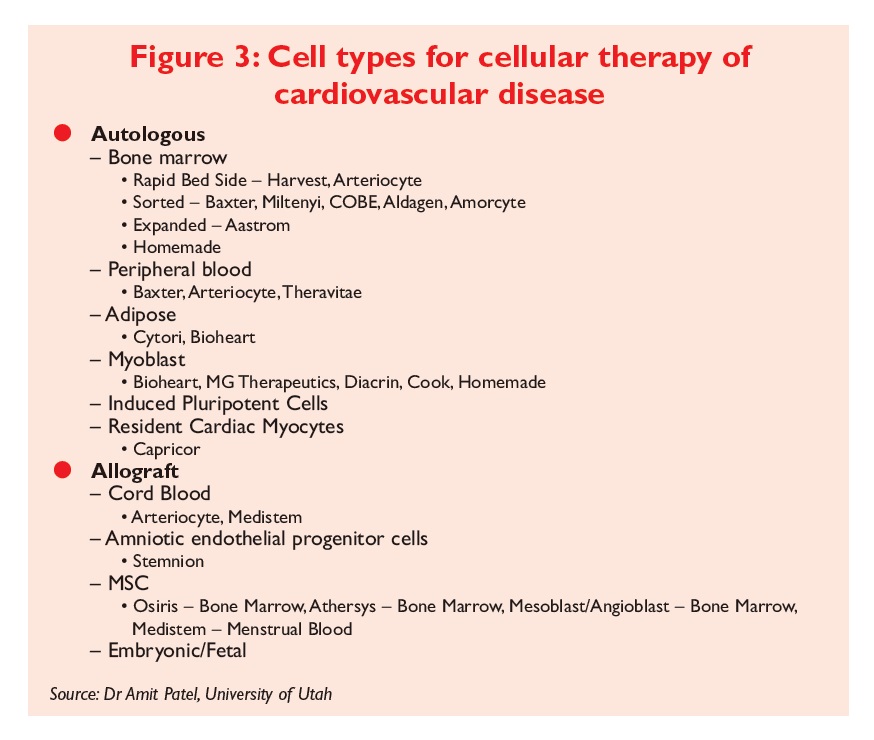 There are a number of avenues for the development of cellular therapy – many different cell types are being utilised, a number of different clinical conditions are being addressed and various clinical trials are being conducted worldwide. Given the complexity of cellular therapy there isn’t any doubt that there is no single research approach that is dominant and indeed we feel that this market will stay fragmented with a variety of different approaches, cell types, and treatment modalities that will be researched in the coming years.

In an attempt to further classify the stem cells landscape, we have analysed in detail the publications from the PubMed database that in their title or abstract refer to stem cells. Figure 4 shows the growth of stem cell publications from 1950 to the present – note the exponential growth in this space. 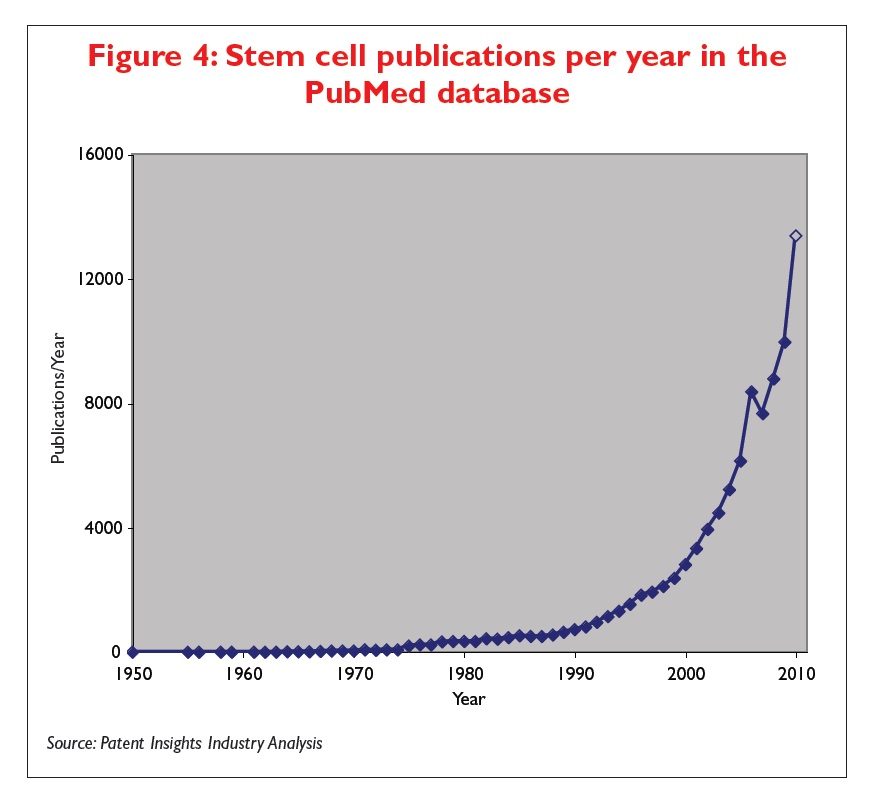 Further characterisation of publication trends in the stem cells space is presented in Figure 5. In this analysis, we subjected 83,000-plus publications referencing stem cells to an algorithm that enabled us to pull out those publications that discuss particular topics/themes. 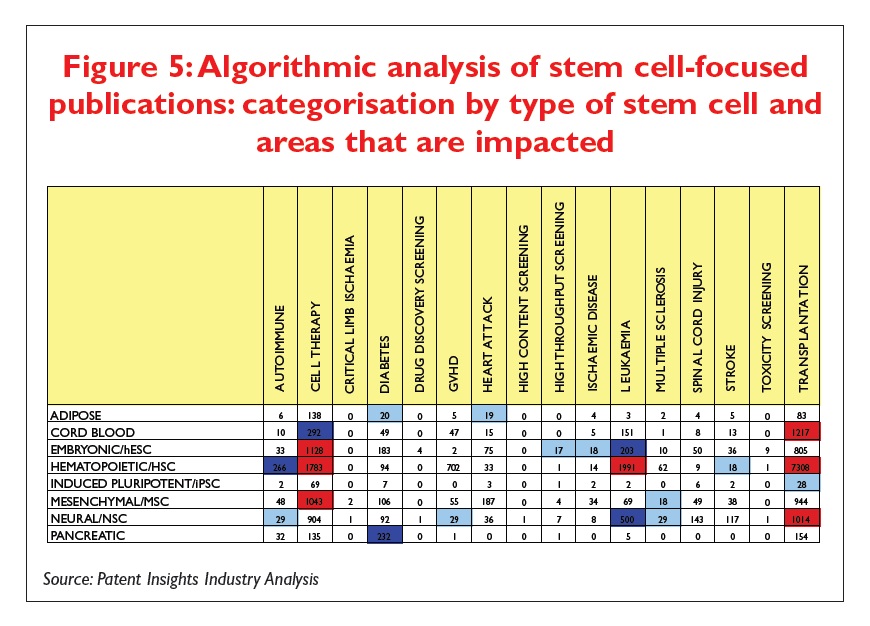 Figure 5 shows the breakout of approximately 23,000 publications that fit into the criteria presented here. Note that the red quadrants represent areas of concentration of publications – such as hematopoietic stem cells for transplantation, leukaemia, as well as under the cell therapy search schemes.

Importantly, note from Figure 5 that the number of publications utilising stem cells in drug discovery screening, high-throughput screening, toxicity screening and high-content screening is exceedingly small – this demonstrates that the penetration of stem cells in these spaces has not occurred as yet to a significant extent.

Also of note are the deep blue boxes – there are a number of publications studying/describing hESCs for transplantation research, HSCs in GVHD space, as well as MSCs in transplantation space, and NSCs in cell therapy.

Taken together, the data presented herein describe the market landscape of the deployment of stem cells across the cellular therapy space – from an end-user research perspective as well as the viewpoint of the publication record.

For an emerging and amorphous field such as stem cell research and its involvement across the spectrum of research, drug discovery/development and cellular therapy, it is important to begin to characterise the marketplace and no single metric is capable of completely and accurately defining the space – this must be accomplished via a combination of approaches and in this article we have sought to provide a snapshot of these industry metrics. DDW

Dr Enal Razvi is currently a biotechnology analyst based in the San Francisco Bay Area. In this capacity, he analyses a number of different market spaces in biotechnology and works with companies in market analysis, business development, and commercialisation operations. Previously, Dr Razvi served as Vice-President of Business Development at a number of biotechnology tools and technology companies. Before this, at LJL BioSystems (Sunnyvale, CA), he served as Senior Director of Business Development and played a major role in developing LJL BioSystems’ SNP genotyping business. Subsequent to the acquisition of LJL BioSystems by Molecular Devices Corporation, Dr Razvi ran Molecular Devices’ Genomics business. Prior to LJL, while at Frost & Sullivan, he served as Director of its Drug Discovery Consulting business. Dr Razvi holds a doctorate in biomedical sciences and completed post-doctoral work at The Rockefeller University in New York and at Harvard Medical School. Dr Razvi can be reached at erazvi@earthlink.net.

Dr Gary M. Oosta holds a PhD in Biophysics from the Massachusetts Institute of Technology and a BA in Chemistry from E. Mich. University. He has 25 years of industrial research experience in various technology areas including medical diagnostics, thin-layer coating, bio-effects of electromagnetic radiation and blood coagulation. Dr Oosta has authored 20 technical publications and is an inventor on 77 patents worldwide. In addition, he has managed research groups that were responsible for many other patented innovations. Dr Oosta has a long-standing interest in using patents and science as strategic technology indicators for future technology selection and new product development. You can reach Dr Oosta at pi@patentinsights.com or at www.patentinsights.com.