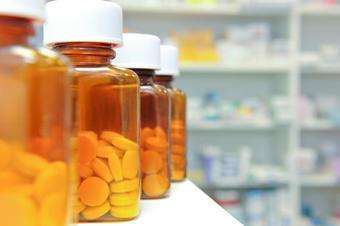 Therapeutic drug monitoring services are a vital part of the pathology laboratory’s remit, providing essential clinical information to guide the management and treatment of a wide range of patients, from those with psychiatric disorders to post-transplantation care.

King’s College Hospital, London, is developing automated workflows for therapeutic drug monitoring by LC-MSMS, taking advantage of recent advances in sample preparation and mass spectrometry to increase throughput and reduce costs. This article discusses how innovation is changing the face of therapeutic drug monitoring to benefit both laboratory services and patient care.

King’s College Hospital, London, is home to a large clinical pathology department offering diagnostic testing services for both the hospital’s patients and external samples from across the UK and further afield.

Managed by Viapath, a joint venture commercial partnership, the department has a busy toxicology laboratory which performs recreational drug screening for rehabilitation centres and therapeutic drug monitoring on a national scale. One of the laboratory’s most commonly requested assays is for monitoring the drug clozapine – used in the treatment of schizophrenia – and it currently performs around 30,000 tests a year for this drug alone.

Clozapine, along with a number of closely related antipsychotics and their derivatives, is analysed by high performance liquid chromatography (HPLC) followed by UV or tandem mass spectrometry (MSMS) detection and, at present, these samples are prepared manually by liquid-liquid extraction. Samples are manually extracted during the afternoon and analysed overnight with reporting of results the following day.

The toxicology team has more than 20 years of experience performing this assay but, with numbers continuing to rise, began to look for ways of automating the sample preparation and speeding up analytical processes to improve throughput and reduce the overall cost of testing. The aim was to make analysis more rapid, more robust and less prone to human error, as well as providing the capacity to grow the service in the future.

The first step in this process was to transfer the manual sample preparation method to an automated liquid handling platform capable of performing the extraction without the need for labour-intensive and time-consuming manual pipetting. At the time, the laboratory was evaluating a novel consumable (AC Extraction Plate™, Tecan (1)) for use in the analysis of vitamin D metabolites in serum. 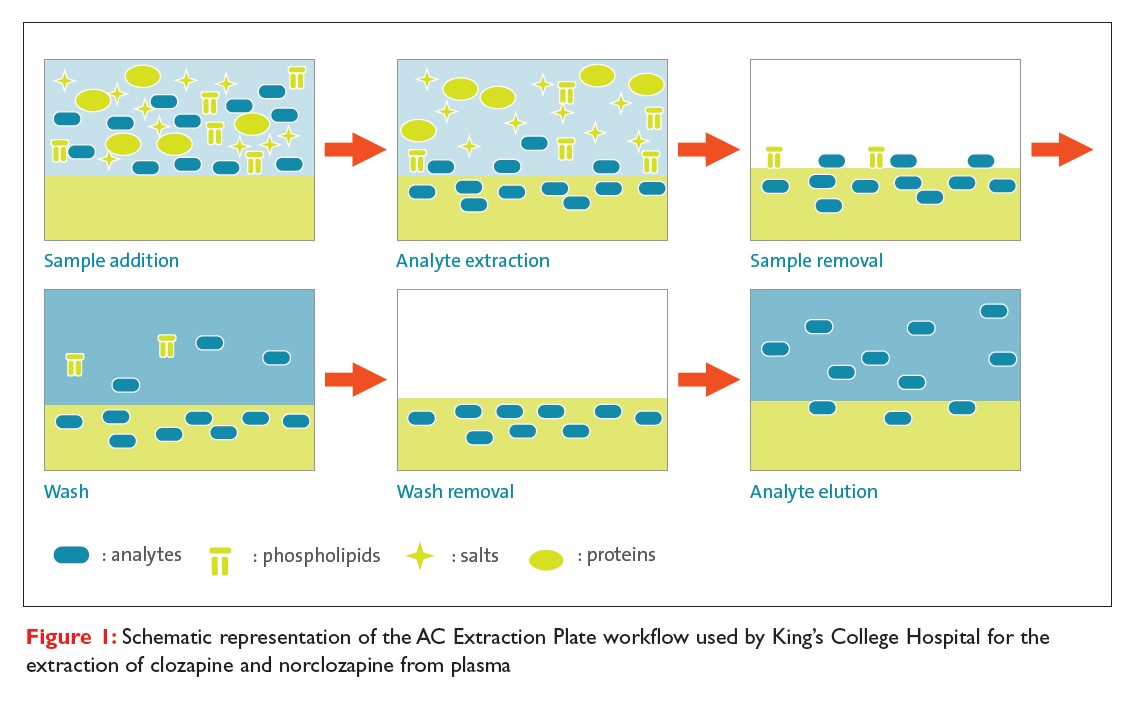 Using a proprietary absorption chemistry coating that acts as an extraction phase for small apolar molecules, this 96-well microplate device eliminates the need for the error-prone centrifugation, filtration and solvent evaporation steps commonly associated with the extraction of specific small molecule analytes from aqueous solutions, reducing sample preparation to a simple and effective ‘pipette and shake’ method.

Once the evaluation of the vitamin D method was complete, the team was confident that this approach could prove equally successful for clozapine testing, and performed a number of manual proof-of-concept experiments with promising results.

The laboratory’s extensive experience with the clozapine assay, combined with the simplicity of the AC Extraction Plate workflow and the availability of large numbers of patient samples for testing, allowed the team to quickly evaluate the method using an automated liquid handling platform (Freedom EVO®, Tecan), developing a robust protocol within just a few weeks.

As with the manual liquid-liquid extraction method, careful selection of the extraction buffer and pH meant that highly selective, efficient extraction of clozapine and norclozapine could be achieved, without interference from metabolites such as clozapine N-oxide. 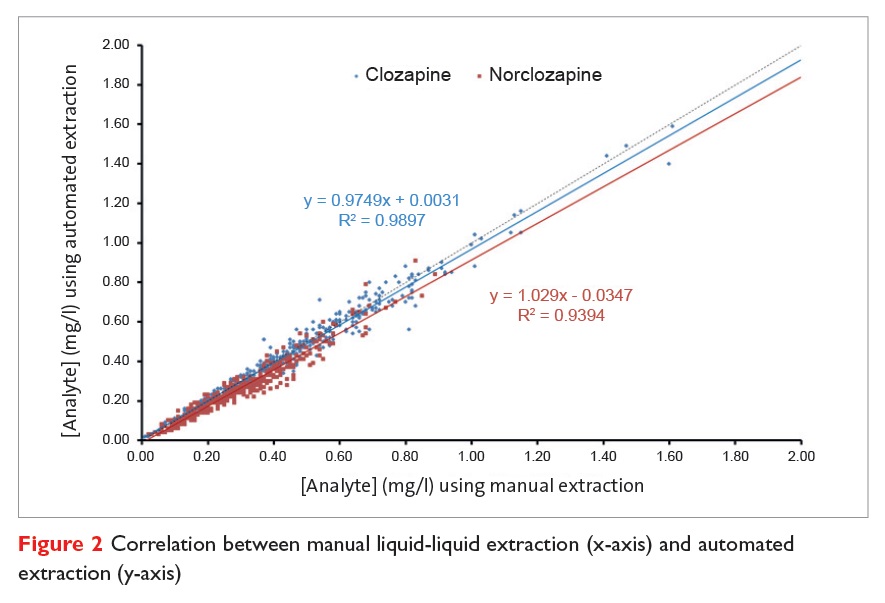 This technique allowed an entire 96-well plate – including samples, calibration standards, controls, and QC materials – to be prepared in around 30 minutes on the automated workstation. The prepared samples could then be transferred directly to the LC-MS system for analysis, with a rune time of just under four minutes per sample, enabling results to be reported within just a few hours.

The key to successfully automating sample preparation is to ensure that the automated workflow is a good fit with both the receipt of samples into the laboratory for testing and the downstream analytical processes. For the clozapine assay, ensuring compatibility with the LC-MSMS analysis was straightforward, as the extracted samples could be eluted from the plate’s absorption coating using 100% methanol – the same solvent as mobile phase for the chromatography.

In contrast to the fairly straightforward process of matching the automated sample preparation to the LC-MSMS analysis, developing a fully automated solution that fits the entire laboratory workflow – from sample reception to reporting of the final results – is more complex, but equally important.

Improving turnaround times is a key benefit of automation, but a holistic approach must be taken to avoid simply moving the bottleneck to another area of the laboratory. For example, the laboratory is also currently developing more automated sample reception and administrative processes as well as integrated sample sorting and worklisting via the hospital’s LIMS system.

One approach to further improving turnaround times is to eliminate the need for batch testing, and the laboratory has already developed a robust method that eliminates batch calibration of clozapine assays2. Rather than using manually prepared calibration standards at the beginning and end of every plate, the team has demonstrated that it is just as effective to perform internal calibration with three isotopically-labelled standards (two clozapine and one norclozapine) which can be easily identified by mass spectrometry.

A three-point calibration curve can then be generated for every sample injection, allowing results to be reported as soon as the individual analysis is complete, without having to wait for the whole batch to finish. This also has the benefit of allowing more reportable results per plate – going from ~65 to ~85 samples – reducing the overall cost per test compared to batch analysis.

Another option is to load the whole blood samples on to the platform following centrifugation of the primary sample tubes, rather than aliquotting plasma into the tubes currently used for clozapine analysis. This would save more time by eliminating a pre-analytical step, and could also take advantage of the liquid handling workstation’s barcode scanning capabilities, which would improve process security – by avoiding the risk of transcription errors – and provide full traceability for regulatory and quality control purposes.

Automation of the existing laboratory workflow is an obvious and necessary first step towards more efficient laboratory processes, but it is also important to recognise that traditional methodologies – whether they are performed manually or automated – may no longer be the optimal analytical solution.

Mass spectrometry technology, for example, has progressed at a tremendous rate over the last decade, with novel ionisation and isotopic analysis techniques now being regularly reported. Several of these new technologies have the potential to directly benefit pathology services, and the laboratory is continuously looking at ways to take advantage of these emerging technologies.

For the clozapine workflow, further investigation is under way to assess the possibility of ultra-fast analysis of prepared extracts. The relatively high concentration of clozapine in plasma samples, combined with the availability of isotopically-labelled standards and the ever-improving sensitivity and robustness of LC-MSMS instrumentation, should largely compensate for matrix effects, allowing very rapid chromatographic analysis or even flow-injection analysis.

The use of alternative ionisation approaches – such as laser diode thermal desorption (LDTD™) ionisation (Phytronix Technologies) – may also be a possibility, offering analysis times of just 10-15 seconds per sample. This, in combination with the automated sample preparation method, would enable 96 samples to be processed from start to finish in just over an hour.

Automation of the clozapine testing workflow is just one example of how embracing new technologies, such as the AC Extraction Plate, can offer huge potential time and labour savings for pathology services. The use of open architecture liquid handling workstations alongside the traditional diagnostics analysers and LC-MSMS can free up staff time to perform other activities or offer additional services, but also has the potential to significantly affect patient care pathways by allowing results to be reported within just a few hours instead of days.

The flexible nature of these liquid handling systems also raises the possibility of performing a wide range of assays – from clozapine and related antipsychotics to steroid analysis – on a single instrument, with reliable, walkaway sample preparation to ensure faster turnaround times and more consistent results. DDW

This article originally featured in the DDW Winter 2014 Issue

References
1 The AC Extraction Plate is for research use only, not for clinical diagnostics.