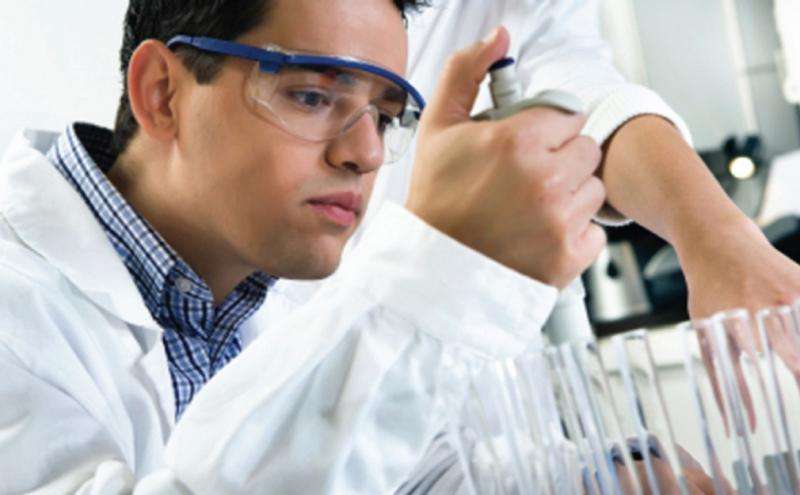 Acceptance of the personalised medicines paradigm is strictly dependent on this approach clearly benefiting patients with minimal effects on the actual delivery of healthcare.

The use of molecular diagnostics to predict how an individual will respond to a particular medicine, in terms of safety or effectiveness, offers considerable benefits over the current practices of prescribing and monitoring patient responses.

This brief article examines the real value of predictive tests based on molecular diagnostic technologies, in part by citing two cases studies, one examining drug safety and the other drug efficacy. However, the impact of present forms of disease management through molecular diagnostics also impacts on the requirements that may evolve in terms of future healthcare provision.

With the increasing number of ‘blockbuster’ drugs, ie, those individual entities that reach global sales of more than $1 billion per annum, being marketed and prescribed, it has become apparent that many of these drugs only benefit part of the intended patient cohort, with estimates suggesting that overall effectiveness ranges from 80% to as low as 20% depending on the disease area addressed (1). 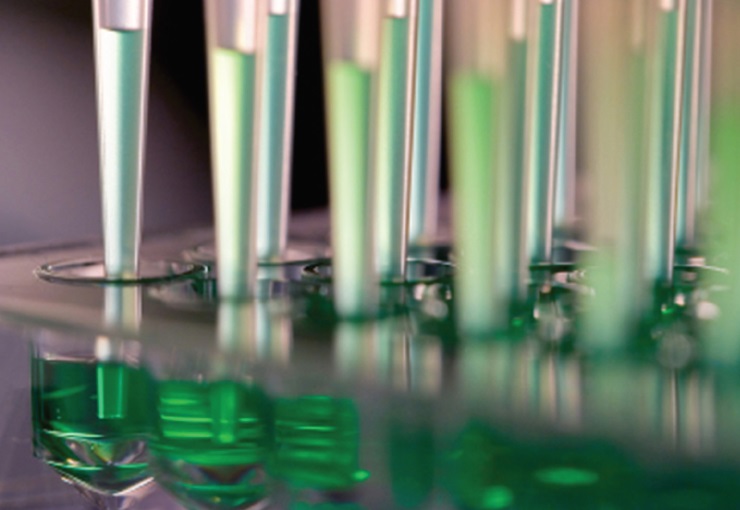 These observations about the relative effectiveness of medicines, equally fuelled by concerns about safety of medicines, the rising costs of supplying medicines and other macroeconomic factors affecting healthcare budgets, are leading to new models of how medicines are prescribed. Such new models of prescribing increasingly involve health technology assessments, undertaken by agencies modelled on the UK National Institute of Clinical Excellence (NICE) and now prevalent across Europe and the United States, two of the largest geographic pharmaceutical markets.

For example, two years ago, UK NICE ruled that the UK National Health Service (NHS) should only pay for a ubiquitin proteasome inhibitor, bortezomib (Velcade) when it had been proven effective, as measured by the response of a single validated biomarker, Serum M Protein (SMP) (2). There is now open discussion that this model of ‘proven efficacy preceding reimbursement’ is the preferred model for regulators, payors and healthcare providers in all major pharmaceutical markets.

What this model then does is to remove the perceptual barrier that protected the block-buster mentality and heralds the opportunity for segment-buster and niche-buster (3) medicines, ie, medicines based on higher response rates with minimised side-effects (Figure 1). 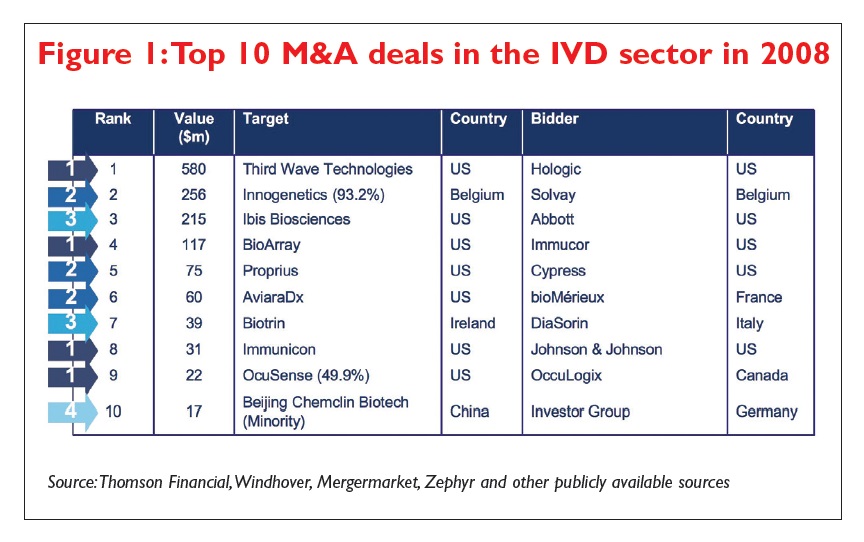 The segment-buster opportunity extends the healthcare tool-kit to include companion diagnostics and monitoring tests. Such tests will tend to use traditional diagnostic technologies based on protein and/or small molecule detection, although the increasing use of molecular diagnostics in nearer-patients settings may extend the tool-kit somewhat.

The niche-buster model is predicate upon the careful definition of the responder population during drug development and then the careful identification of individual responders in the marketplace; it is this predictive role that is a key benefit of molecular diagnostics in the personalised medicine offering.

Predictive tests (see Box 1 to understand the differences between prognostic and predictive tests) are now available for guiding the metabolic potential of individuals and the often-linked propensity to suffer serious adverse events, as well as tests that robustly identify those that are most likely to respond to specific medicines, either as individual entities (cetuximab) or as part of a specific drug class (EGFR kinase inhibitors) (5).

Case study examples of these types of tests – predictive tests of safety or effectiveness – are discussed in Boxes 2 and 3, by way of illustrating the real value that these tests offer. 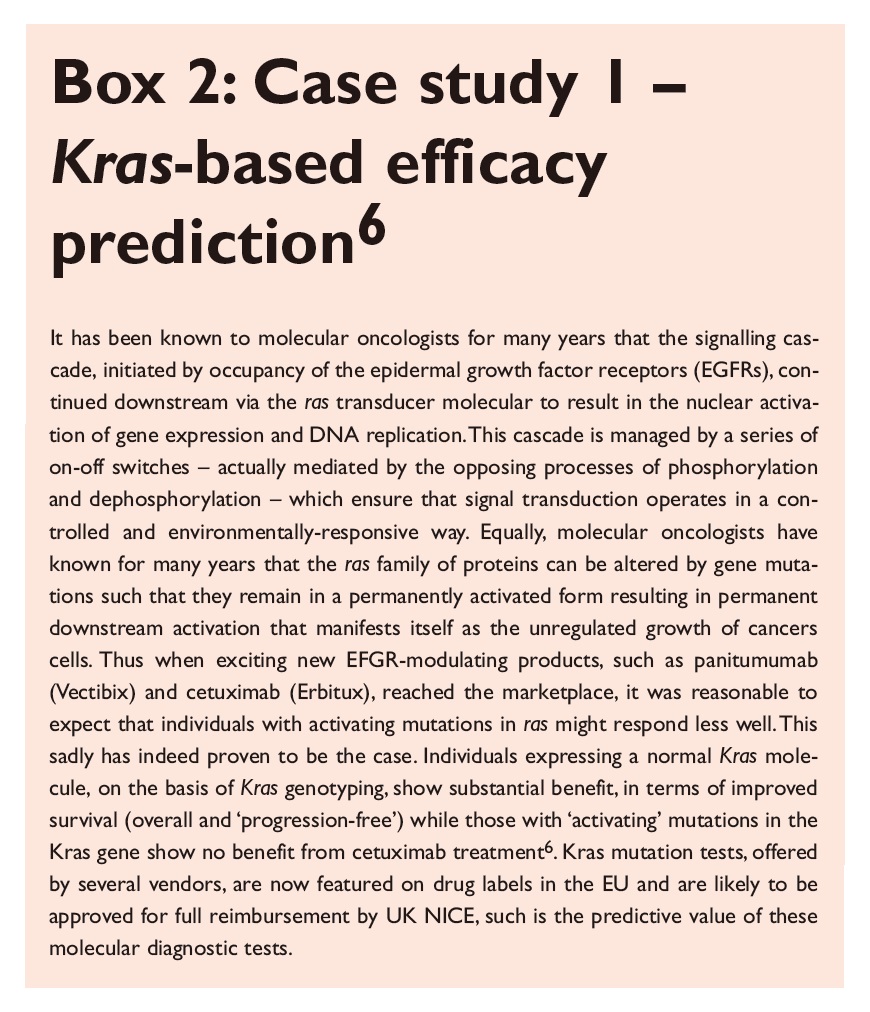 The role of molecular diagnostics in the future delivery of healthcare is not as simple as guiding the right treatment to the right patient at the right dose and at the right time, but also impacts on health economics by delivery benefit at the right price. As a general consequence, the prediction of response and the early treatment of disease is likely to have a more favourable outcome on the health to individuals.

This, however, has two long term effects: firstly, individuals may be on therapies for considerably longer treatment periods and, secondly, individuals are likely to stay functionally well for much longer. In terms of health economics, costs may well switch from expensive primary, secondary and/or tertiary care provision, such as hospital beds, mechanical interventions, etc, to the costs of providing long-term treatments to many more symptomatically well individuals.

In fact, the scenario above is one that many healthcare systems as moving to; they are supplanting symptom-based reactive medicine with objective testing-based predictive medicine.

Thus it is clear that molecular diagnostics tests as guides to prescribing tailored (or personalised) medicines have an impact way beyond the current scenarios described in Figure 1. Indeed, the use of molecular testing to offer better medicines at earlier times with more favourable outcomes may well have longer-term effects on societies as a whole.

Many healthcare commentators, particularly those with a predilection for the problems of the pharmaceutical industry, can get very pre-occupied by issues such as dry development pipelines, inexorably increasing costs for medicines R&D and the difficulties in getting medicines approved and reimbursed at an economically fair rate. However, the real challenges for the future of healthcare are readily summed up by two words – ‘ageing population’.

In almost all countries globally, life expectancy is increasing – driven in part by basics such as clean water, better sanitation and plentiful food supplies – with effective medicines playing a considerable role; at the same time the quality of life is not increasing (7). Indeed, in India, dietary changes are causing a huge rise in the levels of Type 2 Diabetes (T2D) and in China the affordability of cigarettes is seeding respiratory problems, particularly chronic obstructive pulmonary disease (COPD).

In Western populations, the management of previously lethal disease conditions, including some, but not all, cancers, is allowing all members of societies to live longer; however, the rise of degenerative disease, particularly associated with the central nervous system (CNS), is substantially reducing the quality of life in later years for many individuals. Thus some care must be taken in assessing benefit over perhaps inappropriately short timeframes. 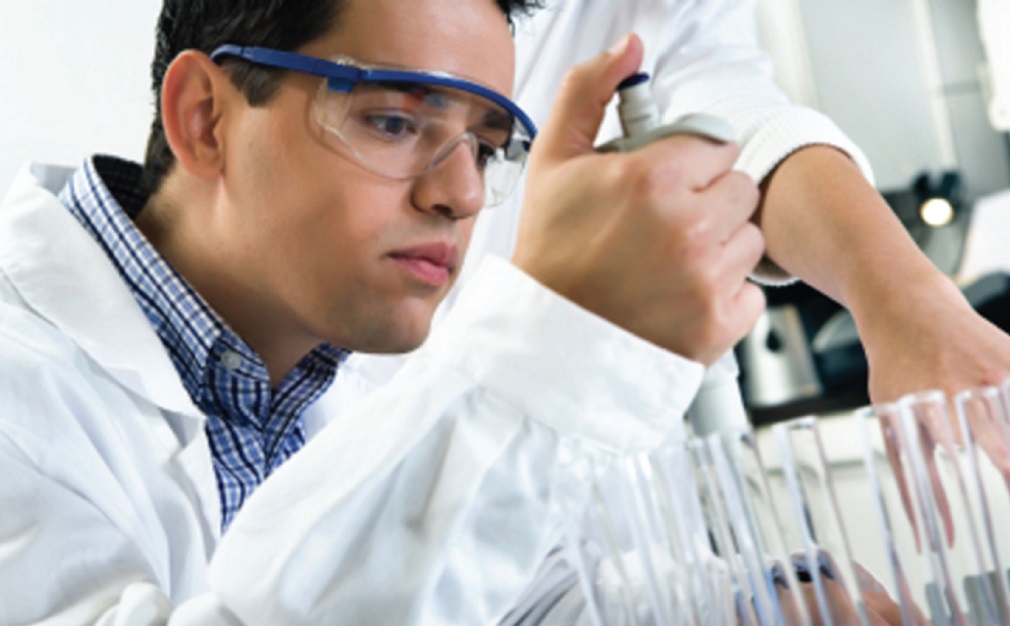 Rationally developed therapies used diligently in the healthcare marketplace can undoubtedly benefit society, and the role of good quality predictive and diagnostic molecular tests is unambiguously a great advance for pharmaceutical medicine.

The increased use of predictive tests will surpass the benefits already seen by traditional companion diagnostics to the point that earlier interventions will herald the rise of predictive medicines. However, disease will not become a thing of the past; disease will remain and will manifest in different forms from that observed and so-well managed today. It is clear that in ensuring a healthier future, we should be careful about what we ask for and be careful about what we deliver. DDW

This article originally featured in the DDW Fall 2009 Issue

Dr Eddie Blair is a MD of Integrated Medicines Ltd, enabling personalised medicines by combining diagnostic-type testing with new and existing medicines. He is non-executive director of IDS Holdings plc and a visiting scholar to the Cambridge University-MIT Masters Programme. He also lectures on personalised medicines and offers occasional bespoke courses based on his best-selling books. He has published more than 40 primary papers on the subject and is named inventor on a dozen patents.