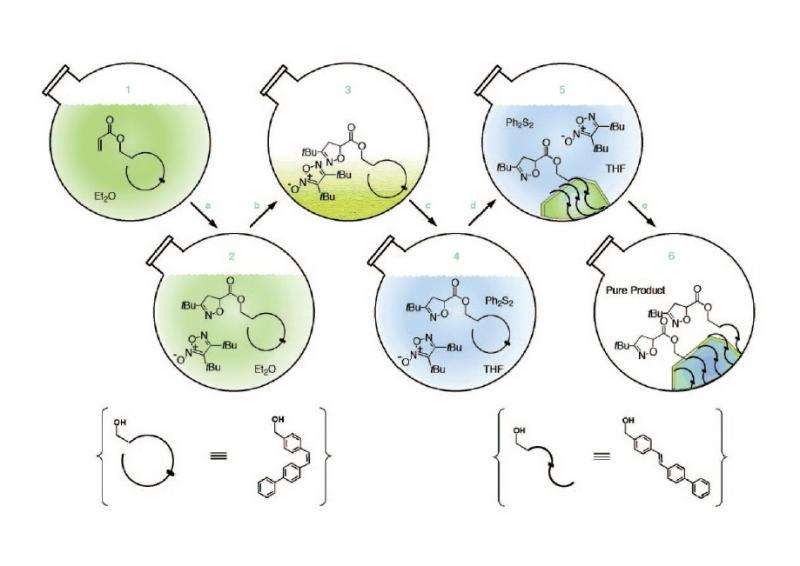 Part 1 of this article discussed the fundamental principles of the use of scavenging techniques in combinatorial and organic synthesis.

Part one of scavenger strategies is linked here.

The loading capacity is of considerable importance when choosing a scavenger resin for purification as higher loadings allow the use of less reagent which minimises cost. Therefore the search for higher loading alternatives that are cheap and easily handled has become increasingly important.

Furthermore the majority of polymeric scavenger reagents consist of reactive functional groups linked to poly(styrene-divinylbenzene) that require suitable solvents to swell the resin to access the reactive sites. Solvents with good swelling properties include DMF, dichloromethane and THF. Now a number of alternative resins exist that can be used with a broad spectrum of solvents.

Alternatives to polystyrene-based scavengers include ROMPGEL scavengers. Arnauld et al reported a ring-opening metathesis (ROM) polymer supported anhydride as a selective high-loading scavenger for amines and hydrazines (1). The ROMPGEL polymer is readily synthesised from commercially available and inexpensive materials. Ureas, thioureas, amides, sulfonamides, carbamates, imines and hydrazones were obtained in high purity and yield after sequestration of the excess amine by the ROMPGEL scavenger (Scheme 1).

Another report uses a macroporous, highly crosslinked poly(styrene-divinylbenzene) as a base matrix for solid phase scavengers (Scheme 2). This matrix is superior to Merrifield resins when nonwetting solvents such as acetonitrile are used. A 12-membered test library of sulfonamides was generated in high purity (2).

Bradley et al developed a route for the large scale preparation of magnetic, chloromethylated functionalised polystyrene-based resin beads for solid phase synthesis and reaction scavenging (3). The beads compared favourably with the standard Merrifield in several reactions and showed the same swelling properties. The magnetic beads were used as scavengers in the preparation of sulphonamides and were removed from solution with a small array of magnets.

Most recently, functionalised silica gels have proved to be attractive alternative scavengers. Modified silica gels produced by Silicycle (www.silicycle. com) and HP (combizorb) show a broad solvent compatibility, do not swell and are considerably less expensive than traditional polystyrene based scavengers. Amino silica gel has been used to remove excess acyl chloride in the synthesis of 2,9- disubstituted guanines (Scheme 3) (4). 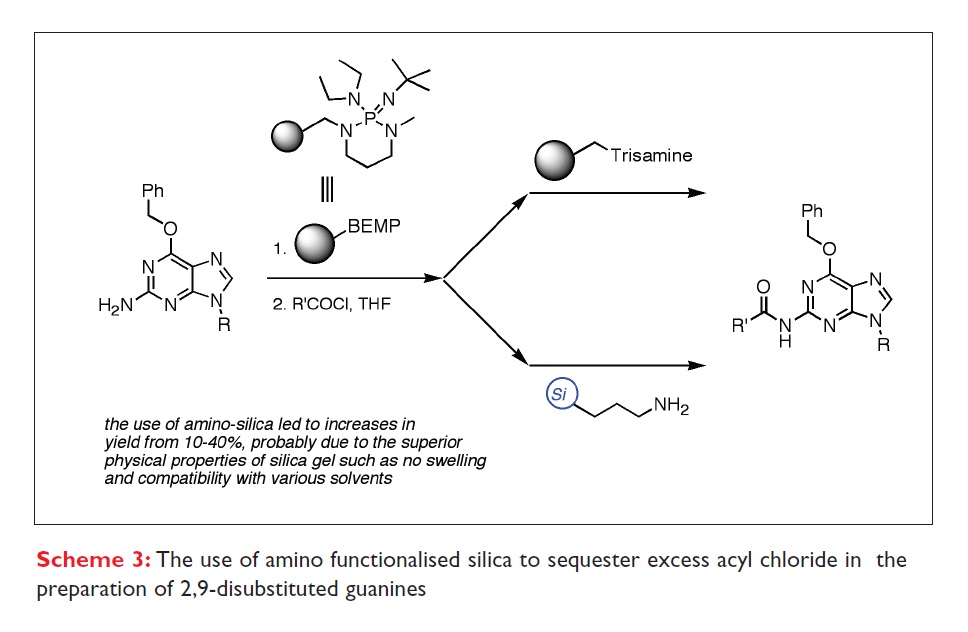 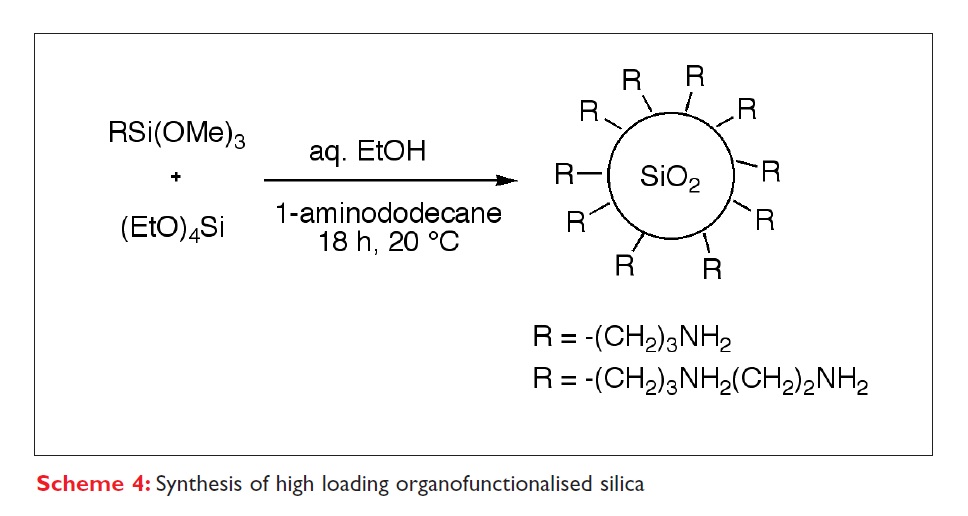 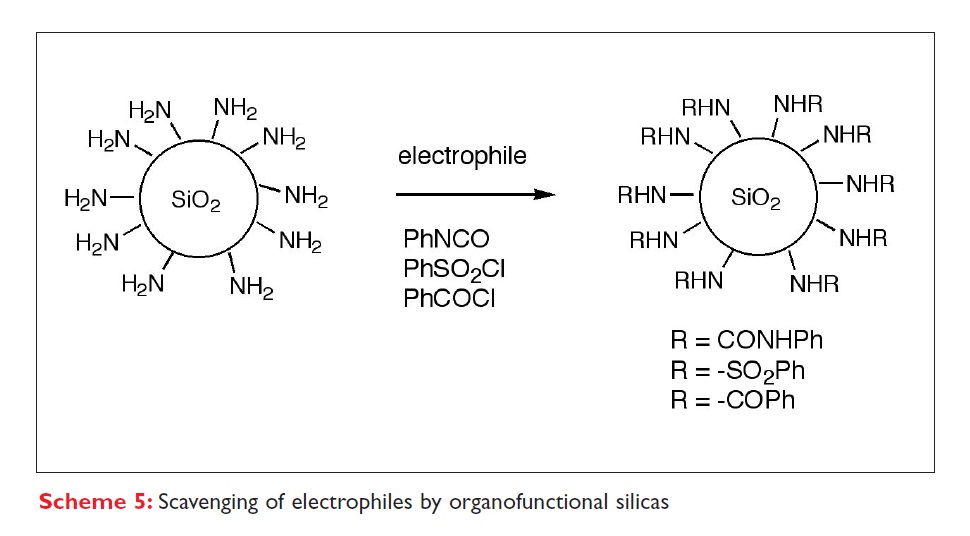 The development of a chemically relatively inert pyrene anchor with a reactive scavenger attachment allowed unreacted reagents and impurities to be removed from a reaction by adsorption of the PAHSR to charcoal and simple filtration (Scheme 6) (6). However, during this research the authors became aware of a sensitivity to the pyrene reagent that caused allergic dermatitis that was enhanced by sunlight. 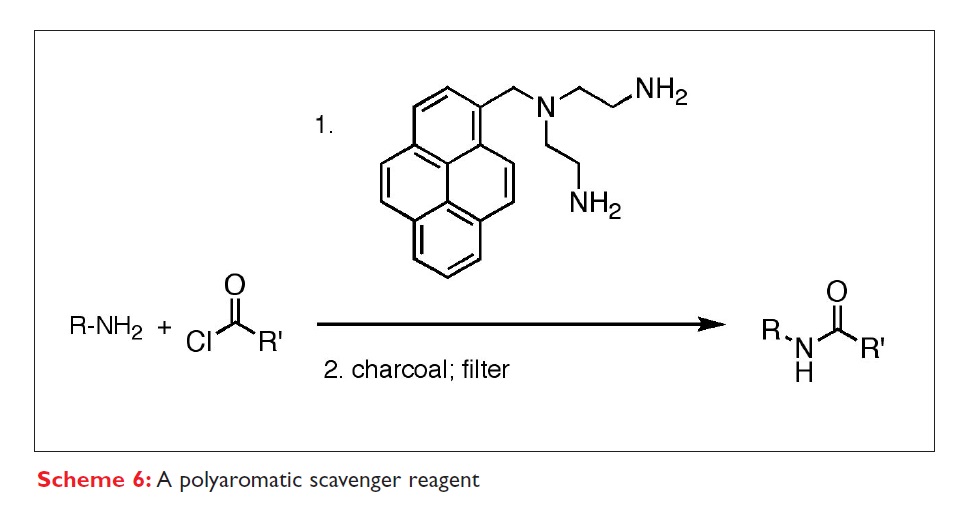 Atom transfer radical polymerisation (ATRP) provides a method for the controlled synthesis of polymers. One drawback however is the contamination of the polymer by ligand/metal when standard homogenous catalysis is used. Wilcox et al developed ‘Precipitons’ for copper catalyst removal in ATRP (Scheme 7, Figure 1) (7). 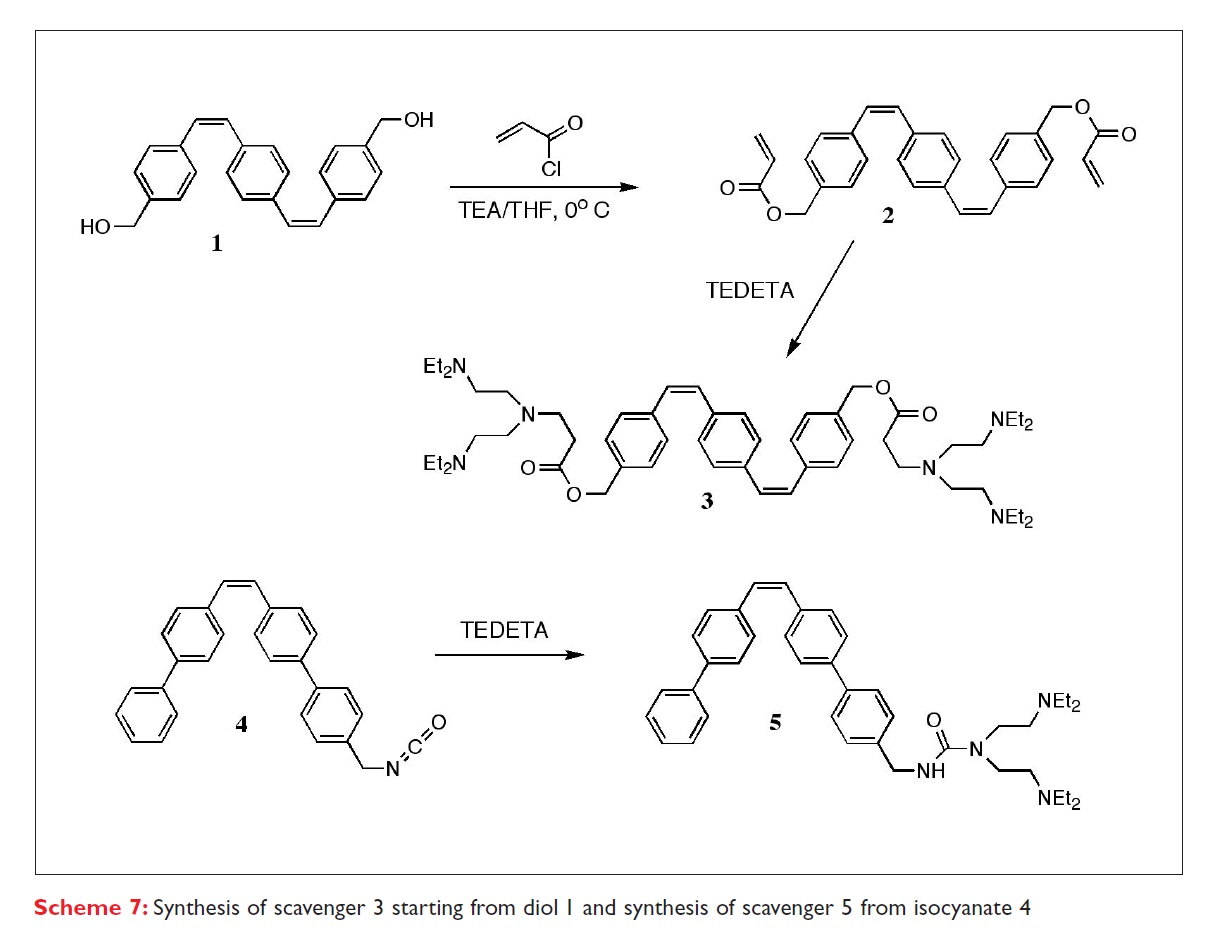 Precipitons are E/Z-isomerisable compounds that can be attached to a reactant. After the reaction is complete, they can be isomerised to cause precipitation of the attached product. Nitrogen ligands bearing Precipitons were prepared and used in ATRP. After polymerisation was complete, the polymer solution was exposed to UV light to precipitate the Precipiton lig-and/CuBr complex. However, the ligand in this system cannot be reused or recycled, further work to recycle the Precipiton would provide an attractive method for the removal of metals from ATRP systems. 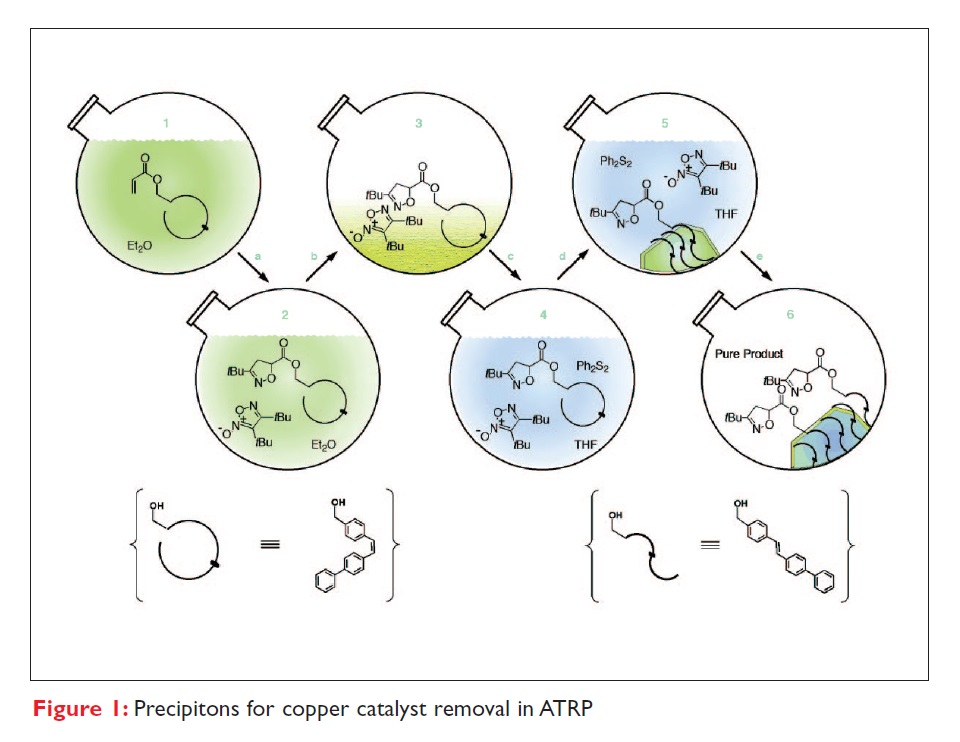 Ligands 3 and 5 were successfully used to remove CuBr. Upon completion of the polymerisation, the solution was cooled and exposed to UV radiation for two hours. The precipiton ligand precipitated and remained complexed with the Cu catalyst. The precipitated product can be isolated by decantation, filtration or sedimentation. The copper content of the polymer solution was determined by UV spectroscopy and indicated no detectable copper based on the lack of absorbance at 680nm.

The fluorous phase can be regarded as a third phase that is immiscible with both aqueous and most organic phases. Organic compounds are typically not soluble in fluorous solvents but can be rendered soluble by the incorporation of a fluorous tag. The purification is based on a fluorous/ organic liquid-liquid extraction. Curran et al reported the use of a fluorous amine scavenger in the automated solution phase parallel synthesis of a small library of ureas (Scheme 8). 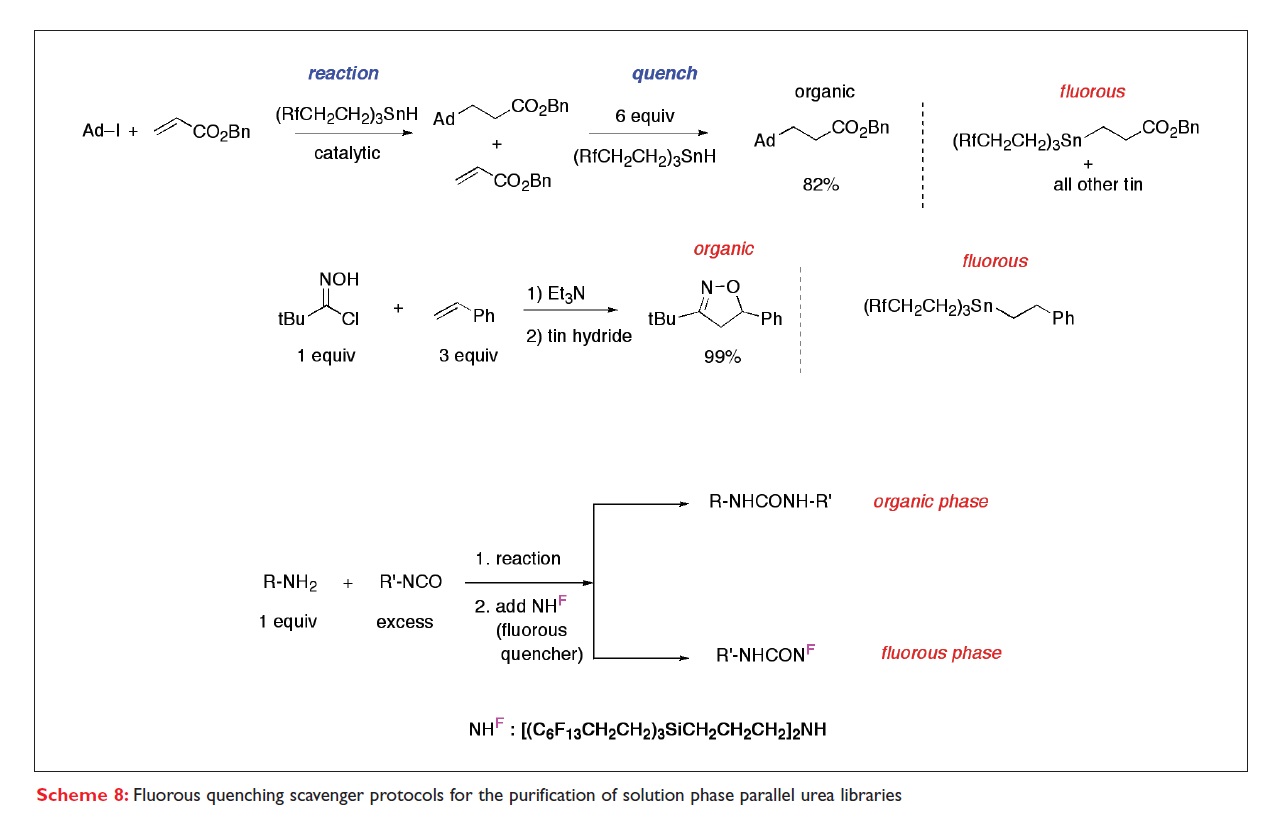 The ureas were synthesised from organic amines and excess isocyanates8. The fluorous amine scavenger sequesters the excess isocyanate and the resulting adduct is soluble in the fluorous phase that can be removed by a fluorous-organic extraction. The urea products were obtained in high yields and purities.

Fluorous trapping was used to streamline purification of the heterogenous multicomponent reaction products after the diversification step of the library synthesis to provide structurally defined mixtures. Subsequent biological testing warranted synthesis of the individual components with identification of some of the most potent synthetic curacin A analogues to date (Scheme 9). 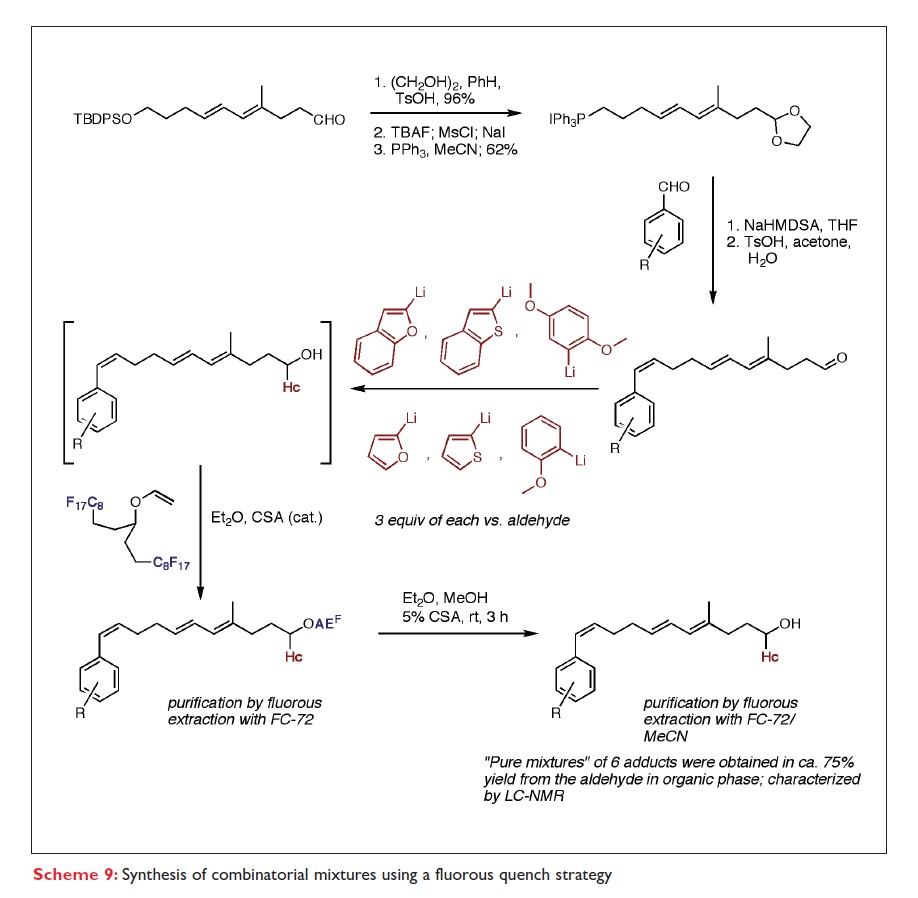 As scavenging techniques often require long reaction times due to the heterogeneous nature of the reaction conditions any technology that can speed up the process is of considerable interest. Surprisingly, there are relatively few reports of the use of microwave technology used in conjunction with scavenging techniques. However Kappe et al recently reported the solution phase synthesis of Nß-acylated dihydropyridines utilising microwave heating in both the synthesis and purification (scavenging) steps (Scheme 10) (10). 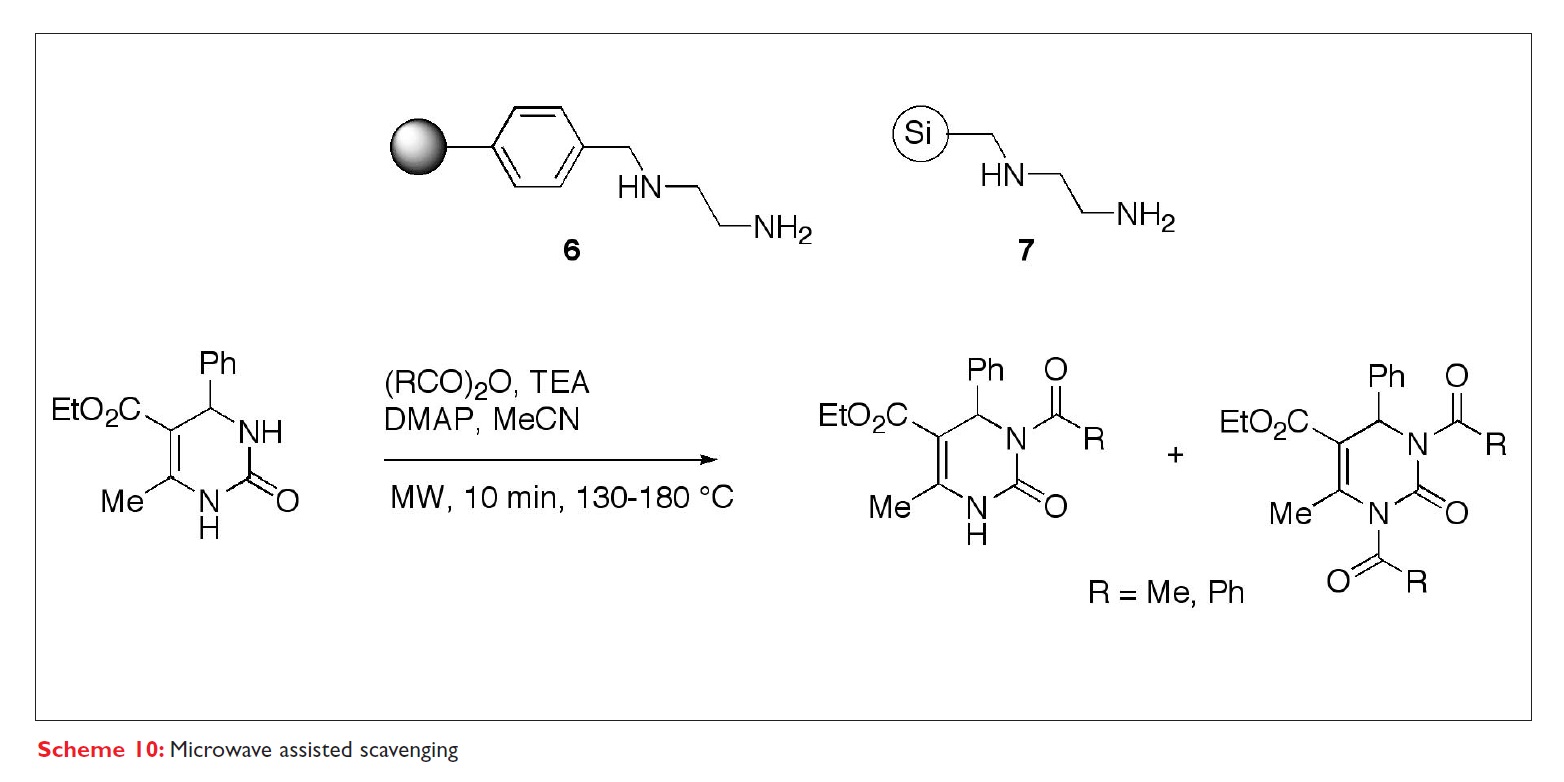 After microwave promoted acylation with excess anhydride in sealed vessels at 130-180°C in 10 minutes, the authors examined the use of polymer supported amine scavenging reagents to remove any remaining excess anhydride and bisacylated byproduct. The polymer bound diamine 6 and silica based diamine 7 were found to be similar in efficiency with the main advantage being the reduction in time required for excess anhydride quenching from 4-6 hours to 5-7 minutes.

While solution phase combinatorial chemistry is far from being optimised, the key to further improvements in efficiency is not to abandon it altogether but to combine the advantages of solution phase with those of the solid phase. Both the preparation stage, the planning of the synthetic strategy and the procurement and weighing of reagents, as well as the reaction workup stage are serious bottlenecks in high throughput synthesis. Due to the importance of purification techniques both for combinatorial chemistry and natural product synthesis, the development of general scavenging strategies will undoubtedly continue to be refined.

This will involve the development of higher loading, cheaper solid supported scavengers of alternative materials and physical forms. In conjunction with accelerated technologies including microwave protocols, the use of scavengers will ensure that purification of compounds will no longer be a major bottleneck in drug discovery projects. DDW


Acknowledgement
Support for our research programme in chemical methodologies and library synthesis by the NIH, in particular the NIGMS CMLD programme (P50- GM067082), is gratefully acknowledged.

Peter Wipf is Professor of Chemistry and Professor of Pharmaceutical Sciences at the University of Pittsburgh, USA. He also serves as the Director of the Combinatorial Chemistry Centre and the Director of the Centre for Chemical Methodologies and Library Development at Pittsburgh. His research interests are in the areas of natural product total synthesis, organometallic and heterocyclic methodologies, and combinatorial chemistry.

Claire Coleman obtained her PhD in 2003 with Dr Donal O’Shea at University College, Dublin, Ireland and is now a postdoctoral researcher with Professor Wipf at the University of Pittsburgh. She also serves as the Assistant Director of the Centre for Chemical Methodologies and Library Development at Pittsburgh. Her interests include natural product synthesis and microwave assisted combinatorial library generation.