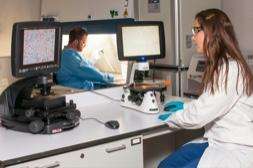 Scientists have revealed details of the discovery of a new cancer drug that could be used to treat a range of cancer types, including some blood cancers and solid tumours.

The drug, fadraciclib, was jointly discovered by scientists at The Institute of Cancer Research, London, in collaboration with the company Cyclacel.

It is already being tested in early clinical trials targeting select haematological malignancies and solid tumours.

In a new publication in the journal PLOS One, a team of scientists from Cyclacel and the Cancer Research UK Cancer Therapeutics Unit at The Institute of Cancer Research (ICR) describe the discovery of fadraciclib, formerly known as CYC065, and describe its mechanism of action and therapeutic properties.

Fadraciclib is a leading dual inhibitor of two cancer-driving proteins from the cyclin-dependent kinase (CDK) family, CDK2 and CDK9.

It was designed by improving the chemical properties of a previous CDK inhibitor drug from Cyclacel, called seliciclib, on which the ICR and Cyclacel had collaborated previously.

These structural design modifications led to a 20-fold more potent activity against the CDK2 and CDK9 targets and an equivalent 30-fold increase in therapeutic potency against a panel of human cancer cells, as well as a high degree of selectivity versus a wide range of 256 other protein kinases.

The researchers also provide clear evidence that CDK2 and CDK9 are inhibited in fadraciclib-treated cancer cells, leading to altered gene expression and cell death by apoptosis.

In the published research, which was largely funded by Cyclacel, the researchers also describe experiments in cells and mice that demonstrate fadraciclib’s potential as a treatment for leukaemia. The team found that fadraciclib inhibited the growth of human acute myeloid leukaemia tumours growing in immune-deprived mice by up to 100%.

A particularly important effect that the researchers observed in cancer cells treated with fadraciclib was a profound and sustained decrease in the levels of MCL1 – a protein involved in cancer cell survival and drug resistance. To exploit this effect further, they evaluated fadraciclib in combination with drugs that target other cancer survival and drug resistance proteins in the BCL2 family and observed synergistic anticancer activity.

The results are consistent with a 2018 study led by ICR researchers that showed the similar beneficial activity of a close analogue of fadraciclib – a molecule with a similar structure also arising from the collaborative research programme – in combination with a BCL2-targeting drug against bowel cancer cells.

In the new paper the researchers also found an association between sensitivity to fadraciclib and levels of the MCL1 and BCL2 proteins in cancer cells, and also the presence of ‘rearranged’ copies of a gene called MLL (mixed lineage leukaemia), which is often co-opted in blood cancers to drive the production of other cancer-causing proteins.

All of these factors could be tested in patients as potential biomarkers to help select those most likely to benefit from the drug, the scientists believe.

In addition to the promise in leukaemia, the researchers observed beneficial activity for fadraciclib against human breast cancer cells. This was again associated with a reduction in the expression of MCL1 and the important oncogene MYC.

Fadraciclib is currently undergoing Phase I clinical studies as a single agent in patients with advanced solid tumours, and also in combination with the approved BCL2 inhibitor venetoclax in relapsed or refractory chronic lymphocytic leukaemia and relapsed refractory acute myeloid leukaemia or myelodysplastic syndrome.

Fadraciclib is one of 20 drug candidates discovered by scientists at the ICR since 2005, of which 10 have entered clinical trials – making the ICR the most successful academic centre in cancer drug discovery in the world.

The ICR is building a new drug discovery centre, the Centre for Cancer Drug Discovery, to create more and better drugs for cancer patients and with a particular focus on overcoming cancer evolution and drug resistance through the creation of new molecularly targeted drugs and mechanism-based drug combinations – an approach exemplified by the discovery of fadraciclib and its evaluation in mechanism-based combinations.

The long-running successful collaboration with Cyclacel is an example of the ICR’s success in working with companies to discover and develop innovative cancer treatments. The ICR is currently collaborating with around 100 companies, and regularly ranks amongst the world’s top academic institutions in measures of collaboration with industry.

Study co-author Professor Paul Workman, Chief Executive at The Institute of Cancer Research, London, said:“It’s exciting to reach the stage where we can reveal for the first time the chemical structure and synthesis of fadraciclib and also describe its therapeutic properties, especially in cell and mouse models of human leukaemia.

“These new results are part of the successful programme of research with our partners at Cyclacel to discover and develop dual CDK2/9 inhibitors for cancer treatment. It details research that has already led to clinical trials of fadraciclib in various cancer types, and we hope will result in new targeted treatments for patients with leukaemias and solid cancers.”

Spiro Rombotis, President and CEO at Cyclacel Pharmaceuticals, said: “The fadraciclib paper is the culmination of a productive collaboration of Cyclacel and the ICR in cell cycle biology over several years. The main objective of the collaboration was to discover, develop and characterise novel, transcriptionally active CDK inhibitors with improved properties over earlier generations of such medicines.

“Initial results from clinical trials of fadraciclib as a single medicine in patients with advanced cancers have shown durable partial response, tumour shrinkage and proof of mechanism vindicating the scientists’ efforts.”