The market for RNA purification products and services 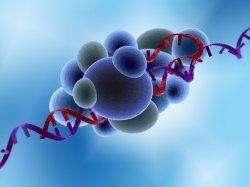 The market for RNA purification products and services

Purified RNA is crucial for use in a range of downstream applications performed by life scientists, most notably reverse transcription PCR (RT-PCR), quantitative real-time PCR (qPCR) and cDNA synthesis.

RNA purification is an area of particular salience for life science suppliers, as the successful extraction of RNA poses not only technical challenges to researchers, but also commercial challenges of a heterogeneous marketplace due to variation in end users’ sample sources, level of throughput and downstream applications.

On one hand, the need to quickly and consistently obtain pure RNA generates a demand for the convenience and quality results of commercial offerings; on the other hand, the diversity of research needs fragments the potential customer base. Furthermore, researchers often develop in-house or ‘homebrew’ purification methods because there is not a suitable commercial offering to fit their particular experimental requirements. Suppliers face the strategic imperative of ascertaining the appropriate product mix between breadth of product line and depth of coverage across varied sample types.

The optimal product portfolio accounts for not only researchers’ current utilisation patterns, but also the coverage and entrenchment of competitors’ products as well. Finally, a product portfolio must be built with a look towards future growth – including growth from increased throughput of current end-users, new entrants to the field of RNA purification and finally, conversion of users of homebrew methods. The RNA Purification Market: Evaluating Competitive Dynamics & Establishing Benchmarks, a report released in May by market research firm BioInformatics, LLC (Arlington, VA), surveyed 813 scientists who currently perform RNA purification.

This report provides life science suppliers with a comprehensive assessment of RNA purification practices, with a strong emphasis on what influences a researcher to utilise commercial offerings and/or homebrew techniques. An appraisal of product attribute preferences coupled with supplier satisfaction and loyalty analysis provides insight into market dynamics. In summary, this report will help suppliers of RNA purification kits and reagents assess opportunities to expand their reach into additional markets.

Almost all respondents who purify RNA currently purify total RNA, followed by 45% who purify poly(A) mRNA. Suppliers offer a multitude of products designed for total RNA purification, and many offer products for purifying poly(A) mRNA from total RNA or directly from cells or tissue. While total RNA and poly(A) mRNA are the types of RNA most commonly purified, several other types of RNA are also purified, including viral RNA, micro RNA, ribosomal RNA and small RNA. Suppliers may choose to differentiate themselves by expanding their product lines to provide purification products specific for these niche types of RNA.

Respondents most commonly use their purified RNA for RT-PCR, qPCR and cDNA synthesis. Both of these PCR applications are very sensitive and require extremely pure RNA (ie, RNA with no protein or DNA contamination), thus presenting a challenge for suppliers to create products that will satisfy this demand for increased purity. As one respondent explained, purification products “have become much better recently; however there is still a problem with DNA contamination. As techniques become more sensitive (such as real-time PCR), it will become easier to detect such contamination and more importantly, that it is absent. It may be acceptable to have a lower overall RNA yield to decrease the amount of DNA present.”

Almost half of all the samples from which RNA is purified are either established cell lines or animal tissue. The balance of the market is fragmented among several different sample types; such diversity associated with sample types can provide an opportunity for supplier differentiation, a key to success in this crowded marketplace. For example, a supplier may choose to emphasise their expertise in purification kits for the most frequently used type of sample, and place less emphasis on those products optimised for a specific sample type. Alternatively, a supplier may choose to take the opposite tack and focus on a sample type that may be used less frequently by researchers in general, but employed extensively by customers in certain niche markets.

Sample source affects final yield because of the varying degrees of difficulty of extracting RNA from different sample types. Commercially available purification products are designed to accommodate a wide range of sample sizes, and encompass the amounts most frequently cited by survey respondents – 106 cells, 2 to 25mls or 2 to 25mgs of tissue. Overall, survey respondents report obtaining yields that are lower than what suppliers claim is possible for their products. This may be a result of the technical complexity involved in RNA purification, the variety of starting tissues – each with a different expected yield – and the difficulty of training personnel in this technique.

High throughput users are of value to suppliers 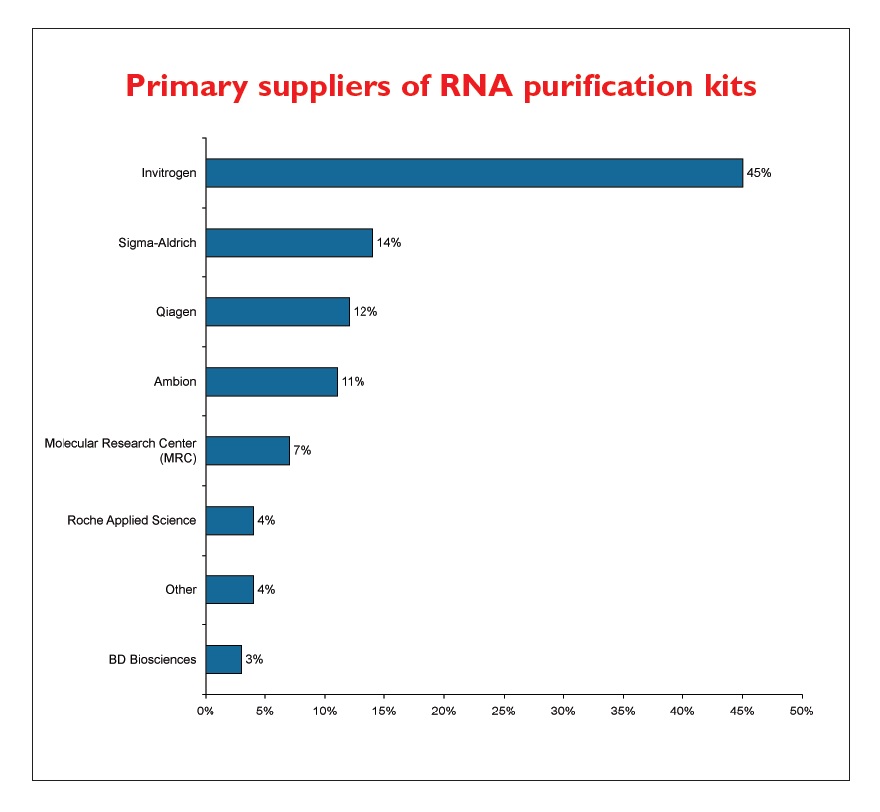 High-throughput users include respondents who purify RNA from the less common sample types, including non-human blood and/or blood-derived samples, cultured plant cells, formalin-fixed, paraffin embedded tissue and primary cell. Such high-throughput users who employ these less common samples are the most likely to expect an increase in the number of samples purified in the next 12 months. This presents suppliers who make purification products for these niche markets with an opportunity to expand their sales, either by selling more units or by making purification kits with an increased sample capacity (eg, 96 or 384 well capacity). 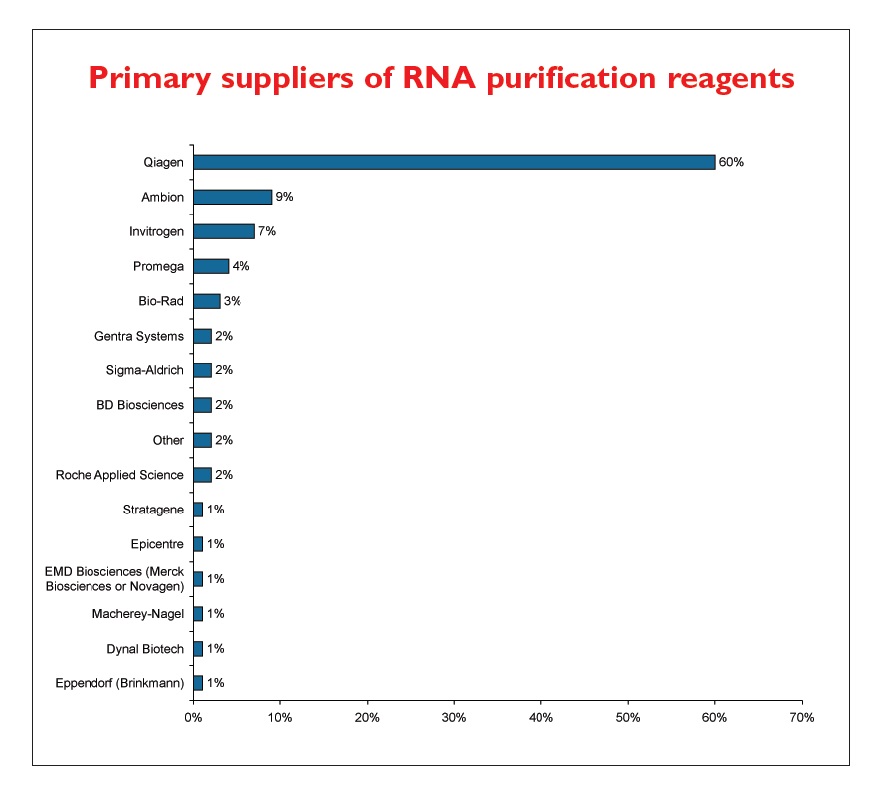 Greater use of commercial offerings than homebrew 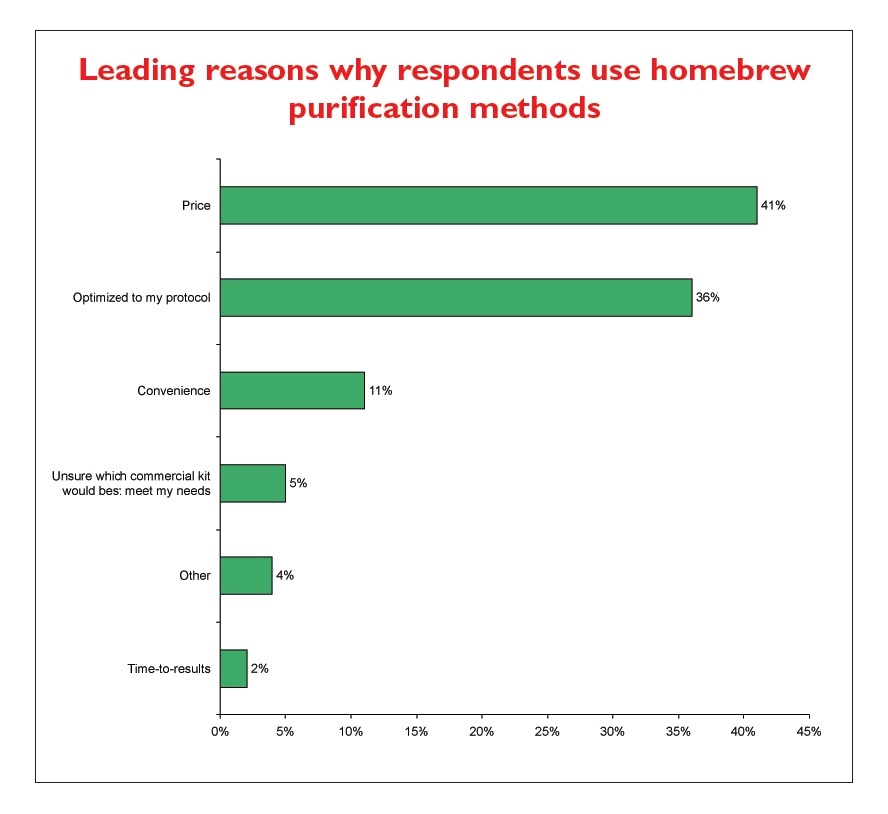 Respondents utilise commercial kits to isolate 46% of the total number of RNA samples purified. Qiagen is a strong leader in commercial kits for RNA purification – 60% of respondents name Qiagen as their primary supplier as compared to the second and third most frequently mentioned suppliers Ambion and Invitrogen, with under 10% response rates respectively.

Competitive strategies that other suppliers of RNA purification kits could explore to gain market share include:

Respondents who use commercial kits for RNA purification are highly satisfied with kits purchased from their primary supplier. When asked about the opinion of their primary supplier, collectively they give their suppliers a mean score of 5.91 (on a seven-point scale with 7= very positive and 1 = very negative). Satisfaction scores are, for the most part, very similar among the most frequently selected suppliers (ie, Qiagen, Ambion and Invitrogen).

When asked about intention to purchase RNA purification kits again from their primary supplier, 44% of respondents stated they are “very likely” (a score of 7 on a seven-point scale where 7 = very likely) to purchase again.

Respondents utilise commercial reagents (eg, TRIZOL ®, TRI Reagent®, etc) to purify 42% of the total number of RNA samples purified. Invitrogen has a definite leadership position in commercial reagents for RNA purification – 45% of respondents selected Invitrogen as their primary supplier as compared to the next most frequently mentioned suppliers Sigma-Aldrich, Qiagen and Ambion with under 15% response rates respectively.

Preferences and satisfaction levels for the RNA purification reagent market

Similar to kit users, respondents who use commercial reagents are quite satisfied with the final output of their purification procedure. Even though the satisfaction scores are fairly high for all aspects surveyed, the relative dissatisfaction with speed and throughput presents opportunities for suppliers to differentiate their purification reagents.

Respondents who use commercial reagents report a high degree of satisfaction: when asked about the opinion of their primary supplier, collectively they give their suppliers a mean score of 5.74 (on a seven-point scale with 7 = very positive and 1 = very negative). When asked future purchases of RNA purification reagents, 41% of respondents stated they are “very likely” (a score of 7 on a seven-point scale where 7 = very likely) to purchase again from their primary supplier.

“Price” and “optimised to my protocol” are the two main reasons respondents use homebrew methods instead of commercial offerings. Researchers are often compelled to use methods developed in-house because there are no commercial alternatives available, they have unique experimental requirements or they are forced to use the same protocol in order to compare results across experiments.

Suppliers of RNA purification products face many challenges – both technical and commercial – in this crowded marketplace. Technical challenges include designing products to purify RNA from a wide variety of sample sources while at the same time maintaining a high level of purity required for downstream applications. The number of competitors in the market presents a commercial challenge, as does deciding upon the proper product mix of kits, reagents and components of homebrew – and in which segments of the market to compete. Respondents use a mixture of purification approaches in their research, and experimental parameters often vary according to the combination chosen.

RNA purification is often considered a mature market because it is at a technological equilibrium: no technological breakthroughs or innovations have occurred in recent years. This presents suppliers with the difficulties of marketing a mature product. Given technological parity, suppliers should focus their marketing message on attributes other than the latest incremental technical innovations. The strength of their respective brands is key to the current success of the leading suppliers.

In this competitive and often technologically undifferentiated market, suppliers are generally not competing solely on the basis of price because the prices of kits and reagents are similar among suppliers (pricing as based on starting sample size). Suppliers should find another way in which to compete – for example, by highlighting areas of expertise (eg, expertise in blood purification products) or by improving one of the important product attributes with which respondents are less satisfied – such as speed, throughput and yield – and then promoting this upgrade in performance. Finally, suppliers can differentiate themselves through exemplary technical service and customer support.

While RNA purification products constitute a challenging marketplace in which to compete, it also presents suppliers with several opportunities with which to extend their reach. One such opportunity is cross selling products, ie kit and reagent suppliers would also offer components of homebrew and vice versa. A second opportunity for suppliers is to capture new entrants to the market by understanding their needs and properly focusing products and marketing to reach these new entrants. Finally, converting homebrew users – whether they exclusively use homebrew or use it in combination with commercial offerings – to increased or exclusive use of commercial products presents an opportunity for suppliers. Suppliers can appeal to homebrew users by addressing their areas of significant dissatisfaction – ease-of-use, yield, DNA contamination and speed – and demonstrating convincingly that their commercial offerings overcome these issues without compromising experimental outcomes. DDW

As a science analyst, Dr Cynthia Beam is involved in various aspects of market research studies – from questionnaire development to analysis of the results – for both Bioinformatics’ published reports and those commissioned by clients. Cynthia received her PhD and her MS in Molecular and Cell Biology from Brandeis University. While studying at Brandeis University, she mapped out pathways of DNA recombination and repair in the bacterium Escherichia coli.