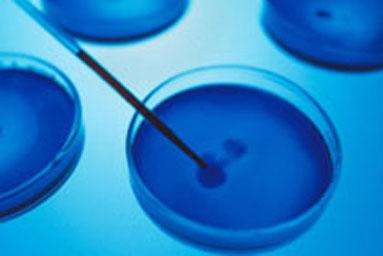 Universities and federally funded laboratories create thousands of new discoveries every year, the vast majority of which never see the light of day. We discuss various ways to harness those discoveries and potentially invigorate product pipelines.

Invention is a sticky, unpredictable business. The goal of every basic research programme is to objectively answer questions aimed at uncovering or advancing knowledge and practice. Basic research has an obstinate way of taking longer and costing more than usually imagined for a good reason. Most research projects do not work.

Additionally, research timelines are notoriously long; often require large fixed capital and manpower investments and if that weren’t enough, under GAPP expenditures for basic research programmes are for the most part expensed as incurred. So much for managing for results.

Not invented here is good

There exists another type of outsourcing, one that seeks to neutralise the risks and costs of corporate invention by replacing it or augmenting it with university and federal laboratory innovation. Financially, this results in spreading the cost of invention over a larger group of stakeholders, ie, the US taxpayers and the institutions whose research they support. From an innovation perspective, it is hard to match the thousands of universities and federally funded laboratories as potential sources for new discoveries.

According to the Association of University Technology managers (AUTM.net), in its last reported study of university research discoveries in North America, the top schools received more than $40 billion in research funding and this resulted in about 17,000 new discoveries (approximately 325 per week). According to a recent book entitled Technology Transfer for Entrepreneurs (Gross & Allen), “Many companies could significantly enhance their new product pipeline and create a marketplace advantage by tapping university discoveries.”

The authors believe that “Not invented here” is probably the best thing that could happen to a company. Just look at Genentech, which acquired its core technology (recombinant DNA- Gene Splicing) from Stanford University and subsequently developed an industry or Netscape which acquired Mosaic for X (first web browser) from University of Illinois.”

Technology companies need new discoveries to invigorate their product pipelines. Yet the cost of a basic research programme is formidable and its value is difficult to assess. In addition, technology development cycles are long and often fraught with setbacks and disappointments. For public companies this is particularly difficult because a company’s value is largely based on the strength of its technology franchise. To enhance company value, management must identify alternative sources for innovation.

From another perspective, it has been well documented that the majority of innovations developed at universities and federal laboratories never reach the marketplace (1). This is a profound waste of the intellectual capital produced by some of the most creative scientific minds in the world. To address this two-fold problem, we have developed a new model for technology transfer called U2B2. In essence, it states that to facilitate technology transfer, a financial instrument is needed that can monetise the present value of intellectual capital in the form of common stock or another equity instrument.

U2B technology transfer bridges the gap between basic research and marketplace commercialisation. To allow for the systematic closure of technology transfers, it is helpful for both the buyer and seller to value technologies with a common currency. This enhances the potential for creating an efficient market between producers and purchasers of intellectual capital in much the same way that a mortgage helps to create an efficient market between buyers and sellers of real estate.

An initial premise of this U2B intellectual-capital-toequity exchange is that technology transfer must be market driven to enhance efficiency. Therefore, an entrepreneur should start with a well-defined technology acquisition need. Once a profile is constructed describing the type and state of development of the technology needed, an experienced technology transfer company can supply this profile with some of the many technologies available for license from federal laboratories and research universities.

A second premise is that companies need to minimise invention risk to maximise shareholder return on equity. Invention risk is defined as the total cost of the invention process, including capital, manpower and equipment. Most basic research programmes do not result in the development of breakthrough technologies. Therefore, it is difficult to determine a priori the financial outcome of a basic research programme. In contrast, outsourcing often produces a higher or better-understood rate of return on investment, when compared with deploying capital in-house in a non-core area. 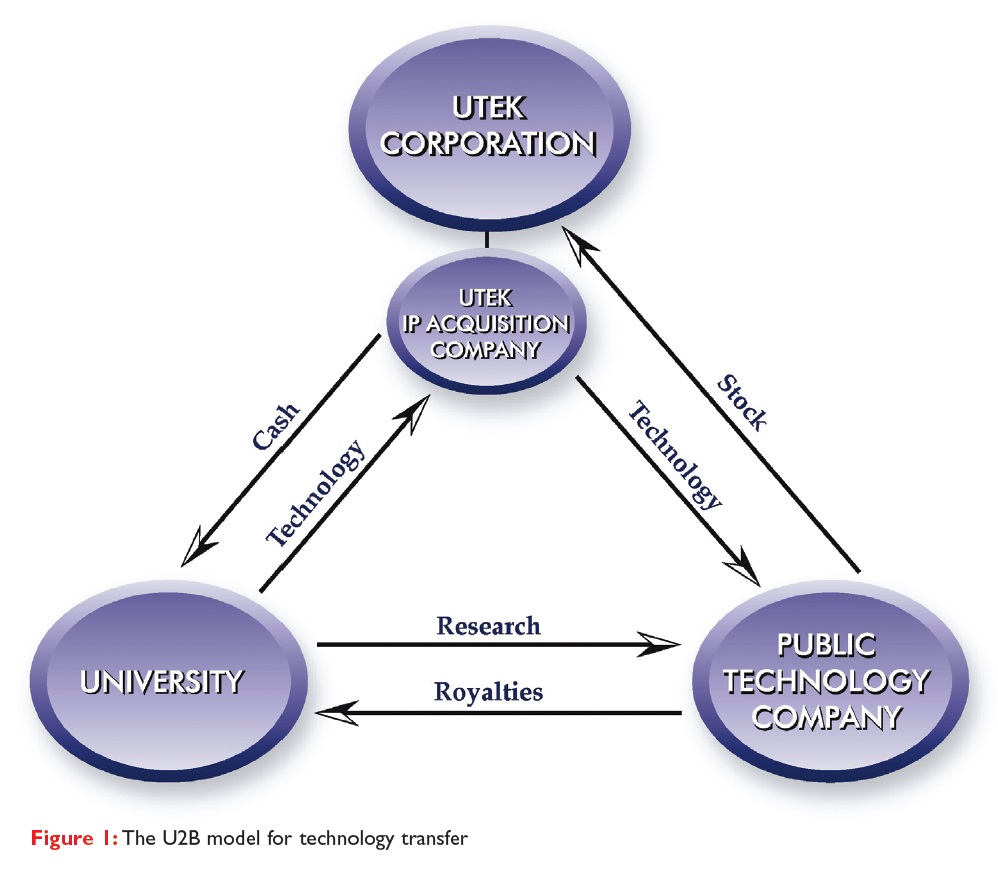 This is a stock-for-stock exchange, whereupon all of the shares of the portfolio company are exchanged for a mutually agreed upon number of shares of the technology company. To obviate the build-up of inventory of depreciating assets (such as technology licences), it is best to envision the U2B exchange as a ‘just-in-time’ exchange of intellectual capital for acquirer company shares. The portfolio company contains the licence to the intellectual property of interest, and therefore the ownership of this licence is in effect transferred to the public technology company at the close of the transaction.

In addition to the licence agreement, the portfolio company may contain other intellectual-capital assets that the parties desire to transfer, such as a sponsored research agreement, a consulting agreement, a material transfer agreement, real property or cash. At the close of the transaction, 100% of the licence royalties are paid to the research institution by the public technology company.

In practice, consideration paid to a university or federal laboratory for the acquisition of a technology licence may also, in whole or part, be made in the form of equity depending upon the risk tolerance or applicable laws guiding the university or laboratory. In our experience, technology transfers are substantially facilitated by the U2B model. We have applied this model successfully to close technology transfers from both universities and federal laboratories to high-technology companies. In using this model, some common features emerge:

– Intellectual capital may be acquired using common stock as a currency.

– Intellectual capital may be acquired in a profitable manner, with the assistance of a technologytransfer company, without imposing a sharing of royalties on the inventing institution. Rather, the U2B equity model uses corporate equity to finance the transfer of intellectual capital.

In the U2B model, technology transfer is structured as a ‘mergers and acquisitions’ transaction, which we believe more fairly accounts for the present value of the technology being acquired on a company’s balance sheet. Also, according to generally accepted accounting principles (GAAP), research and development costs are required to be expensed as incurred, the near-term effect of which is the reduction of operating income.

In contrast, the outsourcing of research with the U2B model structures the technology transfer transaction as a stock-for-stock acquisition; therefore the value of the acquisition may be capitalised based on the value ascribed to consideration provided (stock). The net effect is that a technology licence acquired through the U2B model strengthens the balance sheet by the value of what is acquired. Similar to the effect of using shares to purchase another company. Therefore, outsourcing basic research may enhance both corporate intellectual capital and the asset value of an organisation immediately after it acquires a licence.

In summary, U2B is the first just-in-time technology- transfer tool that empowers companies to grow their intellectual capital in exchange for common stock without diminishing the inventing institution’s royalties. This tool has the potential to increase the value of a wide range of companies by allowing them to outsource basic research to taxpayer-funded research institutions and finance this outsourcing with the one currency that most growing companies are long in: their common stock. DDW

Dr Gross serves as Chief Executive Officer and Chairman of the Board of Directors of UTEK Corporation. He previously held the appointment of Research Professor and Director of the Center for Product Ergonomics at the University of South Florida. In 1984, he founded the Biomechanics Corporation of America and served as its CEO until 1995. Before this he held positions as Acting Director of the Graduate Program in Ergonomics and Biomechanics at New York University and Chairman of the Department of Biomechanics at New York Institute of Technology. Dr Gross has received 18 patents and has produced numerous publications. His most recent book, co-authored with Joe Allen, entitled Technology Transfer for Entrepreneurs (Praeger Publishers, December 30, 2003) describes how companies can utilise federal laboratory innovations to invigorate their product offerings and strengthen their core technology. Dr Gross founded UTEK Corporation to help accelerate the growth of technology companies with new university and federal laboratory discoveries. Dr Gross received his Master’s and PhD degrees from New York University.