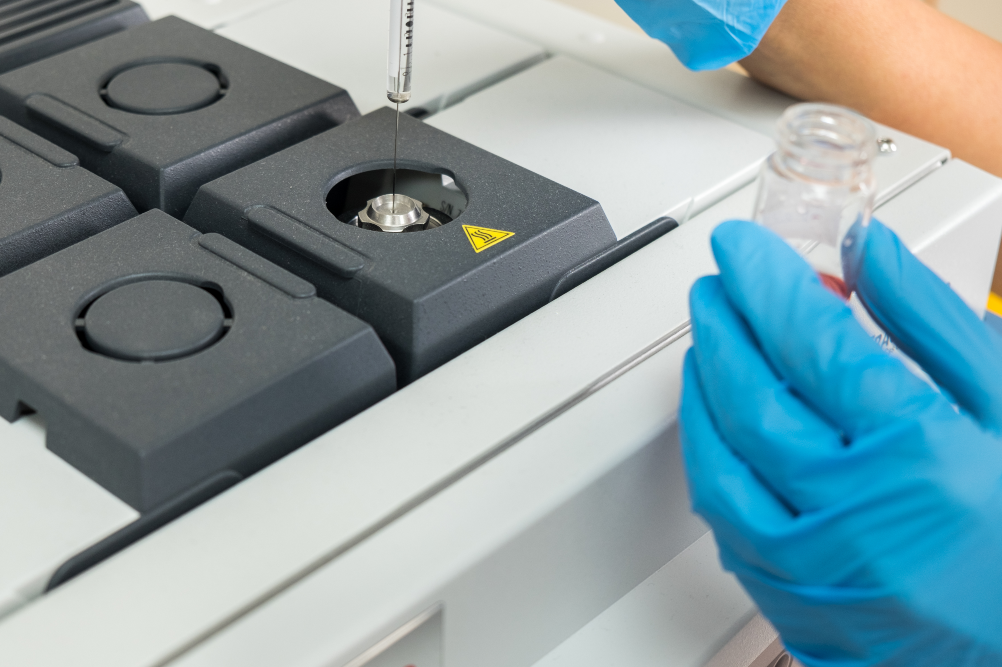 Mass spectrometry (MS) is now widely used in protein biochemistry and proteomics to identify and characterise proteins, with technology constantly evolving to achieve higher depths of coverage, speed, and sensitivity. For example, tandem mass spectrometry (MS/MS) is a sensitive, accurate, and efficient method for sequencing peptides via the generation and detection of sequence-specific fragment ions1. It is also a helpful tool for interrogating proteins for post-translational modifications (PTMs), to elucidate the intricate processes that govern cellular events, like cell division, growth, and differentiation. Traditional methods for analysing PTMs, such as Edman degradation, amino acid analysis, isotopic labeling, or immunochemistry, often lead to incomplete amino acid sequence coverage and leaves questions remaining about the crosstalk and selectivity of different PTMs and their impacts on cellular regulatory networks.

Protein phosphorylation is one of the most abundant forms of reversible PTM and plays a vital role in various cellular processes, such as protein synthesis, cell division, signal transduction, cell growth, development, and aging2. As such, it regulates important metabolic, hormonal, developmental, and stress responses. Atypical phosphorylation can contribute to a range of disease states, including cancer and diabetes. Phosphoproteomics – the characterisation of phosphorylated proteins – is therefore an important tool for obtaining insights into health and disease. In cellular signal transduction networks, reversible phosphorylation is one of the key events in transducing a signal into the nucleus to control gene expression. Approximately 30% of human proteins were previously estimated to be phosphorylated, but researchers at the Laboratory of Molecular and Cellular BioAnalysis at Kyoto University developed a highly selective enrichment method for phosphopeptides which, when applied to proteome-wide acquisition of cellular phosphorylation status, revealed that at least 70% of human proteins are phosphorylated.3,4

The power of mass spectrometry

Recent technological advances have enabled the use of MS in phosphoproteomic approaches to address the scope of phosphorylation, by facilitating deep characterisation and quantitative analysis of proteins and PTMs, which are critical to understanding signaling pathways and abnormal disease states. Developments in high-resolution mass spectrometers and specific enrichment of phosphorylated peptides tailored for the global analysis of protein phosphorylation represent powerful tools for molecular and cellular biologists studying signal transduction pathways. Despite these advances, identifying PTMs remains significantly more challenging compared with unmodified peptides, as they often occur at low abundances and the differences in protein phosphorylation span several orders of magnitude, driving the need for instruments with higher sensitivity and increased peak capacities.

Ion mobility spectrometry (IMS) is a gas-phase post-ionisation separation method which, when coupled with MS, enables rapid, high-resolution analyte separations based on structure (ion conformation) and mass-to-charge (m/z) ratios5. IMS-MS is a well-established technique that has shown considerable potential for improving peptide identification, providing structural information that is complementary to LC and MS. IMS-MS separates ions based on differences in their shape (IMS) and mass (MS), delivering information on the three-dimensional (3D) structure of an ion. This added ability to separate ions by differences in conformation makes it possible to separate isobaric and isomeric species, such as phosphopeptide positional isomers (i.e., peptides that differ only by the residue that is phosphorylated), which are not easily distinguished by MS techniques alone6.

Further revolutionary increases in sensitivity and speed were made possible when trapped ion mobility spectrometry (TIMS) was introduced for proteomics in 2017, by accumulating and concentrating ions of a given mass and mobility. TIMS enables the interrogation and manipulation of mobility separated ion populations in the gas-phase, with high efficiency, duty cycle and high resolving power in millisecond-second time-scales, and with the possibility to measure collisional cross section (CCS) using first principles that can be further utilized for structural assignments,7 in CCS-aware workflows. The addition of TIMS provides a 4th dimension that is complementary to the previously used mass, intensity and retention time dimensions, resulting in 4D-Proteomics methods. A fractionation approach is often used to obtain deeper proteome coverage, but this method is time-consuming, and if many clinical samples are analysed, the time frame is not realistic.

TIMS is most often coupled with a time-of-flight (TOF) mass analyser to capitalise on its high-speed capabilities. Modern TIMS-QTOF MS systems utilizing parallel accumulation – serial fragmentation (PASEF) can provide the necessary high speed and increased sensitivity. The novel design allows for ions to be accumulated in the front section, while ions in the rear section are sequentially released depending on their ion mobility. The powerful combination of TIMS with PASEF allows for greater phosphoproteome coverage without requiring large sample amounts, and can provide sequencing speeds of > 100 Hz without losing sensitivity or resolution, by synchronizing the quadrupole isolation mass window with the elution time of the specific peptide packages from the TIMS funnel.

For example, the group at Kyoto University found that PASEF can effectively increase MS/MS acquisition rates to reach new depths in phosphoproteomics, improving both identification and confidence in results. The high speed and sensitivity of the PASEF acquisition mode also facilitates high throughput on a TIMS-QTOF MS system. That capability is particularly important for processing the high quantity of samples required to investigate the interaction between humans and bacteria at the proteome level, known as metaproteomics. The next step is to take advantage of the PASEF acquisition mode in current metaproteomics research in order to uncover potential biomarkers of disease.8

Kinase signaling – the reversible enzymatic addition of a phosphate group to a substrate – is a vital part of cellular activity, and detailed knowledge of the kinase signaling process is essential for the understanding of many diseases and to aid in the development of new therapies.9 Kinase-mediated phosphorylation signals are known to cause or drive the progression of diseases such as cancer. The team at Kyoto University has developed phosphoproteomics methods to carry out in vivophosphoproteome profiling of kinase-targeting drugs, with the aim to facilitate drug discovery and development for cancer therapy, as well as enable the exploration of the functional analysis of newly discovered phosphorylated molecules. TIMS-QTOF MS therefore has important implications in drug discovery, particularly for phosphorylations related to cancer. Many drugs that inhibit a specific kinase or subset of kinases have been developed for therapeutic development  and, to date, more than 19,000 kinase inhibitors targeting ~260 protein kinases have been reported,10and ~30 small-molecule kinase inhibitors have been approved for clinical use by the United States Food and Drug Administration (US FDA).11

The group at Kyoto University, by implementing the one-minute gradient with the timsTOF Pro (Bruker Daltonics, Bremen), can investigate the mode of action of kinase inhibitors (Figure 1). This work aims to connect the kinases with their substrates to reveal the entire picture of the signaling network, using experimental and computational approaches

For the past 20 years, identification of phosphorylated proteins based on MS has been used in many studies aimed at large-scale analysis of cellular signaling. Building on our work on the kinome with LC-MS/MS,12,13 researchers are now achieving throughput levels only possible with TIMS-QTOF MS.

It is clear that developments in MS-based proteomics, such as TIMS-enabled 4D-Proteomics, have allowed researchers to gain deeper insights into the molecular and cellular functionality of the human body through the improvements in throughput and sensitivity. In particular, the PASEF acquisition method can provide extremely high speed and sensitivity to reach new depths in shotgun proteomics and phosphoproteomics, using low sample amounts. These 4D-Proteomics approaches will allow scientists to routinely explore parts of the proteome not previously accessible.

Future developments in proteomics are being driven by the increased versatility of computational proteomics, in combination with software and hardware developments. An important advancement in MS-based phosphoproteomics is data-independent acquisition (DIA). DIA is a relatively recently developed MS acquisition technique where, unlike data dependent acquisition (DDA), MS2 scans are acquired in a continuous and unbiased manner for all precursor ions falling within a specific mass range. The combination of next generation sequencing (NGS) with proteomics is becoming more widely used in multi-omics fields such as proteogenomics, which is finding application in clinical research, particularly precision oncology.14

By combining DIA with PASEF, researchers can compensate for the traditional DIA pitfalls by using a pattern of m/zisolation windows within consecutive TIMS events (Figure 2). The percentage of ions used in the dia-PASEF method can be greatly increased (reaching up to 100% for low complexity samples, and still 5X higher than with traditional DIA methods using comparable isolation window sizes and m/z range for high complexity samples). The dia-PASEF cycle time can be reduced to make it compatible with short gradient separation while preserving a high selectivity. It benefits from the TIMS space concentration effect that allows for increased sensitivity and takes DIA selectivity to the next level with full 4D-Proteomics support.

Over the last two decades, significant advances seen in MS technology and new methodologies, such as TIMS, PASEF, and dia-PASEF, have transformed phosphoproteomics into an extremely powerful tool for protein scientists, biologists and clinical researchers looking to turn a deeper understanding of proteins and cell signaling into translational models of disease.