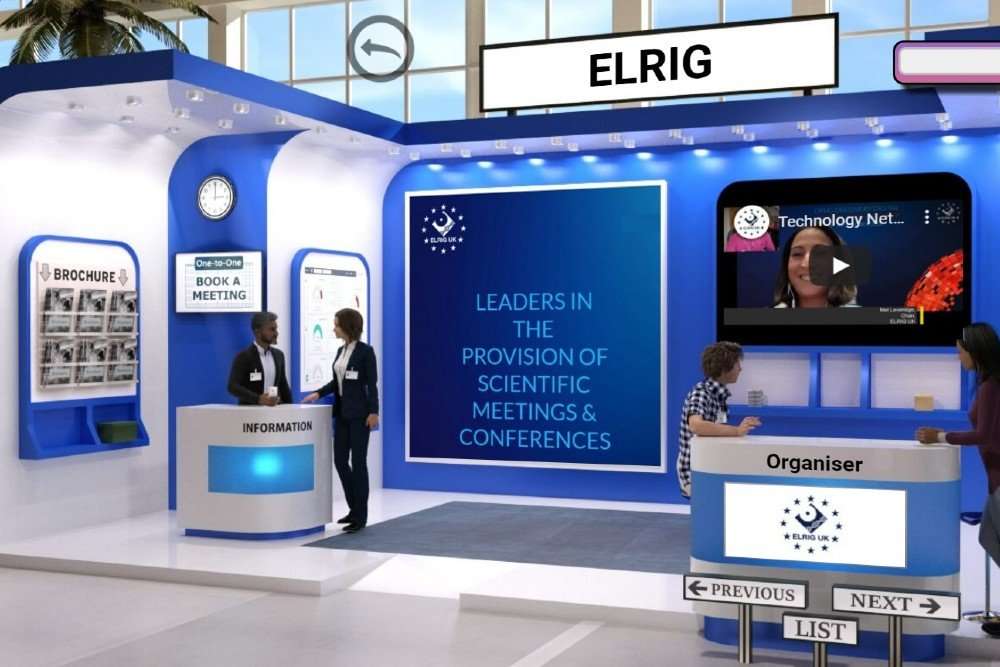 Sanj Kumar outlines the positive role that digital technology has played in ELRIG events and how the organisation has harnessed the use of technology even when events have gone back to face-to-face.

Scientific conferencing plays a key role in bringing together researchers and suppliers to share data, ideas and spark new innovations. Organisers of face-to-face events with large numbers of attendees nationally and abroad, were inevitably affected by the Covid global pandemic, and ELRIG was no exception.

ELRIG typically holds up to 15 events per year, ranging from small informal networking events (with around 40 to 80 attendees) up to large scientific meetings (with over 1000 delegates). However, with a mandatory global lock-down, face-to-face meetings in 2020 had to stop. True to the agile and entrepreneurial spirit of the sector, ELRIG immediately turned all its networking events into webinars, making use of commercially available video meeting platforms. It also took a ‘lift & shift’ strategy with several face-to-face events, re-scheduling venues and re-booking dates with speakers and exhibitors alike.

However, as most of ELRIG’s 12,000 community was involved either directly or indirectly in the pandemic response, ELRIG’s flagship event, Drug Discovery had to go on, as it was still crucial to ensure that the ELRIG community, could meet, learn, collaborate and contribute to the pandemic’s scientific response. Thus, Drug Discovery Digital was created, where a web-based digital platform combined with a virtual Convention centre, successfully enabled ELRIG’s community to listen and learn from talks and digitally walk the floor of our exhibition centre and posters (see above). The response was tremendous with over 1500 delegates, listening to the 90 talks, across eight days, with on-line questions and live voting sessions, the engagement was high, and vendors reported plenty of contacts through their digital booths, all achieved with the delegates attending from their home offices.

Despite the success, the informality and spontaneity of informal meetings was missed and in 2021 the flagship event went back to face-to-face, achieving its usual 1000 plus delegates attending the meeting being held in ACC Liverpool Convention Centre. However, the event incorporated its digital learnings, and also launched its Equality, Diversity and Inclusivity Guiding Principles. Talk tracks had a mix of live-in-person speakers as well as virtual attendance by speakers who could not travel. This enabled ELRIG to attract new speakers and engage audiences right across the globe. The digital platform created an environment where virtual speakers felt like they were in the auditorium, with a view of the room and an opportunity to answer questions and engage with the in-person audience. The delegate experience was also changed using the ELRIG app, meaning delegates could plan their meeting experience and select the sessions (talks, workshops, exhibitions and posters) they wanted to attend. Furthermore, all the talks were recorded and are now available to view-on-demand.

ELRIG has already planned its 2022 events (see list on the right) and knows that each event will have its usual face to face element, which start and end on the planned dates, but this new digital component will continue and no doubt evolve, extending the life of the conference beyond the live event and increasing the reach of ELRIG’s open-access science across the globe.

The Fall 2021 issue of Drug Discovery World magazine was accompanied by an exclusive DDW & ELRIG UK supplement ahead of ELRIG UK’s Drug Discovery 2021 in Liverpool, October 19-20, 2021. The supplement, available as a flipbook here, covers the themes of the event: Re-imagine, Re-invent and Re-connect.

The European Laboratory Research & Innovation Group (ELRIG) is a leading European not-for-profit organisation that exists to provide outstanding scientific content to the life science community. The foundation of the organisation is based on the use and application of automation, robotics and instrumentation in life science laboratories, but over time,  it has evolved to respond to the needs of biopharma by developing scientific programmes that focus on research areas that have the potential to revolutionise drug discovery.

Comprising a global community of over 12,000 life science professionals, participating in its events – either at one of its scientific conferences or one of its networking meetings – aims to enable its community to exchange information, within disciplines and across academic and biopharmaceutical organisations, on an open access basis, as all its events are free-of-charge to attend.