The start-up that knows one size doesn’t fit all 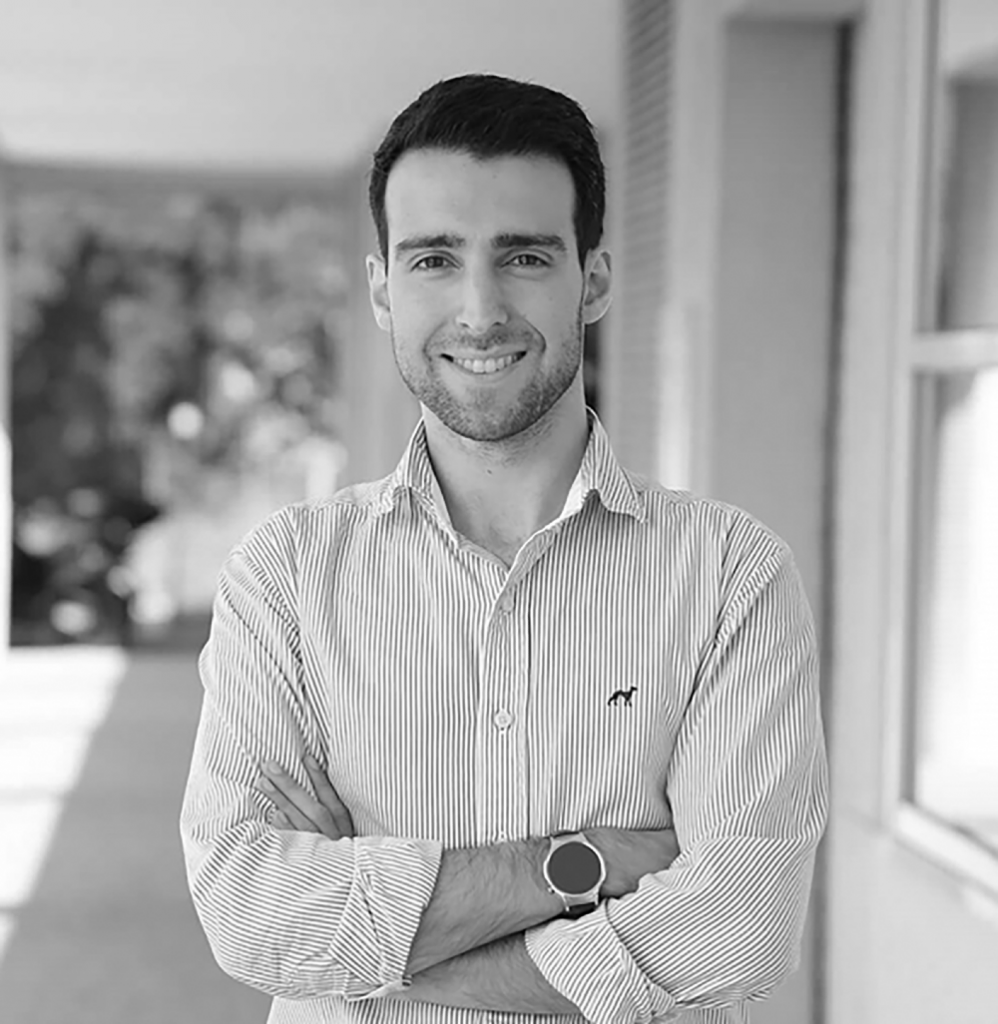 Luis Valente, CEO & Co-Founder of iLoF, has been recognized by Forbes as one of the top 30 under 30 for science and healthcare. He told Lu Rahman what’s behind his start-up that recently secured $1 million in investment from Microsoft’s Venture Fund, M12 and Mayfield Fund and won the EIT Health Wild Card competition in 2019.

Start-up iLoF (Intelligent Lab on Fiber), uses artificial intelligence (AI) and biophotonics to detect neurogenerative biomarkers and optimise the clinical trial selection process for diseases such as Alzheimer’s. It’s a UK-based company, working to enable a new era of personalised medicine, to build a cloud-based library of diseases biomarkers and biological profiles.

iLoF provides screening and stratification tools in what it says are an affordable, fast, portable way, saving up to 40% of cost and 70% of the time spent screening for clinical trials. It is currently focusing on a validated platform technology for Alzheimer’s, while having ongoing verticals on digestive cancer, stroke and infectious diseases.

The company was created by recognising that advances in medicine have been based on the idea that the same treatment is effective for the entire population when, unfortunately, it is not always so. Many of the challenges in today’s healthcare industry are dealing with complex, heterogeneous diseases. These diseases are correlated with different factors and present different behaviours in different individuals – and this was one of the motives behind iLoF’s inception.

The investment from M12 and Mayfield will have clear impact on the business, allowing it to accelerate its current operations with its clinical partners (mainly in the area of neurodegeneratives, such as Alzheimer’s), and expanding the platform in two more areas, one of which is oncology.

In 2019, co-founders Joana Paiva and Paula Sampaio (currently CTO and CSO), were developing an agnostic technology based on photonics and artificial intelligence, which had already shown excellent results stratifying patients in the oncology field (gastric cancer). As Paiva was at the end of a PhD program, they thought it was the right time to try to bring the platform to market.

A fundraising process began and at the end of three months they had a term sheet worth a few hundred thousand pounds of investment, from a British investment fund, with the purpose of setting up the company and conducting a proof of concept

“We ended up not accepting that proposal and joined an acceleration program: the Wild Card. Over more than half a year, in addition to being lucky enough to find and bring in our fourth co-founder (Mehak Mumtaz, current COO) to the team, we were able to validate the need for our platform through more than 100 documented interviews with stakeholders in the health, pharmaceutical and technological industries on four continents,” reveals Valente.

“Even before the end of the program, we obtained letters of interest from three global pharmaceutical groups showing interest in our platform and ended up securing an investment of a social impact investor worth €2 million (EIT Health). iLoF was born.”

The platform aims to improve the process of clinical trial screening and speed up drug discovery in diseases with little or no treatment options.

“iLoF is a platform that, based on a simple drop of blood, collects and stores both biomarkers of different diseases, as well as personalised biological profiles of different types of patients,” says Valente.

He says that with this cloud-based database (which can be compared to a fingerprint file), it is possible to offer inexpensive, portable, non-invasive screening and stratification tools that can be used to recruit patients for clinical studies in an inexpensive and efficient way for the industry while being convenient for the patient.

“Although the platform is agnostic regarding therapeutic targets and has proven itself in areas such as oncology or cardiovascular diseases, we are very focused on helping personalised treatments for rare or complex diseases to reach the market, with a special focus on one of the greatest healthcare challenges of modern times, Alzheimer’s,” Valente adds.

He says the platform creates value. “Current methods for patient screening on stratification used on clinical trials are mostly expensive, inconvenient and unscalable. Some use invasive procedures (like lumbar puncture), or high-infrastructure methods (like PET Scan). All this causes a majority of patients to drop-out of clinical trials during the recruitment phase (up to 90%, in the case of Alzheimer’s). This is what we aim to change. We provide a blood-based, pre-screening tool, that ensures that patients that enrol in the clinical trial have the right biological profile for the study, saving time, cost and also making the process more convenient for the patient.”

According to Valente, in recent years, many large-scale clinical studies have been suspended or even cancelled, due to lack of promising results or even budget issues.

“In Alzheimer’s alone, in the past 14 years, more than 400 clinical studies have failed, with no approved new treatment,” he says.

“On the one hand, it was found that the same drug cannot be tested in the entire population, and that stratification tools are needed to divide the population according to their biological profile and response to therapy. On the other hand, the inclusion and recruitment methods for studies are still very invasive, expensive and inaccessible, using tools such as lumbar puncture or positron emission tomography (PET). All of this causes 90% of patients to drop out of the clinical study, which greatly increases the cost of the study and makes it difficult to approve a treatment. Alzheimer’s is a clear case of the difficulties of clinical studies today. Unfortunately, however, it is far from unique.”

iLoF  ensures that the patients enrolled into the trial fit the inclusion criteria with the highest probability,

“By using the previous stratification step, and by making the process scalable and blood-based, we transform the patient experience making it more human,” says Valente.

The use of biophotonics also impacts the process. This light enabling technology, uses physics to detect nano-scale particles in fluids (like blood) in an inexpensive, label free-way, says Valente.

“It’s the combination between photonics and AI that gives the iLoF platform its agnostic capabilities,” he adds. “Technically, we shine a laser guided by an optical fibre, with a very focused microfabricated lens on top. We capture the scattering pattern of the light (after hitting the sample), and we use that to create very accurate fingerprints of both the individual biomarkers and biological profiles present in those samples. Aside from clear cost and time advantages, it allows to collect essential patient biological data using a convenient, scalable method like blood.”

The company has focussed on certain types of diseases as unfortunately, says Valente, most of the diseases for which there is no treatment are heterogeneous, complex diseases, for which the same treatment does not work for the entire population. Tools are needed to stratify the population based on their different biological profiles (such as iLoF), and allow the development of appropriate treatments for each profile

“This is especially important in neuro-degenerative diseases – as it is in the oncology space. In that field, we have already helped run stratification pilots of different types of gastric cancer, stomach and pancreatic cancer, and in essence, this differentiation between biological profiles and tumour subtypes will allow the doctor to define which treatment is the most appropriate for each case, minimising side effects while maximising effectiveness.”

It’s clear from Valente’s explanations why the business has attracted attention and investment. I wondered if there was any advice he would like to pass on to other pharma start-ups?

“No matter how large an organisation, there is always at least one person (usually multiple) responsible for making the decision to use or purchase a product. And normally, that person is completely different from the person who will be using the product. Understanding the distinction between user and buyer is essential to survive in healthcare B2B, especially working with pharma. Another lesson is that most of the untested assumptions made about a market need are false: mainly in the health sector. It is essential to validate with the user.”

Luis Valente has a background in computer science, and has spent several years focusing on innovation and improving strategies in companies from tech to healthcare. Having founded his first company at 18, Valente has been awarded in world-class management competitions, like the Global Management Challenge or the Global Marketing Competitors. As CEO and Co-Founder of iLoF, he is working to enable a new era of personalised medicine, by using AI and photonics to build a cloud-based library of diseases biomarkers and biological profiles