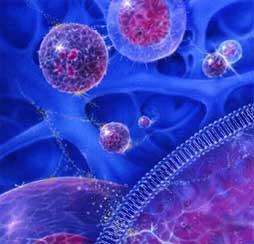 Continuing research efforts that further refine our understanding of the pathobiological mechanisms in RA has, in turn, led to the development of novel DMARDs acting on these mechanisms. These novel agents exert their effects on diverse tissue compartments involved in RA, furthering the likely scenario of developing effective, alternative combination strategies. The following article addresses opportunities in the treatment of RA that are being realised as a result of both basic and clinical research efforts into novel DMARD development.

Rheumatoid arthritis (RA) is a chronic inflammatory disease affecting approximately 0.8% of the adult population worldwide. Onset typically occurs between 30 and 50 years of age with an estimated incidence in the United States of 25 per 100,000 persons for men and 54 per 100,000 persons for women. Given the high level of functional impairment that can be associated with RA, the disease has a considerable economic impact.

RA is responsible for roughly 250,000 hospitalisations and 9 million physician visits annually. In 2003, nationwide raw earnings losses ascribed to RA totalled $108 billion. Moreover, if untreated, 20 to 30% of persons with RA become permanently work-disabled within two to three years of diagnosis (1).

The pathogenesis of RA is complex and is mediated by several mechanisms. Early stages of disease progression are characterised by a leukocytic mobilisation and infiltration into the tissue liningthe non-cartilagenous surfaces of the joint (synovial membrane) and the joint fluid. Associated with the leukocytic infiltration is the proliferation of fibroblasts comprising the synovial membrane and expansion of the synovium into a tumour-like mass known as the pannus.

Expansion of the pannus requires angiogenesis, which also further promotes the chronic recruitment and infiltration of leukocytes into the joint. It is the inflamed and expanding synovium that is responsible for the characteristic erosions of cartilage and subchondral bone due to proteases, hydrolases and cytokines released by the leukocytes and synoviocytes in the pannus and joint space.

The treatment paradigm for newly diagnosed RA has shifted from a management of symptoms approach to an aggressive interventional approach. Previous strategies combining low dose corticosteroids and nonsteroidal anti-inflammatory drugs until joint damage is documented, are no longer followed.

The American College of Rheumatology Subcommittee on Rheumatoid Arthritis (ACRSRA) now recommends that patients with suspected RA be referred within three months of presentation for confirmation of diagnosis and initiation of treatment with a disease-modifying antirheumatic drug (DMARD).

The standard-of-care DMARD is methotrexate. Other DMARDS can be added or used in place of methotrexate as clinically warranted. This is exemplified by the incorporation of biological agents which targets the proinflammatory cytokine, tumour necrosis factor alpha (TNF ), into methotrexate treatment regimes. The benefits of this aggressive approach continue to be documented through clinical trials, and the ACRSRA recommendation continues to be made despite risks of toxicity and adverse effects (2).

Several reasons indicate a need for continued development of novel DMARDs remains. Firstly, use of the current armamentarium of existing small molecule and biological DMARDS that have been approved for RA can be complicated and limited by the development of adverse events that can lead to treatment interruptions or discontinuations. Secondly, there is considerable heterogeneity in the response of RA patients to a given DMARD.

Finally, RA patients that initially respond to a given DMARD can become refractory to that DMARD and progress, necessitating alternate treatment options. For these reasons, it is critical that basic and clinical research efforts continue to further refine our understanding of the pathobiological mechanisms in RA so that novel DMARDs acting on these mechanisms can be developed.

The pathobiology of RA can be conceived as a disease comprised of six distinct yet interrelated processes (Figure 1). 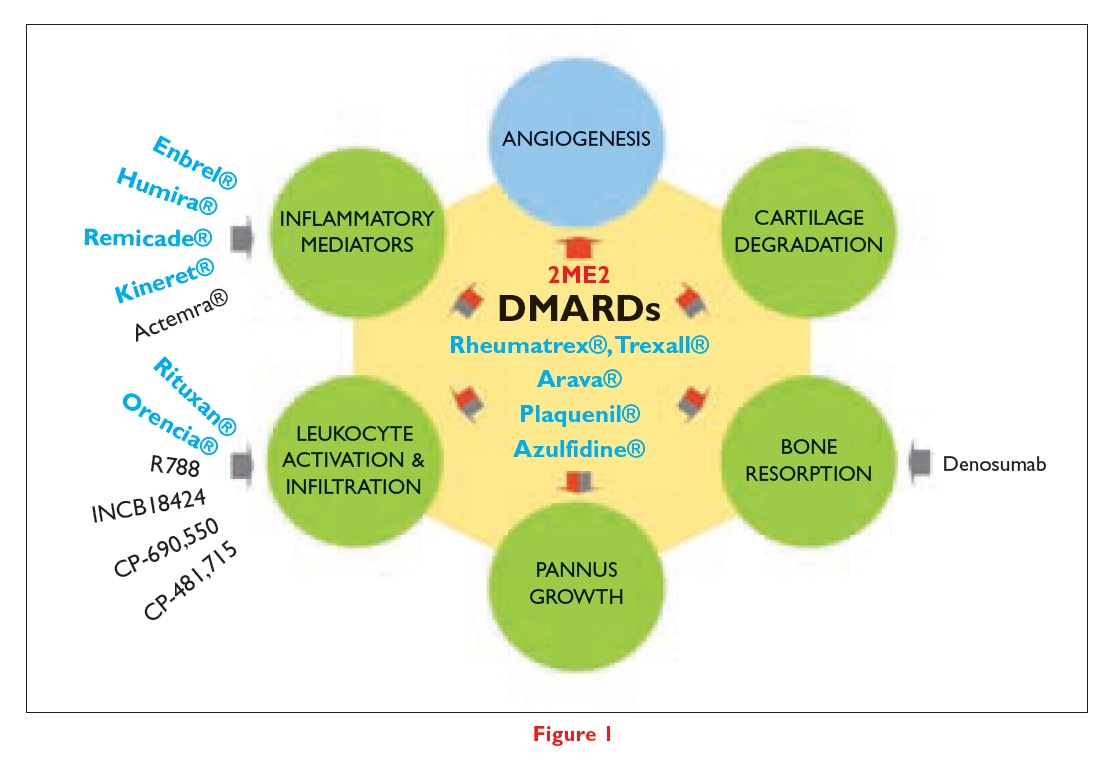 These processes can be categorised as connected compartments or modules comprised of (a) inflammatory mediators, (b) activated/infiltrating leukocytes, (c) angiogenesis, (d) pannus growth, (e) cartilage degradation and (f) bone resorption.

It is within this simplified framework where the impact of existing small molecule and biologic DMARDs can be discussed and where opportunities for novel therapeutic development can be conceptualised. In this regard, it is profound that effective small molecule DMARDs have been clinically developed based on initial observations outside of rheumatology and in the absence of a clear understanding of why they work.

This is true of methotrexate (Rheumatrex® and Trexall®),leflunomide (Arava®), sulfasalazine (Azulfidine®), and hydroxychloroquine (Plaquenil®). These compounds act directly or indirectly on five of the six processes (angiogenesis excluded) involved in the pathogenesis of RA, presumably through antiproliferative and/or immunosuppressive mechanisms.

Hence, the empiric concept of a ‘cross-over opportunity’ for a compound indicated for a disease distinct from RA to a DMARD still remains a potentially viable approach in RA drug development.

Considerable clinical success has been realised with biological DMARDs that target inflammatory mediators (3). The application of TNF neutralisation to treat RA has been a hallmark of biologic therapies. Currently, three agents designed to inhibit TNF are approved in RA. These include the monoclonal antibodies, infliximab (Remicade®) and adalimumab (Humira®), and the fusion protein, etanercept (Enbrel®).

These products have resulted in significant clinical benefit in patients with early and long-standing RA when used alone or in combination with small molecule DMARDs. However, the effectiveness of biologics acting to block TNF is not without side effects. The principal adverse experience arising from the use of TNF neutralising agents has involved an increased risk of bacterial infection or reactivation and fungal infections.

Although this increased risk of infection may be out-weighed by clinical benefit, as these agents continue to gain greater clinical use, the number of adverse events rises. In September 2008, when the FDA ordered stronger warnings about the risk of potentially deadly fungal infections, especially histoplasmosis, in individuals taking TNF blocking agents. Another inflammatory cytokine that has been targeted as a treatment for RA is represented by interleukin-1 (IL-1).

Anakinra (Kineret®) is an IL-1 receptor antagonist that is approved for the treatment of RA. Anakira can be used alone or in combination with DMARDs other than the TNF blocking agents (infliximab, adalimumab and etanercept) since this combination has been shown to increase incidence of infections without additive clinical benefit.

The clinical validation of cytokine neutralisation as a treatment for RA continues to yield new therapeutic strategies. In April 2008, an interleukin-6 (IL-6) neutralising monoclonal antibody, tocilizumab (Actemra®), was approved in Japan for the treatment of RA. In July 2008, the Arthritis Advisory Committee of the US Food and Drug Administration recommended approval of tocilizumab for reducing signs and symptoms in adults with moderate to severe RA, including RA patients who have failed anti-TNF therapy.

If approved, tocilizumab will represent the third recognised approach to proinflammatory cytokine neutralisation that impacts the progression of RA. Given the complexity of cytokine networks, the clinical validation of this approach in RA suggests additional strategies of DMARD development, including targeting interleukin-15 or interleukin-17.

Clinical success in RA has also been achieved with biological DMARDs that target specific leukocyte subsets and interfere with their function. Rituximab (Rituxan®) is a monoclonal antibody that binds to the CD20 antigen expressed on the surface of B cells. Binding of rituximab to CD20 causes a rapid and sustained depletion of circulating B cells.

Clinical studies have demonstrated that rituximab is effective in decreasing signs and symptoms and in slowing radiographic progression in RA patients who have failed other DMARD therapies. The agent is approved in the United States but only in patients who have failed TNF neutralising agents. Abatacept (Orencia®)
is a fusion protein that binds to the CD28 antigen expressed on T cells.

Binding of abatacept to CD28 prevents the activation of the T cell response. Abatacept has been approved by the FDA for use in adult patients with moderate to severe rheumatoid arthritis who have not responded adequately either to oral DMARDS (such as methotrexate) or to the TNF antagonists.

These kinases are involved in receptor-mediated signal transduction in macrophages (syk kinase) or in cytokine-mediated signalling in multiple immune and nonimmune cells (JAK2 and JAK3). Results from early Phase I and 2 studies with each of these compounds have demonstrated profound and rapid DMARD activity in RA patients and subsequent studies are anticipated that will define the adverse event profile and better determine which RA patients will be candidates for these types of therapy.

Additional strategies have been devised that target leukocyte infiltration by interfering with chemokine receptors. One agent that is in early clinical development, the CCR1 antagonist, has been shown to inhibit monocyte chemotactic activity and decrease the number of macrophages in synovial tissue of treated patients. Whether this decrease in infiltrating macrophages is associated with improvements in RA symptoms will be studied in expanded clinical trials.

Development of agents specifically targeting bone resorption in RA has principally focused on the osteoprotegerin (OPG)/receptor activator of nuclear factor B ligand (RANKL) which is necessary for osteoclast development. Denosumab, a monoclonal antibody that binds and antagonises RANKL, decreases the progression of osseous erosions (versus a placebo group) when used in RA patients on stable doses of methotrexate. However,whether this activity of denosumab is similar to TNF inhibitors (as TNF stimulates RANKL) is unclear. Nonetheless, the recognition of bone resorption in RA as a distinct therapeutic target should continue to be investigated.

The angiogenic process in RA sustains the aberrant growth of the synovial membrane, ultimately leading to pannus development. In addition, the neovasculature promotes the chronic recruitment and infiltration of inflammatory leukocytes into the joint. Angiogenesis is therefore an attractive target in treating the pathogenesis of rheumatoid arthritis.

Medications that specifically target angiogenesis have produced promising clinical results in fields that include ophthalmology and oncology, and these compounds represent cross-over opportunities into rheumatoid arthritis. One such orallyactive compound, 2-methoxyestradiol or 2ME2, which has antiangiogenic and antiproliferative activities, is being developed to treat patients with rheumatoid arthritis based on favourable preclinical research results and safety data obtained from its use in oncology patients.

Of particular interest is the observation that 2ME2 exerts its antiarthritic activity by impacting multiple pathophysiological processes that include, in addition to inhibition of articular angiogenesis, attenuation of inflammatory cytokines and cellular infiltration into the synovial compartment; lessening of soft tissue and bone lesions; and arrest of pannus development.

These observations further illustrate that rheumatoid arthritis is a disease of many distinct but interrelated processes. Therapeutically impacting one process, in this case angiogenesis by 2ME2, can lead to significant inhibition of additional athophysiological activities.

In summary, there is a continued need to develop additional treatments options in RA. As our knowledge of the pathobiological mechanisms in RA continues to be expanded, pportunities become apparent for DMARD development. With the clinical validation of targeting inflammatory mediators or leukocyte activation and infiltration being realised, the majority of DMARD development efforts remain focused on these two areas. However, additional opportunities clearly exist for development of DMARDs which target other components of RA pathology. One of these opportunities might well be represented by focusing on the angiogenic process. DDW

This article originally featured in the DDW Fall 2008 Issue

Dr William E. Fogler is the Senior Director of Translational Research at EntreMed, Inc. Currently, Dr Fogler is investigating the antiinflammatory properties of 2-methoxyestradiol (2ME2, Panzem®) in preclinical models. Data resulting from this research demonstrate that 2ME2 inhibits inflammation and disease progression in preclinical models of rheumatoid arthritis.

Additionally, these data further support the potential for 2ME2 as a disease modifying anti-rheumatic drug (DMARD).

2 Saag, KG et al. American College of Rheumatology 2008 recommendations for the use of nonbiologic and biologicdisease-modifying antirheumatic drugs in rheumatoid arthritis. Arthritis Rheum 59:762-784, 2008.