Transcending Proteasome Inhibition for the Treatment of Cancer 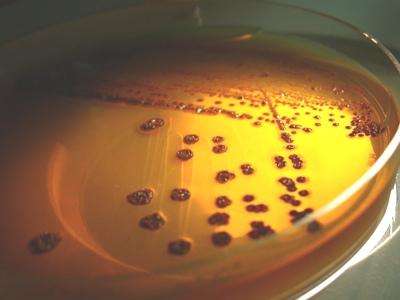 Transcending Proteasome Inhibition for the Treatment of Cancer

Specific pharmacological inhibition of the UPS with a potent small molecule inhibitor of the proteasome has shown therapeutic utility in different cancers. Here we look beyond proteasome inhibition to upstream mechanisms within the UPS and describe one pathway that has shown promise as a new generation of anti-cancer medicines.

Claude Bernard, the 19th century physiologist, is credited with first advocating the concept of homeostasis in biological systems (1). Homeostasis refers to the tendency of an organism or cell to maintain health and function by regulating its internal conditions in response to ever-changing internal and external conditions. Many diseases are manifestations of homeostatic imbalances. For example, it is well known that blood sugar (glucose) levels are controlled by the hormone insulin.

Cancer is another example of the failure of homeostasis. The number of cells in a healthy adult organism must be kept relatively constant. This is accomplished by balancing the processes of cell proliferation and programmed cell death (apoptosis). Cancer occurs when the balance between these two processes is altered and cells proliferate faster than they die.

In order to maintain homeostasis at the level of the organism, there must be homeostasis within cells, specifically protein homeostasis, which is accomplished via the balanced synthesis and degradation of proteins. Regulated protein degradation, or proteolysis, is critical to cell signalling, control of the cell cycle, transcription activation and apoptosis (2).

In eukaryotic cells, protein homeostasis is controlled primarily through the ubiquitin-proteasome system (UPS). The UPS plays an essential role in the degradation of proteins that are misfolded, oxidised or otherwise damaged. Additionally, many short-lived regulatory proteins are degraded by the UPS. Proteins are targeted for degradation by the UPS through a highly regulated, multi-step process, which attaches a chain of ubiquitin molecules to a protein substrate, marking it for destruction by the proteasome.

There is a growing body of evidence showing that the UPS is altered in cancer and some neurodegenerative diseases (3,4). This evidence and the well-appreciated role of the UPS in regulating known cancer-associated proteins, make it an excellent target for the development of novel small molecule therapeutics.

The ubiquitin-proteasome system Proteins are targeted for degradation by the proteasome through the attachment of a polyubiquitin chain. Ubiquitin is a 76-amino-acid, evolutionarily conserved polypeptide, which is attached to target proteins and serves as the point of attachment for extension of the polyubiquitin chain (4). The process of attaching ubiquitin to a target protein starts with the E1 ubiquitin activating enzyme (UAE). This is the major E1 enzyme that activates ubiquitin for all cellular polyubiquitylation events. Ubiquitin is activated in an ATP-dependent manner by UAE and generates an E1-ubiquitin thioester (Figure 1). 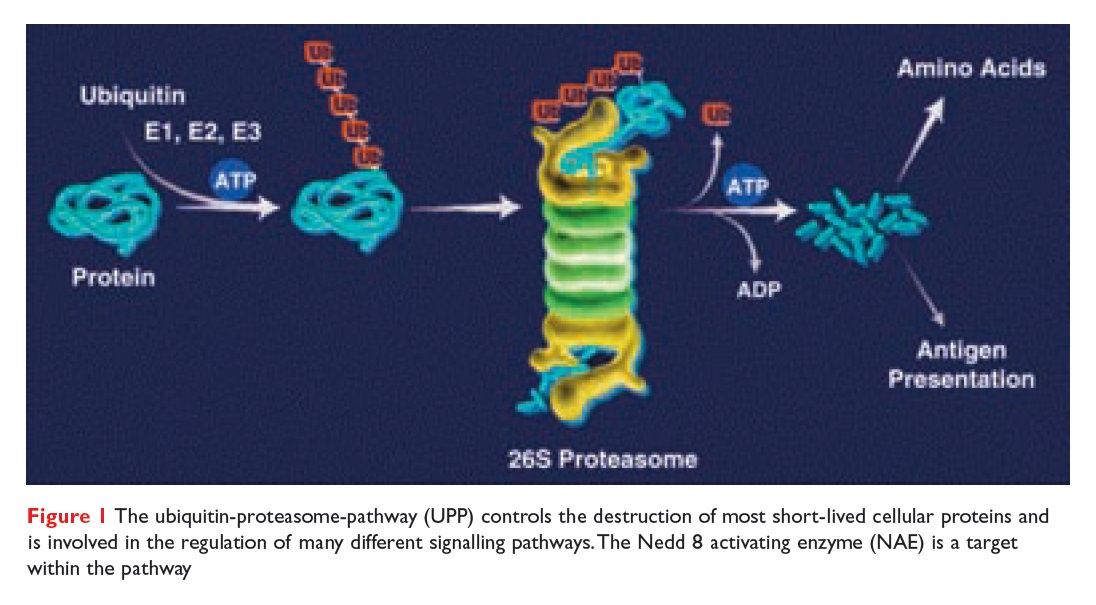 Ubiquitin ‘charged’ UAE then transfers the ubiquitin molecule to one of 40 ubiquitin conjugating enzymes (UBCs) or E2s. The charged E2s then interact with substrate specific ubiquitin E3 ligases. The ubiquitin molecule is transferred to the substrate protein either directly from the E2, or in some cases, from a ubiquitin charged E3 (the HECT family of E3 ligases). A polyubiquitin chain is then generated on the substrate; polyubiquitinated proteins are recognised by the 26S proteasome, deubiquitinated, unfolded and degraded by the peptidase activities in the 20S core particle of the proteasome

Proteasome inhibition Each of the steps just described is a potential target for drug development. The first clinically successful target in the UPS is the proteasome, representing the last step in the chain of events leading to protein degradation. Proteasome inhibition disrupts protein homeostasis preventing the destruction of hundreds to thousands of polyubiquitinated proteins. These proteins accumulate within the cell and ultimately lead to death via apoptosis.

Bortezomib (VELCADE®; Millennium Pharmaceuticals, Inc) is a first-in-class, reversible peptide boronic acid inhibitor of the 20S proteasome. Proteasome inhibition leads to a myriad of downstream consequences, many of which have been implicated in mediating cancer cell death. Among the pathways implicated in mediating proteasome inhibitor induced cell death are those involved in ER stress, reactive oxygen species generation and NF-kB signalling.

Bortezomib is currently the only proteasome inhibitor approved for the treatment of cancer. It is approved for the treatment of patients with multiple myeloma and mantle cell lymphoma, two blood cancers, after patients have received at least one prior therapy. Accelerated approval of bortezomib in multiple myeloma was granted in 2003, followed by full approval in 2005. Approval in mantle cell lymphoma was granted in 2006.

Bortezomib also has shown efficacy in combination with a wide range of other anti-cancer agents in blood and other cancers. Two other proteasome inhibitors are currently in early-stage clinical trials. Trials of carfilzomib (Proteolix) are under way in blood cancers, while trials of NPI- 0052 (Nereus Pharmaceuticals, Inc) are under way in a wide range of cancers. These molecules, unlike bortezomib, are irreversible inhibitors of the peptidase activities of the proteasome.

Other targets in the UPS

Proteasome inhibition targets all proteins degraded by the 26S proteasome. There could be significant benefit to targeting other enzymatic activities within the UPS, which could lead to more selective stabilisation of a subset of key proteins. An increase in target specificity could increase the effectiveness of a therapeutic intervention, while simultaneously diminishing or eliminating some unwanted toxic side-effects.

Targeting the proteasome, while proven efficacious, does not allow for this level of specificity. The demonstrated efficacy of proteasome inhibition on cancer cells was at first surprising, because the proteasome is responsible for the degradation of most intracellular proteins and the initial expectation was that it would be equally toxic to normal cells.

Pharmacologic targeting of E3 ligases could, in theory, provide a wider ‘therapeutic index’ than targeting the proteasome because specific E3s ubiquitinate a small number of proteins, whereas the proteasome degrades all ubiquitinated proteins. For example, MDM2 is the E3 ubiquitin ligase involved in the degradation of p53, a tumour suppressor protein which is known to prevent carcinogenesis by promoting cell cycle arrest and apoptosis (5).

If wild-type p53 could be stabilised, the increased levels of apoptosis could provide some therapeutic benefit in treating human cancers. The targeted small molecules Nutlin1 and RITA have both been shown to slow tumour growth in murine xenografts, presumably by stabilising and activating p53 by disrupting the E3 ligase activity of MDM24 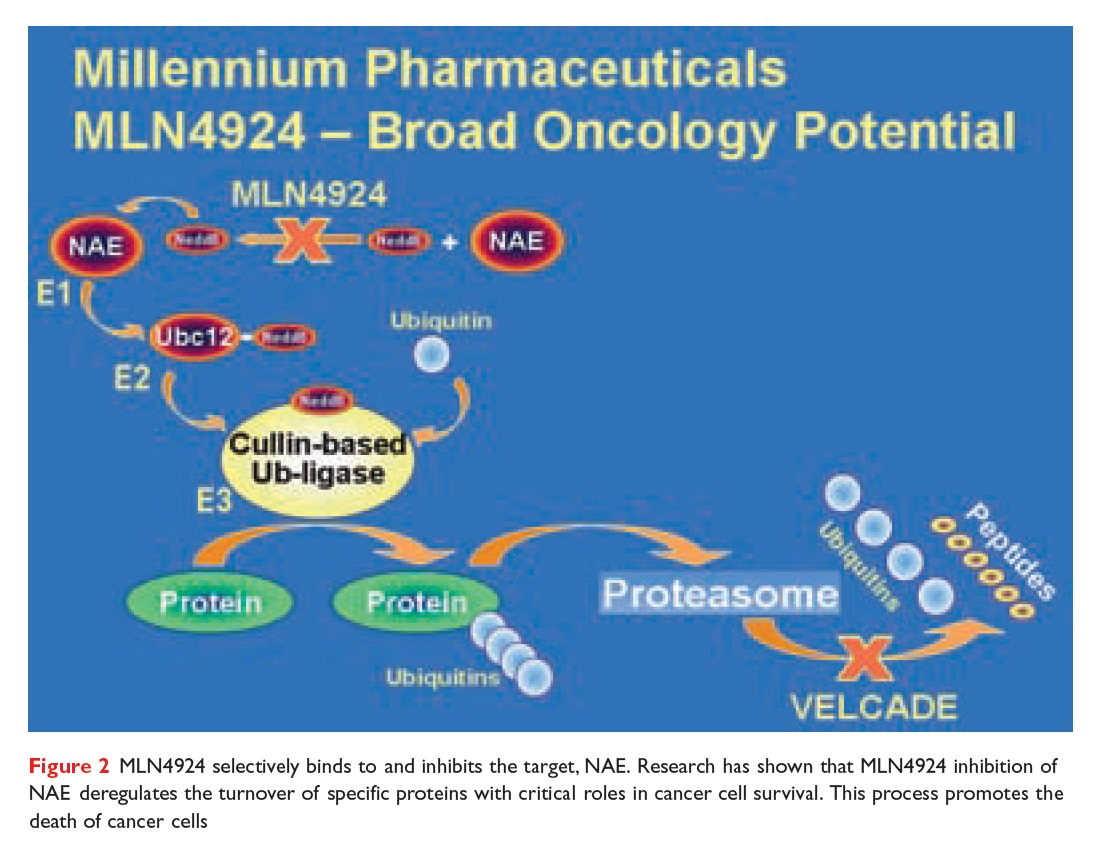 MLN4924 has been shown to inhibit cell growth across a wide range of tumour cell lines, including those derived from breast and lung tumours, as well as diffuse large bcell lymphomas (DLBCL). Approximately half of all DLBCLs are dependent on NF-kB signalling for cell survival, which requires constitutive IkB kinase (IKK) signalling. IKK phosphorylates IkBa, which sequesters NF-kB in the cytoplasm. This phosphorylation targets the IkBa/NF-kB complex for proteasome degradation via the nedd8 pathway. By inhibiting NAE, turnover of IkBa is prevented and NF-kB signalling is inhibited, which leads to apoptosis and an inhibition of tumour growth.

Evidence for the potential tumour specificity of MLN4924 comes from experiments in which tumours were grown in immunocompromised mice by injecting them subcutaneously with DLBCL cell lines. MLN4924 treatment of DLBCL tumour bearing mice lead to a dose and time dependent inhibition of NAE in tumour tissue, and upon repeat dosing, a dose dependent inhibition of tumour growth. At the highest doses tested, which were well tolerated with minimal body weight loss, tumour regressions were noted.

These positive pre-clinical findings have lead to Phase I trials of MLN4924 in both blood and solid tumours.

The malfunction of the UPS also has been shown to contribute to the pathogenesis of Parkinson’s disease and other diseases of the central nervous system. Parkin is an E3 ligase and the mutation of the parkin gene is seen in approximately half of the patients with a specific type of juvenile Parkinson’s disease6. Theoretically, Parkins could be a target for therapy in this disease, although the pharmaceutical industry has been less successful at developing ‘activators’ of mutated proteins compared to its success at developing inhibitors of activated proteins.

Our knowledge of the ubiquitin-proteasome system, which regulates a large number of cellular processes involved in protein homeostasis, is increasing rapidly. As such, we are continuing our quest for specific, druggable targets within this system. Millennium will introduce the first activating enzyme (E1) inhibitor (MLN4924) into human clinical trials this year. Other opportunities for drug discovery certainly exist within this complex pathway. Targeting of E3 ligases would provide the highest level of specificity and the preclinical successes of the MDM2 inhibitors are encouraging, although no E3 inhibitor has entered human clinical trials yet.

Proteasome inhibitors are less selective than E1 or E3 inhibitors. Even so, their clinical success in multiple myeloma and non-Hodgkin’s lymphoma, both as single agents and in combination with other chemotherapeutics, is unequivocal. Competitors to bortezomib, the only FDAapproved proteasome inhibitor, are currently in Phase I and II clinical trials.

These important findings highlight the need for further research into the role of the ubiquitin-proteasome system and protein homeostasis in cancer and other diseases. A more detailed understanding of this system as well as the impact of targeting specific steps within this pathway, has the potential to result in more disease-specific therapies with fewer off-target effects. The success of this endeavour may provide significant benefits for a growing number of patients worldwide.

I would like to acknowledge Dr Elisabeth M. Fine, Medical Writing Manager at Millennium Pharmaceuticals, for her help in preparing this article. DDW

This article originally featured in the DDW Summer 2008 Issue

Dr Mark Rolfe joined Millennium in 1999 and has held several strategic rolls within the company, most recently as Vice-President, Oncology Biology. Dr Rolfe has presented research at numerous international conferences and been a reviewer for several journals, including Nature Medicine, EMBO Journal and the International Journal of Cancer. He received his PhD at the National Institute for Medical Research in Mill Hill, London in the Genetics Laboratory.