The Importance of Liquid Handling Quality Assurance in Drug Discovery 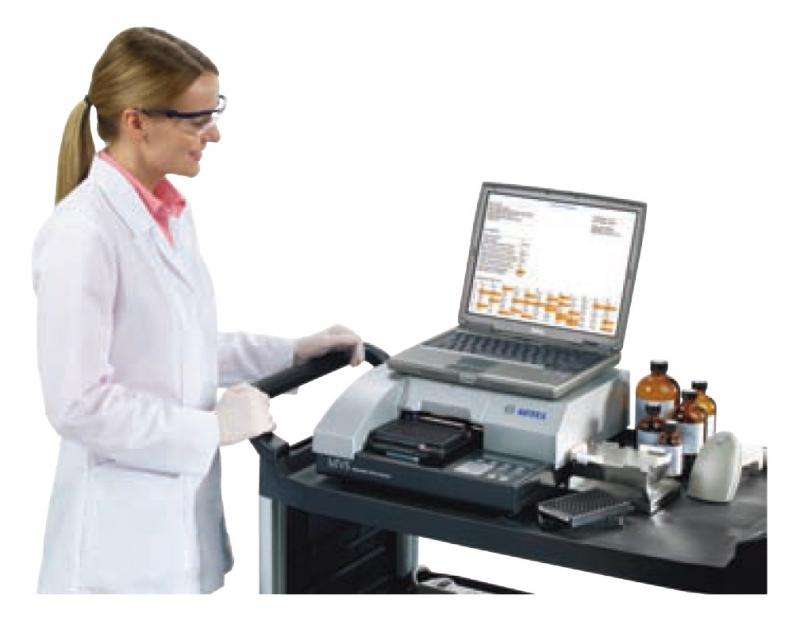 The Importance of Liquid Handling Quality Assurance in Drug Discovery

The tug-of-war between quality and productivity is an issue facing all drug discovery companies, competing in a fierce race to bring breakthrough drugs to market before the competition.

With the advance of laboratory automation and the introduction of automated liquid handlers (ALH), high-throughput screening processes have provided the ability to rapidly evaluate a large number of compounds as potential drug foundations.

However, an increase in throughput does not directly correlate to decreases in cost or increases in productivity. The drug discovery process currently comes with an average price tag of $800 million – $1 billion per new molecular entity – and lasts from 10-15 years. The continual mushrooming of drug prices and increased public scrutiny of pharmaceutical companies highlight the need for new solutions to streamline drug discovery operations.

Previously, the lack of adequate technologies for verification of automated liquid handler performance prevented cost-effective quality control processes. Now, new technologies are available for rapid and reproducible assessment of the accuracy and precision of volumes dispensed from automatic instrumentation. 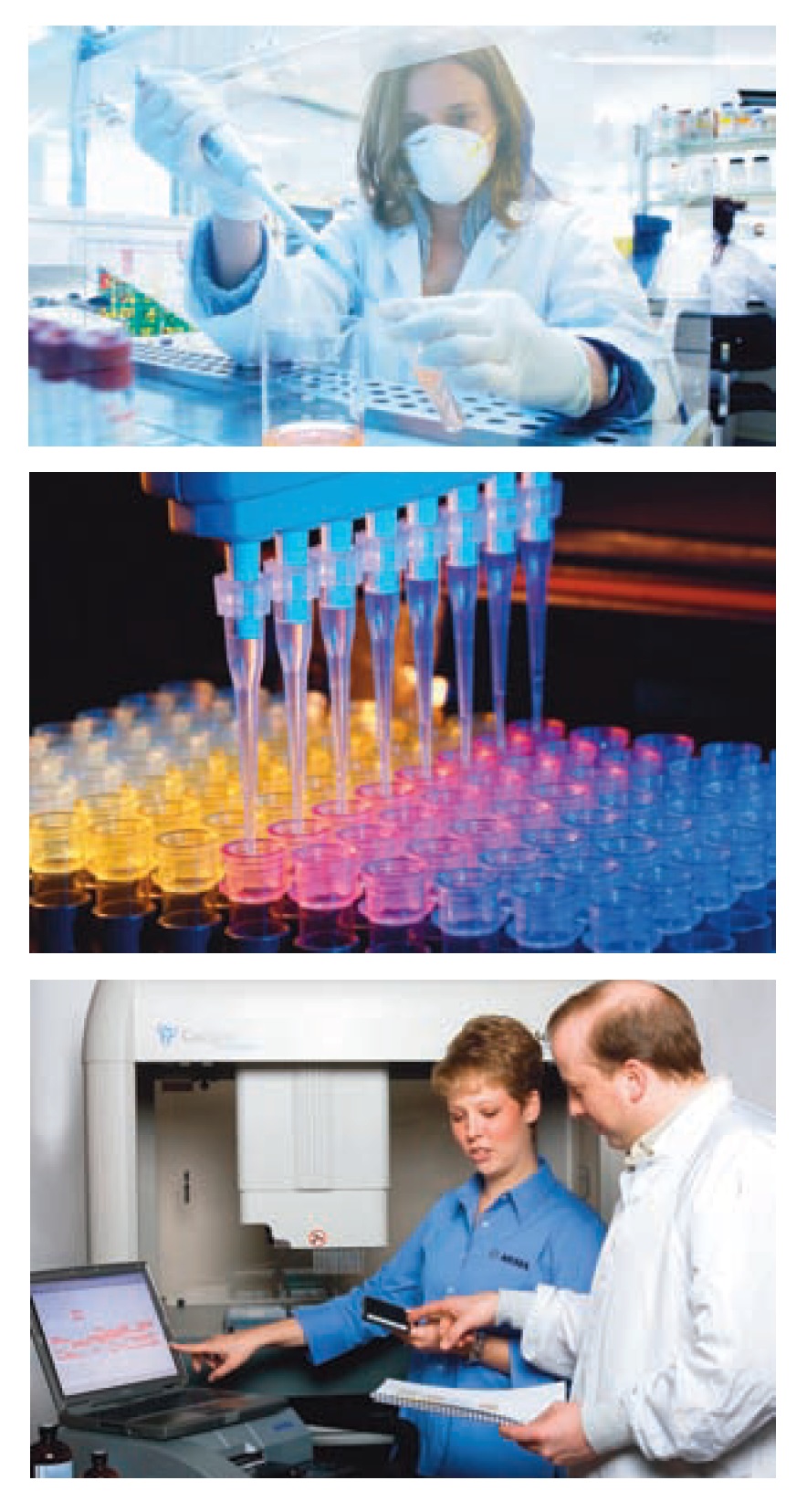 The cost of false negative and false positive results

Liquid handling instrumentation is used for a large number of critical tasks in drug discovery, from dissolving compounds into DMSO to adding enzymes to an assay plate and transferring assays from laboratory to laboratory (see ‘Where liquid handling error occurs’ subhead). Due to the minute volumes typically handled during high-throughput screening and other drug discovery phases, inaccuracies of just one microliter can affect the integrity of the process by producing false positive and false negative results.

False positive results, while not fatal to the drug discovery process, can be detrimental to overall efficiency, causing technicians to waste time and resources chasing dead ends. Today, with the growing focus on reducing the cost of drugs, pharmaceutical companies are seeking new ways to streamline R&D in any way feasible. Reducing the number of false positives pursued through the drug discovery process can decrease the number of retests, minimise reagent loss and maximise staff and equipment utilisation.

To illustrate this point, consider a typical highthroughput screening (HTS) laboratory testing approximately one million wells during each screening campaign, with anywhere from 20-25 campaigns conducted annually. While consumable costs alone have been reduced to one to five cents per well in recent years, there are a number of hidden costs to consider during HTS follow-up.

Firstly, as false positive results are pursued through subsequent stages, consumable costs swell to up to a few dollars per well.

Secondly, when reagents are expensive or in short supply, the list of compounds for retest is sometimes pared down to a manageable number, usually through computational chemistry calculations. These calculations include data from biologically active (positive) compounds so false positives make it difficult to produce an accurate computational model.

Finally, if an HTS group decides to retest all of the hits identified in a primary screen, which can be as high as 1% of the compound collection, it can take weeks to produce enough of a recombinant protein.

For these reasons, each additional screen of a compound passed along due to false positive results not only wastes compound, but also leads to delays and inefficient use of labour and equipment.

While avoidable costs are undesirable in any business, perhaps the greatest fear of pharmaceutical companies is the missed opportunity cost of false negative results. Dispensing reagents in volumes inaccurate by even miniscule amounts, especially in complex serial dilution assays, can alter concentration and prevent the identification of a reaction between compounds, the foundation for a new drug. While it is nearly impossible to estimate the value of lost revenue from this type of error, one could argue that the figure is in the billions of dollars. In this case, what you don’t know will hurt you. 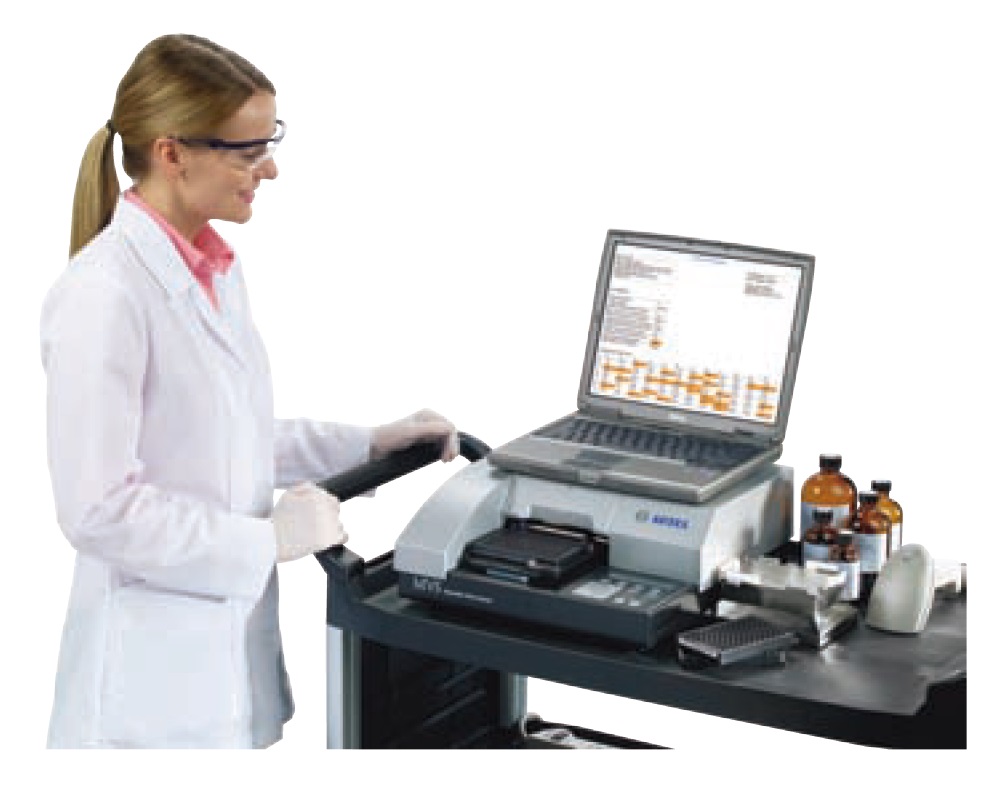 Identifying and correcting for liquid handling error early in the drug discovery process can save time, money, and resources. To design effective quality control processes, it is essential to understand where liquid handling equipment is used.

Liquid handling quality control must start as early as compound preparation and management, as compound volume errors can introduce variability into even the most robust assay. In initial compound preparation, as powdered compounds are diluted into DMSO or other liquid-based solutions, it is critical that both volumes be correct for accurate analysis later in the process.

In the HTS laboratory, automated liquid handlers are used in screening campaigns to dispense stock solutions across assay plates containing volumes of enzymes and substrates. There is potential for volume error whether dispensing compound solution from the mother plate directly to the assay plate or from the mother plate into an intermediary daughter plate with buffer solution. These errors can propagate into false positive and false negative results in the initial screen.

As a progressively smaller group of compounds is moved through each stage of the drug discovery process, from 10,000 hits in lead discovery to 1,000 in lead optimisation, to just a hundred in the lead profiling stage, liquid handling error inevitably becomes more costly. At each subsequent stage, compounds are tested more rigorously to determine their feasibility for drug manufacture, amplifying the cost of false positives. Lead profiling assays are the most expensive to run and control over liquid handling operations is vital.

Automated liquid handlers are also used when running compounds through ADMET assays, which evaluate a compound’s absorption, distribution, metabolism, excretion and toxicity properties. Because ADMET testing profiles how compounds will interact with the human body, data produced at this stage is critical in the decision to pursue or abandon further development.

It is also important to note that each time compounds are moved from one drug discovery stage to the next, an assay transfer takes place. Assay transfers are rarely seamless, and can cause process delays of one week to several months. Time wasted identifying the cause of a failed assay transfer not only erodes productivity but can also allow competitors to win the race to market with the next blockbuster drug.

While there are many causes of failed assay transfers, inaccuracy in the volume transfer process can be a major source of error, leading to a lengthy problem identification process involving parties from both the original and transferred laboratories.

For example, an assay initially developed in a therapeutic laboratory may require the addition of 50 microliters each of a compound, substrate and enzyme to a 96-well plate. In the HTS laboratory, these volumes will be proportionately reduced to one-tenth that amount for screening. If target volumes are incorrect in the HTS laboratory, the assay may not function and the screening campaign may not begin, leading to significant time delays in the drug discovery process. Verifying the performance of liquid handling equipment can remove one major source of assay variability and facilitate a seamless transfer.

How to reduce liquid handling error

While the tradeoff between quality and productivity will never truly be resolved, advances in liquid handling quality assurance are easing that struggle. One company (ARTEL) has developed the Multichannel Verification System (ARTEL MVS®) and claim it to be the only technology able to verify the accuracy and precision of each tip of an automated liquid handler in one rapid experiment.

This allows drug discovery laboratories to more frequently verify the performance of their instrumentation. As discussed, identifying and removing liquid handling errors can impart time-savings and efficiency- enhancing benefits on the drug discovery process.

This system is based on proprietary ratiometric photometry, which employs a dual-dye, dual-wavelength absorbance method for accurate and precise measurement of small target volumes. This technology relies on two colorimetric dyes with distinct absorbance maxima at 520nm (red dye) and 730nm (blue dye). The system is used to quantify volume from each dispensing channel by measuring the absorbance of these dyes.

An automated system, the MVS includes specially formulated reagents. Barcodes on the system’s microtiter plates, sample solutions and calibrator plate contain performance information that is passed to the system’s software through a barcode reader. The plate reader collects photometric measurements of the dye solutions dispensed into the microtiter wells by the liquid delivery device. Users benefit from rapid provision of information on the performance of liquid handling operations.

The MVS measurement results are also traceable to international standards, allowing comparability of all liquid handling devices regardless of model, location or number of dispensing channels. This feature facilitates assay transfer within and across laboratories. 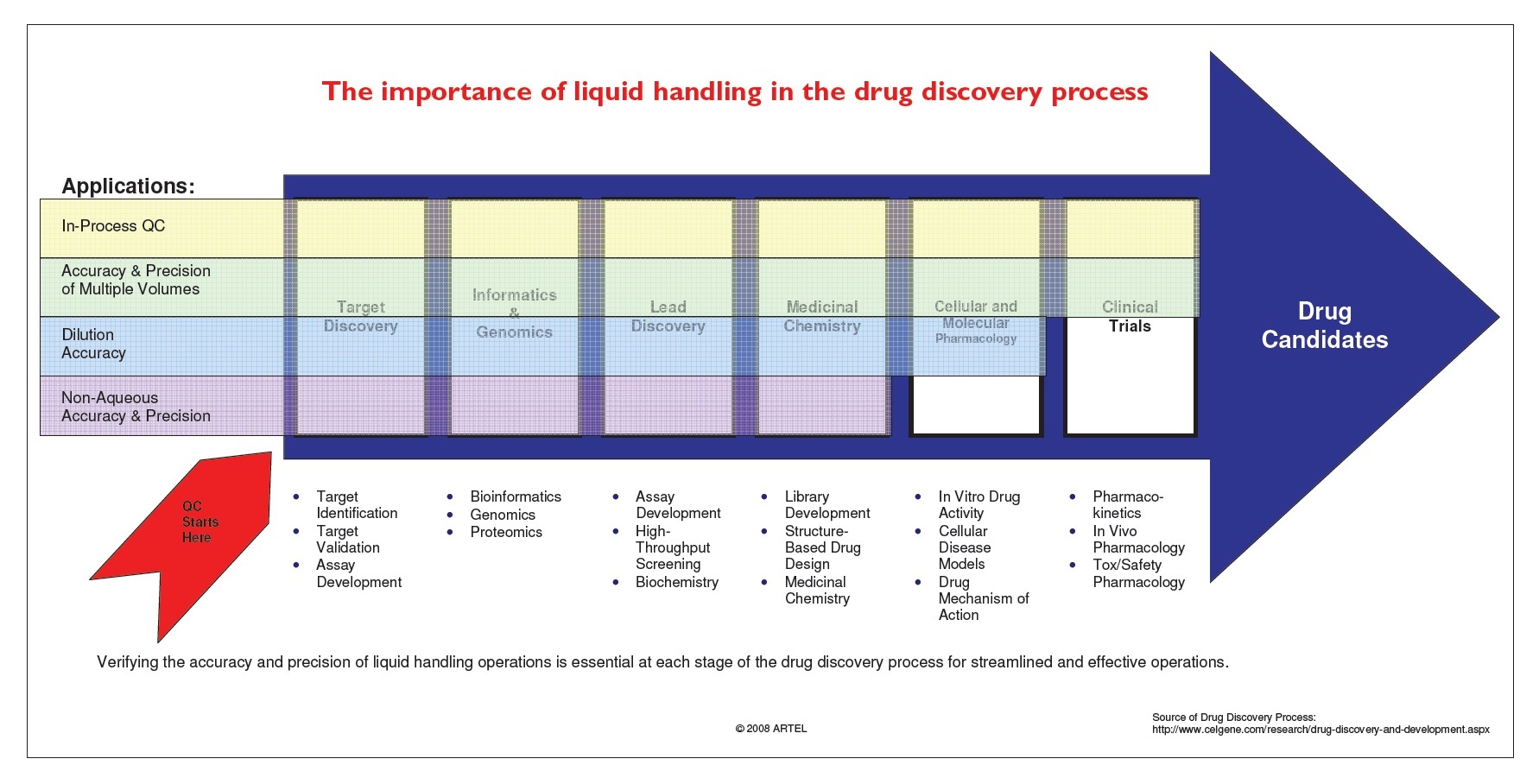 The more frequently automated liquid handlers are evaluated, the sooner malfunctioning equipment will be detected and fixed for maximum accuracy and efficiency in the laboratory. With the help of advanced quality assurance technology, drug discovery operations can be more closely controlled for liquid handling accuracy and precision without detracting from overall efficiency. DDW

Dr Nathaniel Hentz is the Associate Director of the BTEC Analytical Lab at North Carolina State University. Prior to this current role, he served as an independent consultant working with ARTEL offering guidance on its efforts toward automated liquid handling quality control within high throughput screening laboratories. Dr Hentz’s tenure in the HTS industry includes nearly two years as Senior Research Investigator at Bristol-Myers Squibb in Wallingford, CT where his team supported the fully automated screening systems within the Lead Discovery group.

Prior to BMS, Dr Hentz enjoyed seven years at Eli Lilly RTP Laboratories in North Carolina. During his tenure at Lilly RTP, he was responsible for Tier 1 ADMET screening in 2004 and led the New Technologies group. Dr Hentz received his PhD in analytical chemistry from the University of Kentucky in 1996 and joined Lilly as a postdoctoral scientist in the same year.