The Future Role of CROs 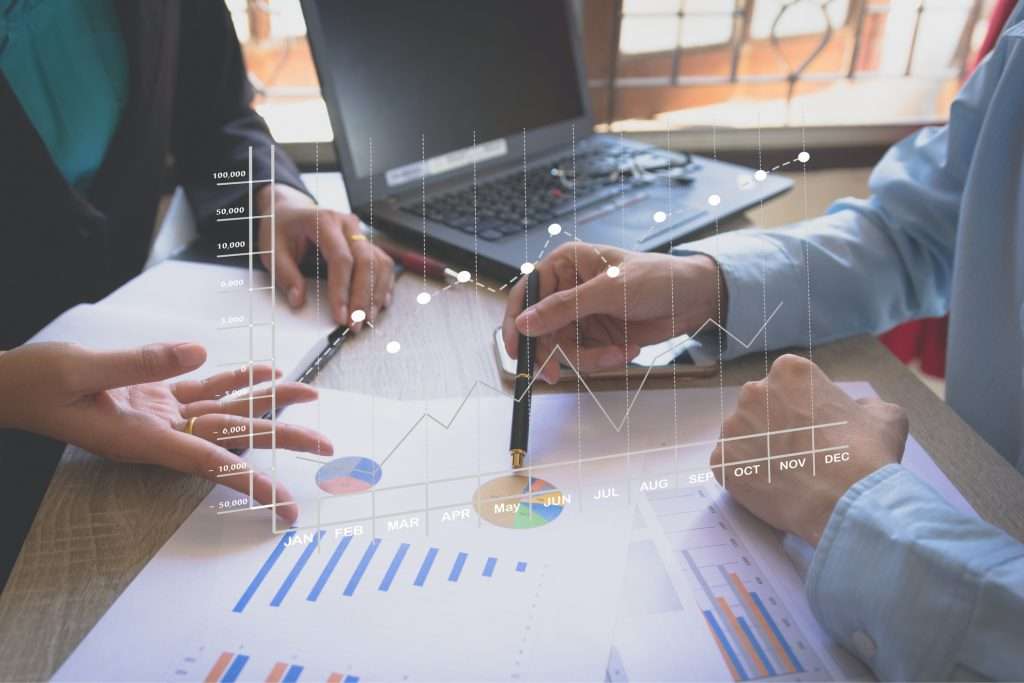 The increasing reliance by big pharmaceutical companies on CROs presents a mixture of challenges and opportunities for the industry. Given that the majority of customers are global in their reach, the CRO industry must be prepared to match that reach.

Edmund Burke, the Irish-born philosopher and statesman remarked in a letter to a member of the National Assembly in 1791 that “You can never plan the future by the past”. He could have had in mind the issues faced by the contract research industry as it enters the 21st century!

Looking at the past, it is possible to discern two distinct phases of evolution in our relatively young industry. The 1980s saw the emergence of a large number of small, privately-owned regional or niche CROs. These were seen by their customers, mainly major and mid-sized pharmaceutical companies, as the providers of resources to deal with peaks of activity.

During the 1990s there was significant consolidation activity among both CROs and their pharmaceutical customers and a new wave of activity became apparent in the form of the provision of integrated services. Customers, instead of simply looking to CROs for temporary resources, took advantage of the emerging ability of CROs to design and execute many or all aspects of, say, a clinical study or even significant portions of a development programme.

We should not run away with the idea that the integrated services wave of the 1990s completely replaced the services wave of the 1980s. During that period, both types of services were offered only by the handful of larger CROs, mainly those companies which are publicly quoted, while the hundreds of niche and regional CROs continued to meet the needs of the pharmaceutical industry through provision of specialised or local services.

This remains true today as we embark on a new wave of relationships between the pharmaceutical industry and CROs which might best be described as ‘strategic solutions’. There has been considerable debate among industry observers as to whether CROs are truly able to provide strategic solutions for some of the issues faced by the pharmaceutical industry. For example, in their recent report on the CRO industry (1), Graham Hughes and Cindy Lumley said: “The relationships between CROs and their clients are constantly evolving and encompass the purely transactional to the preferred supplier agreement. Strategic relationships although proclaimed hardly exist.”

What is undeniable is the fact that the future of the CRO industry will be inextricably linked with the future of the pharmaceutical and biotechnology industries. According to a recent Deutsche Bank Alex Brown report (2), CROs accounted for 26.8% of a development spend of $19.9 billion. The same report forecasts that CRO penetration would, by 2001, increase to 34% of a development spend of $26.4 billion. Of that CRO market, more than 70% is accounted for by the top 15 companies and it seems likely that consolidation will result in further concentration of the market in relatively few global CROs.

These companies are now able to field product development skills and resources which are comparable to or greater than those of a majority of the world’s pharmaceutical companies. It is inevitable that the relationship between such CROs and their customers will change as the parties begin to reassess their respective competitive strengths.

This reassessment is taking place at a time when the traditional vertically and horizontally integrated pharmaceutical companies are themselves undergoing transformation. Mergers followed or preceded by spin-off of non-core businesses such as agrochemical or chemical units have often been accompanied by re-engineering of key processes including those of R&D. The century-old pharmaceutical industry has had to reinvent itself in the face of price pressures, competition and a recognition that structures which have served it well through the 20th century are no longer optimal in this new information age.

The emergence of global CROs, together with the parallel growth of the biotechnology sector, has created new opportunities for the creation of new business models which are more virtually integrated than vertically integrated. These opportunities have been recognised by some pharmaceutical companies and by some CROs but it seems inevitable that pharmaceutical industry of the future will include virtual companies such as that shown in Figure 1. 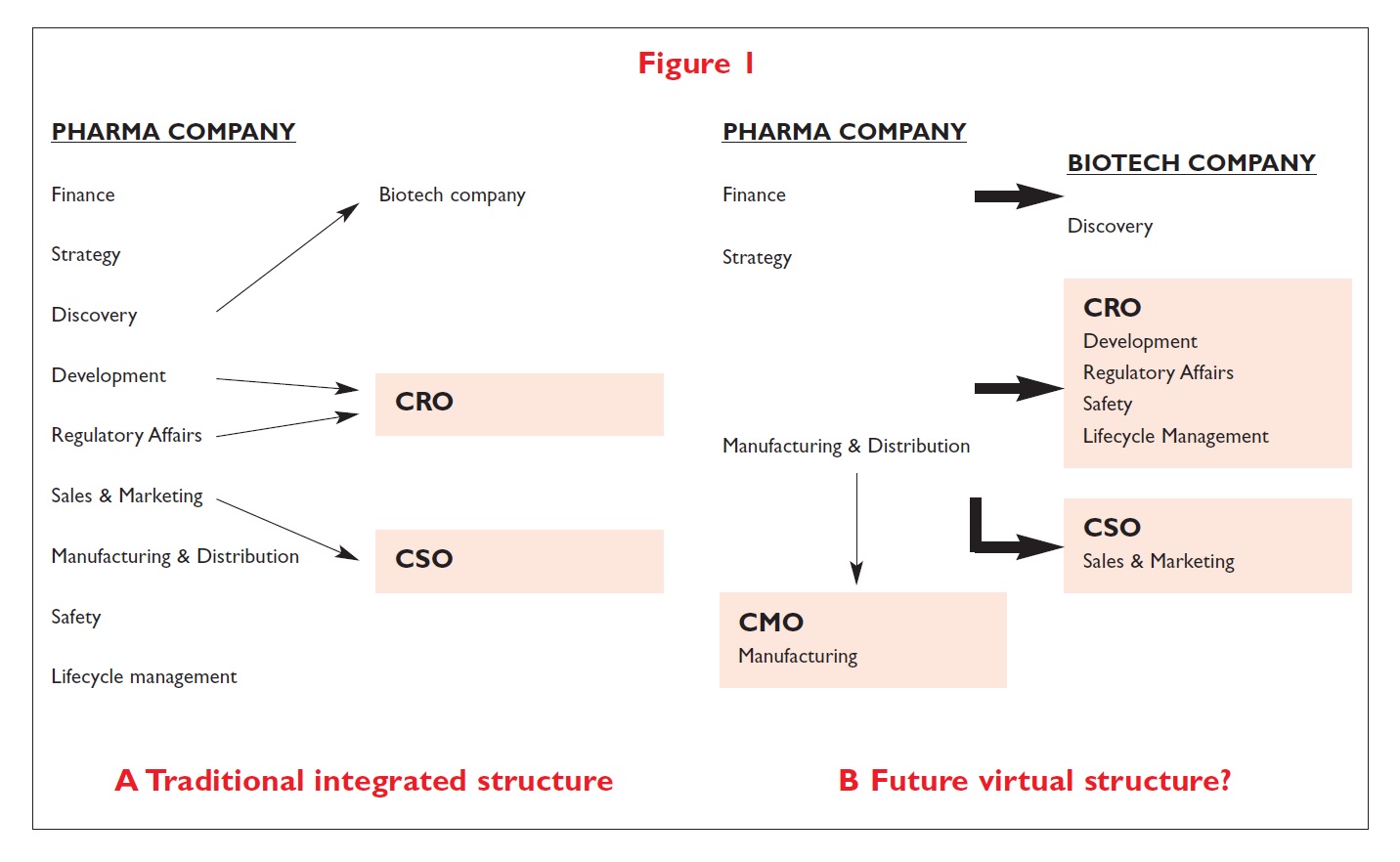 It is equally likely that some pharmaceutical companies will not embrace this new model and that the industry 10 years from now will be as heterogeneous as it has been over the past decade.

What evidence is there of this change taking place? There have been several deals in recent years which might reasonably be considered to be strategic and they certainly represent a departure from the traditional sponsor-CRO relationship. For example Eli Lily and Pharmaceutical Product Development, Inc (PPD) agreed, in 1998, that PPD would acquire rights to develop, at its expense, several Eli Lilly genito-urinary compounds. This provided a solution to Lilly’s need to rationalise its portfolio while preserving an option to reacquire the products in future.

In a deal which provided significant cost savings but which enhanced the development capacity of Hoechst Marion Roussel (HMR – now Aventis) to develop its products in the United States, Quintiles acquired the Kansas City development operations of HMR for $93 million in 1998. In return for cost reduction guarantees given by Quintiles (made possible through significantly increased use of that facility), HMR guaranteed revenues of at least $436 million and an opportunity to provide services to an additional value of $144 million over a period of five years (3).

There seems little doubt that similar deals between pharmaceutical companies and major CROs will be a feature of the future. This trend will be accelerated by the need to rationalise R&D operations following acquisition or merger activity among pharmaceutical companies. Such solutions offer opportunities for disposal of non-strategic assets on the one hand and, on the other hand, the opportunity for CROs to acquire much-needed physical and human assets to meet the demand of their businesses. 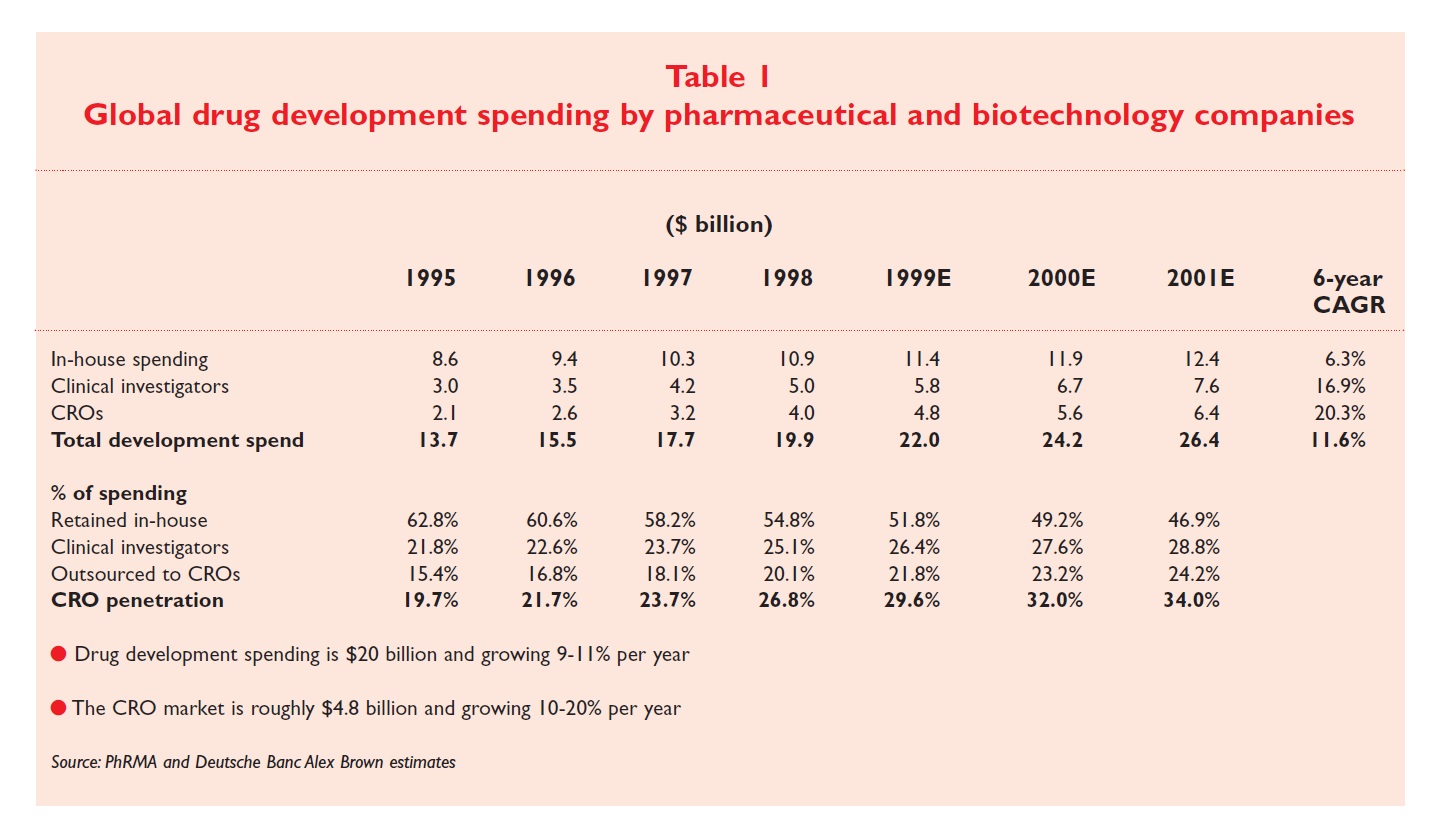 What of the future? Can we simply extrapolate trends from the past 20 years… probably not. To get some sense of future trends for the CRO industry we need to look at the challenges and opportunities faced by the pharmaceutical industry and the emerging biotechnology sector.

The 20th century saw the steady growth of large multinational pharmaceutical companies, many of which could trace their history back to the great chemical companies of the 19th and early 20th century. There was also a relatively healthy group of regional or national companies, often privately or closely held which enjoyed reasonable success through most of the past 50 years.

The emergence of regulation coupled with pricing and reimbursement barriers in the past few decades has placed a strain on the resources of large and small companies alike. The cost of discovery and development of new products has become increasingly burdensome and this has been one of the drivers behind the apparently never-ending spiral of mergers and acquisition.

For CROs, this merger frenzy among its customers creates new challenges and opportunities. The new super companies are increasing taking advantage of the reorganisation which inevitably follow a merger to rethink their approach to product development. In his review of the Biotech Industry (4), Steve Burrill described the “disintegration” of many pharmaceutical companies.

This increasing reliance by big pharmaceutical companies on CROs presents a mixture of challenges and opportunities for the industry. Given that the majority of customers are global in their reach, the CRO industry must be prepared to match that reach. If the CRO is to manage worldwide clinical development programmes it must have a strong presence in all key countries; key countries being those which comprise the major markets and those in which clinical trial patients may be found.

If they are to play a more significant role in the design as well as the execution of development programmes, CROs must hire and develop the skills and experience necessary to provide customers with expert advice. As CROs become an increasingly important participant in the development process, they must be prepared to play a more active role with regulators, health care providers and patients.

The major CROs are possibly better placed than their customers to invest in the technologies which will deliver high quality clinical data much quicker than hitherto. Web-based technologies offer enormous potential for creating a virtual clinical trial community.

Quintiles’ recently announced tie-up with Healtheon-Wed MD is intended to deliver solutions which have the potential radically to change the way clinical trials are managed, from patient recruitment to data management. Moreover, the emergence in the near future of the electronic patient record and the increasing availability of electronic tools to manage the delivery of health care have the potential to change clinical practice and facilitate the evolution of best-practice guidelines, all of which will transform the clinical trial process.

The increasing understanding of genomics and proteomics will also, in time, have profound effects on clinical practice and, of course, clinical trials. Current trials are designed to test the effects of a relatively fixed dose regimen of a medicine in a standardised population which, hopefully, is representative of the population at large. The ability through genomic technologies to identify unusual metabolisers or patients who are likely to respond to a medicine in an unusual way will increase the number of inclusion and exclusion criteria for trials carried out in the time-established way.

There are roughly 50% more compounds in development today as compared to five years ago. This increase in research productivity, fuelled by the emergence of new discovery technologies, will significantly challenge the abilities of the pharmaceutical and CRO industries alike. Some CROs are ideally placed meet this challenge and those that do will enjoy success in the new century. The pharmaceutical companies which adapt best to the opportunities provided by the best CROs will gain a critical development advantage. DDW

This article originally featured in the DDW Summer 2000 Issue