The Case for Multiplex Protein Assays 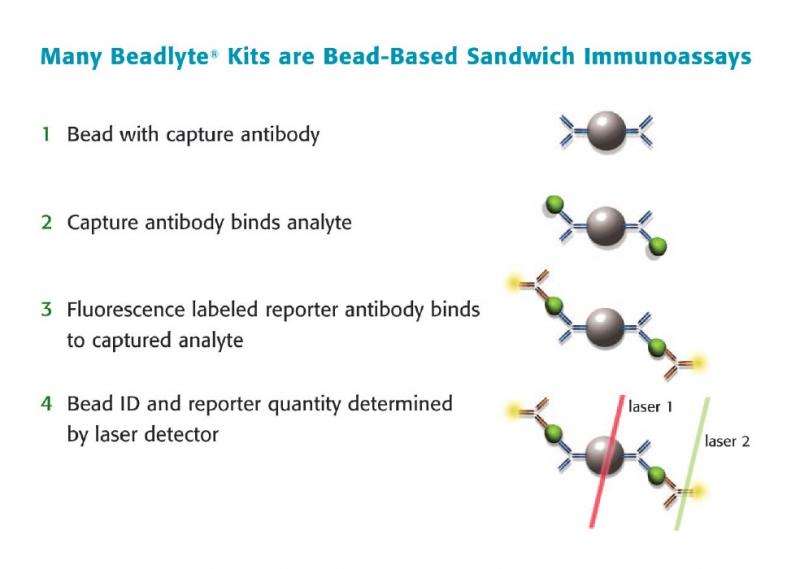 The Case for Multiplex Protein Assays

Multiplex testing has gained a growing popularity among scientists, mainly due to financial and competitive pressures forcing companies to narrow their targets and validate their leads as quickly as possible.

We discuss how multiplex assays can not only improve basic research in drug discovery, but also emerge as an essential tool for the forthcoming era of molecular medicine.

Abetter understanding of biological systems has led to a greater need for precise, quantitative and high-content protein assays for drug discovery and research. Techniques such as ELISA, Western blot, ICC and IFC assays, designed to identify single analytes, are not adequate to the task of characterising complex cellular processes, which typically involve multiple proteins or other cellular molecules.

Adapting these standard techniques for serial testing is costly and time-consuming, requiring large samples. In addition, even the best serial tests can miss subtle interactions among molecules within different pathways but linked to the same disease. It is difficult, if not impossible, to analyse these interconnected events using tests for single analytes.

As a result, the need for multiplex assays capable of rendering accurate information on diverse biological molecules simultaneously has become critical. Addressing this need is an issue for researchers trying to elucidate pathways and cellular processes as well as seeking to identify drug targets for human diseases and to monitor clinical samples. Scientists involved in drug discovery, for instance, are under increasing pressure to identify highly selective, nontoxic drugs early in the lead discovery process.

The ability to test for a definitive set of biomarkers simultaneously, rather than a series of individual analytes, can help achieve this goal. Multiplex assays offer a number of important advantages for identifying complex pathways and networks. Fewer tests are required when compared to running an equivalent series of single analyte tests, potentially resulting in less set-up time and consume fewer reagents and other supplies.

Multiplex tests are more than just an expedient and less expensive replacement for a sequence of single- plex assays. Their performance often surpasses single analyte techniques as well. Multiplexing eliminates the unwanted variability that can all too easily affect a series of individual assays, making results difficult to reproduce. For instance, with single-plex ELISA assays, a control test is performed separately, with the assumption that conditions are identical to the sample well.

A multiplex assay can include an internal standard control test for a known reference analyte in the particular sample, producing a control test that is performed under the exact conditions as the assay for the unknown analyte. Having a unified standard and assay conditions for multiple analytes removes any question regarding individual assay performance.

Most importantly, multiplex tests are an enabling technology in their own right. Multiplex assays are the only way to maximise information from extremely limited or especially fragile or precious samples. This is especially important when monitoring blood or tissue samples from patients where samples may be limited, prohibiting multiple single-plex tests.

Taken together, these benefits translate into a growing interest in multiplexing among scientists. Indeed, if sales figures are an indication, multiplexing is rapidly becoming accepted practice and will only become more ubiquitous in the next few years.

According to the market research and consulting firm Frost & Sullivan, the protein array market generated $87 million in 2002 and is estimated to have a compound annual growth rate of 31% through 2009, generating $576 million in that year. Another indicator of how well-accepted multiplex assays are becoming is the growth of multiplex consumables. A $20 million business in 2002, consumables are projected to grow at a compound annual rate of 48% through 2009.

There is a wide range of multiplex technologies, but most of them share a similar approach, commonly referred to as a ‘sandwich assay’. Capture agents are added to a sample in order to bind to one specific analyte. A reporter molecule then associates with the bound analyte, forming a sandwich consisting of the capture agent, the analyte and the reporter molecule. Using laser detection, the identity and quantity of the particular analyte can be easily determined. Spectrometric techniques such as Mass Spectrometry and Surface Plasmon Resonance (SPR) may also be used to detect the analyte. 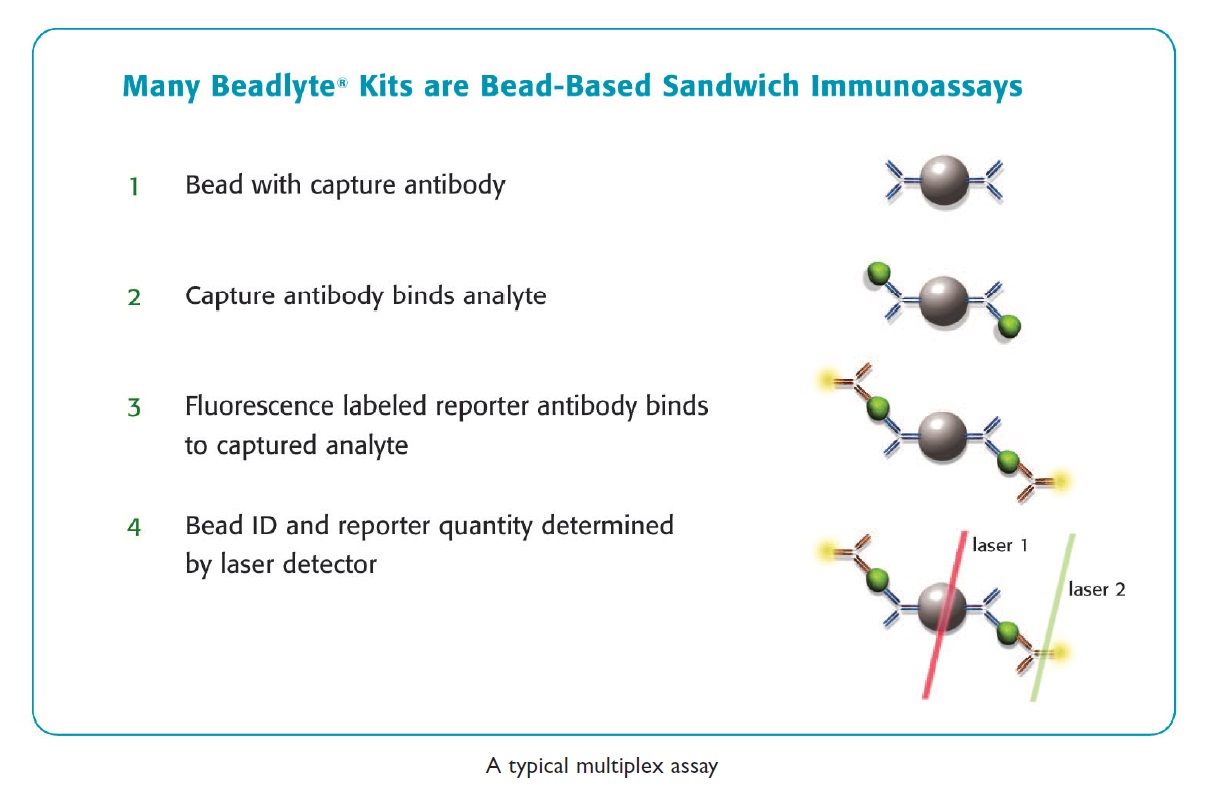 There are four major platforms used in multiplexing – slides, microplates, solution phase and microsphere suspension arrays. The platform chosen depends on the level of information that is required and the nature of the sample being analysed. For instance, multiplexing using slides is adequate for providing basic semi-quantitative information and is thus a quick and useful way of comparing two different samples. It is also useful for diagnostic procedures where the goal is to determine the presence of proteins, not necessarily to quantify them. Although Ciphergen is a leader in this area, the market is highly fragmented with many small start-ups offering slide-based multiplex assays.

In slide-based assays, the slide is spotted with a series of capture agents and then immersed in a sample. The bound analytes are then detected either by reporter agents (sandwich immunoassay) or spectrometric techniques (Mass Spectrometry or SPR). Because spotting is not a very precise process, it is difficult to accurately quantify each analyte tested. Slide-based assays also have a number of additional limitations. They require a larger amount of sample than other multiplexing platforms and do not mimic solution phase kinetics as other assays may such as suspension arrays.

Solution-phase multiplex tests use reporter molecules that are linked to specific capture agents. If the capture agent encounters its targeted analyte, the reporter molecules are released. In a system designed by Aclara, the leading company in this arena, the reporter tags are then separated, identified and quantified using capillary electrophoresis. Solution-phase multiplex tests are extremely versatile and highly accurate.

Researchers can readily customise the assay for specific combinations of target molecules. Sample size can be small and assays are highly reproducible because samples are in solution. The drawback to solution-phase multiplex tests is that creating in-house capacity is difficult, requiring retrofitting existing sequencing equipment with specialised software and training researchers. In the face of these difficulties most companies using solution-phase testing work with Aclara, which offers solution-phase tests as a service to its collaborators.

Suspension arrays (commonly known as bead arrays) offer a less expensive, less restrictive approach to multiplexing, while producing highly detailed, reproducible data comparable to solutionphase testing. In bead systems, a microsphere, or bead, is given a unique identity using a variety of different systems, including radio frequency tags, fluorescent labels and microscopic bar codes. Available capture agents include antibodies, antibody mimetics, aptamers and oligos. One of the exceptional characteristics of bead systems is the large number of biological molecules that can be tested in each sample.

Luminex Corporation, a pioneer in bead-base multiplex technology, currently offers its xMAP platform that allows multiplexing up to 100 analytes. A further advantage of bead systems is that they can be developed in-house and consequently customised. Because of the number of mature companies involved in the multiplex suspension/bead array market, researchers can select assays and vendors based on their needs. This competitive marketplace has lead to a large offering of multiplex analyte products and services driven by consumer demands.

Choosing the multiplex platform that works for you depends on a number of factors, including the kind of information you need and the nature of the sample.

The future of multiplexing

Today, multiplex assays are gaining acceptance because the intense financial and competitive pressures involved in drug discovery require companies to narrow their targets and validate their leads as early as possible in the process. This requires the ability to test for specific molecules simultaneously using small samples. Multiplex assays have already gained wide acceptance among scientists involved in basic research in drug discovery. They are also emerging as a potential tool for research and clinical studies.

Multiplex assays will allow scientists not only to be more selective in their lead candidates, but can also be used to assess the efficacy of a particular drug. After the successful completion of a trial, these same tests could be used to guide diagnosis and treatment. In essence, over the next decade, multiplexing will evolve from a research tool to a staple – and indeed a vital enabler – of the coming era of molecular medicine. DDW

Robert Huang is a business development director at Upstate USA, Inc. He holds a PhD in Biochemistry and an MBA from the Johnson Graduate School of Management of Cornell University. Robert also has biotech/pharmaceutical industrial experience working at Tularik, Inc and Abbot Laboratories.

Diem Nguyen is a strategic marketing and research director at Upstate USA, Inc. She holds a PhD in Biochemistry and Molecular Genetics and an MBA from the Darden Business School. Prior to Upstate, she was a consultant for Pharmaceutical and Life Sciences industry at Deloitte Consulting.