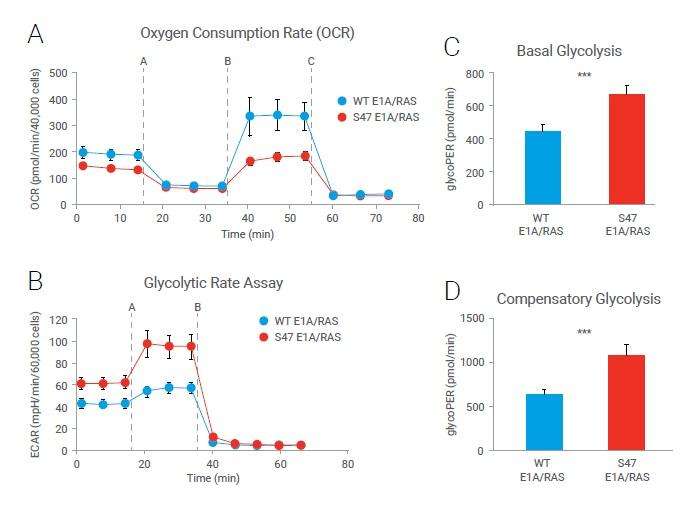 Altered energy metabolism is now recognized as a driver in many diseases. In cancer research, significant advances have been made in defining druggable targets, with metabolic intermediates emerging as promising therapeutic targets. Agilent Seahorse XF technology provides critical functional measurements in live cells to identify potential druggable gene and protein targets, and to validate their role in cancer cell proliferation, adaptation, and survival. By measuring bioenergetic phenotype, cellular ATP production rate, and mitochondrial and glycolytic function, metabolic vulnerabilities in cancer cells can be revealed to advance cancer therapeutics.

Cancer cell proliferation is a dynamic process that demands significant raw materials and energy. Conventional views have commonly inferred that cancer cells rely on upregulated glycolysis for their proliferation requirements, often characterized as the Warburg effect (1,2). However, with advancements in metabolic analysis techniques, it is now clear that some cancer cells preferentially utilize mitochondrial respiration for unregulated proliferation and survival, often in concert with downregulated glycolysis (3,4,5).

Therefore, there has been a recent paradigm shift towards understanding that cancer metabolic dependencies are not only variable across cancer subsets, but that they can also be measured to reveal cancer cell liabilities (6,7). Once identified and validated, these metabolic- pathway liabilities can be exploited for therapeutic targeting (8). Promising druggable targets for cancer metabolic therapies include oncogenes that rewire energy metabolism, intermediates in oncogene pathways, and the genes, proteins, and pathways associated with substrate and nutrient transport and utilization/oxidation.

Cancer cells undergo various metabolic changes as they acquire altered traits to adapt, survive, and metastasize in environments with varying substrate availability and oxygen concentration (9). As a result, they display profound genetic, bioenergetic, and functional differences from their nontransformed parental cells.

In the last decade, bioenergetic studies have highlighted the variability among cancer types, and even within cancer types, in the mechanisms and the substrates preferentially used for deriving this vital energy. While glycolysis (or Warburg metabolism) has long been considered the major metabolic process for energy production and anabolic growth in cancer cells, it is now clear that mitochondria play a key role in oncogenesis (10).

In addition to central metabolic and bioenergetic function, mitochondria also provide building blocks for tumor anabolism, as well as controlling redox and calcium homeostasis (6). Although a main tenet of cancer is dysregulation of normal cell metabolism that contributes to abnormal cell growth, cancer is not one disease. Thus, understanding how the metabolic pathways of a given type of cancer are rewired is critical to identify and develop opportunities for therapeutic intervention. 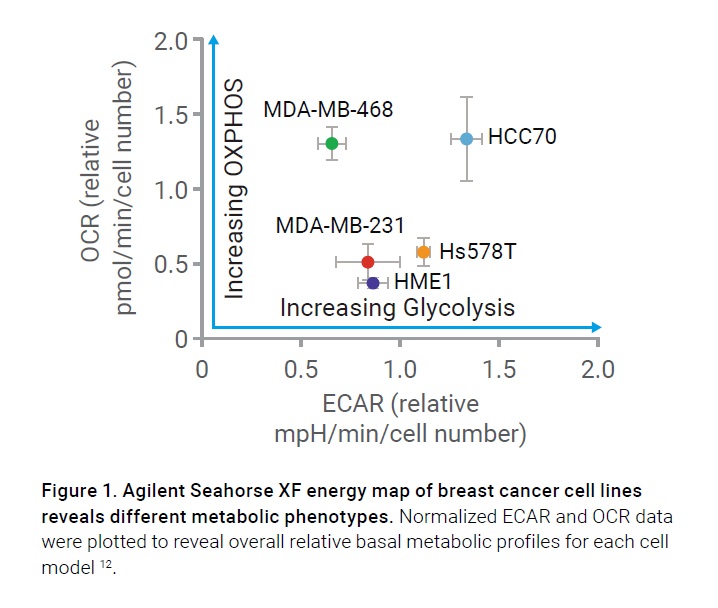 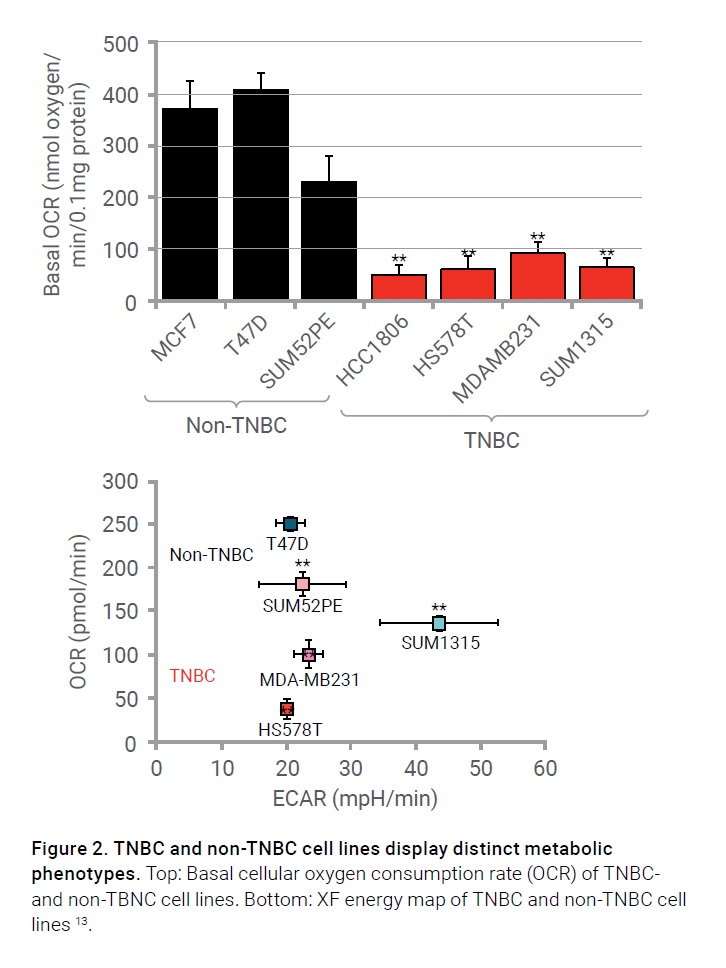 Here, the authors showed that aggressive TNBC cells have a unique metabolic phenotype associated with mitochondrial genetic and functional defects (13). These oncogenic defects impaired mitochondrial respiration and induced a metabolic switch to glycolysis, which is associated with tumorigenicity. These results suggest that metabolic phenotype could be used to identify TNBC patients at risk of metastasis and that altered metabolism can be targeted to improve chemotherapeutic response.

Based on OCR and ECAR XF measurements, a more functional and quantitative measure of the bioenergetic phenotype is to quantify the rate and source (mitochondrial versus glycolytic) of ATP production. The Agilent Seahorse XF Real-Time ATP rate assay measures the total ATP production rate in cells and distinguishes between ATP produced from mitochondrial oxidative phosphorylation (OXPHOS) and glycolysis (Figure 3 and (14)). 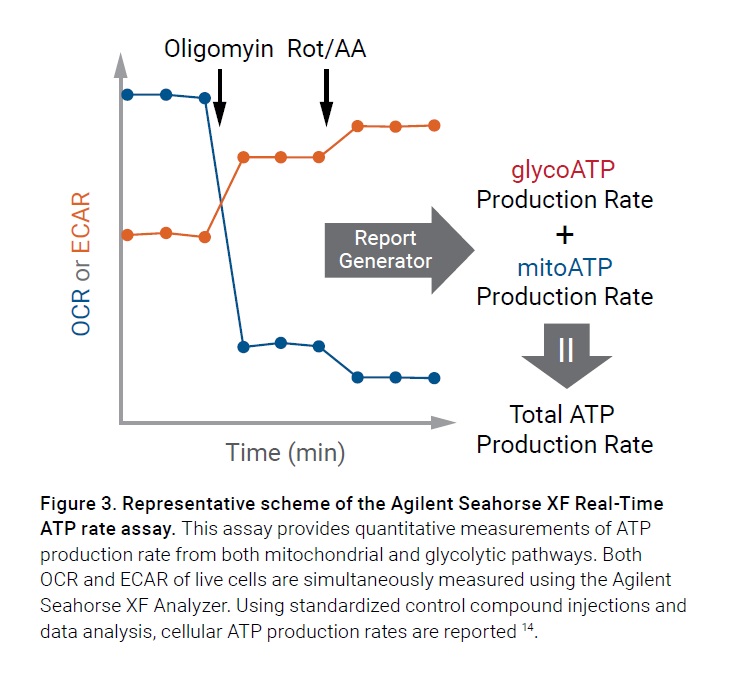 When applied to a panel of cancer cell lines, this assay shows that cancer cell lines utilize mitochondrial OXPHOS and glycolytic activities differently to meet their energy demands (Figure 4 and (15)). 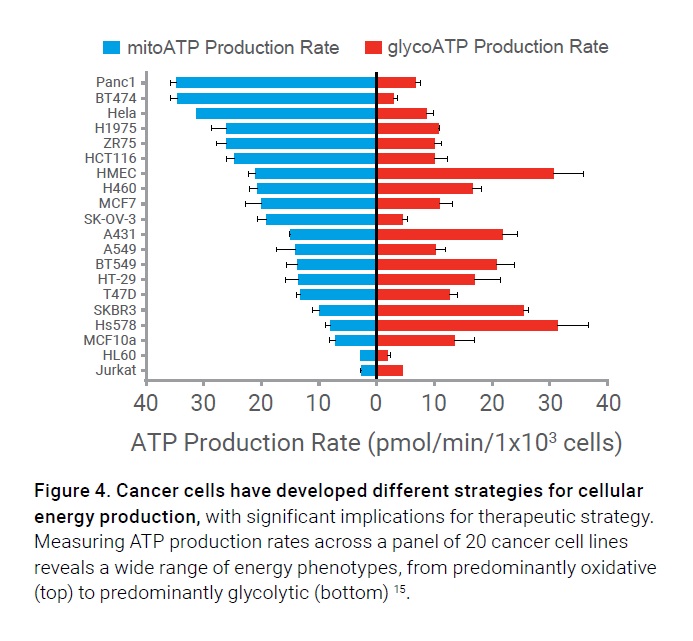 These findings underscore the fact that different cancer cells adopt unique metabolic signatures that are critical to setting the strategy for targeting a given disease subtype and determining whether a given cell line is a good model for the disease of interest. 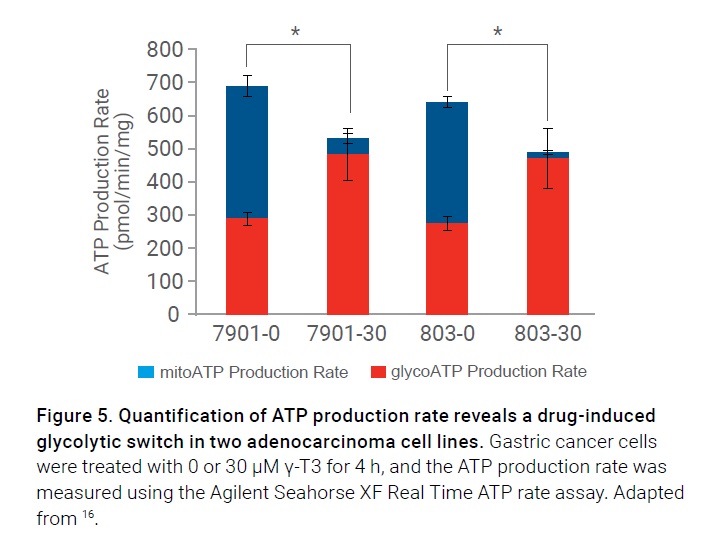 Once a change in bioenergetic phenotype is detected, further investigation often involves uncovering the mechanism responsible for the shift in metabolic poise. Thus, to gain insight into observations presented in Figure 5, further assays were performed to directly assess mitochondrial and glycolytic function in the presence of γ-T3. Using the Agilent Seahorse 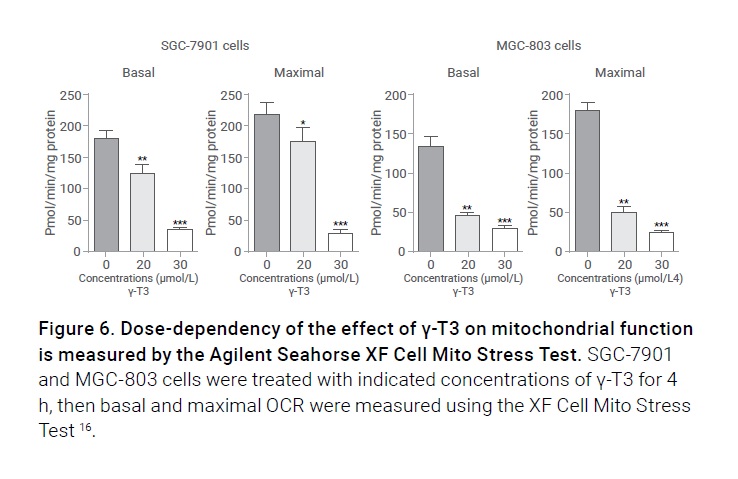 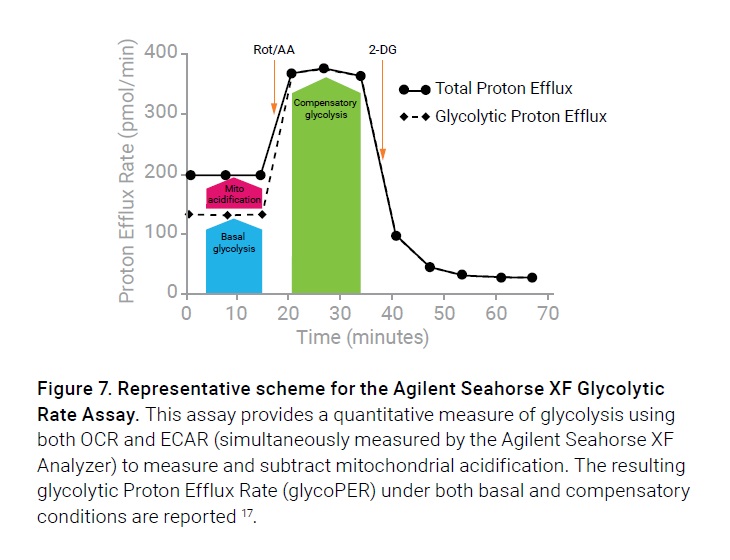 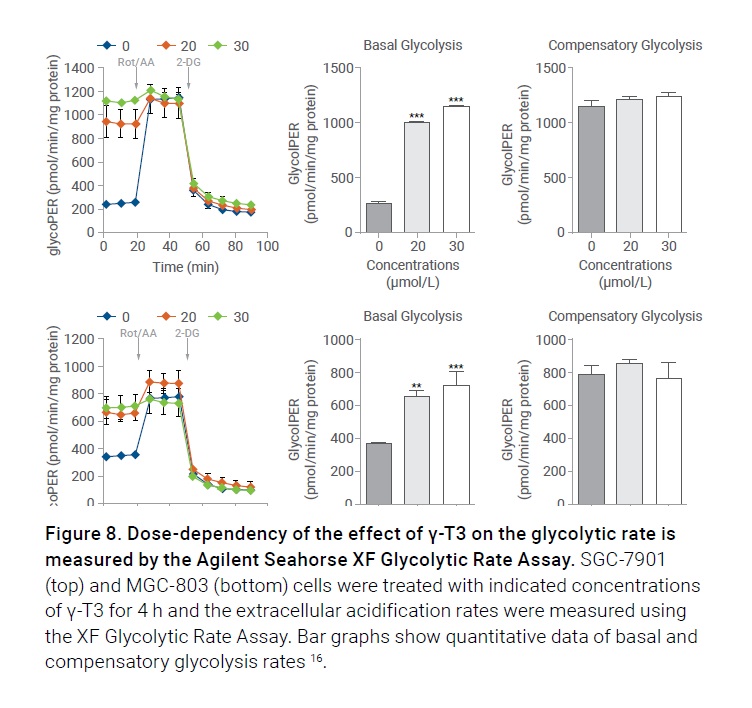 This data supports the observation of cellular ATP production switching predominantly to glycolysis, but at a lower total production rate. These results, with orthogonal data, suggest that mitochondrial function may be an effective target for anticancer drug development efforts (16).

Beyond initial classification of cancer cell energetic phenotypes, ATP production rates and the proportion of ATP sourced from OXPHOS versus glycolysis can be further used to investigate the functional effects of cancer-associated mutations. For example, evaluation of KRAS-and EGFR-mutated NSCLC cells showed distinct metabolic phenotypes concerning the source of ATP production (Figure 9 (18)). 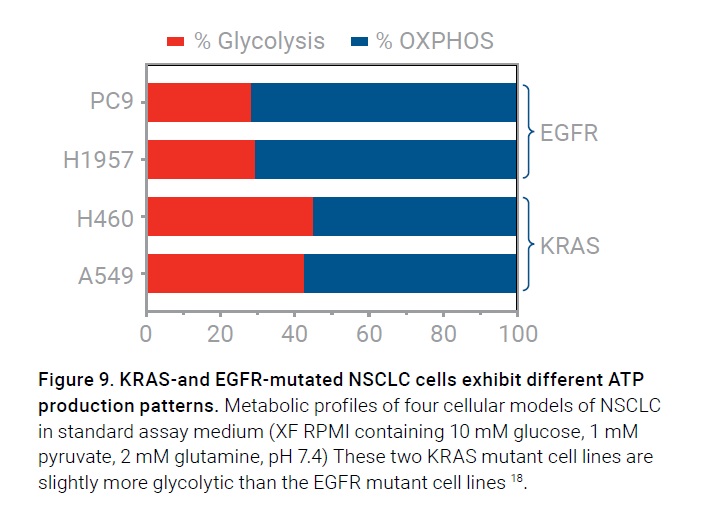 The cell lines bearing EGFR mutations were, in general, more oxidative than those bearing KRAS mutations, providing insight into metabolic vulnerabilities of cancer subsets, and EGFR as a potential therapeutic target. A study by Deribe et al. provides another example of how measurements with the XF Cell Mito Stress Test revealed mutations of well-known cancer-causing genes, which could serve as a target for metabolic modulation (19). In this study, the authors showed that mutations in the SWI/SNF chromatin remodeling complex induce a targetable dependence on OXPHOS in lung cancer cell lines. 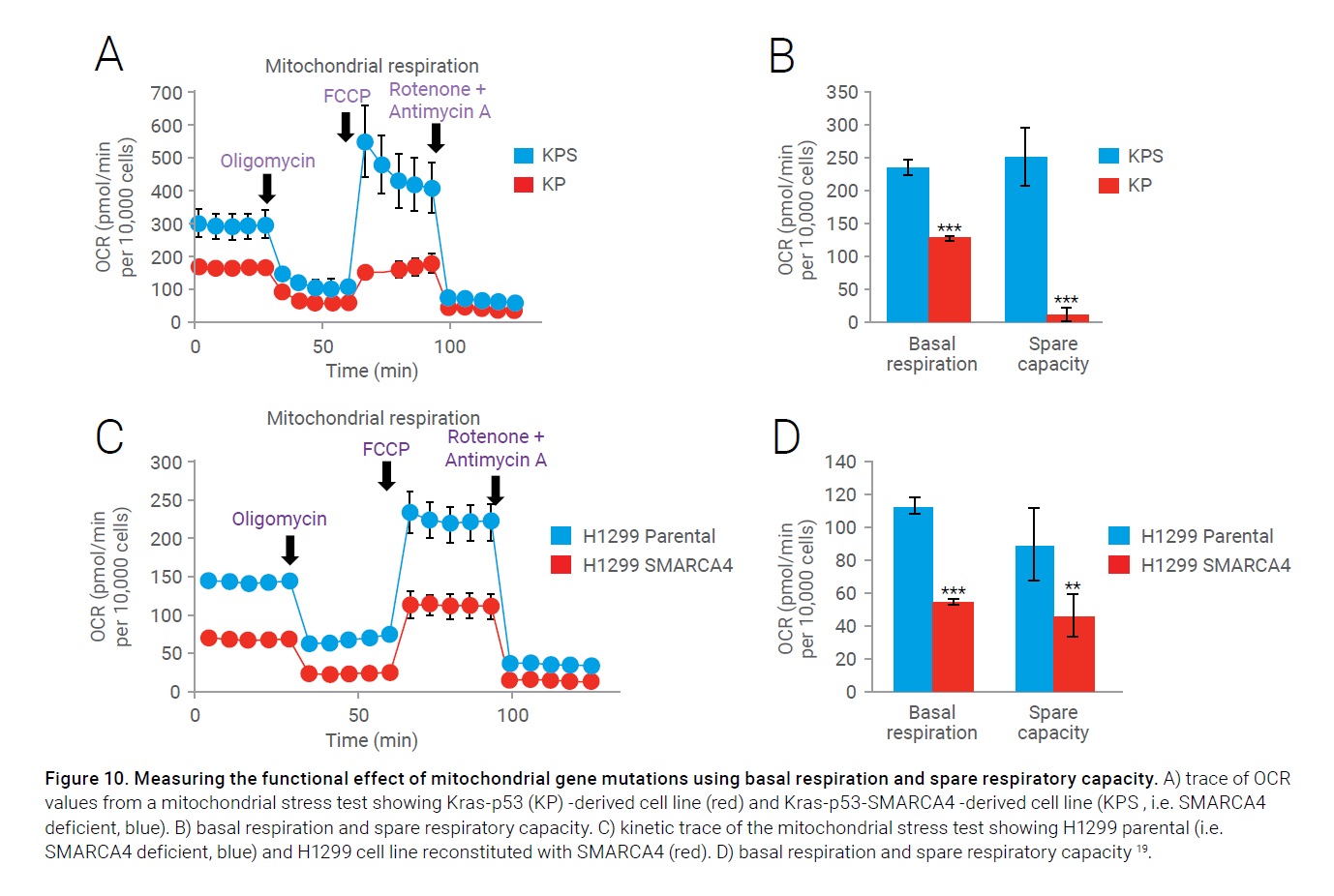 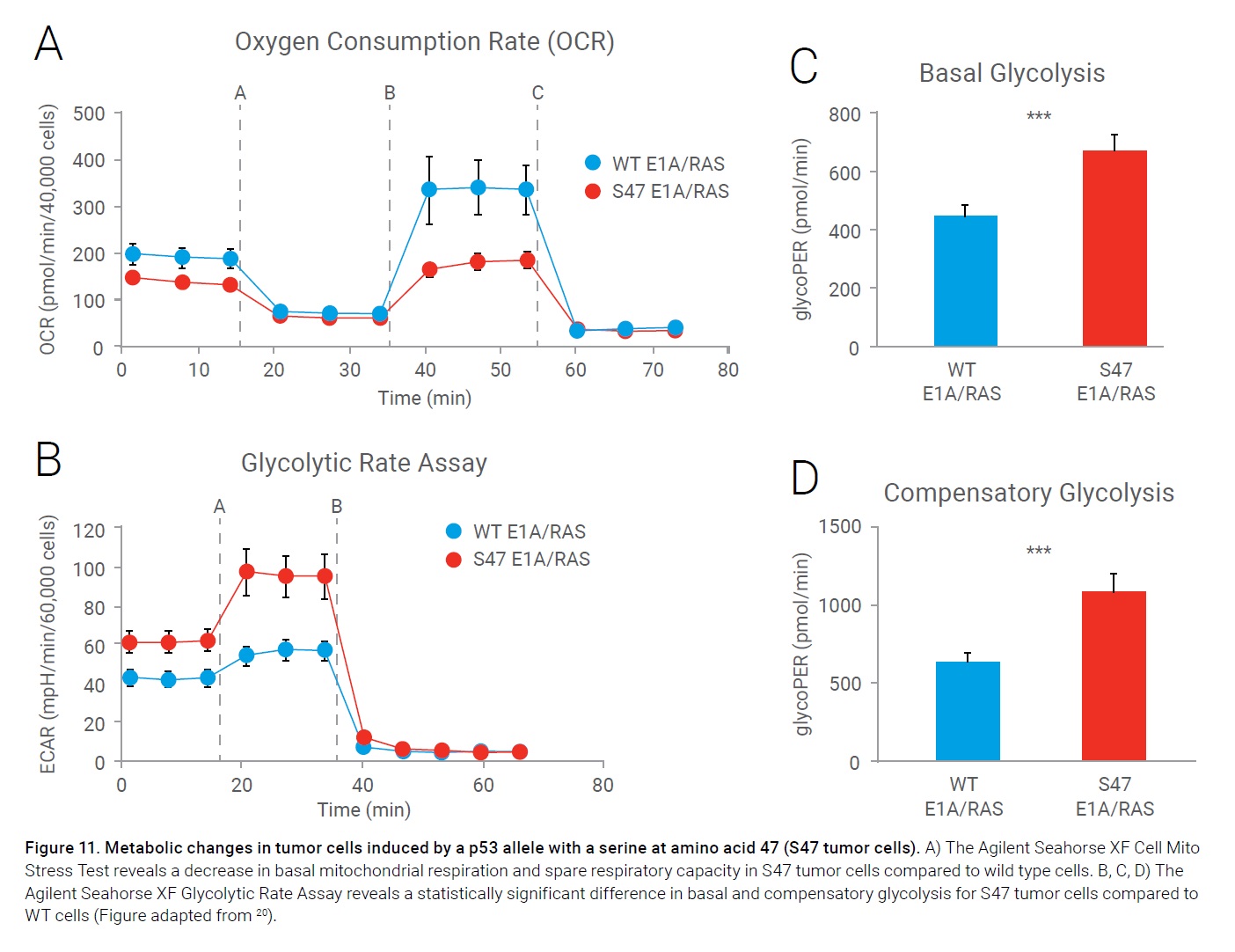 This indicates that metabolic rewiring resulted in a greater dependency on glycolysis compared to the wild type. Taken together, the results suggest that in these tumor cells, the glycolytic pathway is a potential metabolic target for S47 variant cancers. This is further supported by experiments showing increased sensitivity of S47 cells to the glycolytic inhibitor, 2-deoxyglucose (20).

To first understand changes in the bioenergetic poise between oxidative phosphorylation and glycolysis in cancer cells, it is recommended to measure the OCR/ECAR ratio. This metric is an easy-to-use indicator of changes in cell phenotype or metabolic activity. Assays that can be used to determine this ratio include the XF Cell Energy Phenotype Test, the XF Cell Mito Stress Test, and the XF Glycolytic Rate Assay.

A more functional and quantitative measure of cancer cell metabolic phenotype is to quantify the rate and source (mitochondrial versus glycolytic) of ATP production. The XF Real-Time ATP rate assay measures the total ATP production rate in cells and distinguishes between ATP produced from mitochondrial OXPHOS versus glycolysis. This assay therefore provides a detailed, functional overview of cancer cell phenotype and metabolism.

There is increasing evidence for a correlative pattern among oncogenes (i.e. the expressed protein) and effects on cancer cell metabolism regarding changes in mitochondrial and glycolytic function and the ATP production rate/ source. These metabolic changes or shifts can be potential targets for anticancer therapeutics.

This white paper was sponsored by Agilent, you can download the orignal PDF here.