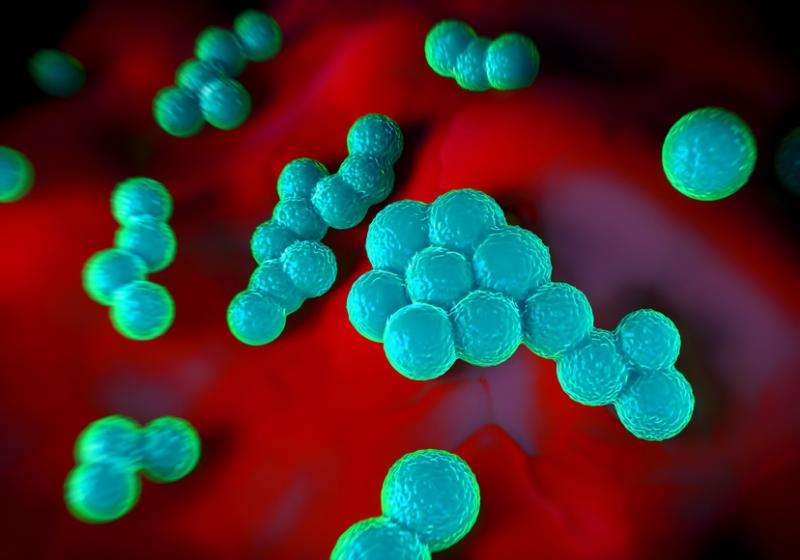 Antibiotic resistance never should have become the public health crisis we are seeing today. As a society, we thought the problem of bacterial infections had been solved decades ago when more than 200 powerful antibiotics representing different classes such as beta-lactam, tetracyclines and macrolides were developed.

Names such as amoxicillin, clindamycin and erythromycin have become well-known among consumers. Signs of resistance to antibiotics appeared almost immediately and continues to plague our healthcare systems.

The CDC estimates that every year, at least 2 million people are infected with drug resistant bacteria. Of these, 23,000 will die. The financial cost to the US is expected to range from $20 billion to $35 billion. On a global scale, the numbers are equally frightening.

The World Health Organization estimates 700,000 people will die worldwide each year from multidrug resistant micro-organisms. Premature deaths could reach 10 million annually by 2050, according to the United Kingdom’s Review on Antimicrobial Resistance. That could cost the global gross domestic product (GDP) $100 trillion in economic productivity.

Today, the alarm bell about antibiotic resistance is sounding more loudly than ever, with several recent scares fresh in public officials’ minds (Table 1). 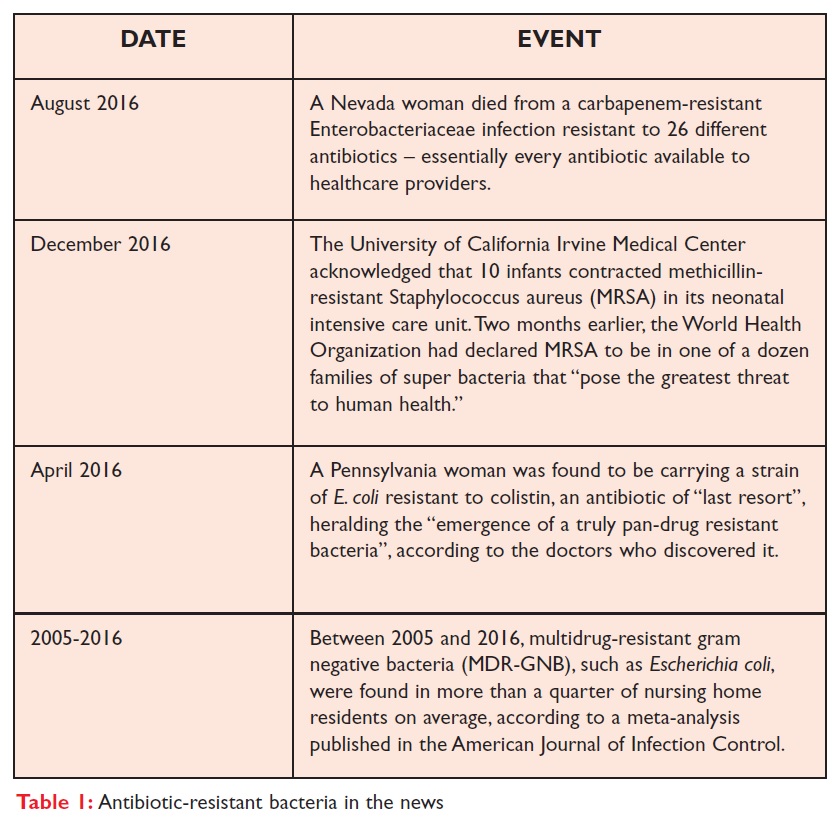 Looking ahead, the problem of antibiotic resistant bacteria shows no sign of abating unless new strategies for developing novel antibiotics take hold.

The 21st Century Cures Act of 2016 further clears the pathway to patients with new FDA approval schemes for serious or life-threatening infections. This provision is expected to speed approval of new antibiotics, especially for multi-drug resistant micro-organisms.

Other government groups have acted more directly, investing in early development of new antibiotic molecules and strategies. The US National Action Plan on Combatting Antibiotic-Resistant Bacteria (CARB) launched its accelerator, CARB-X, in 2016 with $500 million to jumpstart antibiotic development. CARB-X released its first tranche of $48 million to 11 biopharmaceutical companies in 2017.

Similarly the Biomedical Advanced Research and Development Authority (BARDA), part of the US Department of Health and Human Welfare (DHHS), has committed up to $250 million over five years to support new antibiotic development.

Acknowledging that there have been no new antibiotics developed in the past 30 years, the United Kingdom established the Antimicrobial Resistance Centre (AMR Centre) to support startup work with $236 million with a goal of moving 20 new medicines into pre-clinical development by 2020 and advance 10 of those to clinical trials by 2022.

The AMR Centre recently issued a call to action to the G20, an international forum for the governments and central bank governors from 20 major economies, to commit investment in research, innovation and development of innovative health technologies to counter threats from antimicrobial resistance.

To better diagnose the problem, the US National Institutes of Health (NIH) completed the first phase of its Antimicrobial Resistance Diagnostic Challenge, a federal competition that will award up to $20 million in prizes for the development of rapid, point-of-need diagnostic tests to combat drug-resistant bacteria. Ten semifinalist were selected and each received $50,000 to develop their concepts into prototypes.

While policy initiatives and government funding are a major step forward, they will not be sufficient to solve this problem. In its Scientific Roadmap for Antibiotic Discovery, The Pew Charitable Trusts concluded that the biggest barriers to finding new classes of antibiotics are not regulatory or financial: they are scientific.

There has not been a novel antibiotic class approved for use against Gram-negative infections in the last 40 years. However, the lack of novelty is by no means an indication of lack of effort devoted to this cause.

Across the public, private and academic industries many extensive drug discovery endeavours have been undertaken, only to come up short of a novel therapeutic. The reason for these numerous failures lies in the inability to get good inhibitors to their targets in Gram-negative bacteria. The structure of a bacteria’s cell wall determines whether it is Gram-positive or Gram-negative (Figure 1). 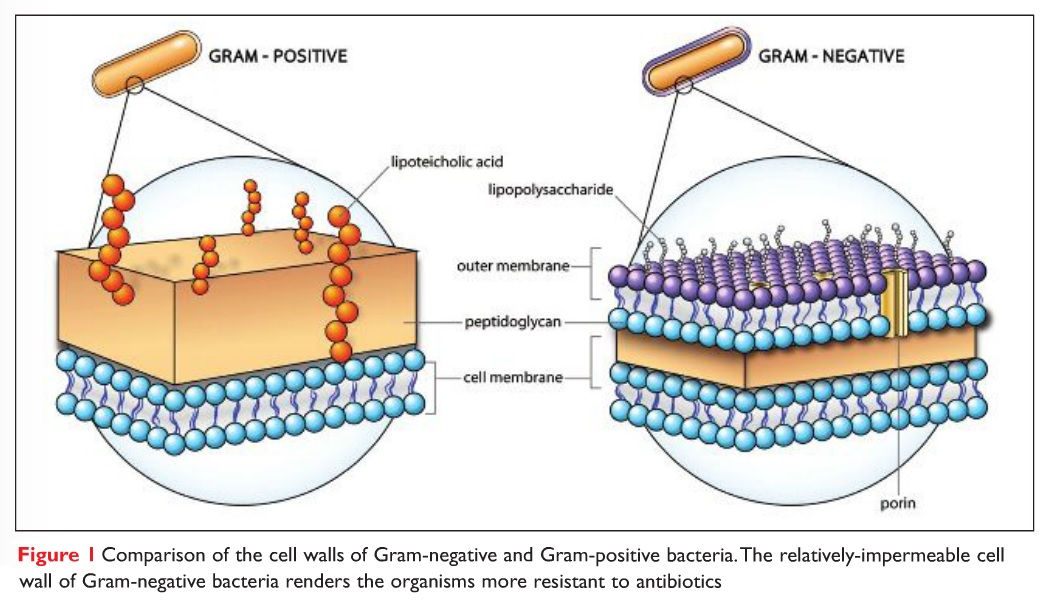 The Gram-positive cell wall consists of a thick peptidoglycan layer and a phospholipid membrane, while Gram-negative bacteria possess an inner membrane consisting of phospholipid, a thin peptidoglycan layer, plus an outer membrane. The outer membrane of Gram-negative bacteria is an asymmetric bilayer composed of glycerol phospholipids and lipopolysaccharide (LPS). LPS acts as a barrier against toxic compounds, including antibiotics, whose targets typically reside within the inner membrane.

In a 2016 study update, the Pew Charitable Trusts surveyed antibiotics currently in clinical development and made a disheartening prediction: of the dozens of antibiotics in clinical development, only one in five are expected to be approved for use. Despite the seeming doom and gloom, a number of novel strategies have begun to emerge for combating antibiotic resistant bacteria, especially for those of the Gram-negative type. The approaches can be grouped into a number of categories including activating existing antibiotics, indirect therapeutics, biologics and small molecules.

A company in the US, Spero Therapeutics, is developing a series of novel chemical entities – Potentiators – that specifically interact with the outer membrane of Gram-negative bacteria to disrupt and increase the membrane’s permeability (Figure 2). This increase in permeability allows both novel and existing Gram-positive antibiotics to enter and kill the cell. 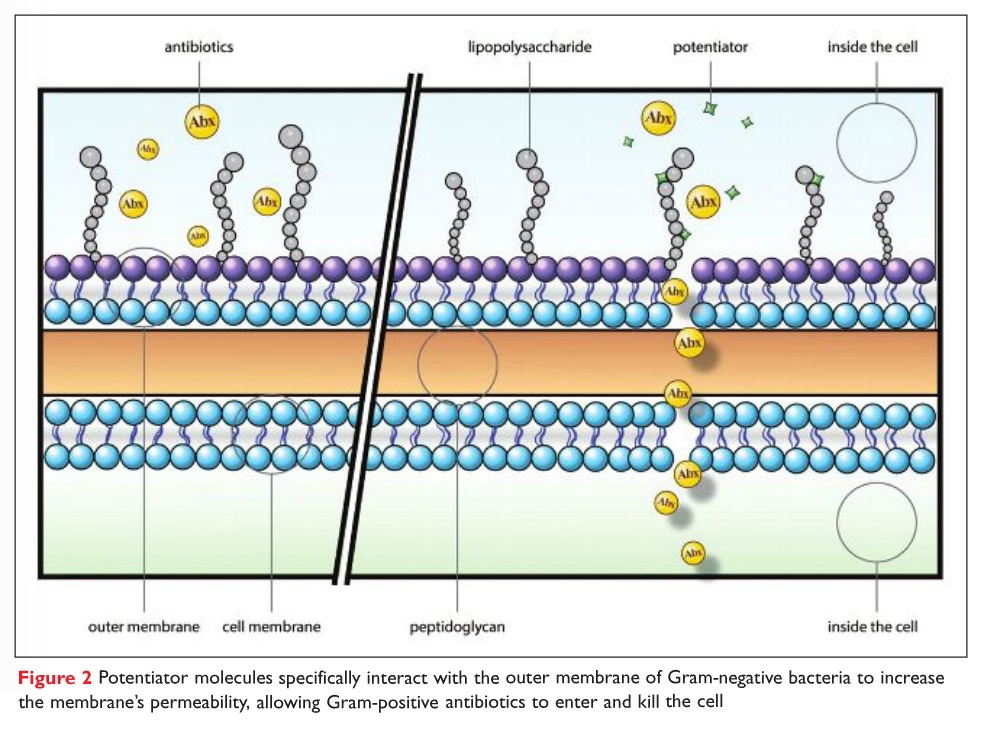 The first Potentiator candidate, SPR741, a derivative of polymyxin B currently being evaluated in a Phase I clinical trial, sensitises Gram-negative bacteria to antibiotics normally excluded by the outer membrane.

Prior to initiating our clinical trial, we used bacterial cytological profiling (BCP), a microscopybased technique that provides insight into the mechanism of action for antibacterial compounds, to define how SPR741 enhances sensitivity of Gram-negative bacteria to Gram-positive antibiotics.

In this study, we assessed SPR741 alone and in combination with fluorescently-labelled azithromycin (a macrolide) or Bocillin (a penicillin), to observe uptake into Escherichia coli. Cytological profiling and cytometry results demonstrated that SPR741 permeabilises the outer membrane of Gram-negative bacteria, such as E.coli, allowing normally impenetrant antibacterials into the periplasm and cytoplasm (Figure 3).

Preclinical studies show that by disrupting the outer membrane, SPR741 enables more than twodozen classes of existing antibiotics normally only effective against Gram-positive bacteria to enter and destroy the now-relatively defenceless Gram-negative bacteria.

Figure 4 shows results from a study of the in vitro efficacy of combinations of SPR741 with conventional antibiotics against Escherichia coli (Ec), Klebsiella pneumoniae (Kp), and Acinetobacter baumannii (Ab).

Green arrows indicate that the MIC of the antibiotic has been reduced to, or below, the Clinical and Laboratory Standards Institute (CLSI) or European Committee on Antimicrobial Susceptibility Testing (EUCAST) breakpoint for susceptibility for this organism/antibiotic combination, or where this information is not available, below the equivalent breakpoint or epidemiological cut-off values (ECOFF) for Staphylococcus spp.

Instead of killing the bacteria directly, some strategies focus on blocking the bacteria’s virulence. For example, Microbiotix, Inc has developed a strategy that interferes with the Type III secretion system of Pseudomonas aeruginosa, a bacteria which produces a toxin that plays a major role in ventilatorassisted pneumonia. Preventing release of the toxin should block disease progression.

The war between the microbes has raged for gigamillennia. No battle is fiercer than the struggle between bacteria and specialised viruses that prey on them called bacteriophage. To release their progeny from inside an infected bacterial cell, phage encode a number of products called lysins that disrupt the bacterial cell wall, rupturing it and killing the bacteria. The idea to use bacteriophage lysins as a medicine has been around for decades, but the advent and success of antibiotics shelved most projects.

With the rise of multi-drug resistance, lysins are experiencing a renaissance. ContraFect Corporation, for example, has identified 48 lysins that can directly bind and disrupt the cell wall of Gram-negative bacteria, killing them on contact. The company’s first bacteriophage-derived lysin has entered clinical trials.

In one interesting approach, Visterra Inc developed a monoclonal antibody that specifically targets Pseudomonas, and to which is chemically linked a bactericidal peptide that directly kills the bacteria.

Bacteria have been evolving for billions of years and have a head start on us. A study of ancient bacteria recovered from Arctic permafrost found antibiotic resistance genes existed tens of thousands of years ago, having evolved to defend bacteria against the antibiotics made by other micro-organisms.

After decades of a relatively more relaxed view in the fight against antibiotic-resistant bacteria, government and industry have a renewed, more aggressive focus. Most of the antibacterial molecules in use today came from microbes themselves and may be considered the low hanging fruit. Scientists isolated antibiotics from nature and chemically tweaked them to produce related classes of drugs. Fortunately, innovative strategies to attack bacteria are being pursued, giving us hope that the tide may be ready to turn in the battle against antibiotic resistance.

This article originally featured in the DDW Summer 2017 Issue

Dr Ankit Mahadevia is the CEO of Spero Therapeutics. He was formerly a Venture Partner in the life sciences group at Atlas Venture. In that capacity he supported the formation of eight companies focused on novel drug discovery platforms and therapeutic products, three of which he led as Acting CEO.