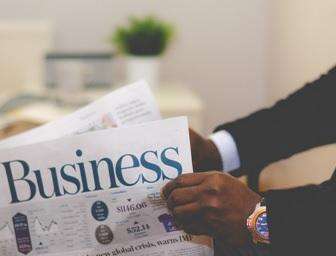 The use of the Public Relations (PR) industry to promote all facets of the pharmaceutical industry is on the increase. We take a brief look at the various uses of PR and the sectors that are being promoted.

Public announcements of scientific, clinical, business and financial milestones have become an integral part of the Pharmaceutical and Biotechnology industry. Companies make use of PR firms, conferences, websites and other media to announce scientific accomplishments, development and regulatory milestones, financial results, deals and alliances and management changes. Most of these announcements appear in press releases and many of these are distributed as e-mails through the Internet. Millions of potential readers can be contacted in minutes.

The content of these press releases is then rewritten into hundreds of secondary media for both trade and popular audiences, with varying degrees of interpretation and accuracy. In 2002, there were more than 33,000 press releases issued by nearly 2,700 companies involved in drug discovery and development, diagnostics, bioinformatics, medical devices and equipment. The number of secondary stories would be many times these figures.

There are a number of reasons why companies issue these press releases. Public companies have a legal obligation to announce all material changes and developments. Small companies often use press releases as a form of advertising, either to investors or to potential corporate partners, although the timing and use of these press releases has often created conflicts with peer-reviewed journals. There is considerable flexibility in the way this content is presented, and ample opportunities to apply ‘spin’ of one form or another, so that most press releases now include a warning label.

Here is an example from Sepracor:

“This news release contains forward-looking statements that involve risks and uncertainties, including statements with respect to the safety, efficacy, potential benefits and successful development and regulatory approval of the company’s pharmaceuticals under development. Among the factors that could cause actual results to differ materially from those indicated by such forward- looking statements are: the results of clinical trials with respect to products under development; the submission, acceptance and approval of regulatory filings; the scope of Sepracor’s patents and the patents of others; the commercial success of Sepracor’s products; the ability of the company to attract and retain qualified personnel; the performance of Sepracor’s licensees; the availability of sufficient funds to continue research and development efforts; the continued ability of Sepracor to meet its debt obligations when due; and certain other factors that may affect future operating results and are detailed in the company’s quarterly report on Form 10-Q for the quarter ended September 30, 2002 filed with the Securities and Exchange Commission.”

The top 20% of issuers of press releases accounted for 56% of the total number (Figure 1). 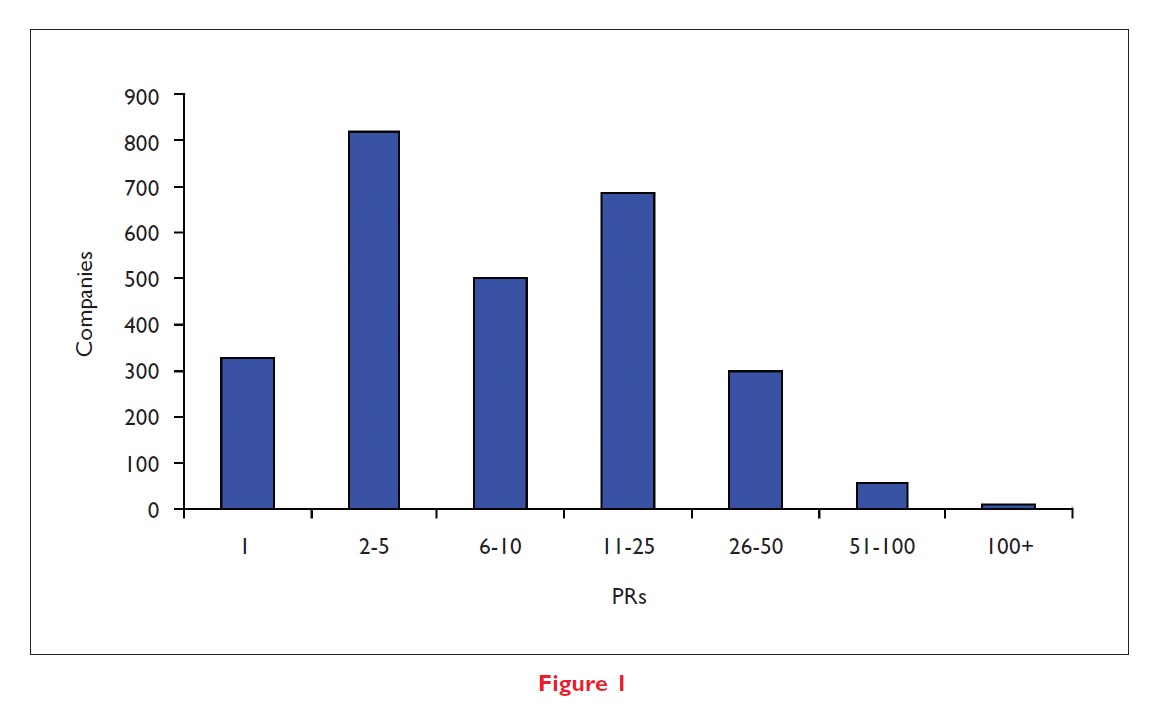 There were significant differences between the activities of public versus private companies. Public companies, which represented 48% of the number of companies issuing press releases, accounted for 79% of the total number of press releases. This represented an average of 20 per public company, compared with five for each private company. Some of these differences may be accounted for by the financial reporting requirements of public companies, or by the fact that public companies are, on average, larger, but this may also reflect the demands of the investor community for news.

There were also differences between European and North American companies, with the former issuing about 10 each, and the latter around 14. There is some seasonality to the number of press releases issued, as seen in Figure 2. 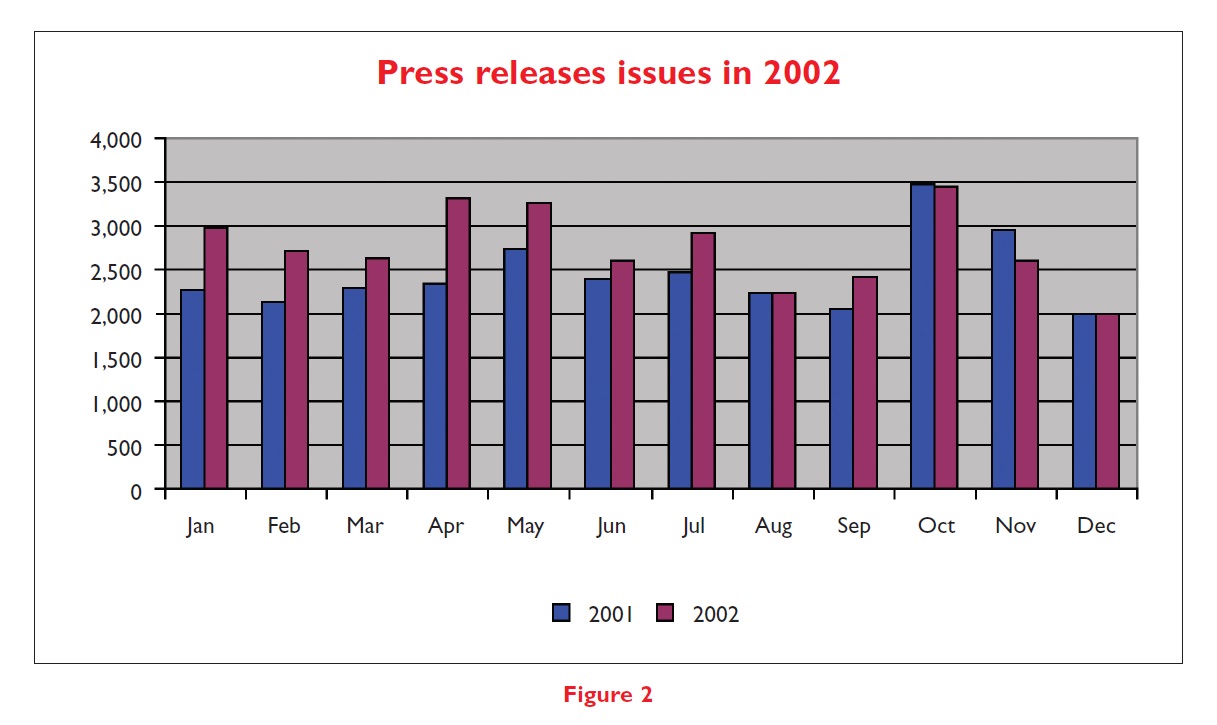 Note that all of the data presented below have been determined by examining the content of headlines and summary first paragraphs, rather than the full text of press releases.

Approximately half of all press releases fall into three categories: Deals and Alliances, Financial Reports and Financings and Development and Regulatory (Table 1).

There were large differences in the numbers of press releases relating to specific clinical areas (Figure 3): 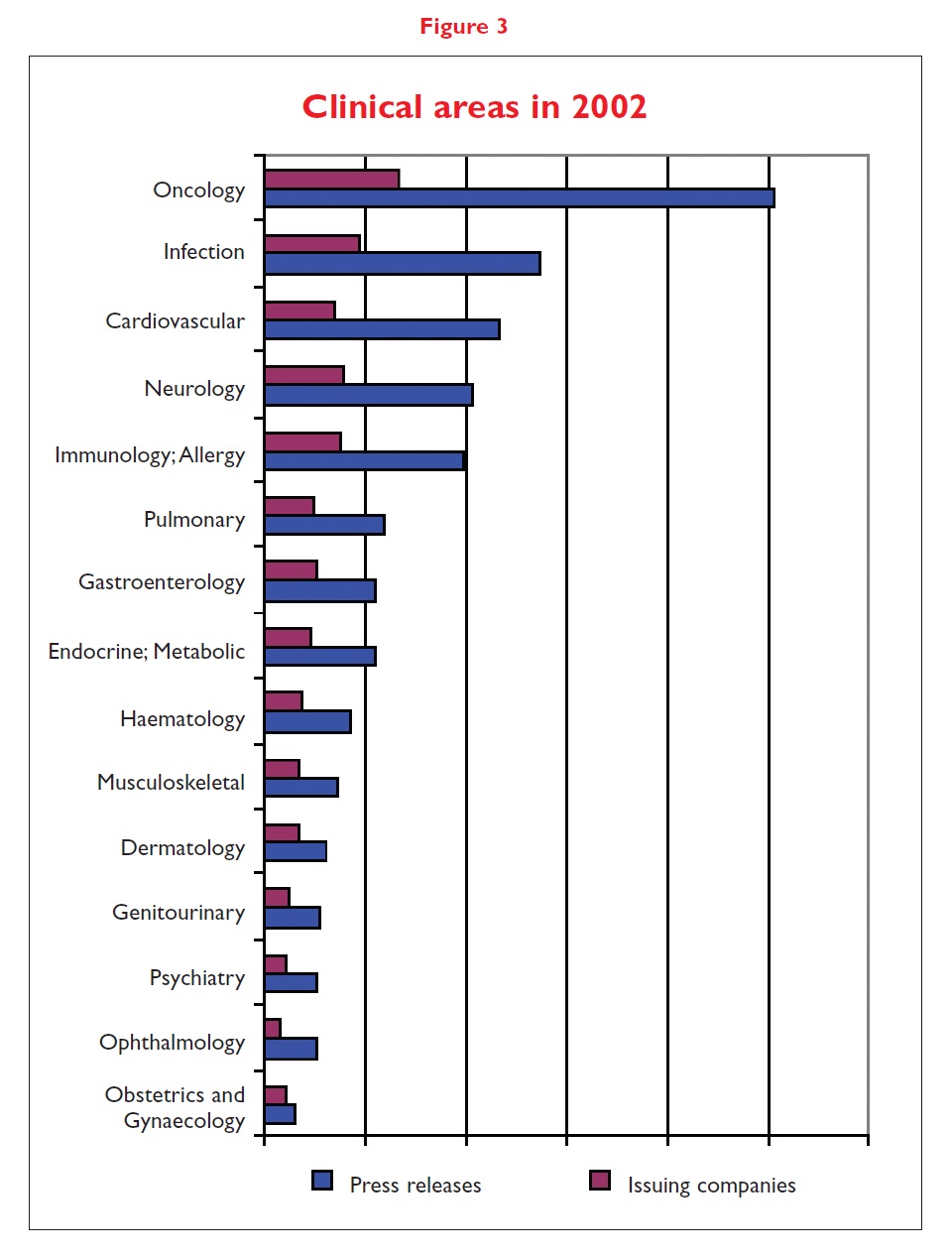 This pattern is unchanged from 2001, and is very similar to the pattern for deals and alliances (Table 2). 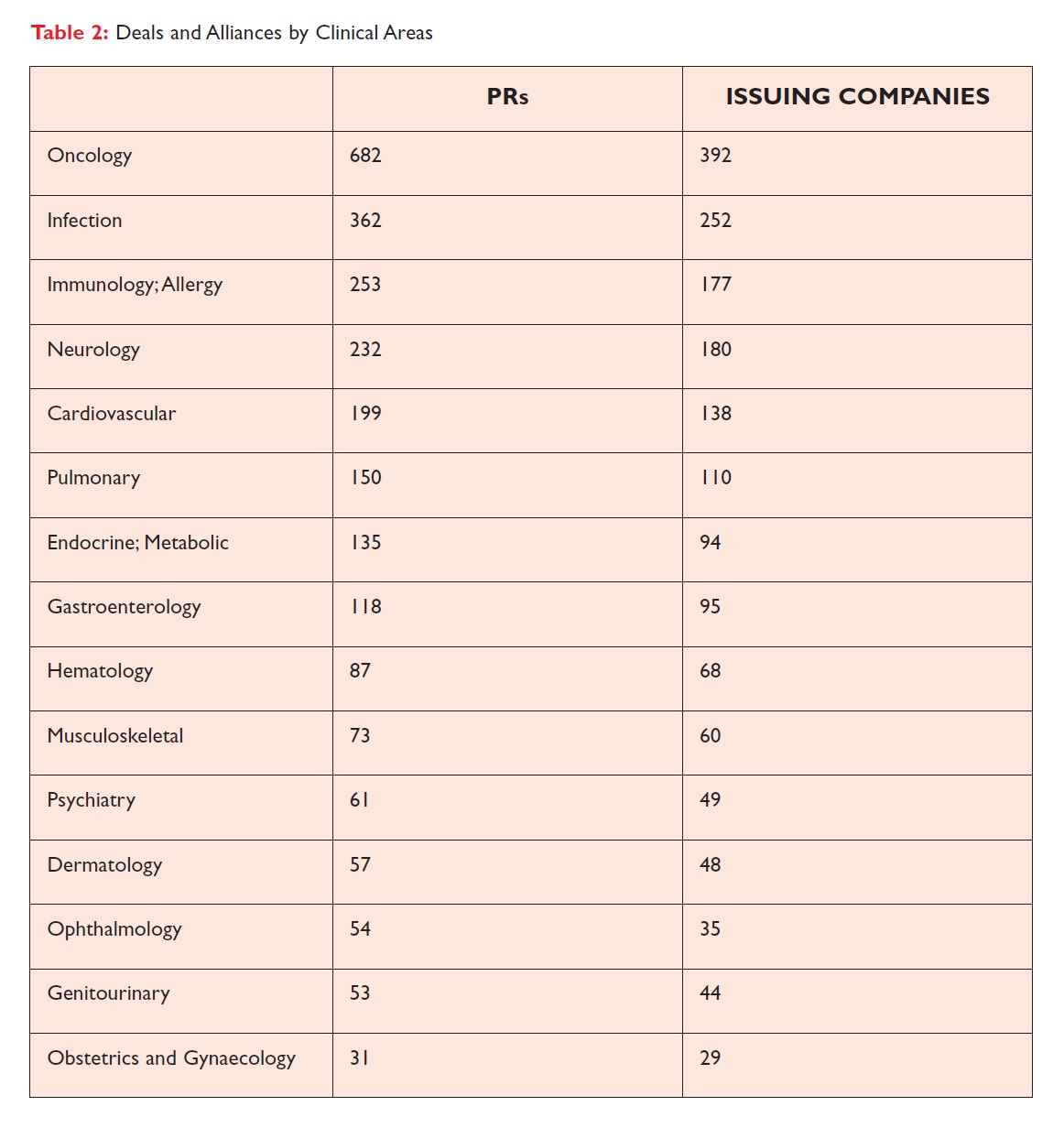 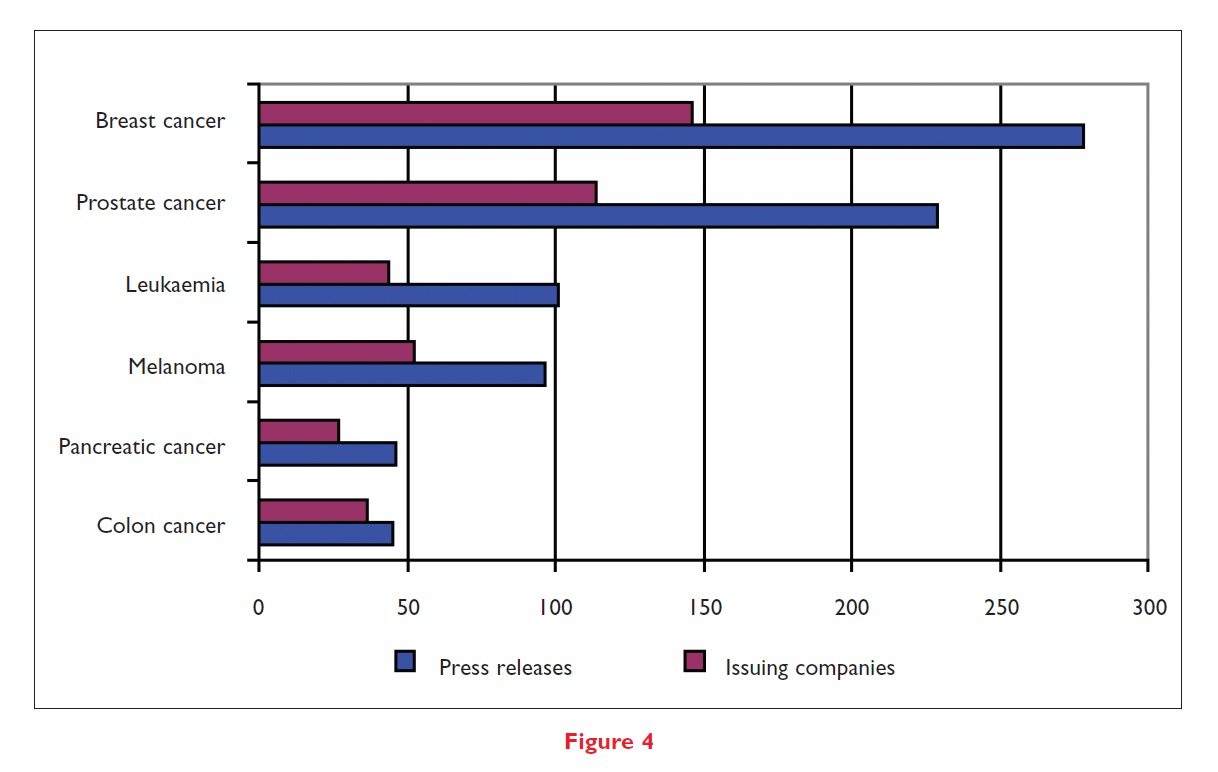 It is possible to see which subjects are most popular by looking through this universe of press releases (Table 3). 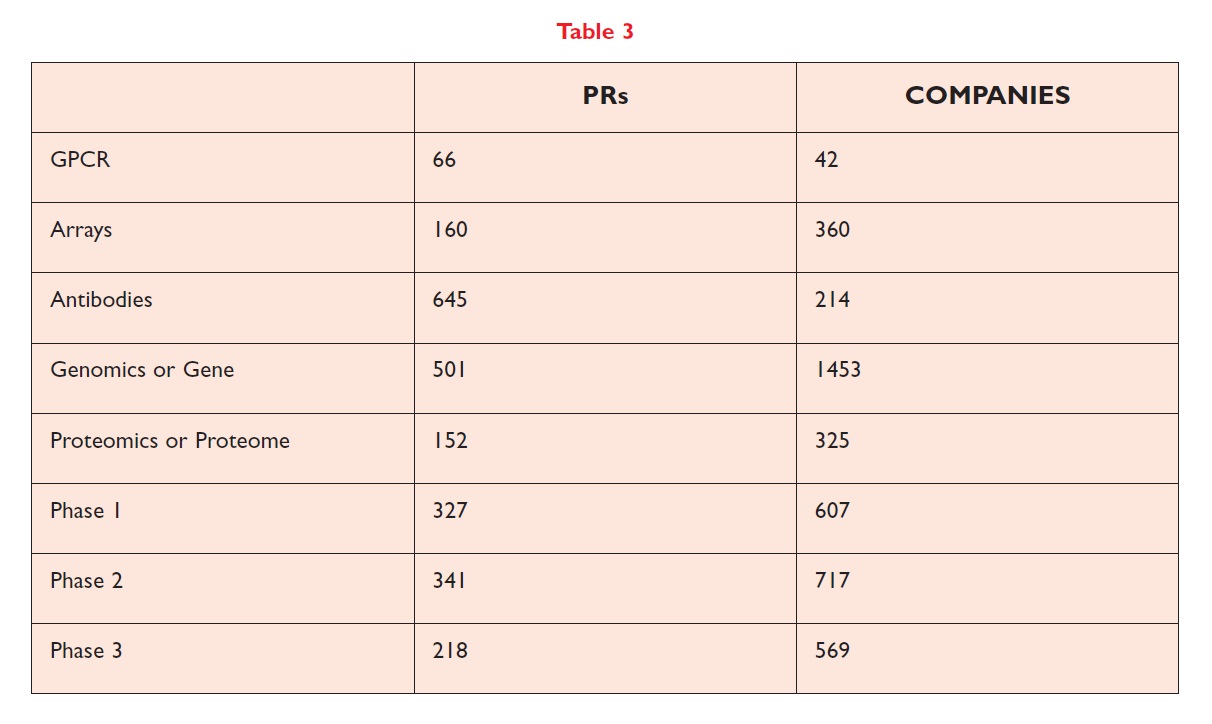 Whatever the motivation for issuing press releases, taken as a whole, they give useful information about the activities and trends of the industry, which may, in turn, provide a valuable context for strategic decisions in drug development. DDW

This article originally featured in the DDW Summer 2003 Issue

Dr Richard Franklin has spent the last 25 years in the Biomedical industry as a consultant, investment banker and entrepreneur. He is the Chairman of Life Medical Sciences, a US publicly traded medical device company; board member of Phairson Ltd and Tarix Pharmaceuticals, two development stage biopharmaceutical companies; founder and Chairman of DMS Data Systems and publisher of Biomedical NewsAnalyzer, Biomedical IndustryAnalyzer and Biomedical NewSearcher databases. He received an undergraduate degree in economics from Harvard, a PhD in Mathematics from Brandeis University, Professor of Mathematics at Brown University before going to Boston University Medical School.