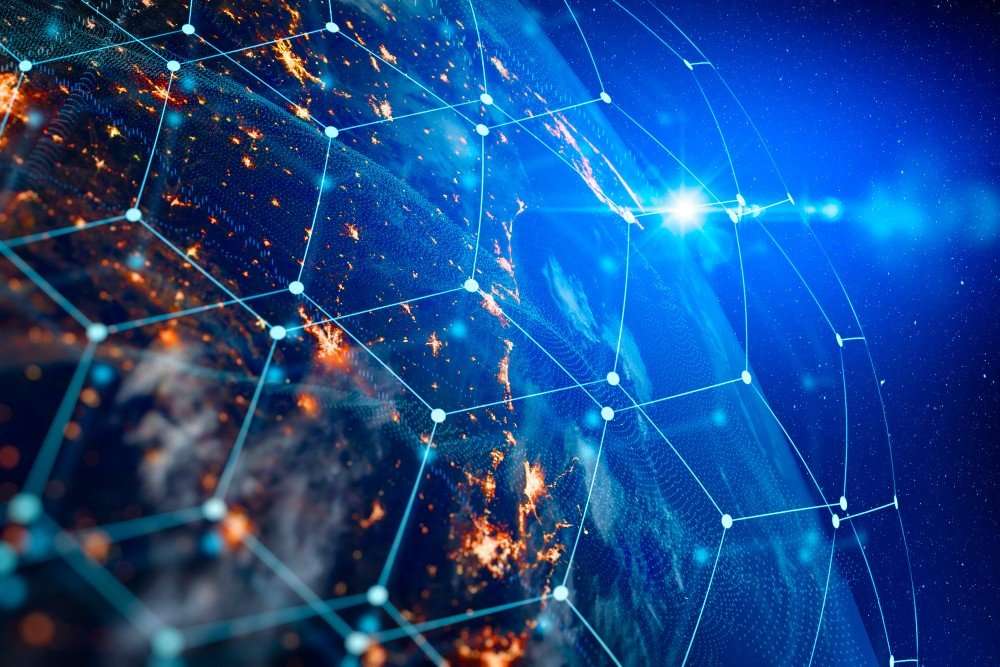 Lu Rahman takes look at some of the latest imaging innovation available and how it can benefit drug target identification and drug discovery research.

Imaging is an important element within the drug discovery and development process providing researchers with information that can help identify potential drug targets or see how drugs are working. Developments in this field are ongoing and technology is continuing to advance to increase efficiencies and accuracy.

Some exciting work has recently come from researchers at the Francis Crick Institute and the University of Western Australia who have developed a new imaging method to see where antibiotics have reached bacteria within tissues. It is thought that this could be used to develop more effective antibiotic treatments and reduce the risk of antibiotic resistance.

An issue when treating bacterial infections, is getting antibiotics to reach the infected cells. The Francis Crick Institute says that if researchers could select for or develop more effective antibiotics based on where they reach, it’s possible that treatment time could be reduced – this could lessen the risk of antibiotic resistance developing.

The researchers developed an imaging method enabling them to see where in infected tissues and in cells an antibiotic given to treat tuberculosis reaches the bacteria.

The method enabled the researchers to discover that the bedaquiline had not reached all infected cells in the lung tissue and also had not entered all infected areas within infected cells. They were also able to see that this antibiotic was collecting in macrophages and in polymorphonuclear cells, both types of immune cell. This was a surprise as these cells have different environments and it wasn’t thought that one antibiotic would be able to enter both.

According to Tony Fearns, author and Senior Laboratory Research Scientist in the Host-Pathogen Interactions in Tuberculosis Laboratory at the Crick, this  approach could be used to help develop new antibiotics or to re-assess current antibiotics to judge how effectively they reach their targets. “The more we learn about how drugs behave in the body, for example where they collect, the better we will be able to treat bacterial diseases like tuberculosis,” he said.

Advances in the imaging market and the benefits they create for the drug discovery and development sector, are considerable as technology suppliers continue to develop increasingly sophisticated solutions for researchers.

According to Dr. Charles William Amirmansour, Global Business Development Manager, BioTek Instruments, the last decade has seen some remarkable developments in the imaging market. “Abbe’s diffraction limit has been repeatedly side-stepped by structured illumination and super-resolution techniques, the latter allowing microscopy of single molecules. In addition, technologies have improved to allow imaging of the interiors of thick specimens, including complex cell models and tissues using multi-photon and light sheet microscopies. Imaging of living cells and tissues has also markedly increased over this period, requiring technology to ensure that specimens are non-perturbed during imaging – even if the experiments continue for days.”

He notes that image analysis algorithms are continually being refined to ensure that microscopy is not just a useful tool for structural analysis, but for quantifying cellular function too. “High content screening, developed over twenty years ago, enabled the use of quantitative microscopy in drug discovery  – a field where throughput demands brought the microplate format to the microscope. Nevertheless, these systems remain cost prohibitive to the average laboratory. More recently, the emergence of benchtop automated imagers with similar capability, yet costing a fraction of the price of a conventional HCS platform, have democratised quantitative microscopy,” he says.

Dr. Joanna Hawryluk is an Associate Product Manager for Research Imaging and Microscopy at Olympus. She explains that the imaging market—including Olympus—is constantly looking at ways to develop new technologies that will contribute to improving the entire imaging workflow from data acquisition to analysis. “On the data acquisition side, the current focus is on improving image quality and acquisition speed to increase throughput while maintaining the sample’s integrity. In other words, improving the signal-to-noise ratio, the measure of image quality based on signal intensity and background noise,” she says.

“For example, in traditional confocal technology, pinholes are used to obtain sharp, high-resolution images, but the inherent loss of light from the pinhole(s) makes it challenging to capture images with a high signal-to-noise ratio. It also exposes your sample to large amounts of out-of-focus light, increasing the likelihood of photobleaching. This makes it difficult to image thick samples such as spheroids (3D cultures), as they require a higher excitation light to produce a fluorescent signal strong enough to be detected.”

Olympus’ FLUOVIEW FV3000 confocal microscope with TruSpectral detection technology, uses a volume phase hologram (VPH). “VPH gratings allow light to pass through a grating to diffract it into its spectral components to allow for spectral unmixing, without compromising on sensitivity,” adds Hawryluk.

“Improved image quality leads to more robust and reliable data. But these data need to be processed quickly and intuitively,” she says. “Recently, machine learning has been applied to image processing for deep learning, also called neural networks, of patterns within images to speed up and extract complicated information.”

How imaging is furthering drug discovery and development

Imaging has advanced to create efficiencies and benefits to workflow in drug discovery and development. “A raft of technologies introduced in recent years has reduced drug candidate attrition, accelerated development workflow, and helped identify more effective therapies,” says Amirmansour. “A particular area of focus has been the adoption of more physiologically relevant cell models used during early selection, based on the assertion that those more closely resembling human physiology generate a truer indication of efficacy ahead of clinical trials. This has led to the development of 3D cell culture methods, often using human primary or differentiated stem cells, aggregated into tissue or organ-like structures associated with the disease indication.”

According to Amirmansour, assays associated with these 3D models tend to quantify specific phenotypes of the cell aggregate, which are often best analysed by quantitative automated microscopy. In fact, he adds, phenotypic screening associated with automated imaging has supplanted industrialised, target-based, small molecule screening to a large degree. “As automated imaging/microscopy and image analytics have evolved, cellular imaging has become the preferred method for other areas in the drug discovery process (both upstream and downstream of screening), including new target identification, compound profiling, toxicology, and the study of the mechanism of action of test molecules.”

Hawryluk adds that the use of imaging throughout the drug discovery workflow allows for efficient and quantitative measurements that complement various genetic and biochemical data and enhance mechanistic studies by providing location information that cannot be detected using non-imaging methods. “Specifically, when using imaging within the cell culture process, this helps ensure the quality control of your cultures while the 3D information enables a more detailed analysis. Doing the detailed work earlier in the drug discovery process can help reduce the risk of failure and, therefore, costs and time,” she explains.

“BioTek Instruments first launched a cost-effective automated microplate imager in 2013.  Based on a conventional microplate reader design, the Cytation 3 included options for both monochromator- and spectral filter-based wavelength selection (covering a broad array of modalities including UV/Vis absorbance, fluorescence intensity, luminescence, time-resolved fluorescence, and fluorescence polarisation), combined with an inverted automated digital microscope for quantitative imaging of cells,” says Amirmansour.  “Over successive years, we built out this product line to broaden the capabilities (extending multi-mode functionality to include AlphaScreen), adding further microscopy modes to the original fluorescence and brightfield. These include phase contrast, colour brightfield, and a proprietary high contrast brightfield that enables absolute cell counting. Image analysis capabilities have been expanded, broadening the range of possible imaging applications, such as the ability to functionally quantify sub-cellular structures. Hardware improvements and additional functionality have also been a focus in product development; in addition to the initial inverted geometry, Cytation models now offer upright microscopes – ideal for opaque samples used in applications such as ELISpot”, he says. New camera technology driven by the adoption of CMOS technology has also found its way into the Cytation product line. The company has also released the new Cytation C10, which integrates automated spinning disk confocal and widefield microscopy with conventional multi-mode microplate reading.

“A single experiment never exists in a vacuum, as it is part of a larger hypothesis. To publish a comprehensive story, one needs to show compelling screening data complemented by individual dose response studies to justify a choice of target. Livecell assays illustrate the phenotypic and morphological changes that occur and microscopy further allows one to visualise proposed mechanisms at work. Also, molecular validation of those mechanisms is key to validating the visual and biochemical data from early findings. And finally, the physiological relevance of the proposed interactions needs to be confirmed by histological evaluation of animal models or other samples,” says Amirmansour.

He adds that this combination of capabilities in a single instrument drives greater workflow efficiency and productivity than ever before. Researchers are now able to build a comprehensive story from drug screening to histological confirmation through a combinatorial approach on a single instrument. Amirmansour  explains that the multidisciplinary capability offered by the Cytation C10 could be best thought of as a balanced equation:

“Using the approach described above, future clinical responses can now be better predicted early in the drug discovery process, generating comprehensive phenotypic signatures that correlate with target-based and mechanism of action studies, which in turn reduce late-stage attrition of drug therapeutic candidates,” he says.

Olympus offers a range of imaging solutions for the drug discovery market.   These include the CM20 remote cell culture monitor which integrates image analysis into the cell culture monitoring process. The system provides quantitative data about the health of their cultures, including confluency, to help users verify the quality of the cells used in their assays.

According to Hawryluk Tte scanR high-content screening station is a modular and flexible microscope with automation for improved imaging output. It has been designed to easily adapt to various imaging needs.

“The use of Olympus’ TruAI technology offer significant benefits to many live-cell analysis workflows by providing robust quantitative analysis of many images under challenging light conditions. Aside from the improved accuracy, deep-learning-based TruAI can access new information encoded in both transmitted-light and low-light fluorescence image while reducing phototoxic light exposure to your samples,” Hawryluk adds.

The company’s NoviSight 3D cell analysis software provides statistical data on 3D cell cultures used in drug discovery, like spheroids and organoids. Hawryluk says: “The use of 3D cultures in drug discovery has grown in the past decades as they better simulate in vivo physiology. Today, 3D cell cultures are emerging not only as a new tool in early drug discovery but also as potential therapeutics to treat disease. New tools like NoviSight software are needed for detection, high-content analysis, and statistics of these specific cell types in microplate format.”

Other innovation includes the SLIDEVIEW VS200, an automated digital slide scanner that combines five observation methods in one imaging system to capture high-resolution slide images for quantitative analysis and the TruSpectral technology within the Olympus FV3000 laser scanning confocal microscope which has been created to enable up to three-fold more light transmission and accurate spectral unmixing of overlapping fluorophores. The result, says Hawryluk,  is excellent multi-colour fluorescence microscopy images of live and fixed samples with lower laser power for reduced phototoxicity, important elements for a range of cell-based assay validation experiments. 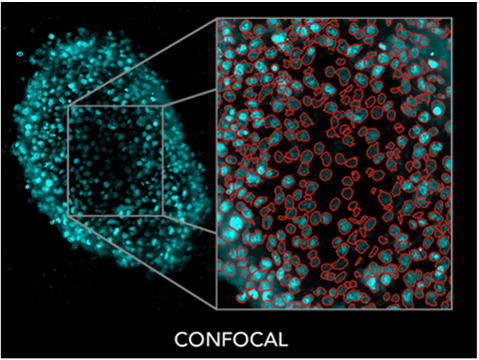 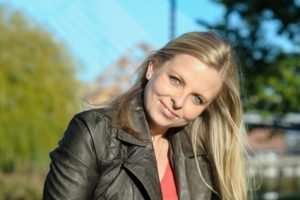 Dr. Joanna Hawryluk is an Associate Product Manager for Research Imaging and Microscopy at Olympus. She received her doctorate degree from the University of Connecticut in Storrs in the department of Physiology and Neurobiology. Dr. Hawryluk joined Olympus in 2017 and is based in Waltham, MA. 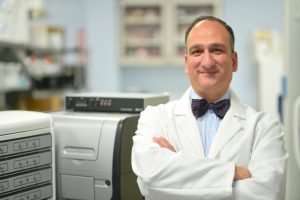