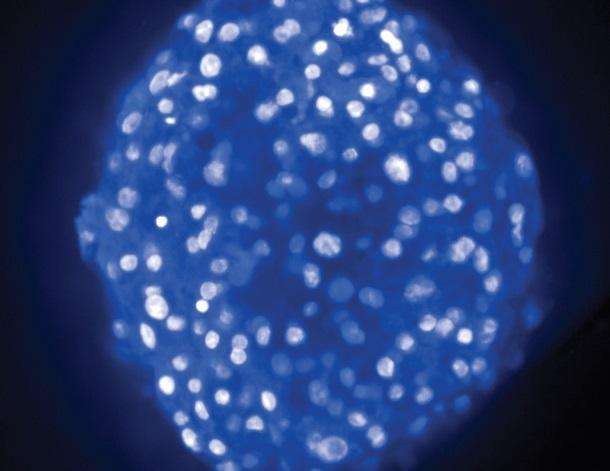 Early drug discovery used to be conducted mainly in a target-agnostic fashion, focusing on qualitative readouts from a living system – cells, tissue, or organisms – and asking the question, did this entity affect the phenotype?

Target Based or Phenotypic Screening?

With the rise of molecular biology in the early 1980s and an ever more powerful genomics toolkit from the 1990s, there was a marked shift away from phenotype-driven approaches towards screening techniques that looked to discover molecules affecting a defined disease target in an efficacious way. Initial assays were often performed using isolated, purified proteins rather than cells with the assumption that a target-based approach was the most streamlined path to finding the next marketable drug.

A study by Swinney and Anthony (2011) looking at FDA-approved new molecular entities (NMEs) rekindled the debate by finding that, during an era where focus had already shifted towards target based screening, “the majority of small molecule first-in-class NMEs that were discovered between 1999 and 2008 were first discovered using phenotypic assays.”

Eder et. al.’s 2014 work challenged the conclusions reached by Swinney and Anthony. These authors expanded the scope of the meta-analysis to include 1999 to 2013 and differed somewhat in both definitions and the quantitative results, finding that fewer NMEs came from “what we define here as phenotypic screening: testing a large number of compounds in a targetagnostic assay that monitors phenotypic changes.”

But the message can be taken away from both studies that there is much to be learned from phenotypic screens – as both an alternative as well as a complement to targeted screening – especially early on in the drug discovery process.

To be sure there are challenges and obstacles to overcome – not least finding a relevant biological disease model, being able to extract relevant data from that model, and identifying the ultimate target of the hits found by the phenotypic screens – before phenotypic approaches such as high content screening (HCS) become established as primary tools of drug discovery. Yet regardless of where you are on the debate of true phenotypic, mechanism-of-action (MOA)-agnostic versus target-centric approaches to drug discovery, leveraging the power of systems-based assays through a detailed multiparametric observation and description of phenotypes can lead to a more productive discovery pipeline.

Here, we highlight some of the merits and challenges of looking at phenotypes rather than isolated targets in early stage drug discovery, and outline how such approaches can help with both target-based drug discovery (TDD) and phenotypic drug discovery (PDD) strategies. 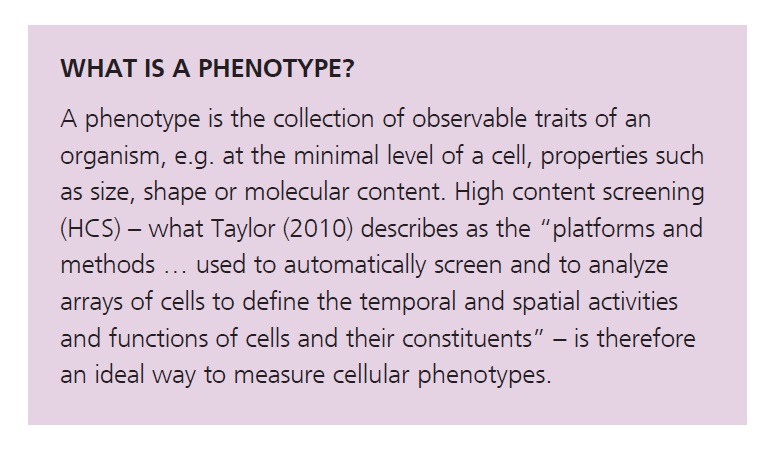 Why Do Phenotypic Screening?

Understand the effect of a compound on a system

Cellular or systems-based assays look at phenotype changes of relevant disease models. They may have just one or a few primary readouts – nuclear to cytoplasmic intensity ratio of a labeled receptor, for example – yet a host of other information such as distribution patterns of the receptor, how spread out the cells are, and other aspects of cellular morphology, can be simultaneously collected and quantified. Those multi-parametric data – generated by multiplexed staining and increasingly sophisticated image analysis software describing cell morphology and intensity distribution in great detail – can be incorporated into a nuanced assessment of, for example, the overall effect of a compound on a system.

These assays are useful for TDD as you can directly show that the compounds have an effect on a representative system, not just on an isolated target molecule. In the simplified example above, the screen may be for small molecules that cause a known transcription factor to translocate to the nucleus. Yet at the same time other parameters can act as indicators of cellular stress and potential toxicity. This helps to reduce the number of false positives.

Maximize the data from your screens

In the past – and even to a large extent today – many HCS screens have utilized only a small part of the information available in the screen, disregarding features or the distribution of features, that could lead to nuanced distinctions between, for example, healthy and diseased states or even provide insight into potential MOA (Singh et. al., 2014). This was in part due to a lack of software tools able to properly incorporate the data and to a lack of adequate computing power.

Significant advances mean that phenotypic fingerprints can now be created from even hundreds of features. Increasingly, these features are being analyzed at the single cell level. Not every cell in the well or image will respond in the same way in the assay and taking the mean of cell responses in an image can mask significant phenotypic responses. By looking at individual cell data and for changes in the distribution of a response, it is possible to see enrichment of phenotypic features and statistically significant responses of cells that would otherwise be masked by assay variability.

Many scientists only utilize readily visible “simple” parameters such as marker intensity rather than more complex combinations, such as the quotient of texture and circularity. This is not only due to the lack of software tools and adequate computing power referenced above, but because scientists feel such complex descriptors are more difficult to align with biological meaning making it more difficult to communicate their findings.

Yet phenotypes can be better discriminated by measuring larger collections of features; these can then be mathematically reduced and combined into collections of parameters (classifiers) by software using machine learning algorithms, allowing for sensitive phenotypic clustering. This enables the scientists to follow subtle phenotypic changes in response to different doses or MOAs and helps to reduce the potential human bias, or confirmation bias, that can result from selecting just one or very few parameters.

HCS assays are at the heart of PDD – a strategy which implies that the researcher has very little foreknowledge of (or at least little bias towards) the MOA of potential drug candidates and relies on physiologically relevant and predictive model systems of the disease in question. Where and how the drug might work is initially secondary to its positive phenotypic effect on the system in which it is being tested. PDD leaves open the possibility of new, and unexpected discoveries coming from the screen.

How to Get the Most Out of Your Phenotypic Assays 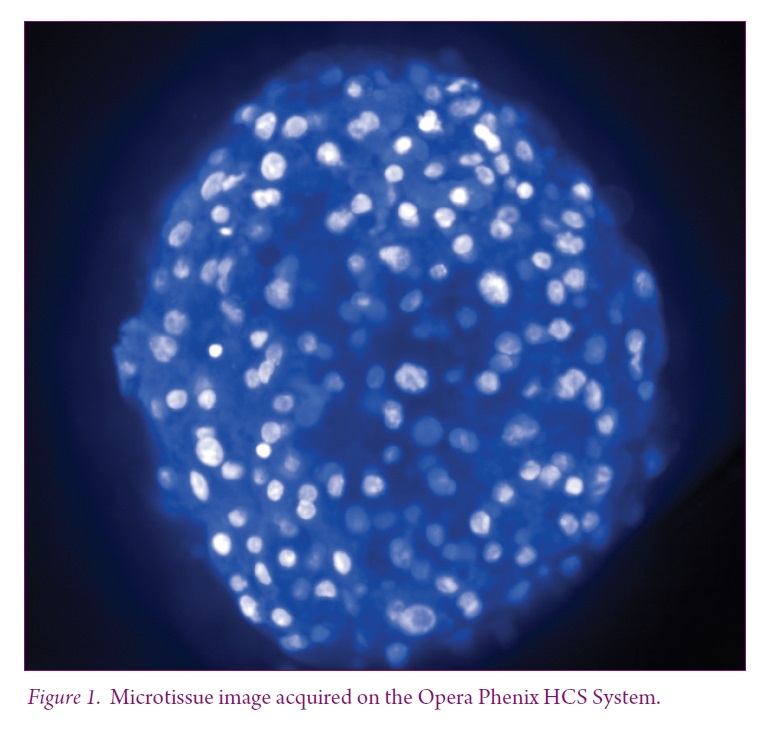 Confocal high end imaging systems are ideal tools for today’s complex cellular models and phenotypic assays. They enable fast and gentle live cell imaging, and by acquiring up to four channels simultaneously, provide sufficient throughput for effective screening campaigns. The combination of spinning disk confocality and water immersion lenses is also a prerequisite for quality data from 3D culture models. The Opera Phenix™ High Content Screening System, in particular, provides the benefit of simultaneous acquisition of up to four channels, without paying the penalty of reduced sensitivity due to spectral crosstalk. This generates the ideal input of high quality image data necessary for powerful image analysis.

Another variable to consider is your choice of microplates and coating. They need to be suited to your cell sample and application to give high quality images. For example, CellCarrier™ Ultra plates combine optimal imaging properties with high biological compatibility.

The additional detail gained by using HCS brings with it value in terms of being able to discriminate more subtle phenotypes from the ten or 100 or more parameters queried. This much data can lead to enormous challenges. The Opera Phenix HCS system, for example, can easily generate greater than 0.5 terabyte of image data per day and more than 5 TB when looking at kinetic phenomena or 3D structures. Extracting hundreds of features per cell can add similar amounts of numerical data. Storing and processing such quantities of data requires serious consideration about data flow, network bandwidth, storage and archiving policies, as well as sufficient computing muscle.

Due to the vast amounts of data generated by PDD, image analysis tools must provide easy to use yet powerful ways to extract a multitude of meaningful descriptors of cellular traits (Letzsch 2010). Solutions such as the Columbus Image Data Storage and Analysis System enable biologists to extract not only classical measures such as signal intensities or morphology parameters but also advanced, statistically robust measures such as SER Texture or STAR morphology (Sero, 2012), to describe even subtle differences in phenotypes without the help of an image analysis expert. The resulting phenotypic fingerprints are rich sources for decision making. 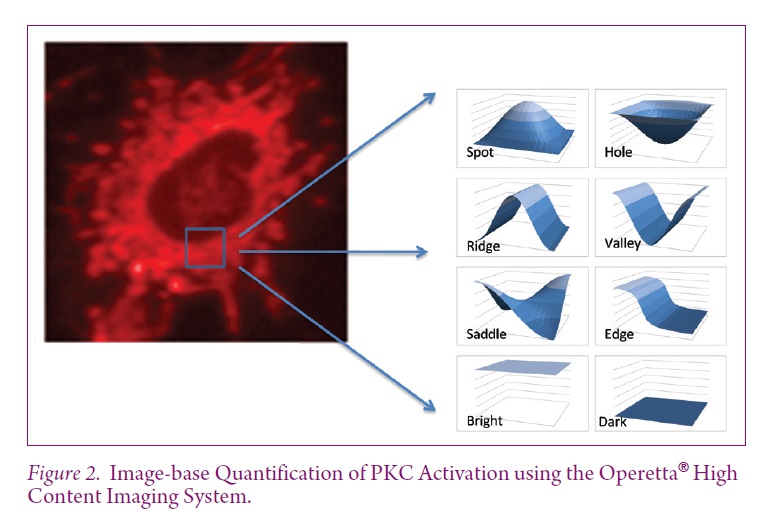 Data normalization, feature reduction and hit selection can be daunting tasks, often requiring expert help from biostatisticians. A framework that guides the user step-by-step through this process can empower the biologist to run these analyses on their own. High Content Profiler leverages the interactive and visual approach to data analytics and proven statistical methods of TIBCO Spotfire for multiparametric hit selection. Furthermore, clustering phenotypes by similarity can point towards possible MOA or target classes.

When new candidate compounds give rise to phenotypes that cluster with those caused by compounds acting on a known target or MOA, the new compound might act on a similar target. Such a hypothesis can be tested, for example with siRNA approaches. One option is to compare the effect of the drug with the phenotypes created by siRNA knockdowns of suspected target genes. Another option is to look for a shift of the EC50 value of the compound in question when the target gene expression is knocked down.

Today’s drug discovery strategies require candidate compounds to fail early and cheaply in the discovery stage, rather than late and expensively in the clinical phase. Testing compounds from the beginning in physiologically relevant model systems and leveraging the rich information available in image-based screens are ways to focus on those compounds that give rise to the right phenotypic changes without undesirable effects on the system. High Content Screening with highly detailed multiparametric assays in conjunction with modern machine-learning tools provide a promising way to achieve this goal.

This whitepaper was sponsored by PerkinElmer, you can download the original PDF here