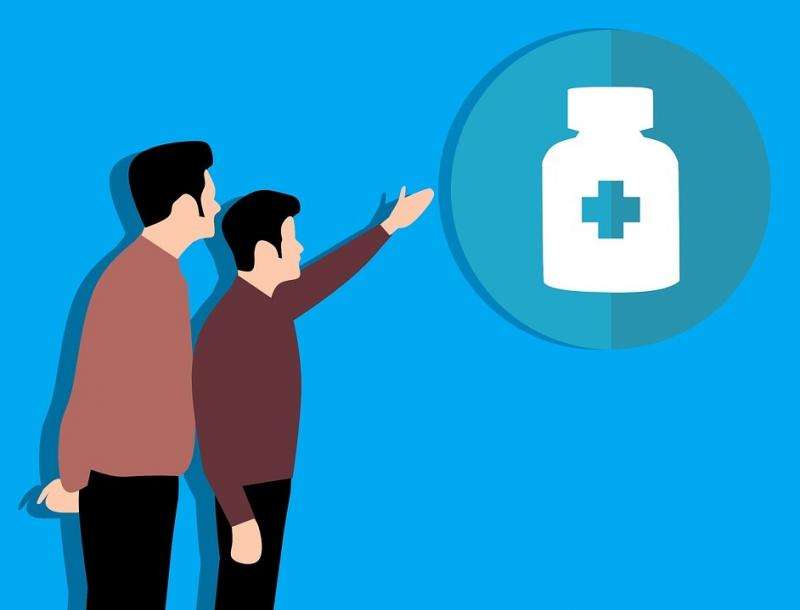 In light of the high failure rate of compounds when they are subjected to clinical testing, we are seeing a renaissance in phenotypic screening in drug discovery. However, most phenotypic screening is based on the use of cellular assays and here we debate the advantages and disadvantages of single-cell versus 3D multi-cell analyses.

Despite the historical success of phenotypic screening techniques, target-based screening (often directly measuring the biochemical affinity between chemical compound and the biological target) has predominated compound screening campaigns. This is due to the efficiency of highly-automated and ultra-high throughput biochemical assay systems. By contrast, phenotypic approaches are comparatively inefficient given the high costs per sample and the low throughput assays frequently employed. Consequently, the approach is usually incompatible with the screening of large compound libraries. This is perhaps ironic, given that unbiased screening (eg phenotypic screening) should arguably be conducted against the broadest compound chemical library possible, with the goal of gaining the broadest range of lead chemical structures.

A common feature of both target-based and phenotypic-based screening assays is the extensive use of human primary cells, often derived from the patient with the disease under investigation. Such cells, which can provide robust understanding of disease pathologies, are optimal for drug discovery, as they express the targets, disease-causing mutations and signal pathways involved in the disease pathology. The widespread availability of such cells has contributed to a renaissance in phenotypic screening, facilitated by the rapid development of robust, high throughput, high content cellular imaging systems. This is particularly relevant in assays directed at difficult drug targets as well as in diseases for which the molecular mechanisms are unknown. Furthermore, rapid technological advances in signal detection and microfluidic handling systems now enable phenotypic assays to be conducted using human cells in two mutually exclusive formats. The first is single-cell analysis, in which several analytical studies can be directed at a single-cell (genomic, proteomic, etc). The second is in multicellular populations, where aggregate responses are measured. In this format, the cells are cultured in three-dimensional assemblies (spheroid, organoids, tissues, etc) in a manner that more accurately resembles, or translates to, human tissues in vivo (1).

The question: phenotypic or target-based screening? Single-cell or multicell analysis?

Consequently, one can now pose the question of which assay approach, single-cells or multicellular complexes grown in three-dimensional structures, is optimal when conducting a phenotypic (ie unbiased) screening campaign. It is increasingly evident that both target-based and phenotypic screening share the same fundamental problem: the assay format’s biology does not fully recapitulate the physiological or pathophysiological microenvironment of the cells in vivo, and thus the preclinical data may not adequately model the human clinical outcomes. Conversely, multicellular analysis, by definition, which deals with population responses, may obscure target sensitivity to compound pharmacology as well as the contribution of rare cells to the signal from the heterogeneous population. This question of whether phenotypic screening is best conducted by single or multicellular analysis is highly relevant when the disease target is incompletely defined, difficult to screen at, or simply ‘undruggable’ from medicinal, chemistry or biologic perspectives.

The goal of this brief review is, therefore, to address the use of single-cell as opposed to threedimensional cell culture in the context of phenotypic screening. It is suggested that the use of both approaches can facilitate disease understanding to identify novel, validated drug targets. They can also identify novel biomarkers that drive patient stratification and help predict therapeutic responsivity. While the use of both approaches is optimal, it is surprising that few, if any, studies have been undertaken that compare data from single-cell to multicellular screens using phenotypic readouts.

The basic concept of single-cell screening is to enable a better understanding of assay responses from an individual cell, as opposed to measurement of population averages and the resulting heterogeneity of measurements from genomics, transcriptomic, epigenomic, proteomic and pharmacologic analysis. Screening for compound action at the single-cell level also reveals previously obscured individual cell-to-cell variations, frequently masked when whole population responses are taken.

The increasing use of single-cell analysis in screening demonstrates that many cell populations exhibit a level of heterogeneity, even among those cells of the same phenotype, such as cells growing within a single tumour. The ability to define this heterogeneity is important in understanding the complexities of polygenic diseases and their optimal treatment. Subtle, but significant, differences among patient cells are illustrated by the realisation that responses of individual cells to oncologic drugs cause the emergence of drug-resistant responses, even though only a small percentage (~0.3%) of cells possess the ability for tumour recurrence (2).

Historically, screening for novel compounds using single-cell responses has been limited both by economics and technical shortcomings in assay throughput and sensitivity. This is principally due to the high equipment costs and throughput required to characterise large cell numbers in very small volumes. Nonetheless, recent advances in automated liquid handling, coupled with precision microfluidics, are beginning to mitigate these shortcomings, as they provide increased sensitivity, economy of scale and precise automation. Indeed, microfluidic engineering is now foundational in manipulating single-cells for assays and analysis (5). Part of the reason for this is that the handling of extremely small volumes and low concentrations of target molecules that is required when working with individual cells necessitates precise manipulation, high precision of assay conditions and highly-sensitive signal detection. Specifically, microfluidic chips are being combined with several analytical techniques to assess cell morphology and a range of cell behaviours, including growth dynamics, migration, proliferation, differentiation and apoptosis (6).

While single-cell analysis can provide an unprecedented view of pharmacology and physiology from a single rare cell – unmasked by heterogeneous population responses – each cell in the assay must be isolated from the microenvironment. A significant disadvantage of this approach, therefore, is that single- cell pharmacology in vitro may differ from that present in a larger population, particularly in an architecture that is not three-dimensional (3D), where cell:cell contact is critical. In contrast, 3D cell assembles, including spheroids and organoids, provide a much more physiologically-relevant context for compound screening. Indeed, 3D cell culture has been rapidly adopted in compound identification and optimisation, as they better model in vivo human physiology and pathophysiology. Many techniques are now in routine use and recent reviews emphasise the use of 3D cultures as preclinical models as a common practice in both drug discovery and fundamental disease research (7).

Multicellular organoids are self-organised, three-dimensional tissue cultures often derived from adult stem cells or induced pluripotent stem cells (iPSCs). They can replicate a degree of organ complexity to a greater degree than seen with single- cells, 2D culture and simple 3D cultures such as spheroids. Furthermore, as organoids are cultured using cells from a specific individual, they can be used to predict individual patient responsivity to a specific drug or a specific dose. Related to this is the advantage that cancers and many other diseases can be modelled in vivo using biopsy samples and be subsequently used for compound screening (Table 1). 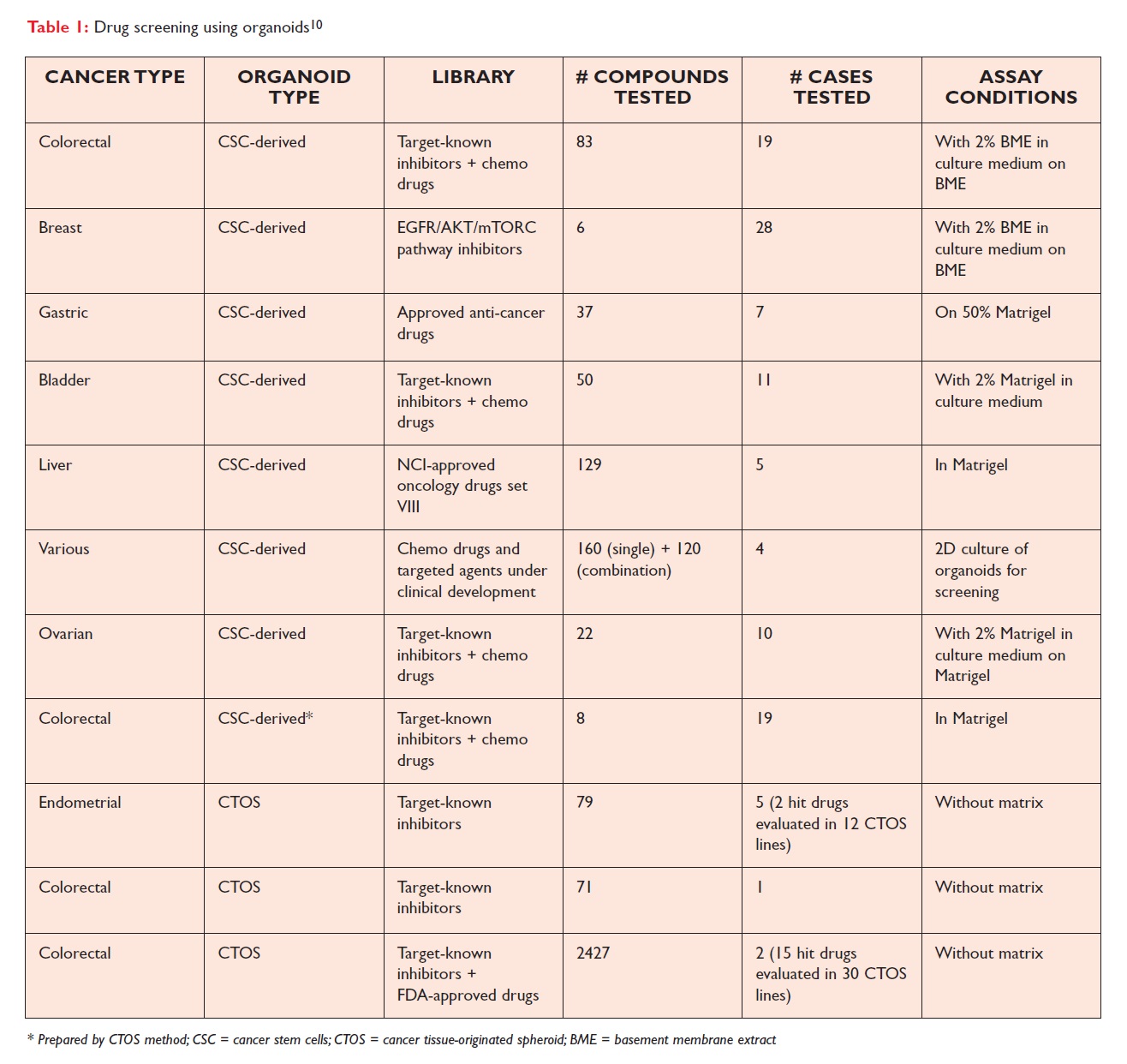 As an example, a recent study presents data for more than 80 tested compounds, registered or in clinical evaluation, that are screened against a colon cancer organoid ‘biobank’ and demonstrate the utility of a high throughput approach (9).

The high failure rate of preclinical compounds in clinical study remains a key problem in modern drug discovery. Innovative technologies will only be adopted if they can improve efficiency and, ultimately, the probability of clinical translation. In drug discovery, the renaissance in phenotypic screening, particularly against the non-classical, previously ‘undruggable’ drug targets and/or signalling pathways, provides novel opportunities for a new generation of medicines.

However, most phenotypic-based screening, and, to a large extent, target-based screening, is based on the use of cellular assays, increasingly with primary stem cells from the individual patient. Should the cell-based assay, therefore, be predicated on single-cell techniques, or multicellular techniques? Single-cell analysis is critical to understanding cell:cell variability and the impact of measuring responses based on population-average measurements. Interrogating individual cells, as opposed to measuring the average population response, enables meaningful understanding of the interactions and contributions from low numbers of cell subpopulations in the organoid or tissue. By contrast, the growing adoption of 3D cultures is also increasing clinical predictability of compound pharmacology (and ADME/toxicology) of novel compounds.

Evidently, both single-cell and multicellular analysis have their advantages and disadvantages in drug development and in compound screening, especially when used to phenotypically assess compound pharmacology and where there is little a priori knowledge of the molecular target(s). Currently, techniques for both single-cell and multicell assay screening are rapidly advancing, as are imaging and multifluidic approaches that are already impacting phenotypic assays. There are few, if any, studies directly comparing the two approaches, a deficit in the field that should be addressed given the growing establishment of cell and tissue biobanks from patient cell populations, and their subsequent use in compound screening and profiling. DDW

The article originally featured in the DDW Fall 2019 issue

Dr Richard M. Eglen is an independent Board member, advisor and consultant, having recently retired from Corning Life Sciences, where he was Vice-President and General Manager. Eglen has more than 40 years’ senior executive management experience in the life sciences industry, leading organisations in both drug discovery and technology development. He has authored more than 325 publications, book chapters and patents, and serves on several industry, academic advisory and journal editorial boards.