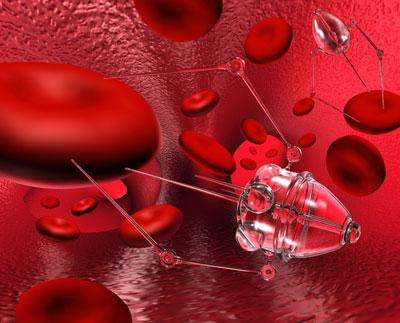 Nanotechnology has touched many scientific disciplines, from its roots in chemistry and physics to applications in biology and engineering (1). A nanotechnology industry has developed, offering at present a new iteration of established technologies such as composite materials and semiconductor chips, and also promising future medical technologies such as targeted therapies (2).

As nanoscience becomes nanotechnology and applications move from the physical engineering fields to bioengineering, one of the first biomedical fields to be affected should be drug discovery, and in particular the early, in vitro, biochemical stages. This review will cover key nanotechnologies that should update and expand the drug discovery toolbox.

Drug discovery begins with high-throughput screening (HTS), in which thousands of small molecule drug candidates are screened against a protein target. Nanotechnologies are by definition high sensitivity, multiplexed, label free and small volume – the very characteristics that enable a system to be ‘highthroughput’. The synergies between current nanotechnologies and HTS, as well as other medical technologies, will be explored herein.

Before speaking of specific technologies, it is necessary to define nanotechnology. For the purposes of this review, nanotechnology is not the science of anything in the realm of 1-100nm; this would include DNA and protein technologies, clearly the domain of traditional biochemistry. The nanotechnology era was heralded with two key discoveries: of a microscope (the atomic force microscope) (3) and a molecule (the buckyball) (4) (Figure 1). 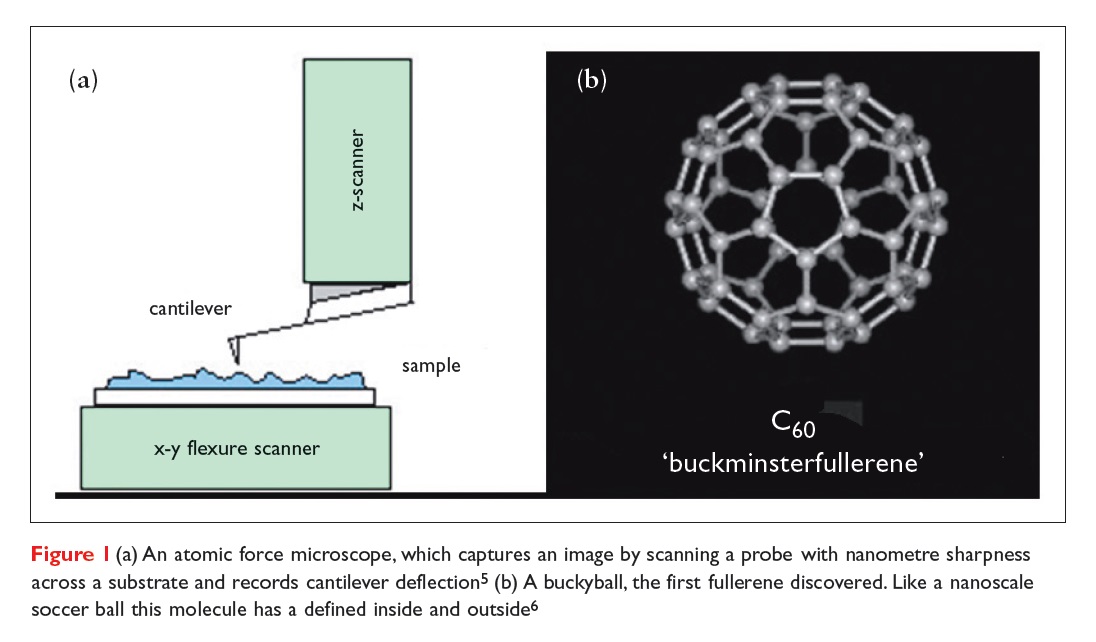 Our definition of nanotechnology will follow in this tradition. The nanometre size is taken as a starting point, and our more restrictive definition of nanotechnology is offered as a technology that does any one of the following: manipulates nanometre-sized structures (such as molecules) one at a time, utilises tools (such as microscopes) that have nanometre-sized features, or relies on physical or chemical properties that are only evident at the nanoscale (as opposed to bulk properties).

If the buckyball was the molecule that changed thinking in chemistry to include nanostructures, its cylindrical carbon counterpart, the buckytube, gives a glimpse of the phenomenal properties offered by nanostructures. This simple cylinder of carbon is approximately 1nm wide, and as a material is 100 times the strength of steel and only onefifth the weight. Nanotubes can either be semiconductors or conductors depending on their helicity.

As semiconductors, carbon nanotubes or inorganic nanowires can act as field effect transistors, with changes in conductivity upon binding by a protein or small molecule, and thus they can be used to detect proteins at pg/mL concentrations (7). Scientists have assembled arrays of nanowire detectors, each with a particular molecular functionality, and are able to detect DNA at 10-18M (Figure 2) (8).

These nanowire detector arrays have been interfaced with microfluidics, allowing delivery of minuscule amounts of fluids to the tiny detectors. It is not difficult to imagine, from these proofs of principle, a multiplexed, label-free assay of small molecule or protein binding.

Arrays of proteins or small molecules offer the most reductionist approach to screening some targets; others (such as ion channels) require proteins in membranes or entire cells immobilised on to surfaces. Although not strictly nanotechnology according to our definition, some of the methods of surface patterning enabling such assays have only recently been developed and made accessible (in terms of cost and usability) to biologists.

The ability to customise a surface’s chemistry has proven powerful for making surfaces biologically active – capturing small molecules or proteins – and for tailoring inert surfaces – resisting solvents such as DMSO, or modulating noise caused by nonspecific protein adsorption. Biochemically functionalising the tip of an optical biosensor gives a label-free detection system for protein-protein binding events as marketed by the company FortéBio.

By combining chemical modification of surfaces with patterning technologies, proteins or cells can be arranged in any arbitrary configuration, to the resolution of single microns, roughly the scale of cellular projections such as lamelipodia. First, motility assays were demonstrated, allowing one to monitor cell migration from pre-defined shapes, in real-time, in the presence of any desired media.

The latest generations of these assays allow more fundamental biological studies such as polarised cell motility (Figure 3) or paracrine interactions among multiple cell types. Companies such as SurfaceLogix, Inc have developed drug screening platforms based on such assays for the purpose of drug discovery.

Some receptors, such as ion channels, need to be assayed in native cells or at the very least in membranes. There are currently a few brands of automated patch clamp machines in use at major pharmaceutical companies. At the research frontier, scientists have microfabricated pores in silicon chips and demonstrated patch clamp experiments.

Coupling silicon chip technology with microfluidics, single cells can be directed to micropores, and gigaohm seals, on par with traditional patchclamping, can be achieved (10). Performing electrophysiology experiments on silicon is advantageous because microfabrication is easily scalable and can be interfaced with electronics, scanned probe and optical microscopy and microfluidics.

The nanoprobe microscope – first the scanning tunnelling microscope and then the atomic force microscope – brought the dawn of nanotechnology. For the first time scientists could image, manipulate and fabricate matter on the scale of single nanometres. Biomedical applications for these microscopes are beginning to reach fruition, with cantilever detectors and nanolithography the most promising uses for HTS.

Using the precision in force measurement afforded by the deflection of small cantilevers, protein binding events have been detected at clinically relevant concentration levels. One can envision multiplexed arrays of these cantilevers to detect simultaneous binding events to a number of different proteins (Figure 4) (11). 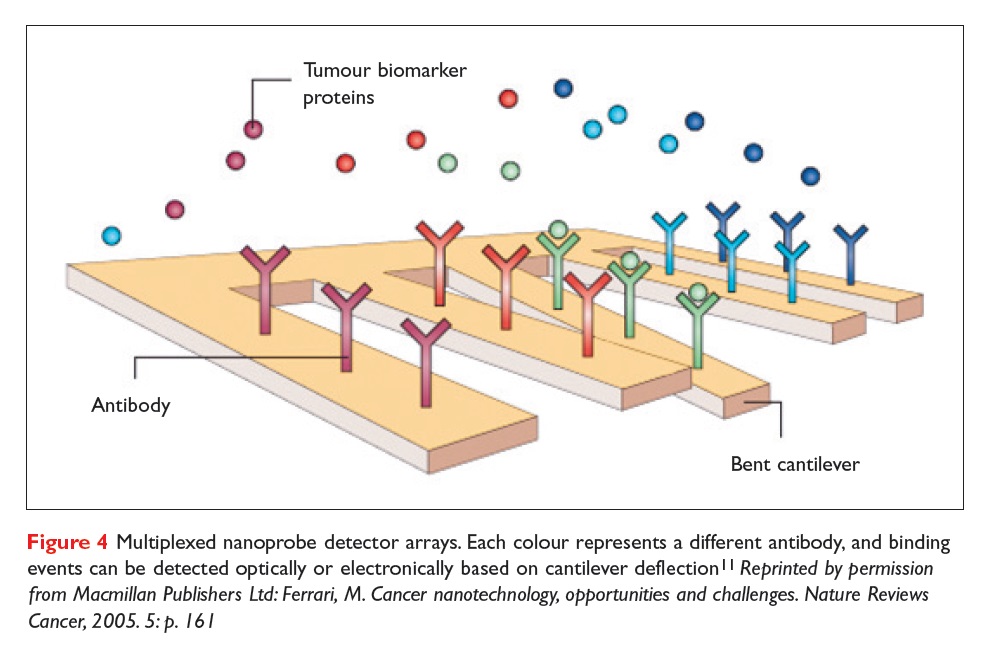 However, the positioning of cantilevers requires a high level of precision that may be difficult to achieve in conventional biology laboratories.

Just as nanoprobes run across surfaces to detect changes in topology, they can first be ‘dipped’ in solutions of proteins or small molecules to ‘ink’ surfaces with nanometre precision. This is the technological basis of a couple of companies – NanoInk, Inc and BioForce Nanosciences, Inc. Applications to HTS include the generation of arrays of target molecules detectable with or without labels.

While on the subject of nanoscale patterning, another simple, widely accessible technology should be mentioned – soft lithography (12). In essence, soft lithography uses polymers to microor nano-pattern surfaces. A silicone rubber ‘stamp’, first fabricated using conventional photolithography techniques, may be ‘inked’ with a desired molecule (often an alkanethiol) and subsequently ‘stamped’ on to a surface. The advantages of soft lithography are that this inking and stamping process can be repeated many times and does not require clean room conditions.

No discussion of nanotechnology applications for biochemistry would be complete without mention of quantum dots. These soluble nanoparticles are used in bulk like normal fluorescent labels, but they are unlike conventional fluorophores in almost every other respect. They consist of a 2-6nm sized semiconducting nanoparticle core that fluoresces at a wavelength governed precisely by particle size.

Quantum dots can be targeted to specific locales, either in whole organisms or individual cells, intracellular or extracellular, based on an exterior functionality (for example, an antibody). They emit within a very narrow range of wavelengths, but can be excited across a wide spectrum, allowing the possibility of multiplexing (Figure 5). 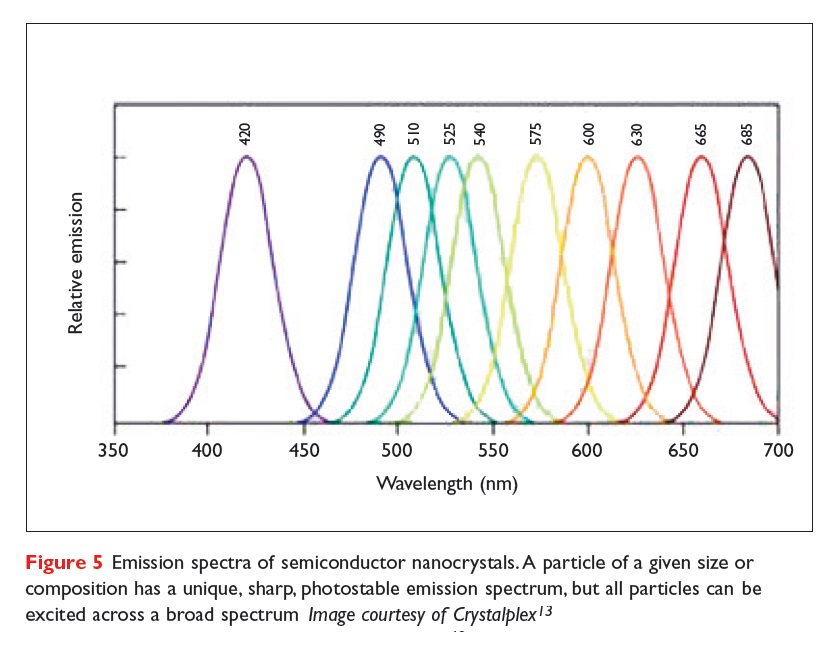 Quantum dots, once modified with biocompatible coatings and biospecific functionalities, have been used in in vitro and in vivo applications; they are perhaps the most established nanotech product for use in HTS. The company Quantum Dot, Inc, a pioneer of the technology, was purchased by Invitrogen, which continues to market QDot products.

Another company, Crystalplex, is marketing fluorescent nanocrystals for multiplexing. Crystalplex’s technology, like that of Quantum Dot, affords a range of photostable, sharp emission spectra, but does so by varying particle composition instead of particle size.

In the early 1990s, microfluidic technologies, facilitated by developments in soft lithography and other microfabrication techniques, began to hit the market. We can look back over a decade later and draw parallels for the likely successes or failures of nanotechnologies.

First, a caveat – nanotechnologies are much broader than microfluidics. Still, at the time of introduction, microfluidics promised for HTS applications such as use of very small volumes of expensive reagents (for example, drug candidates or protein targets), greater sensitivity in detection, and multiplexing capabilities (to perform multiple assays on the same chip).

Notably, these are many of the same potential advantages of nanotechnologies. Caliper Life Sciences and Fluidigm are two companies that have withstood the test of time in the industry, with Caliper marketing ready-to-use devices, complete with robots and detectors, and Fluidigm focusing its strategy on soft lithography enabled microfluidic chips.

From the pharmaceutical HTS research perspective, some of the advantages of microfluidics have not materialised. Microfluidics certainly have assisted with assays that require minimal amounts of precious reagents, but the multiplexing potential has not been realised.

Nanotechnology can learn lessons here. Not only must technologies offer advantages in sensitivity and throughput, they must be resistant to biofouling and allow for massively parallel processing to be useful to HTS. 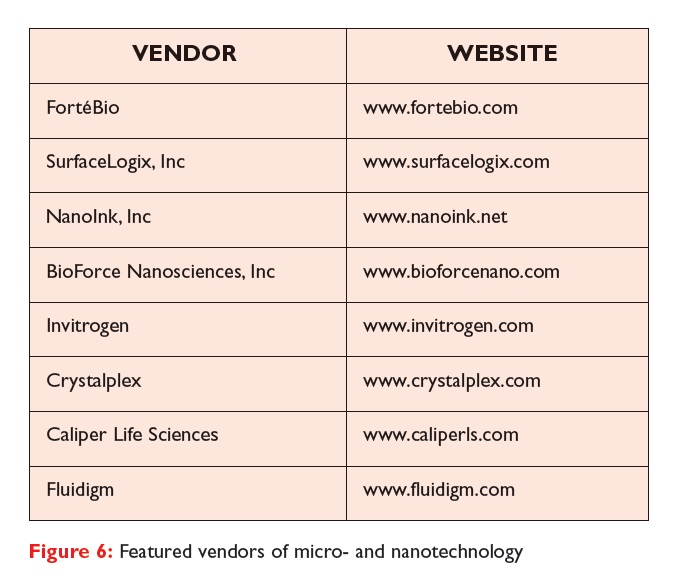 Other nanotech applications in medicine

The early stages of drug discovery provide a logical starting point for examining nanotech applications to biomedical technologies, since the experiments are in vitro, biochemical assays. However, a number of other medical fields will likely be impacted by nanotechnology. A few notable advances are surveyed briefly here.

Medical diagnostics, a large industry with a history of adopting the latest technologies, shares much technological overlap with HTS. Nanoparticles of some variety promise to feature, from the iron oxide nanoparticles used today as selective MRI contrast agents of the immune system, to next-generation particles that hone via antibody specificity to tumour sites (11). The advantages of nanowires and nanoprobes for throughput and sensitivity for HTS should translate to faster, cheaper, more reliable clinical laboratory studies (15,16).

Similar technology platforms have begun to impact therapeutics. ‘Nanoformulations’ of established pharmaceuticals, stabilised by binding to nanoparticles or within cores of nanoparticles such as dendrimers, are beginning to hit the market. And more novel therapies such as nanoshells that can hone to tumours and be activated to destroy these tissues are around the corner (2).

Finally, the novel material properties of nanomaterials make them probable improvements upon existing biomaterials. Here surface chemistry considerations are paramount. Just as stents coated with immune modulators made treatments for coronary artery disease less invasive and longerlasting, scaffolds coated with neuronal adhesion and growth molecules and surfaces featuring antimicrobial nanoparticles should allow regeneration of damaged nerves and reduction of infections carried on implanted devices (17). Tissue engineering, or the synthetic construction of living tissues, often requires scaffolds that must be designed and assembled on the nanoscale.

So, nanotechnology’s impact will not be only in the laboratory. But nanoparticles, nanoprobes and nanopatterned surfaces will clearly impact the early stages of small molecule drug discovery by increasing the number of compounds screened, decreasing the time and amounts required and allowing more direct and reliable information. In these ways, the ‘science of the small’ can push ever higher the throughput and yield of the screening process.

This article originally featured in the DDW Fall 2006 Issue

Flora Tang is a Director of Research in the Chemical Research and Development division at Amgen. She manages the HTS-Molecular Pharmacology group to support all of the therapeutic areas to perform high throughput biology and to evaluate and to adopt relevant technologies. She has extensive pharmaceutical experience working at SUGEN (Pharmacia), Eli Lilly and GlaxoSmithKline prior to joining Amgen in 2003.