Metabonomics – A generic platform for the investigation of drug toxicity, altered gene function and disease processes 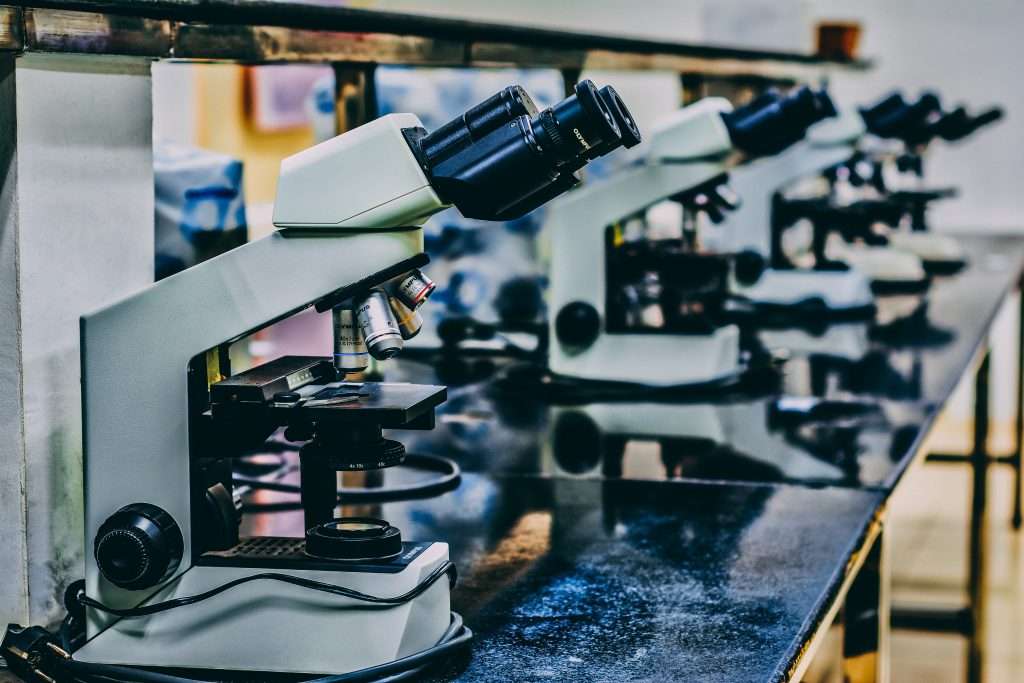 Metabonomics – A generic platform for the investigation of drug toxicity, altered gene function and disease processes

Metabonomics can offer one of the most complete solutions to tackling one of the pharmaceutical industry’s biggest problems attrition. This article discusses the scope and uses of metabonomics in different areas of the drug discovery and development process.

Minimising ‘attrition’ is one of the most important aims of a drug discovery and development programme, and the application of novel technologies that increase the probability of making the right choice early saves resources, and promotes safety, efficacy and profitability in the pharmaceutical industry. Metabonomics is a metabolic systems approach that is complementary to genomics and proteomics, which allows the characterisation of metabolic disease processes, genetic modifications and drug toxicity.

In particular, metabonomics is focused on the study of altered whole organism metabolic control and homeostasis in complex systems where there are many interacting cell types performing different biochemical functions at the same time. Because of the integrative nature of the approach, metabonomics can add significant value to conventionally derived information on drug utility at several stages in the discovery and development process where complex system function needs to be understood (1,2).

Studying the effects of drugs on whole organisms by metabonomics, relies on multiparametric measurement of alterations in metabolism to a stressor or intervention. This and related metabolomic approaches can also be readily adapted to investigate the functional consequences of genetic modification (6-8), which is potentially of great importance in the creation and validation of new models of human disease and efficacy.

Thus, there is considerable scope for the application of metabonomic approaches within the pharmaceutical industry from discovery through clinical development and beyond specifically in the following areas:

– Early in vivo toxicological testing and screening based on mechanisms.
– Lead compound selection and pre-lead prioritisation.
– In vivo efficacy screening in animal models.

Knowing the genome sequence of humans or other species does not of itself explain the fundamental nature of most disease processes, and there is much interest in approaches that relate gene expression to phenotypic outcome. Several technologies are being developed to achieve this end, viz:

In complex organisms, these features represent interdependent levels of biomolecular organisation and control which are also impacted by environmental events and stressors throughout life (5). Some of the main relationships between the various levels of biomolecular organisation and the interactions between gene-proteins-metabolites and environmental factors that need to be studied to understand the whole organism and drug intervention are summarised in Figure 1. 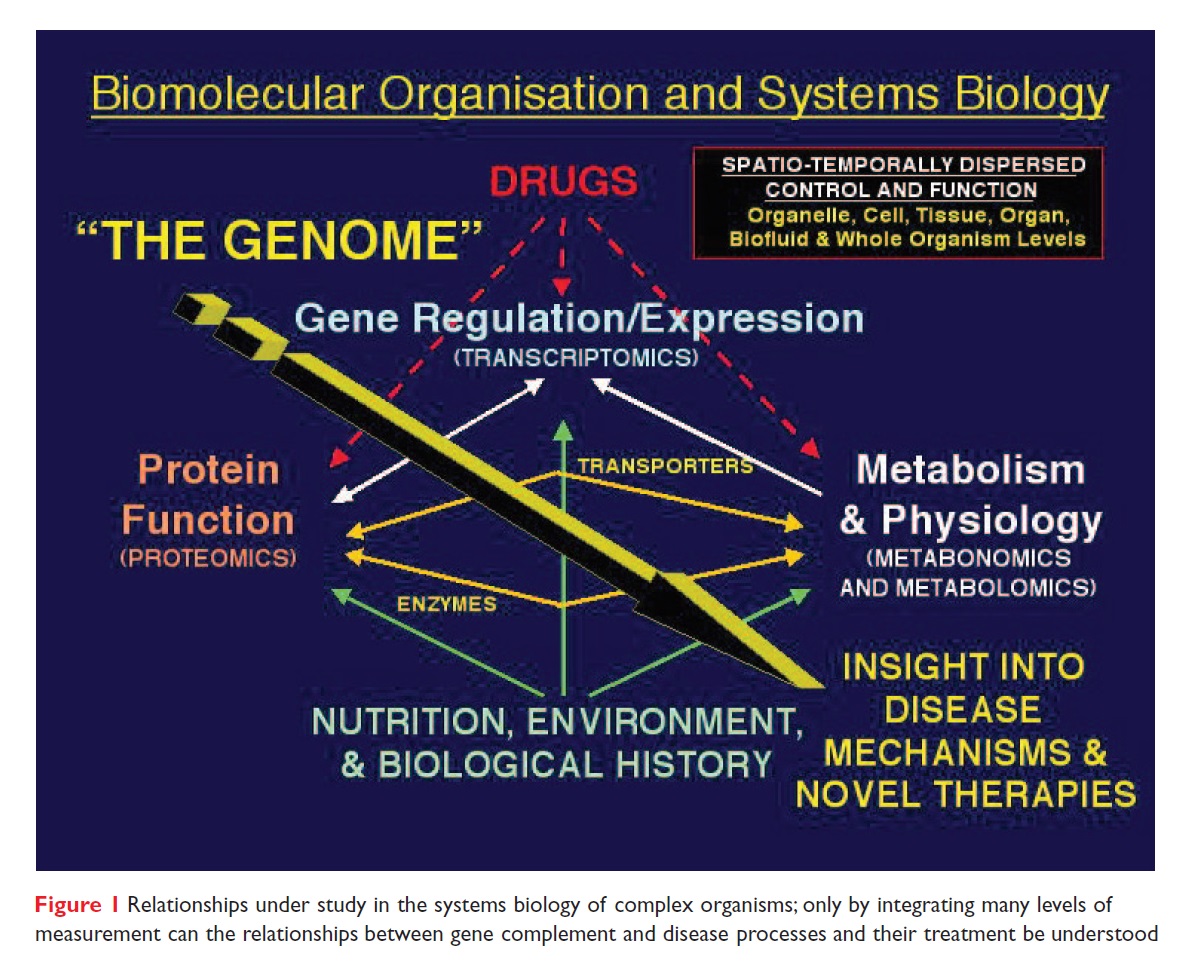 Note that there are many cell types interacting in mammals and their functional state is linked together by metabolic axes that communicate through the body fluids and that metabolic regulation of the whole system is dispersed in space and time. The characterisation of the different levels of system activity, by appropriate analytical methods, describes changes in biological activity as complex multivariate data sets that can be analysed using a variety of chemometric and bioinformatic tools (3).

The aim of such procedures is to extract latent biochemical information that is of diagnostic or prognostic value, and reflects actual biological events rather than potentials for disease offered by gene expression and proteomic data collected after exposure to a drug or stressor. It is thus necessary to relate real world or end-point observations to the measurements provided by the ‘-omics technologies’ (Figure 2) but modelling this is complicated by the time-displacement of many of the distributed interactions. 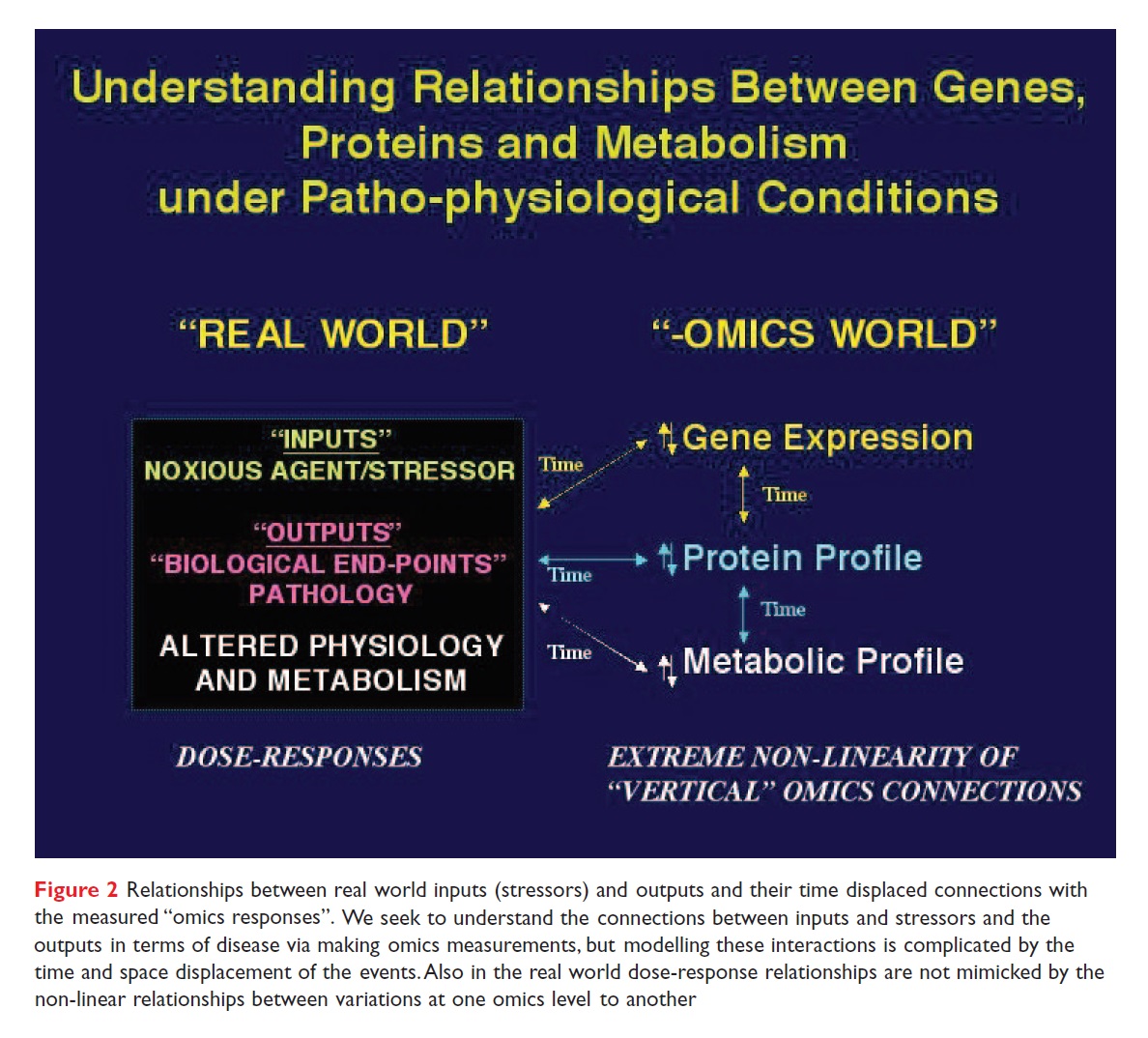 This enables the understanding of the relationships between the inputs that change omics responses and the outputs of those responses. Metabolic changes are real-world endpoints in their own right, whereas gene expression changes are not, merely giving the potential for an end-point change (3). As such, metabonomics provides a useful practical connection between the other omics platforms and the real pathological end-points.

Metabonomics offers a complementary approach to genomics and proteomics that gives information on whole organism functional integrity over time following drug exposure (5). Target tissues or processes and biomarkers can be identified via characteristic changes in the pattern of concentrations of endogenous metabolites in biofluids that relate to site and mechanism of toxicity.

A substantial body of work has been performed in this area using NMR spectroscopy as a lead tool. NMR is non-destructive of the sample and provides an unbiased overview of many important metabolites present in biosamples (1). 1H NMR analysis of biofluids has uncovered novel metabolic markers of organ-specific toxicity in the laboratory rodent, and this ‘exploratory’ role is one in which biofluid NMR spectroscopy excels (9,10).

However, it should be noted that other mass spectrometric-based techniques also provide powerful multivariate analytical probes especially when combined with Gas Chromatography (8) or liquid chromatography. Indeed, the newly developed (by the Waters Corporation) approach of ultra performance (very high pressure liquid chromatography, UPLC™) offers many advantages in metabonomic analysis in terms of resolution and sensitivity, but is not yet fully commercially available.

Returning to NMR spectroscopy, which is currently the best-established method for pharmaceutical and clinical metabonomics (1,3), total potential biomarker information in NMR spectra of biofluids is very rich, as hundreds of compounds representing a variety of metabolic pathways can be measured using appropriate mathematical processing.

The NMR spectrum of a biofluid can be conveniently divided into ‘biomarker windows’, which are spectral regions that often contain signals from metabolites associated with specific targets for toxicity, eg renal and hepatic (9), as well as more subtle toxicological lesions such as phospholipidosis (11,12). Many such windows exist in NMR spectra of biofluids and diagnostic information on hundreds of different types of disease or toxic processes (only a few of the known possibilities are shown) can potentially be derived from one measurement (3).

While toxins may affect gene regulation or expression directly, significant responses may be completely unrelated to gene switching. In the latter case, genomic and proteomic methods are likely to be ineffective. However, all drug-induced effects involve disturbed endogenous metabolite concentration ratios, resulting from direct chemical reaction, altered binding to macromolecules, modified control mechanisms and induction or inhibition of enzymes.

If these disturbances overwhelm compensatory or adaptive mechanisms, consequences recognised as toxicity occur. As metabolite concentrations in several key body fluids relate to cell and tissue processes, so are toxinor disease-induced disequilibria reflected in those fluids. Using the pattern recognition approach, the NMR spectra can be used for:

The information derived from databases of NMR spectra can be maximised by use of appropriate chemometric and multivariate analytical strategies3. Preliminary analysis involves the application of unsupervised pattern recognition methods such as Principal Components Analysis (PCA) or cluster algorithms that assume no prior knowledge of sample class (Figure 3). 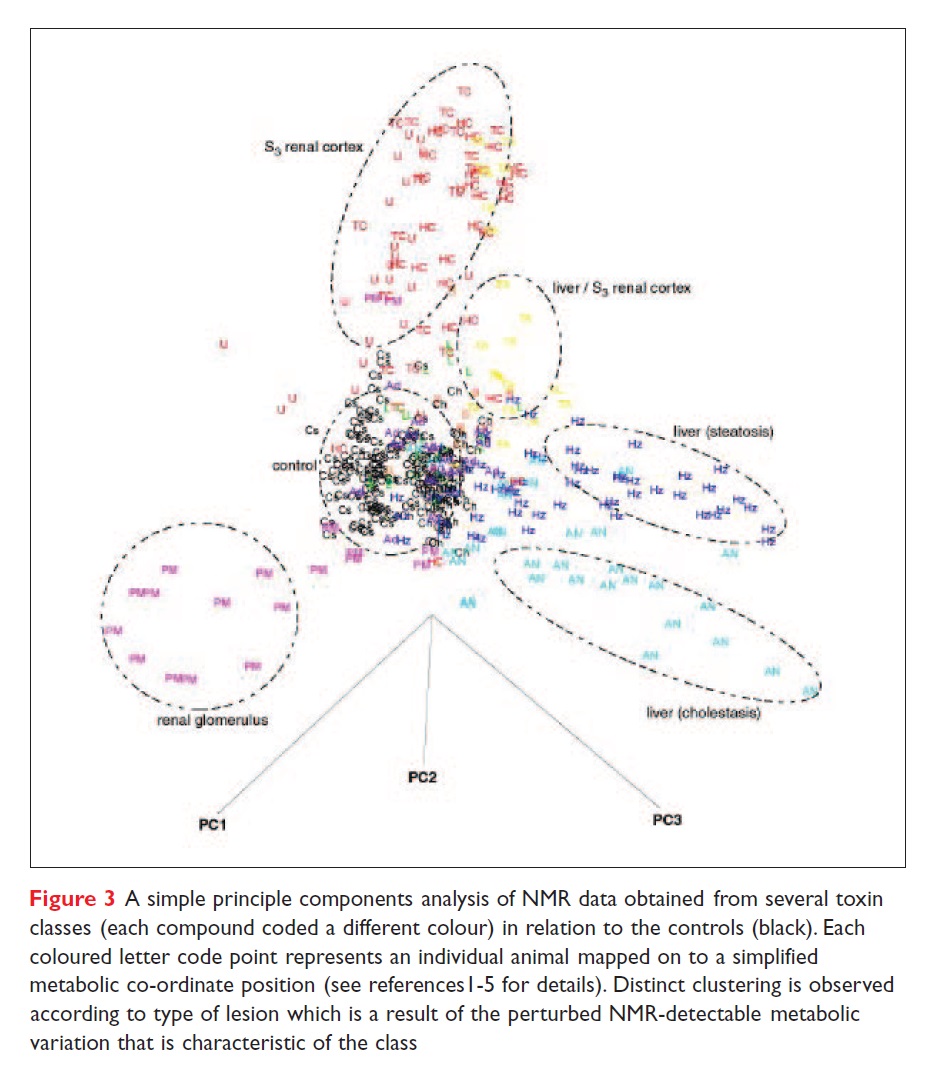 The COMET project will not terminate until 2005 and by this time the time-related metabolic effects 147 compounds will have been studied in low and high dose conditions in rats and in some cases mice in order to generate novel metabolic biomarkers of drug toxicity and to enable the construction of expert systems for toxicological screening based on urine analysis.

So far the results have been encouraging with the development of new methods for comparing toxicological similarities of unknowns to the large metabolic database and a high degree of success in determining the classification of toxicity of unknowns and test sets (15). A major publication on the effectiveness of this approach as a screening tool is currently being prepared.

Metabonomics as a functional genomic tool

Metabonomics can be used to separate classes of experimental animals such as mice and rats according to their strain based on the endogenous metabolite patterns in their biofluids (2,5,6). This is due to the fact that differences in ‘silentgene’ function between strains can influence the fluxes of metabolites through many key intermediary pathways resulting in distinct animal ‘metabotypes’ (6).

Such differences may help explain differential toxicity of drugs between strains where the metabolic fate and hence potential toxicity of the drug itself is linked to the activity of endogenous pathways. There is also a strong indication for the use of metabonomics in the phenotyping of mutant or transgenic animals and the investigation of the consequences of transgenesis. In a recent study we have shown that the transfection process itself can cause significant metabolic differences in hepatoma cell lines due to cell membrane disruption in the host cell (16).

It is important to differentiate such ‘unwitting’ consequences of the genetic engineering process from the ‘witting’ or intended result, as these can potentially confuse the interpretation of the function of particular genes or gene classes when the cell system or organism is examined for the physical effects of the intervention. This is potentially important to pharmaceutical companies trying to genetically-engineer new animal models of disease using biochemicallyinvasive transfection procedures.

Furthermore, metabonomic approaches can give deep insight into the metabolic similarities or differences between mutant or K/O animals and the human disease processes that they are actually intended to simulate. If the veracity of an animal model can be established using metabolic criteria, ie biomarkers of the disease process, then it may also be possible to monitor the efficacy of novel therapeutic agents (normalisation of the biochemical profile) using metabonomic criteria. Such approaches may be of great future value to the pharmaceutical industry in the quest for the discovery of safe and efficacious new drugs.

In the clinic, metabonomics also offers promising new diagnostics and biomarker generation capabilities. For instance, it has been shown that unique combination markers of atherosclerosis can be discovered using combined spectroscopic and multivariate statistical analysis4 and that it is possible to determine the level of atherosclerotic damage (Figure 4) using minimally invasive blood plasma analysis in patients as measured against ‘gold standard’ techniques such as angiography (itself a highly costly and potentially dangerous procedure). 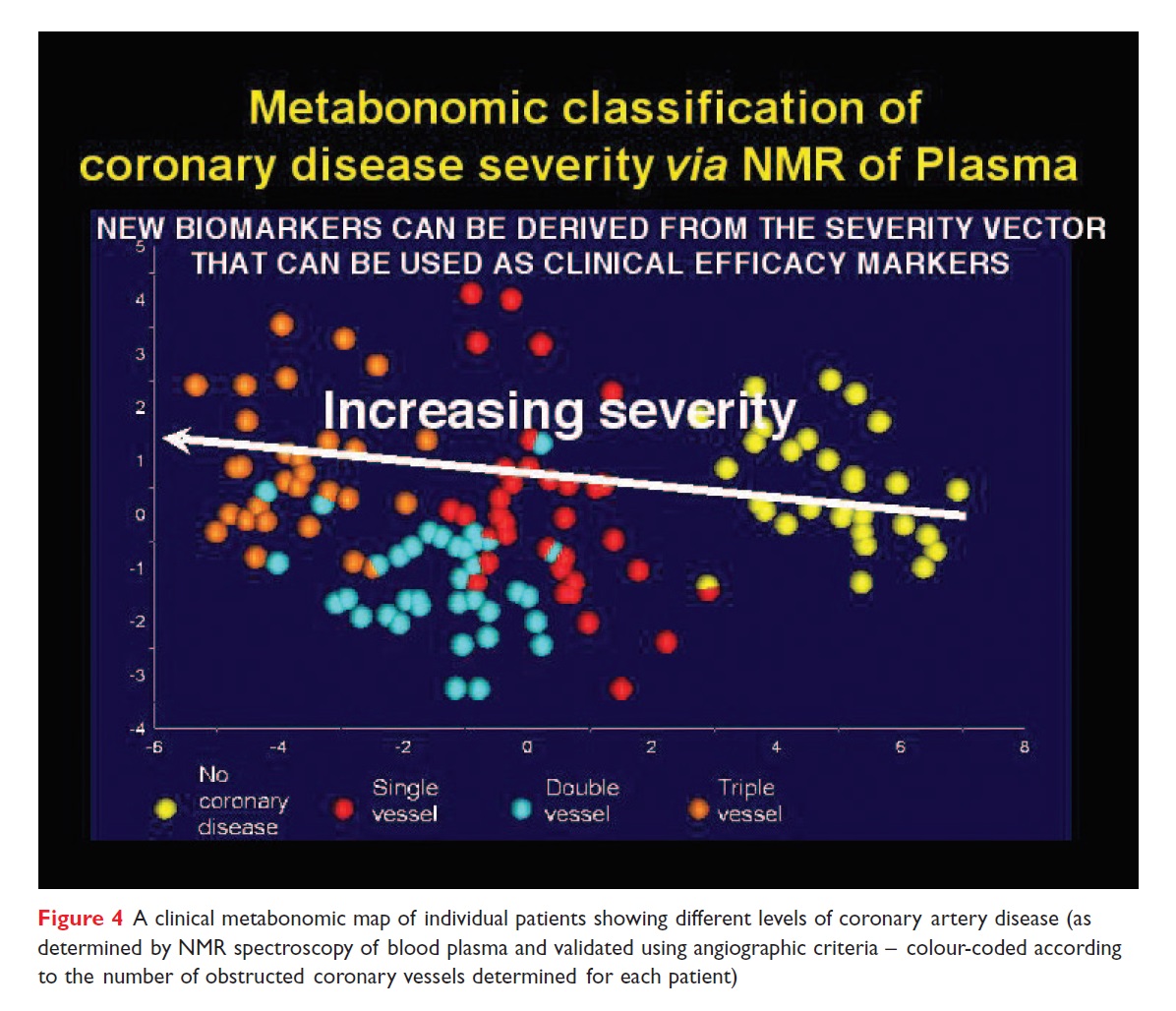 Such studies are not only valuable in the clinic as potentially important diagnostic aids, but also as a means for uncovering novel biomarkers that could be used for either quantitatively monitoring therapeutic efficacy of novel compounds. Also such models can generate new criteria with which to assess the metabolic similarities between human conditions and the animal models that are created to mimic them in pharmaceutical discovery and development studies.

Overall, metabonomics offers one of the most complete solutions to tackling problems surrounding pharmaceutical attrition as it allows minimally invasive repeat studies in man and animals and the potential for translatability of data and models between species in a way not currently offered by genomics or proteomics. Furthermore, metabolic end-points are in the ‘real world’ and thus more readily related to clinical biochemical or pathological end-points than most other omics technologies.

As such, metabonomics and related techniques are now being widely embraced by big pharma and the US FDA and EPA (both of whom have set up internal metabonomics facilities in the last two years) as the next step forward in the battle of understanding complex system failure due to xenobiotic exposure or disease processes. DDW

This article originally featured in the DDW Summer 2004 Issue

Professor Jeremy Nicholson is Head of Biological Chemistry at Imperial College where he has pioneered the use of advanced spectroscopic and pattern recognition methods for metabolic profiling for more than 20 years. The author of more than 400 scientific papers, he leads an internationally renowned research team working on metabolic disease mechanisms. His work has been recognised by many awards including The Royal Society of Chemistry Silver Medal for Analytical Chemistry (1992) and Gold Medal for Analytical Science (1997), The Chromatographic Society Jubilee Silver Medal (1994), The Pfizer Academic Prize for Chemical and Medicinal Technologies (2002) and the Royal Society of Chemistry Medal for Chemical Biology (2003). Professor Nicholson is a Fellow of the Royal Society of Chemistry, The Institute of Biology and The Royal College of Pathologists.

13 Nicholls,A, Nicholson, JK and Mortishire-Smith, R. (2004) Use of metabonomics to identify impaired fatty acid metabolism as the mechanism of a drug-induced toxicity. Chemical Research in Toxicology (in press).

14 Lindon, JC, Nicholson, JK et al (2003).The role of metabonomics in toxicology and its evaluation by the COMET project.Toxicology and Applied Pharmacology 187 137-146.