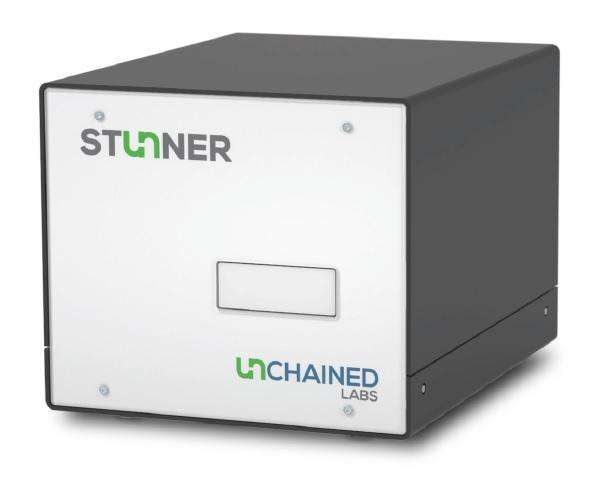 Stunner pulls double-duty so you don’t have to. It’s the one and only system that combines high-speed UV/Vis spectral analysis and Dynamic Light Scattering (DLS) for quantifying concentration and nailing down protein stability.

Stunner measures highly concentrated samples in a snap, without needing to dilute or clean up. Knock off concentration, hydrodynamic size, polydispersity, and detection of aggregates on the same samples all in one shot. You can also run colloidal stability experiments to narrow down the best formulations or design your own custom apps.

What if you could get a better read on the quality of your biologics and use less sample at the same time? Stunner takes your protein characterization to the next level by combining high speed UV/Vis spectral analysis with Dynamic Light Scattering (DLS). Using micro-volume Stunner Plates, Stunner measures both the concentration and quality of 96 samples in just 1 hour. The Stunner Plate uses 2 μL of sample and there’s no risk of contamination or evaporation. Measure highly concentrated samples straight up so you don’t introduce error by making manual dilutions. Pipet your samples right into the Stunner Plate or hook it up to your favorite automation system if you need high throughput. Tack on 21 CFR Part 11 compliance if you need it. You choose how to sync up your sample quantity and quality measurements.

This technical note describes how you can use Stunner to accurately measure protein concentration and particle size distribution in a single experiment with no additional setup (Figure 1). 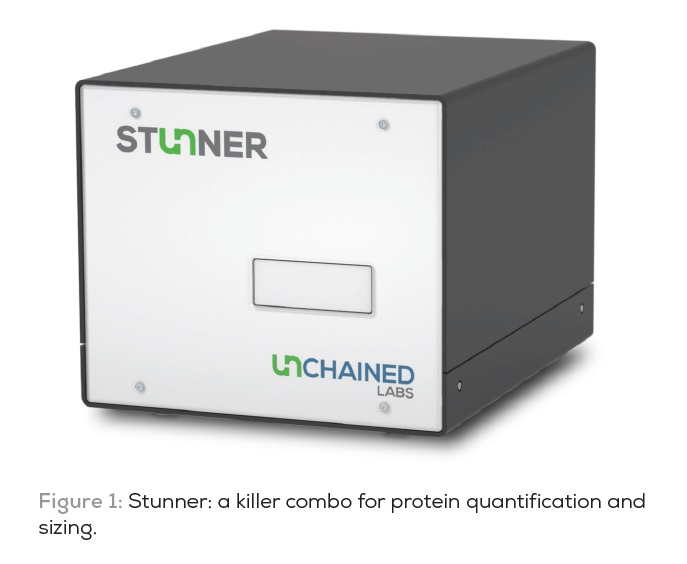 Get the full scoop on your biologic with the first and only system that can perform UV/Vis quantification and DLS analysis at the same time. Stunner measures your biologics from 0.03−275 OD, applying a wavelength-specific correction that provides more accurate quantification. At the same time, use DLS to measure hydrodynamic diameter and identify the presence of aggregates in solution. Optimize your best candidates or formulations by determining the aggregation propensity of your samples with the B22 and kD applications. You can even unleash Stunner’s capabilities to create your own custom applications with Homebrew

Concentration with sizing and polydispersity

DLS is a sensitive and widely used method for measuring the hydrodynamic size of proteins and small molecules in solution. Stunner meets the highest industry standard, with the ability to detect even small proteins like lysozyme at 0.1 mg/mL. You can use DLS to verify the expected size and polydispersity of your molecule, and uncover any aggregates or impurities that may be contaminating your sample.

Polydispersity is a measure of the heterogeneity of the sample size distribution. If particles in solution are non-uniform in size, a high polydispersity index will be measured. Low polydispersity values indicate more uniformity in particle size. At the same time that you measure protein concentration by UV/Vis, get more information on the quality of your sample with polydispersity.

DLS data and absorbance spectra for mAb 1 and mAb 2 are shown in Figure 2. The protein mAb 1 shows the expected size for a monomeric monoclonal antibody and has a narrow polydispersity index < 0.1 (Figure 2A). The DLS data for mAb 2 indicates the presence of both small and large particle sizes in solution, which is consistent with a polydisperse size distribution in the range of 0.1−0.4 (Figure 2B). At the same time DLS is measured, the exact protein concentration is reported for each sample. 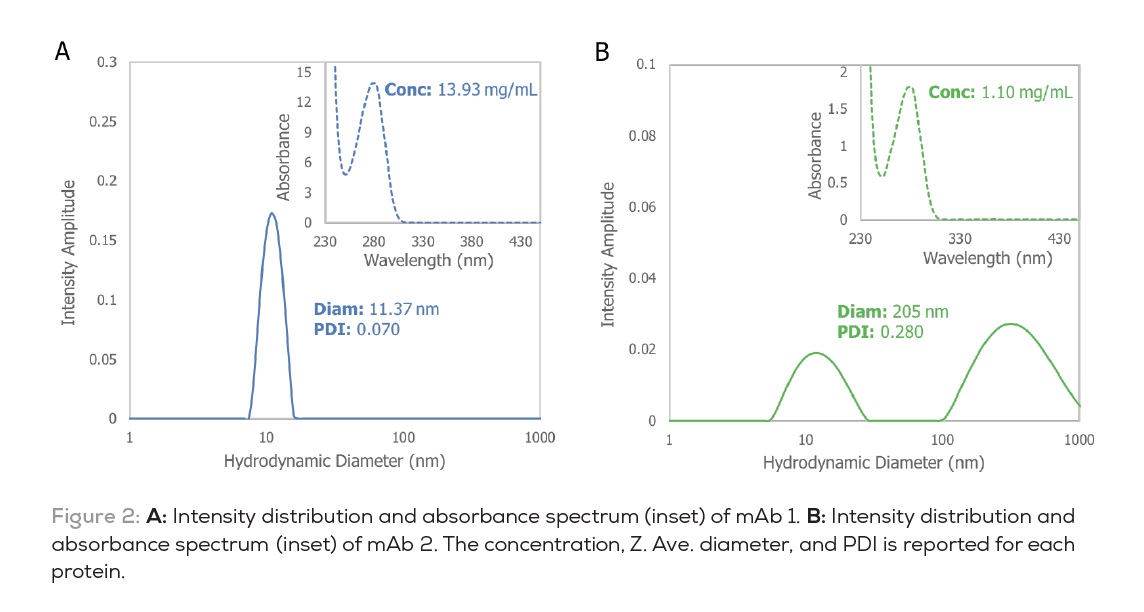 Biopharmaceuticals can be difficult to quantify when they are formulated at high concentrations, due to increased sample viscosity and turbidity. Stunner can overcome these challenges while maintaining high reproducibility and high-throughput.

Stunner Plates have precision and accuracy on lock down with its unique features. Every sample well on a Stunner Plate contains two micro-cuvettes with fixed path lengths of 0.1 and 0.7 mm. These features enable reproducible measurements across a large dynamic range from 0.02−200 mg/mL of protein. Highly concentrated protein solutions are typically viscous. The microfluidic channels in the Stunner Plate are compatible with samples up to a viscosity of 40 cP.

Highly concentrated proteins can also present challenges in quantification due to solution turbidity caused by aggregation. To account for this, Stunner applies a wavelength-specific background correction that accounts for differences in the light scattering profiles as a function of wavelength (Rayleigh scattering). This approach outperforms single wavelength background subtraction achieved with conventional UV/Vis measurements.

The full UV/Vis spectrum is measured from 230 to 750 nm, and the software comes complete with built-in applications for protein and nucleic acid quantification. Make standard measurements at 280 or 260 nm, or use an Unmix application to perform impurity deconvolution.

The mAb dilution series is shown in Figure 3. The measured OD values were plotted as a function of the target protein concentration. The small error and linear correlation between replicate measurements indicates good reproducibility, even at the upper spectral limit of Stunner (275 OD). 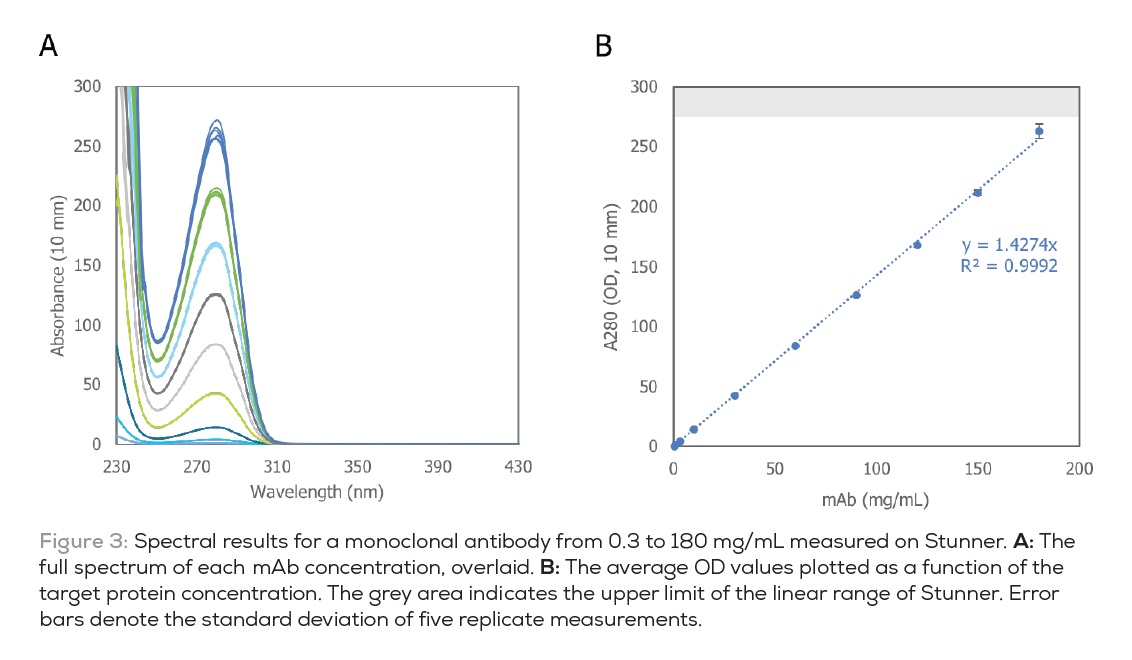 Weak, non-specific interactions often play a key role in the solubility and aggregation propensity of proteins in solution. The diffusion interaction parameter (kD) can measure these interactions and help you decide which proteins in different formulations are more likely to aggregate. Once you’ve picked your top constructs or formulations, you can refine them further using this method. In a single experiment, get a solid read on colloidal stability by independently measuring accurate protein concentrations, kD, and B22 values.

A therapeutic monoclonal antibody, Adalimumab, was prepared at 10 mg/mL in 10 mM Histidine buffer at pH 6.0 containing different excipients (150 mM sodium chloride, 150 mM arginine, or 150 mM sucrose). Dilutions were prepared down to 1 mg/mL for a total of 8 samples (10, 8, 6, 4, 3, 2, 1, 0 mg/mL protein) for each condition. Two μL of each sample were loaded in triplicate in a Stunner Plate, and the B22 & kD application was Figure 3: Spectral results for a monoclonal antibody from 0.3 to 180 mg/mL measured on Stunner. A: The full spectrum of each mAb concentration, overlaid. B: The average OD values plotted as a function of the target protein concentration. The grey area indicates the upper limit of the linear range of Stunner. Error bars denote the standard deviation of five replicate measurements. selected using 4 DLS acquisitions of 5 seconds each. After measuring the hydrodynamic diameter of each sample, Stunner Analysis software uses the known refractive index of the solvent to calculate the diffusion coefficients. The diffusion coefficient is plotted as a function of the measured protein concentration at 280 nm. The slope and intercept of the plots are then used to calculate kD values.

A strong positive value for kD was observed for the formulation with no excipients, indicating net repulsive interactions between protein molecules in the sample (Figure 4). 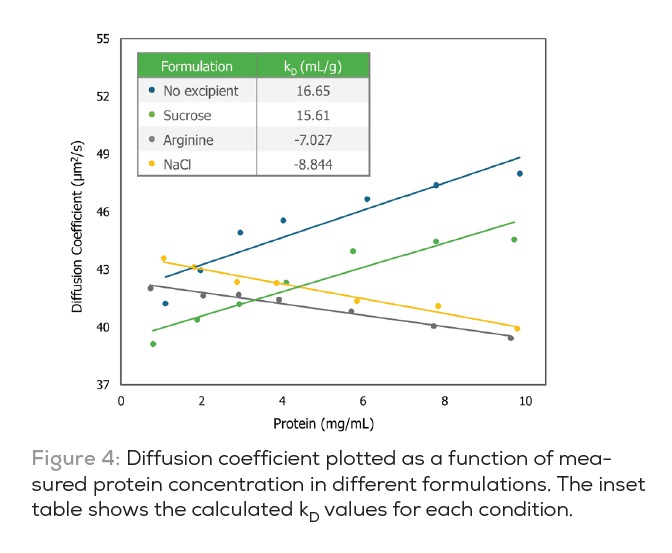 The formulation with sucrose also shows a positive kD value with a similar magnitude, consistent with the known protein stabilizing effect of sugar solutes through a hydration-promoted mechanism (1). On the other hand, the formulations with sodium chloride and arginine yield negative kD values. The negative kD values indicate net attractive interactions between protein molecules, with sodium chloride having the largest effect on the aggregation propensity of Adalimumab in this series. In general, it is recognized that sodium chloride interacts preferentially on the hydrophilic surface of a protein, minimizing the charge repulsion between protein molecules (1). This in turn can lead to self-association of proteins in solution, especially at high concentrations. As a pharmaceutical excipient, arginine can either stabilize or destabilize a protein depending on the nature of the surface-exposed amino acid residues. In this case, arginine plays a role as a destabilizing excipient, leading to preferential self-association for Adalimumab.

To measure B22 values, PEG40 is used as a reference standard. The average scattering intensity of PEG40 was measured in a Stunner Plate using DLS. Adalimumab was prepared at 10 mg/mL in 10 mM Histidine buffer at pH 6.0 containing different excipients (150 mM sodium chloride, 150 mM arginine, or 150 mM sucrose). Dilutions were prepared down to 1 mg/mL for a total of 8 samples (10, 8, 6, 4, 3, 2, 1, 0 mg/mL protein) for each condition. Two μL of each sample were loaded in triplicate in a Stunner Plate, and the B22 & kD application was selected using 4 DLS acquisitions of 5 seconds each. Stunner Analysis software uses the average scattering intensity of the reference standard along with the measured light scattering intensity from each sample to calculate the Rθ value for each protein concentration. The slope of the linear fit is used to calculate B22. The UV/Vis spectrum is measured simultaneously so you can be confident that you’re plotting accurate protein concentrations.

A strong, positive value for B22, as observed in the formulation with no excipients, suggests net repulsive interactions between protein molecules (Figure 5). 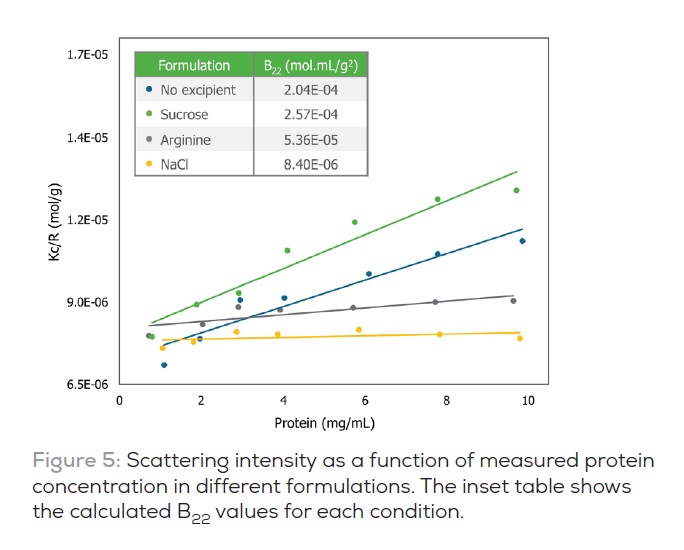 Design your own experiments with the Homebrew application. Users can customize their settings by including sizing & polydispersity measurements, selecting a specific wavelength to monitor, incorporating a background correction method of choice, and selecting their extinction coefficient analysis. Additional data processing is available in the Homebrew results screen with user-defined equations. Stunner Analysis can save you time by calculating the average concentration of replicates, or take it a step further and perform just about any type of mathematical operation on your absorbance data.

A monoclonal antibody was prepared at 10 mg/mL in 10 mM Histidine buffer at pH 6.0, with or without 0.1% Polysorbate 80 (PS 80). Separate sample vials containing 3.5 mL of the protein solution were loaded onto a VWR Analog vortex mixer. The samples were mixed at maximum speed (10) at ambient temperature and the sample vials were removed at different time points (20, 30, 120, 180 min). A control mAb solution was also prepared, which was not stressed by vortex mixing. Samples were stored at 4°C prior to measurement. Two μL of each sample was loaded in triplicate in a Stunner Plate and the absorbance spectrum and DLS of each solution was measured, using 4 acquisitions of 5 seconds each. The aggregation index was calculated for each sample in the Homebrew application using the following equation (2):

The aggregation index for each formulation is shown in Figure 6. 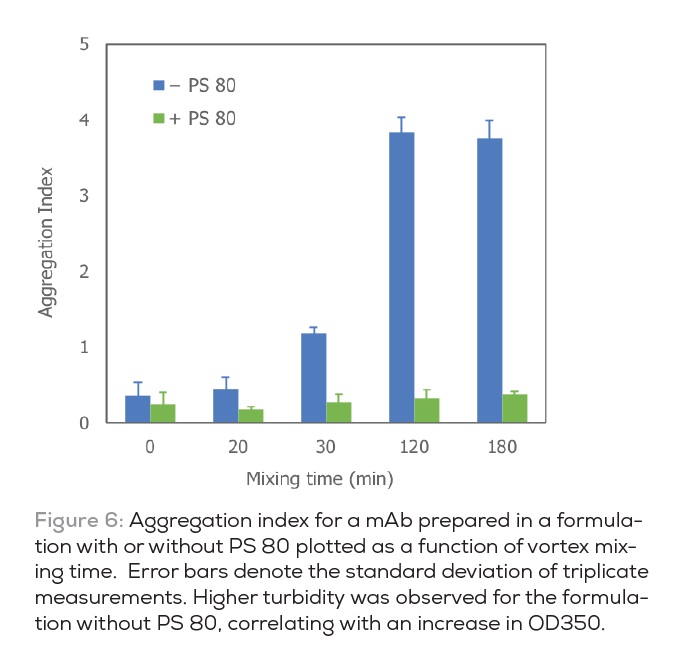 The protein in the formulation without any surfactant (− PS 80) undergoes significant aggregation under vortex mixing stress. Addition of 0.1% PS 80 prevented protein aggregation, indicated by the negligible increase in the aggregation index for this formulation (+ PS 80).

Samples that were mixed for 120 and 180 min became visibly turbid, suggesting the presence of large particles in solution on the order of hundreds of nm in diameter. Since DLS and absorbance can be measured in a single experiment on the same set of samples, the aggregation index values calculated from absorbance were verified by DLS particle size measurements (Table 1). The large hydrodynamic diameter and high PDI value for the (− PS 80) formulation after vortex mixing confirmed the presence of large particles in solution.

Stunner combines UV/Vis spectral analysis and DLS for quantifying concentration and stability measurements on one platform. Unique to Stunner is its capability to measure highly concentrated samples and track particle quality in a high-throughput, dilution-free and reproducible manner, using just 2 μL of sample. Other measurements, such as B22 and kD, can be obtained in tandem to assess colloidal stability and compare aggregation risk for different candidates or formulations. Stunner is the first and only system that enables simultaneous quantification of low to high concentrated samples and particle size distribution, so you can get more information with less sample.

This white paper was sponsored by Unchained Labs, you can download the orignal PDF here.