Is Amyloid-related Toxicity an Inevitable Consequence of Ageing? 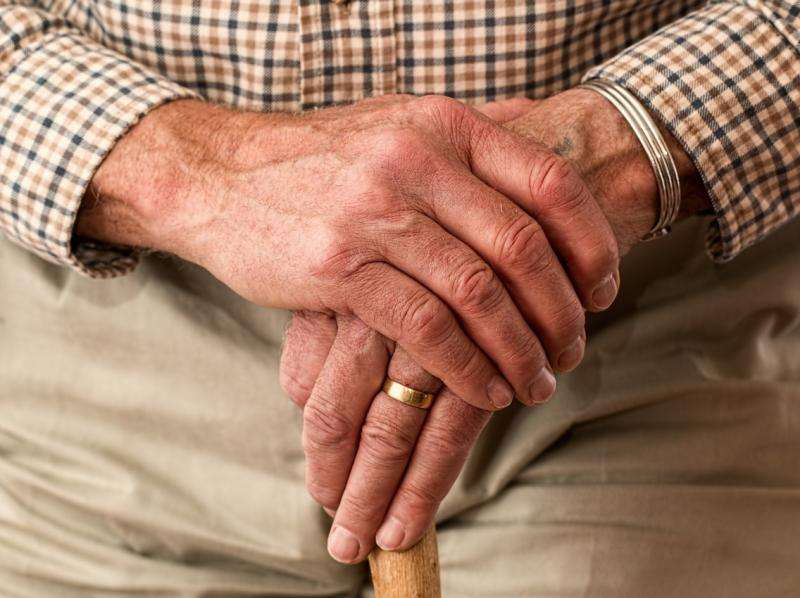 Is Amyloid-related Toxicity an Inevitable Consequence of Ageing?

Amyloid-related toxicity need not necessarily be the inevitable consequence of ageing, if some of the new drug discovery strategies to treat neurodegenerative and other ageing-related diseases succeed in the clinic.

An increasing number of companies are now focusing on developing diseasemodifying compounds that directly inhibit the formation of toxic forms of amyloid. Although these compounds have yet to be definitively proven in the clinic, some recent announcements have stimulated increasing levels of interest in their development.

Although multiple factors are known to influence the ageing process, a variety of chronic degenerative diseases have all been linked to a fundamental and generic pathogenic process, during which amyloid-like proteins ‘clump together’ or aggregate. In each of these pathologies, a specific protein or peptide aggregates to form a toxic species that appears to underlie the progressive degeneration of the ageing body.

It is estimated that diseases resulting from the toxicity of amyloidrelated proteins affect more than 50 million people in the developed world today, costing the world economy at least $500 billion each year in direct healthcare and lost productivity. Moreover, the prevalence of these diseases is expected to double by 2030 and their costs to increase dramatically with an ageing population, unless effective new treatments are discovered soon.

More than 20 different clinical syndromes have now been linked to the common pathogenic process of amyloid-related toxicity, including serious neurological conditions and degenerative diseases of the peripheral organs, such as in type II diabetes and renal complications. Thirteen of these diverse pathological conditions are listed in Table 1, along with the ‘toxic’ protein that underlies the condition. 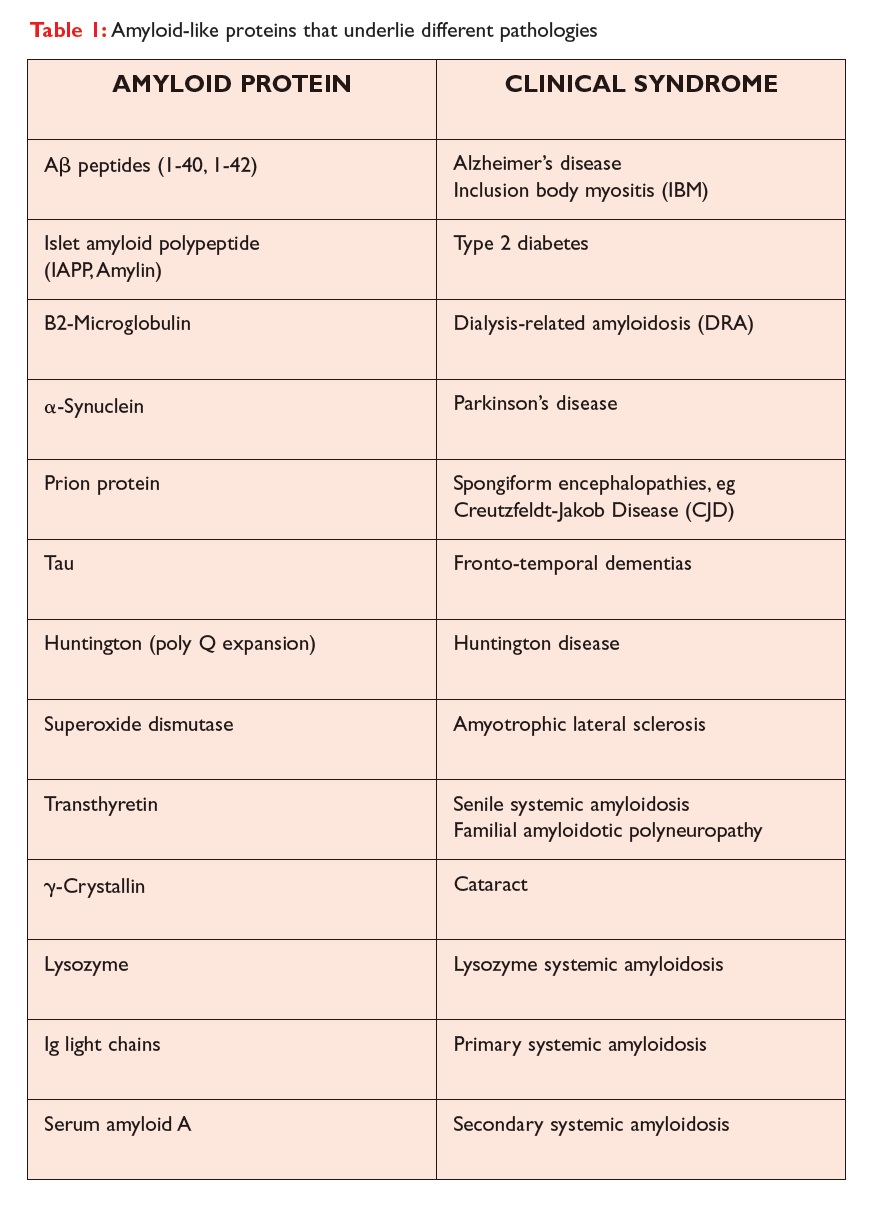 The structure of each of the amyloid-like proteins or peptides identified in Table 1 can shift from their correctly folded form to misfolded, abnormal conformations or ‘shapes’ that makes them prone to aggregation. During ageing, the aggregation process leads to the formation of toxic species that cannot be adequately cleared from the body, increasing the degeneration of various tissues and organs.

This generic pathological process is illustrated in Figure 1, which shows the process that can result in the formation of the toxic species following protein misfolding.

Pre-eminent among the various diseases resulting from amyloid-related toxicity is Alzheimer’s disease: there are currently an estimated 27 million sufferers worldwide and the economic costs of which have been estimated to be $100 billion per annum in the US alone.

Historically, the role of amyloid in Alzheimer’s disease has been a topic of debate. This is due in part to the observation that the distribution of amyloid plaques in the brain tends to correlate rather poorly with the specific regions of the brain affected by the disease.

Today, however, mounting evidence is entirely consistent with amyloid having the central role in Alzheimer’s pathology (1) and with the toxic soluble species of amyloid producing the functional deficit in memory and learning at very low concentrations (2). These discoveries have led to an increasing interest in this fundamental pathological mechanism by the pharmaceutical industry, which has been exploring opportunities for therapeutic intervention.

What are the opportunities for drug discovery to find new treatments?

The pharmaceutical industry continues to focus on areas where it has historically been productive in drug discovery. For example, approximately 75% of current drugs inhibit proteins that are either Gprotein- coupled receptors or enzymes (4), mainly due to the success of medicinal chemistry in discovering selective drugs that modulate the function of these proteins. In the amyloid field, for example, the industry has mainly focused on the steps that precede the aggregation process, by blocking production of the amyloidogenic peptides in the first place.

One of the main reasons for the considerable investment in this strategy is that medicinal chemists can exploit their traditional skills by targeting enzymes: in this case, the secretase enzymes that cleave a protein called APP (amyloid precursor protein) to produce amyloid. However, secretases have also been shown to perform many other important biological functions and so it might not be possible to identify inhibitors of these enzymes with an adequate safety profile for chronic human use.

Treatments designed to target steps that follow the aggregation process, on the other hand, might well be better tolerated but are potentially less likely to be effective because they would not prevent formation of the toxic soluble forms of amyloid that could continue to progress the pathology.

Consequently, an alternative and disease-modifying therapeutic strategy would be to inhibit the aggregation process itself, since this appears to be the first step in the pathogenic process of amyloid-related toxicity that is not associated with some normal biological function. This strategy is outlined in Figure 2 and illustrates how toxic forms of amyloid could be cleared from the body by natural clearance and protein degradation processes when the aggregation process is blocked directly by a drug.

Although it is often difficult to determine the current internal focus of the more established pharmaceutical companies, one way to benchmark trends in drug discovery is to analyse deal-making activity. Larger companies are increasingly relying on the biotechnology sector to provide more innovative products and technologies, which they can then in-license or acquire when they are of proven value.

There are several deals that are directly relevant to the focus of this editorial on inhibitors of the formation of toxic forms of amyloid. In 2000, Serono exercised its option to acquire worldwide rights to Axonyx’s amyloid and prion inhibitory peptides, the subject of an original pre-clinical agreement signed the previous year. Serono has subsequently taken at least one of these compounds into Phase I to develop drugs for the potential treatment of Alzheimer’s disease and other neurodegenerative conditions.

Axonyx was reported to have received an upfront payment of $1.5 million and future payments up to $21 million including milestones. Although the Serono/Axonyx peptide entered Phase I some time ago there have not yet been any reports of positive Phase II data.

In 2004, Acumen Pharmaceuticals entered into a pre-clinical research collaboration and licence agreement with Merck to research and develop disease- modifying therapeutic drugs for Alzheimer’s disease and other memory related disorders. As part of the deal, Merck has acquired the worldwide exclusive rights to Acumen’s technology.

Acumen was reported, under the terms of the agreement, to have received an upfront payment and annual research funding, and continue to be eligible to receive $48 million in research, development and approval milestones for the first antibody product that is commercialised by Merck. Acumen will also be eligible to receive equivalent milestone payments for the research, development and approval of any vaccine products.

Merck will fund research and development and will have exclusive responsibility for commercialising collaboration products. Merck will pay to Acumen royalties on the sale of products from the collaboration and milestones payments for the attainment of certain sales levels.

In early 2006, Senexis announced a deal with BTG, where the company in-licensed two different series of compounds that both reduced the toxicity of amyloid in various biological systems and therefore have great relevance to the treatment for Alzheimer’s disease. The objectives of this deal are for Senexis to discover and develop compounds based on BTG’s in-licensed small molecule inhibitors that are not only as potent and selective as peptides but are also orally bioavailable.

By contrast, other classes of amyloid aggregation inhibitors are often trading off potency and selectivity versus the potential for oral bioavailability5. Consequently, Senexis is now focused on developing compounds where both these properties can be obtained within the same chemical series.

Later in 2006, Transition Therapeutics announced a collaboration agreement with Elan for the joint development and commercialisation of AZD-103 (scyllo-inositol) for the treatment of Alzheimer’s disease. AZD-103 is a small molecule that is thought to act by breaking down and preventing the assembly of amyloid. Under the terms of the agreement, Transition received upfront payments of $15 million and is eligible to receive milestone payments of up to $185 million.

How is the current generation of compounds progressing in the clinic?

There are currently four small molecule compounds in clinical development: Transition Therapeutics’ syllo-inositol, Prana’s PBT2, Neurochem’s eprodisate and FoldRx’s Fx-1006A. So far, although there have been various preliminary reports of encouraging efficacy, no detailed conclusive Phase II data has yet emerged for scrutiny. Transition Therapeutics completed a Phase I trial on AZD-103 in 2006 and a co-development deal with Elan for the treatment of Alzheimer’s. In parallel, Elan is also collaborating with Merck on antibody-based approaches.

Furthermore, Elan/Wyeth’s prototype vaccine (AN-1792) did demonstrate some benefit in neuropsychological test battery tasks in Phase II. However, 6% of the patients developed encephalitis: this severe inflammation caused by the vaccine would preclude its therapeutic use. Elan/Wyeth has now shifted to a passive immunisation strategy bapineuzumab (AAB-001), a humanised monoclonal antibody against Abeta which is in Phase II trials.

Prana is developing PBT-2 as a second generation ‘metal protein interaction attenuating’ compound. This is claimed to be superior to its predecessor clioquinol (PBT-1), which had shown some positive results in Phase II but whose development was halted due to manufacturing problems. PBT-2 has successfully completed Phase I and Phase II trials, which demonstrated some positive biomarker and cognitive effects.

In February this year Prana announced that PBT2 had demonstrated safety and tolerability and reduced Abeta 42 in a Phase IIa study of PBT2 in patients with early Alzheimer’s disease. PBT2 also improved ‘Executive Function’ performance in select cognitive tests. In this double blind multi-centre clinical trial, 78 patients in Sweden and Australia were randomised to receive either a placebo or drug capsule once per day for 12 weeks.

Although Neurochem’s Alzhemed (its potential treatment of Alzheimer’s) was inconclusive in the clinic, the company has recently announced that it is now pursuing a drug development programme for eprodisate. Its objective is to obtain market approval for the treatment of Amyloid A amyloidosis following a Phase III clinical trial.

FoldRx is conducting a multinational Phase II/III clinical study with Fx-1006A for patients suffering from Familial Amyloid Polyneuropathy, a rare genetic disease that affects approximately 10,000 people worldwide. FAP is a fatal disorder in which amyloid fibrils are caused by the misfolding of transthyretin. Fx-1006A has orphan drug designation in both the US and EU and the development programme is evaluating the compound as a potential disease-modifying agent.

Although directly acting amyloid aggregation inhibitors have yet to be conclusively proven in the clinic, some deals and recent announcements have demonstrated increasing levels of interest in their discovery and development. In particular, there is a significant unmet medical need and, therefore, an urgent requirement for new disease-modifying treatments for Alzheimer’s and other amyloid-related diseases. DDW

Dr J. Mark Treherne obtained his PhD in receptor neuropharmacology from Cambridge University with funding from Merck and now has more than 25 years’ experience in the discovery of novel treatments for diseases of the central and peripheral nervous systems, including Parkinson’s and Alzheimer’s diseases. Mark was formerly at Pfizer in the UK, which he left to set up Cambridge Drug Discovery and joined Senexis as Chief Executive in 2002.

Dr David Scopes obtained his BSc, MSc and PhD in Chemistry from the University of Manchester, before postdoctoral research at Syntex and at the University of Illinois. David joined Glaxo in 1976 and became a Research Manager, focusing on central nervous system disorders, and then Head of Medicinal Chemistry at GlaxoWellcome in France. David joined Oxford GlycoSciences in 1996 as Director of Chemistry, later becoming Vice- President of Drug Discovery and joined Senexis as Chief Scientific Officer in 2004.