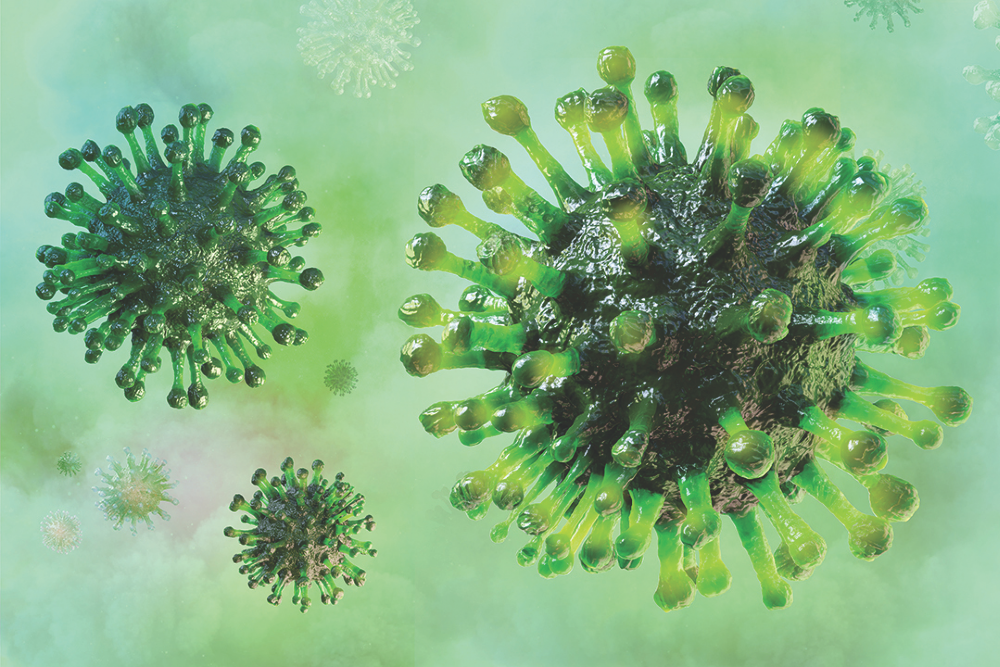 ILC Therapeutics, a biotech company based in Scotland, is developing a synthetic Interferon which has shown great promise against COVID-19 in laboratory testing and will enter clinical trials later this year. It will be, says the company, the first synthetic Interferon based on the most prominent activities of the natural Interferons.

The company believes that its synthetic Interferon, called Alfacyte, will have the potential to prevent COVID-19 hospitalisation in the vast majority of cases by boosting the immune response and preventing the virus from replicating in the body.

Professor William Stimson – who invented Alfacyte and has filed the patents for it – spoke to Lu Rahman.

Professor William Stimson is the founder of the Department of Immunology at The University of Strathclyde and also the Founder and Chief Scientific Officer at ILC Therapeutics. He has been involved in eight start-up/spin-out biotech companies including Solus which was recently acquired. He has been a long-term consultant to five multinational companies including Akzo Nobel, Rhone-Poulenc and Johnson & Johnson. Stimson has published 216 scientific papers and 47 patents. He was involved in the use of the first human monoclonal antibodies for cancer therapy. The synthetic Interferon he has developed is based on the most immunologically-active properties of Interferons, called Alfacyte and is the culmination of two decades of research.

LR: What led to the development of Alfacyte – the process behind it and the timeline?

WS: Alfacyte is the culmination of over 20 years research into the differential therapeutics effects of all 12 subtypes of Alpha Interferon and their effects on the Innate Immune System. To date only the Alpha 2 subtype has been commercialised. It is commonly assumed that all alpha Interferon subtypes have the same properties but this is not the case.

By understanding each subtype’s attributes, I was able to construct a new patented synthetic alpha interferon called Alfacyte that combined the best anti-viral properties into one new molecule. This has the potential to treat an array of viral and infectious diseases and offers us a significant tool in dealing with infectious disease outbreaks in the future.

Lab testing at St Andrews University last year showed that Alfacyte is at least 20 times more effective against COVID-19 cell culture than any other therapeutic Interferon in the market. This was a huge confidence boost for everyone at ILC Therapeutics and we hope to begin clinical trials later this year.

LR: What are some of the benefits of the drug?

WS: Interferons ‘interfere’ with viral reproduction and are the body’s first and best defence against all viral pathogens. Alfacyte is a synthetic patented Interferon-alpha with 11 significant amino acid changes in its receptor binding regions designed to maximise therapeutic impact.

We believe that the therapeutic, which can be administered in patients as an inhalant, has the potential to treat COVID-19, HIV, Influenza, Hepatitis and many other viral pathogens.

In the case of COVID-19, Alfacyte offers enhanced interference to Covid-19 replication as well as activation of NK cells to fight virus infection. It can also potentially reduce ‘off target’ effects and reduce production of cytokine storm mediators.

LR: How has the pandemic affected (negatively and positively) the development of this therapeutic?

WS: There have been positives and negatives. On the plus side there is now growing recognition of the important role of Interferons in fighting viral disease. Numerous studies of intensive care patients have shown that many of them produce too few Interferons. Administering strong therapeutic Interferons in the correct therapeutic window can potentially reduce disease progression and, therefore, prevent hospitalisations and even deaths.

On the other hand, there is some concern that the successful role out of vaccines in countries such as the USA, UK and Israel will result in treatments not receiving the priority they deserve. Whilst the development and roll out of vaccines is crucial to end this pandemic, we will still need therapeutics to treat the virus. Vaccines are not a panacea to end the pandemic, they prevent viruses whilst therapeutics treat them.

Given that we are continuing to see virus mutations, it is crucial that governments continue to invest in and develop therapeutics for COVID-19. These will also play a vital role in future pandemics and can prevent the kind of social restrictions which many countries had to endure in the early days of the current pandemic.

LR: What are the benefits of synthetic Interferons and how extensive is their potential use/ what are the opportunities in this area?

WS: Interferons can stimulate hundreds of genes when they are released to cause the production of a tide of proteins essential to anti-viral defence together with many other immune-associated processes in the body. It directly inhibits viral entry into the cell, viral replication within the cell, the release of virions from infected cells and also induces the innate immune response (NK cells) to kill and remove infected cells.

With Alfacyte, we believe not only will it activate the innate immune system and accelerate immune responses but it also primes adaptive immunity to engage at a later stage when it is ready to make a significant contribution.

One of the characteristics of COVID-19 is that it can delay or dampen natural Interferon responses in our bodies, which in turn impinges on adaptive immune activation. This allows the virus to multiply and cause inflammatory responses that can lead to immune suppression and exhaustion. By giving patients an Interferon boost with a therapeutic such as Alfacyte however, we can potentially alter the course of disease progression, effectively creating an ‘immune wall’ around the virus and infected cells and then remove them.

In addition to treating COVID-19 we believe a therapeutic such as Alfacyte will be a vital tool to respond to future pandemics. One of the great difficulties of the current pandemic was that we did not have any viable therapeutics to treat the virus when it first emerged, leading to restrictions and an agonising wait for vaccines. But therapeutics such as Alfacyte have the potential to act as an upstream immediate response to disease outbreaks whilst more downstream adapted solutions such as vaccines are developed.

LR: Are there any challenges in developing this type of therapeutic?

WS: There are always challenges when developing a new therapeutic, especially for an anti-viral treatment which in general have been historically neglected. In the UK, one particular challenge for young biotechs developing promising new drugs is securing funding at an early stage so that you can progress to clinical trials. This has been challenging but we are confident of bringing this treatment to market in approximately 18 months.

LR: What stage are you at with Alfacyte and what are your goals?

WS: We have conducted lab testing with St Andrews University and are currently raising funds to be in clinical trials later this year. Suitable quantities of Alfacyte are now available to allow the toxicity studies to start and the master cell banks are currently being laid down to permit GMP production.

The clinical trials will be Phase IIa trials. This includes testing the treatment in patients who have COVID-19 that will enable ILC Therapeutics to study the efficacy and safety of the treatment. This will then be followed by a Phase IIb trial which will create detailed data with high population numbers.

LR: What do you feel went well with the development of this therapeutic and what areas do you feel could have been improved /could have received more support?

WS: The laboratory studies all went very smoothly as soon as the team were asked to concentrate on the new pandemic –  however, as some of us had been involved in the 2003/4 SARS outbreak, we were fully aware what was required to move this type of project forward. Nevertheless, it would have been advantageous if it had been more generally recognised that new therapeutics were going to be required – this would have allowed more funding opportunities.